Battle of Wakefield - 28mm War of the Roses wargame - part 1

- in anticipation of lockdown restrictions easing up in England tomorrow we have started to turn our attention to the next round of the War of the Roses campaign. As a reminder the players in the Shed have decided to recreate ALL the battles of the the Wars of the Roses in chronological order. Our last game focussed on the small battle of Worksop (report HERE) and is now to be followed up by the dynasty shaking Battle of Wakefield.

We cannot wait to get those dice rolling again !

Detailed below is a short background to the battle and the orders of battle. This morning I took the opportunity of setting up the table.

The real  battle was fought in the month of December so it is a perfect opportunity to use my new grass terrain mat with added snow.

In the picture below you can see the heavily outnumbered Yorkist Army camped outside Sandal Castle facing the Lancastrian forces. Wakefield bridge the exit point for the Earl of Rutland is in the foreground. 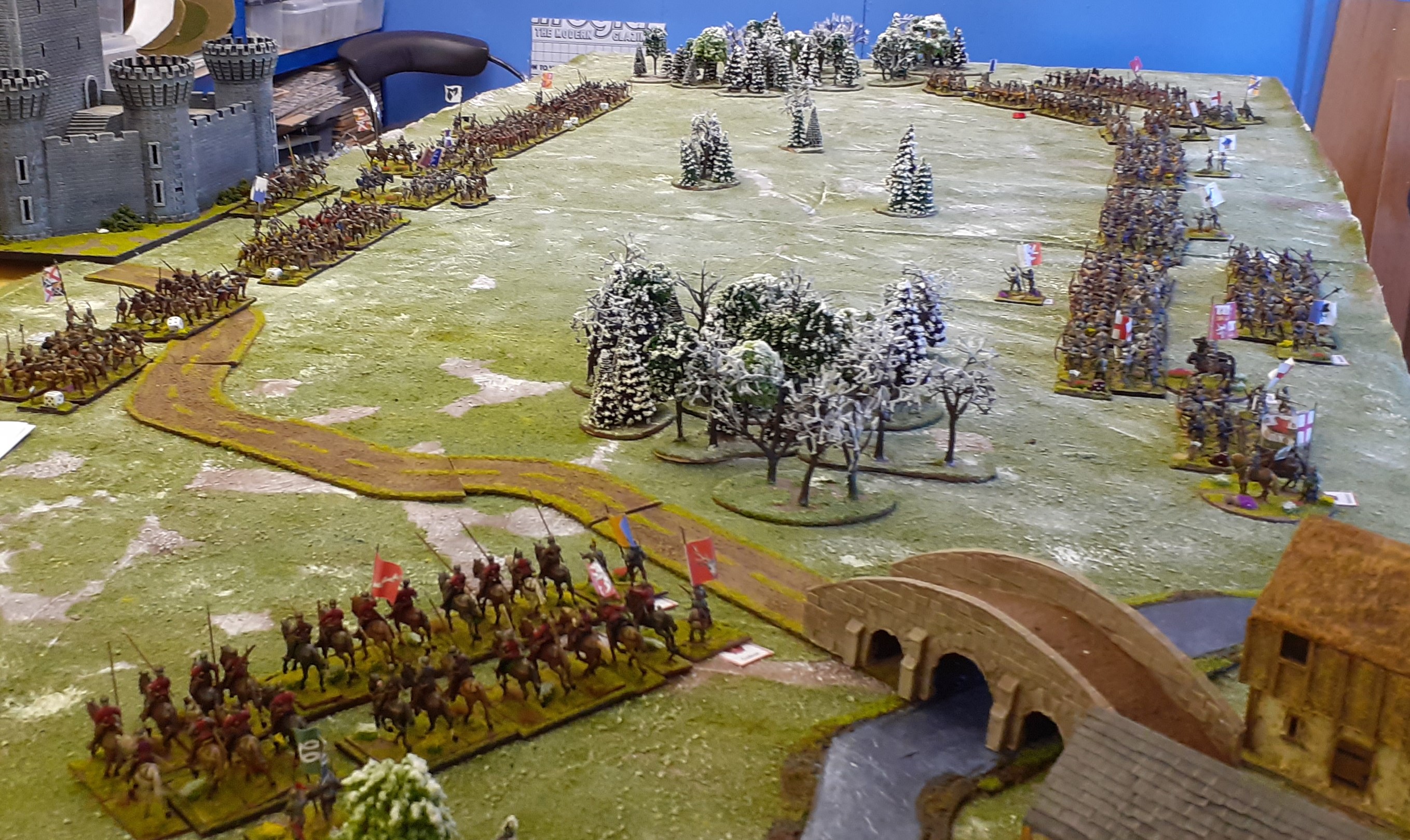 Background to the Battle of Wakefield

In December 1460 Richard of York, along with the Earl of Salisbury (Warwick's father) travelled North. This was quite possibly in response to reports that Margaret of Anjou was in Scotland attempting to garner support from James III the King of Scotland. Warwick remained in London and Richard’s son, the Earl of March was sent westwards into Wales to raise troops along the Welsh border.

By the middle of December York had reached Worksop (some 40 miles south of Sandal Castle), it was here that in a skirmish York was beaten by the Duke of Beaufort (Lancs). Little evidence remains of this ‘battle’.

Following this engagement Richard continued north and by Christmas had reached his stronghold at Sandal Castle just outside Wakefield.

By now York must have known that a sizeable Lancastrian army was now forming close by at Pontefract (less than 9 miles from Wakefield) under the command of the Duke of Somerset. The town of Pontefract at this time was supposedly loyal to the Yorkist cause so it is certain that supporters of Richard of York would have informed him of their presence.

Given this relatively short distance it is my view that both sides must have been aware of each other’s presence and regular scouting parties would have had each other under observation. With no support from the 'London based' Warwick in the immediate future, Richard may well have been expecting support to arrive from his son, the Earl of March, around this time. It is believed that March wintered in Shrewsbury (some 100 miles south west of Wakefield).

On December 30th 1460 Richard of York was attacked by the forces of Somerset. His forces were routed and he either died in combat or was executed shortly afterwards.

There is much conjecture why this battle actually happened, these include

2. He left the castle to rescue a foraging party

3. He left to rescue his seventeen year old son, the Earl of Rutland (captured and killed on Wakefield Bridge)

4. He believed that a relative of Salisbury – the Earl of Westmoreland was going to betray the Lancastrian cause.

Having considered the facts my view is that Richard had no choice but to give battle - there was no other choice as the Lancastrians assembled in front of him.

Richard’s forces numbered around 6000 men. I doubt very much that these troops would have all been able to occupy the castle and as such a large encampment would have sprung up outside the fortress. This camp would have contained all their winter supplies.

The Lancastrians under Somerset may well have been able to march from Pontefract in a day and as such this would have given York little time to evacuate his smaller army in good order. If he had had the time surely he would have headed south west towards his son, Edward, the Earl of March but this was winter and supplies would have been somewhat scarce for an army on the move. I would also add that the retreating army with its baggage train would have been much slower and harder to defend than the static position at Sandal Castle.

With the sizeable Lancastrian force advancing on Sandal Castle (estimates suggest around 10-15,000 men) Richard probably did what any other experienced commander would have done – attack before the enemy could form up in battle. Richard’s pickets would have surely given him advance knowledge of this movement of enemy troops affording him the time to prepare his forces and array them for attack.

Richard’s issue however was that he was massively outnumbered and had no significant defensive position to hold.

Unfortunately for him the Lancastrian army did arrive in good order and the ‘ambushes’ commonly described may well have been successful flank attacks as the battle raged.

The Battle took place in the area between Sandal Castle and Wakefield to the North. This distance between the Castle and the Bridge at Wakefield is no more than two miles and the height of the castle would have given Richard full visibility of any Lancastrian troop movements. Furthermore it is winter and as such any hidden movement from tree cover would have been minimal given the lack of leaves.

During the course of this battle the Earl of Rutland (perhaps on his father’s orders) may well have attempted to escape via the bridge at Wakefield.

Refighting the Battle of Wakefield

With numeric supremacy it is a given that the Lancastrians will most certainly win this battle but to achieve victory they must secure the following objectives.

Capture or Kill both Richard of York and the Earl of Salisbury - both these commanders are attached to their personal men at arm retinues (see order of battle) for the entire game. If these units are routed or wiped out the characters are assumed captured/killed.

If the Yorkist army is defeated and either York/Salisbury are still on the table the Lancastrians do NOT win the game it is classified as a draw.

Finally the Earl of Rutland must escape the table - he may do so anywhere along the northern edge of the table. Rutland is part of a unit of full heavy horse - if the unit is wiped out/routed it is assumed Rutland has been killed. The Yorkists win the game if Rutland escapes.

These conditions effectively mean the Lancastrians have to go hell for leather on a crushing victory whilst at the same time ensuring Rutland does not escape.

Given the size of our games we have decided to introduce the concept of Battle Commanders into our games. These are still leaders with all the features described in the standard NMTBH rules however Battle Commanders may command any friendly unit on the the table in addition to their own retinues.  Battle Commanders are still given a rating, they may enter combat and can still be killed.

Estimates for Lancastrian forces start around 11000 men whereas Yorkists are believed to have had a smaller army of 5000 - 6000 men.

The following table gives a figure ratio of around 1:26 and points for the Lancastrians are 83% larger.

Up next - the refight of the battle of Wakefield - can Rutland escape - will York and Salisbury survive?

The link to the refight when available will be here..

Which can now be found HERE