If truth be told the American Civil War is not a period in history that I am particularly interested in. I have tried to analyse why this might be the case but I continually fall short of a comprehensive and valid reason. From a wargamers perspective I do feel it is a little sterile – volumes of infantry marching into one another and doing their very best to wrestle control of the battlefield. As a precursor to the Great War of 1914 (another period I find little favour with) it was a massive tragedy in human cost but did redefine the world we know today. Why am I rambling on…?

Well on Monday night my good friend John offered to run a game in the shed (using his excellent figures and terrain) and who was I to refuse? To be honest it was a relief that another of the shed wars gaming group was willing to ‘host’ the evenings event. Knowing that Mark (my regular gaming chum in the Shed) is particularly obsessed with this period I could certainly count on his support for such an event. Our foursome was made up with the redoubtable Rolf still sporting his shorts in this particularly cold spell of weather.

John had decided that we would refight the engagement of Wilson’s Creek. This was an historic battle set in the early part of the war in the western theatre with both sides were relatively inexperienced and indeed some of the rebels arrived at the battle without guns or ammo.

We used Black Powder rules as set out in the Glory Hallelujah supplement recently released by Warlord Games. All the figures are 15mm (apologies don’t know the manufacturers)

Of course I had to raise the Union and Confederate Flags on my flagpole. Not to sure what the neighbour's think about seeing the banned Southern Cross

The following photos tell the story as the game unfolded

The battlefield with the Union to the left of the picture

The Confederate brigades advance on their right flank...

Union troops await in the Orchard

The Rebels advance to the creek

A single Union battalion looks on

The Confederates push up on their right flank

The creek is crossed and the rebels surge forward

Furious fighting erupts along the line

More Union batteries on the hill - they proved rather ineffective

Meanwhile the Reberls are forcing the Unions left flank...two battalions are pushed back into the orchard

Battle breaks out across the table

The rebels have almost broken the centre - one last push

The push is successful...

Rebel skirmishers advance on the guns on the hill

The Union line is starting to waver

The Union is broken - a victory for the rebels...

A big thank you to John for a great game....

Salute 17 - My haul and observations

So Salute 17 is done and dusted - and as before I have uploaded all my photos of the games in a previous post and this can be found here.

Judging by the number of visitors to my blog this was a popular post with the latest count showing around 2000 hits, mind you the previous two years saw over 5000 hits and are by far two of the most visited posts on this blog.

Does the drop off in traffic signify anything - possible not but we'll see over the next few weeks?

I managed to get up to Excel just as the event was opening - I grabbed my goody bag and headed into the show. Fearful that the bits I wanted might disappear I decided to do my shopping first. Rather cleverly I had packed a very large carrier bag to haul away my goodies. In no particular order I procured...


A rather expensive and splendid haul.

If you are wondering how the painting is coming on with my Napoleonic project I can report that so far I have finished six British guns and their teams and almost 75% of the 10 British line battalions (that 240 figures) - I'll be posting these on the blog in the next week or so.

So onto my thoughts about Salute this year...

Firstly a big thank you to the South London Warlords for their efforts in making this such a great event. Their dedication and support is greatly appreciated. The new electronic ticketing makes all the difference compared to previous years.

Plenty has been written about the venue but I for one think its a great location. The transport links are great (door to door in an hour) and the venue concessions for food are plentiful and are in line with typical London prices. Yes the lighting is poor and the floors hard but as a seasoned visitor of trade and exhibition shows in my line of work Salute only really suffers because the traders dont operate from custom lit stalls and booths. Ours is not a rich hobby and I understand that the outlay for the stands at Salute can cost a pretty penny.

I noticed three key things at this years event...

1. There is most certainly a continued drift away from historics to scifi and fantasy and as such gone are the days where we see several large tables filled with glorious armies marching to the sound of drums. We are now faced with small boards and a few figures in skirmish mode. This is sad but I think reflects changes in society. Very few people have the energy, money and time to paint thousands of figures   - its more about that instant need for gratification. There is also clearly a storage issue and I am aware that not many folks have a 'Shed'

That does not mean to say historics have had their day - if the sales of Warlord and Perry are anything to go by I think these genre's are in rude health. Its just that they are rarely seen en masse at these types of events.

I believe that many folks don't want the trouble to lug their precious hordes of painted armies to a show. Sadly things get broken (or even worse stolen). The cost, effort and payback just don't equate. I gather that the games hosts only get a free ticket - yet their transport costs and other expenses are not even covered (apologies if I am wrong).

Personally I would love to take one of my Shed Wars Games on the road but I'd need certain provisos to me met...including travel and parking expenses covered, insurance costs and a budget for food and drink as an absolute minimum.

2. My second observation (and perhaps linked to the first) was that I felt the number of 'quality displays' compared to previous years was significantly dowen. There were were some great tables but also some very average ones. This show should be setting the bar higher - this is the pinnacle of our hobby and with the plethora of terrain designers, manufacturers and stockists out there there should really be some stunning eye candy to see. A couple of years ago I was lucky to visit Tactica in Germany - this was a marvel and Salute has a long way to go if it wants to replicate what has been achieved in Germany

3. My second observation was that I felt the show was packed - indeed perhaps too many people and yet when I was leaving around 2pm the numbers had fallen dramatically. Perhaps Warlords could look at two ticket types - the standard and an off peak version (ie gets you in at at say 1pm ) - this might help to stagger the crowd and give those traders more time to talk to the public.

What I did notice about the crowd was that there was noticeably more 'younger people' than there perhaps has been in the past. When I say younger I mean below 30 - this can only be good for the hobby but also reflects the growth in Sci Fi and Fantasy.


So as I finish off this post I have one last thought.....

Given Salute ids the largest event of its kind in the World (please correct me if I am wrong) should the industry be looking at using these event to congratulate and praise all those in this hobby for bringing it to life.

Why not use the event to launch and deliver an 'oscars of the hobby' - lets not just have prizes for figure painting but also prizes for best ranges (historic or otherwise), best service, best sculptor, best manufacturer, best websites, best blog, personality of the year, life time achievements etc. Surely the magazines we have out there along with the various forums could each 'sponsor a category' and capture votes through the various social media.

A big thank you to the South Warlords for organising the event. 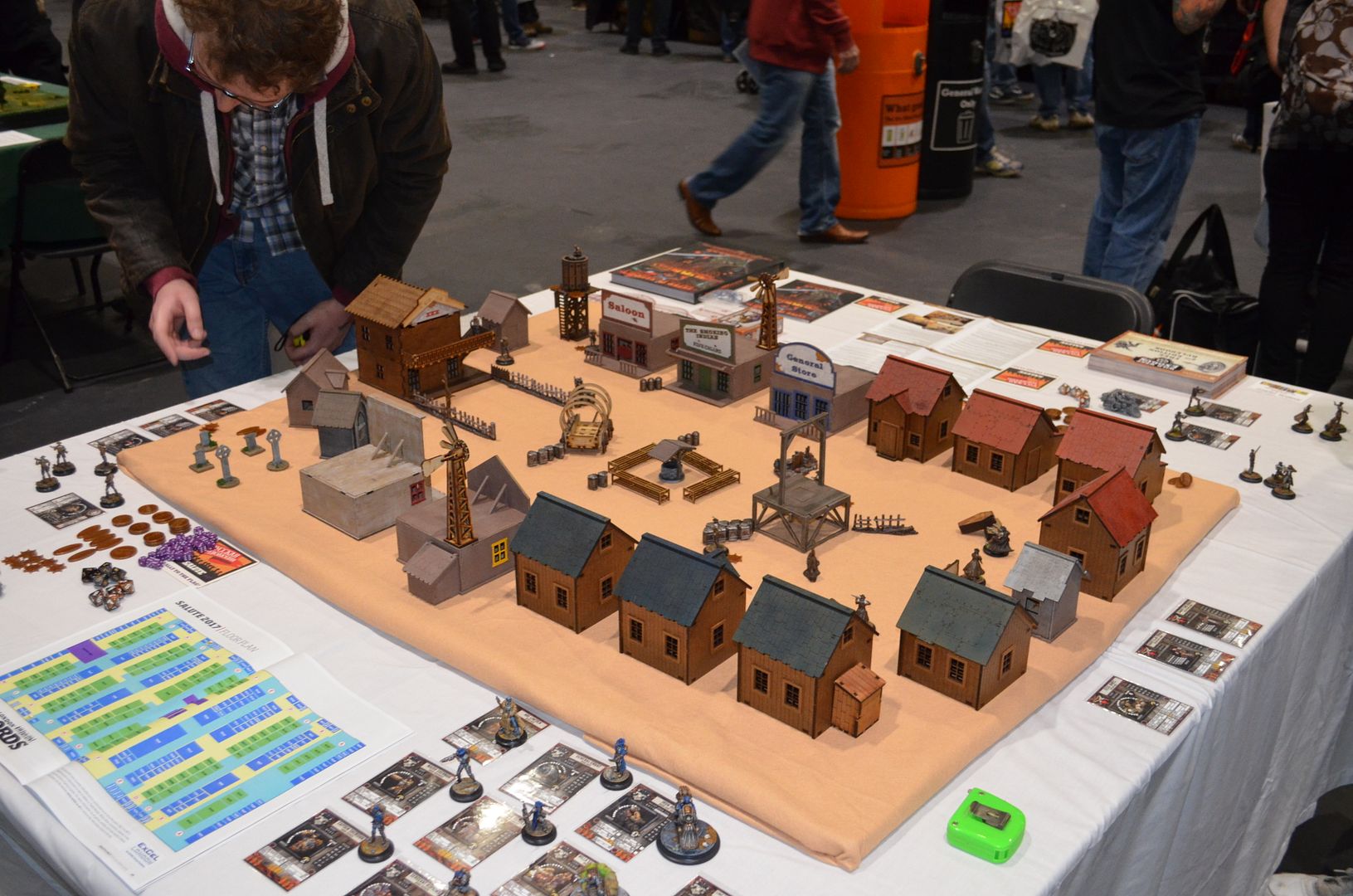 and that's it folks - over 100 photos of wargaming joy