With the somewhat mild weather bathing southern England into a false sense of an early Spring I threw open the doors of the shed on Monday night for a small colonial dust up.
Having recently strengthened and rebased by Dervish Army (see below) I thought a engagement in the Sudan might be a bit of fun. Reading through some various books and internet sources I settled on a re-enactment of the Battle of Ginnis.
The Battle itself was a rather small affair at the tail end of the Sudan campaign but it is perhaps best known as the last battle British troops wore their red jackets into action. I am not going to bore you into a full history and background to this action but if you are interested in more reading a great link can be found HERE

In summary the British have been tasked with clearing two villages alongside the Nile and a known Dervish camp to the north of the second village (Ginnis). The British have been formed up into two infantry brigades and one cavalry brigade. To support the action a gun boat armed with a machine gun is shadowing the land forces as the move forward.

A Map of the Action can be seen below 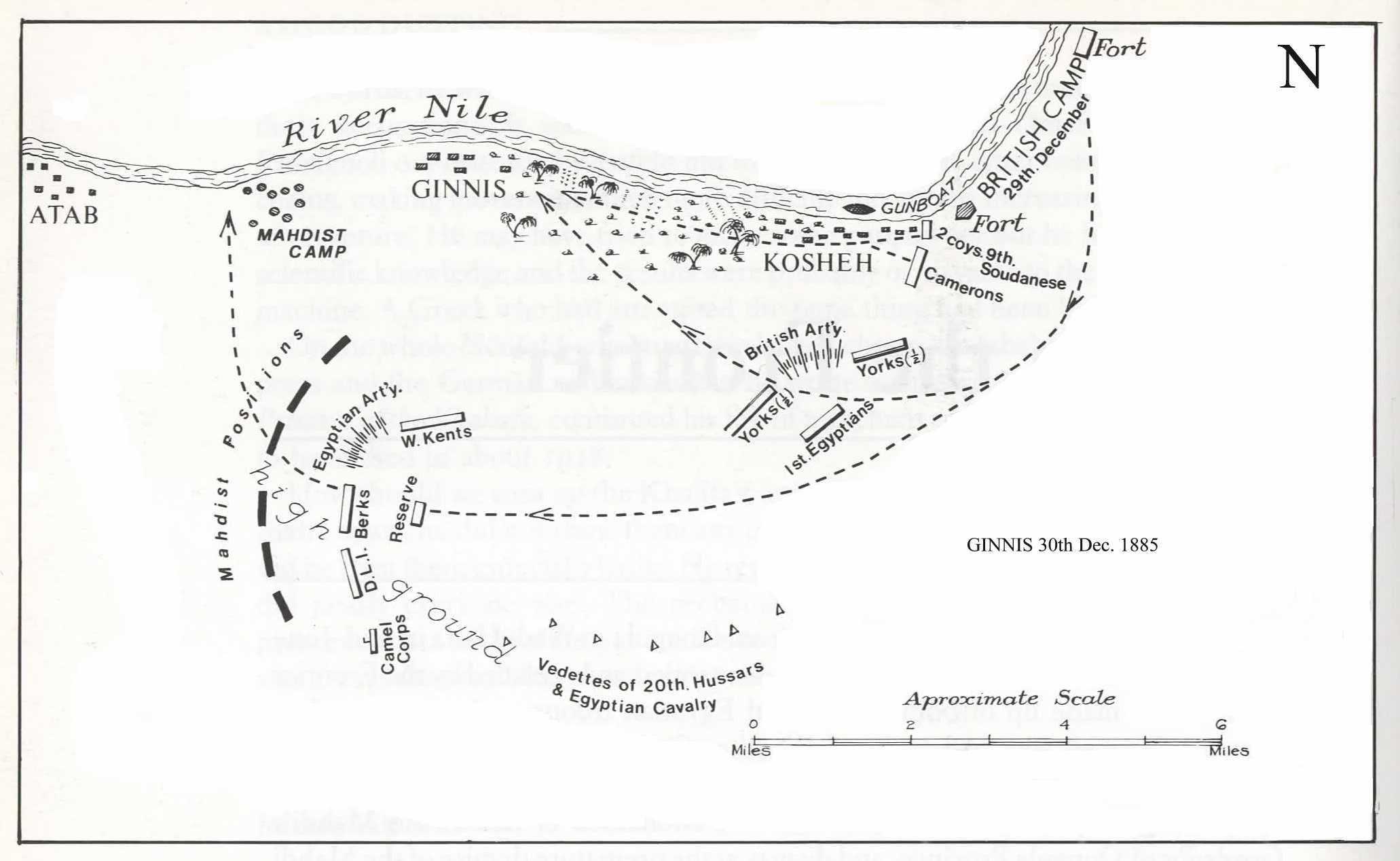 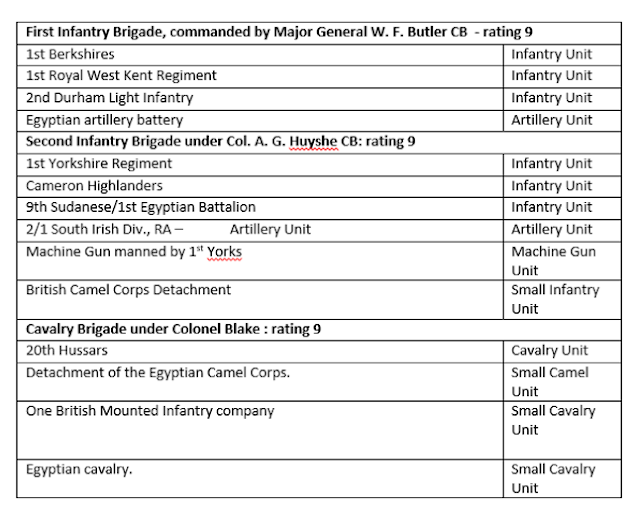 The British Forces are estimated to be around 3000 men

The table has been set up with the Nile running West to East - the British are approaching from the far end, The two villages are on the banks of the Nile and the Dervish camp is bottom right. 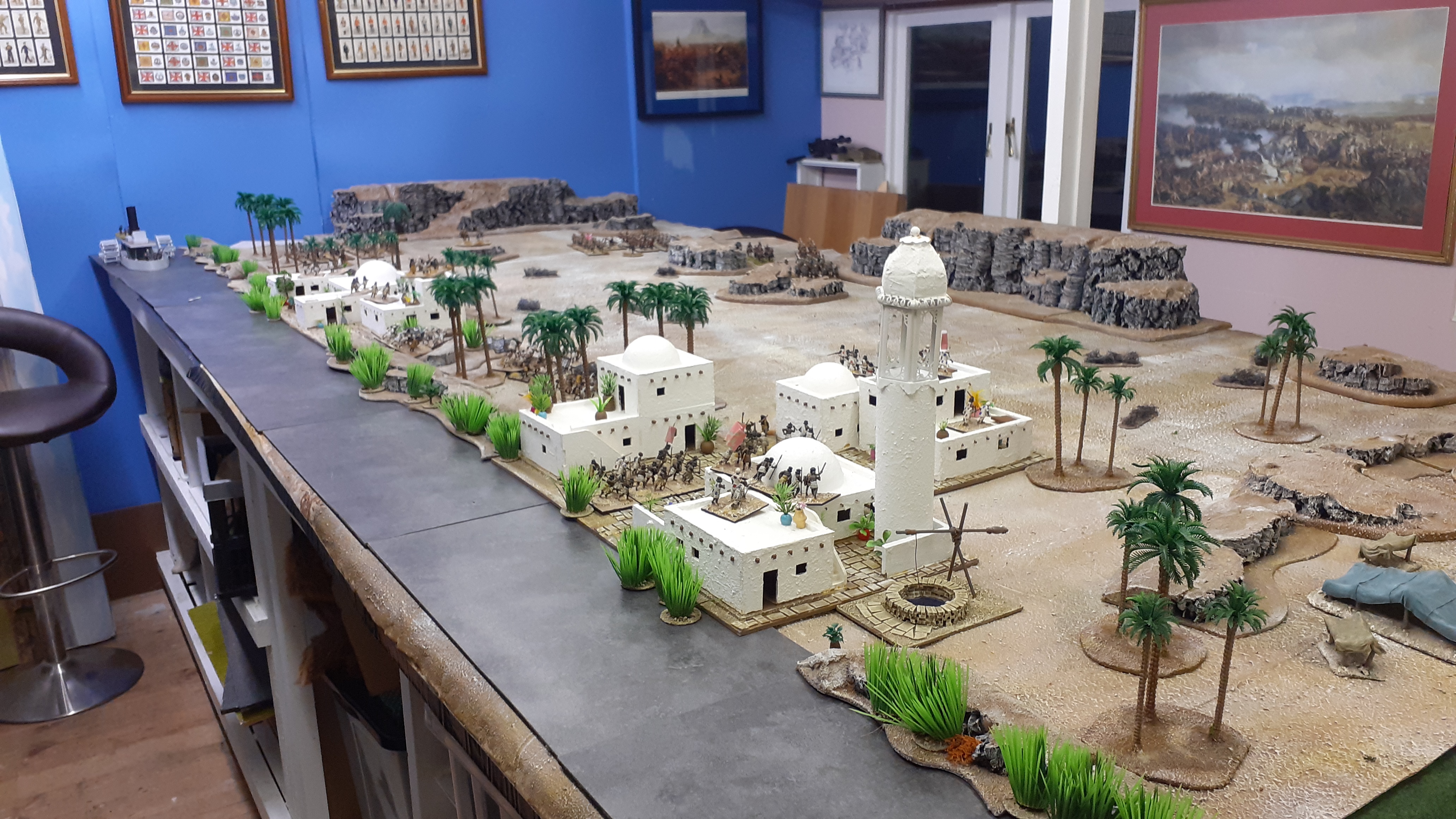 Estimates for the size of the Dervish force vary but I have taken the 6000 listed in the excellent Mike Snook book on the Sudan. With twice the number of troops that the British I gave the Dervish 50% more units. Their order of battle is as follows - all Dervish commanders had a rating of 8
The Forces in the Villages and between start on the table. The Dervish camp rallies in turn 2 with the Cavalry brigade emerging first in turn 2 followed by the infantry command in turn 3. 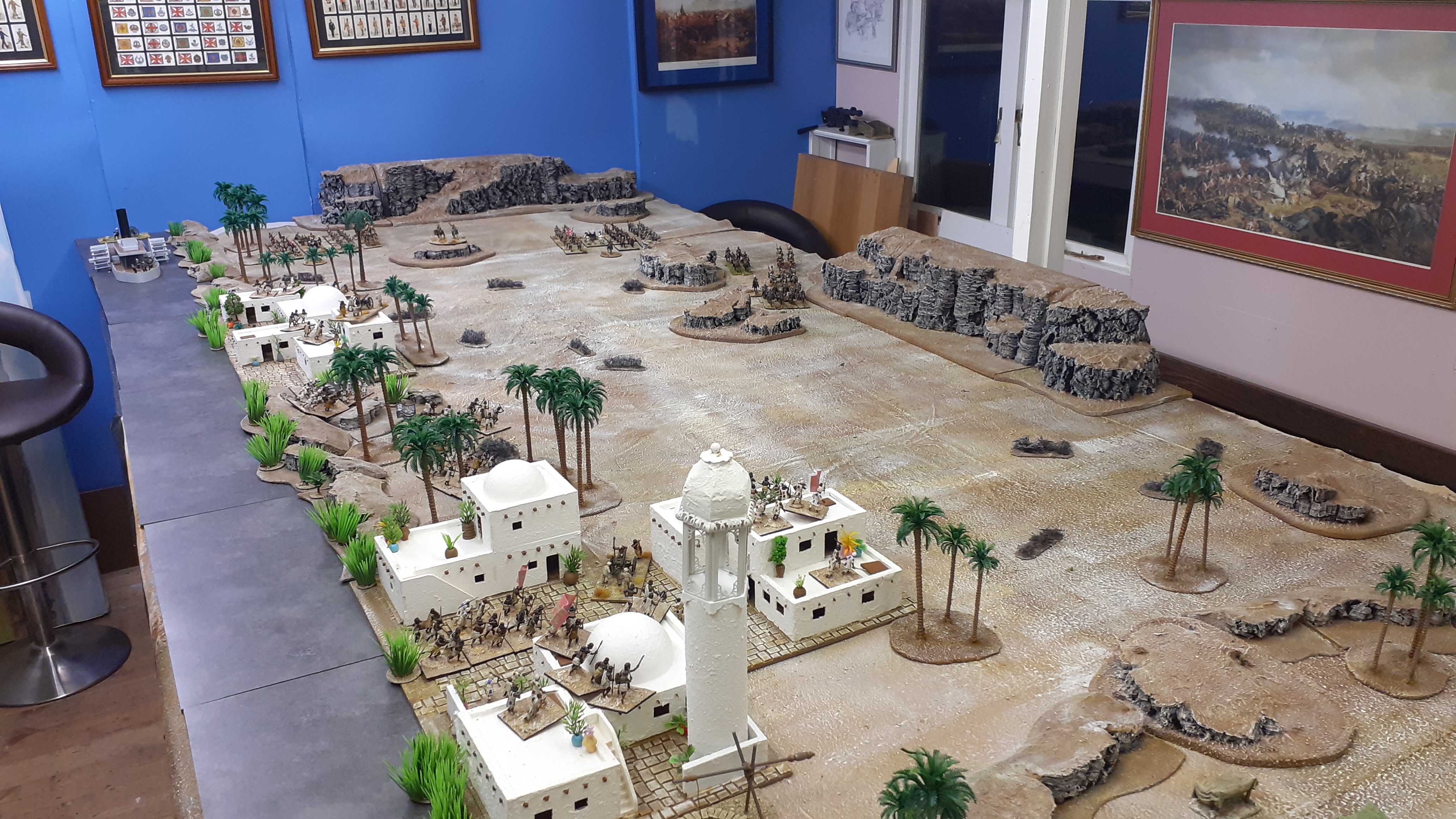 We originally intended this game to be 2 v 2 but sadly one of the players dropped out so Mark and Vince lead out the brave British forces and I would command en masse the Dervish force.
What happened next was a story of disaster....
The British forces were lead out by the Cavalry brigade... 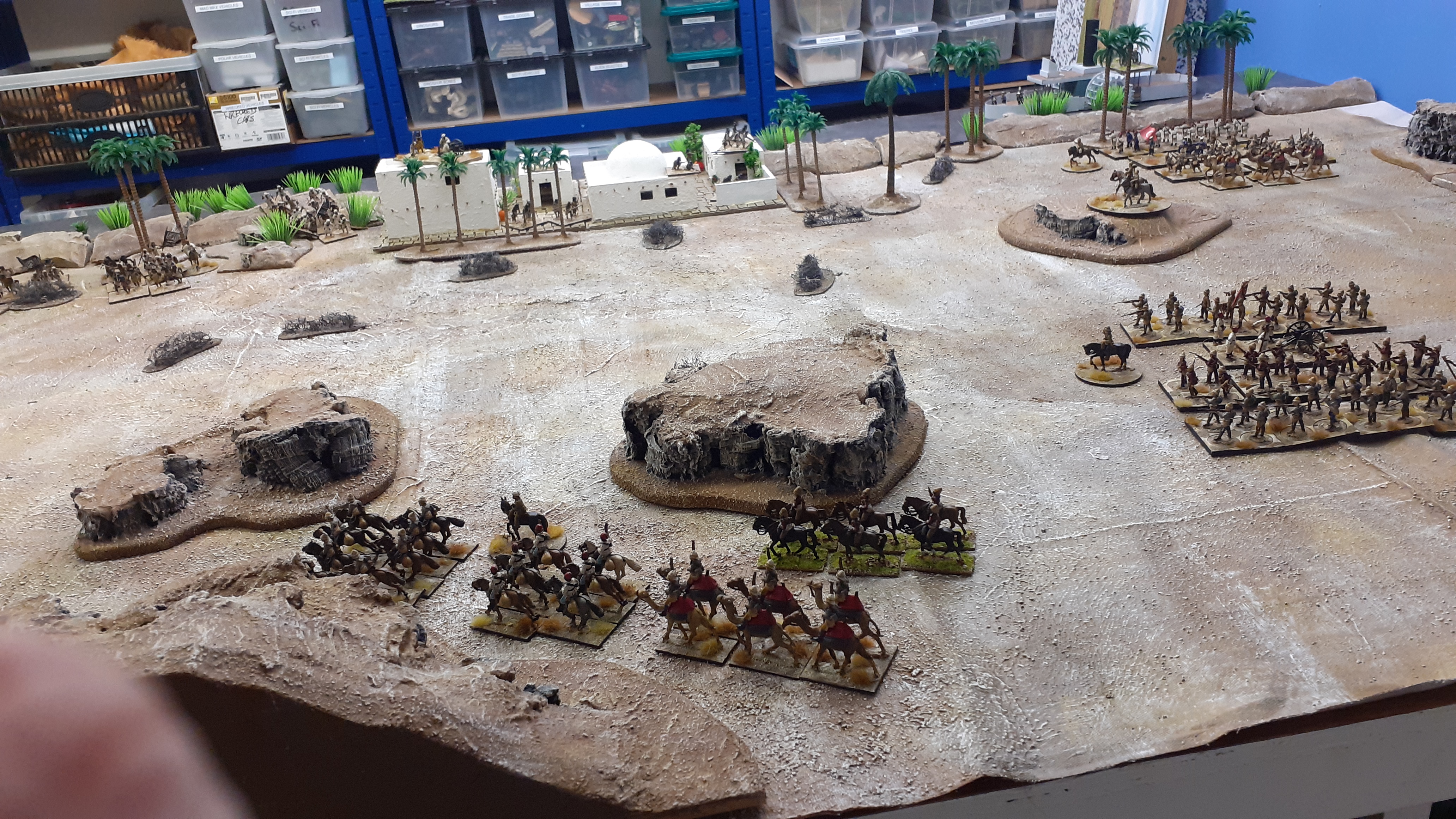 Followed by the First Brigade of Infantry. I think it was theoir mission to clear both villages quickly before tackling the main Dervish force at the encampment 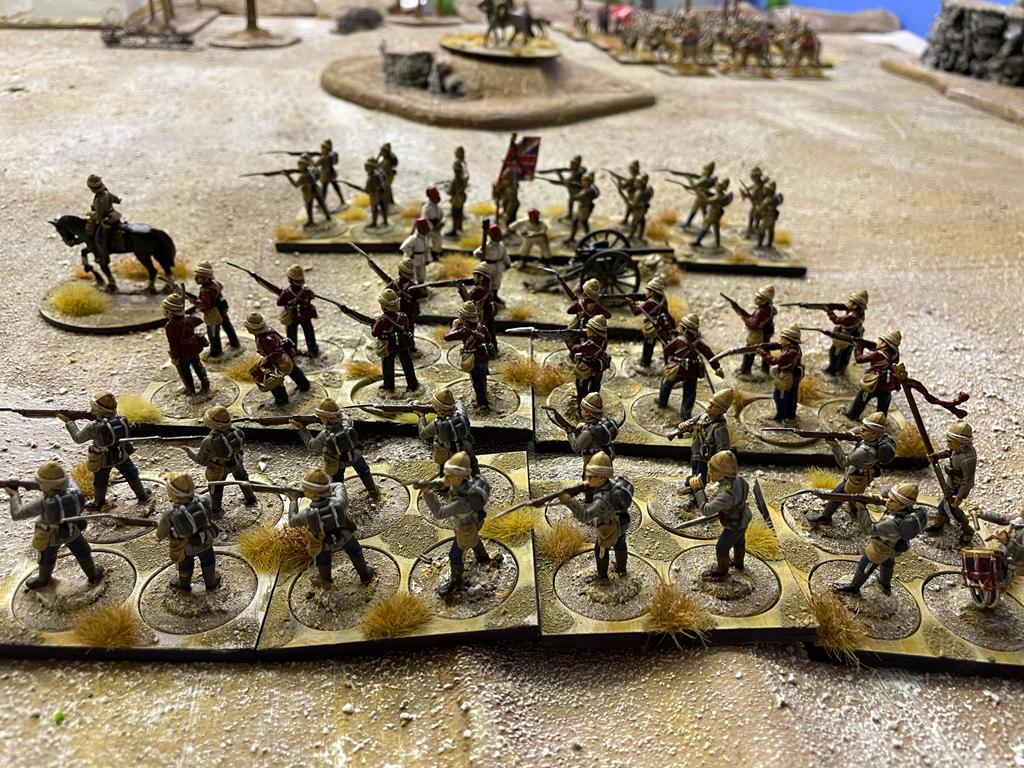 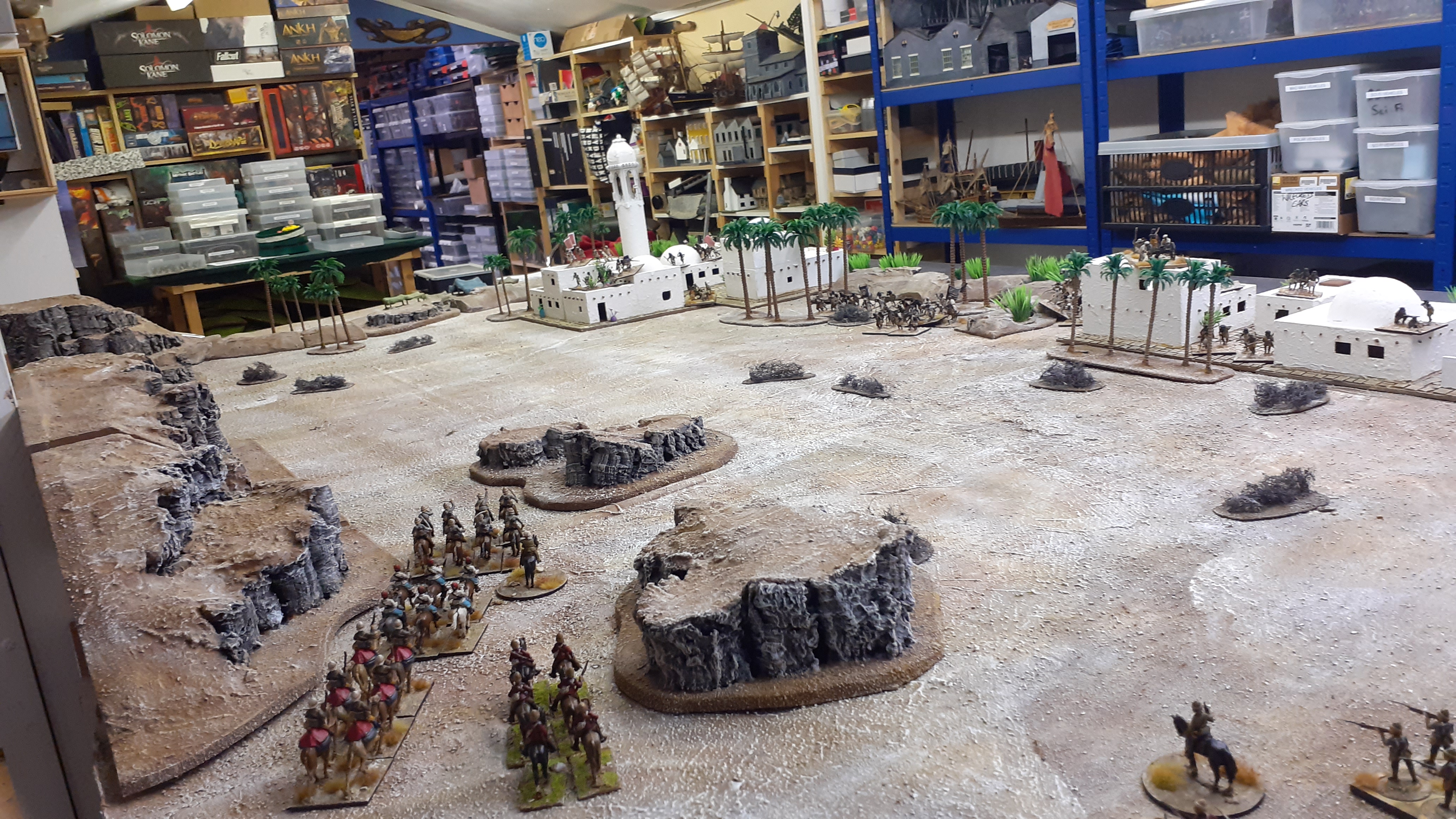 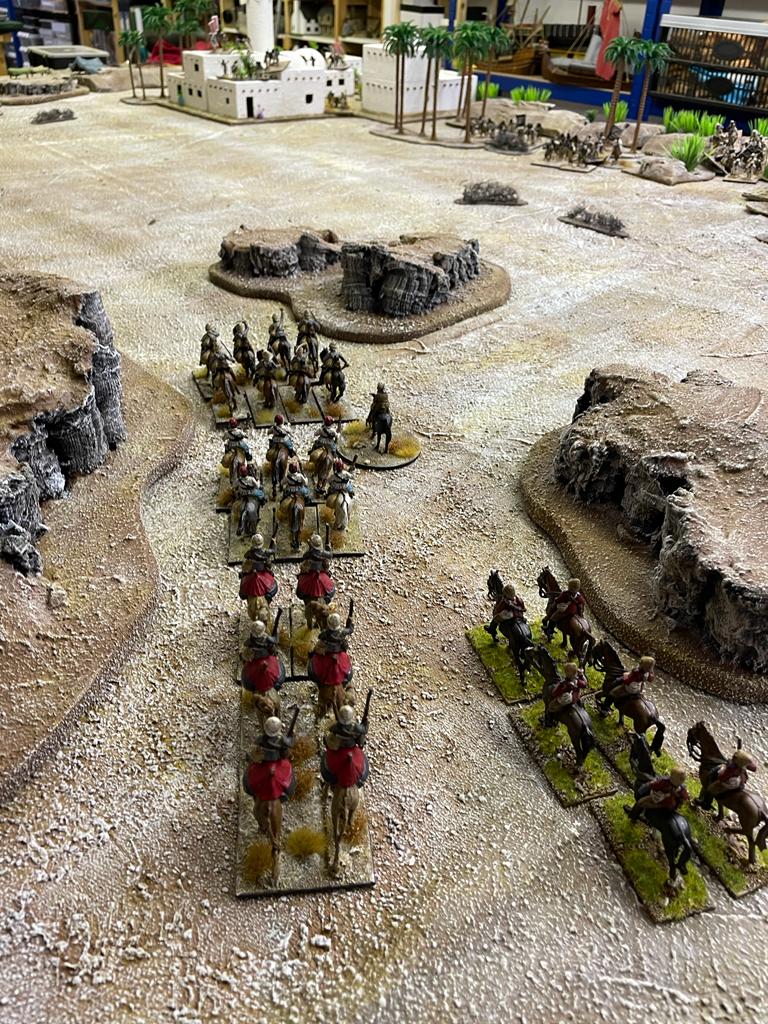 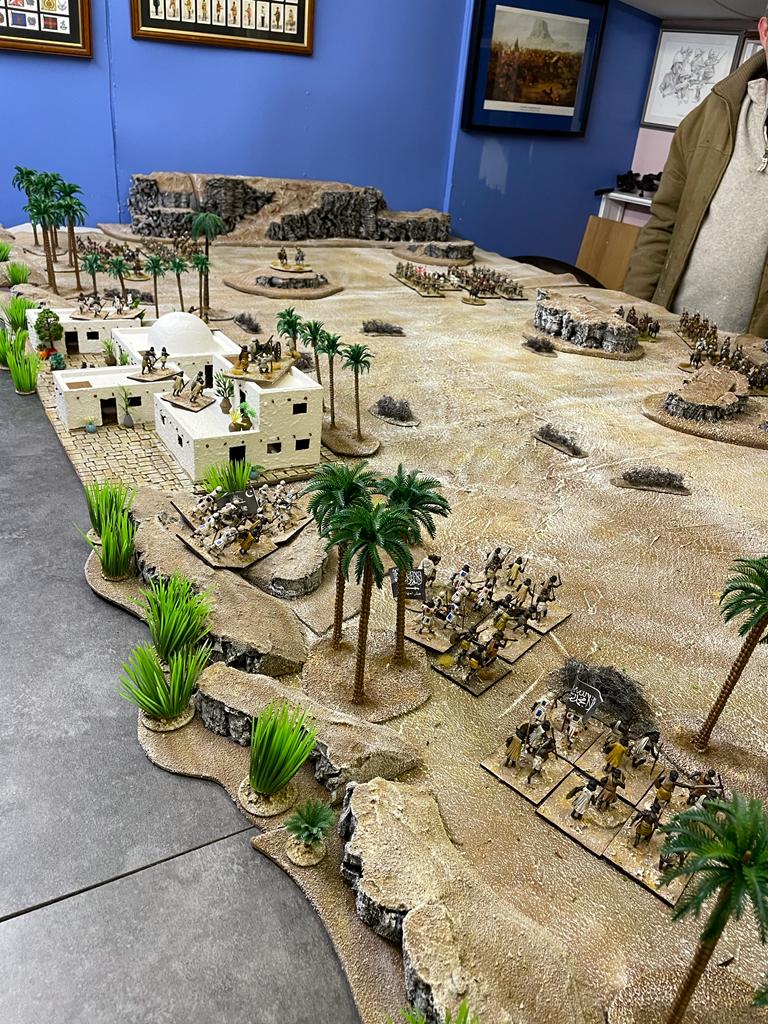 By now the second brigade complete with artillery, camels and machine guns was enetering the field. 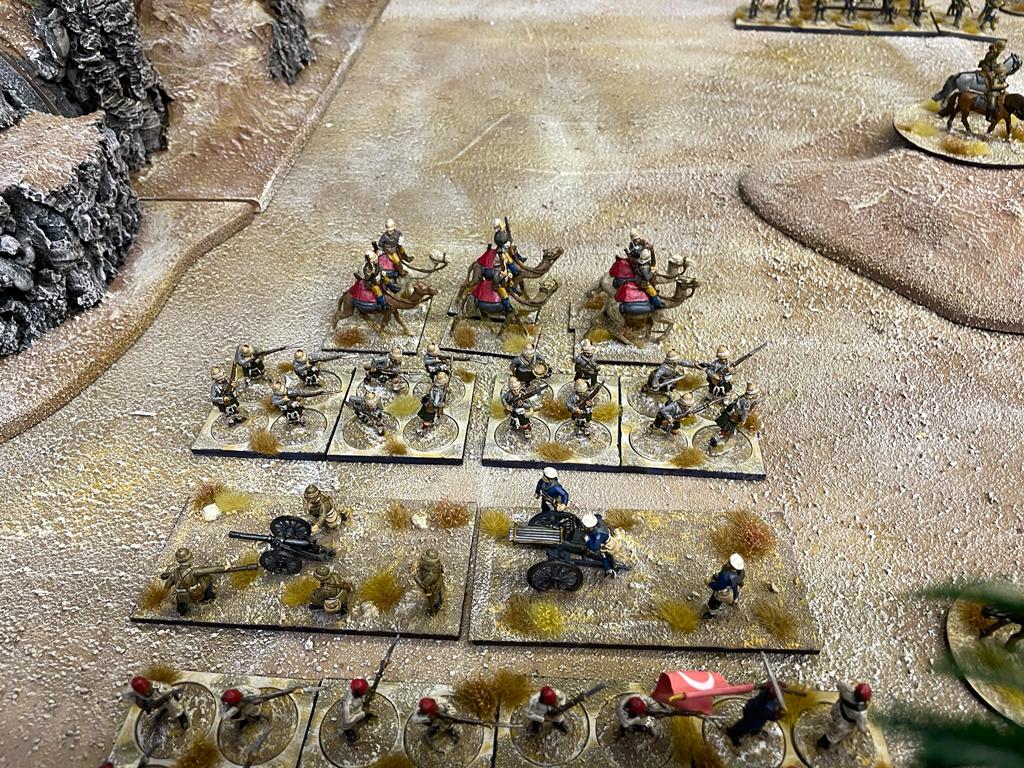 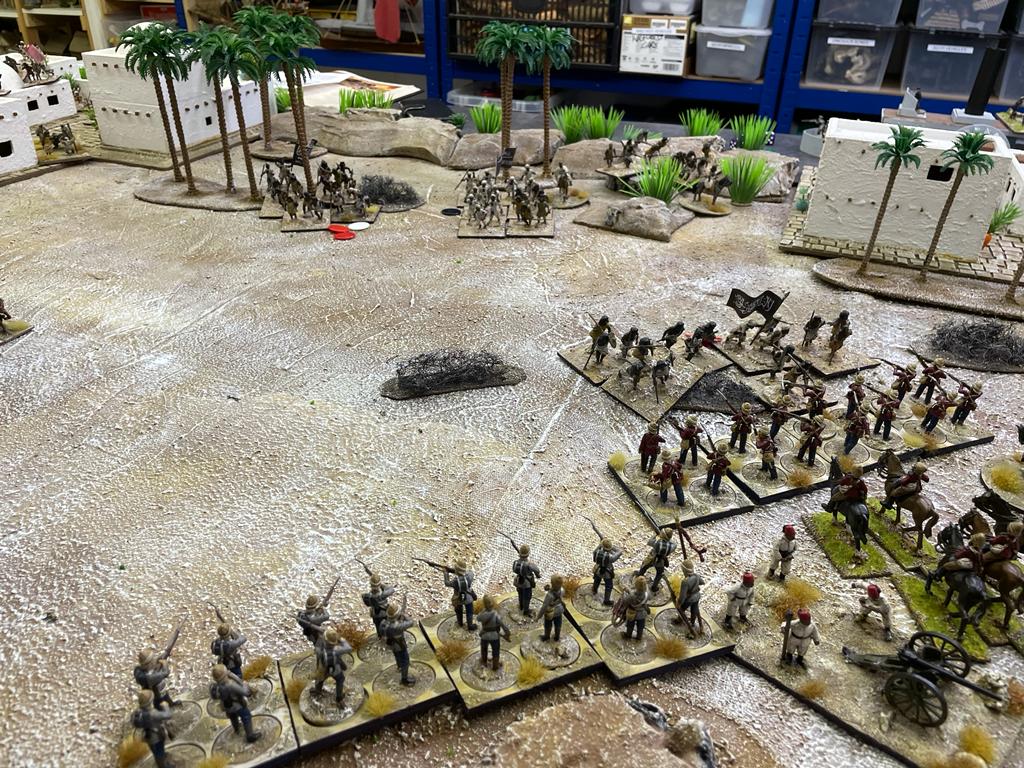 The Local tribesmen duly obliged and charged forward  - quickly routing a small unit of camel corps and driving back the mounted infantry. Such insolence would not do and the British quickly pushed out a firing line of regular infantry. A couple of volleys should sort these fuzzies out... 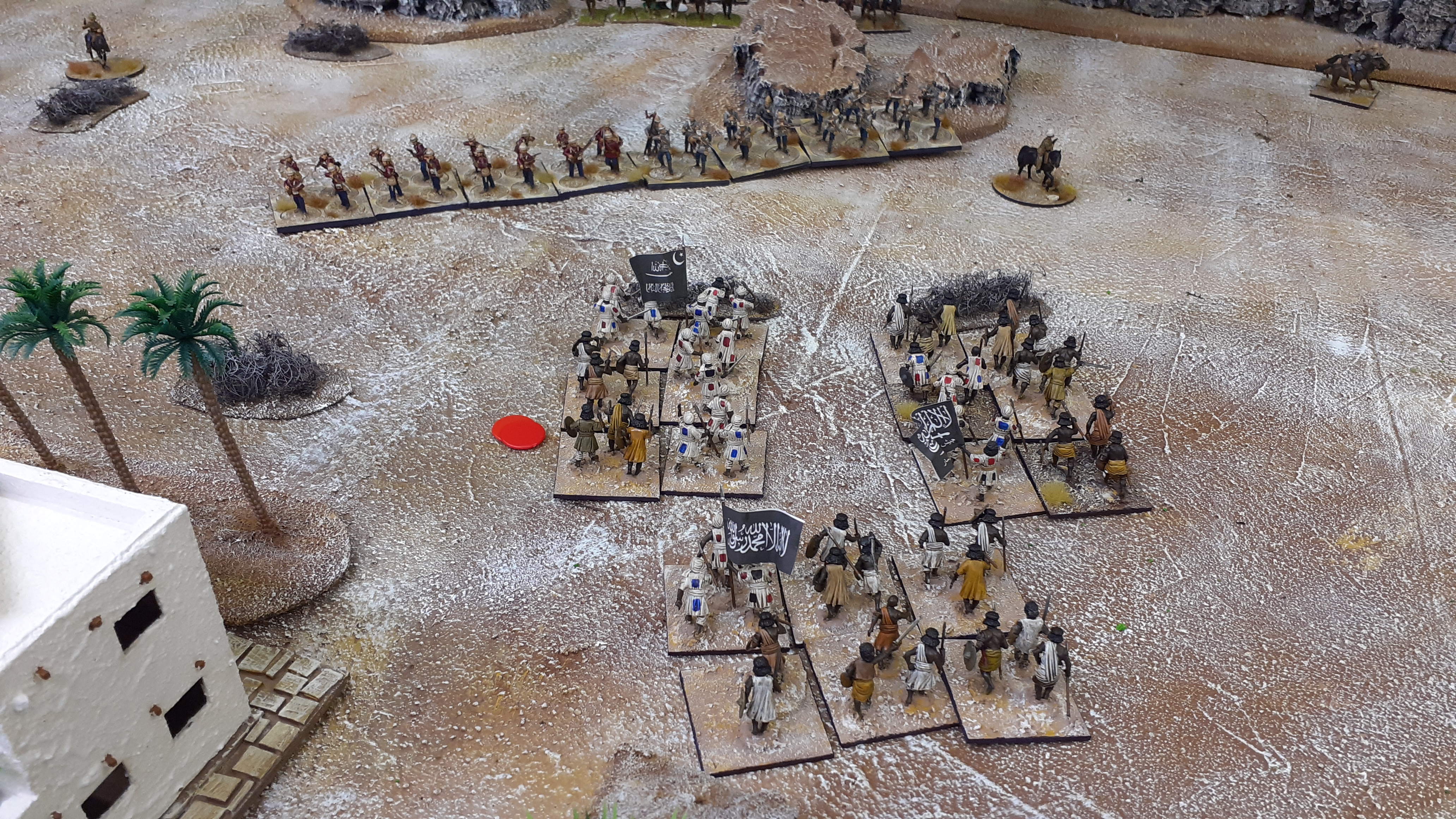 Well that was the plan but clearly no one had told the locals, a second charge quickly routed the first unit of British infantry and if it wasn't for a heroic blunder charge by the British mounted infantry these Dervish's may well have gone onto greater things. As it was the remaining Dervish units in this tribe were quickly mopped up and proceeding could carry on. The loss of one Battalion could be hushed up in the reports... 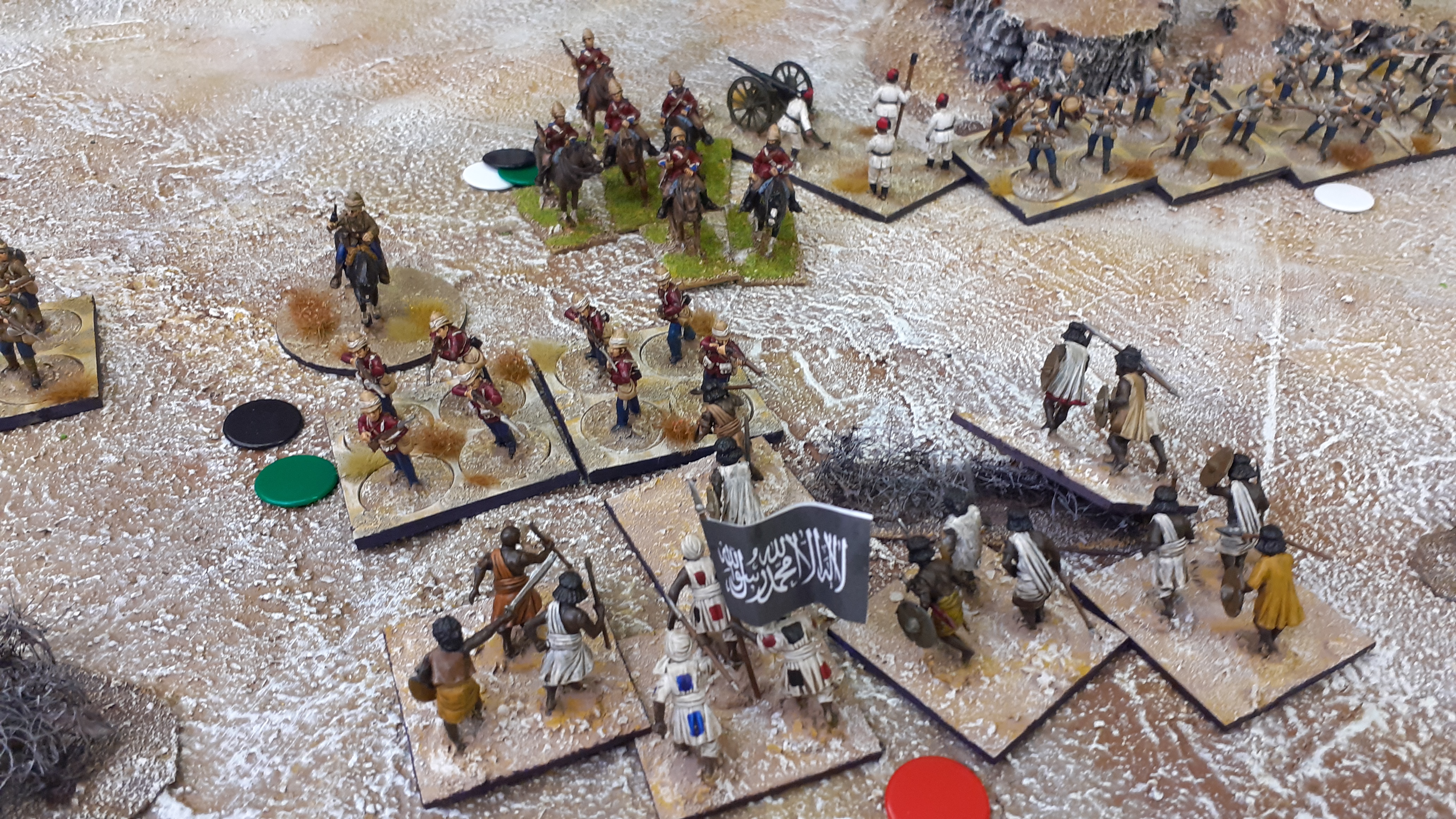 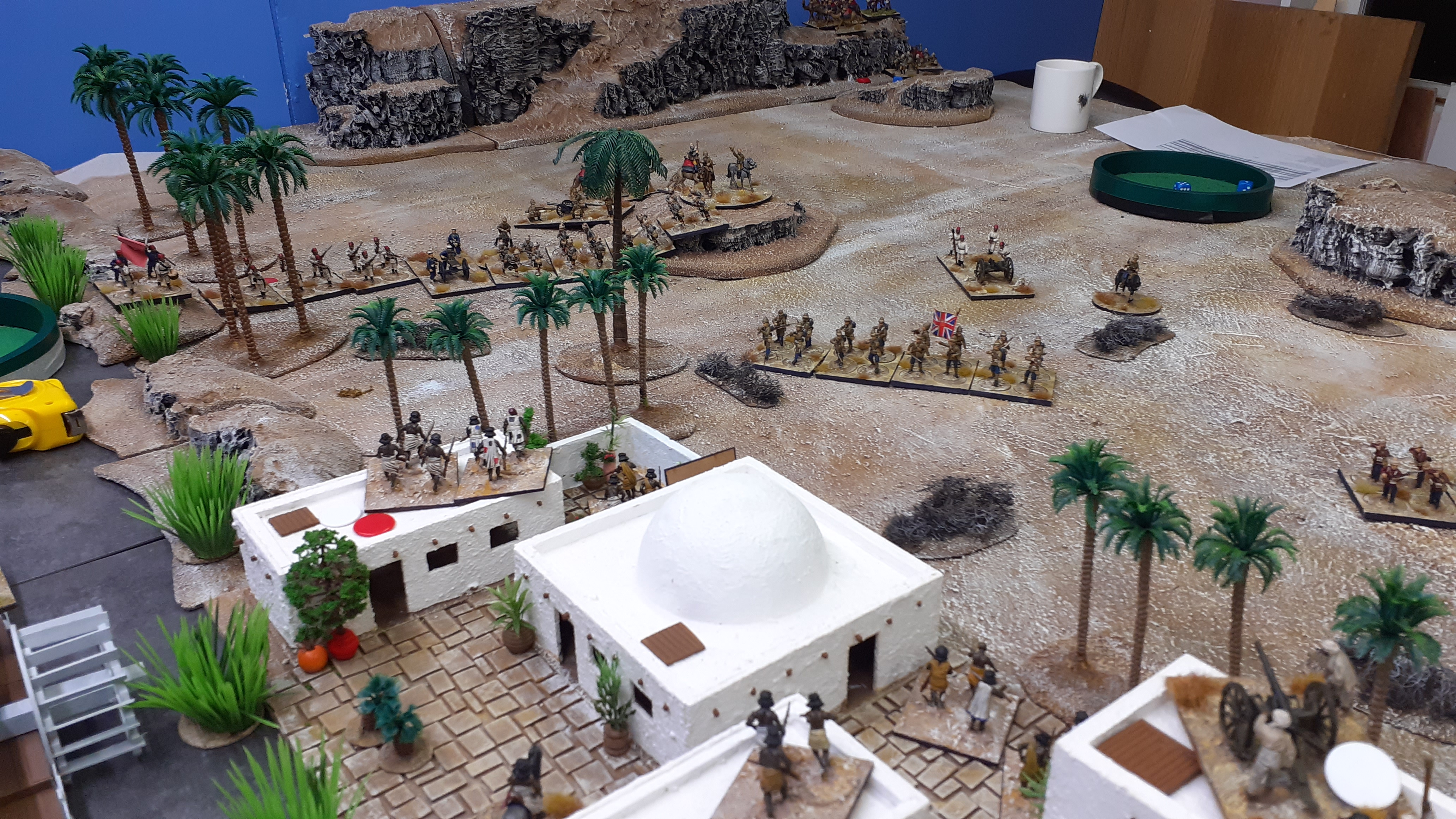 The gunboats machine gun support was most welcome 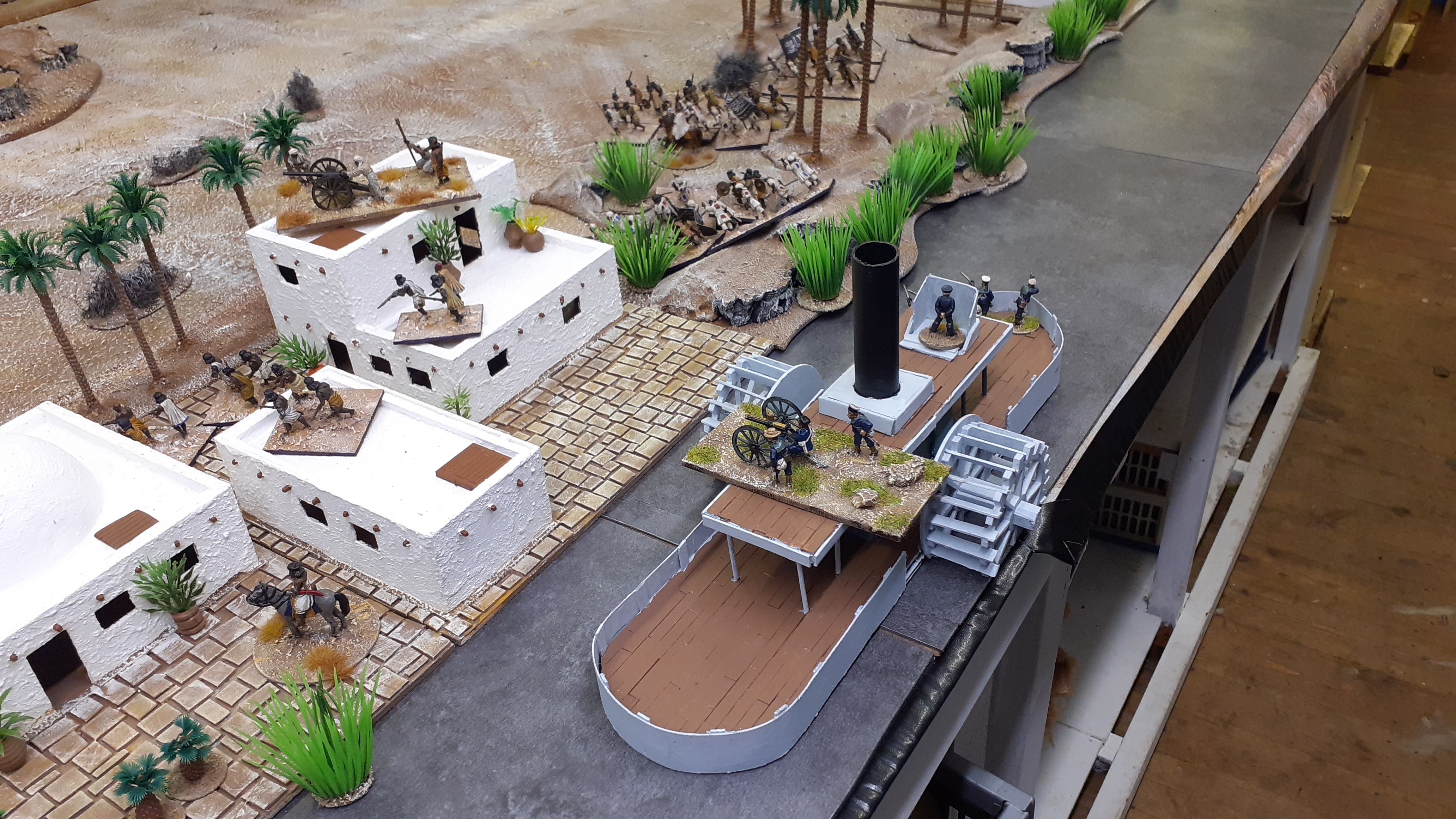 As we moved into turn 3 the Battle started in earnest. Flooding out of the encampment came the main Dervish force. Lead by its cavalry they surged across the table with a full three moves. As the Dervish commander I somewhat screwed up here and moved these chaps 36" when I should have moved them 54". Had I of taken the extra 18" the Dervish cavalry may well have run riot amongst the British line.
My cock up gave the Brits a chance to dress their lines and give a volley or two before my cavalry would enter the fray. 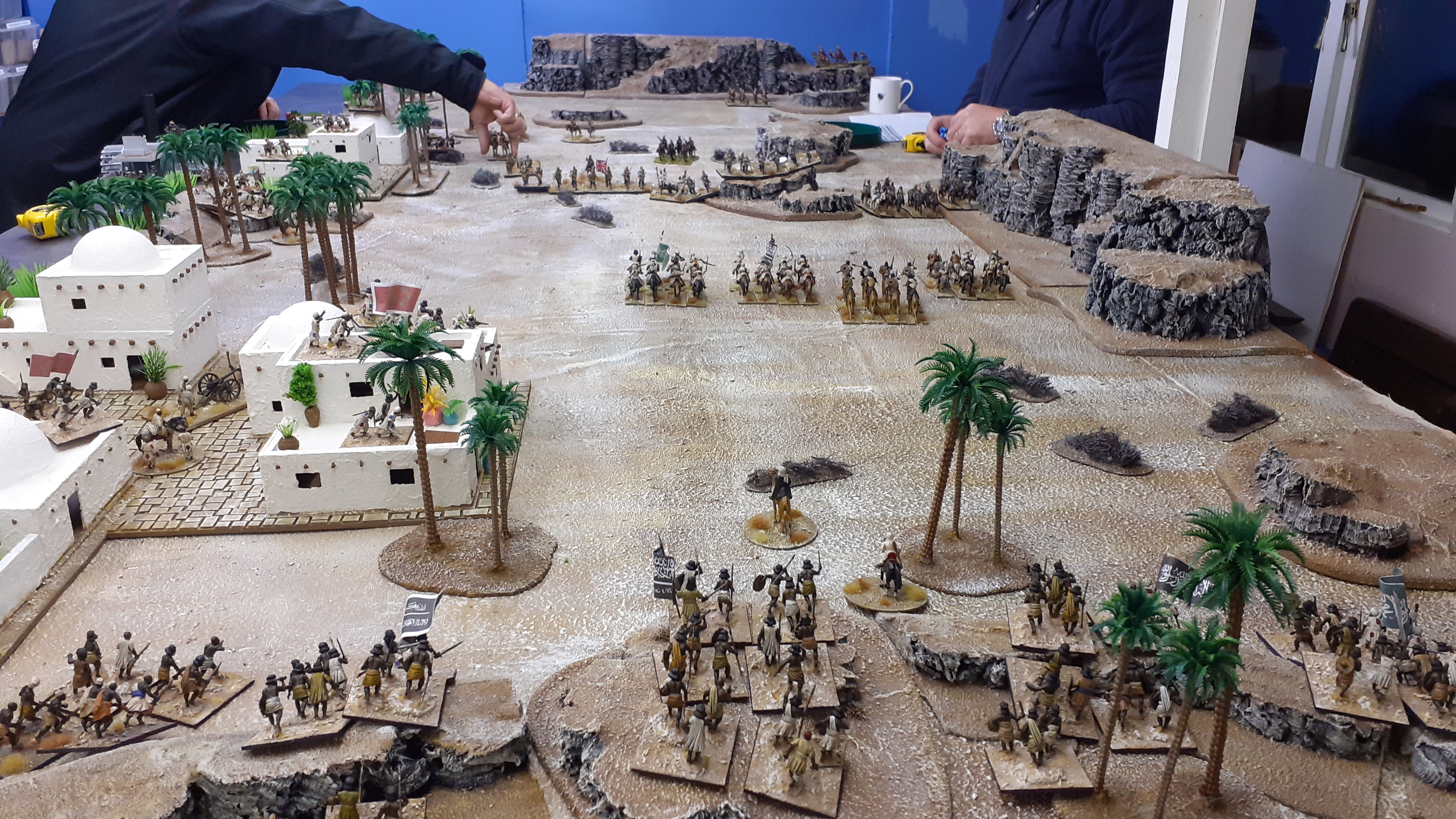 A thin line stretched across the desert awaited the Dervish horse.
Evidently the British were ready and not before long the lines started their work quickly driving off and destroying the Beja camels and shaking a further unit. With a cry for Allah I threw my last standing Cavalry unit against the British Hussars. They counter charged. Mounted on their thorough breds and armed with sharp sabres the Brits should win....BUT...a monumental disaster as the Hussars collapse in the melee and are routed from the field.
The Dervish horse swarm forward as a result of this unexpected victory wiping out the sole camel corp unit blocking their path. The British Cavalry brigade is no longer a functioning unit and retires from the field. 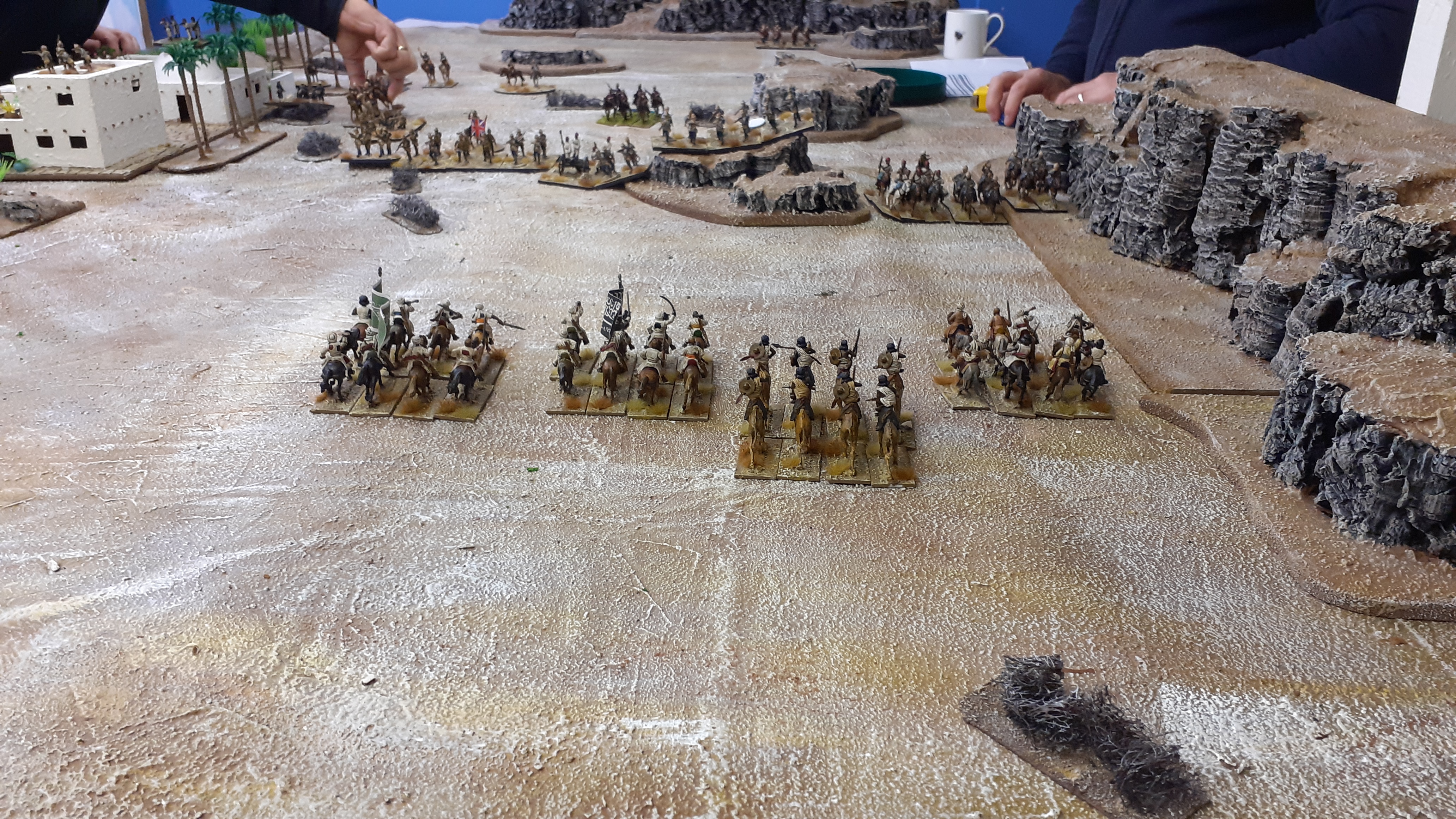 By now the Dervish warbands are surging forward and like their mounted friends they get three orders carrying them half way up the table. 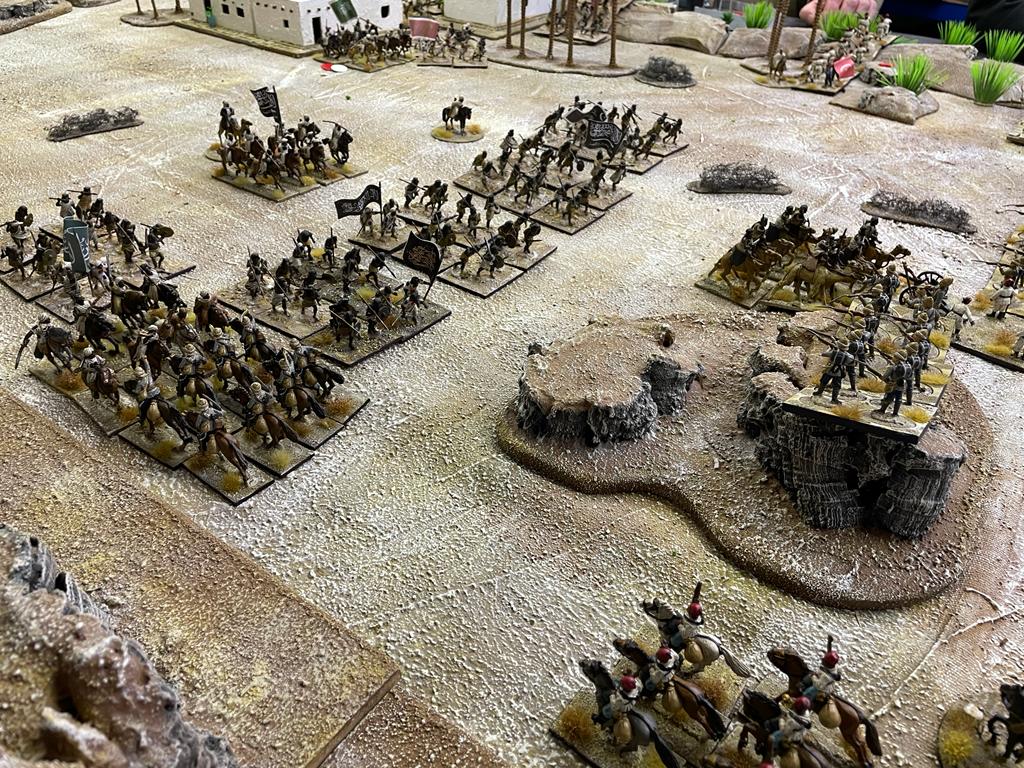 The Dervish are now one move from the rather fragile British line. The Brits open fire across the oline. Every shot misses or is saved by the natives...oops

The charge is on and the Dervish surge forward 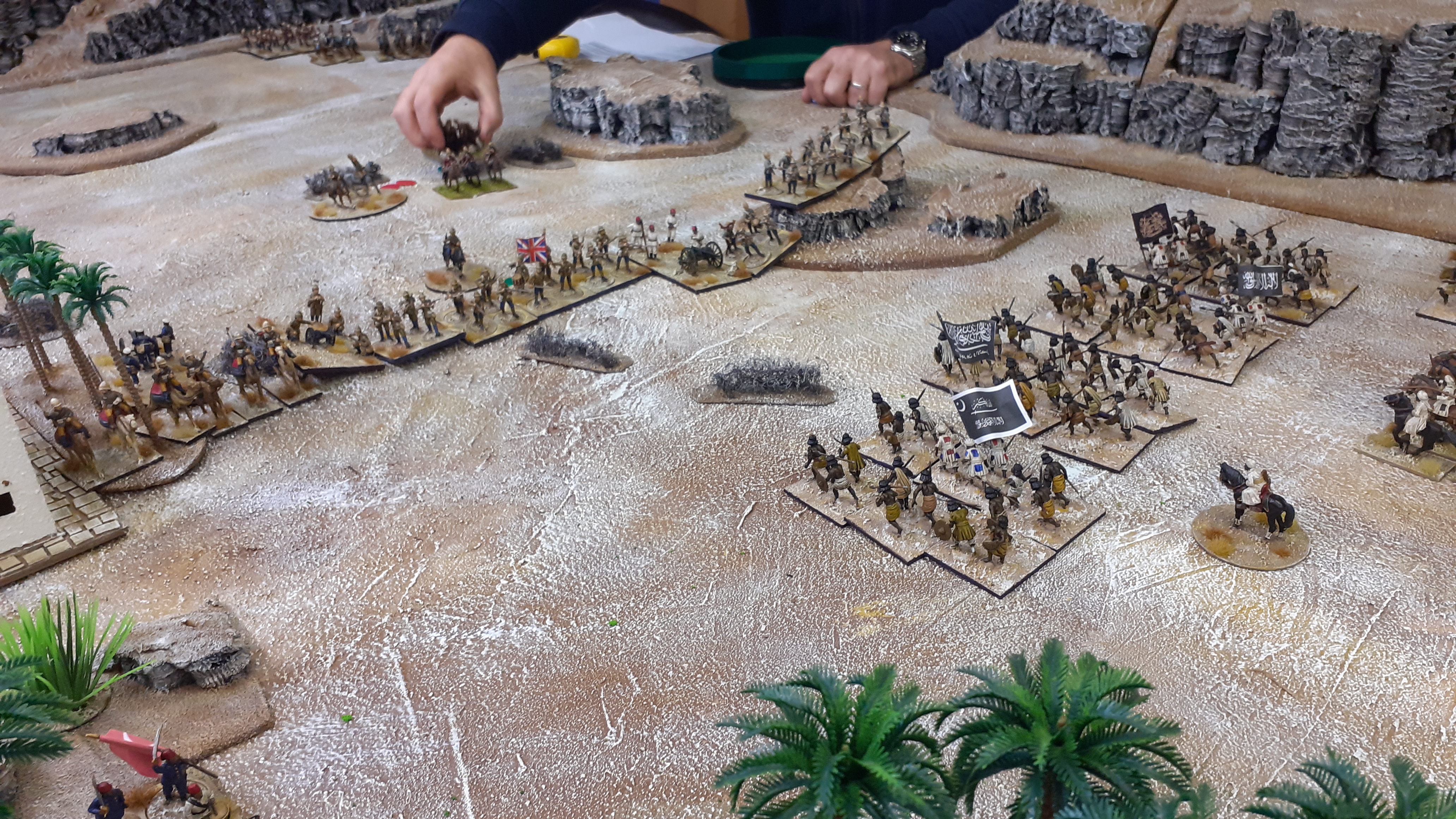 Closing fire doesn't stop the charges from going in.... 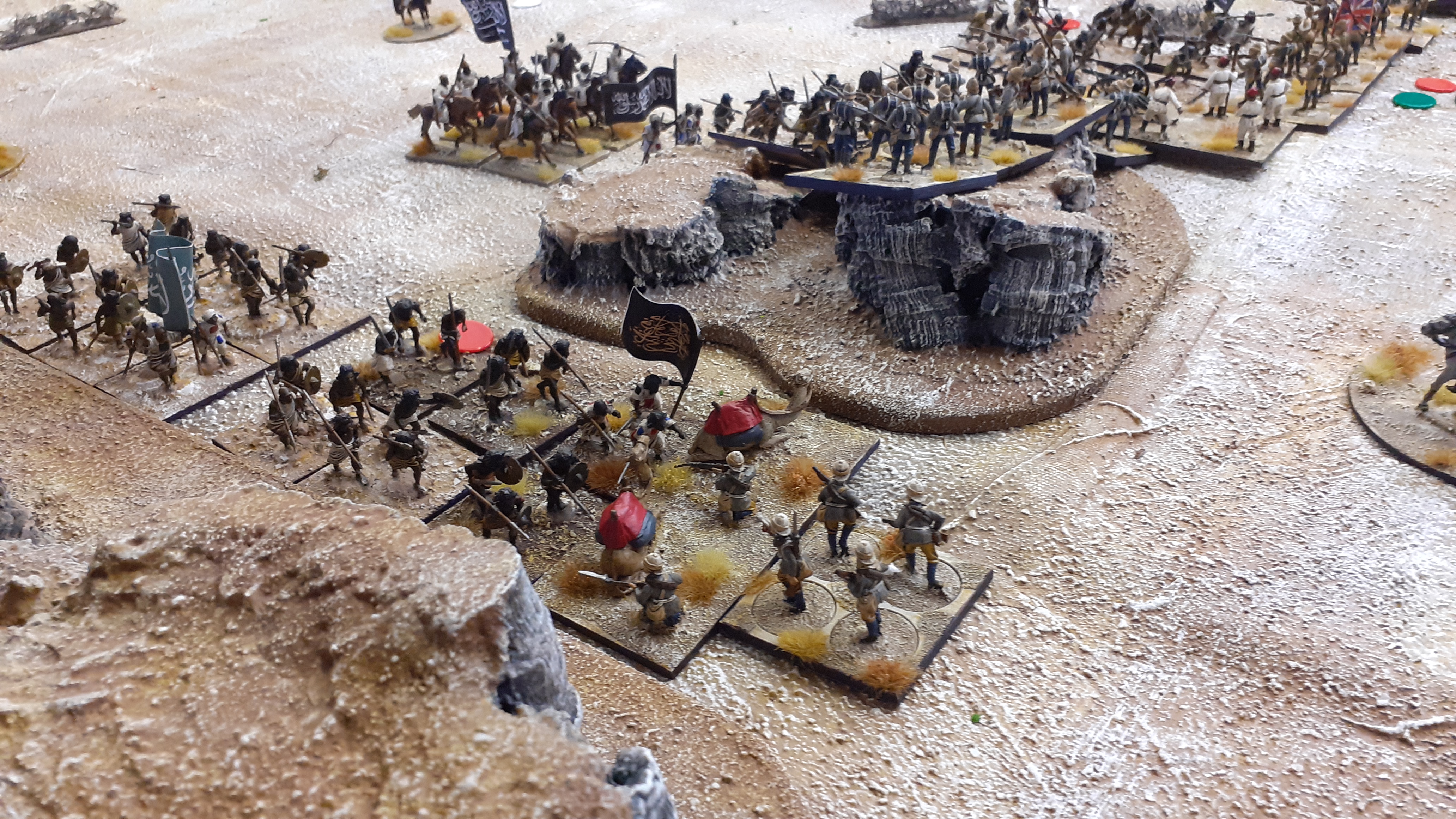 A second British Battalion is wiped out along with its Artillery support - this breaks the second Infantry Brigade. The Dervish surge forward with a still intact and viable force.
Vince's command has been shattered. He has learned a valuable lesson that you should never underestimate the locals. 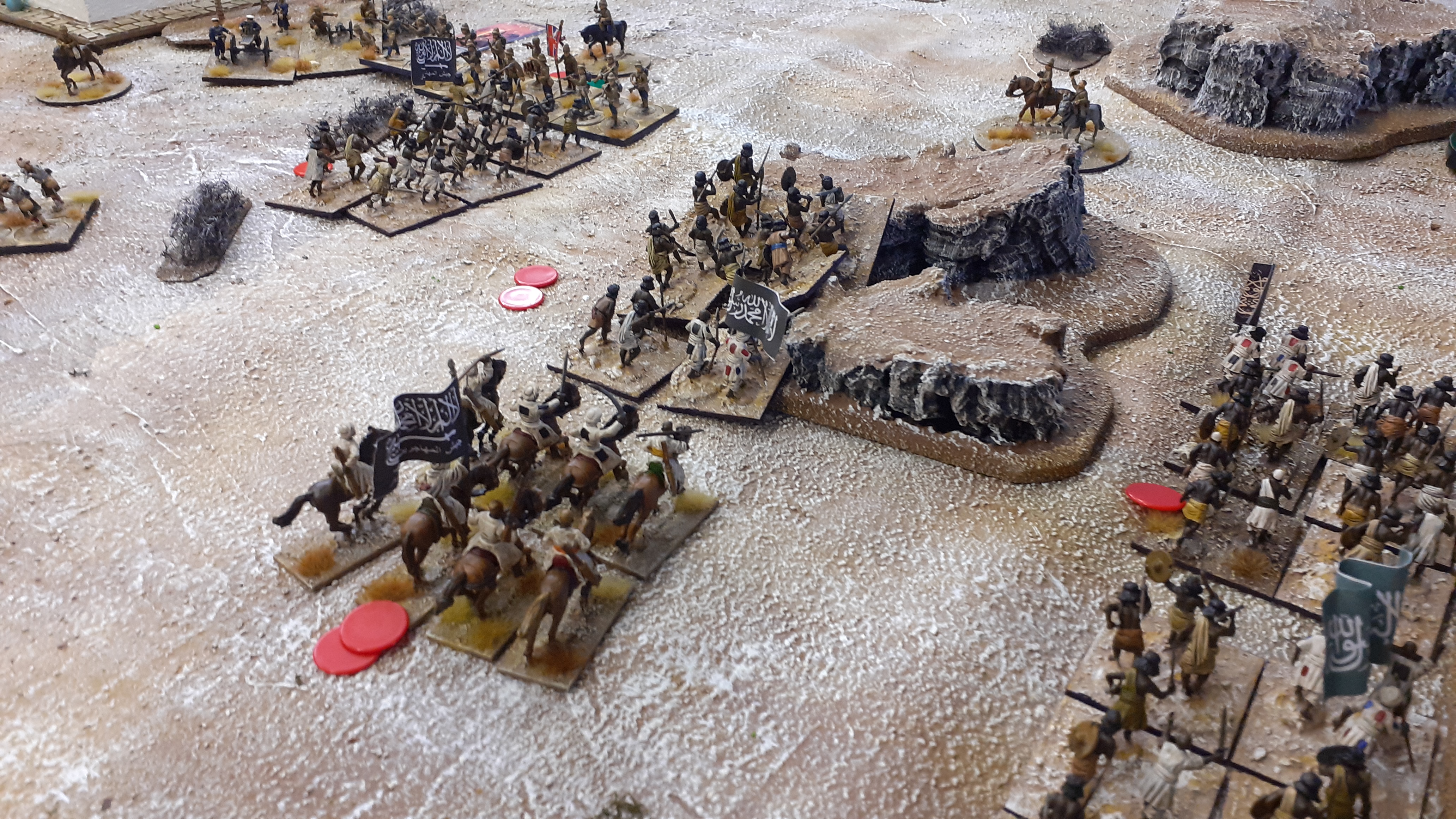 Realising that the second Brigade was now all on its own Mark graciously withdrew his forces giving the Local Dervish commander the field.
A totally unexpected victory for the locals.
This game took approximately 90 minutes to play - it was fast , brutal and a great deal of fun. We did discuss the outcome and the dice gods were most definitely with the Dervish both in their fortunate commands but also the failure of the Brits to score when needed. However saying that the ferocious charge of the Dervish where they get to reroll misses in the first charge is very potent combined with a morale save opf 4+. Forward going I think we will need to adjust this
More soon
Posted by Eric the Shed at 05:34 6 comments:

I sincerely hope you all had a great Christmas and a happy New Year ! Here is to 2022, hopefully a year that will be better than the last 2.

Still no news on the BIG thing I wanted to share last month, if anything this has become less likely to happen in the short term but you never know what might happen round the corner. In the meantime lets catch up on what has been happening in the shed.

On the games front things have been severely limited, I tend to close the shed up in the winter months because it is too cold and we reconvene to my kitchen for board games. However the spread of covid means that this luxury has been off the table for the moment, but things are looking up with the very mild weather experienced here in London I am opening up the shed this Monday for a game (s).

The focus of Monday's game will be the Battle Of Giniss fought during the Sudan Campaign and although a small affair it is best remembered as the last battle that the plucky British tommy wore his scarlet tunic in action. Why the Sudan? Well I have just finished painting a further 120 Dervish and have rebased my entire army...

The entire Mahdist force now comprises of around 450 foot, 100 odd cavalry, commanders and a couple of guns 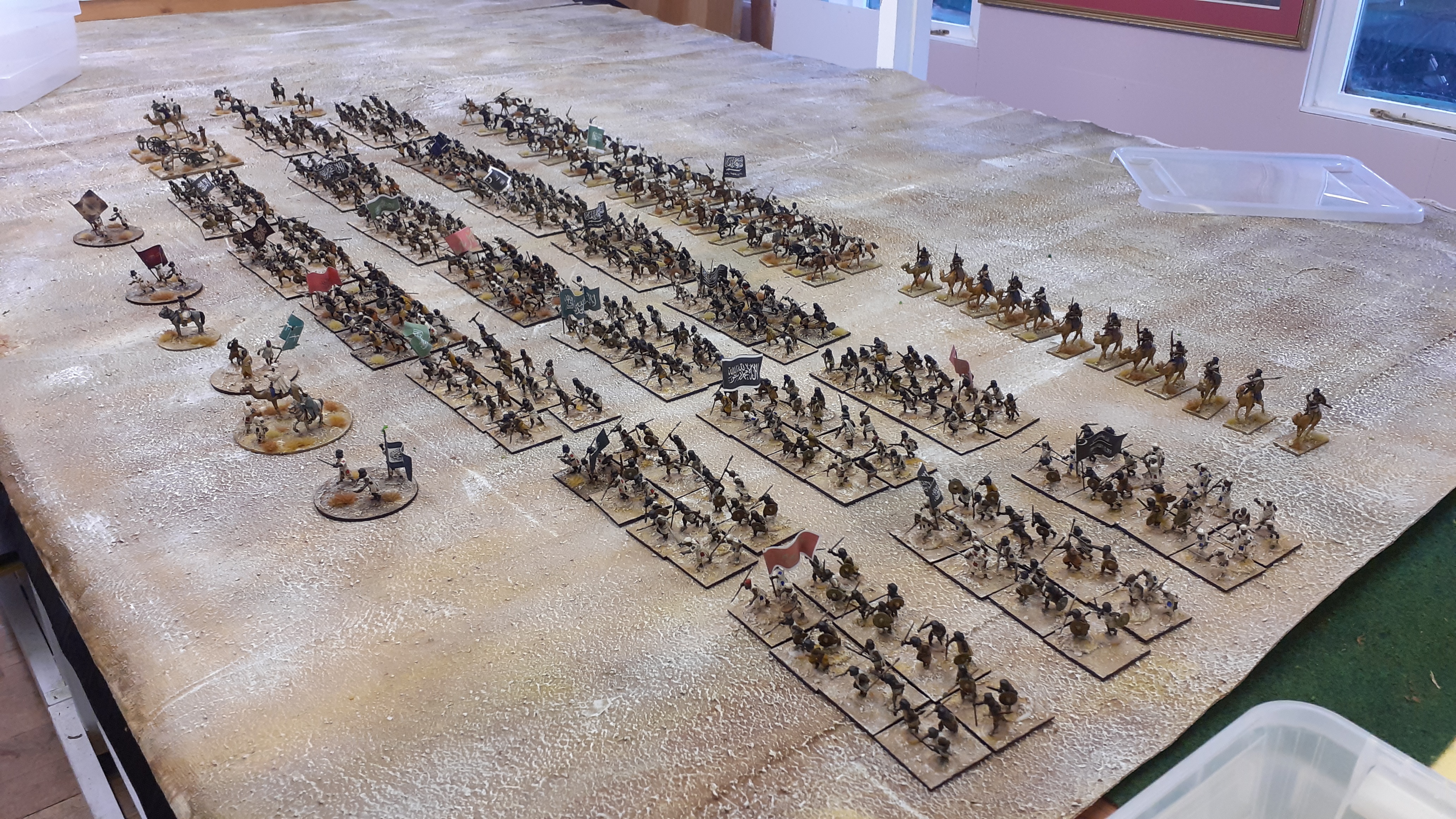 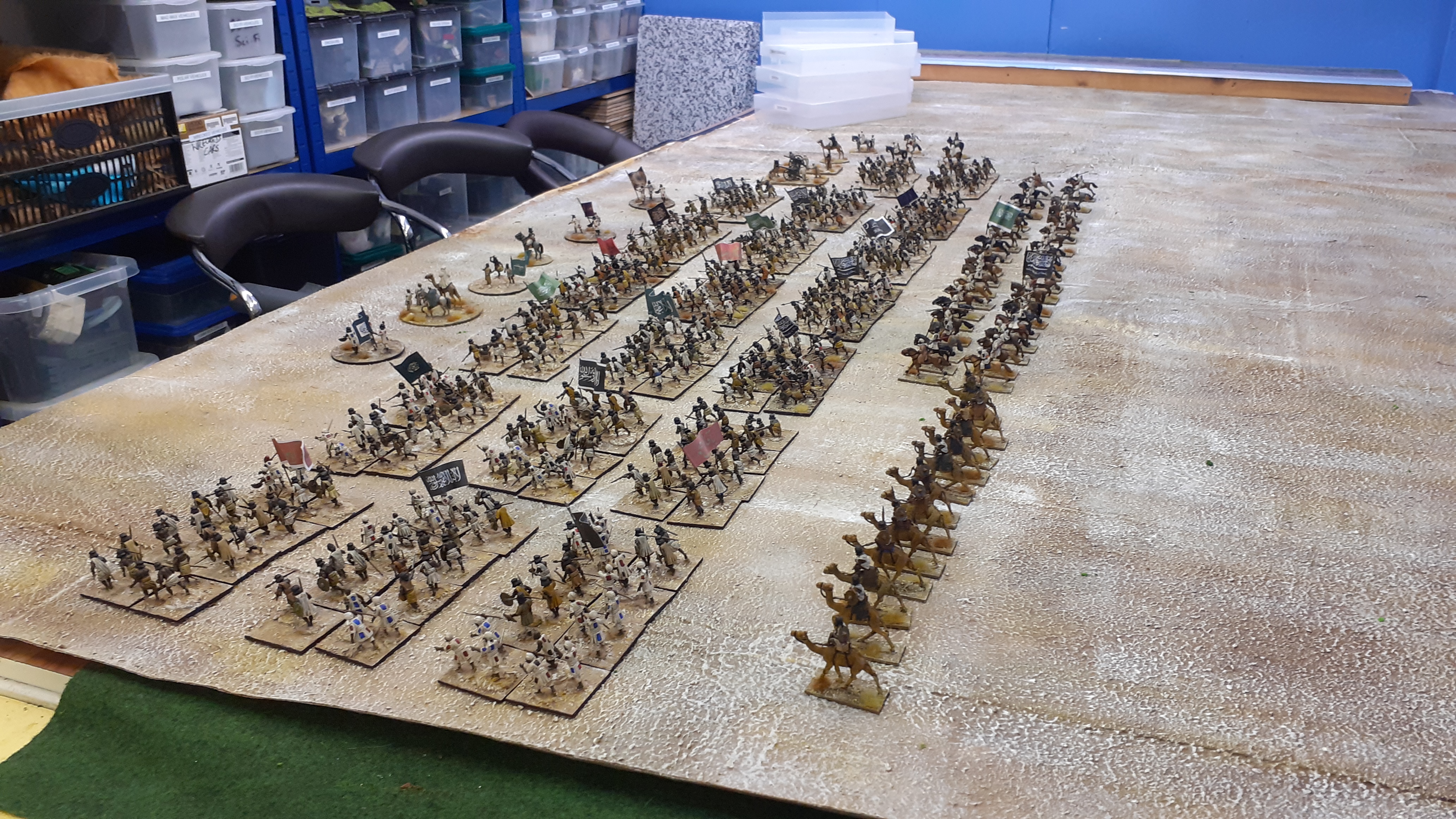 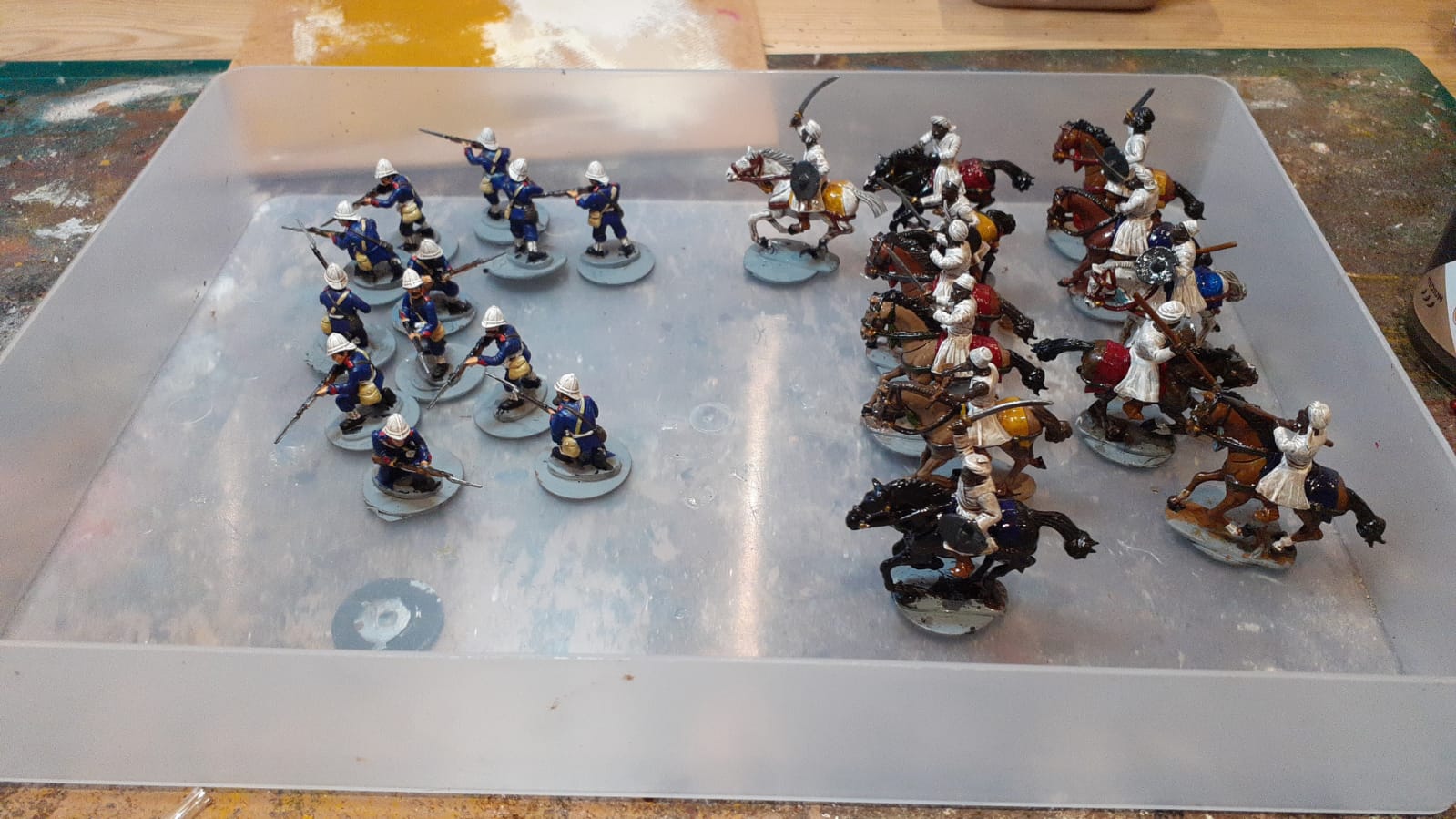 A couple of months aga I mentioned I had bought some 3D printed tanks from the Tank Factory. I was so happy with these I bought some more for my VBCW forces. These include a couple more Vickers light tanks, a Char 1 Bis, A Lanchester Armoured Car and something else ;-) 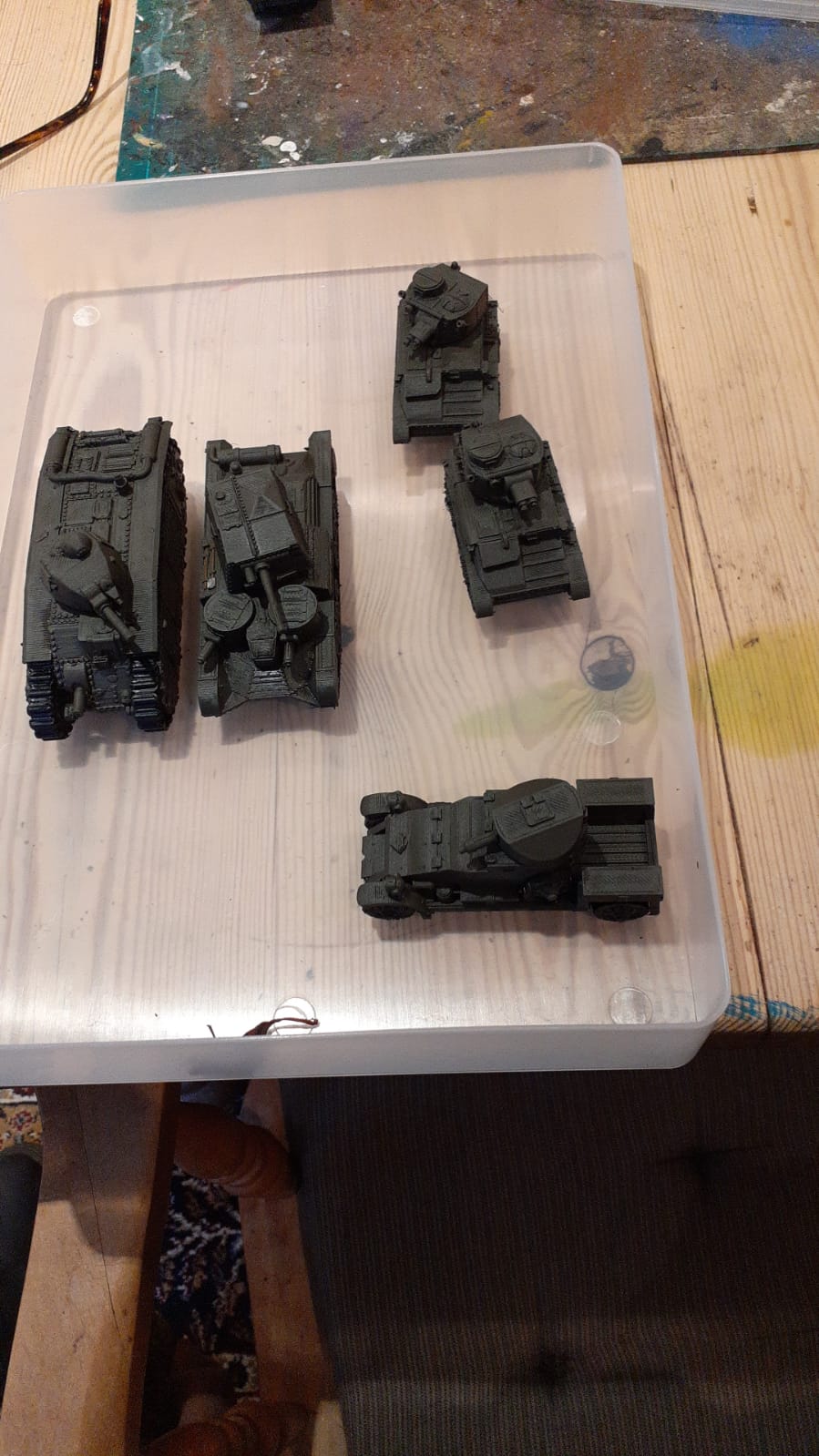 If you are looking for great value 28mm vehicles and tanks I really can recommend them. They do however take a few weeks to arrive.

Back in November I attended Warfare at Ascot Race course and purchased a couple of boxes of medieval cavalry buy conquest games at the Bring n Buy for £15 quid total. These have now been painted and are awaiting instructions (ie they will most likely be pressed into action for my early medieval war projects/crusades. They are very nice figures if a little smaller comparted to fireforge. 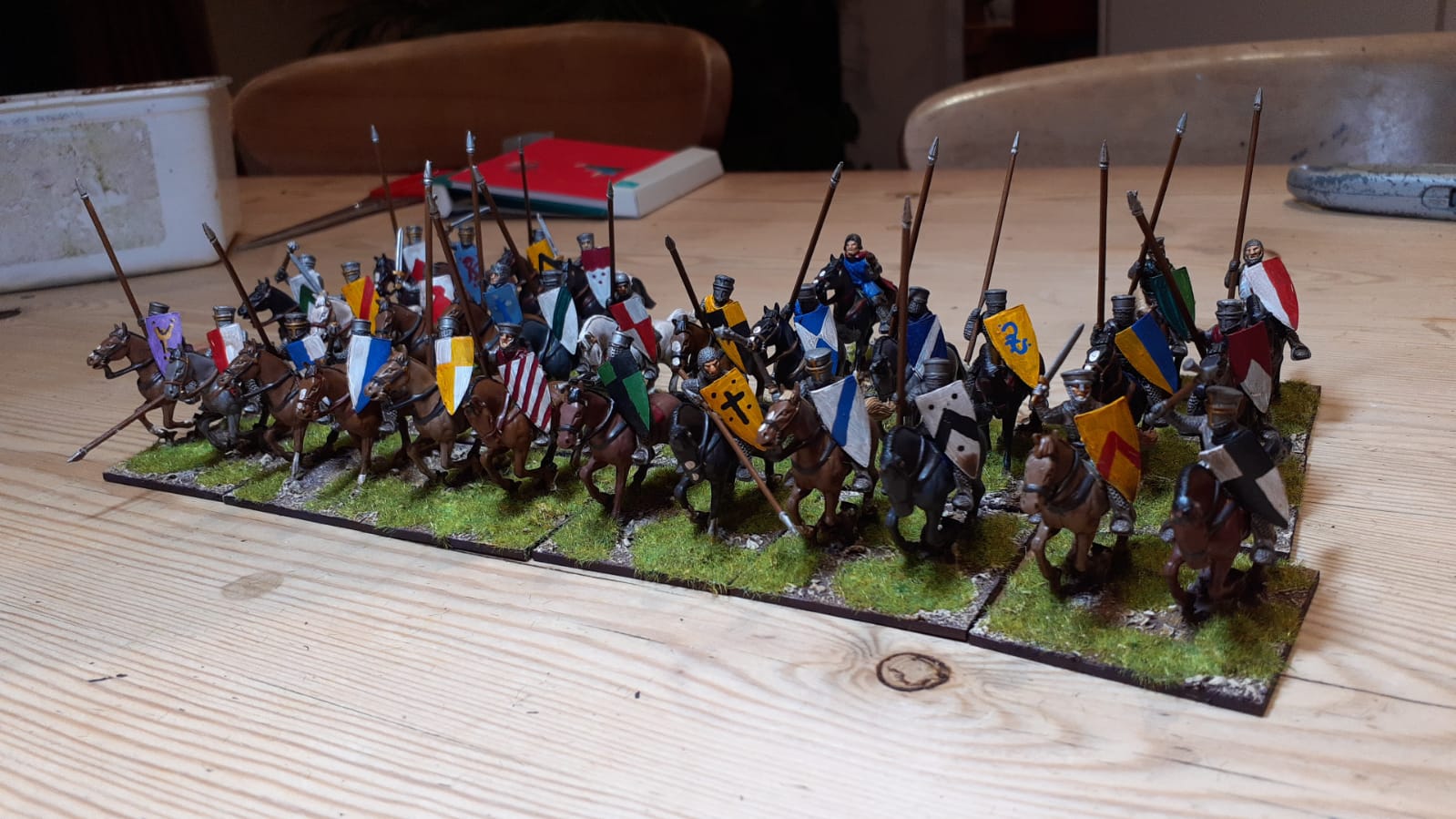 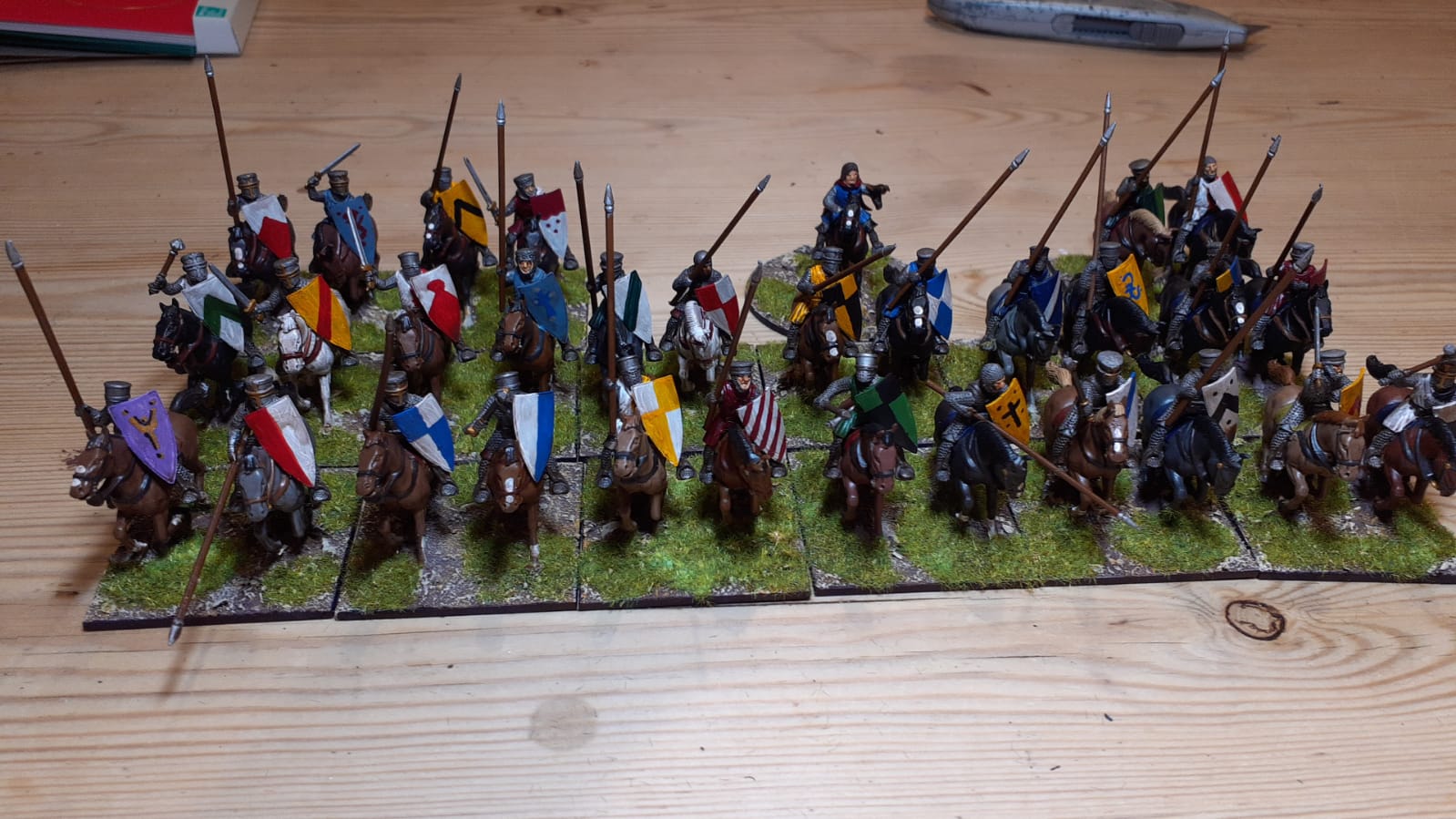 AS for Christmas Mrs Shed bought me another 320 plastic Perry Napoleonics !! A french and british infantry Brigade so that a few more figures to paint in the New Year. 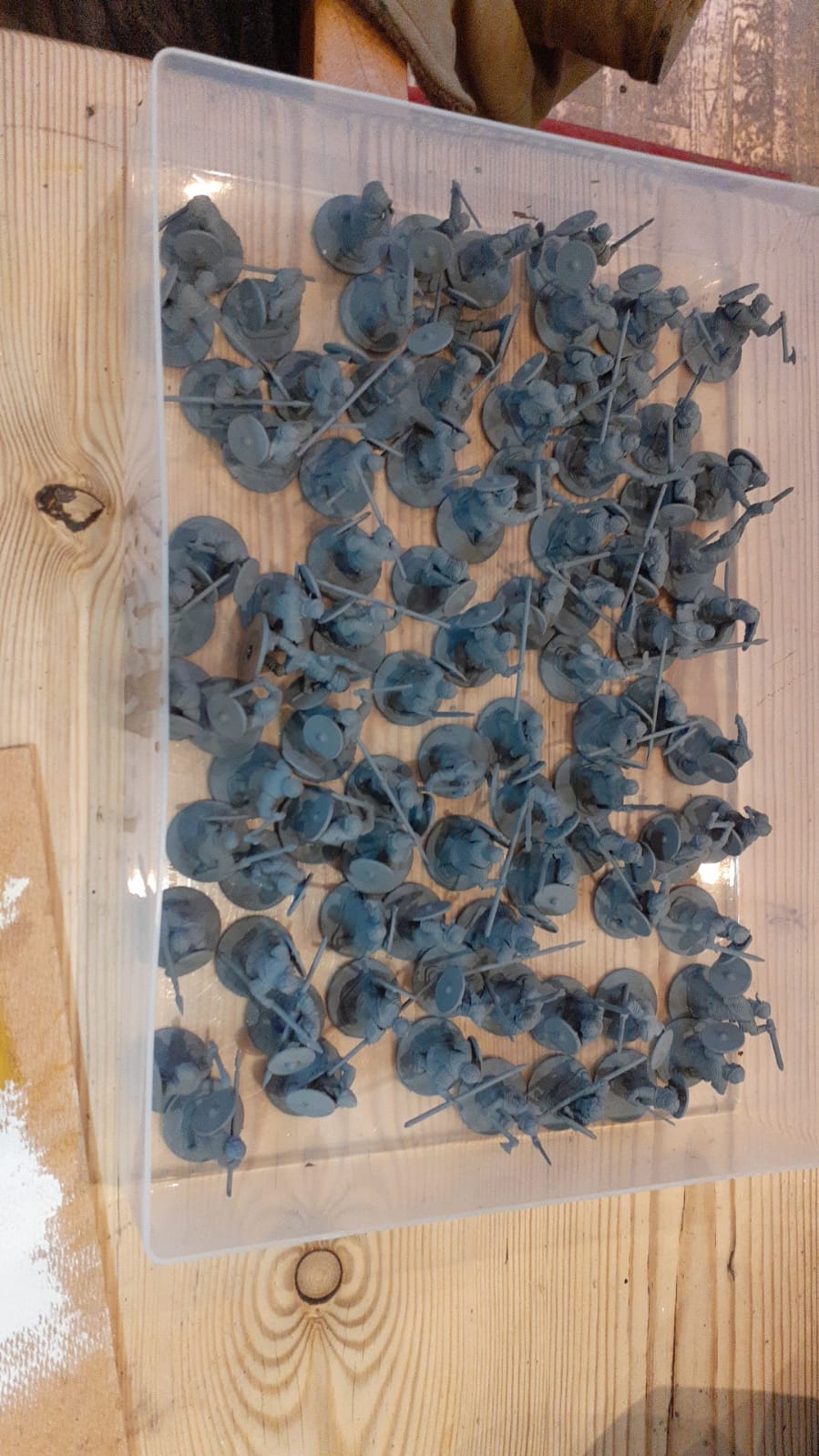 In the meantime I wish you all a great 2022 and here is to more games than last year !!