Look what Postie brought me today

So I am quietly minding my own business working in the study at home and there is a knock on the door....a man with a van and a very big parcel.

In the end I plumped for the core pledge and the Apocalypse set...

Here's a picture of the pile of goodies....

Thought I'd break open the Apocalypse box - the minis are gorgeous

Here's a couple next to a 28mm mini

For those of you interested this was what you got with the core pledge in the end...

Jason and the Argonauts part 4

Good Evening (or morning, or afternoon)

Its been a week since my last post and unfortunately I think my posts might become less frequent in the next few weeks. Too much to do on the Work front...;-(

However by means of relaxation I am continuing to plough on with my Jason and the Argonauts project. In this post you get a double whammy, both a finished piece of terrain and some figures painted.

When I left you last I was in the process of mounting the aquarium temple on an mdf board and starting the groundwork. This is all now complete. I did debate about repainting the temple itself but it would have been such a fiddly job I left it as is.

Onto the figures - well in the film the temple is inhabited by Harpies - and so these were the first receive a coat of paint. They are from Reaper - the first time I have painted these bendy plastic figures. They were easy to paint and the details are good.

Whilst painting the Harpies I also decided to paint the two Mortar Gargoyles I purchased (although not strictly from the Heroic Greek Myths) I loved these figures and reckoned they would add some extra colour. Indeed they could always double up as 'alternative' harpies.

Finally I turned my attention to some of the Greek Warriors. I decided on two colour schemes for these - Red and Whites. In time all the figures will be painted in different colours to aid the players controlling the units. The rules I am working on allow each player to control one Hero and up to 6 henchmen.

The Greeks are a mix of Foundry Argonauts and Black Tree Greeks - they are virtually the same scale and quality of design.

part 5 can be found here
http://shedwars.blogspot.co.uk/2016/12/jason-and-argonauts-part-5.html

So as I suggested in my first post on this subject I have been ordering a few bits for this project and if by magic postie arrived with a few gifts...

Part 2 can be found here
http://shedwars.blogspot.co.uk/2016/11/jason-and-argonauts-part-2.html

First up from Grand Manner the Argo...

This is a resin cast Bireme perfect for the genre. It comes with resin mast, sails (furled) and steering oar. In addition the Stern post is a nicely carved curvy bit. Shame really as I wanted a goddess figure head. Maybe I can customise something here.

The package was so secure it took several cuts to open. Not surprised really because the ramming horn on the bow looks really fragile. I think I am going to have to mount the whole boat on its own base lest this gets broken. Painting this little model will get its own post in the future. 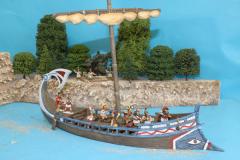 In addition I received another parcel of Reaper Minatures - these include all sorts of enemies for my Greek Heroes - Medusae, Harpies, Giant Scorpions etc. As these get painted I'll post up progress.

Part 4 can be found here
http://shedwars.blogspot.co.uk/2016/11/jason-and-argonauts-part-4.html

Jason and the Argonauts part 2

A fairly busy day kicking off this project...

What a new project you say well if you want to read the intro head here
http://shedwars.blogspot.co.uk/2016/11/the-next-big-project-isjason-argonauts.html

OK - so what happened today. Well first up I based and primed all the Greek Warrior figures - these are a mix of Black Tree Greeks and Foundry's Argonaut range.I reckon I have around 36 of these to paint. The monsters are other figures should arrive later this week.


Secondly I primed and then put on the first coat of my Talos figure - really happy with the base bronze achieved. If interested its just a GW bronze paint mixed with black and brown paint. I'll begin the highlighting later on this week. Of course Talos is going to need a plinth so that will need to be custom built

Finally I turned my attention to the first terrain piece of the project the temple ruins. Firstly I cut down the resin base so it could sit almost flush on a 50 x 50cm mdf board. This was then levelled off with some bluestyrene blocks


Once all dry the area around the temple was smoothed off using filler. This dried quite quickly and then got coated with PVA.

Once the pva was dry I added the first coat of sand. I left an area near one end of the temple clear onto which I cut and place some blue foam flagstones. These look very similar to the stone flooring inside the temple. Ill leave all this to dry over the next 48 hours before moving onto the next stage

Until next time
part 3 can be found here
http://shedwars.blogspot.co.uk/2016/11/jason-argonauts-part-3.html

The Next Big Project is...Jason & the Argonauts

Now that I have completed my Zulu Wars project its time to talk about my next project that I'll be working on over the the winter months.

This was a relatively easy task given I have never done anything in this genre before - it opens up new opportunities for terrain builds, different figures, monsters and fits with the current passion for skirmish games....oh and did I say it contains monsters?

Ever since I was a little boy I have always loved the movie Jason and the Argonauts...for me it epitomises this fantasy period and I think its probably a favourite of most gamers. I say most becaiuse my friend John came round earlier today and cl;aimed he'd never seen the movie.

The Movie itself came out in 1963 (two years before I was born) and as a cinematic story I don't think they get any better. A group of heroes sail across the Aegean sea facing various trials whilst trying to obtain a fabled artefact. It has all the right ingredients for a wonderful table top game.

In fact the whole Greek Fantasy period seems to be having a bit of a renaissance at the moment - check out the Mythic Battles Pantheon Kickstarter an no doubt there will be a Frostgrave does Greece and Olympus Rampant.

So without further ado let me tell you whats going to happen...

Of course the stars of the film are the various mythological creatures that are bought to life by Ray Harryhausen, the pioneer of stop go motion filming.At its time it was cutting edge and even today we can only marvel at the patience and imagination that was used to bring these models to life on the silver screen.

So over the last few weeks I have started accumulating the various pieces I need to bring this adventure to life on the games table...

I am going to need the Argo - The Bireme that carried them all across the sea...

Of course I am going to need the Harpies and the temple where they are defeated....

Actually  I already have the temple...this is a very large fish tank piece I bought in the states last year

The Harpies have been ordered from the same vendor as the Hydra. I also decided to buy some other beasties that do not feature in this fil but are of the same mythos eg minotaur, medusa etc

Of course I'll need the crew and other personalities. Having bought some Black Tree Greeks I discovered that Foundry produce a range of Argonauts so these duly went into the basket. These arrived today so a post will be forthcoming

My checklist also has a note saying terrain - the base of which will be my desert boards but I'll need to add some custom pieces (eg a beach and cove). I have actually started the first piece which will feature in another post.

Finally there are the rules...I already have some ideas fore these and as they get fleshed out I'll post up some thoughts...


Of course when I decided to build my Zulu War project I would at sometime have to feature Rorkes Drift and so I busily started looking at the various options.

I quickly realised that there were three ....

Fortunately my decision was made easier when I picked up the latter models for a good price along with all the barricades from the Warlord Games Rorkes Drift box set from a fellow gamer, Hu Rhu, at BLAM.

These were part of a long dormant project of his and part of the deal was to invite him down to the shed once they were all built. No problem !

The buildings themselves are all MDF and it became quickly obvious that it would be much better to paint the pieces before assembly. All the walls were sprayed matt white before I turned my attention to the wooden door frames, windows and lintels.

The exposed brick work was painted basalt gray and then each brick picked out in a deep red brown.

The set I bought came with some mealie bag defences and the resin wagon. These I augmented with a few extra purchases from Warlord Games themselves - chiefly some more barricades and the redoubt. I have to say these resin pieces are gorgeous and the cart covered in bags is so evocative of the movie....

On top of the buildings I acquired some bell tents from Renedra and based these on plasticard. Rorkes Drift is almost complete. Although the layout shown is not accurate it does convey the affect I was looking to achieve. Just had to add some defenders...;-)

Thanks to everybody for following the progress on this project - it has been a labour love and as mentioned in previous posts it is dedicated to the memory of my father.

Of course we now have to refight this engagement and what better than to do this on its 138th anniversary  - Sunday 23rd January - I'll keep you all posted.
Posted by Eric the Shed at 18:42 12 comments: