The Great Game ( a re-fight of Waterloo)

Two weeks ago I had the fortune to be up in Glasgow as an umpire for the Great Game replayed. If you haven’t heard about this it was a massive re-fight of the Battle of Waterloo featuring over 22500 x 28mm figures on the table.

The event was hosted by the UK registered charity Waterloo Uncovered. This organisation uses battlefield archeaology to help veterans of our armed services to overcome conditions such as PTSD. I met several of these chaps at the event and they all stated how much this charity had helped to turn their lives around. It is a worthwhile cause and I would urge anybody interested in what they do to check out their website.

This post is going to be picture heavy as I have already committed to writing an article for Wargames Illustrated but I will report at the end of this post my observations of what I thought went well on the day and what didn’t go quite as planned.

Perhaps these learning's can help those thinking about planning future type events.

Before I start with my picture board I’d like to pass on a few thanks.

Firstly I’d like to thank Guy Bowers (of WSS fame) for accepting my candidacy as an umpire. It was great to catch up with you in Glasgow.

Secondly I’d like to pass on my congratulations to all those directly connected to Waterloo Uncovered. You delivered a spectacular event and you deserve all the plaudits already mentioned across the web and national media. Yours is a most worthwhile cause and deserves greater prominence.

Thirdly I’d like to thank those directly connected to the organisation of the game. In particular Bill Gilchrist, Jack Glanville, Ian Beal and Donald Adamson. Your contributions were significant.

Next I’d like to thank my fellow umpires and in particular the Australian contingent who warmly welcomed me into their select circle for the four days.

Finally I’d like to thank all the combatants in the Great Game – they made life easy for us umpires with no fuss or bother.

The hall had the fortune of having a gallery upstairs so I managed to get a number of birds eye shots of the action - cheaper and safer than using a drone. 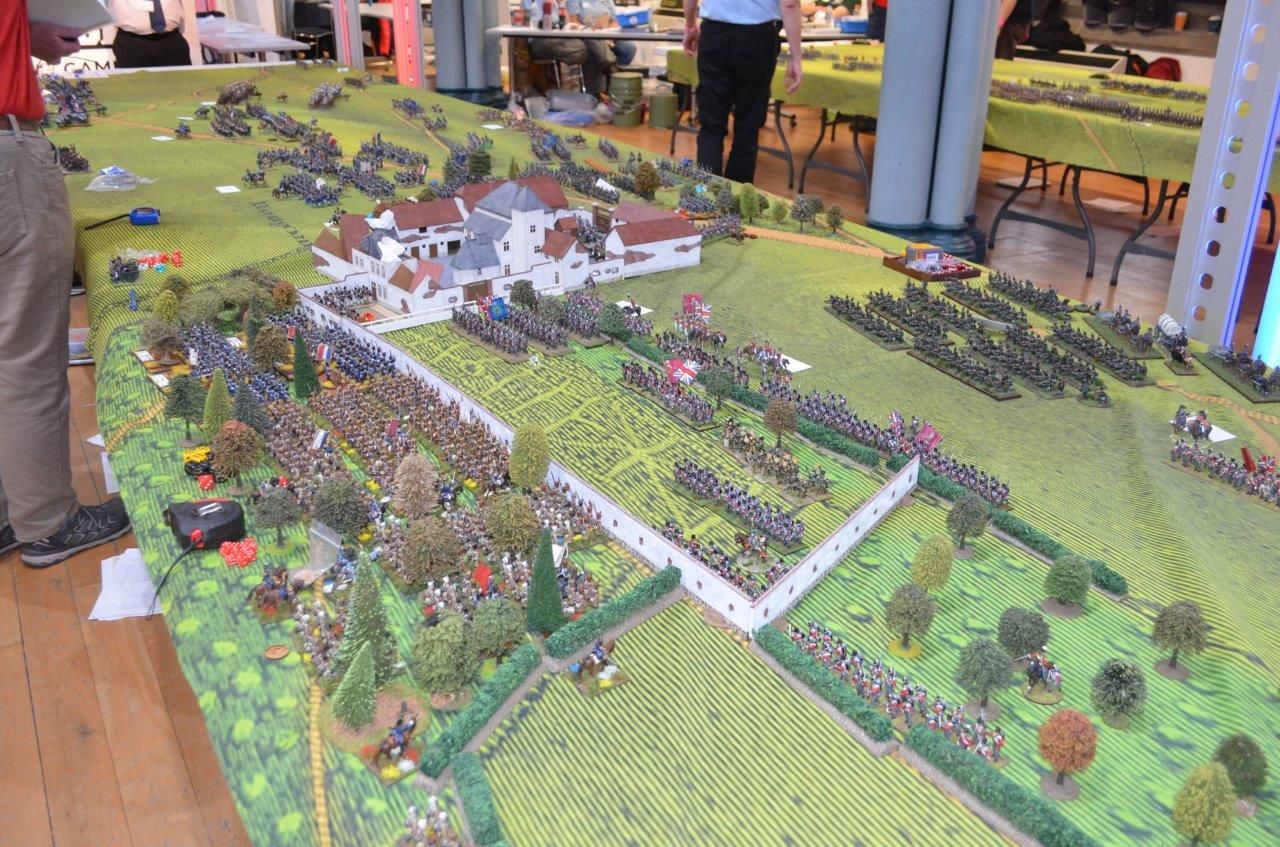 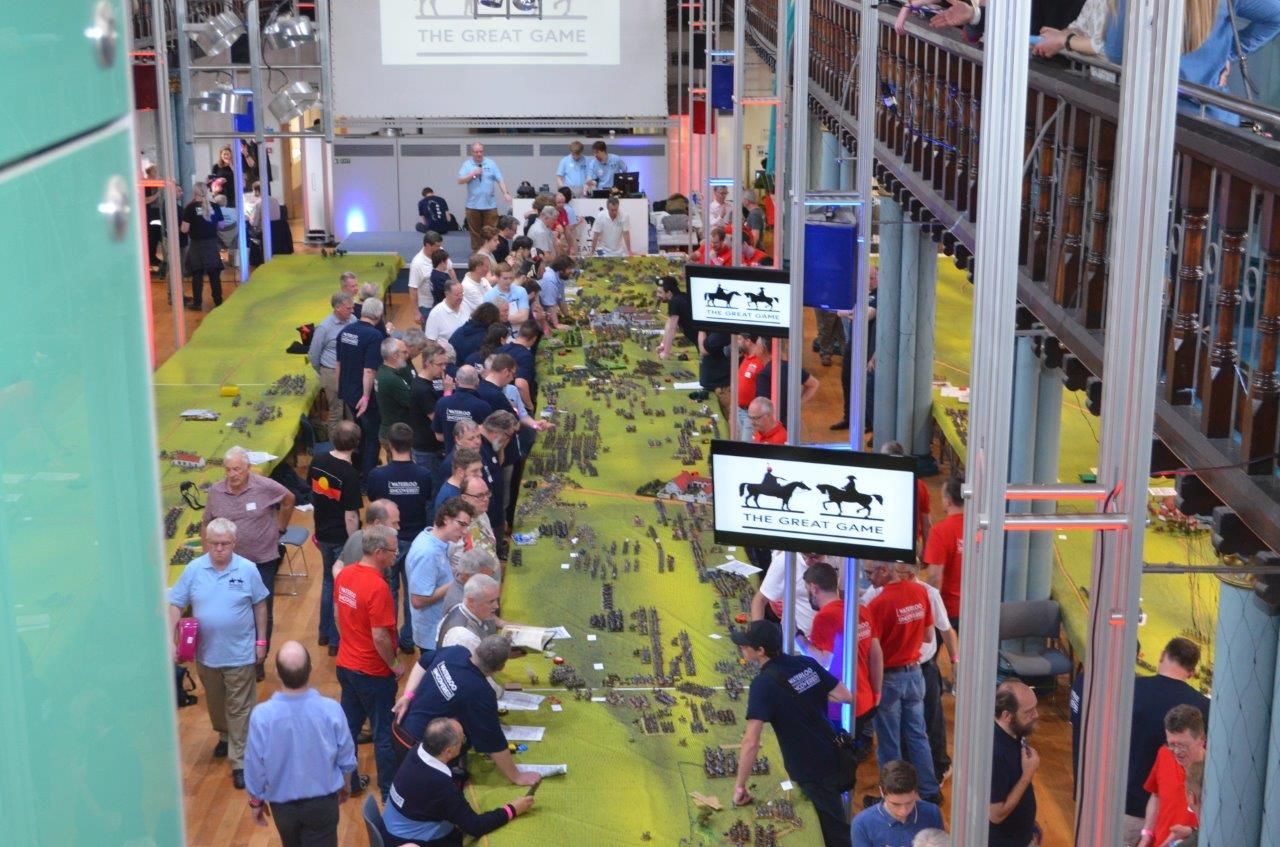 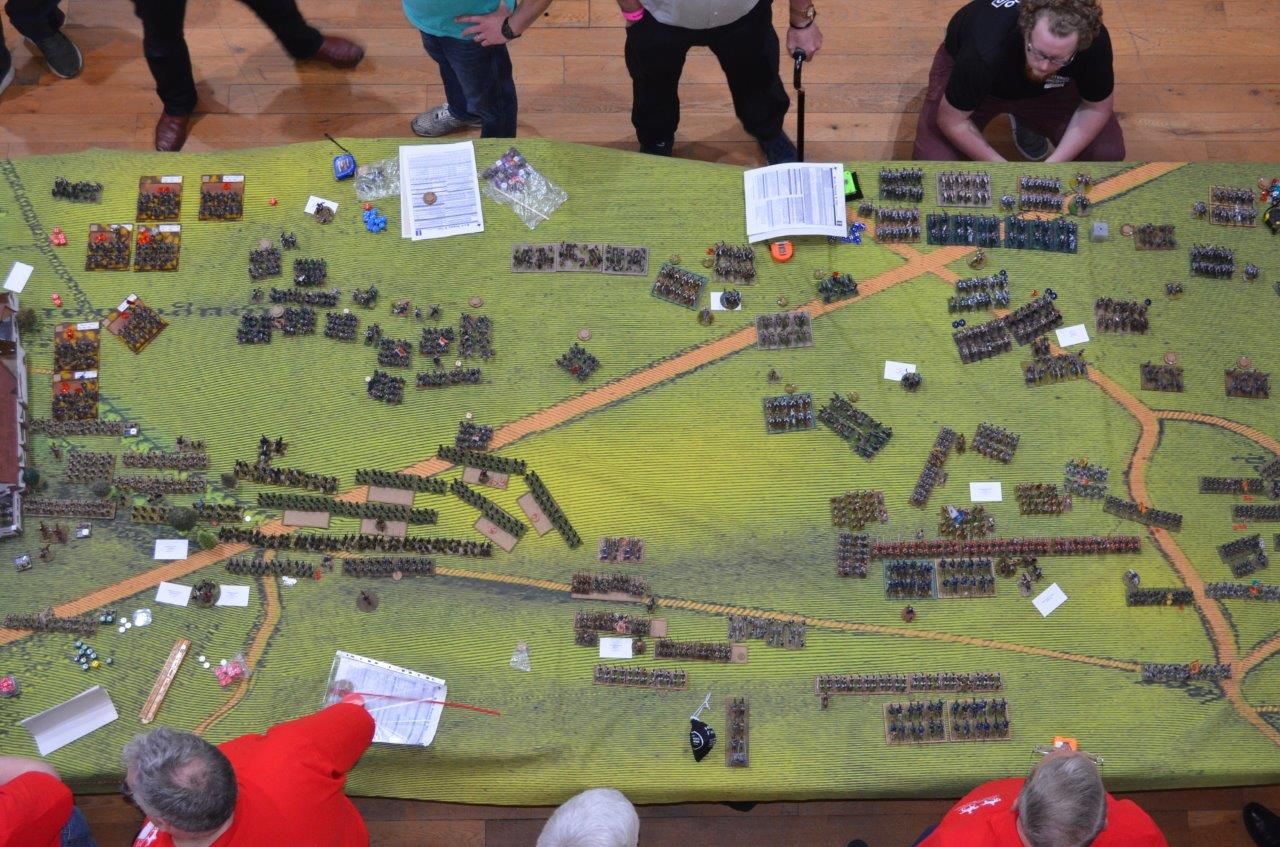 So what could be learned next time?

Black Powder (1 or 2 take your pick) is a great set of rules, simple to use and learn and delivers a result. However there were tweaks in the Great Game that caused some issues. The biggest of these was to ignore the core rule of Shaken brigades. As the rules stand once a brigade has either lost or had shaken more than 50% of its forces that unit effectively becomes useless. In the great game this was effectively ignored and only once the brigade was down to one effective unit would it retire from the field. This was done to ensure that players were kept in the game. Sadly it ended up ensuring an overpacked centre with little room for movement in an attritional battle for frontage. Recommendation keep the rule as it is written and get players to recognise that there commands could evaporate quite quickly. It’s the taking part that counts.

Secondly the distances on the table were stretched and the ruleset really struggled to cope in key areas. The actual battlefield is no more than three miles across and a man on a horse could cover this in less than 20 minutes. In an ideal world troops deployed on the far left should have been able to strategically move across the rear tables to the far right and vice versa. This was not considered and we ended up with a perverse scenario that it would have taken more than two days of gaming to order a unit successfully from east to west. It was less of an issue when attacking to the front but it did mean very little tactical movement in the game. Effectively you could only attack what was in front of you. Combine this with point 1 above and you end up with stalemate. When the French broke through into the Allied rear on Sunday morning they had no opportunity to exploit their success with reinforcements.

Unfortunately the gaming battlefield was completely flat but as any proponent of Waterloo would know it is an undulating battlefield with hills, crests, valleys and rises. These were printed on the map but extremely difficult to read and quite rightly the judging team decided to forego these features. We did however reach a compromise on where the key British ridge would feature – the edge of one table. This worked in principal but might have been better if the map was slid further to the south with the ridge occupying the central part of the second row of tables. This could have been formed from some simple sheets of polystyrene for little cost and place under the mat. Sliding the map south would have also created ore action on table three (hougoumont would have been on this table).

Finally the biggest weapon in Napoleons armoury was hamstrung by the rules. At no pint could he have built an effective grand battery. The 60” range given in Black Powder does not reflect the real ranges of the artillery especially when compared to the 18unch ranch range of muskets. For such a table I would have argued an increase in artillery ranges.

Did these issues impact the game – in part yes – despite arriving early the Prussians could never bring their full weight to bear on the French and with no rapid deployment of reserves commanders could only really react to what was happening in front of them.

That said, it was a fine game to watch and I know all participants had a great time.

Once again a big thank you to the organisers...