The obsession with the jungle started about four years ago. When on holiday in Mauritius I discovered some seed pods under a particular tree in the garden. Thinking these would be ideal as trunks for tree ferns I collected a bag full and smuggled them out of the country. A quick dab of glue and a suitable 'fern' soon cpmpleted the tree.

Si I needed more than just tre ferns in my jungle. Fotrtunatyely a slot in time presented itself - 4 weeks of 'gartdening leave'  gave mne the opportunity to start the jungle proper. The following slides illustrate the basic principle behind my jungle construction. The starting point were these aquatic 'grass balls'. 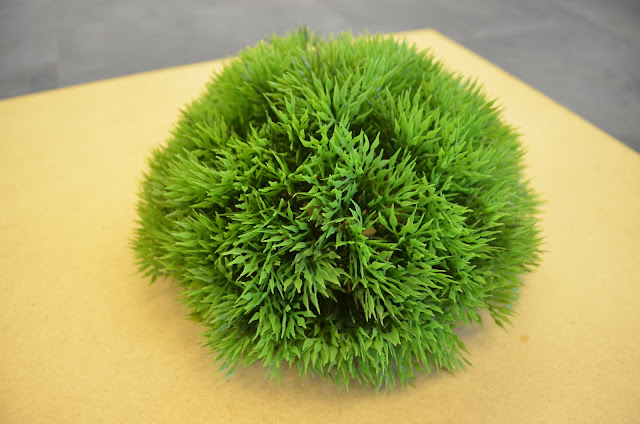 Each ball is actually made up wiith several sprues of leaves - the reverse side illustrates this better, 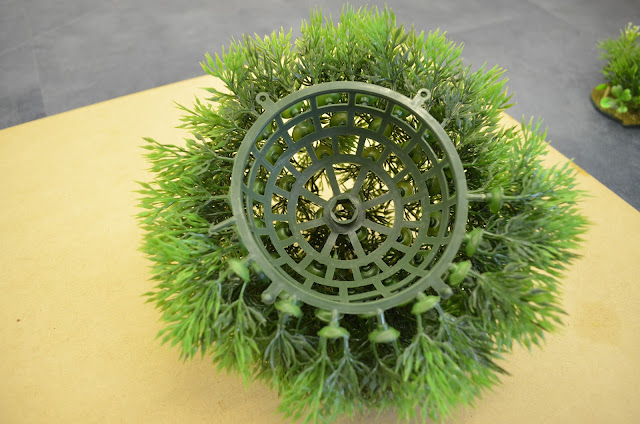 By gently pulling the leaf sections off the ball I was left with .... 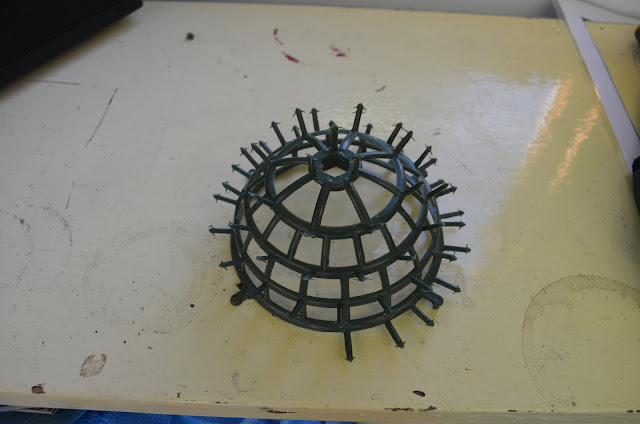 This dome ended up on a mates rebuild of the Reichstag Stag for a WW2 game - recycling is good !

Over the next few months I bought several aquarium plants...every single one of these has a common denominator they all have holes at the base to hold them onto the sprues....could I use these? 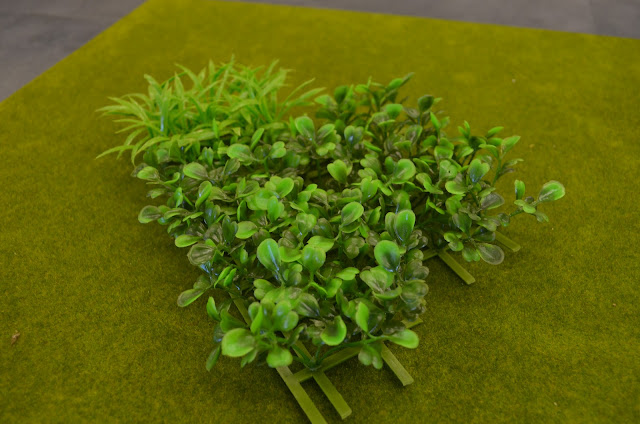 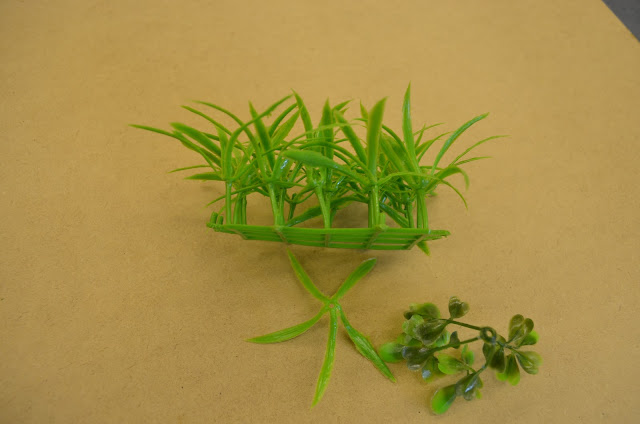 Thinking quickly I realised a simple base mounted with match sticks would be all that is required. Five minutes later one base, painted and flocked (at same time) had six holes and matchsticks glued in. 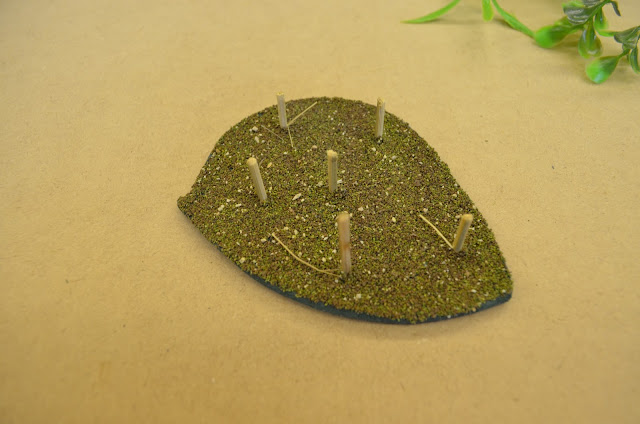 Gently the leaf sections were pushed onto the sticks. No glue was required. 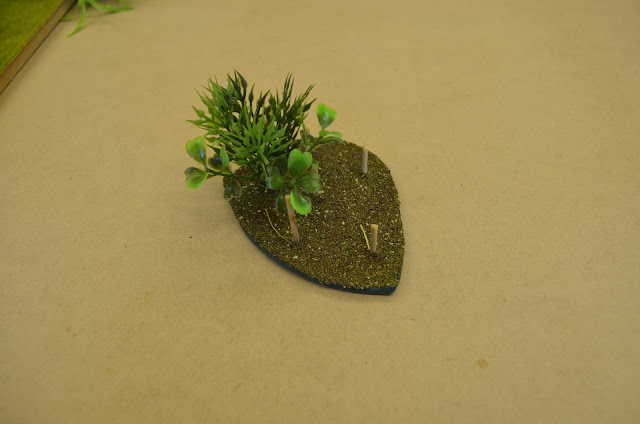 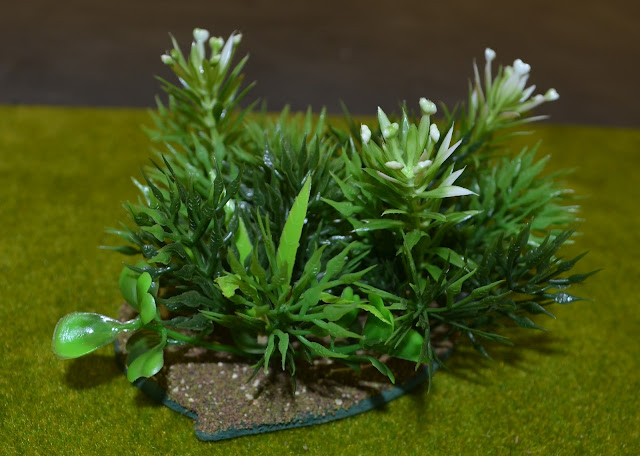 Within a few days a sizeable number of plants were created. The next few slides are a montage of the various games that can, will and havebeen played in this interesting terrain.

First up the big board - 3m x 1.5m of jungle adventure

A couple of ground shots 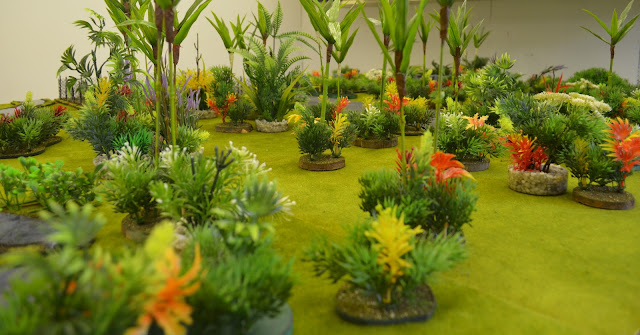 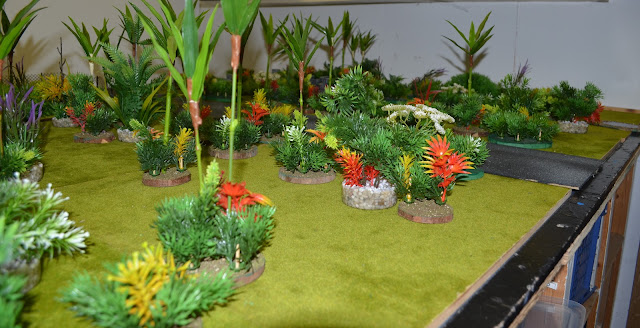 On river banks of the Umbogu we find the village of the local natives...

The local chief summons his warband....

Meanwhile deeper in the Indian Jungle we come across the lost temple... (aquarioum scenics repainted) 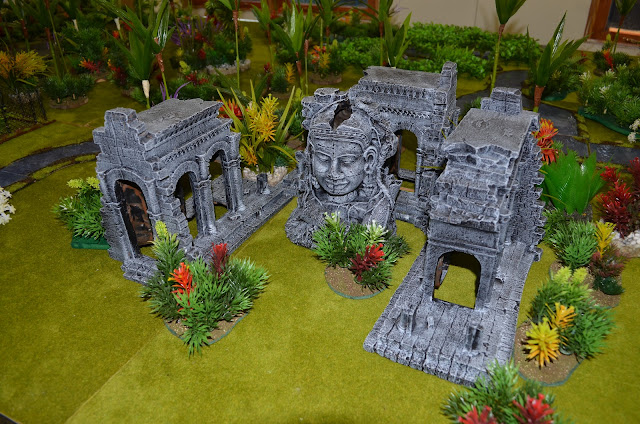 Indiana and his mates are investigating... 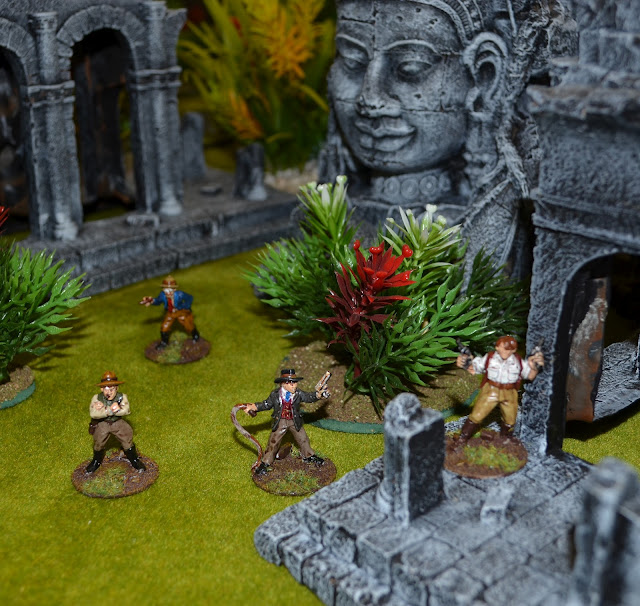 We skip to the humid jungles of South America where a ruined city awaits discovery... 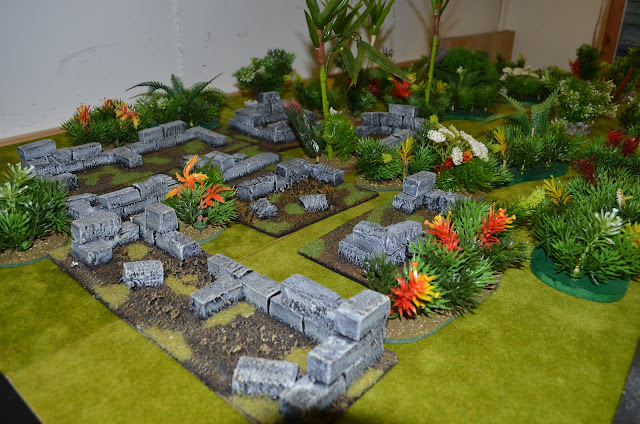 The mangrove swamps are trechorous and plastic 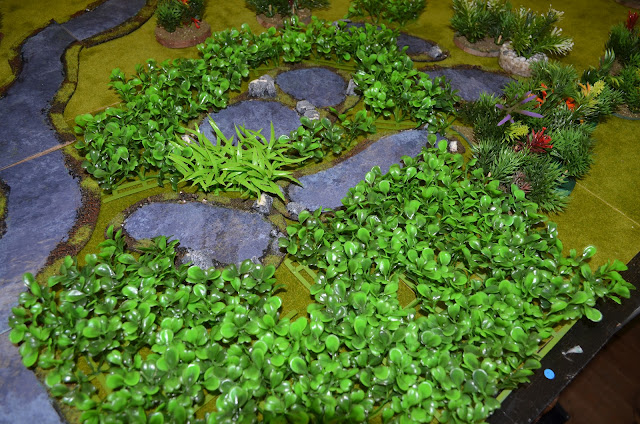 They are also home to some big beasts..... 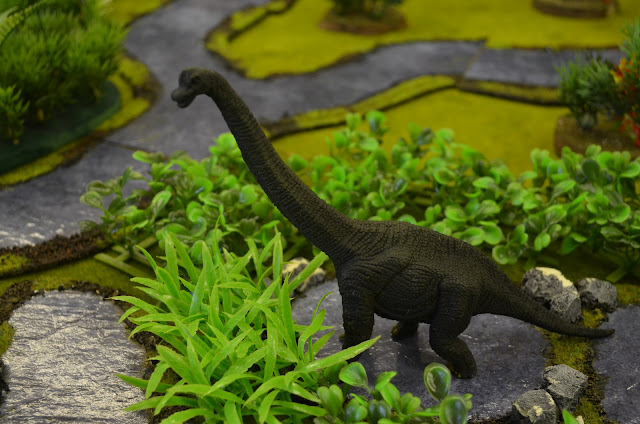 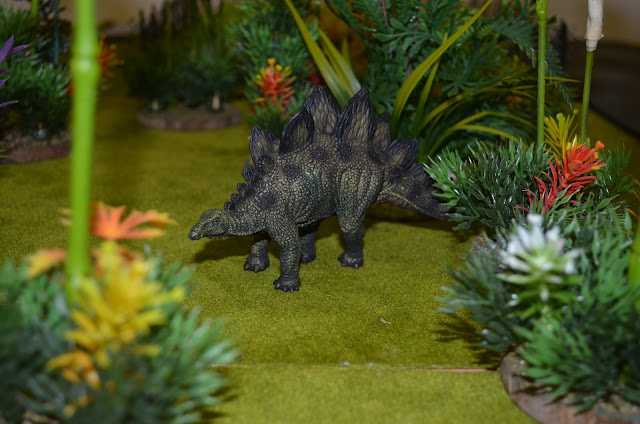 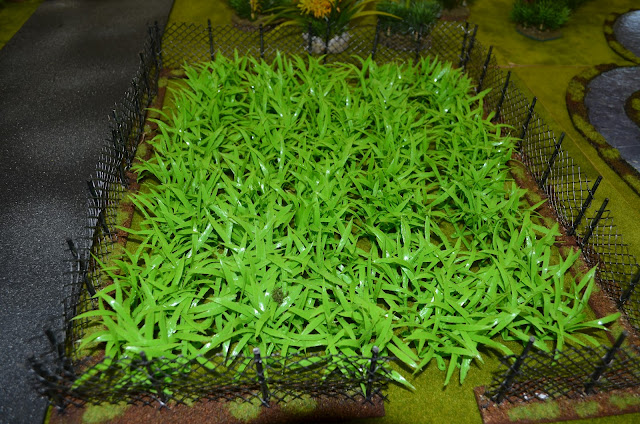 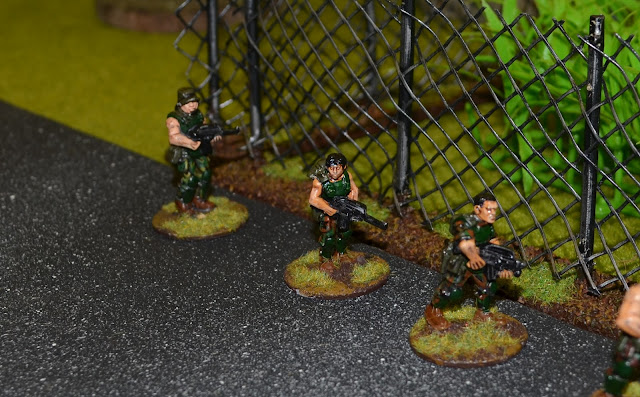 Patrols regularly protect the valuable crop...but...whats this something has escaped from Jurassic Park 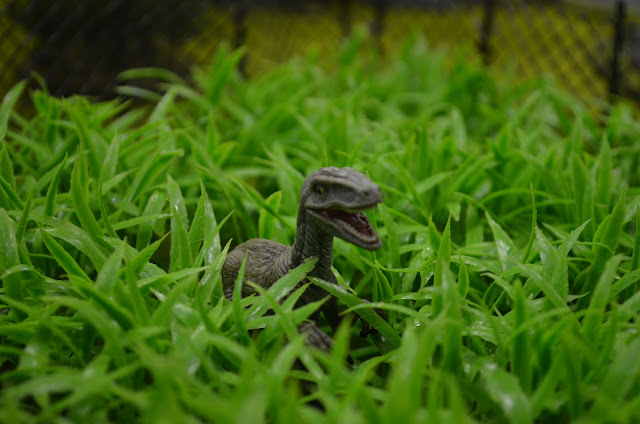 No jungle would be complete without these ultimate hunters...

I think he gets the gold medal.... 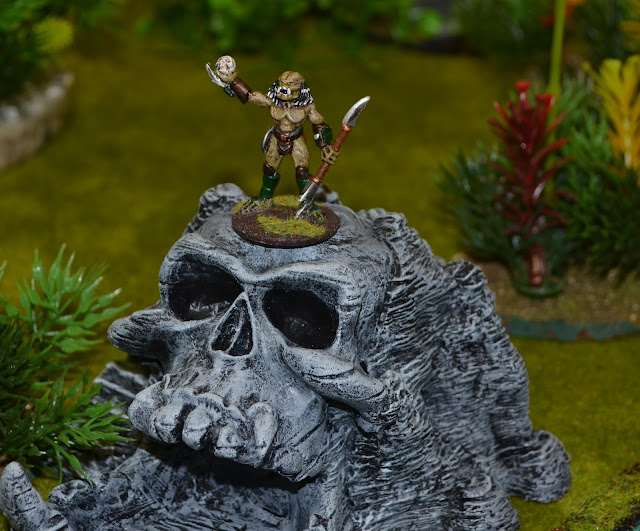 Welcome to the Jungle....shed style
Posted by Eric the Shed at 23:13 9 comments:

Sunday night saw the chance to play test a new set of home brew skirmish rules in the ruined city.

Titled War in Wastes they are loosely based on the Crossfire Rules with the main exception being that each units initiative is activated by card. These cards are shuffled each time the pack runs out. Extra spice is added with the inclusion of event cards (hidden snipers, random HE bursts etc).

This was a styraight forward engagement between two forces of equivalent size. The figures are all from the excellent Pig Iron range.

The following photos give a flavour for waht was a fast and furious firefight with neither side really getting the upper hand until the off tabl;e artillery found its mark.

Below you can see the left flank from the Rebel perspective - the counters signify no fires (white) and suppressions(red).. The rebels are holed up in a building facing incoming fire from a squad of marines.

On the right flank a Rebel Tank cruises up the side street towards the main thouroughfare. Infantry support can be seen to the right. Although powerful tanks in the rules are vulnerable to infantry assualt.

Below we have a raised road running across the table. This was siezed early on by a Marine Walker - it didnt last very long !
﻿

Runnng the length of the table was a wide road - efectively acting as a no mans land. You can see the road bridge with ruined bus in the back ground. A rebel waker has hit the dust from a Marine missile.

An atmospheric shot under the bridge.

Heavy marines advancing on their right flank suppoeted by an armoured robot. A ruined taxi adds a nbuit of local flavour. Most of the buildings are scratchbuilt but in this photo you can see one of the excellent Amera plastic ruins.

The Heavies didnt last long - they were soon wiped out by the staunch rebel defenders. Unfortunately the building they ran to caught fire criping what was left of the unit. Next time boys.

The Marines fared better with their snipers - three to be precise - two additional snipers appeared on the table and caused no end of mischief.

Meanwhile the rebel heavy Tank started to play its game.

Edging out into the road it started to seek out targets.

A rebel walker engulfed in fire down the alley by the bridge.

The tank then traversed its turret and took out the Walker on the bridge - for some reason this Walker became known as Barry.

Meanwhilst the Rebels gained two squads of infantry - the first entering on the bridge.

The second arriving on the right. These irregular troops quickly came under fire and did not last long

Rebel infantry defending a building and coming under heavy fire..

Finally the observers got into a advantageous postion. Heavy accurate artillery was called in.

Boom, Boom, Boom...a marine stronghold takes a direct hit. Killing all those in the building. The smoke is illuminated with a small torch.


With heavy artillery raining down and both sides now fighting a war of attrition we called a halt for the might. Beers and Pizza await for no man.
Posted by Eric the Shed at 19:03 6 comments:

Email ThisBlogThis!Share to TwitterShare to FacebookShare to Pinterest
Labels: Terrain, World of Apocalypse

Out of the paintshop and into town...

Following on from the build we managed to get six of the eleven cars painted and onto the table. Hopefully the following pictures do the wasteland warriors justice... 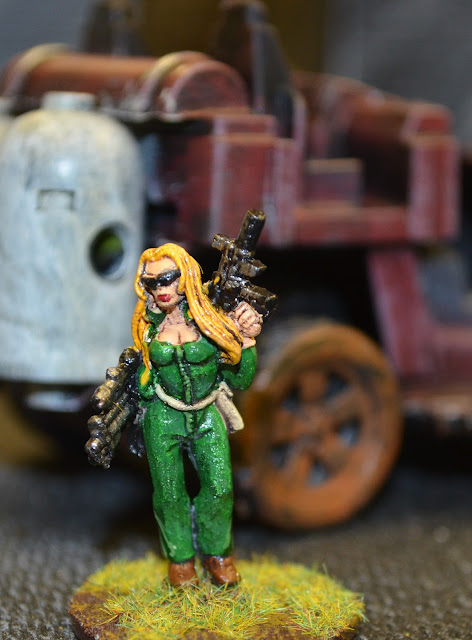 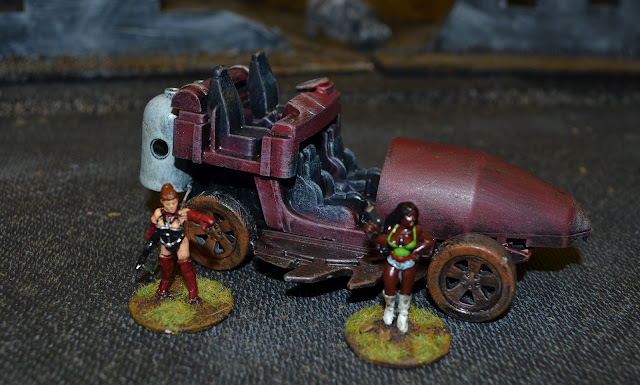 I think the engine has seen better days! 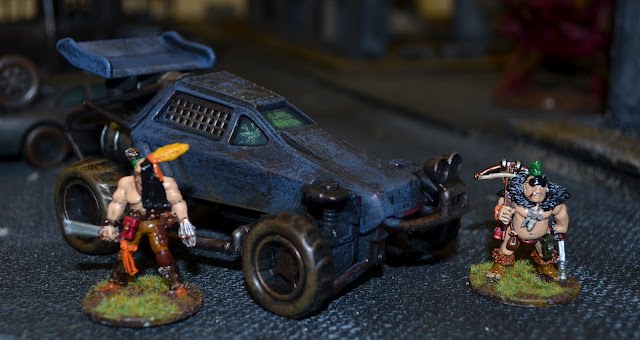 Phil Oakley of Human League is impressed with his new buggy

The Jamaicans hide behind their wheels.... 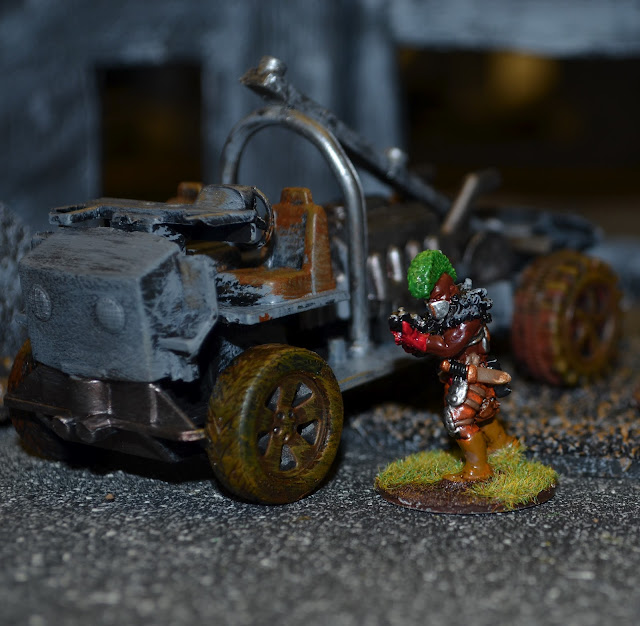 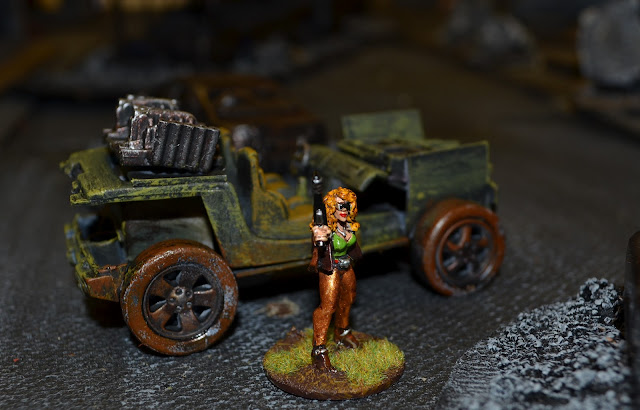 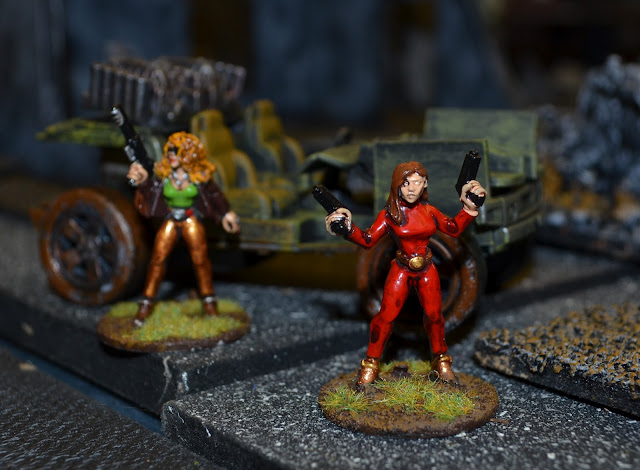 I think that body suit is very tight ! 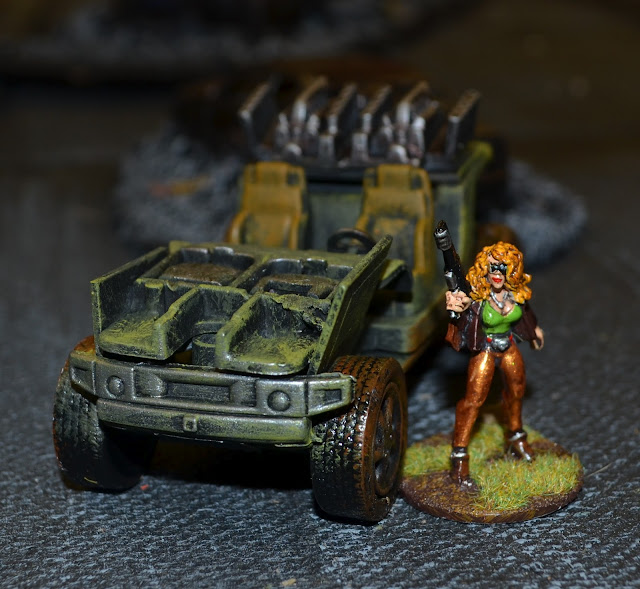 The Gold Hot pants were fun to paint 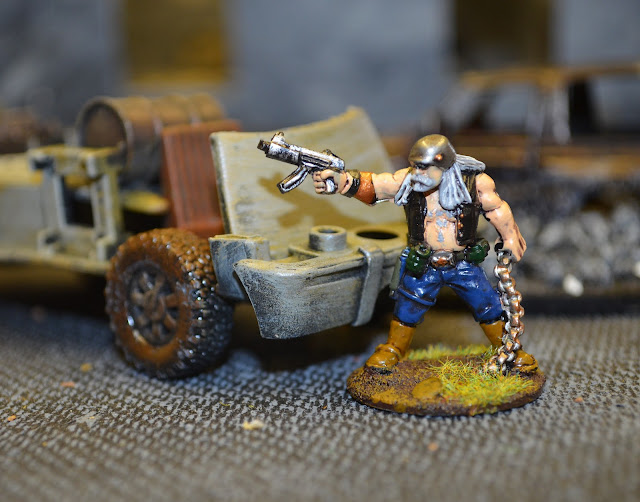 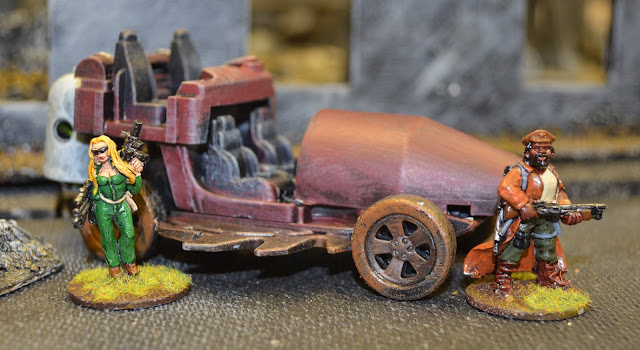