Battle of Edgcote - a 28mm wargame

Welcome back to the next instalment of our War of the Roses scenarios. This particular engagement is a representation of the battle of Edgcote fought on the 24th July 1469. Please note I have taken some liberties with both the forces present and the table to make this a game worth playing for both sides.

Mark F and I would lead the Lancastrian rebels whilst John and Mark K would command the Yorkist cause.


The battle took some 6 miles (9.7 km) northeast of Banbury in Northamptonshire;

In April 1469 a rebellion broke out in the North lead by a mysterious figure known as Robin of Redesdale. History knows very little of this man. Confident that this revolt was being dealt with by John Neville (now Earl of Northumberland), King Edward IV, along with his personal troops, was marching north. It soon became apparent that this rebelllion was gathering strength and now very much supporting the Lancastrian cause. No doubt spurred on in support by Warwick (now estranged from Edward).

Realising this was nop ordinary revolt and troubled by news that Warwick had landed in England from the continent Edward instructed his forces in Wales (lord Pembroke) and the west (earl of Devon) to meet him at Nottingham. As these two forces marched into the midlands they soon encountered the rebel army now under the command of Sir John Conyers.

Rumour has it that the Yorkist leaders disagreed over billets for the night and with no King Edward in the field Devon lead his forces away leaving Pembroke to face a superior army on his own. Unfortunately for the Yorkist cause the forces under Pembroke were predominantly spear and other foot. The majority of archers were under Devon's command.

Unlike Pembroke's force the rebel army contained a large contingent of archers, putting Pembroke at a disadvantage; he ordered his troops forward and the two sides fought at close quarters for the rest of the morning. By early afternoon, the Yorkist army had gained control of the river crossing, but at this point, Warwick's advance guard arrived upon the field, led by Sir Geoffrey Gates and Sir William Parr.[9] Gates and Parr were able to hold the rebels together, but they were still under severe pressure when further rebel reinforcements arrived, led by John Clapham.

History does not record whether Decvon arrived to support Pembroke but in our game we will assume he might. Casualties were reported as 168 knights and gentry, plus 2,000 rank and file, losses significant enough to be remembered and referenced by Welsh poets a century later.

Pembroke was captured and executed at Northampton later in the week, on Thursday 27 July; his brother Sir Richard Herbert had been executed the previous day, Wednesday 26 July. Their half brother Sir Richard Vaughan died during the battle and Devon was beheaded at Bridgwater on 17 August.

There are few details on rebel casualties but they would have been considerably less than those suffered by Pembroke since most deaths occurred during a pursuit. Apart from Henry Neville, killed on the evening before the battle, these included Sir William Conyers, and Sir Oliver Dudley, youngest son of John Sutton, 1st Baron Dudley.

The orders of battle (below) reflect that the Yorkist army was both outnumbered at the onset and suffered from a distinct alack of archers (there were with Devon). The Welsh spears are portrayed as pikes in the game

Despite the lack of information on this battle it appears to have been a relatively straightforward engagement with the Lancastrian rebels under Conyers routing the forces of Raglan. However to try and make this an interesting game and one which the Yorkists might stand a chance we elected that the Yorkists forces might benefit from the appearance of Devon's forces sometime during the game. The appearance of these troops could conceivably tip the balance.

Both Yorkist and Lancastrian resrves are off table at the beginning of the game and may/may not appear during the engagement. Each Reserve force is denoted as an 'Ace' from a pack of cards. The Lancastrians use the Hearts suit and the Yorkists the spades. The Aces are shuffled into the respective pack of suit cards and each turn turn over one card for both sides. Should the Ace appear the reserves march on from the rear of the table (dice for location) - the Reserves cannot appear in the first four turns. When the reserves appear add their morale tokens to the pot.

We set up the battlefield between the two villages of Culworth and Thorpe Mandeville. Given it was summer we elected to place a few fields with crops growing. The Battle actuially featured several huills but we elected to forego these. 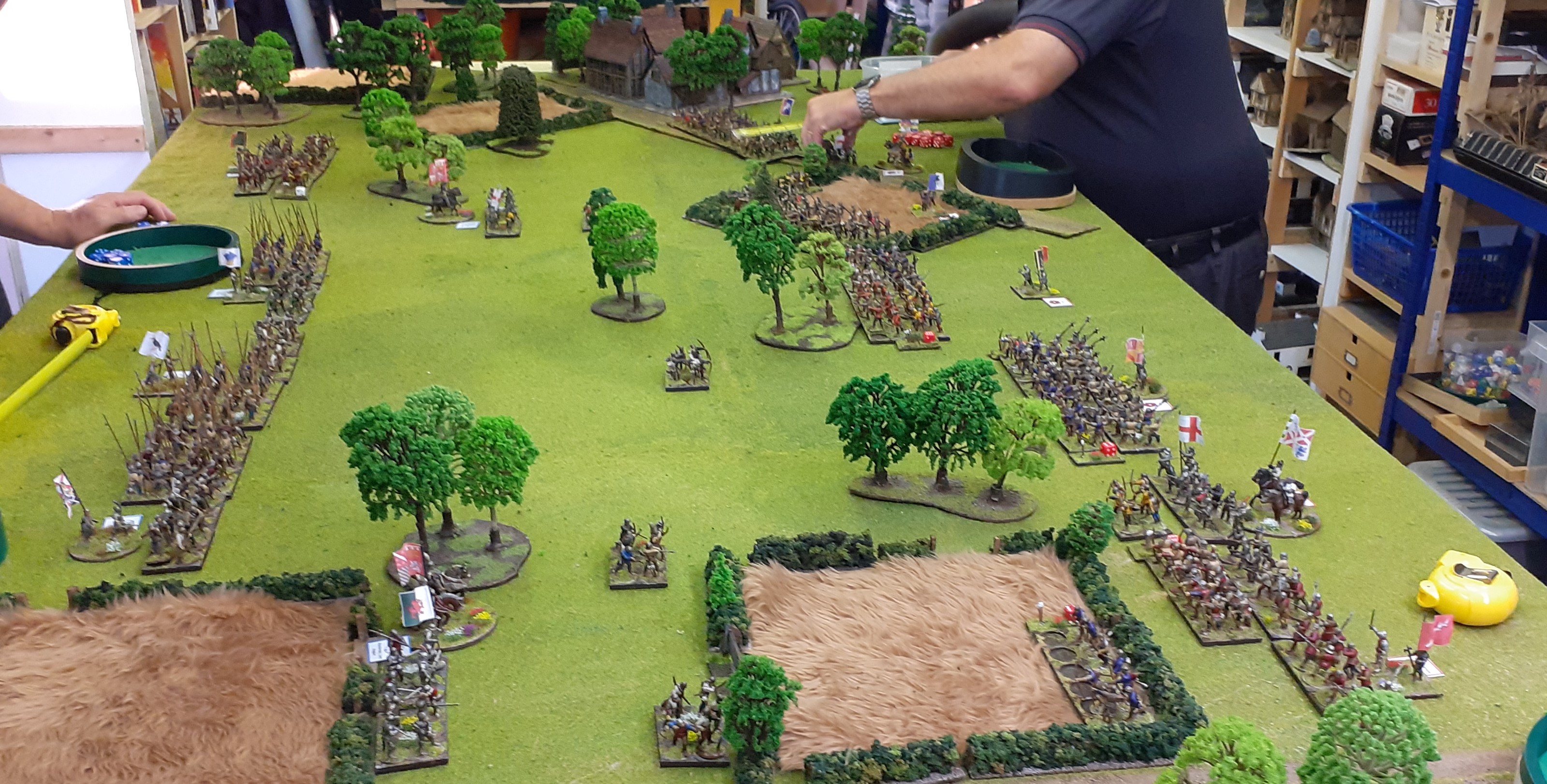 With the forces set up both sides jockeyed for position in the maneuever phase. Recognising they were outmatched by archer the Yorkists pushed up on the wings whilst the centre held firm with the welsh spears (pikes) 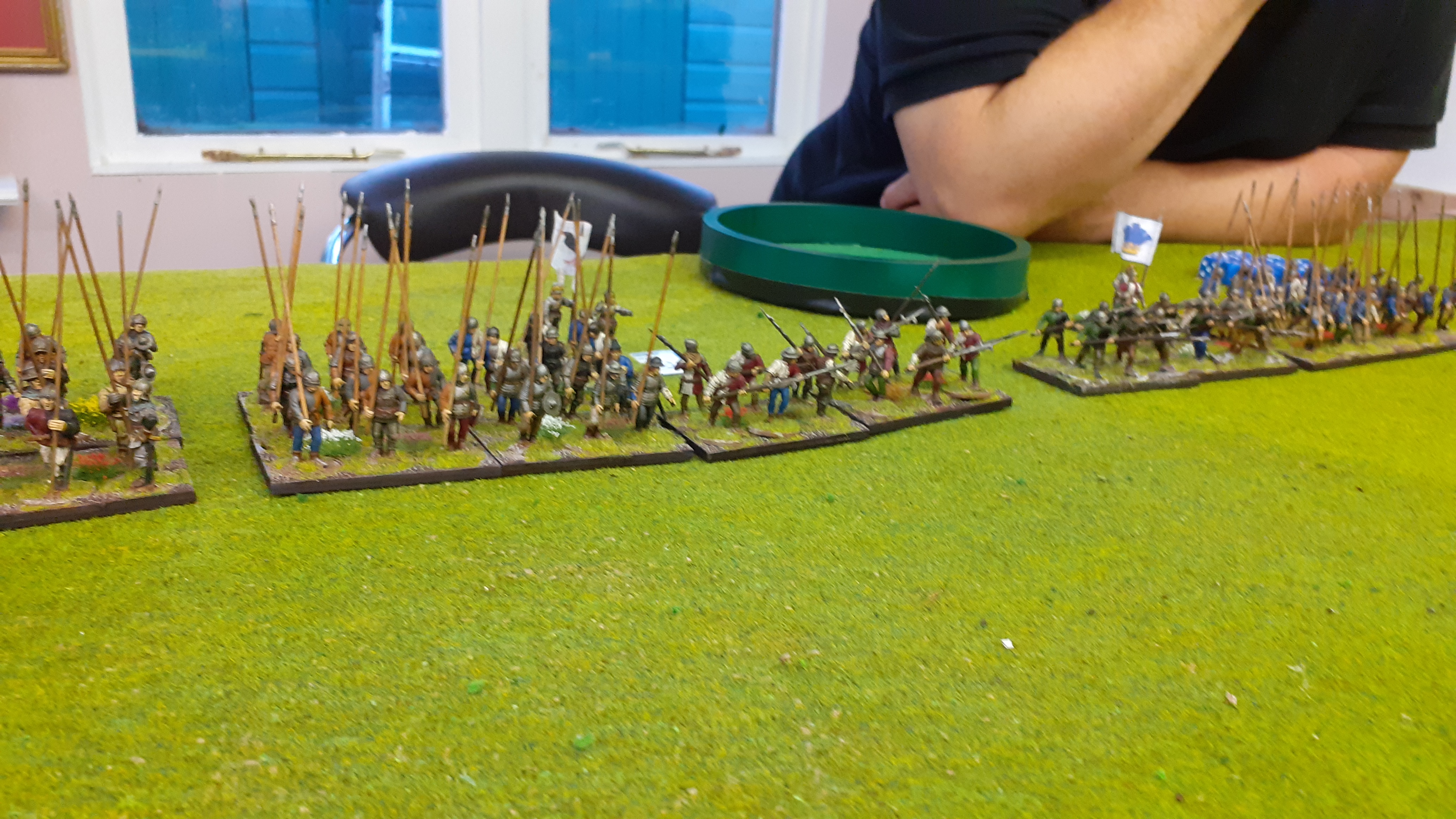 The Yorkist forces push forward on the Right wing - the fields in full crop slowing down the advance. 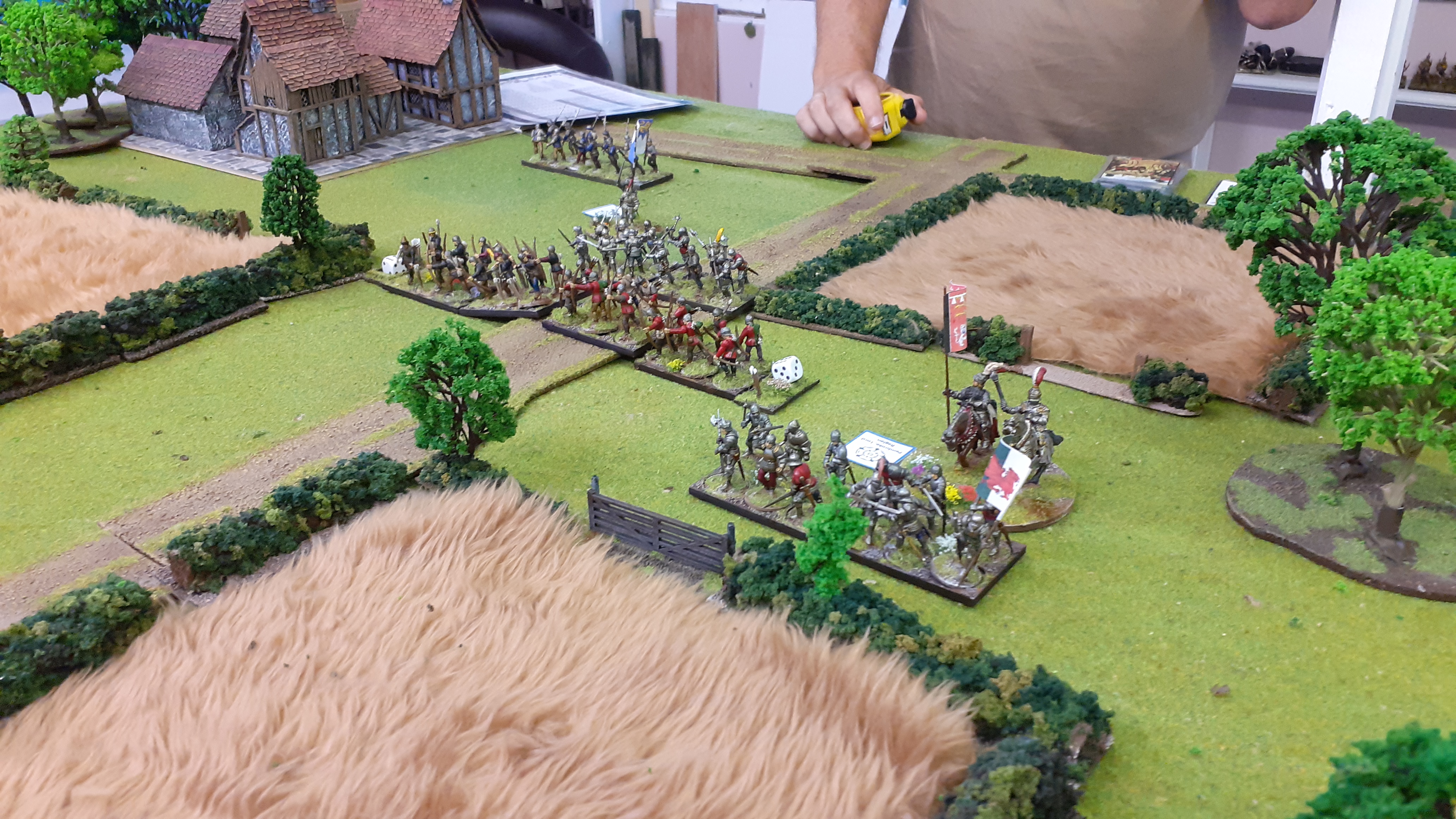 The Lancastrian centre massed it archers ready to blunt any advance. 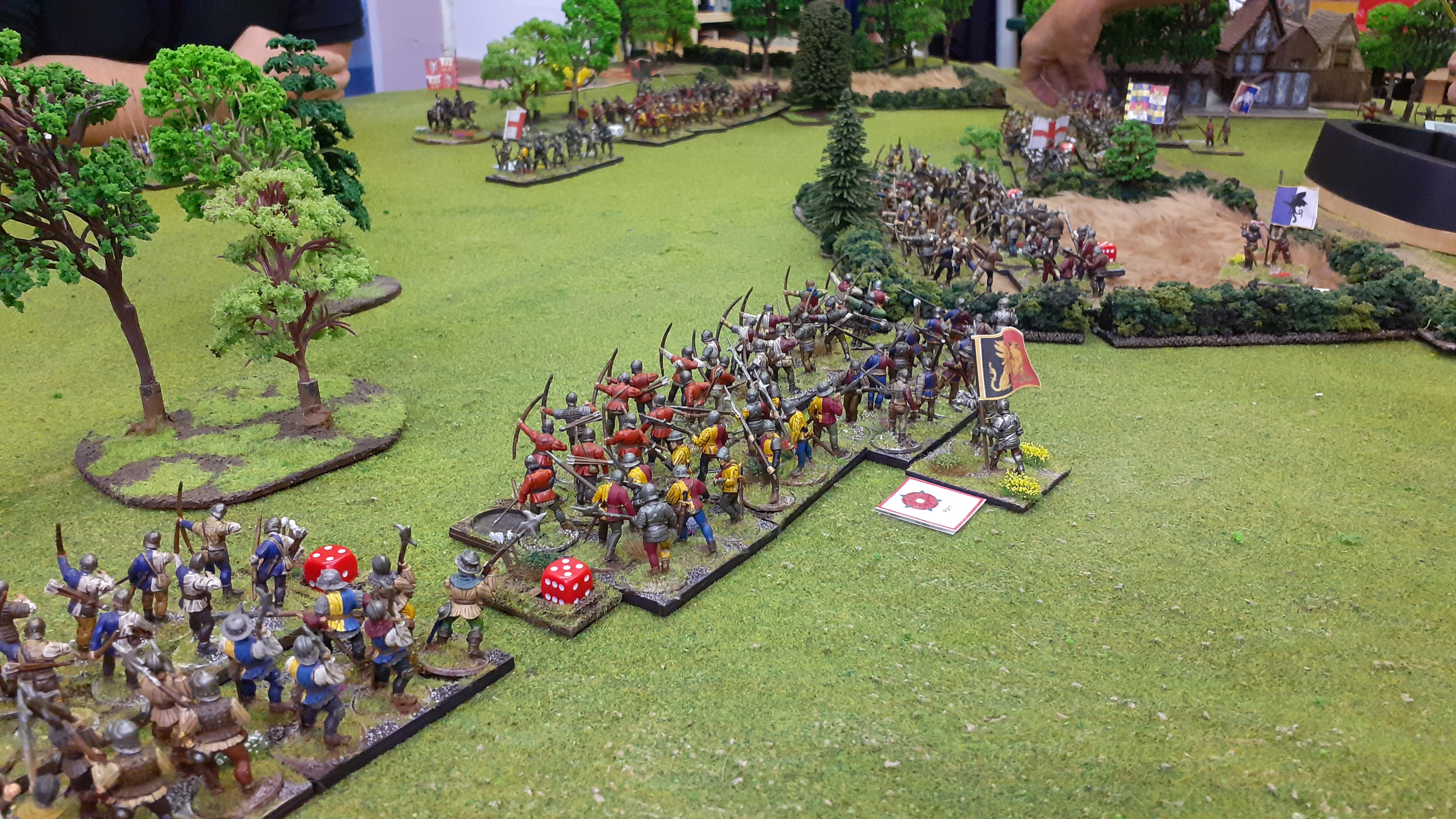 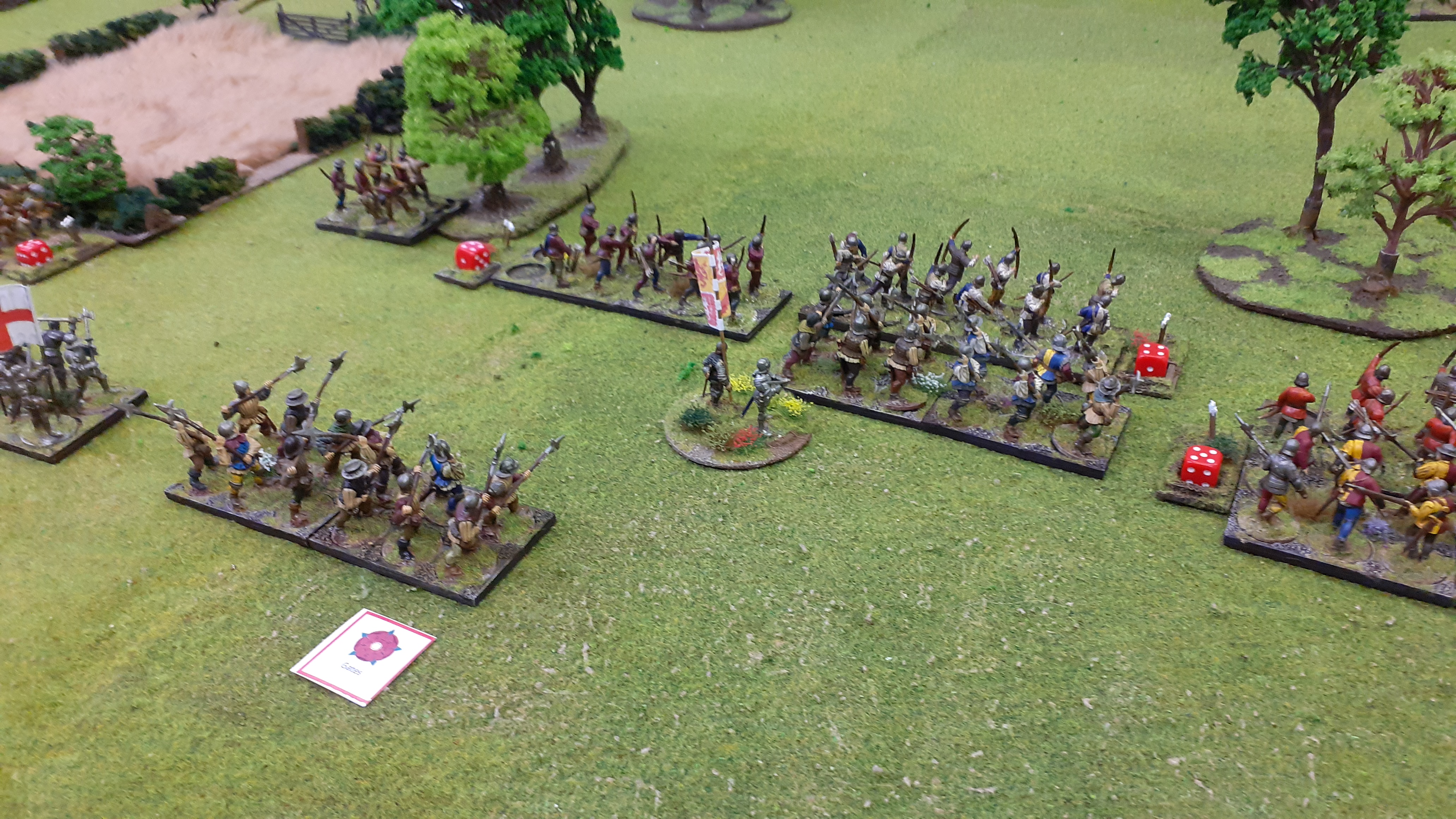 Whilst their right wing was fixed in the fields offering great cover. 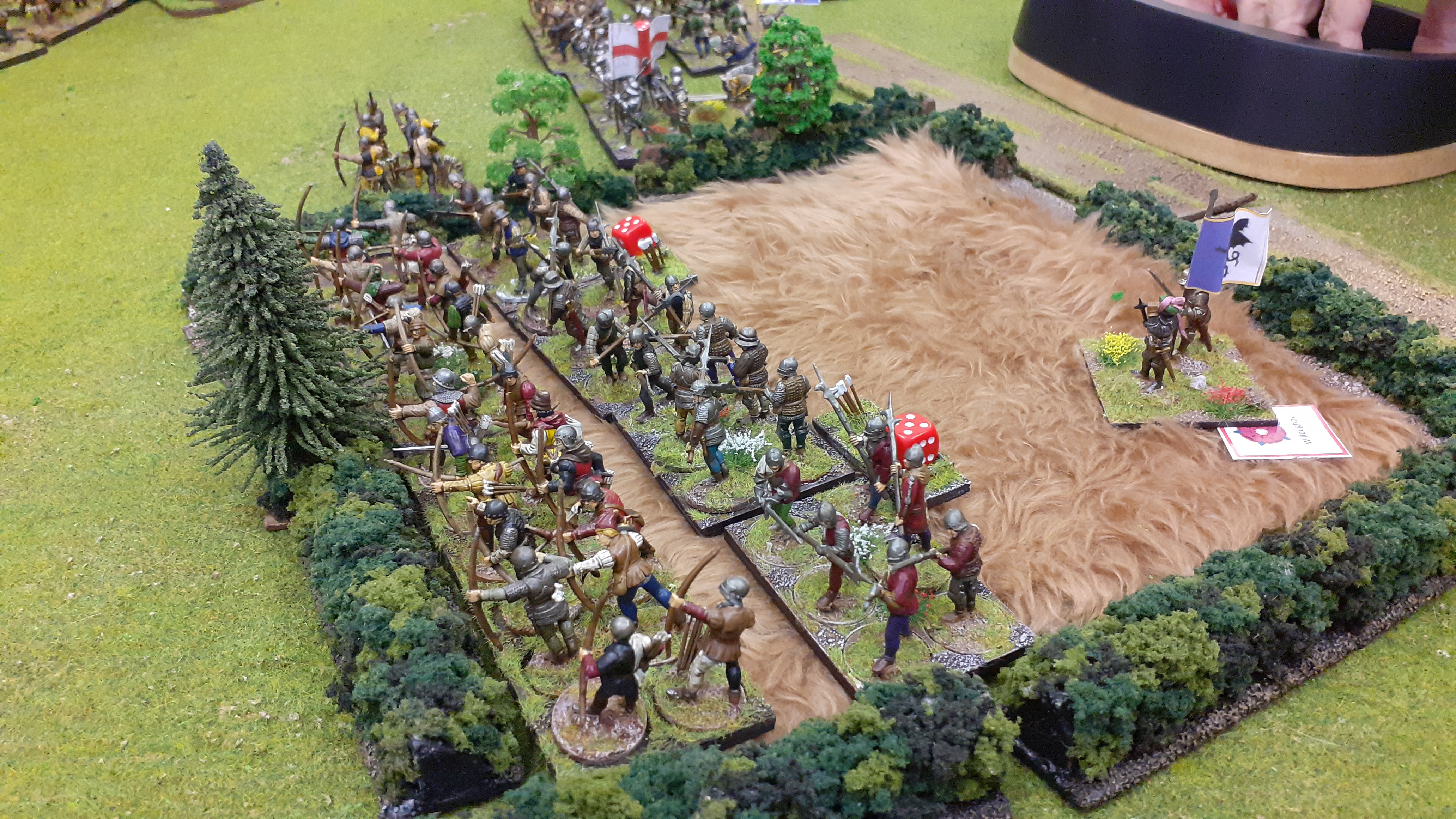 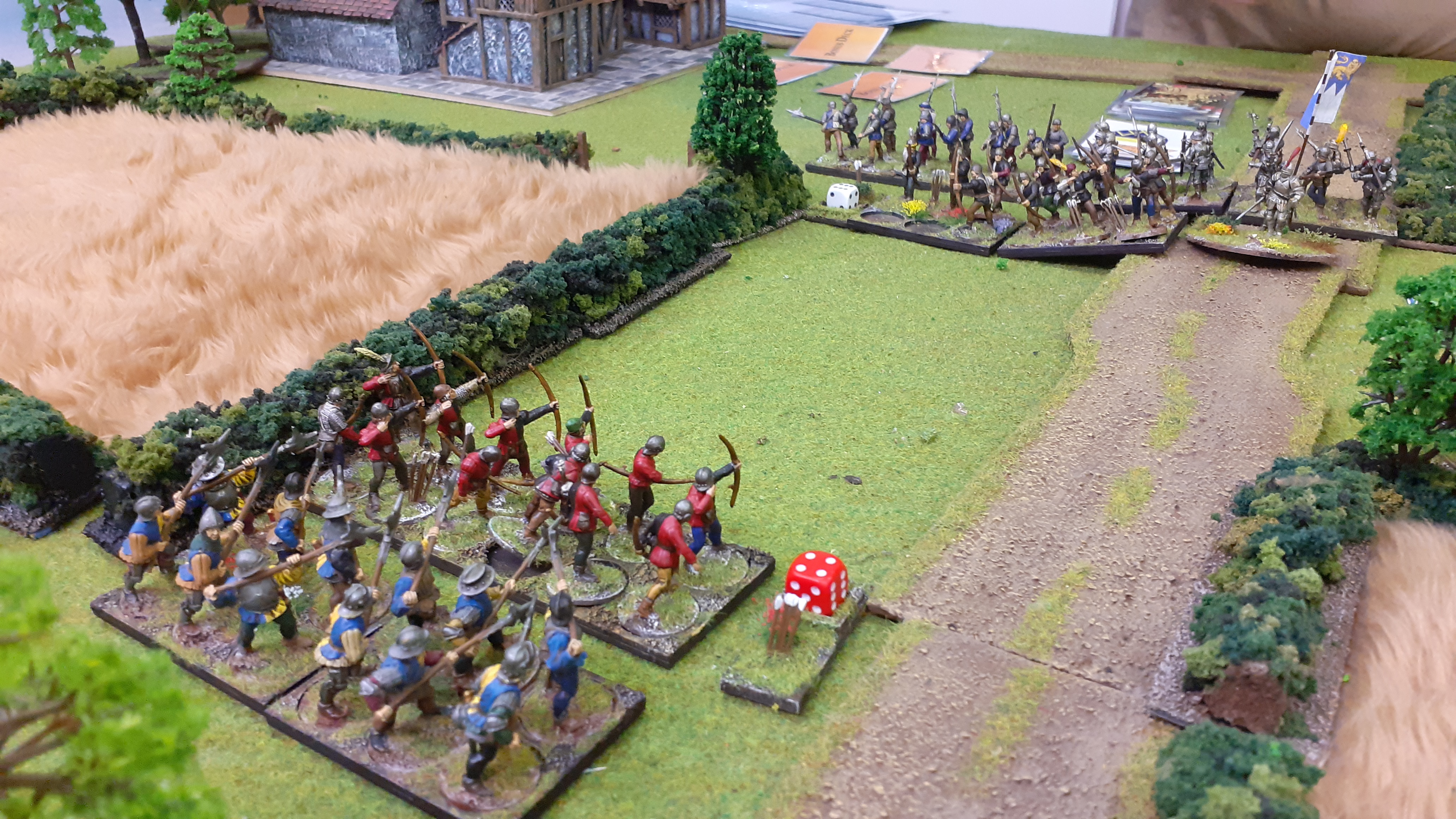 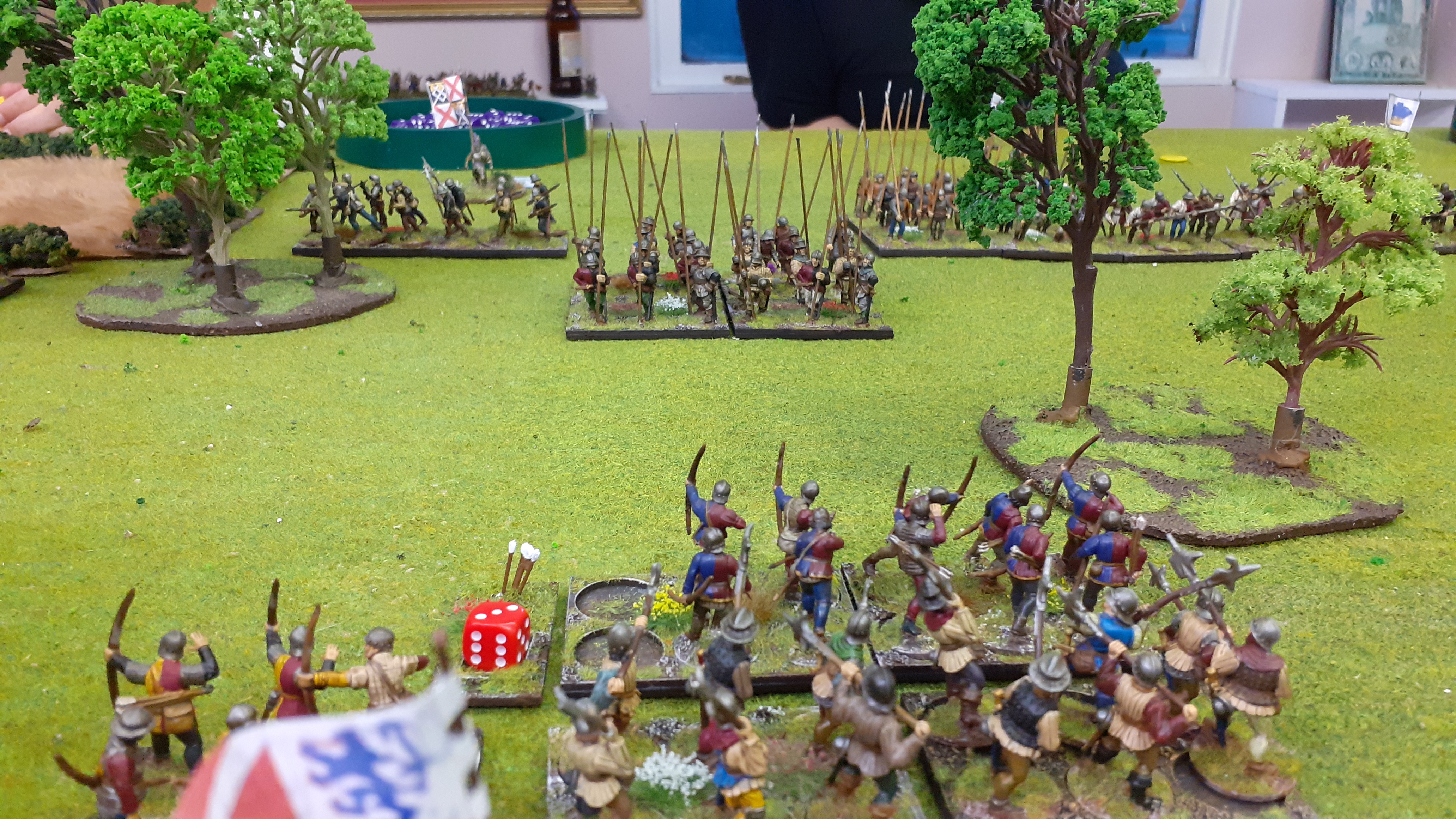 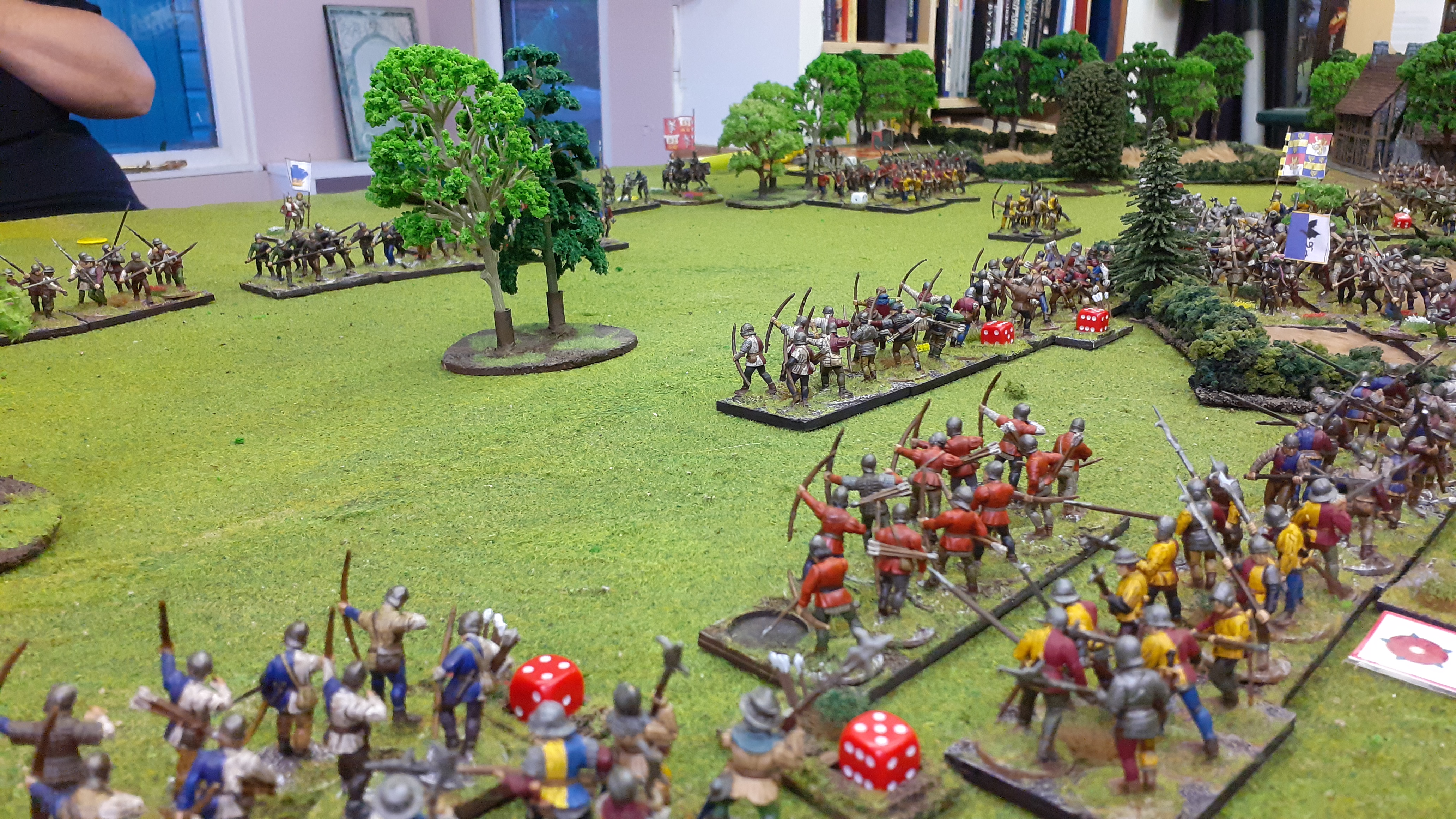 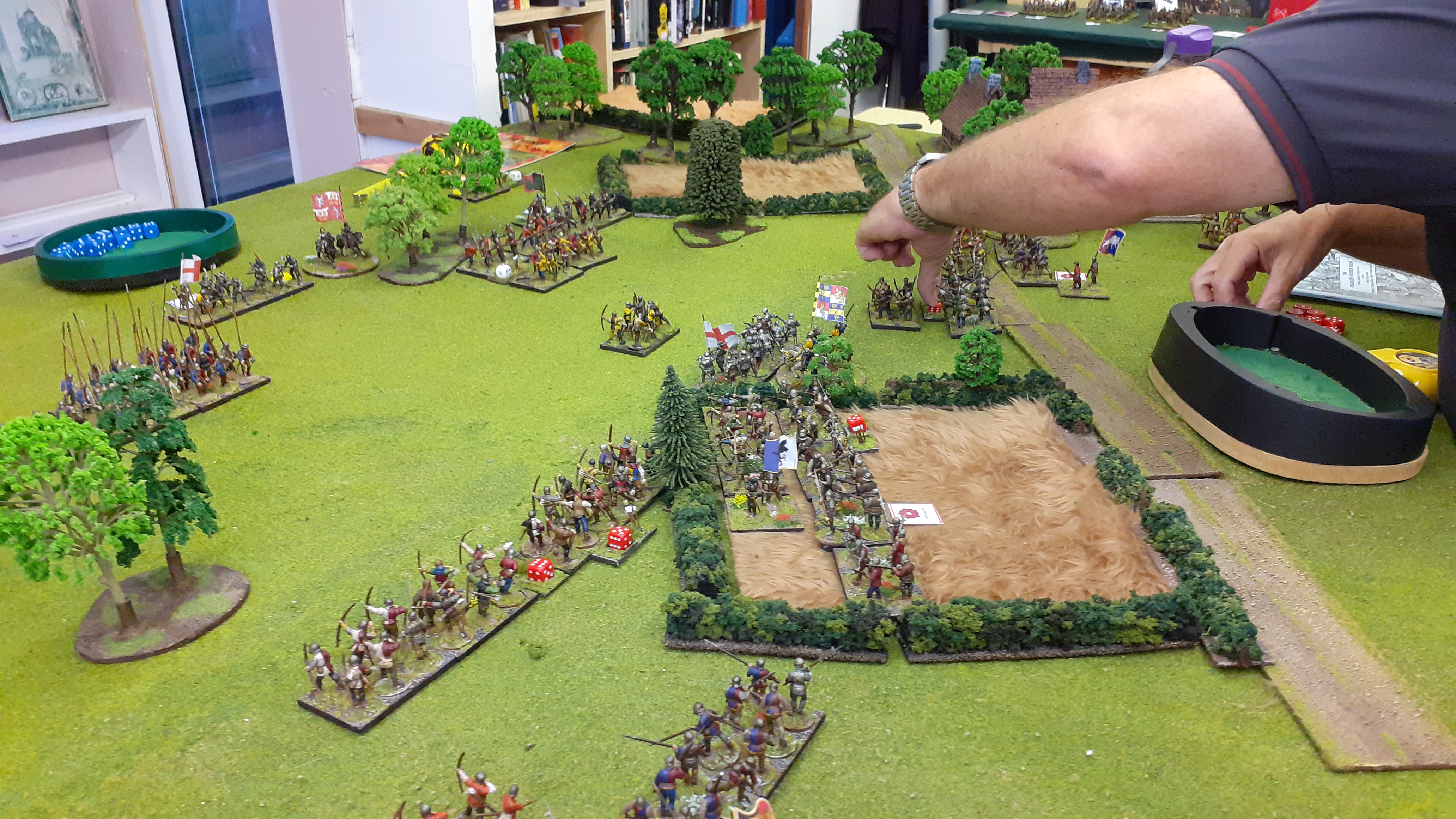 Their left wing just holding back the eager Yorkist commander. 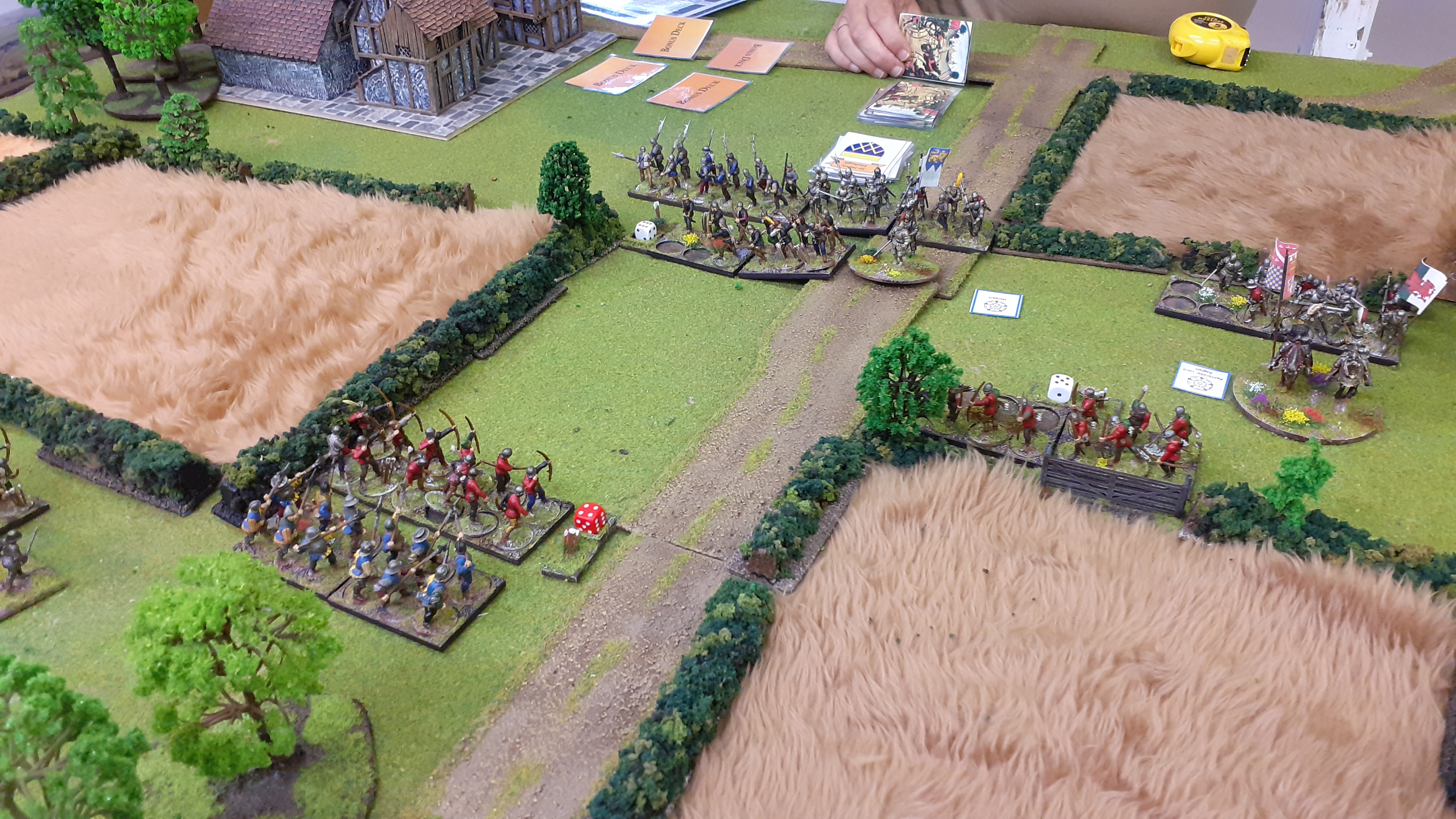 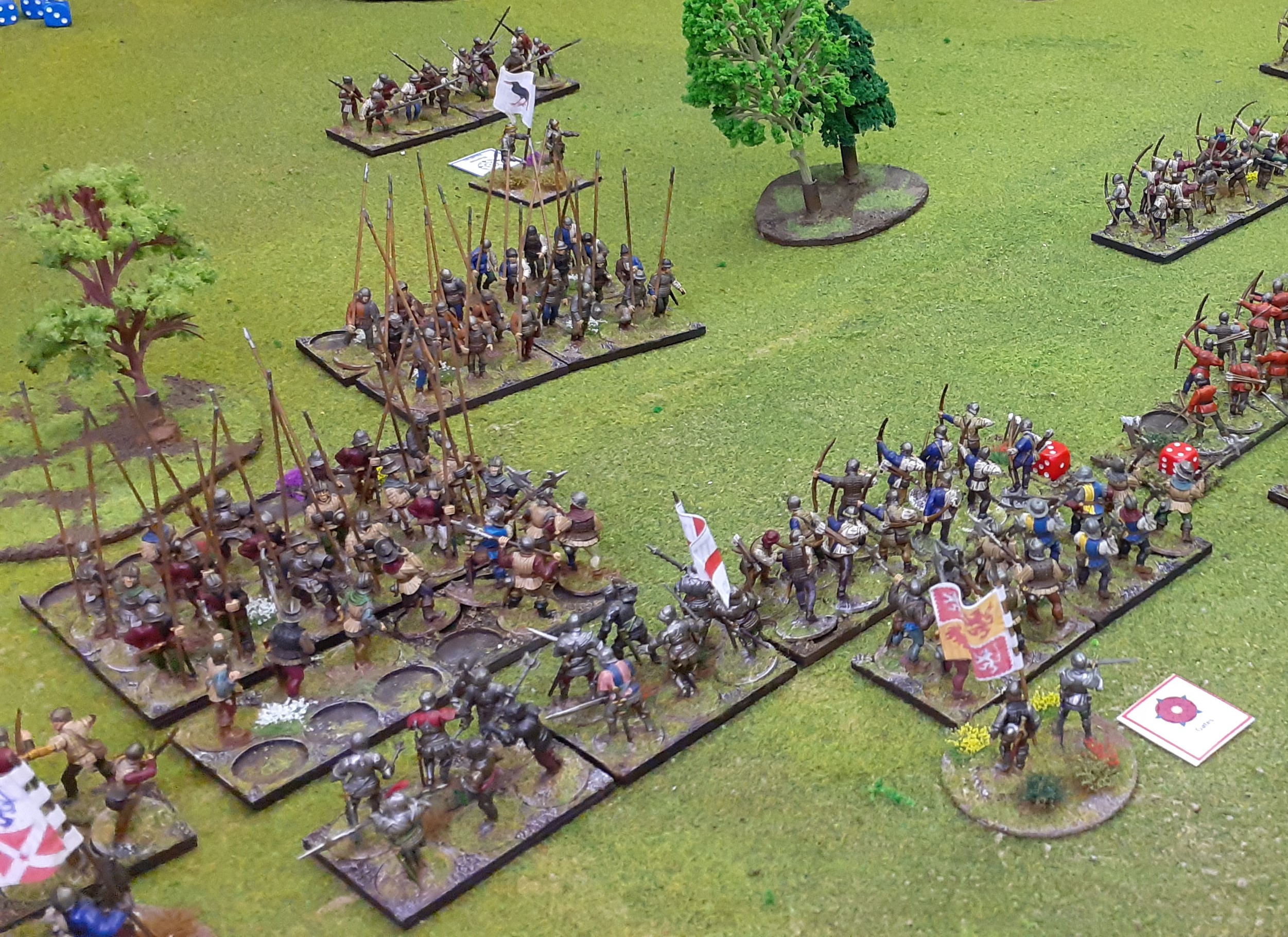 Despite the Yorkist advances in the centre the Lancastrians were massing a big push on the right wing. This was starting to tell on the Yorkist morale pot. 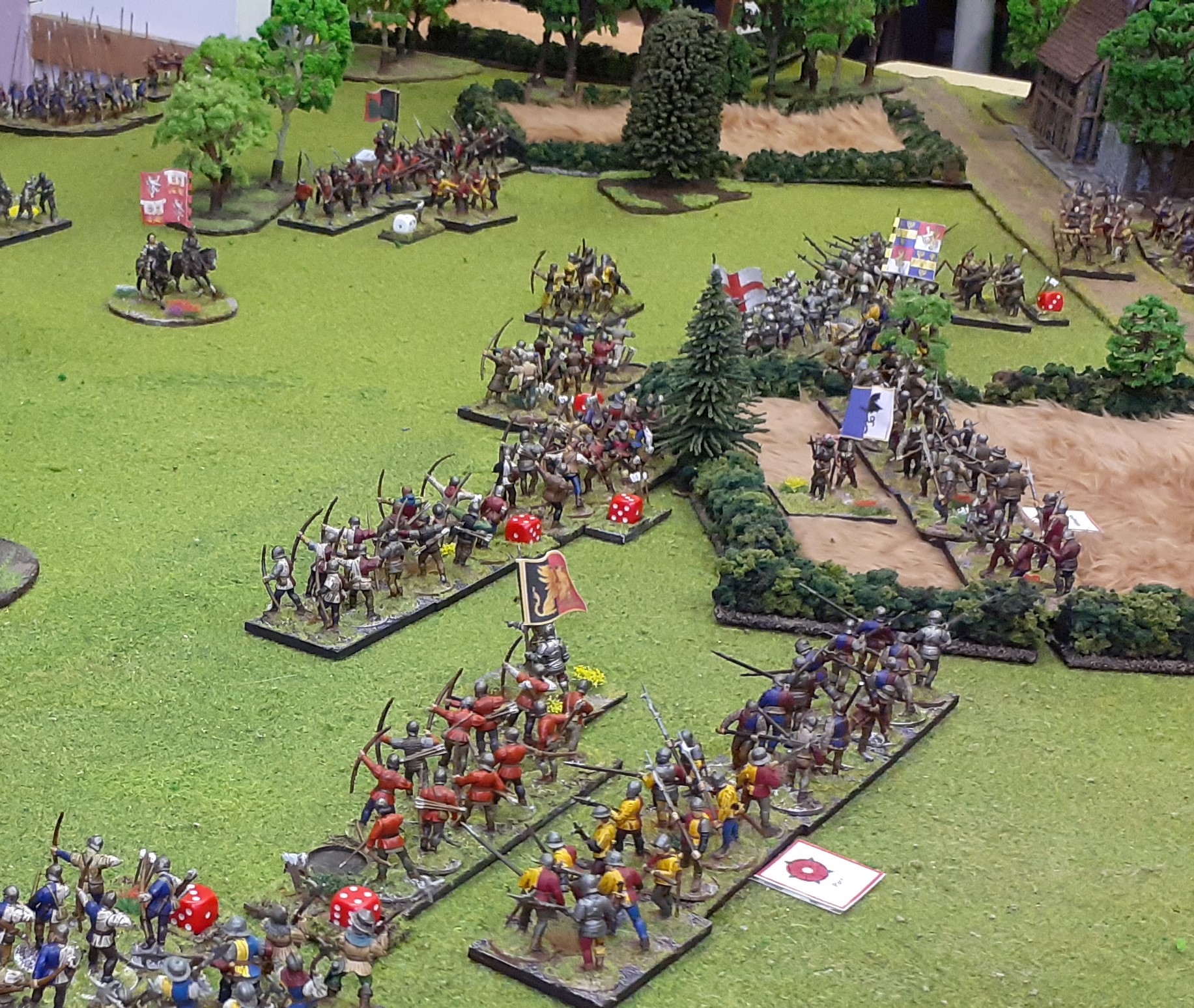 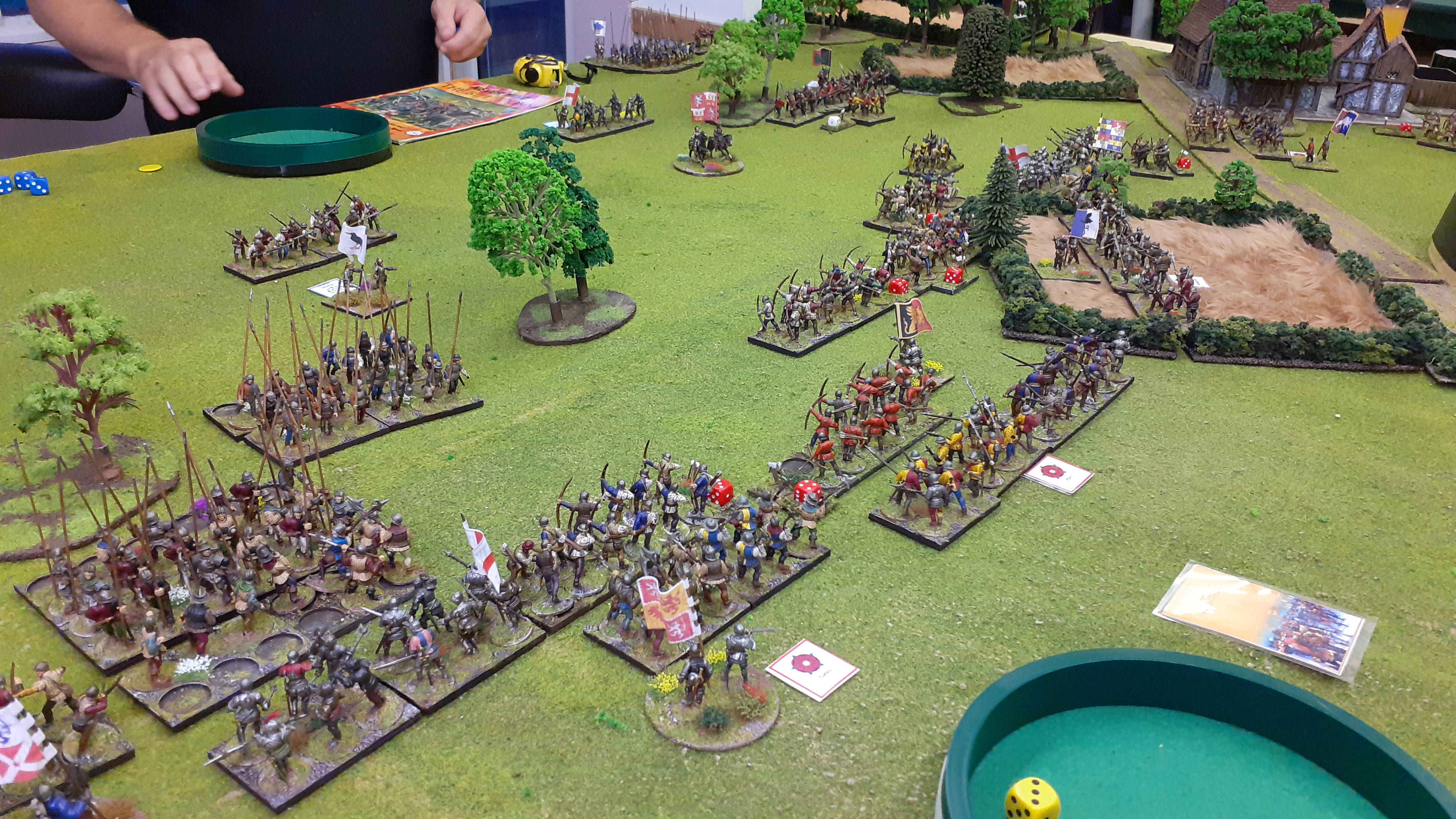 The Pikes were still pushing forward but were still taking heavy fire and were now having to deal with the Lancastrian bills and foot knights. 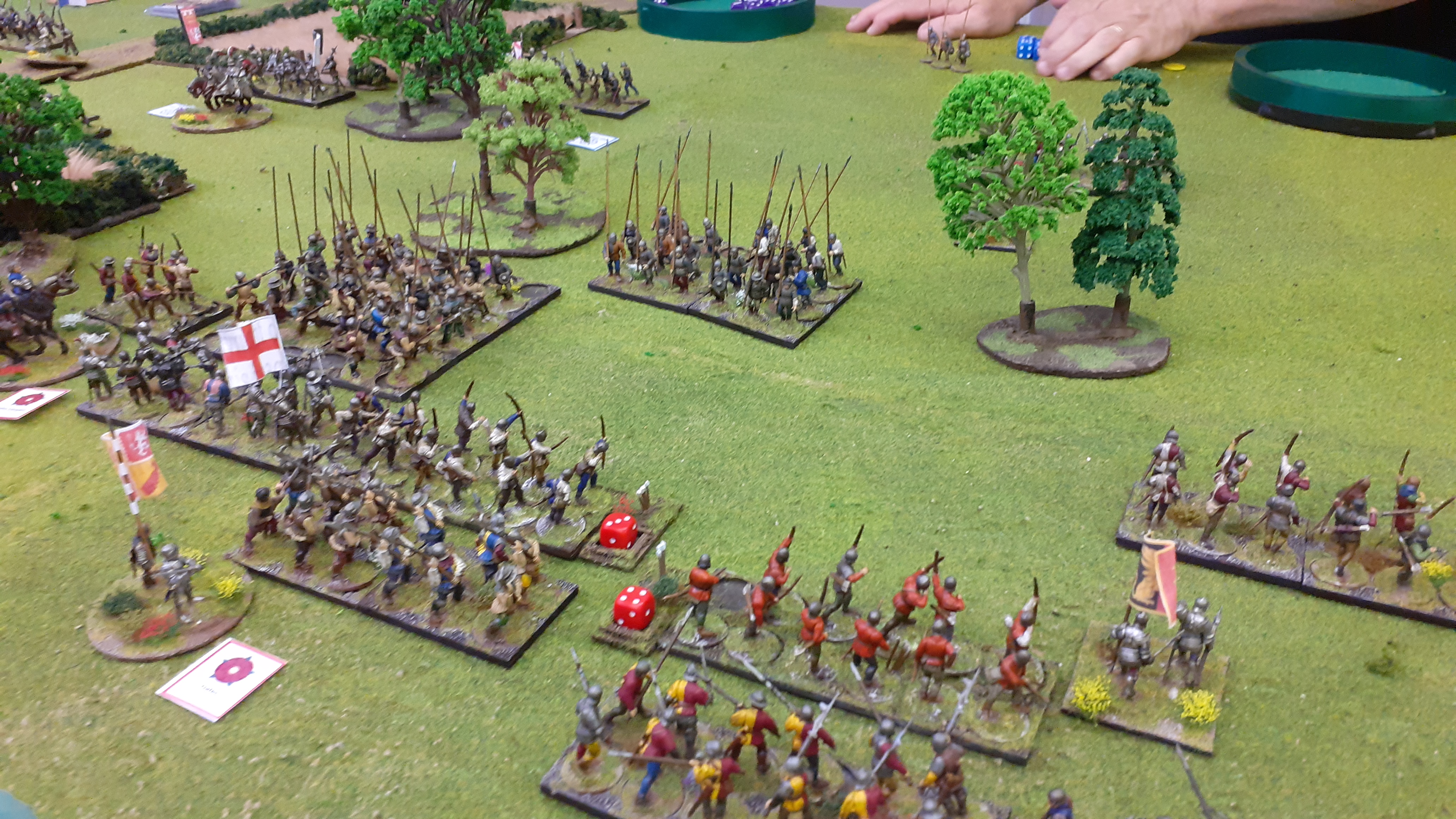 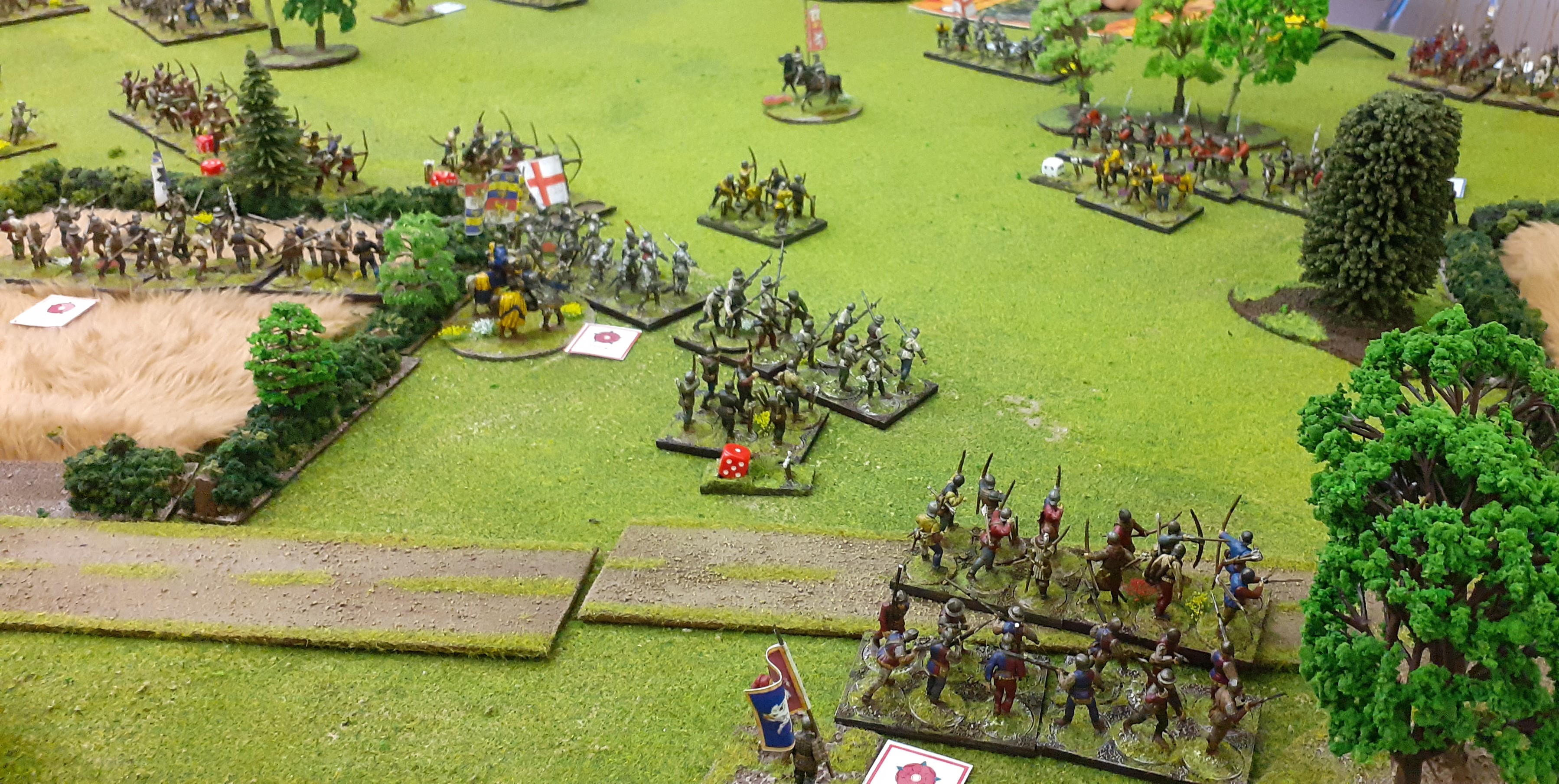 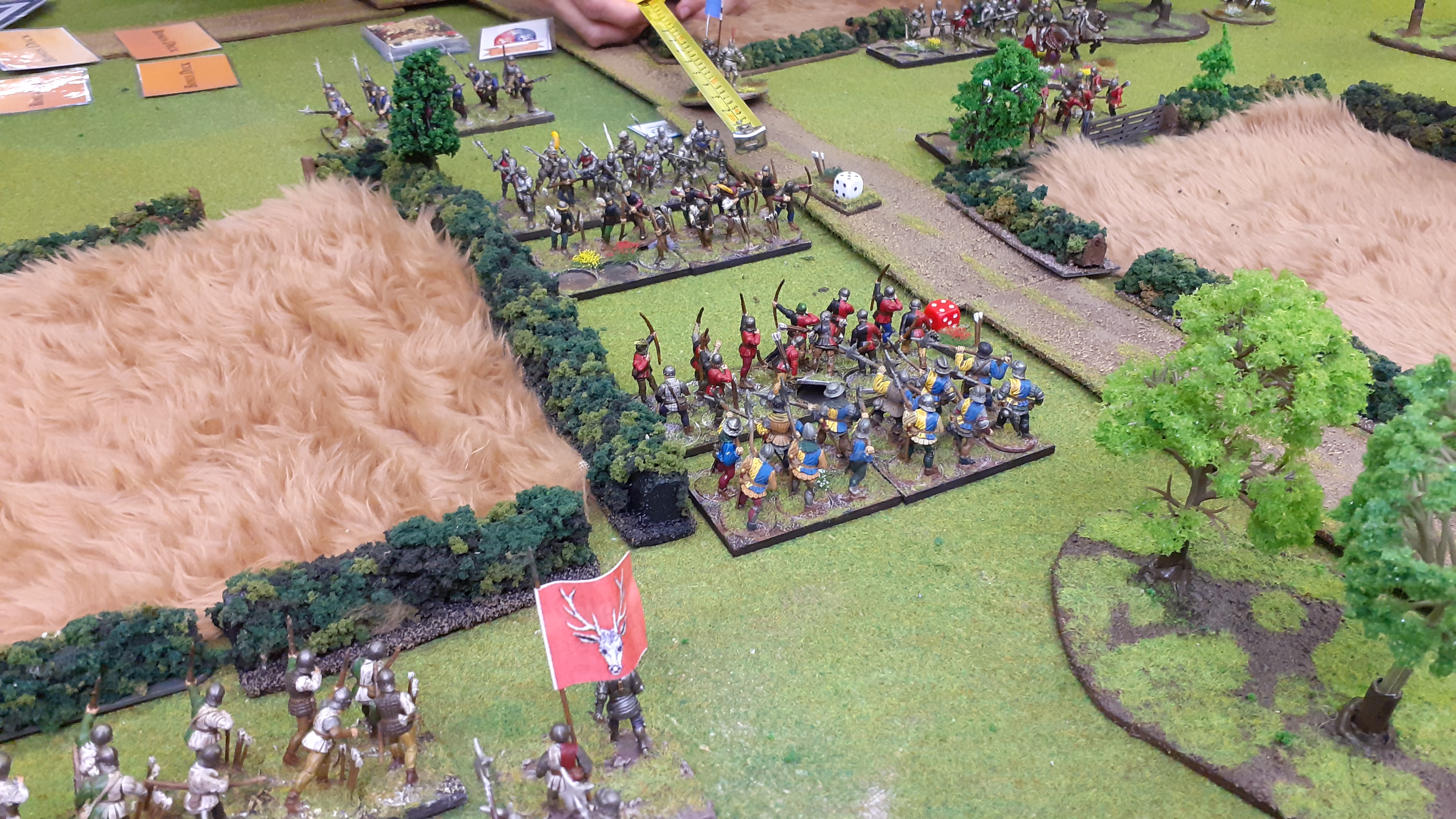 A unit of Welsh knights pushes forward on the rebel right and crashes through effectively wiping out rebel resistance on the flank...if those reinforcements from Devon can arrive the Yorkists might just snatch the victory 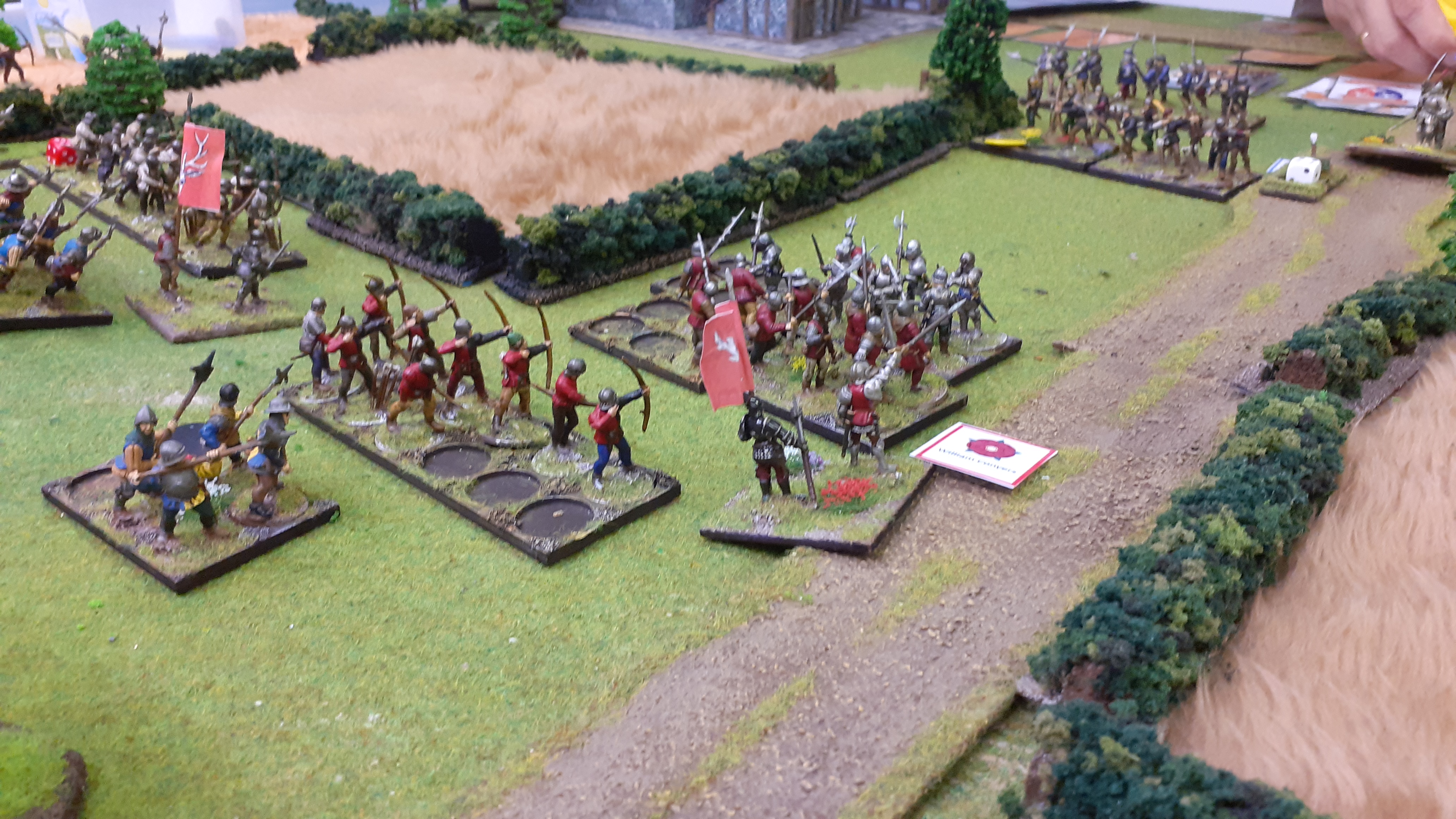 Their prayers are answered as Devon's forces arrive - archers, men at arms and knights in the vanguard.

But its all to late as the welsh spears succumb to a brutal charge from the rebels men at arms. A single unit in the centre fails its morale and takes much of their force with them in rout... 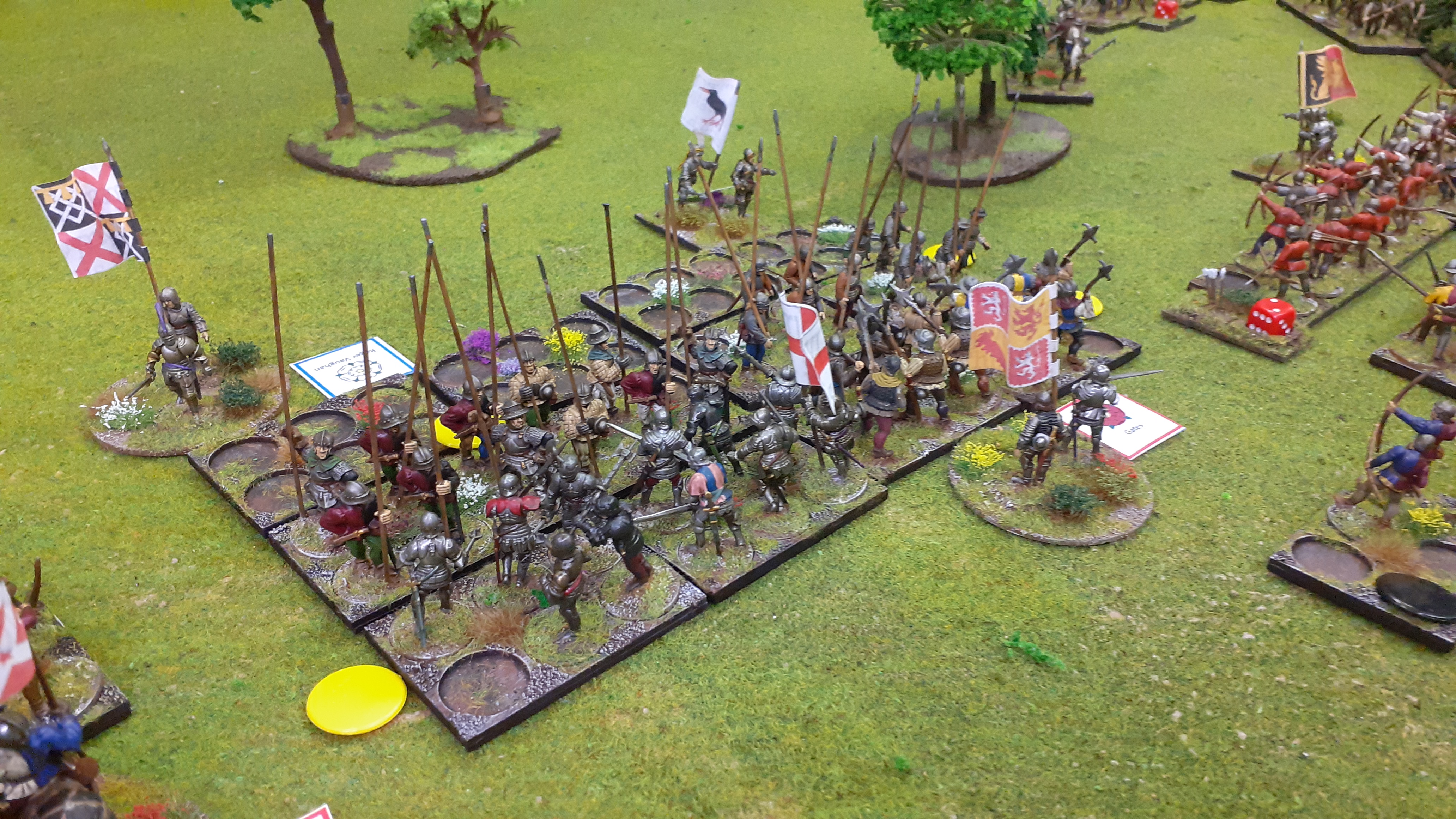 And that Ladies and Gentlemen was our refight of Edgcote - not entirel historic but it gave a great game.
What's next - well in a couple of weeks we head to Barnet.
More soon
Posted by Eric the Shed at 16:25 5 comments: