The Hundred Years War: Henry V versus Joan of Arc

Well a bit of a change this evening to the usual fare we decided to play 10mm Warmaster Medieval. We agreed on a 2000 points aside game featuring a ficticious battle between the chevauchee forces of Henry V versus the latter Hundred Years forces of Joan of Arc.


I created the army lists before Mark I arrived and we diced for the forces, this way I could not be accused of picking the best side. For those of you interested they were as follows


As can be seen above the English forces (being Chevauchee) have more mounted troops, significantly more missile troops but are distinctly lacking in infantry. Aside from the Knights and the Seargeants all the forces were unarmoured.

We rolled for terrain placement and then lay out our battles. We agreed that we would keep each contingent to a maximum of four units for ordering purposes (as per fantasy warmaster) as opposed to moving battles on mass.

Now apologies here but after the first five photos the camera packed up so rather than write up a pictorial AAR I can only show you a few photos of the early part of the game.

The English started (me) and rather fortuitously I got all my orders – in Warmaster to command a unit to do something outside of initiative you need to roll under the leaders command skill on 2d6 – this is mofified for terrain, subsequent orders etc). It does mean that sometimes forces you want to move never budge – and I was able top advance along the line towards the French and securing the woods in the centre and on my right flank.


Mark unfortunately wasn’t able to move as many troops but he did manage to bring up his missile troops on my right flank and managed to score a few hits. Blood had been drawn and the battle commenced. 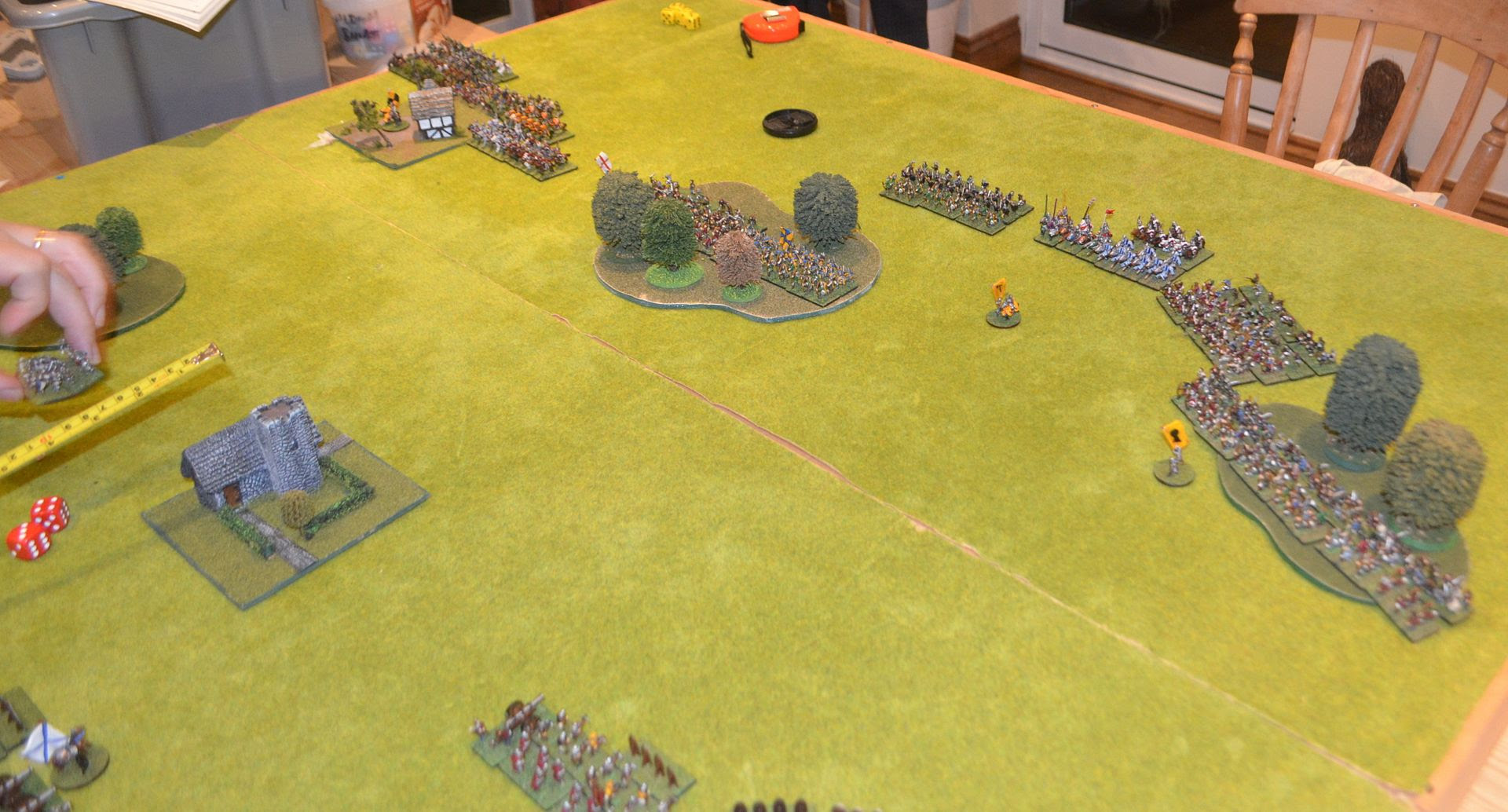 It all went a bit wring for the English after this charge, the French Infantry advanced and began to throw their weight around. Some lousy dice and poor judgement calls put my English on the back foot for much of the game.

In the end the French whooped the pesky English - we'll refight this again - the French are much more formidable than the earlier hundred years list where they tend to get shot to bit bits by longbows.


The proper camera is now fixed !

Its not often in life when somebody decides to name something after you but last night was a very proud moment...my nom de guerre 'Eric the Shed' has been immortalised on somebody elses wargaming table !

A big thank you to Mason (Paul)

A full write up of his Western Project can be read here... 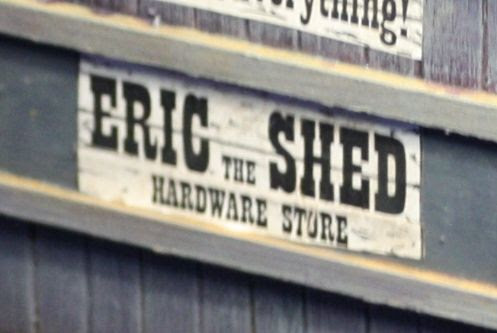 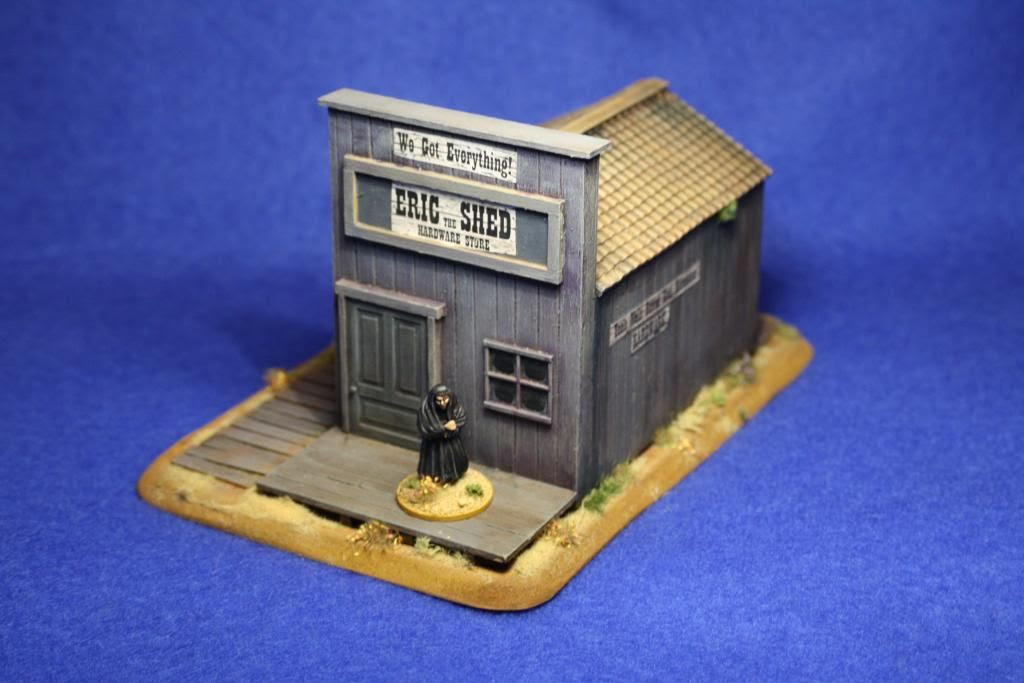 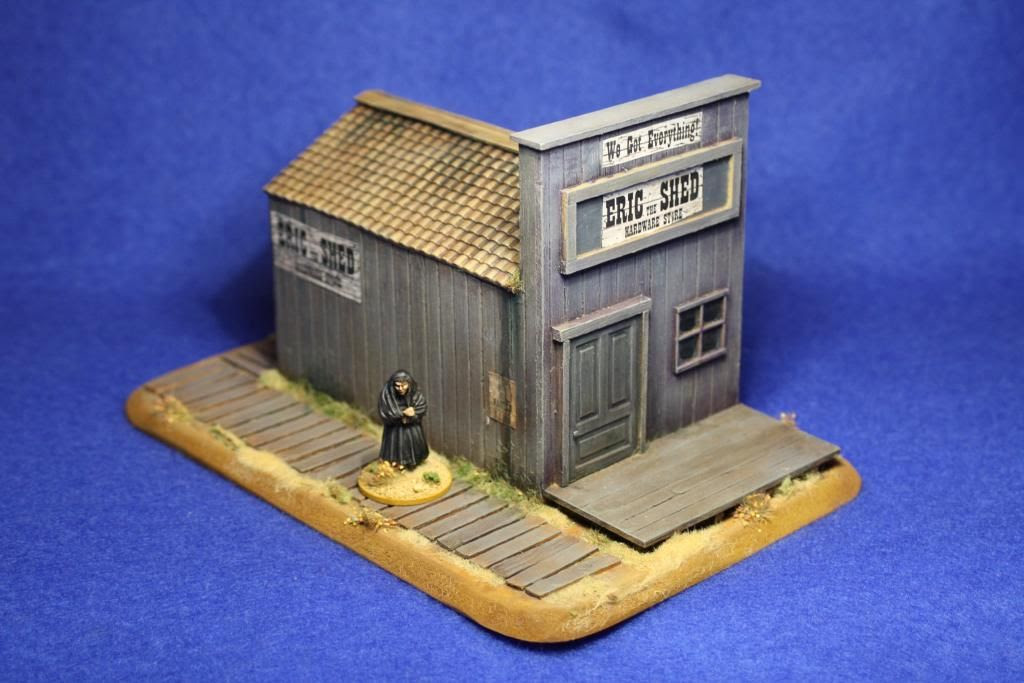 As mentioned in my earlier post last Monday saw the first adventure in the Tales of Shedwood. This was very much a playtest of the rules and if I say so myself they went rather well. A few tweaks are required but we are getting there.

A big thank you to Matt (Robin Hood) and Mark (Guy of Guisbourne) for their support and advice.


I'll start with the scenario and as I work through the simplified AAR I'll drop in snippets from the rules...


The Small chapel of St Oswald lies on the edge of Sherwood Forest, a days ride from Nottingham. It is a famous pilgrimage in this part of the country as it is the resting place of the old martyr known as St Oswald. Oswald was beatified when he single handedly talked the marauding Viking war party to turn back from the evil ways and embrace the spirit of God.


Immortalised in tales and legend his tongue has become a powerful relic and is said to inspire leadership and oratory.


It has long been known that the Sheriff of Nottingham covets this relic and wishes to add this to his collection. He has instructed his henchmen, Sir Guy de Guisbourne and Black Hugo to recover the relic and bring back to Nottingham.


Fortunately for the locals the Sheriffs intentions have not gone unnoticed and a message has been sent to Robin Hood. Said Robin has decided such a theft should not take place and has such determined to thwart the Sheriffs plans.

﻿
As can be seen in the above picturethe forces of the Sheriff of Nottingham lead by Guy are entering the table from the bottom right. They have to enter the monastery and sieze the relic. Once captured they must exit the board from their entry point.

Each player has a number of order tokens equal plus one to the total number of units he is commanding. Guy was commanding seven units so therefore he received 8 tokens.


At the beginning of each turn the player then places these tokens on his Battle Order Board (BOB). BOB is a grid with the Unit forces described across the top and the order types listed down the side.


The unit will perform the listed action as and when the player wishes.

In addition he receives an additional number of tokens equal to his command rating. Once used these are then disposed of and cannot play a further part in the game. These should be a different colour to the standard tokens.


These command tokens can be used as follows:


Order of play. The players roll a dice the highest begins first by actioning one of his orders on the board. Once this has been completed play switches to the next player and then back again. In multiple player games the players on joined sides may agree the order they play.
The turn ends when all tokens are in play. Clearly if one side has more tokens than the other he will play out the rest of his turn once the tokens are spent.
﻿

Guy started to move his troops through the village past the smithy and towards the monastery. The mounted unit leading the way.
Robin Hood meanwhile was leading his men through the Forest to the wood edge where ghe was hoping to ambush Guys forces ﻿﻿
﻿