Yesterday a rather large box arrived from Northstar games...this was the first part of my mega Frostgrave order.

I decided to back the Nickstarter on Northstar games and picked up the early bird starter price of £203......

The Nickstarter ends on the 2nd November so get in quick if you want to bag a bargain.

The remainder of my order is expected in early November

I'll be posting up the paint jobs on these as they develop.

Plus some exciting news on the terrain....which will be revealed at the weekend

The Scales of Anubis - The Balance of Souls part 5

Well we finally managed to play the fifth part of my Pulp Campaign - the Scales of Anubis.... 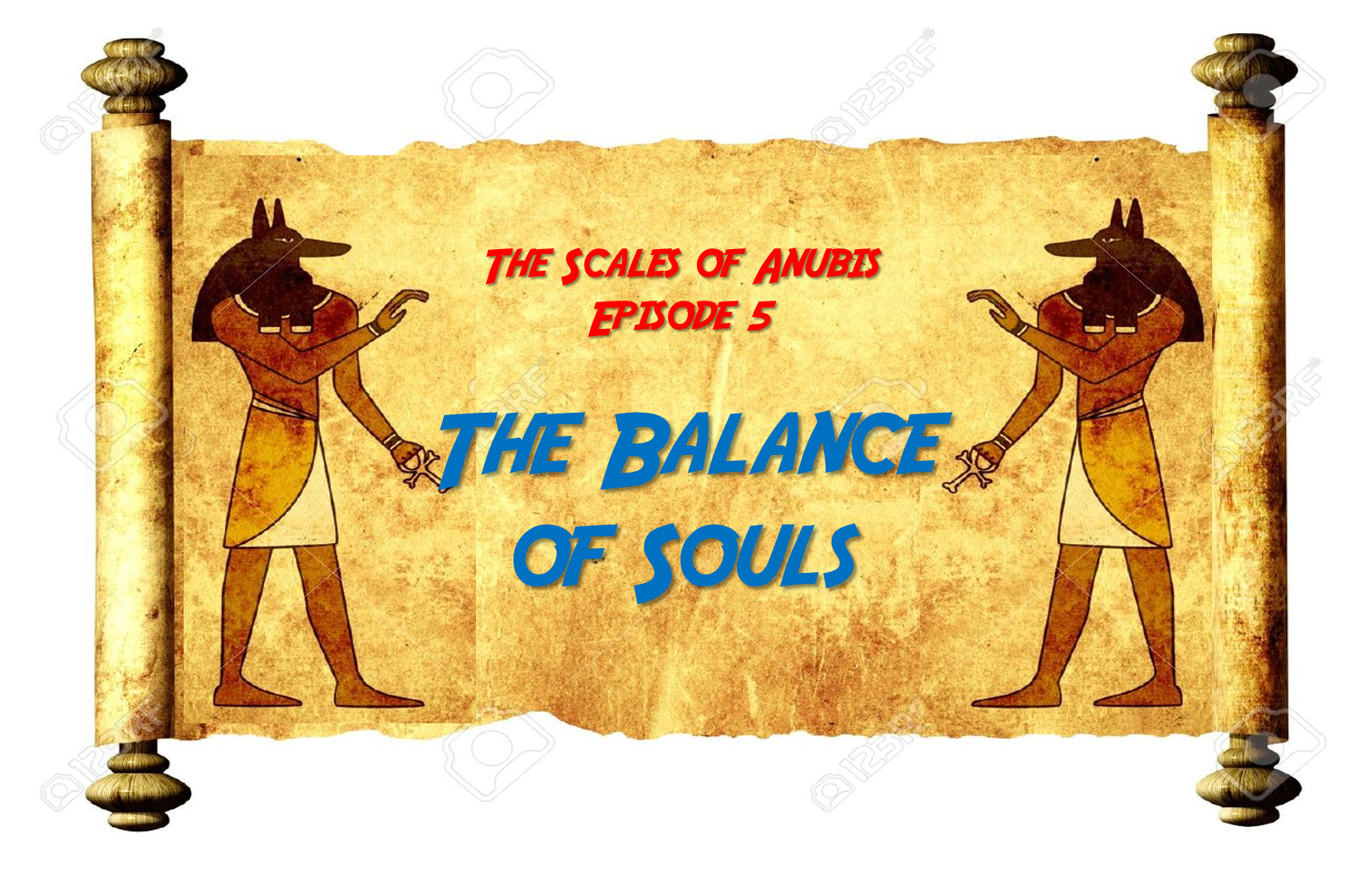 It is probably worth giving a bit of a recap at this point...agencies have travelled across the globe to secure the five missing pieces of the fable artefact known as the Scales of Anubis. Nobody knows (including me) what might happen if these parts can be brought back together and assembled.

What is known is that the Scales were used by Anubis, the Jackal headed god to determine where a mans soul could enter the afterlife...could these scales open the door to the afterlife ? might Anubis return to judge or wreak his havoc on the world? the possibilities are endless and merely constrained by my imagination ;-)

So far we have visited Egypt, Central America, England, Iraq and now we are off to Germany... 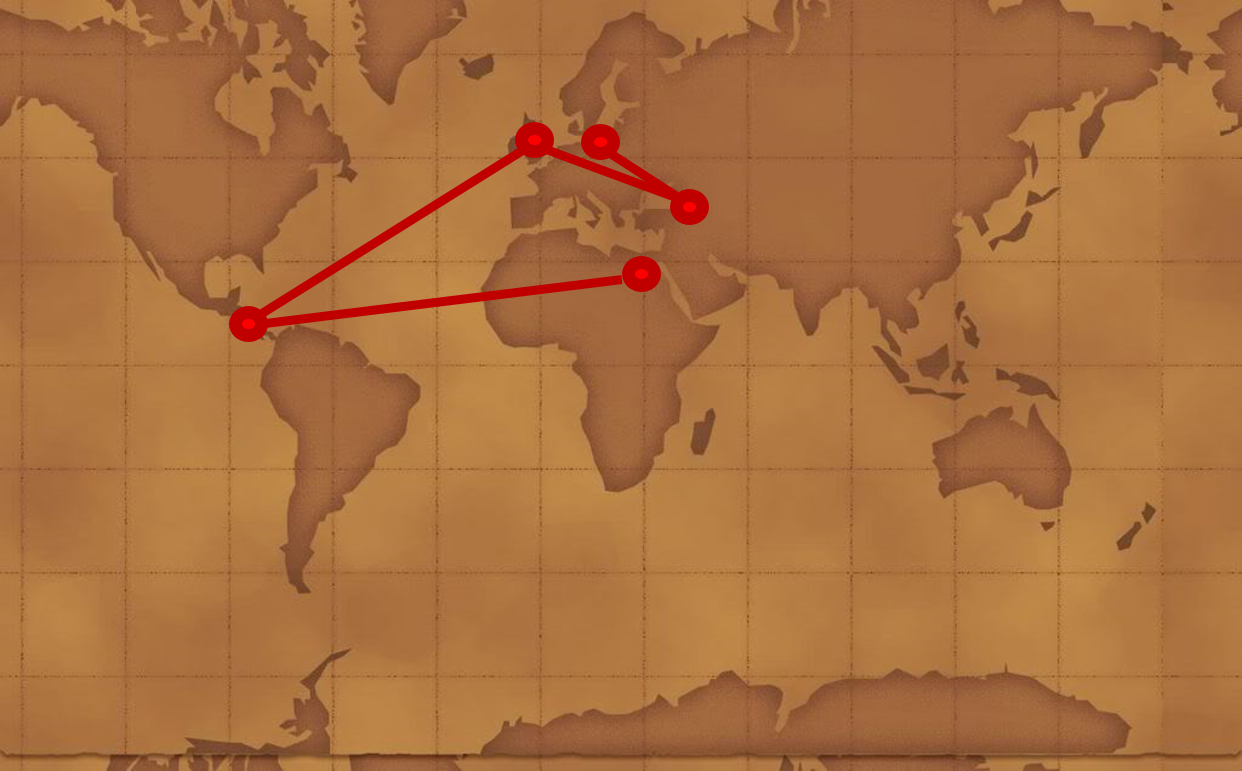 Its the late Summer of 1940, the Nazi's managed to procur what they thought was the final piece of the Scales from a mysterious agent simply known as the Ghost and have brought this item to Wewelsburg - one of the many centres of paranormal investigations set up by Himmler in the 1930's 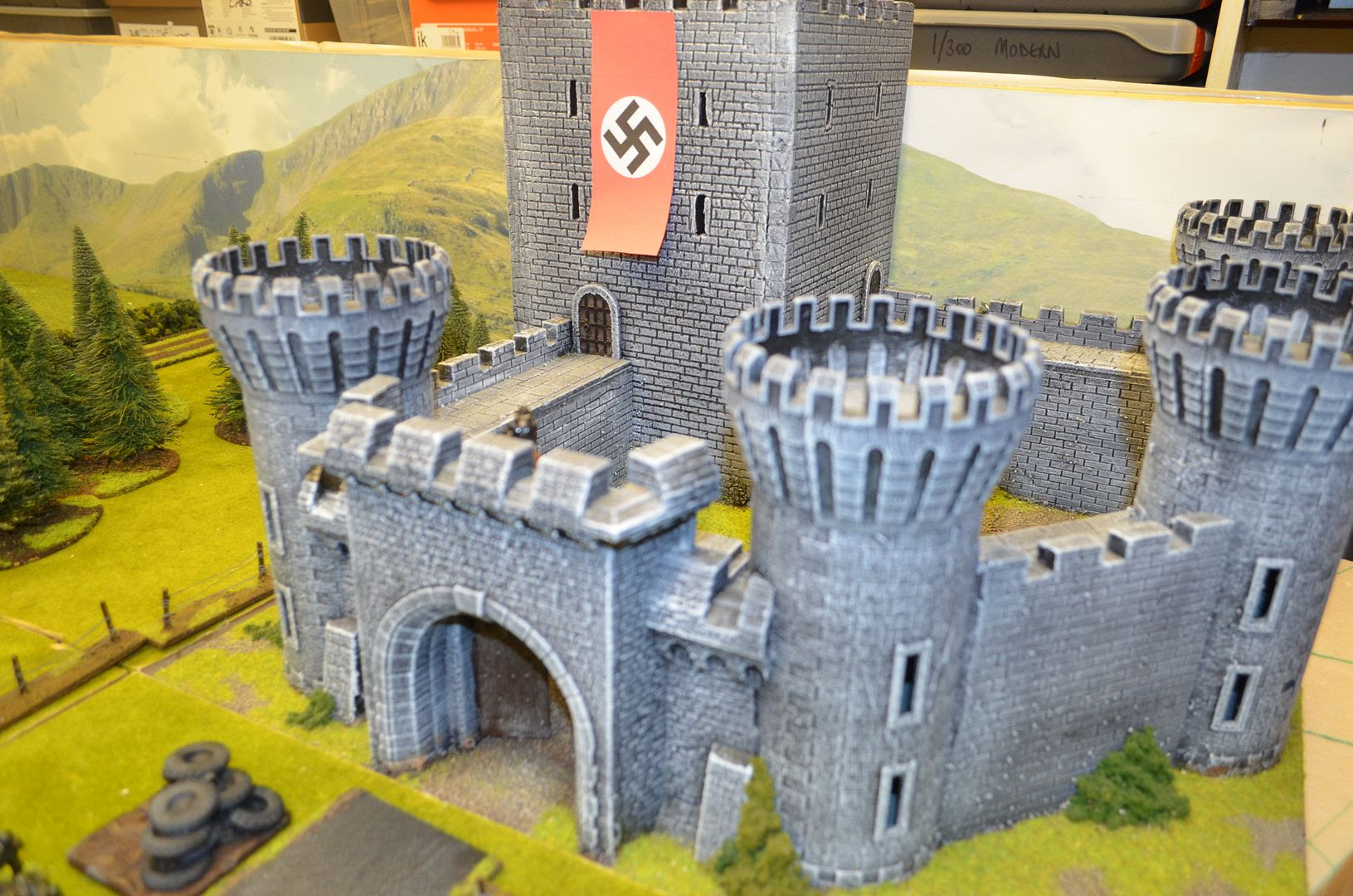 https://en.wikipedia.org/wiki/Wewelsburg
Under the command of Colonel Grunz an number of eminent scientists are evaluating the veracity of this final piece before it is combined with the other four pieces in Nazi possession. The scientists are staying in the picturesque village of Wewelsburg down the valley. 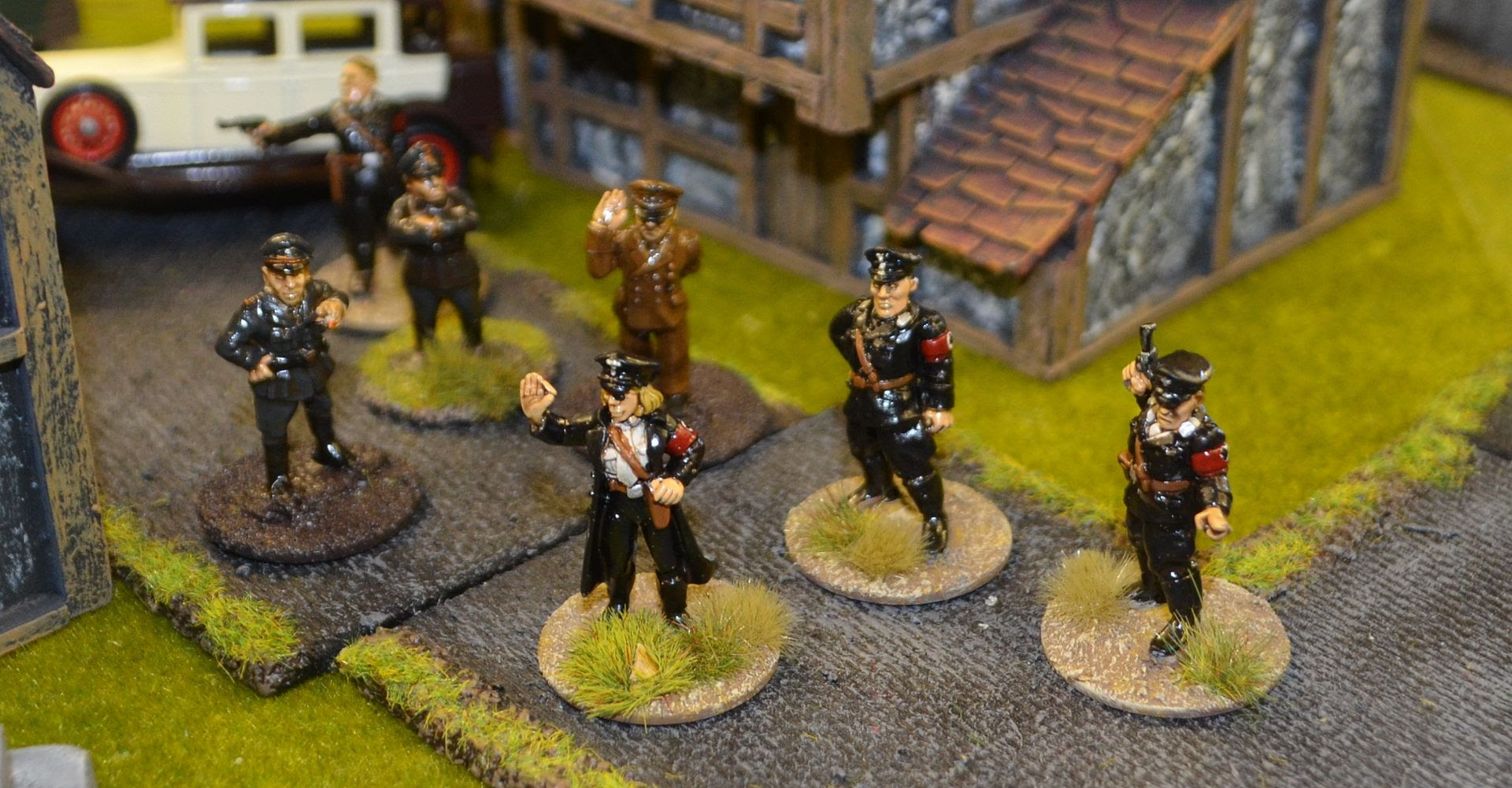 As you can see from the table the village is in the south, Wewelsburg castle is in the North and midway between the two is an airfield. The forces of Good lead by PITH have learned that the final piece is now in Nazi hands and this represents their last chance (maybe) of denying the all the components to the sinister Germans, A crack unit of Commandoes has been parachuted into the area with three key missions.

Sieze the final piece (believed to be in the castle, eliminate as many of the scientists as possible and escape via the German airfield. 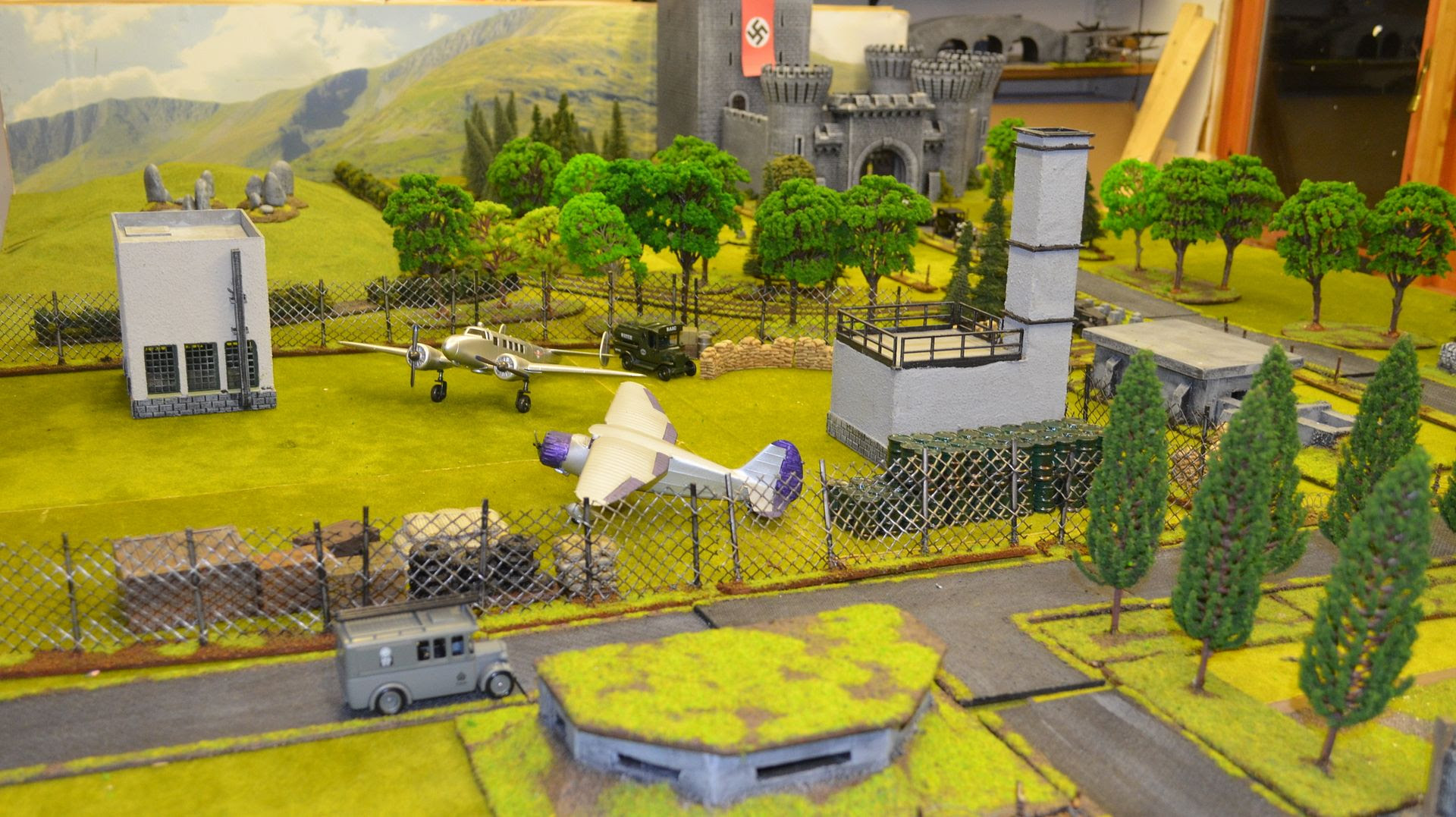 This was going to be a tough ask but these guys were all veterans and up for the job !

I umpired the game and with six players had three on each opposing team. Experience has shown that Pulp Alley does not really work for such big engagements so once again we switched to Bolt Action.

The Pith Forces consisted of

Arrayed against them were 12 units (again six figures strong) of German Infantry and Nazi She Wolves (all classified as Regular) - 4 units in the village, 4 units in the castle and 4 units at the Airfield. All these areas had their own commanders.

Plenty of wheeled transport was laid across the table for the forces to use.

In addition the Germans had a broken down armoured car outside the Airfield. This was just a pile of junk but it gave the British some fearful thoughts and as the game progressed they got more and more nervous when it did not move. 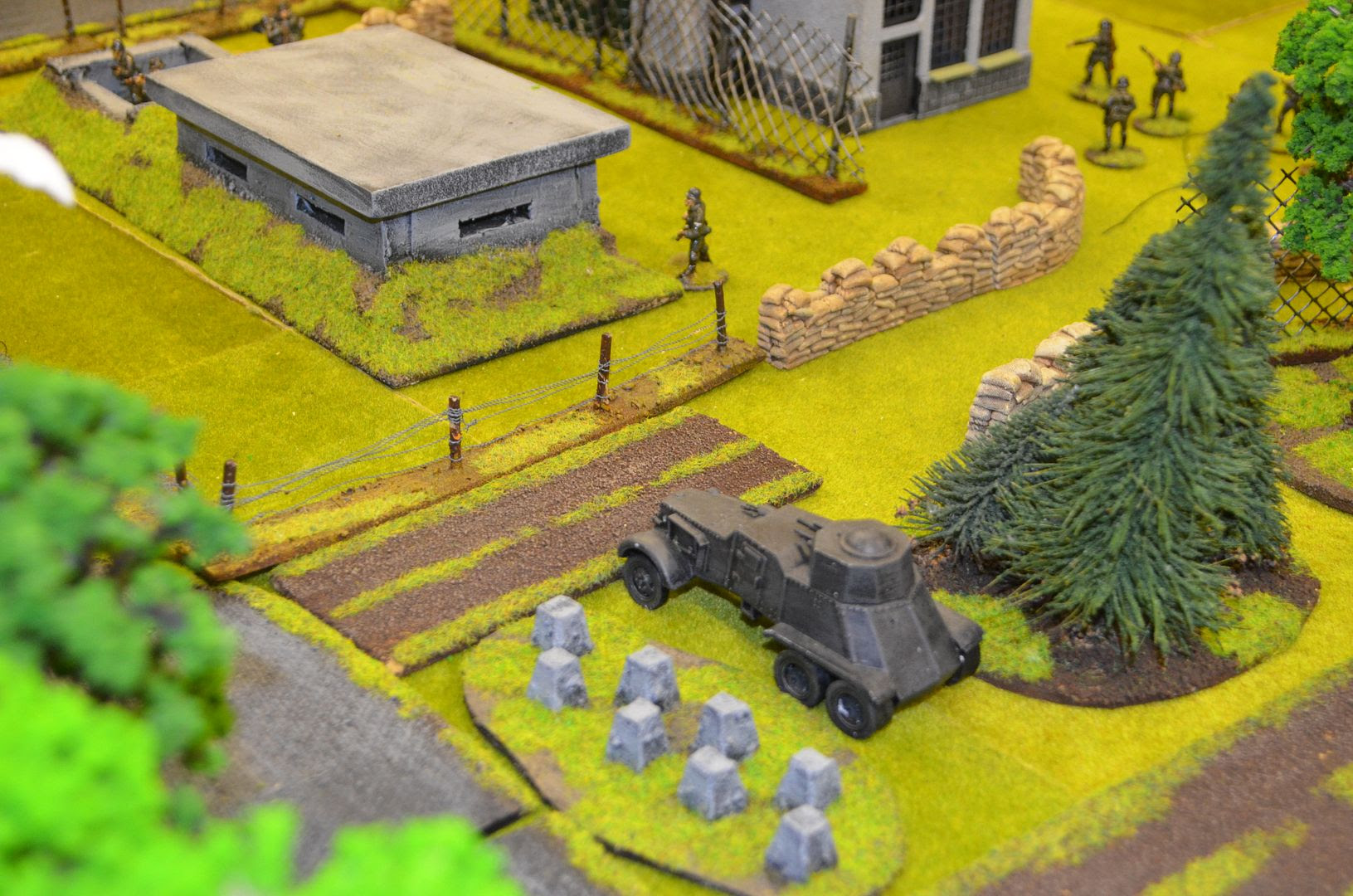 All the scientists (Nazi Officers) were in the village. On turn four I informed the Germans that the Balance of Souls (the fifth part of the scales) was in fact NOT in the castle but actually in the village. One of the scientists decided that he wanted to carry on his investigations in the tavern and had taken it from the castle. This was not known by the British who were doing their best not to get killed.

If I had to summarise the game from an umpires perspective I was somewhat surprised by the actions of the British.

They only made a lack lustre attack on the village, they got bogged down trying to seize the airfield and they singularly failed to attack the castle. In hindsight I probably made the scenario too tough but with some thought and lucky dice rolls they might have been more successful. Hope they don't think I am being unfair in my appraisal...

A few pictures from the game... 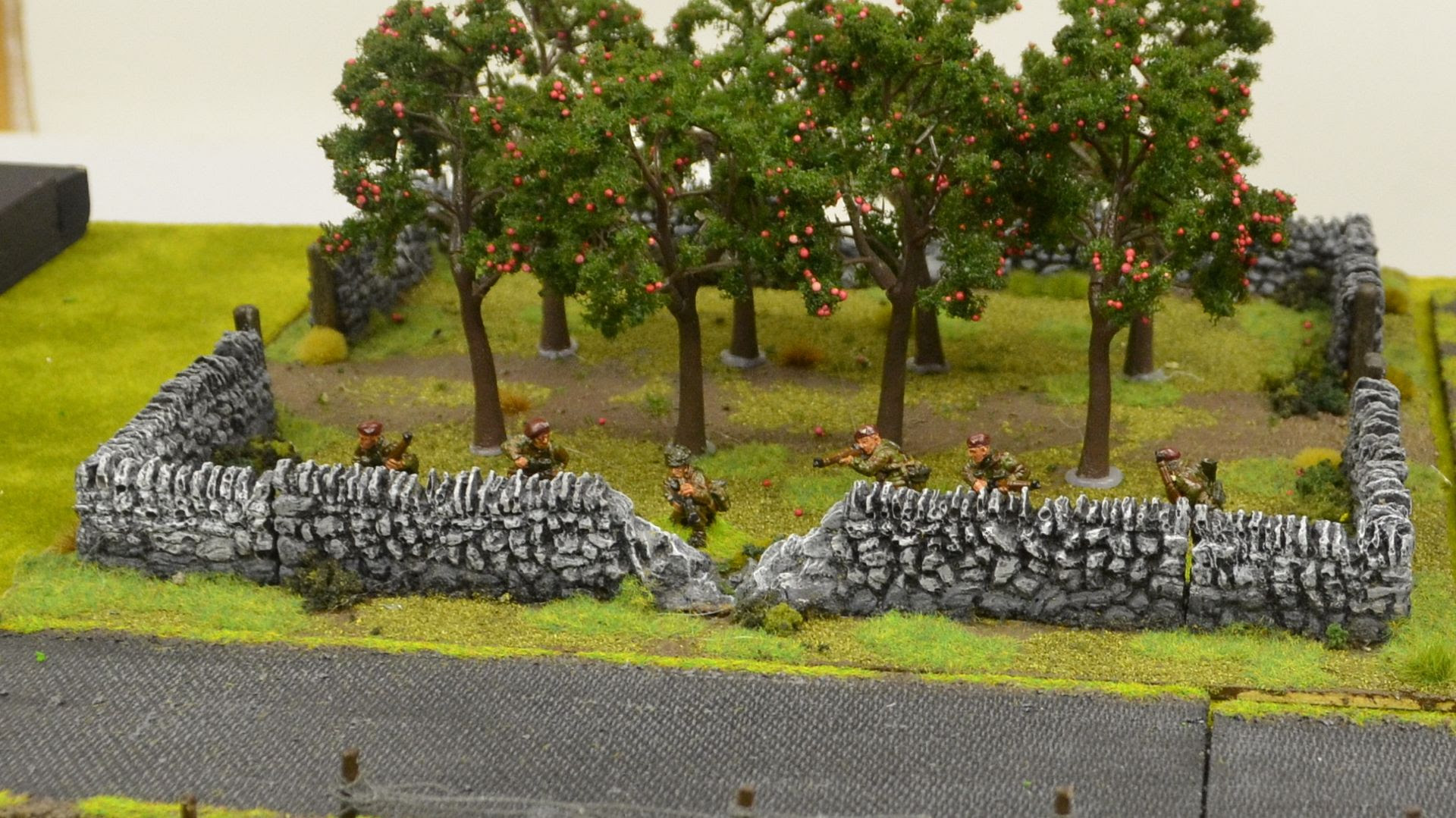 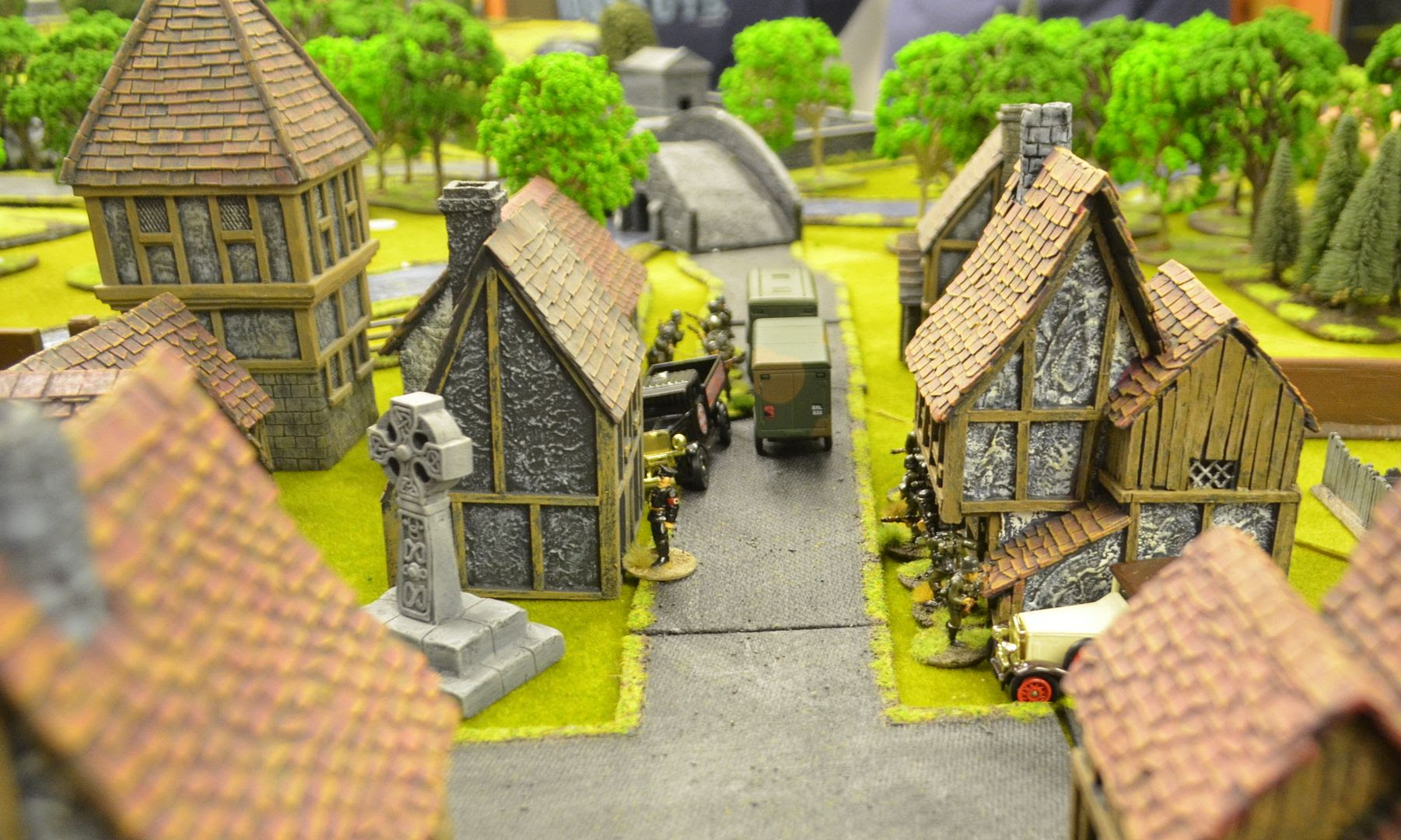 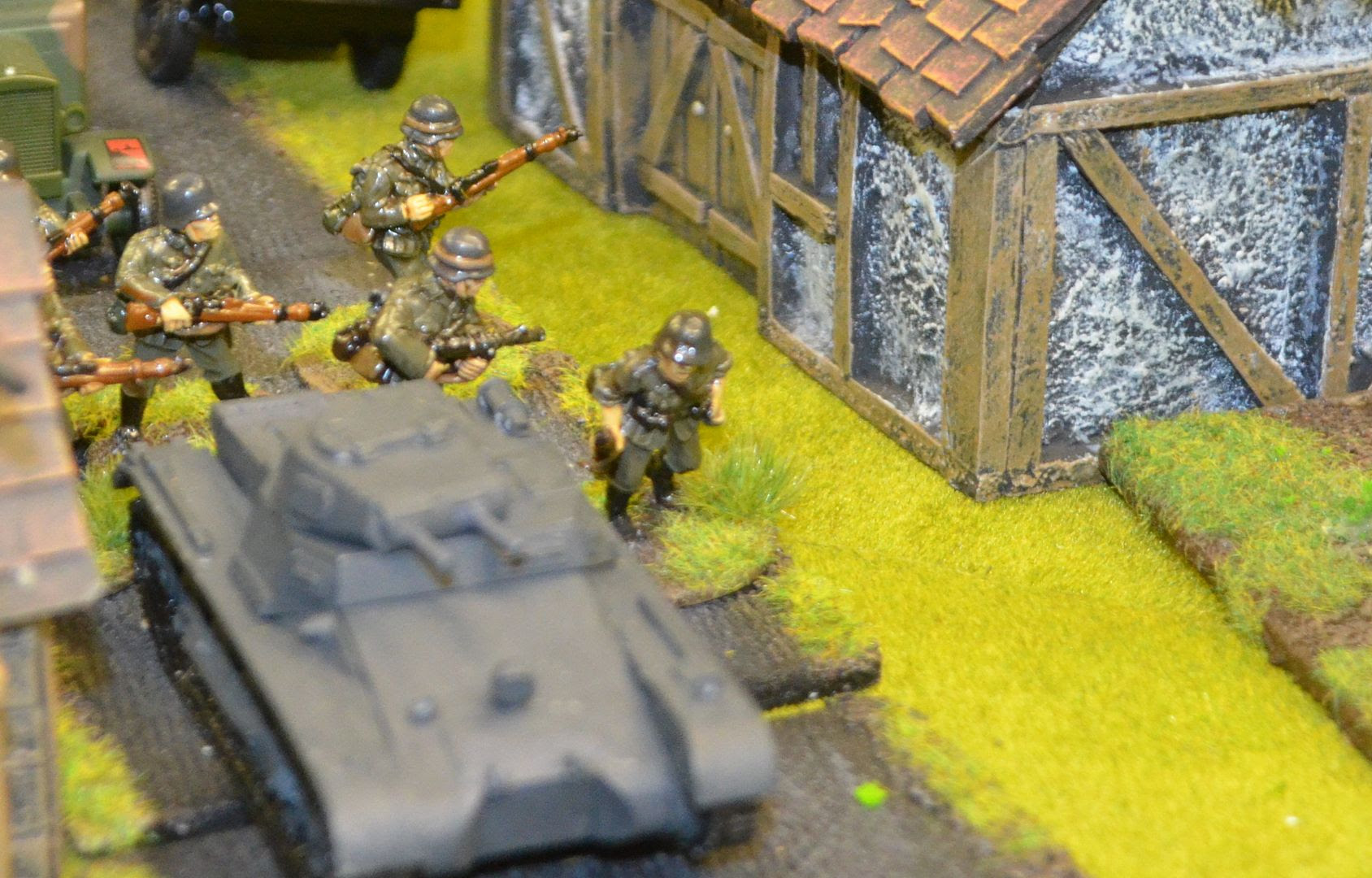 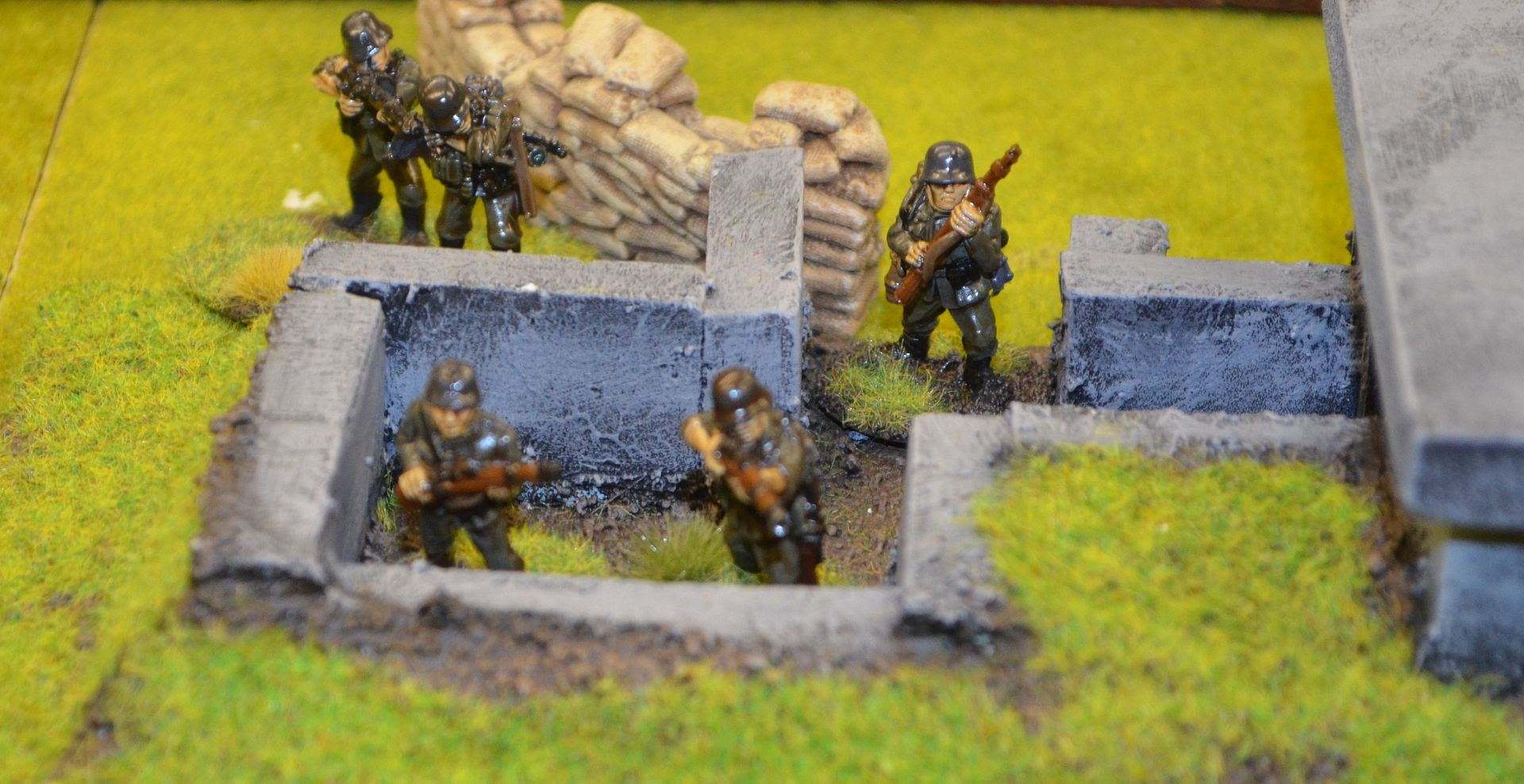 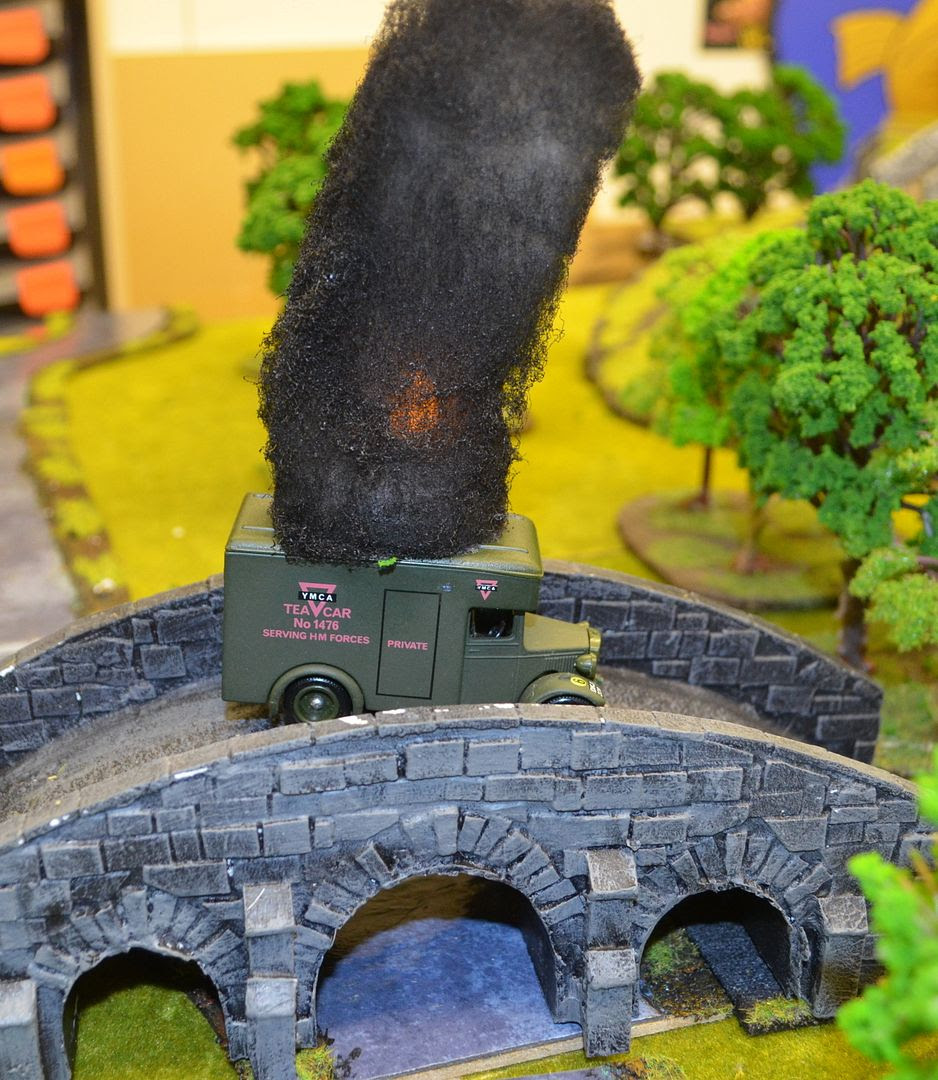 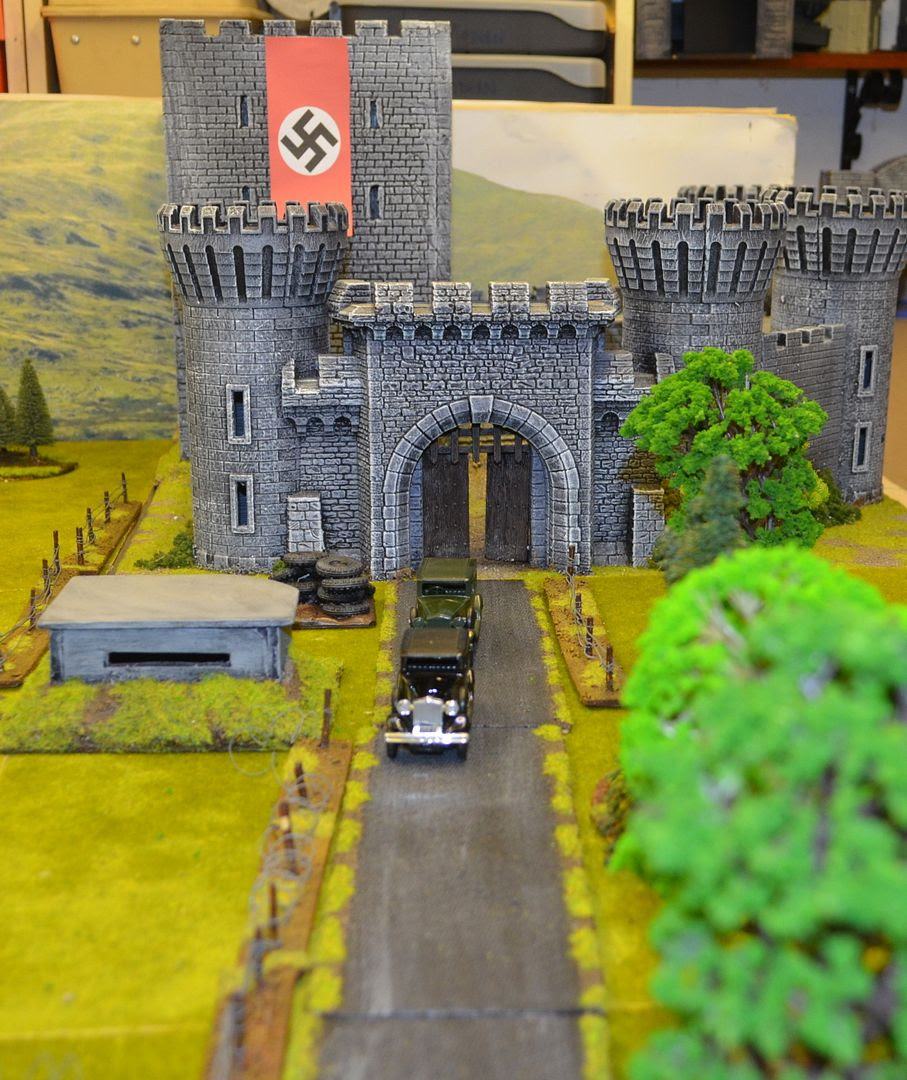 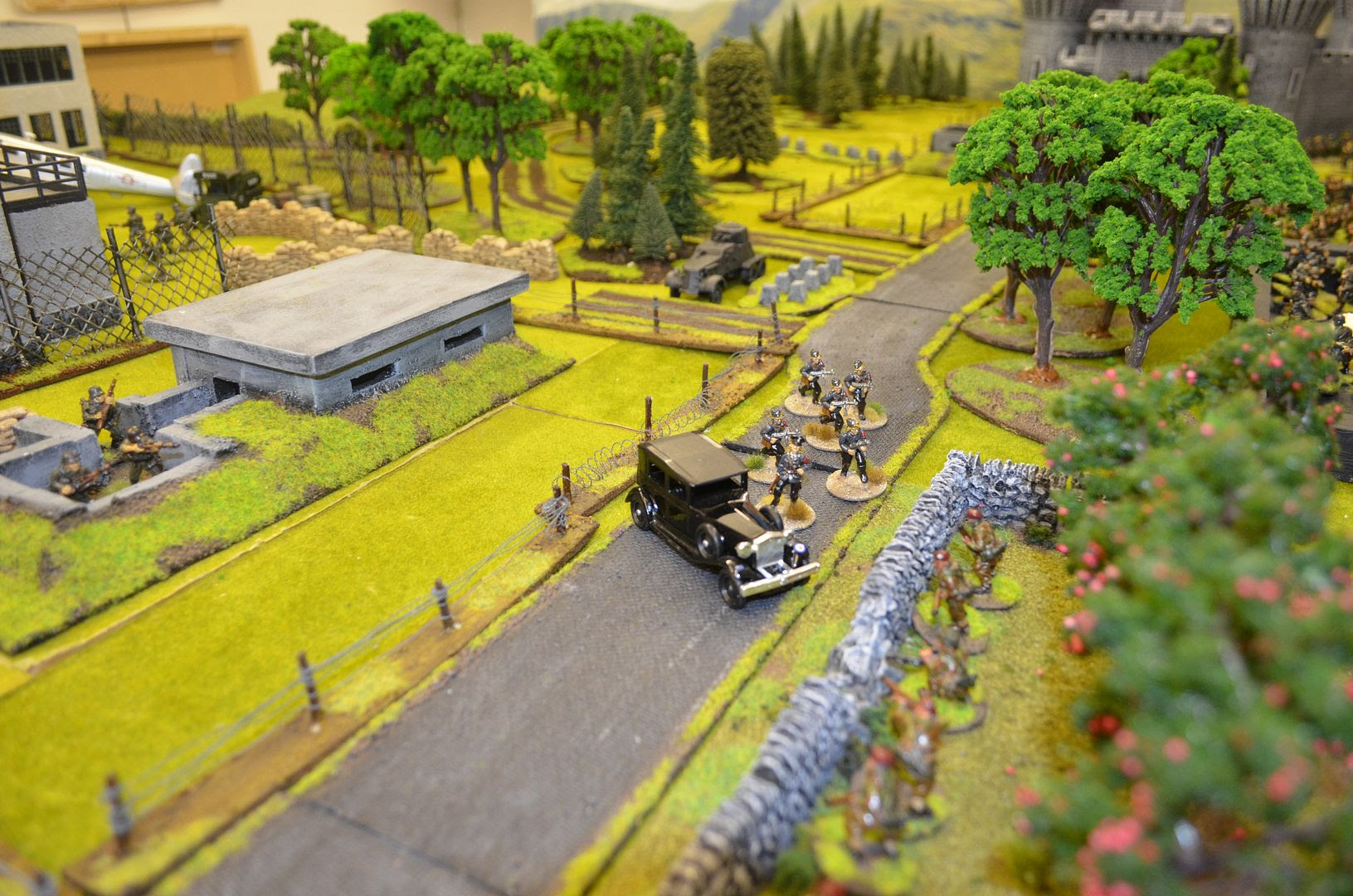 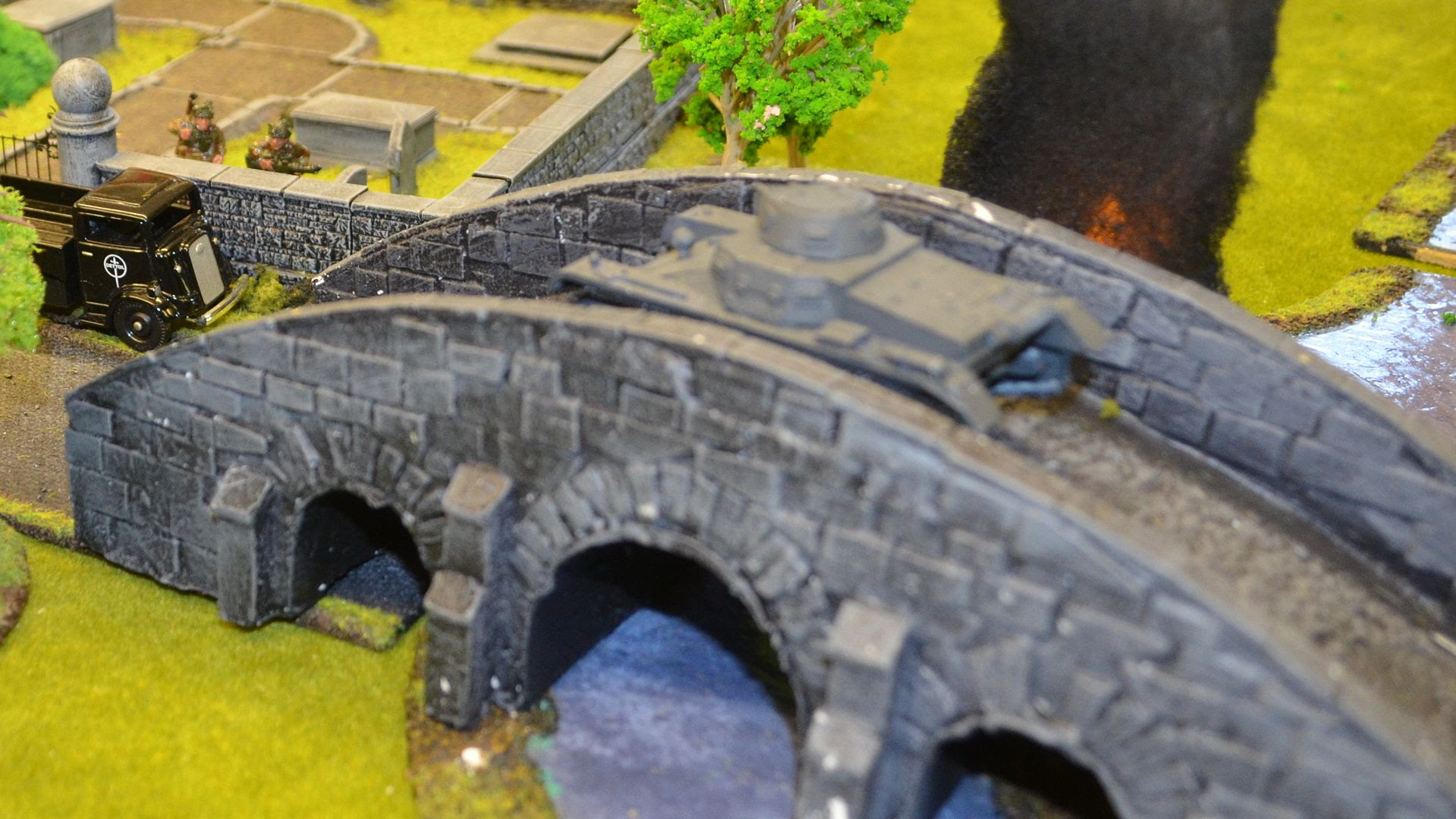 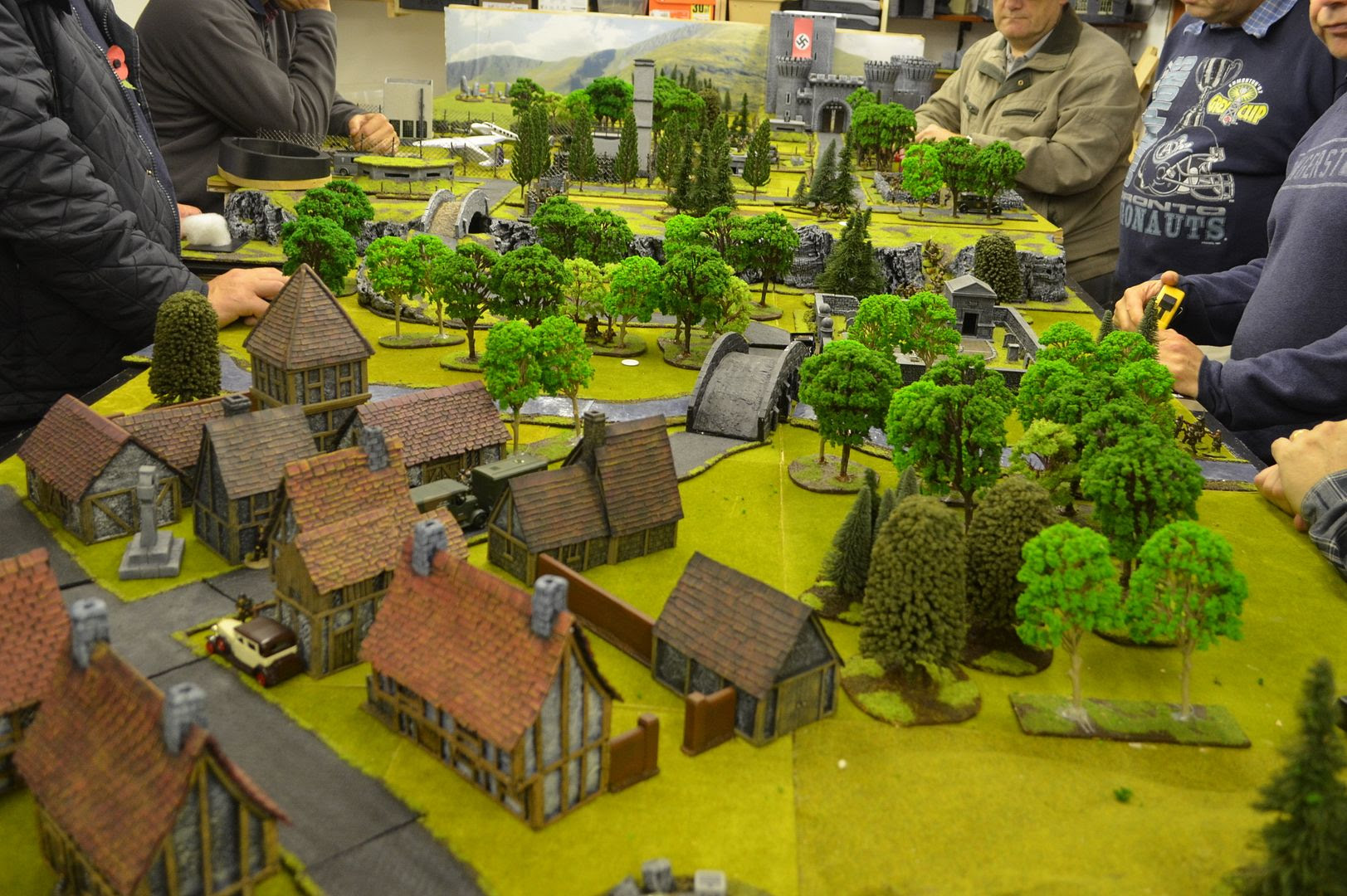 So the Nazi's now have the fabled artefact...the world is on the brink of war...what happens next.

The final thrilling part of this campaign is coming soon in... If you have been following the blog you will know that over the past 12 months I have been building and painting two large armies for some big battles of the Third Crusade. Last night I scrapped the idea I was working on for my Pulp Campaign finale (that's now next week) and chucked down an open desert board and all the figures I have painted for this genre. All told there were close to 600 x 28mm minis on the table including 150+ cavalry figures. It looked awesome.

I was so engrossed in the game I took few pictures but hopefully the few that are here will provide the sense of splendour.

We used the Lion Rampant rules for this game with each side fielding 92 points aside.

To begin with I thought we might be biting off more than we could chew but I had no worries, the game was done and dusted in two and a half hours. It was brutal.

The winner would be the first team to break the opposition by destroying more than half their units on the table. In the end both sides came very close with the Saracens scoring a marginal victory. From my perspective Lion Rampant worked brilliantly for this large fast paced game...with no terrain to hide behind it really was a straightforward pitched battle. Once again we dropped the rule that a failed activation prevented other troops from performing actions.

Probably like history the Crusaders were outgunned in the archery stakes but more than made up for it in the heavy armour - bow it takes a lot of arrows to bring down armoured knights.

Morale failures were key in this game with many of the crusader units fleeing after a few hits  poor dice rolls.

In the coming weeks we are going to replay this battle using Hail Caesar to see how the two sets compare. 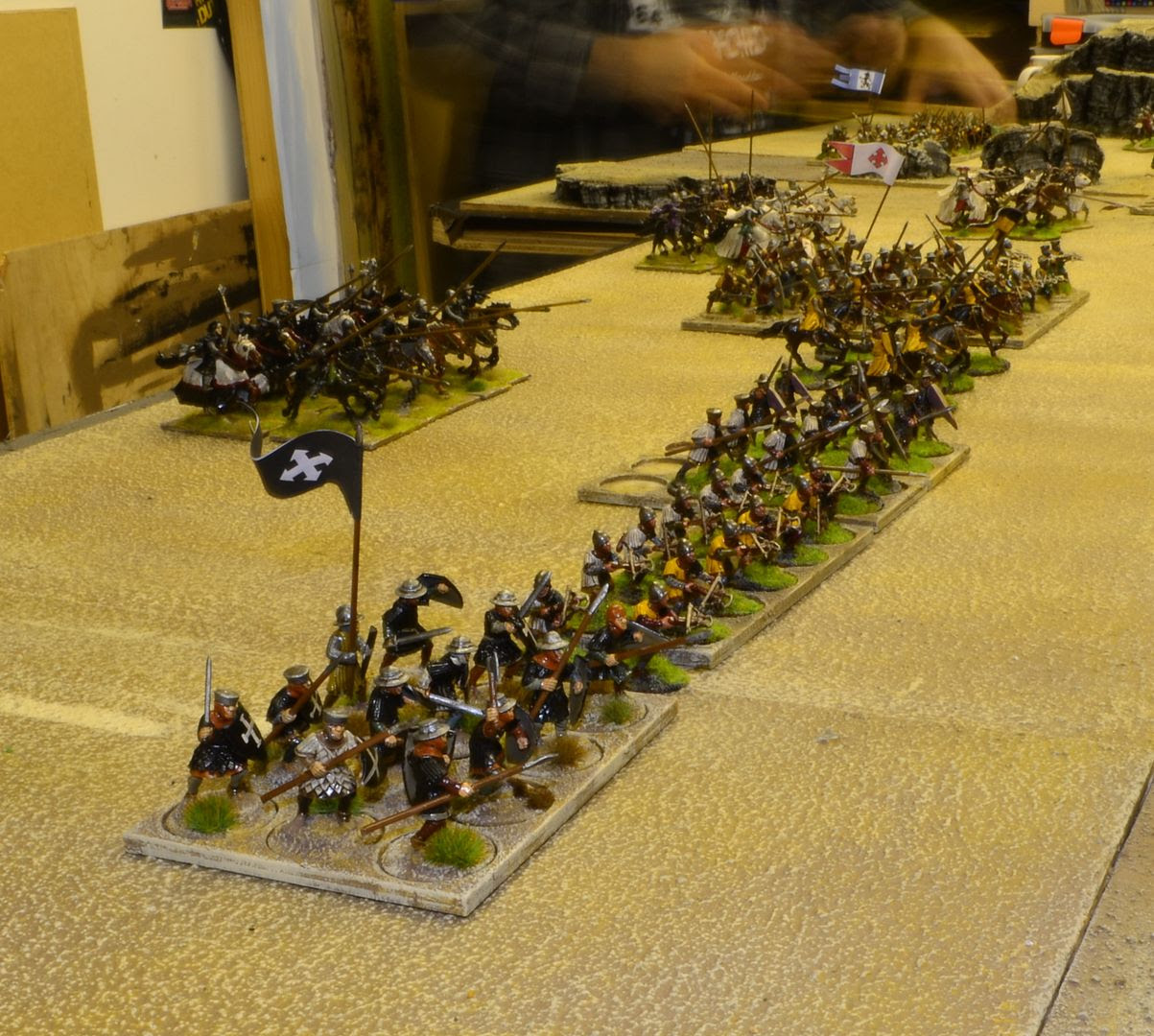 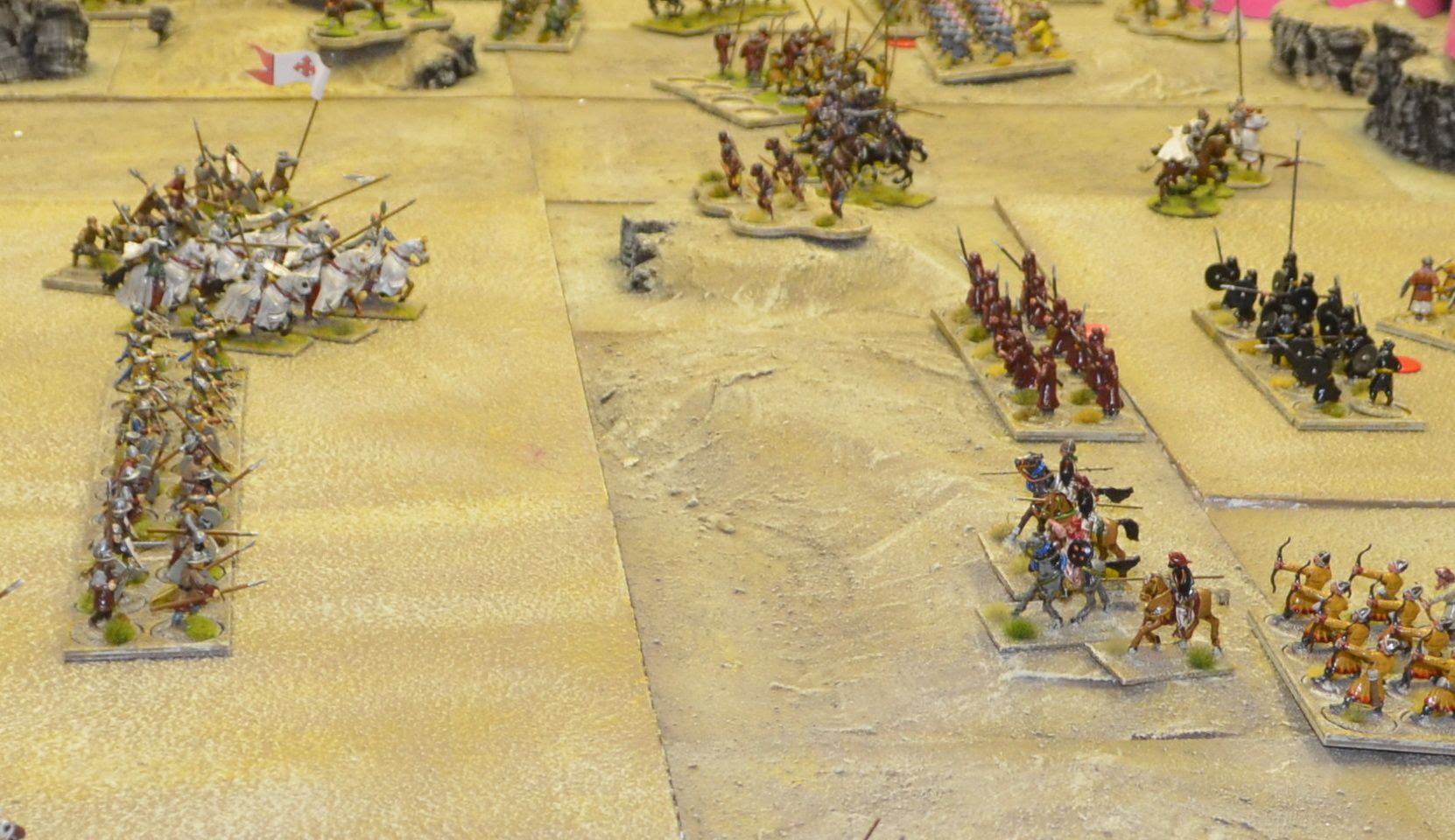 As announced a few weeks ago the Shed is going to embrace Frostgrave in 2016 which does mean a whole new terrain project...hooray.

I have tried snowy landscapes before a failed quite miserably so this to all intents and purposes is going to be a fresh start.

I have read so many articles out there on building this type of landscape  I think I am going snowblind. One of the best I have seen is a thread put together by a gamer called Harry

All credit to him for this build and alerting me to the possibilities of the Gormiti Building...read on.


The starting point on any journey is to do some tests. As part of my Amera order I purchased a small flat terrace - its about 6 inches square and perfect for my first test.

This was initially primed in grey paint then painted black. The ground surrounding the plinth had sand added to create texture. I also started to build up some sand/snow areas inside the walls.

The building was then drybrushed with greys to bring out the details. 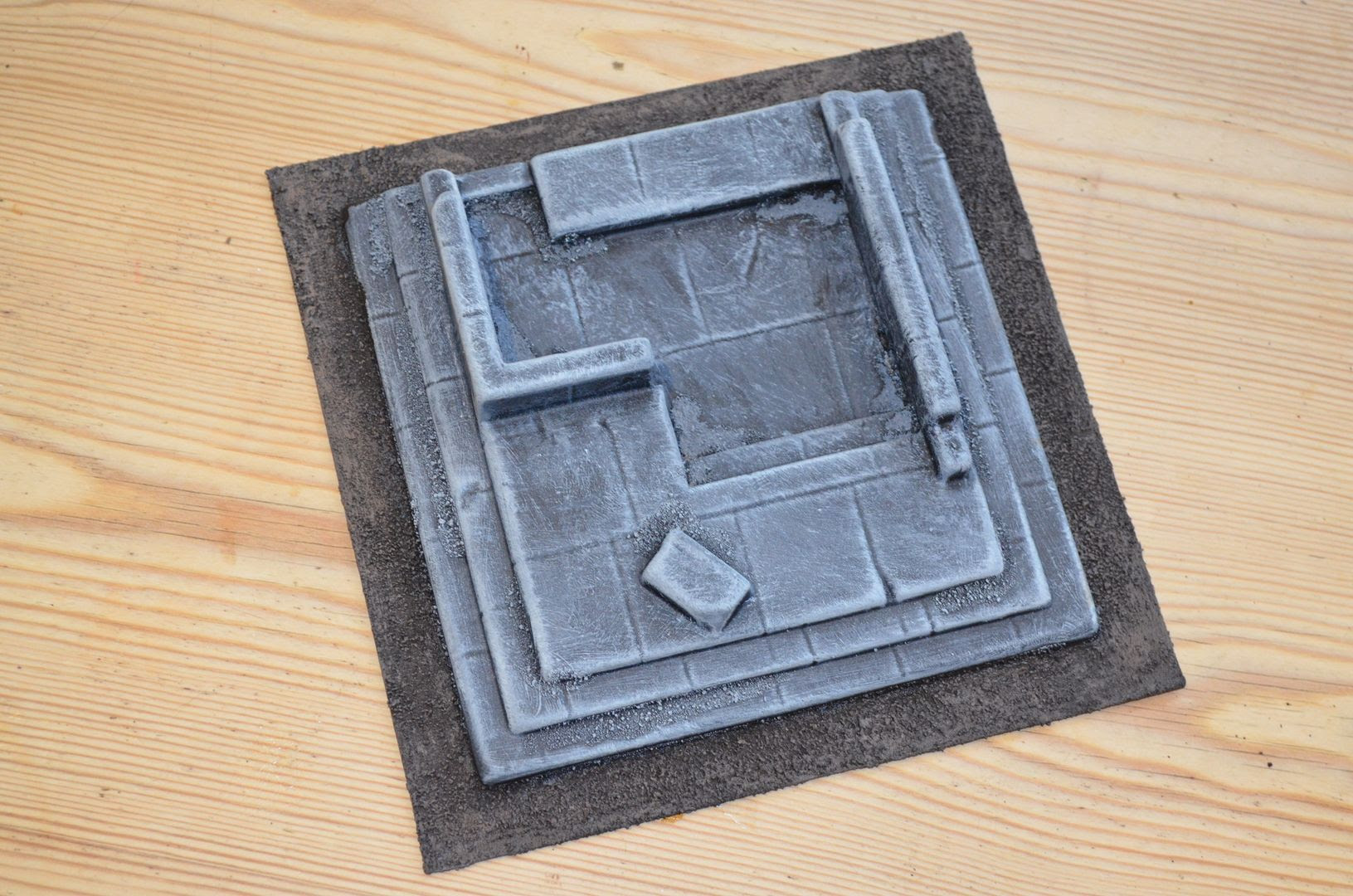 Once dry I added my snow gloop...this consisted of white acrylic paint, pva glue and white powder filler. This was mixed up in a paper cup. The ratios were about a third of each.

This gloopy stuff was painted onto the ruins in two successive coats. This took an eternity to dry, but I was still not happy with the final result. I then recalled I had a box of this hidden in the shed and wondered if this might deliver a better effect? 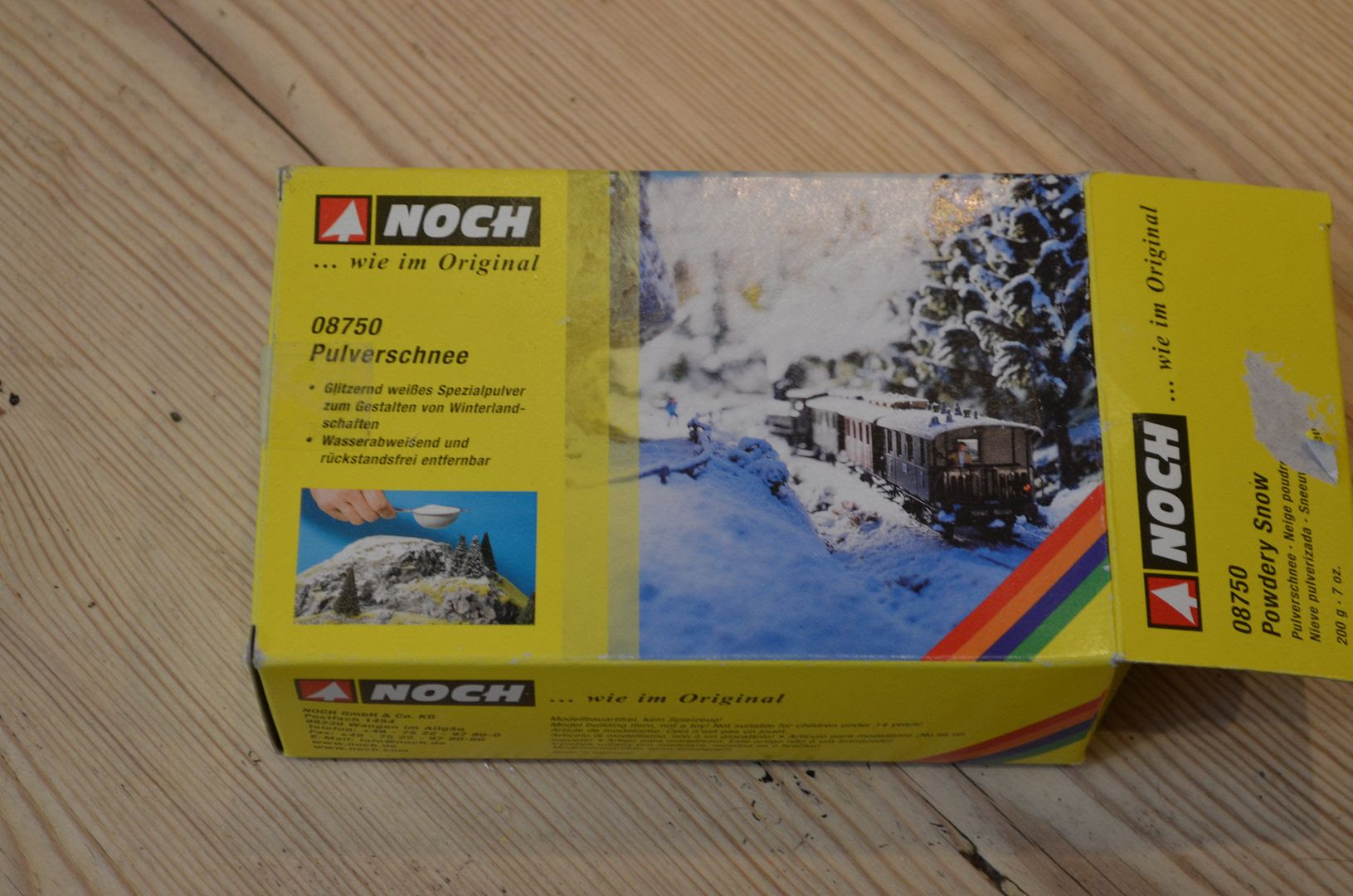 I painted over the white patches with PVA and sprinkled on this white powder. It was perfect. 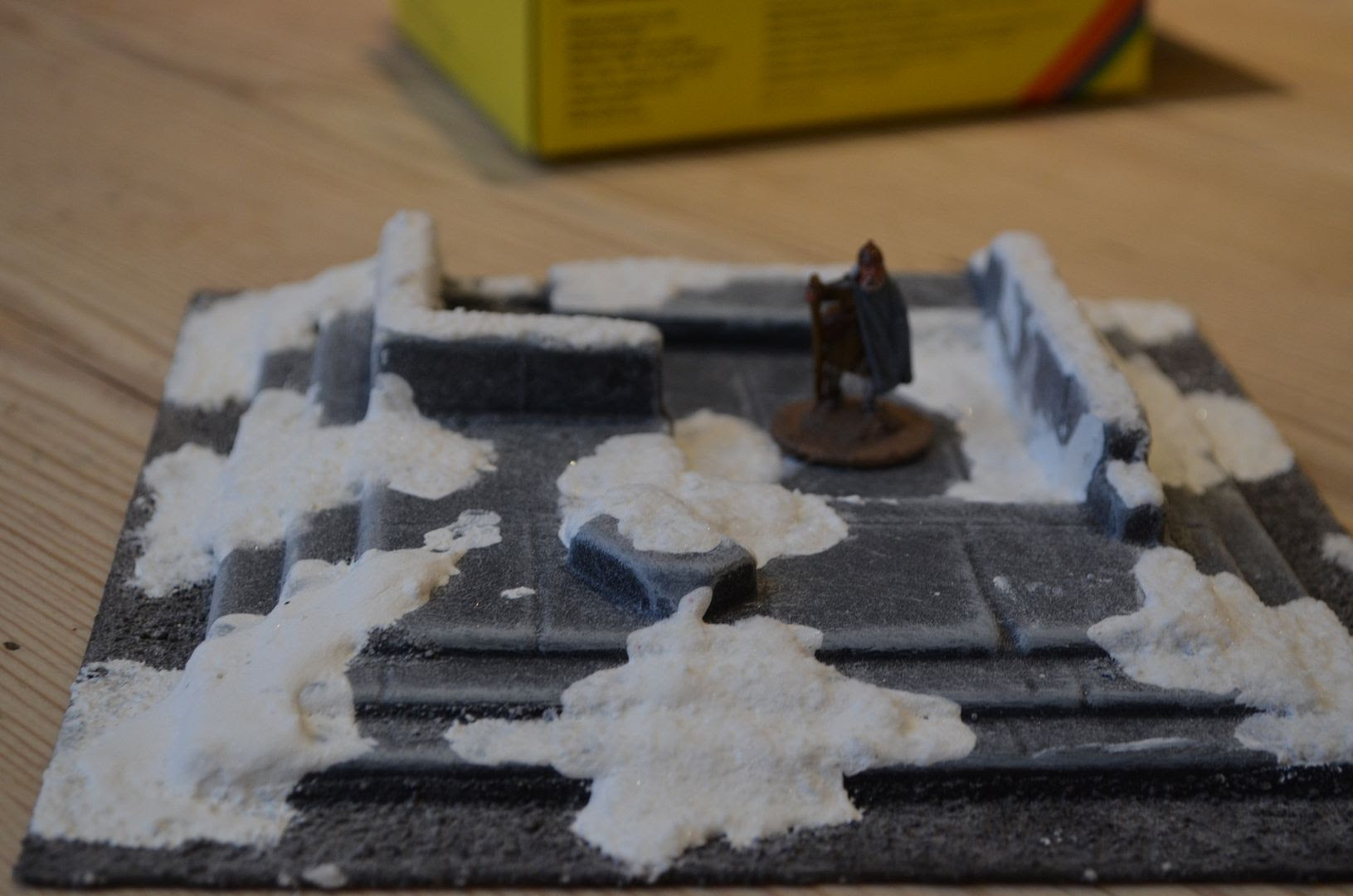 So the first piece of Frostgrave terrain is done...

Onto the next piece - this focuses on the rather wonderful Gormiti Plastic Toy called the Earth Temple - it comes in some various shades of garish brown and orange. I picked up mine for a tenner on ebay. Subsequently I bought two more ! - One will be sold once finished for hopefuilly a tidy profit.

These buildings are perfect for 28mm Fantasy games.

Up to now I have just painted mine black and drybrushed with greys (fifty Sheds of Grey anyone?) - they will get the snow treatment soon 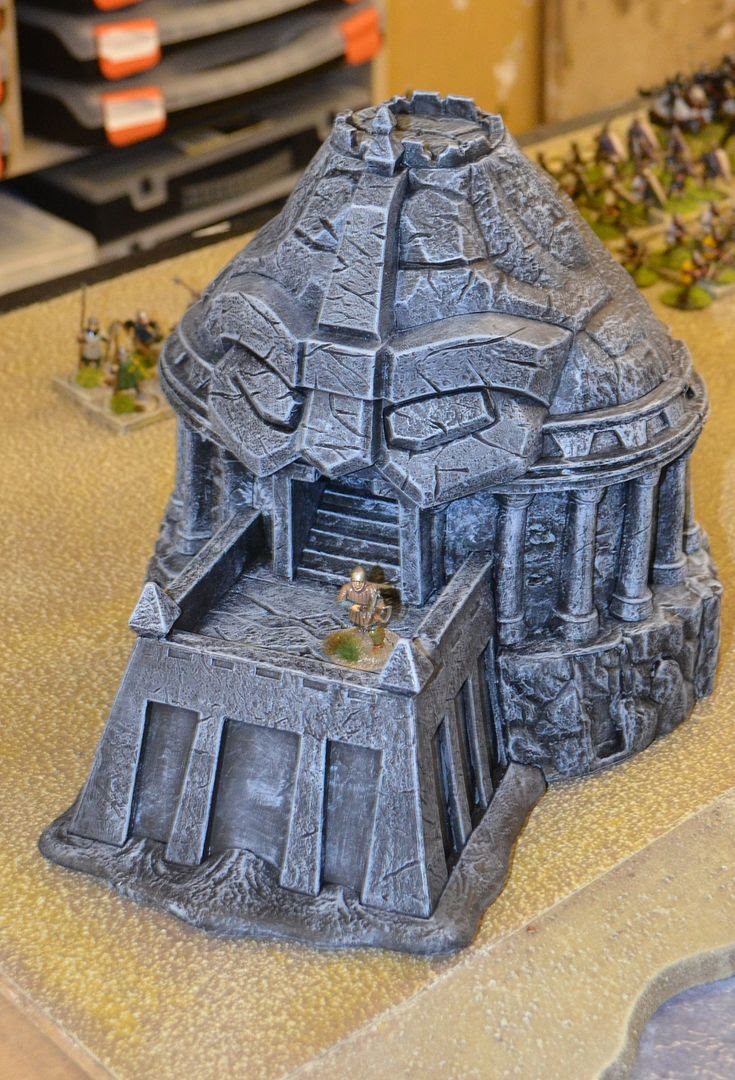 Having two of these will be used to create a rather imposing scene....

part 2 of this project can be found here

On the 26th July I posted that I had just started assembling my Crusader Army - this was going to be augmented with the forces I had assembled for my Robin Hood games. Robins archers will get pressed into service as skirmishers.

With Fireforge figures being the bulk of the forces the majoriy of what you are going to see next is in plastic.

I had already painted up the 96 odd infantry see earlier post - so my attention was drawn to the 36 horse.

Spurred on by a need to get these done a few nights (pardon the pun) later my Cavalry units are now finished.


Once I get the chance I'll photograph the army as a whole..