Last night I had the pleasure of hosting our final game of our Wars of the Roses re-enactments - the battle of Stoke Field. Suffice to say it was another cracking game, a real nail biter and a massive credit to Andy Callan for the excellent Never Mind the Bill Hooks of rules.

The original five players who started this journey through the dynastic struggles of 15th century England were all present. The Yorkist pretenders represented by myself, John and Mark K, whilst the Tudor/Lancastrians were lead by Alastair and Mark F. I'd like to take the opportunity here for thanking them and all the others who have dipped in over the last couple of years for their support, bon hommie and good natured gaming for this project. With quite possibly only a few games left in the Shed these Monday evenings have meant a great deal to me and will be missed.

Yesterday I set out the basic rules for the game and these can be found HERE. This includes the full orders of battle, when the Lancastrian forces arrive and how the games mechanics work.

Before I kick off with the full report I must apologise for the quality of the photos. For some strange reason many look very yellow or washed out. I haven't played with the settings on my phone so it is all rather frustrating.

To kick off proceedings the Lancastrians had to check the morale of all the non Knight/Men at Arms units to determine if the 'Lights in the Sky' spooked any of the units and whether they might flee the field. One unit, a detachment of bills under the Earl of Oxford decided that the portents were not good and retired from the scene. It could of been much worse.

The Battle then started in earnest with each side pushing forward units in the maneouver phase. The Yorkists were keen to close as fast as possible and of course the Lancastrians wanted to delay the onslaught until their reinforcements would arrive.

After some simple moves the Lancastrians thrust forward on their left flank with a lone unit of Knights. This was going to crash into the lightly armed Irish Kern (For this game the Kern were double strength - 12 figures instead of six).

The Irish let loose their Javelins downing a couple of the heavy horse but it was to no avail as the armoured warriors charged into their target. Suffice to say the Irish crumbled and were driven back. The remaining Knights followed up... 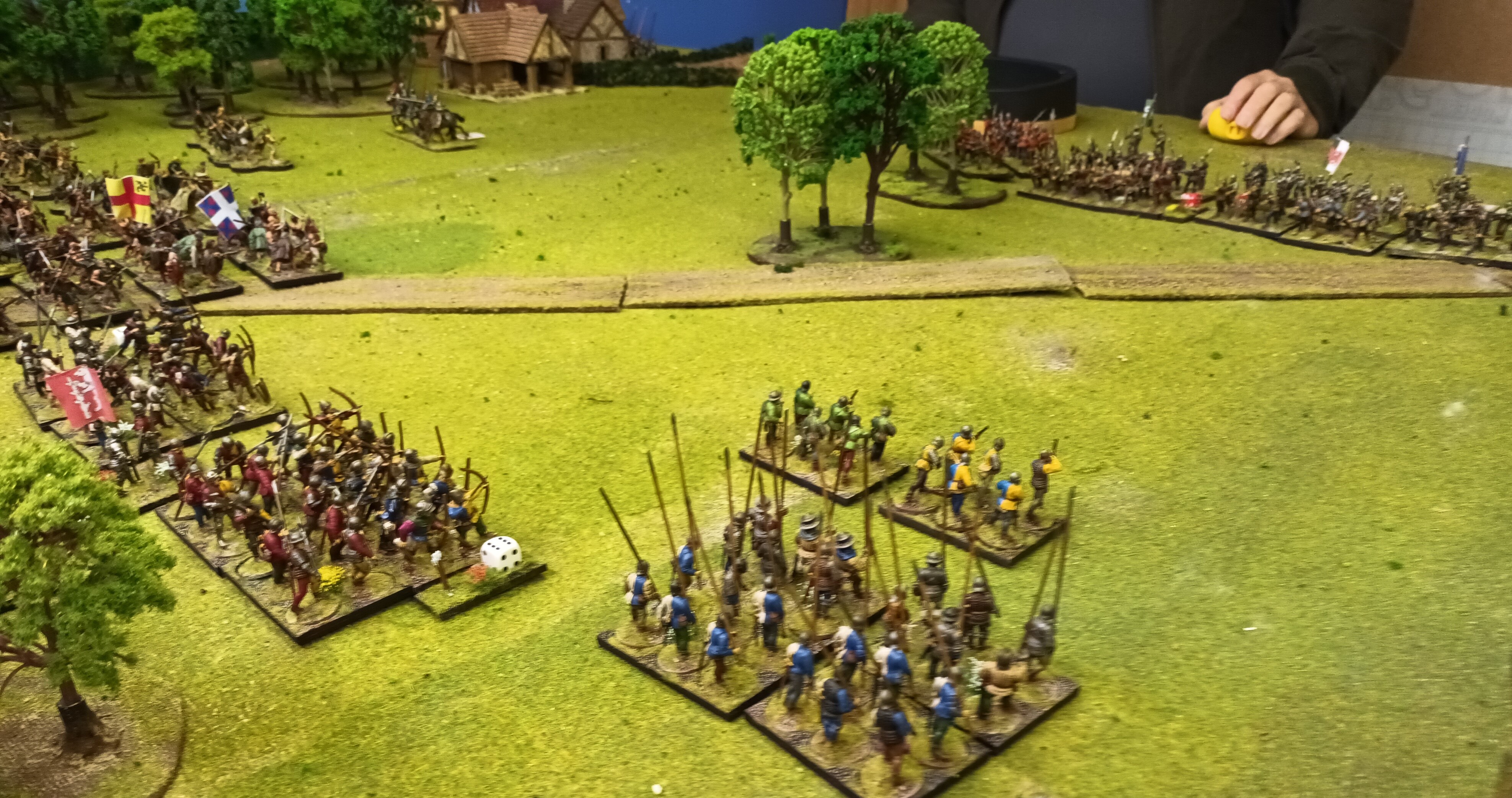 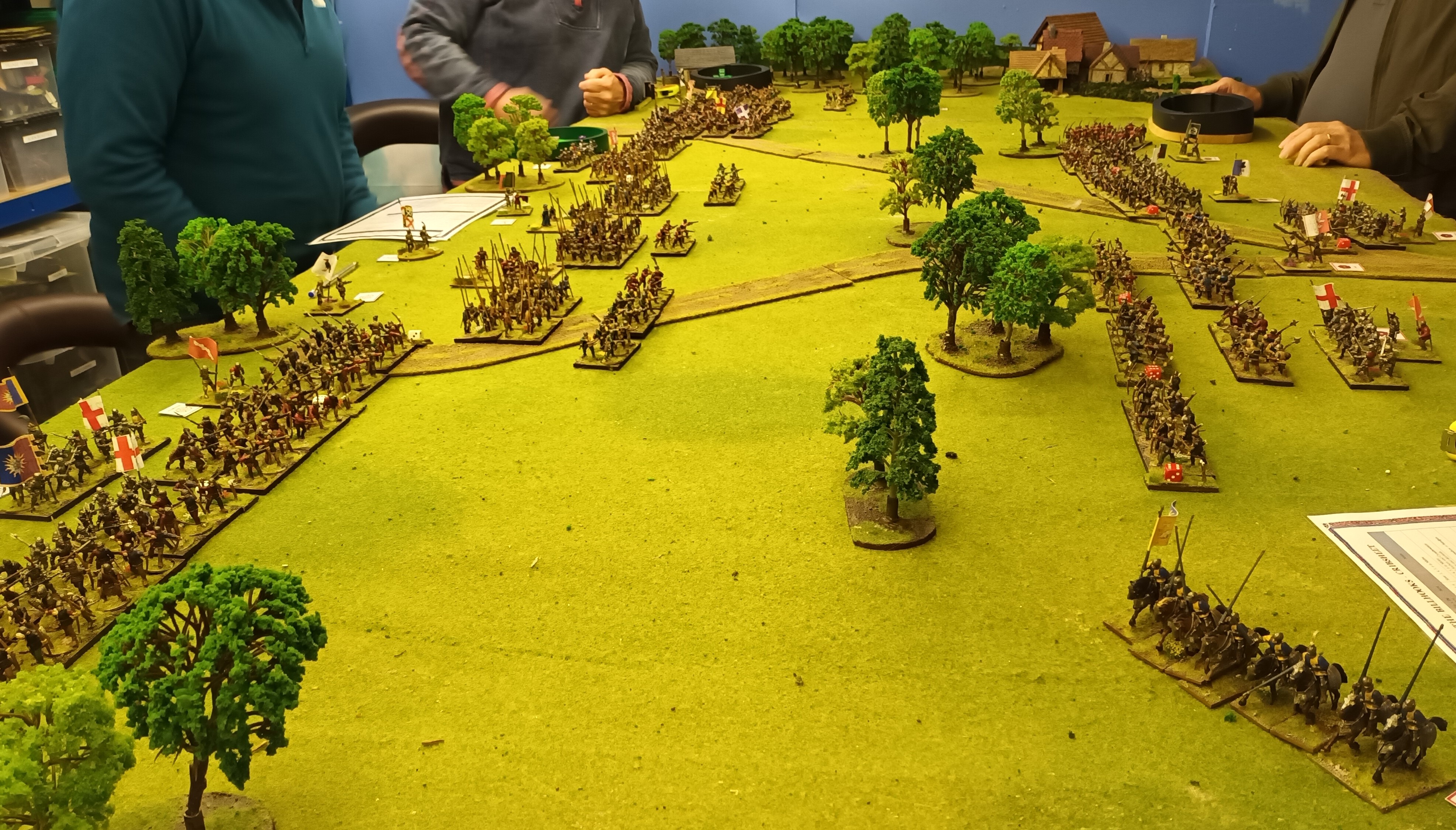 By now the battle between the Knights and the Kerns had hit a crescendo. Not only were the remnants of the first Kern unit wiped out their defeat triggered a morale check across most of their countrymen. A further two units fled the field. In one blow a small unit of Knights had removed 6 Yorkist tokens.
The Knight unit was quickly despatched by a deluge of Javelins in the following turn

As the Handgunners started to rear holes in the Lancastrian defenders their supporting pikes continued
to edge forward. 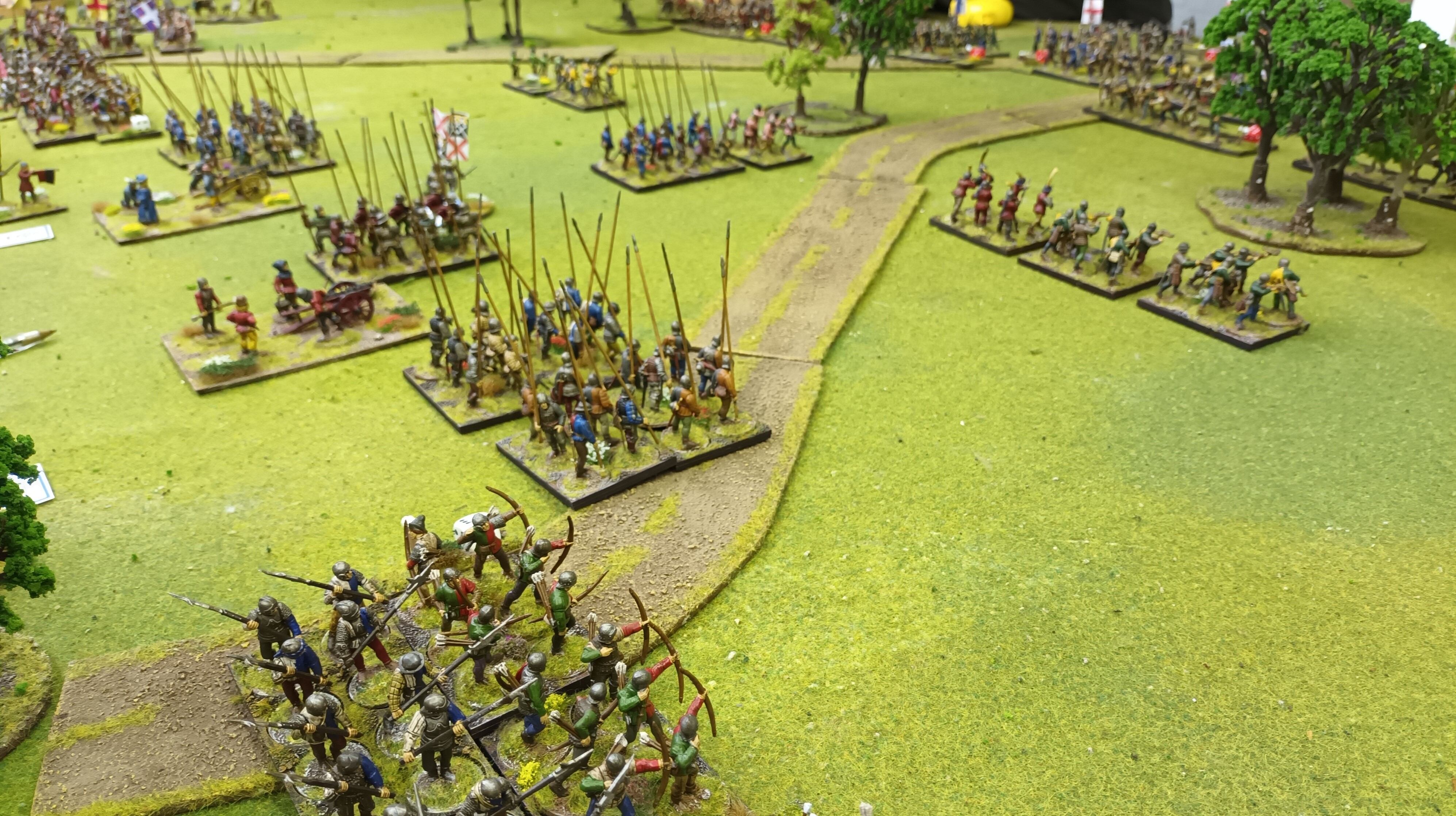 Across the field the more numerous Lancastrian bowmen began their deadly work at long range dropping a number of the skirmish units and beginning to whittle down the mercenary contingent. 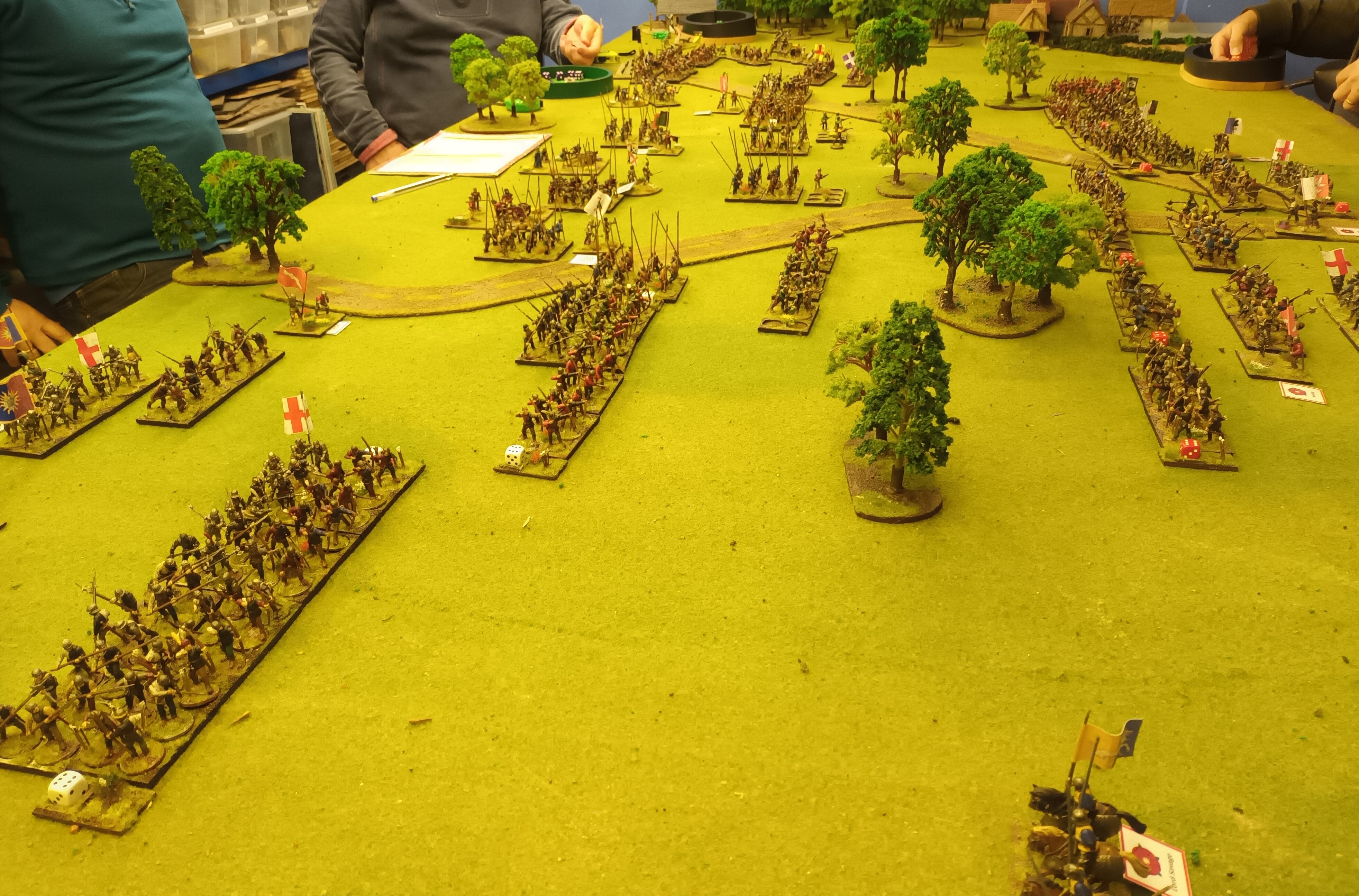 The neatly dressed battle lines pushed forward. This was going to be fun. 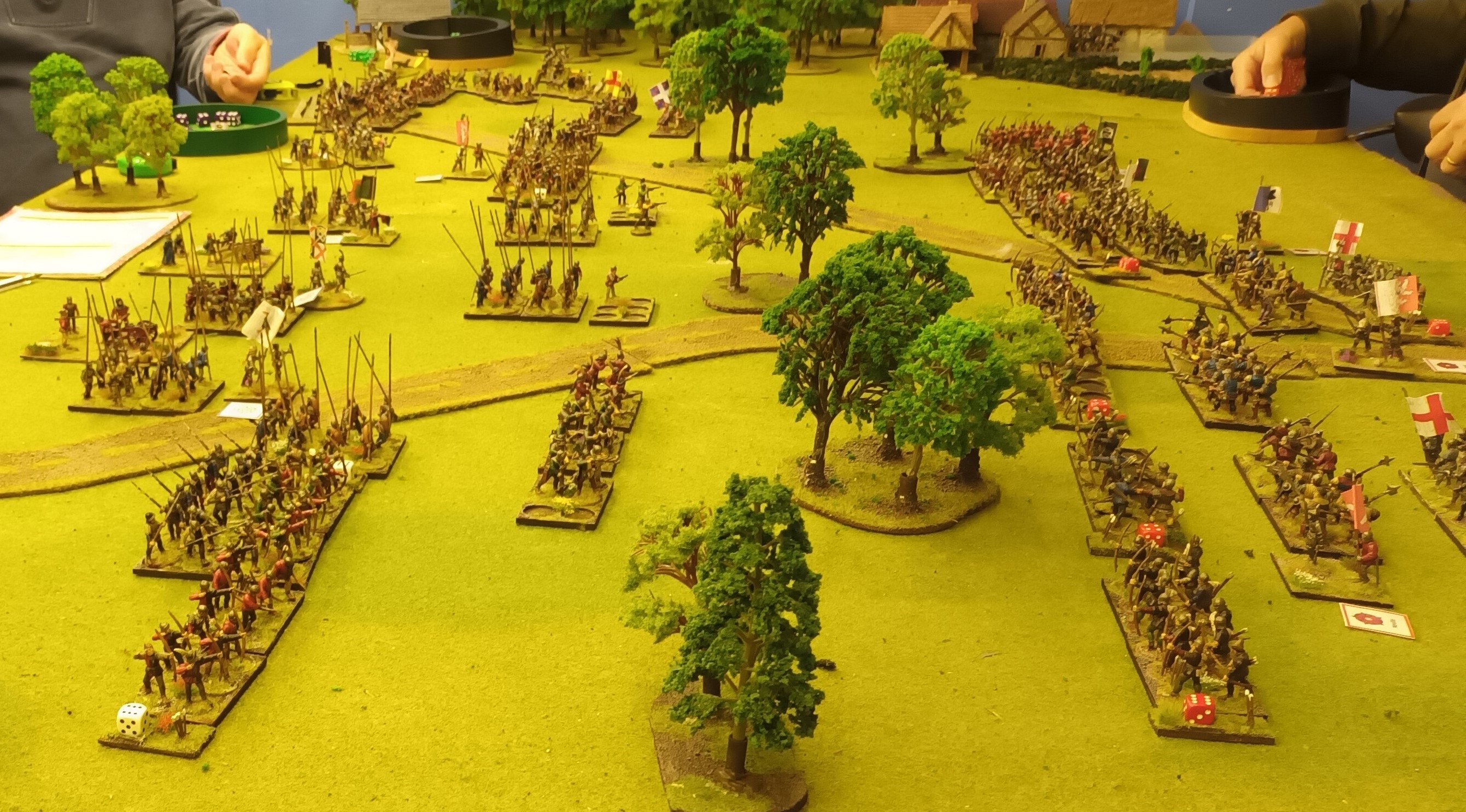 By now many of the German skirmishers had been shot down, but they had done their job of screening the pikes and wasting the Kings arrows. 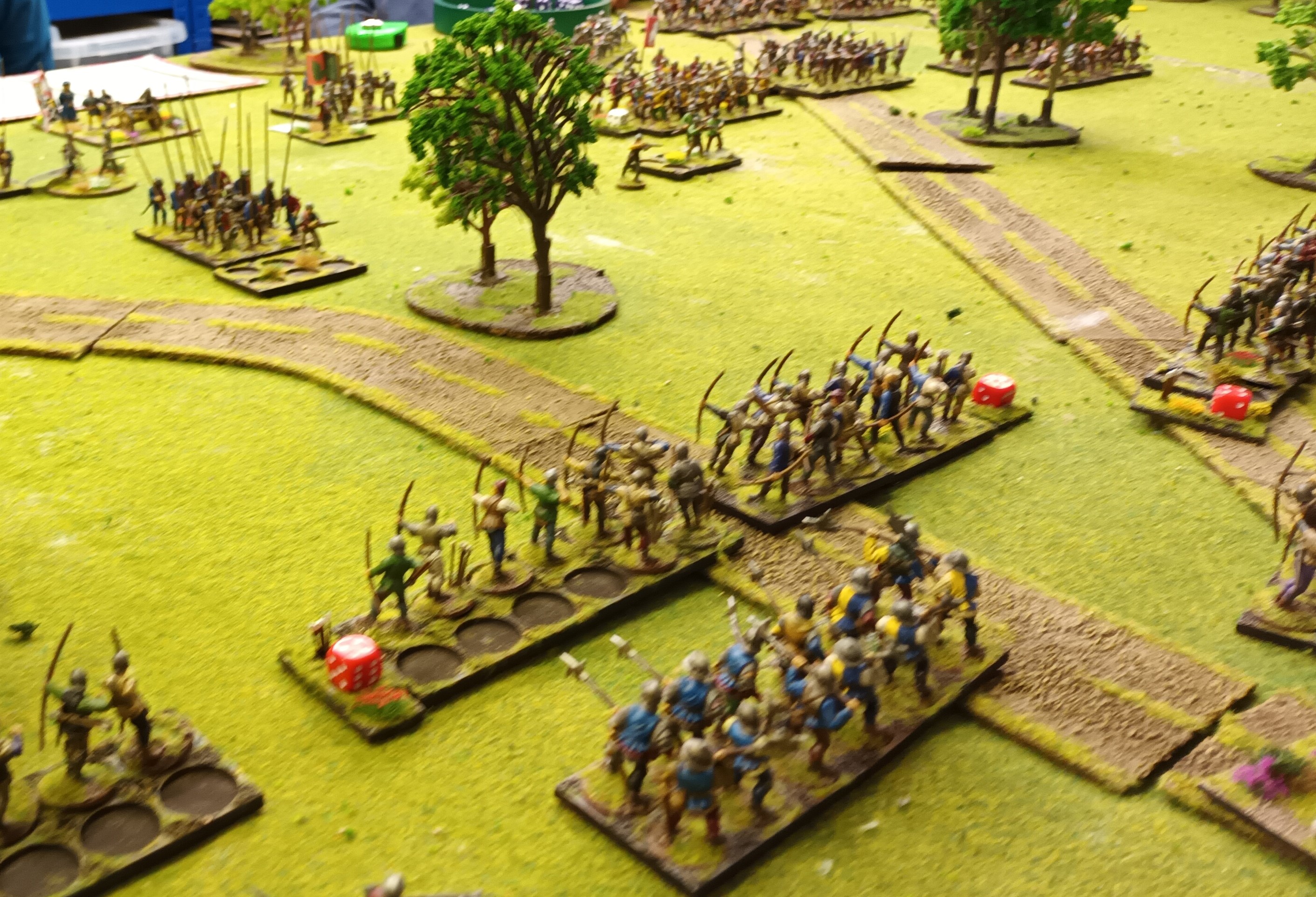 Weakened by previous skirmish and cannon fire the weakened Lancastrian bows could only inflict marginal casualties on the German pikes and their arrows were beginning to run out. 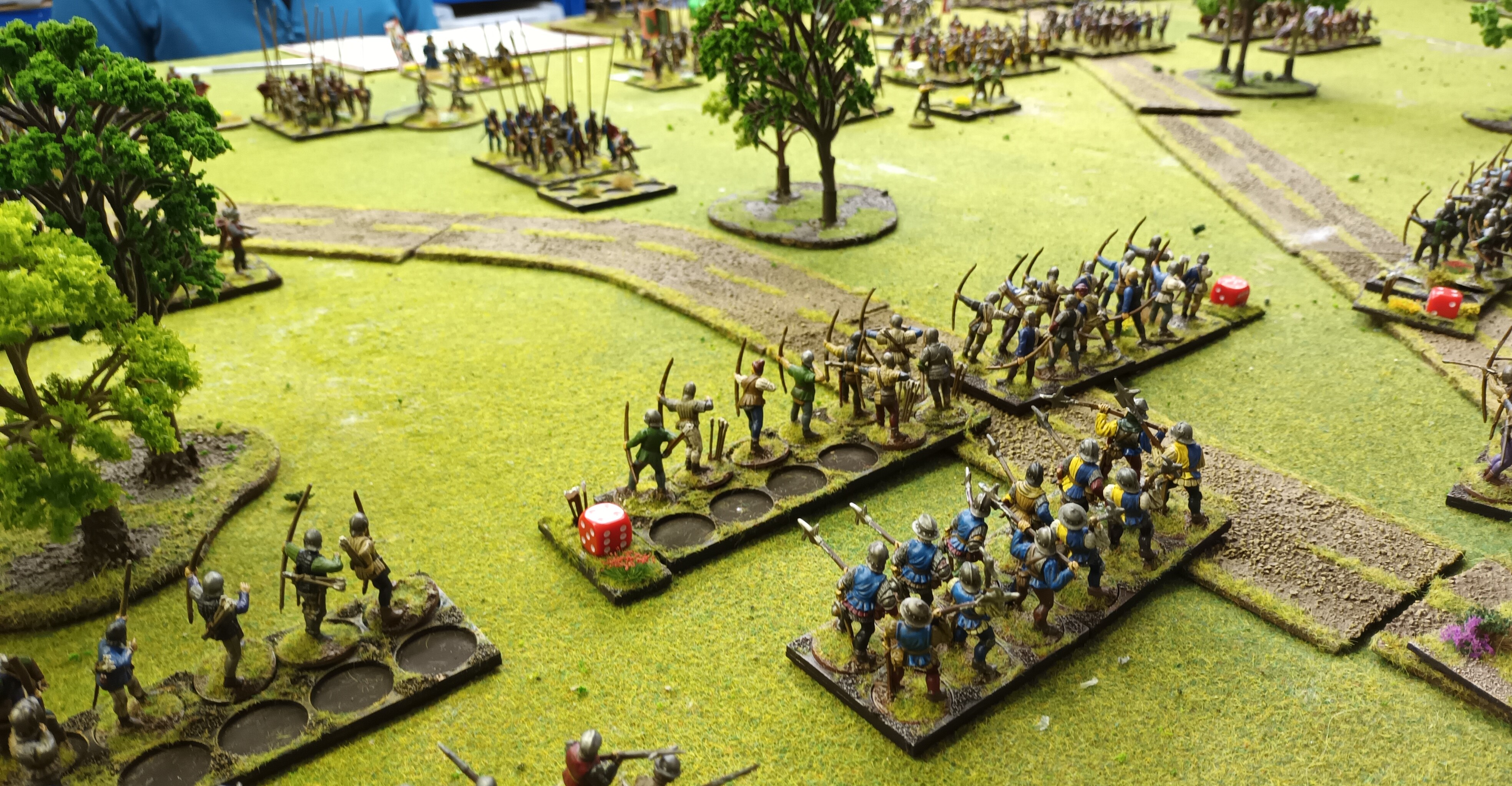 Over on the Yorkist left flank the Lancastrian knights charged into the waiting rebels...six Knights dropped with arrow fire and by the time they hit the block the men at arms stepped into the front blunting their charge and taking down a unit. 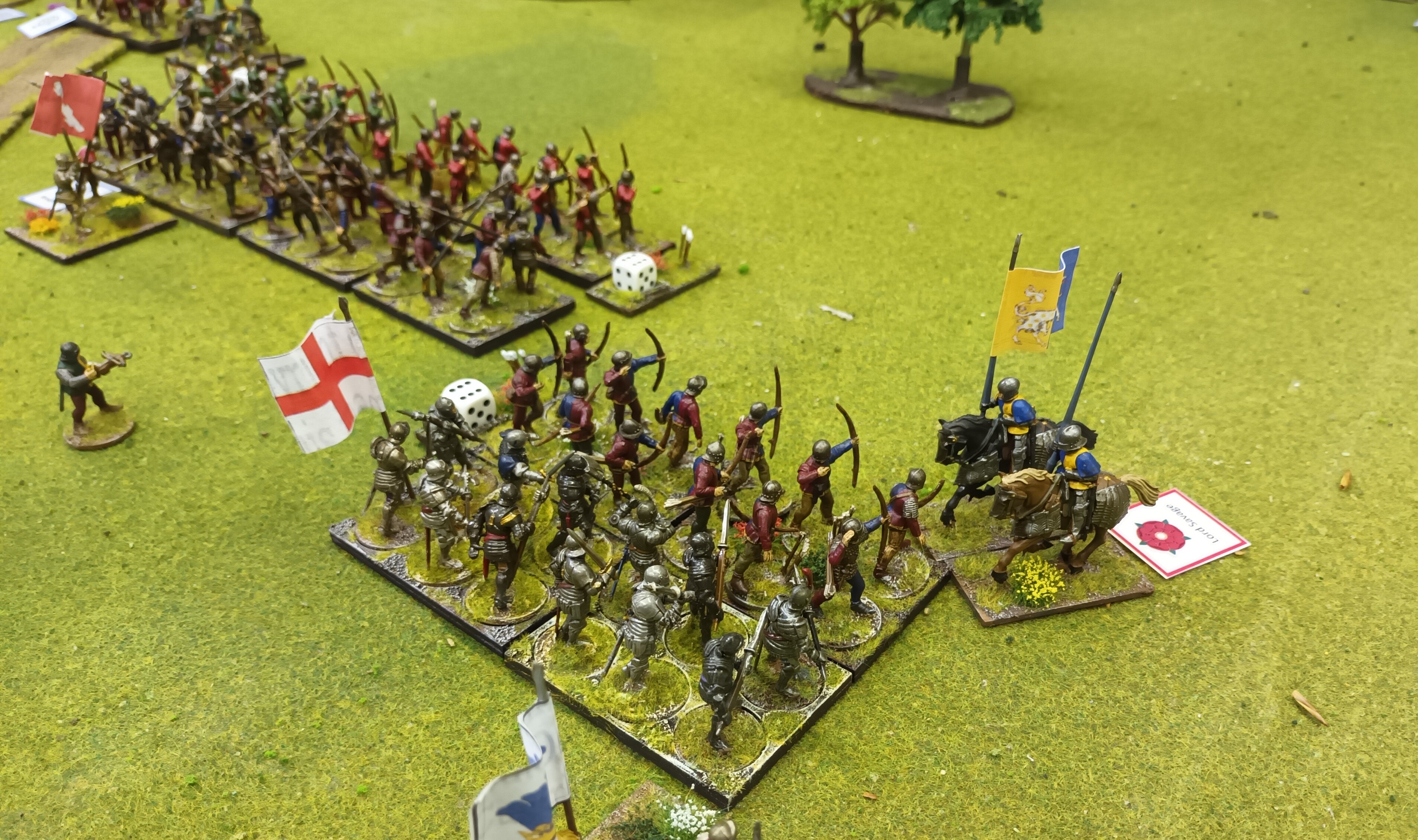 The Pikes moved in hitting the rather thin line 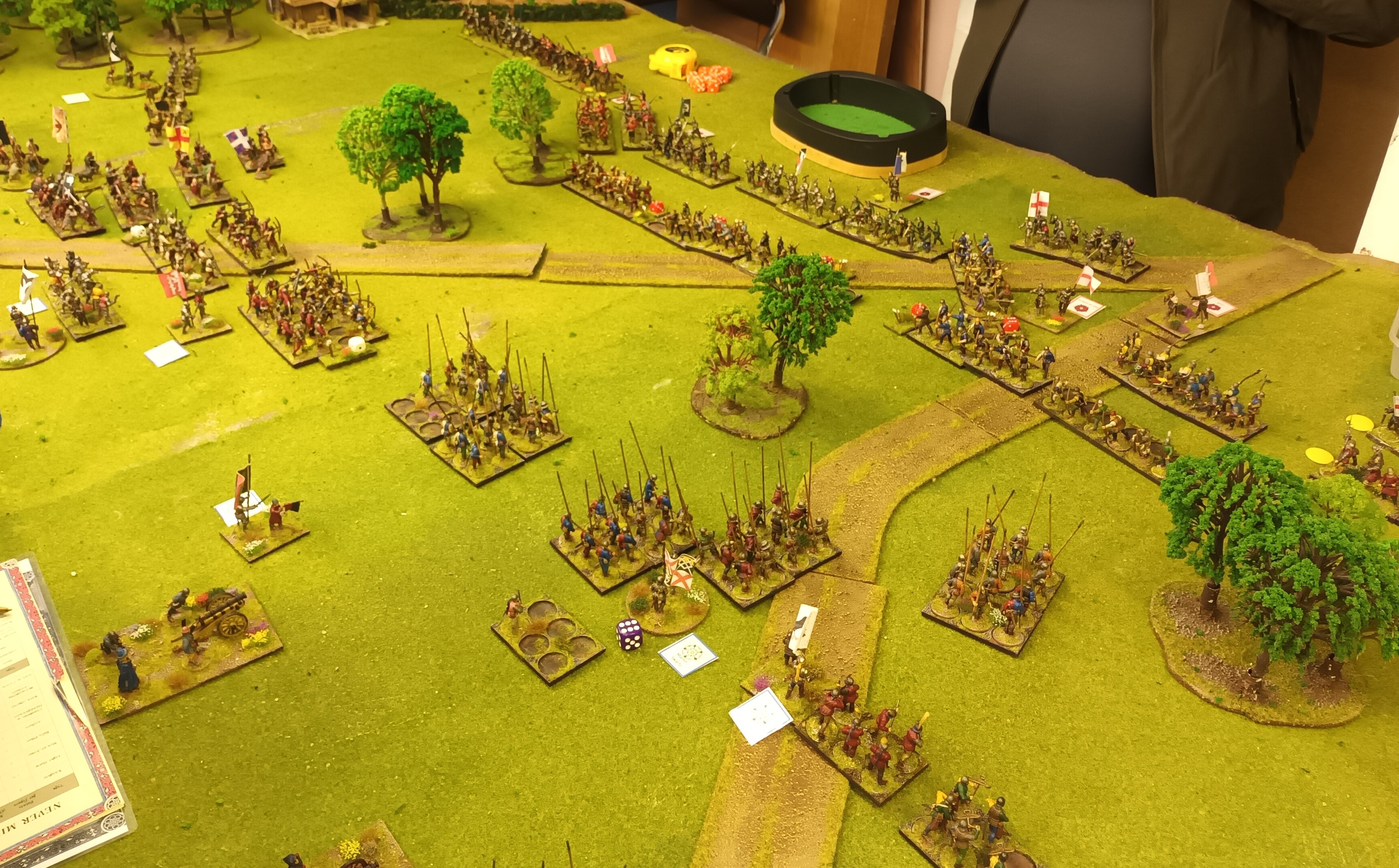 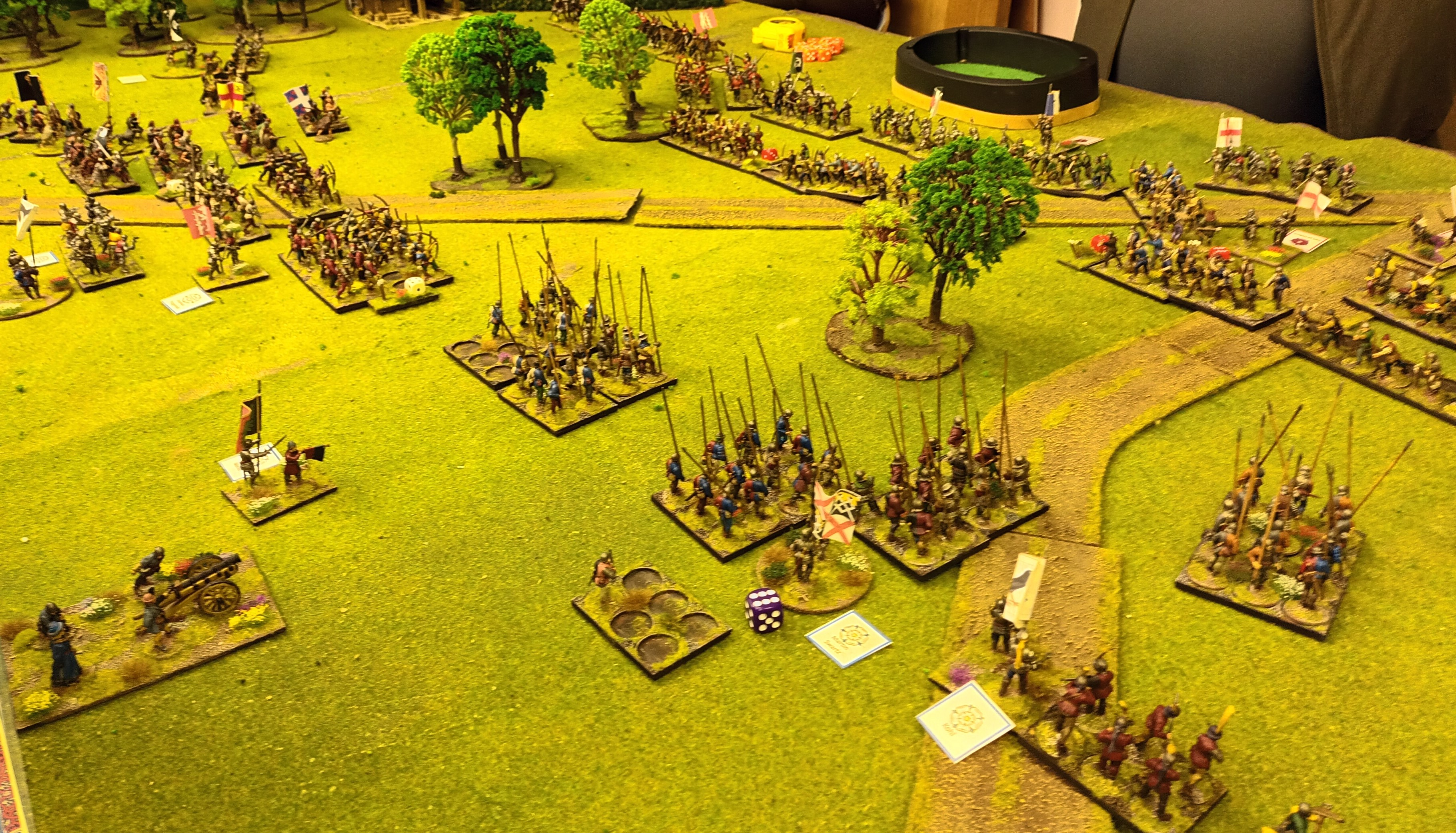 Mean whilst the Irish pushed forward - alarmed to see the first of the Kings reinforcements appear in front of them.

The Yorkists continue to hammer the Tudor lines with arrows - The pikes have taken casualties but are just waiting for orders to get stuck in.

The Kings light horse crash into the Kerns - another melee that wipes out more Irish thank Kings men. 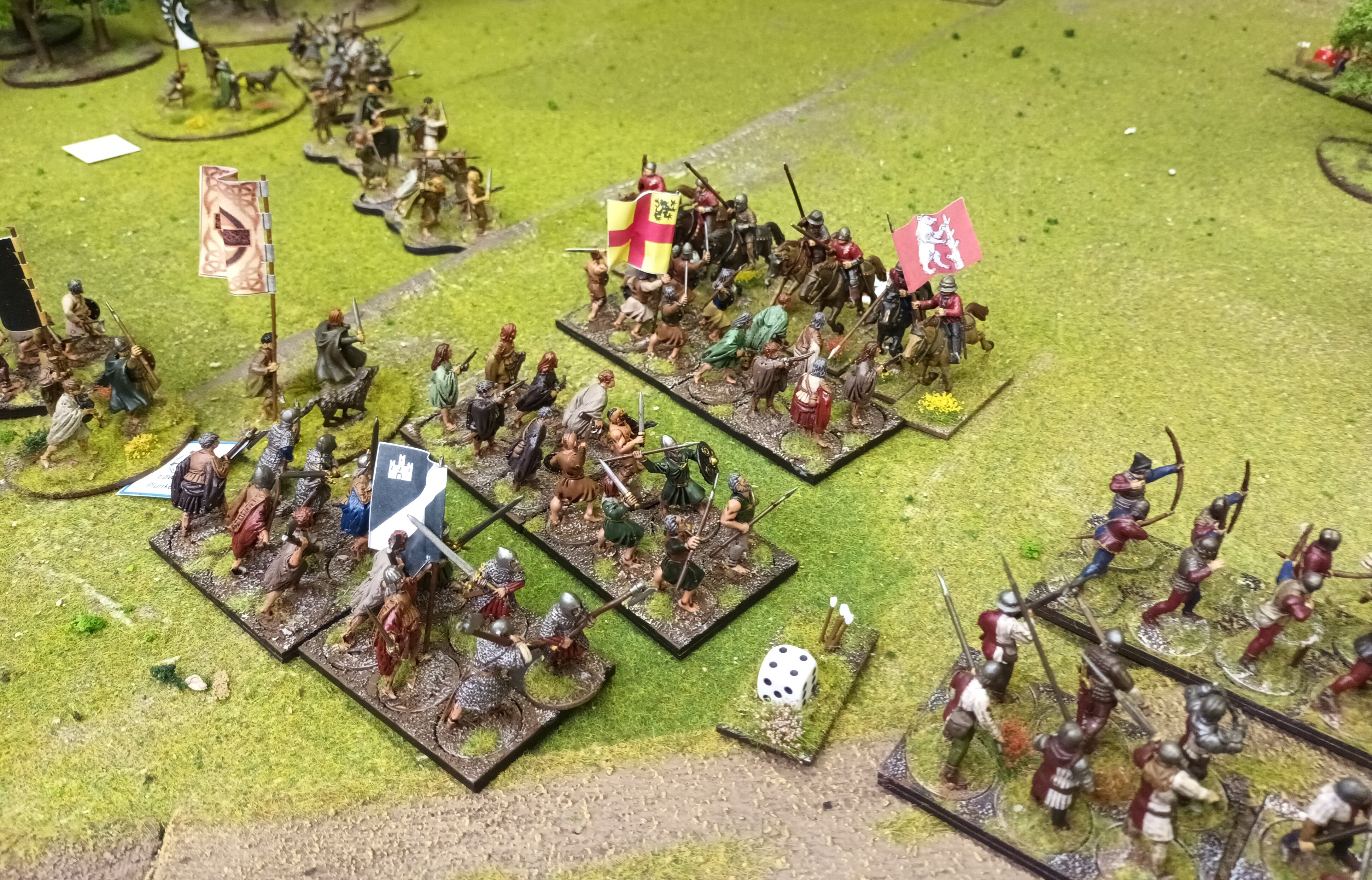 Finally the first two pikes barge their way into the Lancastrian lines causing havoc and chaos. Several units are wiped out on both sides and the morale counters are disappearing at an alarming rate

Back on the right wing the Yorkists push forward to unleash a volley of arrows.... 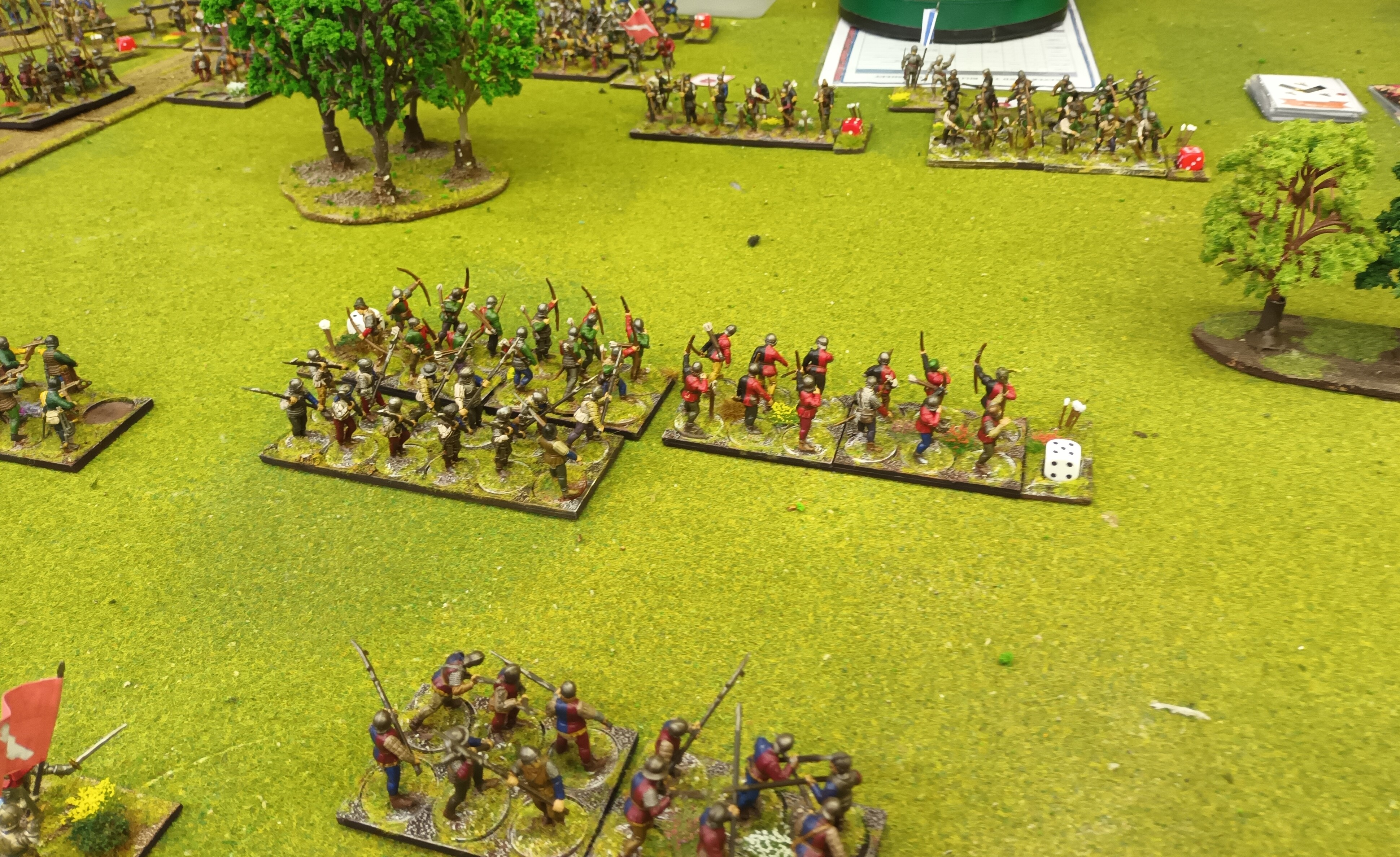 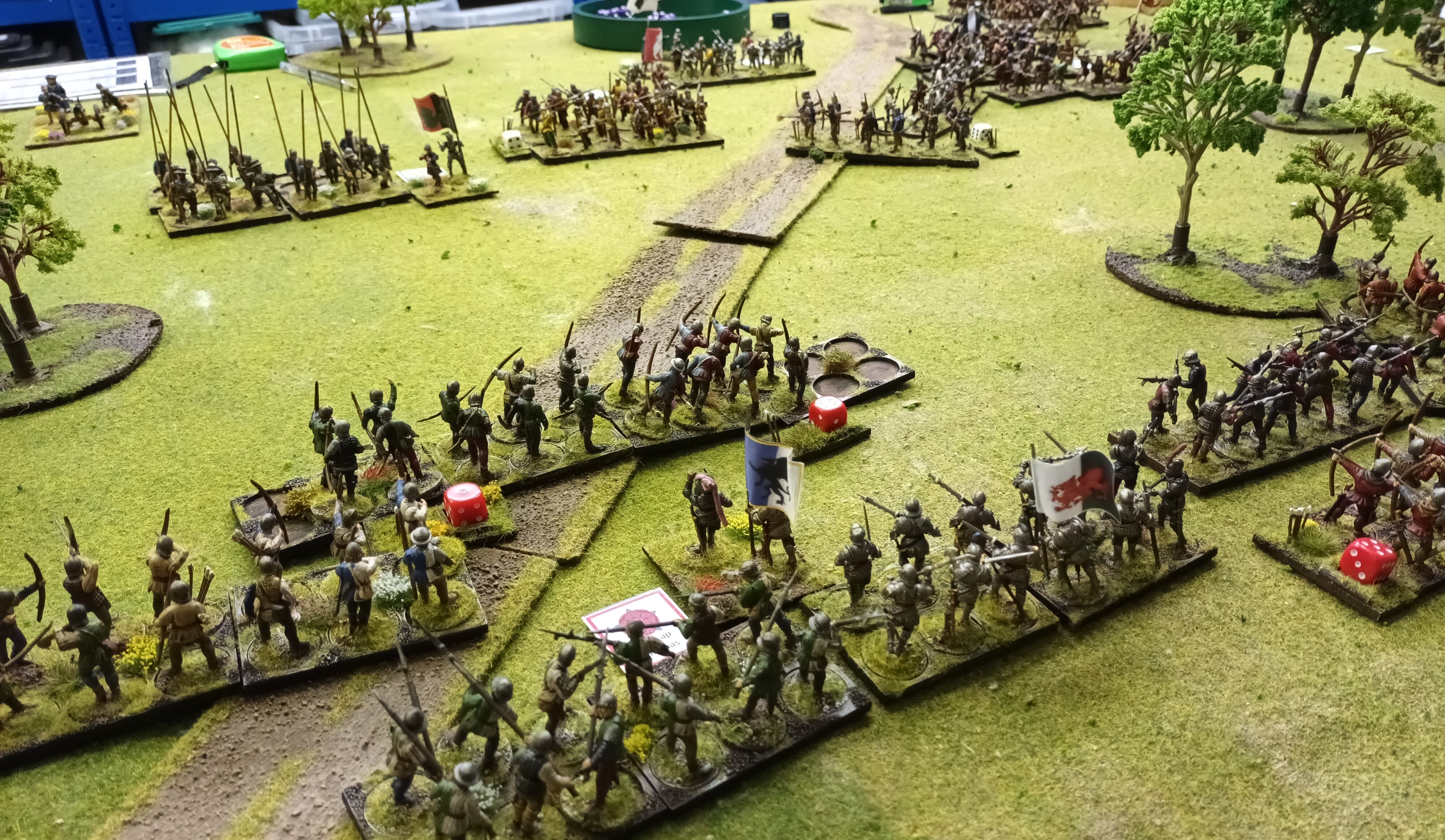 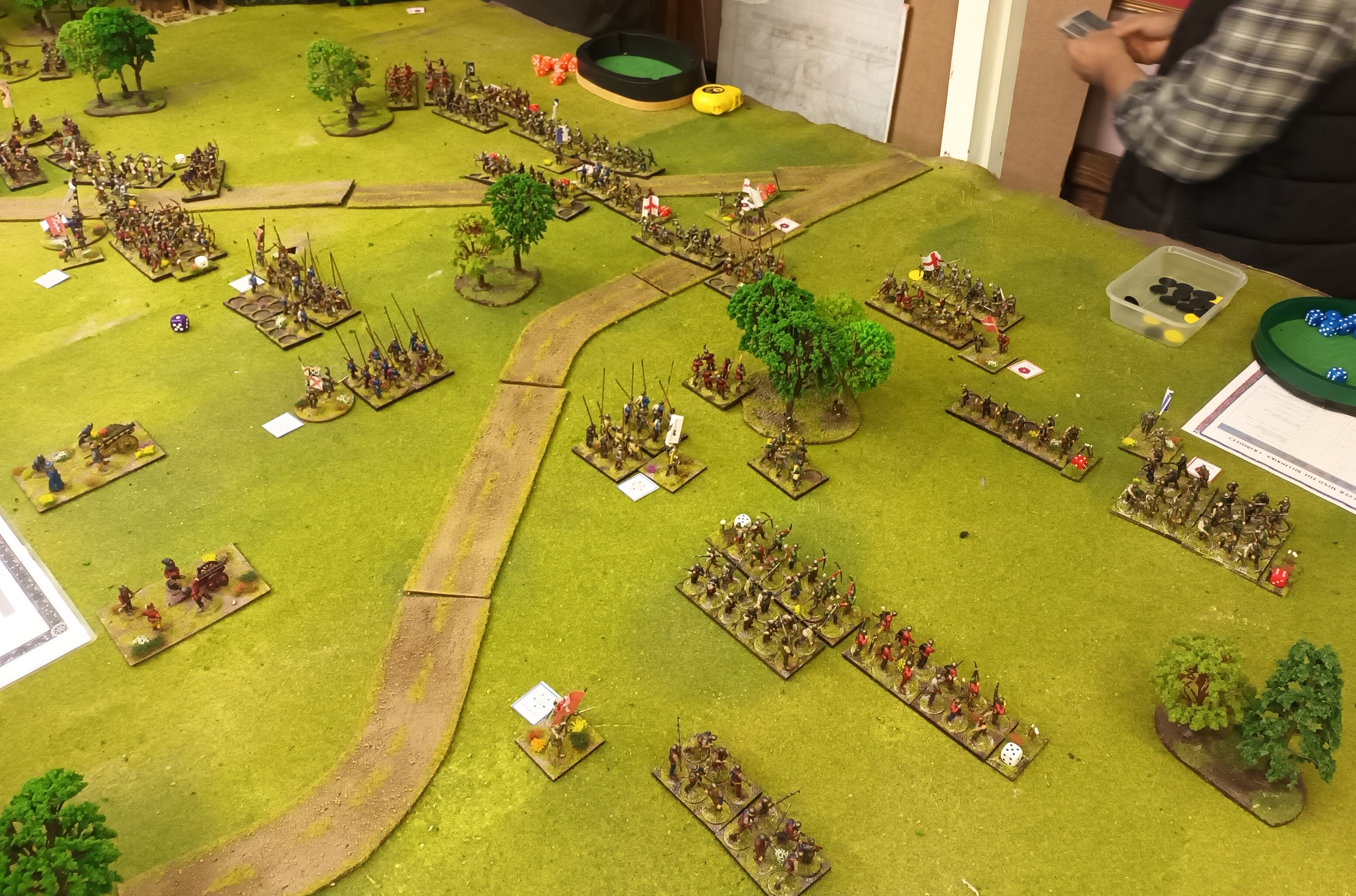 The remaining skirmish units target the men at arms unit of Oxford. 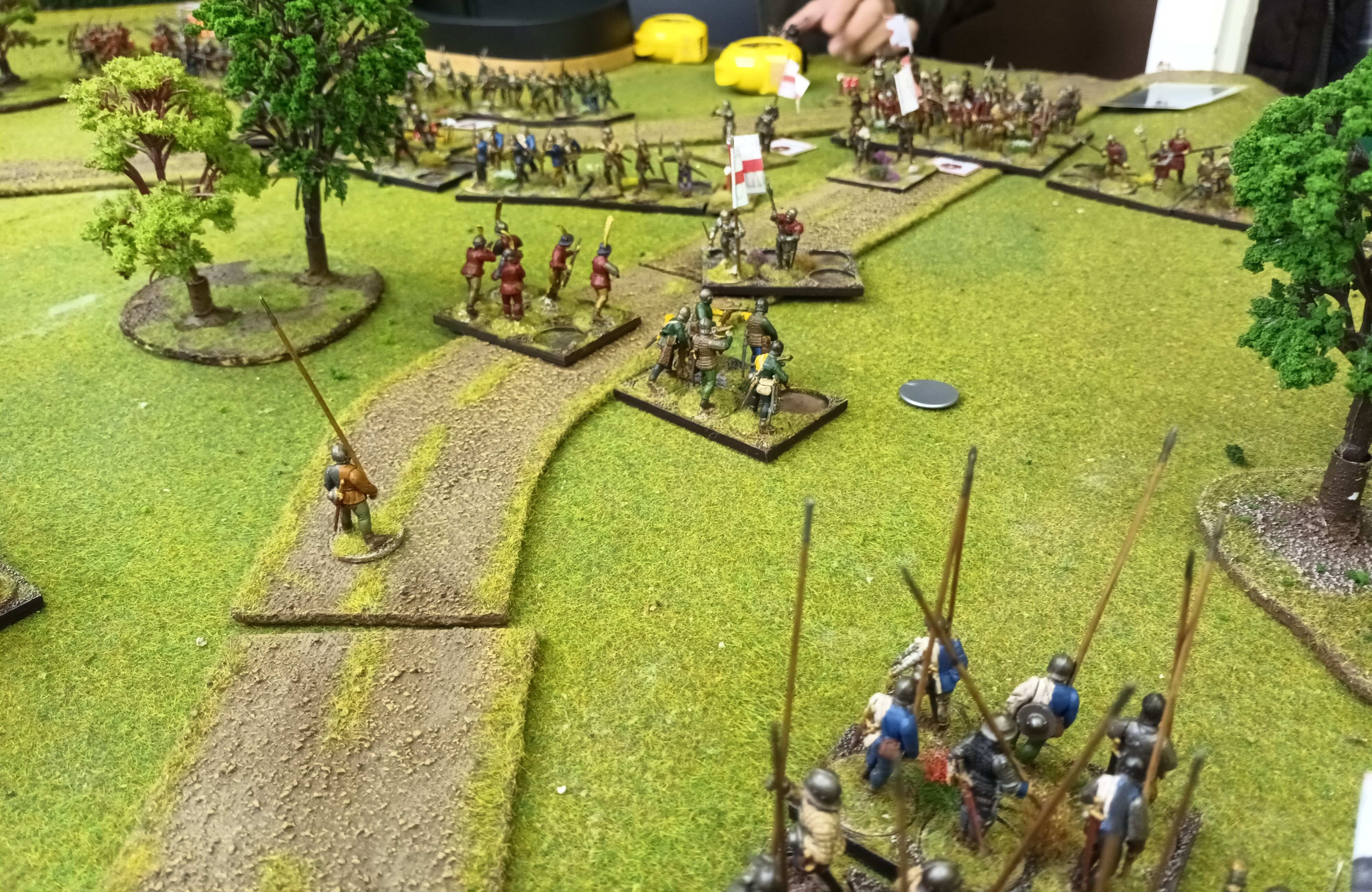 As the Pike block goes in to complete the kill against the men at arms the King plays a special card - a ditch in front of their charge ---bugger.

The Lines on both sides are really starting to thin out - the Lancastrians just cant get their reinforcements on the table in time to bolster both the line and more importantly their morale token count. 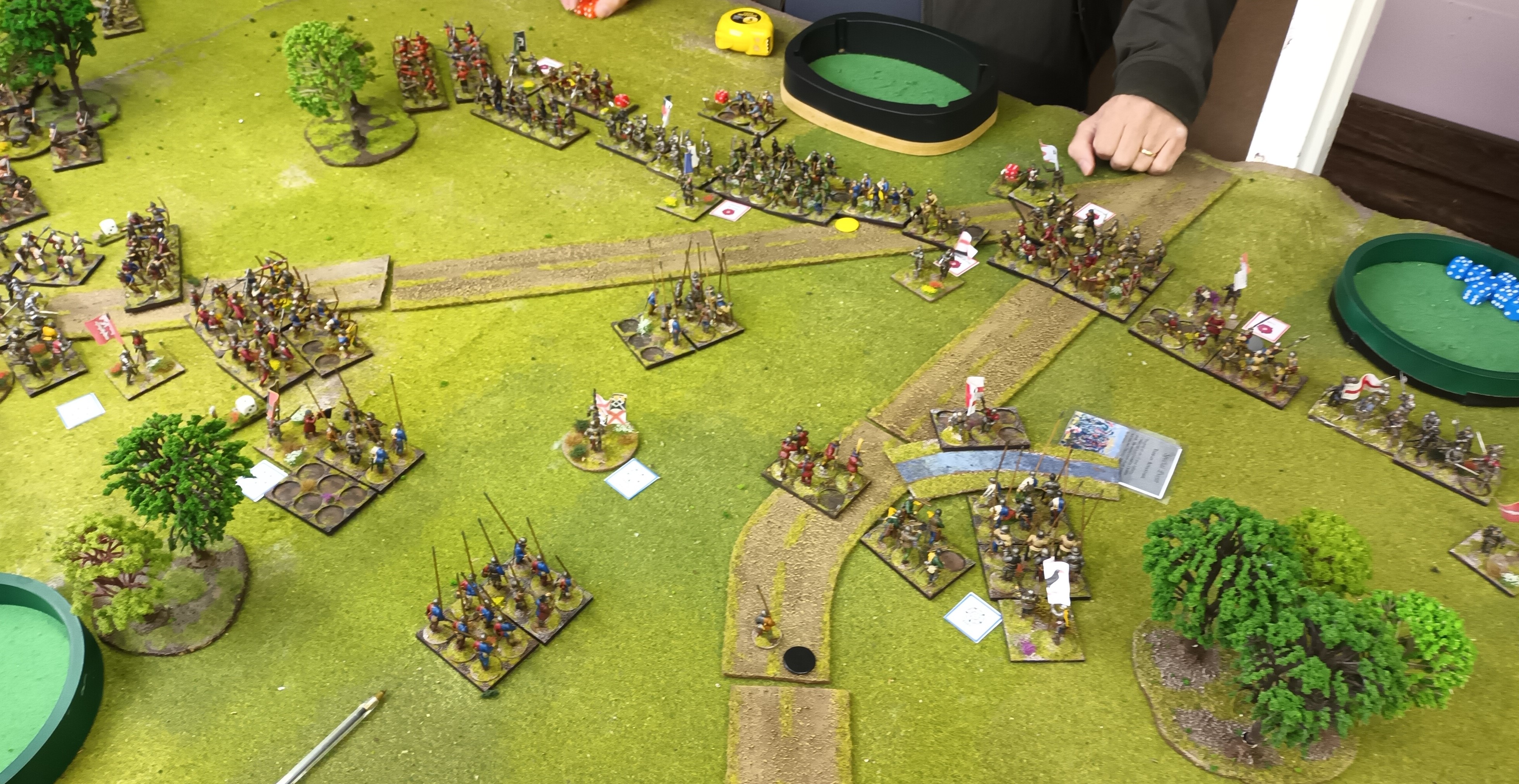 The Yorkists are starting to smell victory - the right wing is now at close range and two blocks of archers deliver over 20 hits on the opposite numbers - effectively wiping the Lancastrian left wing out in one barrage of arrows. 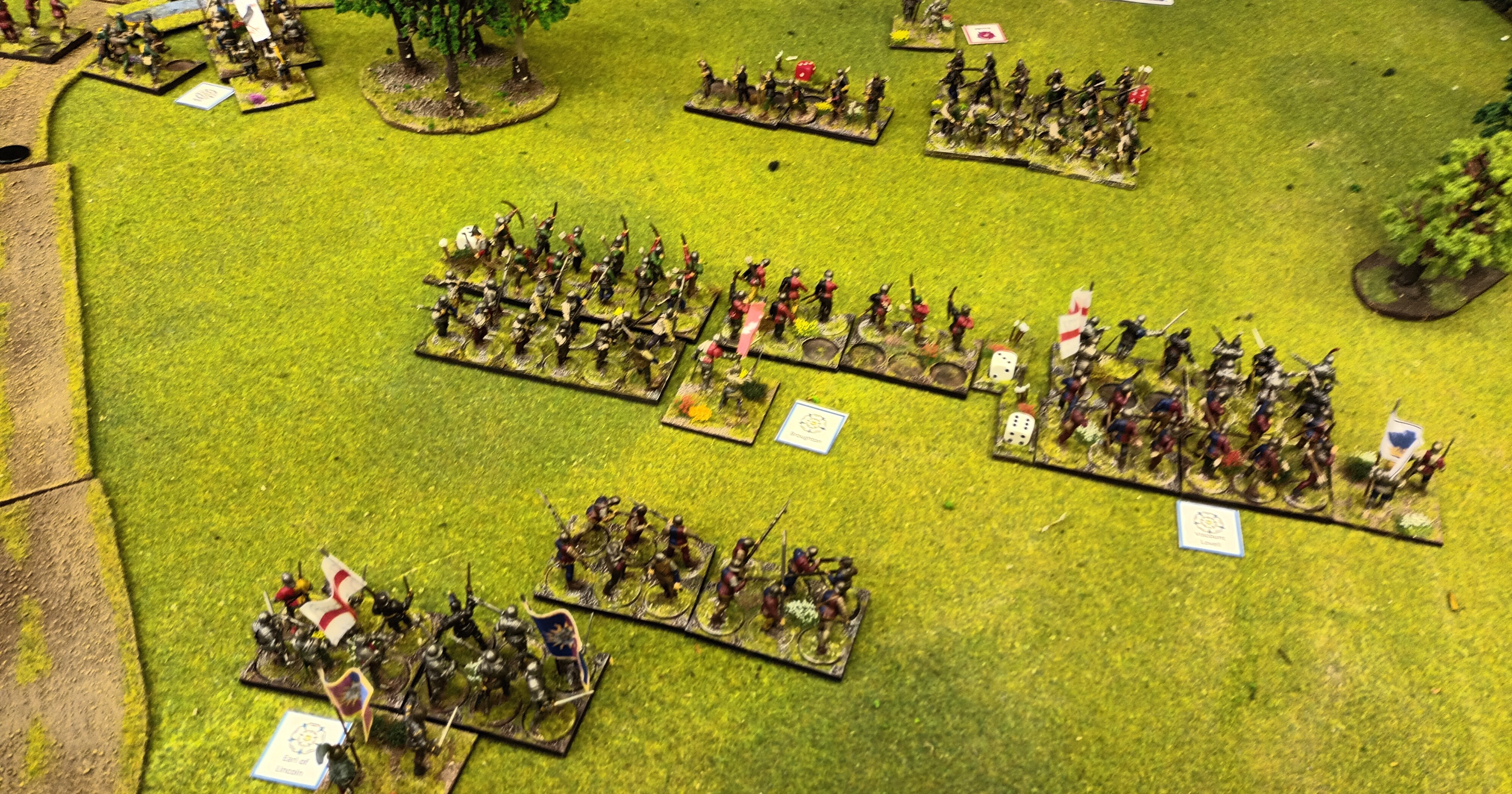 What's left of the Lancastrian archery unit targets the weakened bow unit bringing it to less than half strength.
What happens next is a disaster - the end of the turn causes all units below half strength to take a morale test. The weakened unit fails and runs from the field. This flight can be seen by four other units of equal status. Every single unit fails its test and routs. 10 Yorkist tokens lost in one go. Unbeknownst to the Lancastrian generals the Yorkists have one token left. Almost certainly it will be lost at the end of the following turn.
Equally unknown to the Yorkists the Lancastrians only have two tokens remaining, although a further six are expected if the reinforcements arrive on table
To win the Yorkists must destroy a unit fast - Pole, the Earl of Lincoln charges forwards to engage a unit of weakened knights previously sitting behind the ditch. A win here is a win for the pretender !! 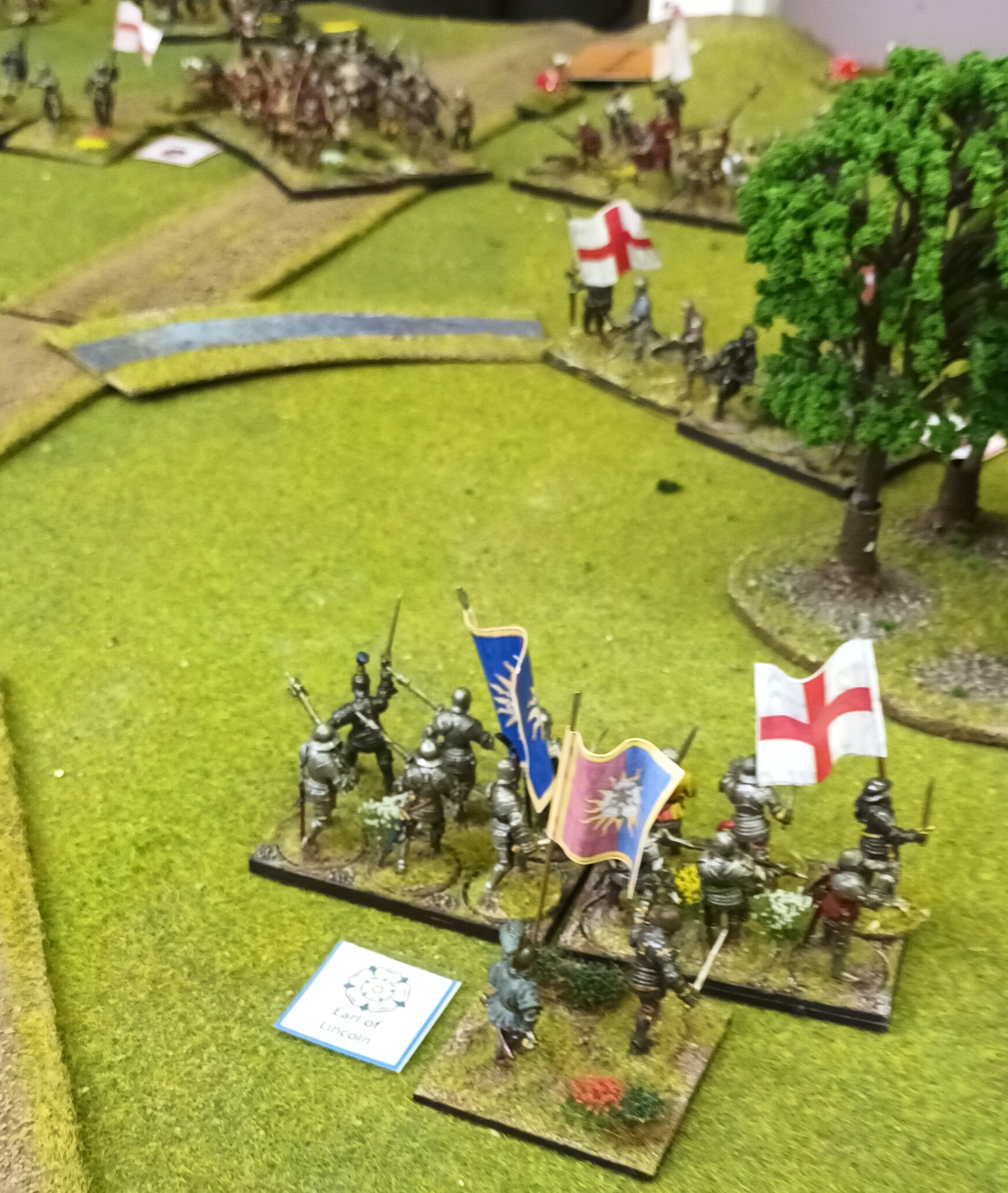 The Men at arms charge 12 " forward and into the opponents. Stop cry the Lancastrians as they play a bonus card - only one move gentlemen. Pole stops short.
Back on the right flank a unit of Tudor Bills destroys another Kern unit - with no tokens left the Yorkist cause collapses and Henry Tudor can sleep safely at night 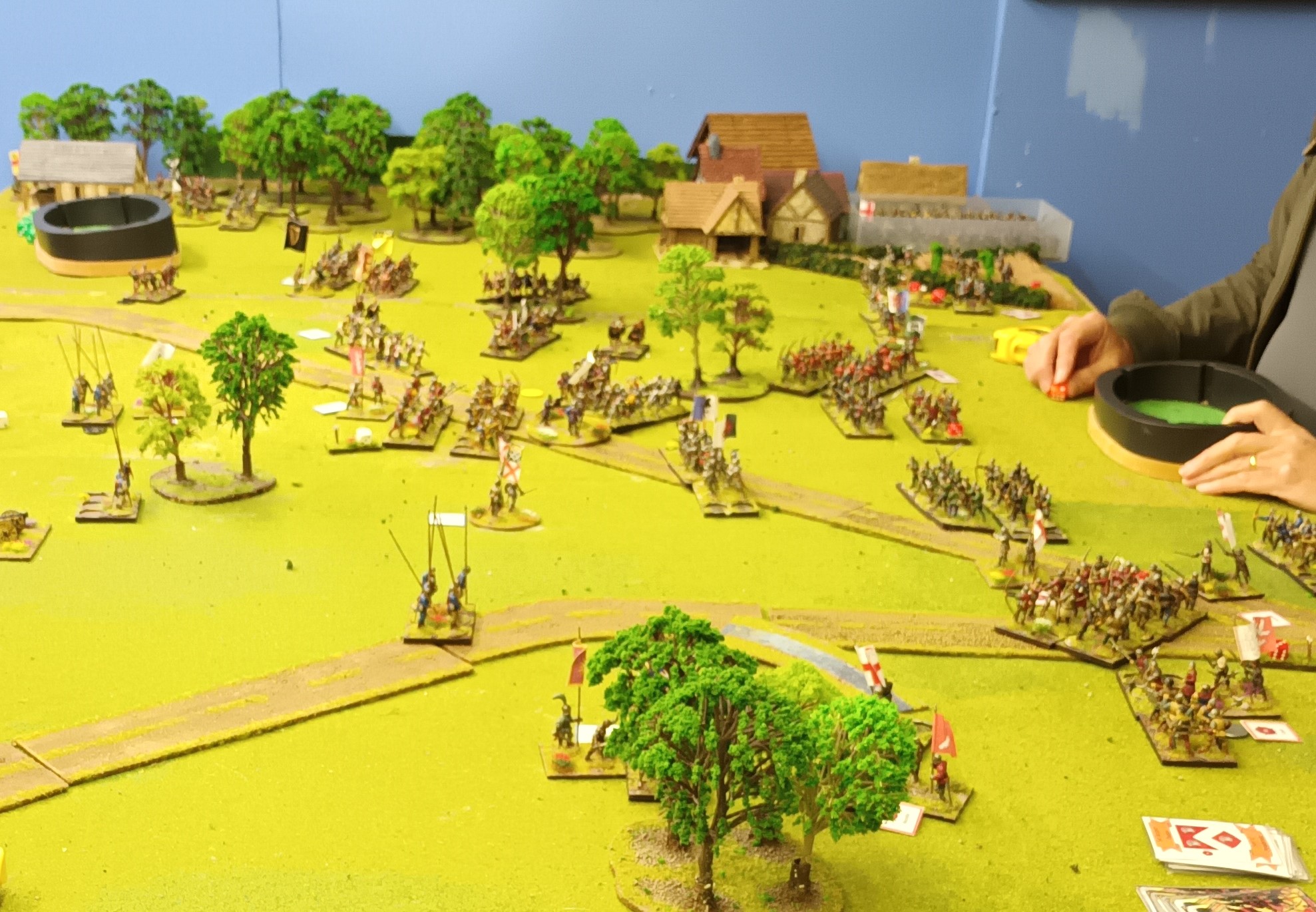 Well what a game and what a result. Both sides could have won or lost and once again it all went down to the wire in the last turn.

One particular aspect of the game was the need for the Yorkist army to press home the attack as quickly as possible before the full weight of reinforcements could be deployed by their foes. Only when the reinforcements arrived would their morale tokens be added to the pot. These 'time' element provided a wonderful narrative and by accident of design the reinforcement phase of the Tudor army worked perfectly. Had the Yorkists had not suffered two catastrophic morale failures that cascaded across both left and right wings then history may well have been very different.

The consensus of opinion across the table was this was an extremely exciting game, it was tense, brutal and very enjoyable. Certainly one we would visit again.