So are you stuck for Christmas present ideas this year? Can I be so bold as to make a recommendation that is not going to break the bank?

If the answer is yes and you are of a generation that remembers the classic Jaws movie of the seventies then this little boardgame is perfect. Retailing at around £25 this is a perfect present. 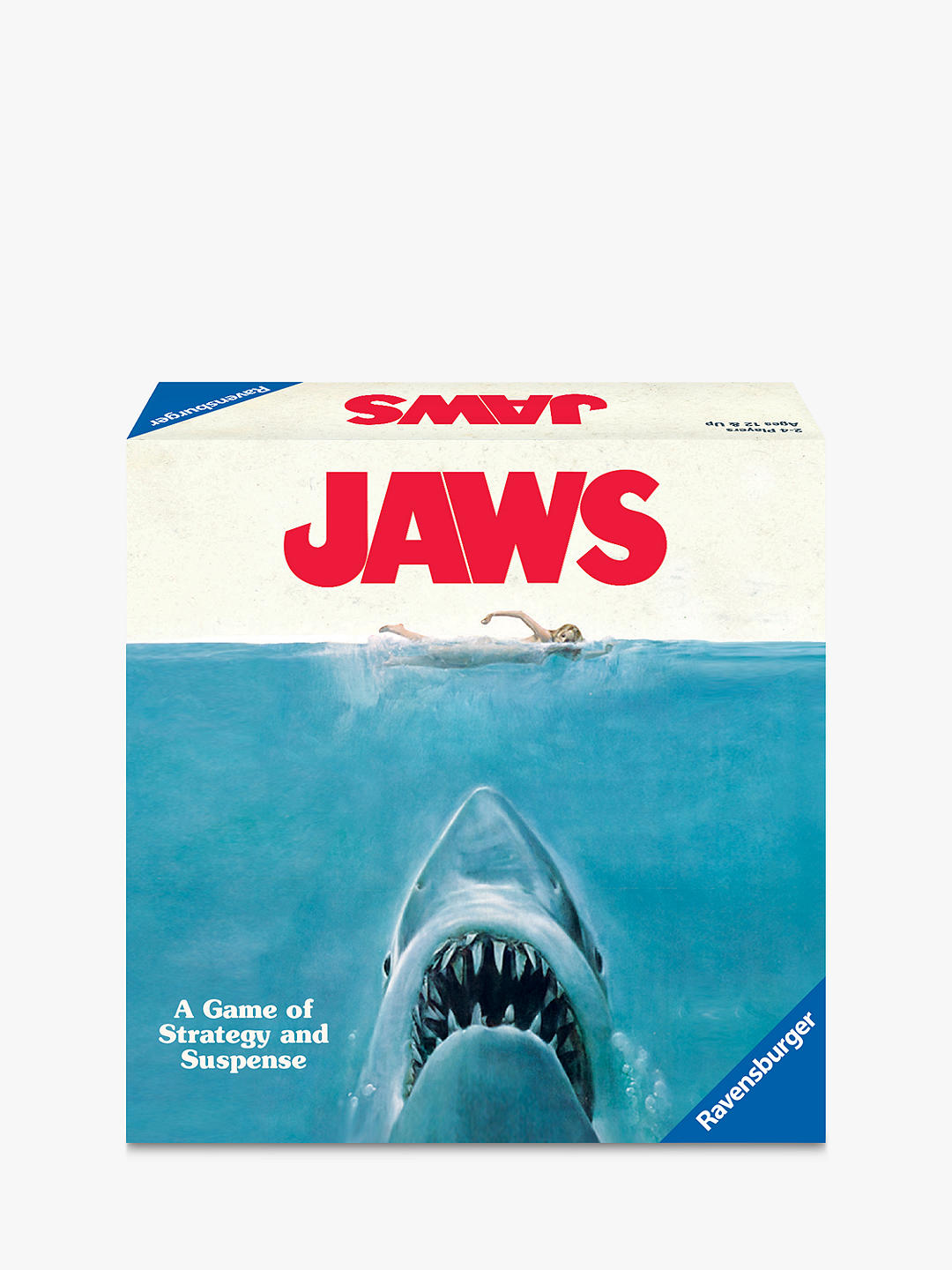 Although the components of the game are nothing special what you do get in this small boxed game is a virtual recreation of the movie played out in two acts and it is fantastically good fun. With one player controlling the shark (I believe he was christened Bruce on the filmset) and up to three players playing the human heroes (Brody, Quint and Hooper) this game plays out in around an hour.

In the first act our fishy friend swims around Amity island eating the dumb swimmers who still want to go into the water. The more he eats the stronger he will be in the final act. Whilst moving around the island the hunters first have to try and find him and then get Quint to attach two barrels to the beast. Whilst they are doing this they can try and rescue swimmers. The Shark player determines his moves secretly and only reveals where he has ‘eaten’ and whether he may/may not have triggered off sensors. Brody, Hooper and Quint all have a variety of tools to aid their search (binoculars, fishfinders etc) but the Shark has a number of power plays he can use to avoid these or move from the area where they might think he is lurking.

The tension is palpable, especially when Brody’s son ventures into the water (he’s worth two swimmers), and the shark strikes the opposite side of the island you are hunting. Once the shark has either had his fill of swimmers or has two barrels in him the game switches to part 2 on the Orca (the fishing boat).

Depending upon how many swimmers were eaten the human players receive x number of equipment cards and the Shark receives x number of attack cards.

The board is then flipped over to reveal a sea zone onto which tiles are placed to reflect the Orca. To begin with the boat is nice and intact but as the shark starts his attacks it starts to take damage and sink. This is reflected by turning over the tiles to illustrate a damaged part of the boat and then finally removed to show open water. If the Shark destroys the boat or kills all the crew he wins. Of course the crew win if they kill the shark. Each turn three resurface cards are placed out in the open. These are the zones where the shark might emerge. The Shark player secretly chooses one and awaits the crew’s move. Each of the crew can then move around the boat and target with their weapons where they think the shark might emerge. If they get it right they can hit the shark before it starts chomping. If they get it wrong the Shark still chomps. As you would expect the crews gear fits with the film – there are boathooks, hammers, machetes and rifles. There is even the canister. Hitting the Shark is straightforward – each weapon denotes the number of custom dice you roll and from the total you subtract the sharks evade score (as shown on the surface card). Typically the Shark gets more powerful attacks with a low evade or weaker attacks with a high evade. Every hit adds towards the kill total.

The Shark also has plenty of options, not only can he choose where he will attack but he can augment his attack with the power cards. Destroying the boat means the crew are more likely to end up in the water and then can targeted. As the various parts of the boat disappear the Shark gets more options where to attack and this is where the game gets quite tense. We have played this a few times now and  want more. Its fun, strategic (but not in a heavy sense), and it perfectly captures the thrills of the film.