As promised here is the latest battle report from our continuing saga of the Wars of The Roses. Monday night saw myself, Vince and Tony take on the roles of the Yorkists whilst Mark F, Alastair and Stuart lead the line for the Lancastrians. We were refighting the Battle of Tewkesbury.

All the details of the battle including background, set up and orders of battle can be found in the previous post HERE

This was a relatively tight battlefield with the centre dominated by hedgerows and fields.

Our game opened with the usual maneuver phase which was cut short when the Yorkist commanders realised they should be battering the Lancastrians with their artillery before the enemy closed. 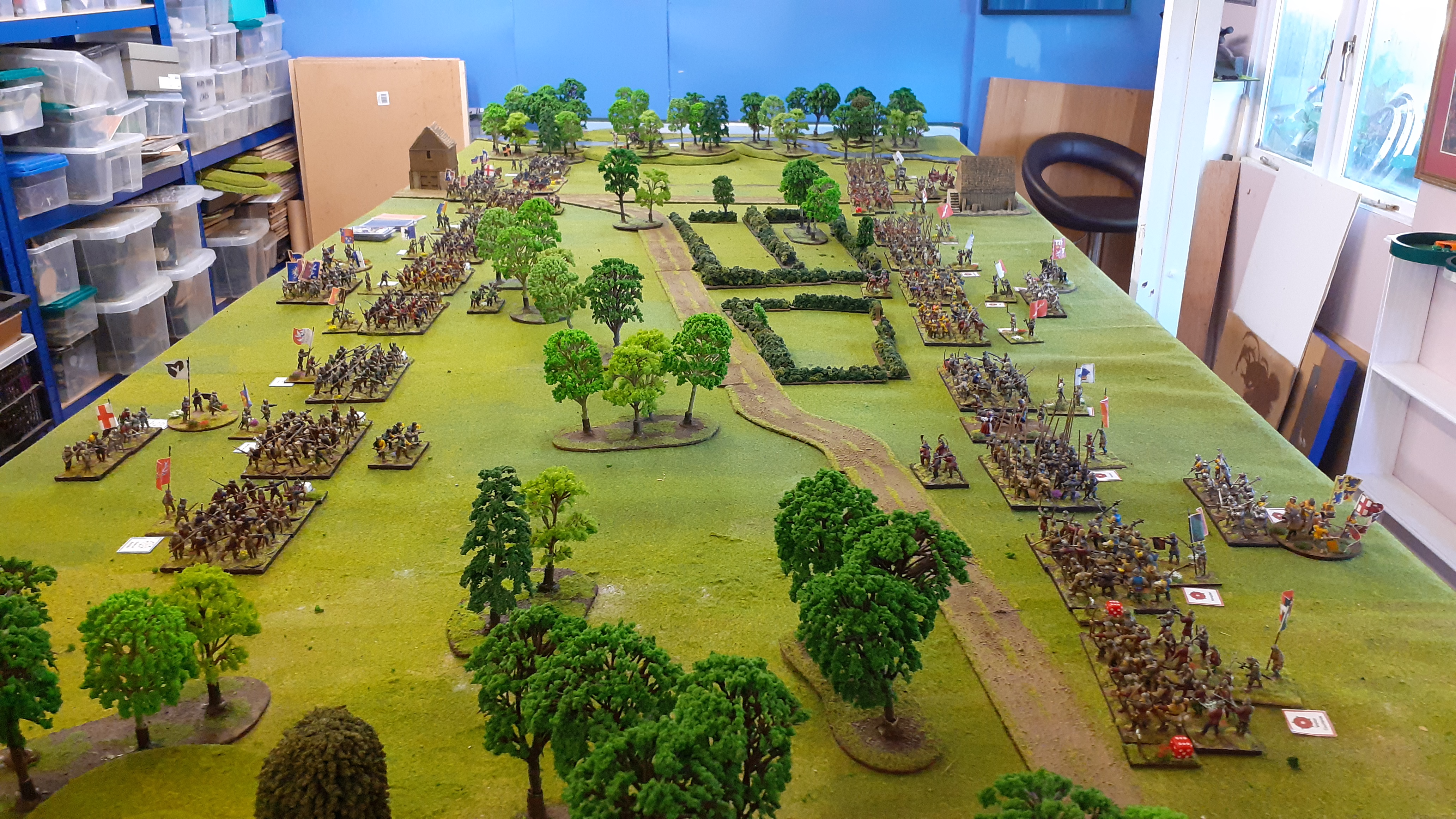 In the far distance of the picture below the Yorkist guns opened fire on the advancing enemy, across the field the Lancastrians poured forward to secure the hedgeline. 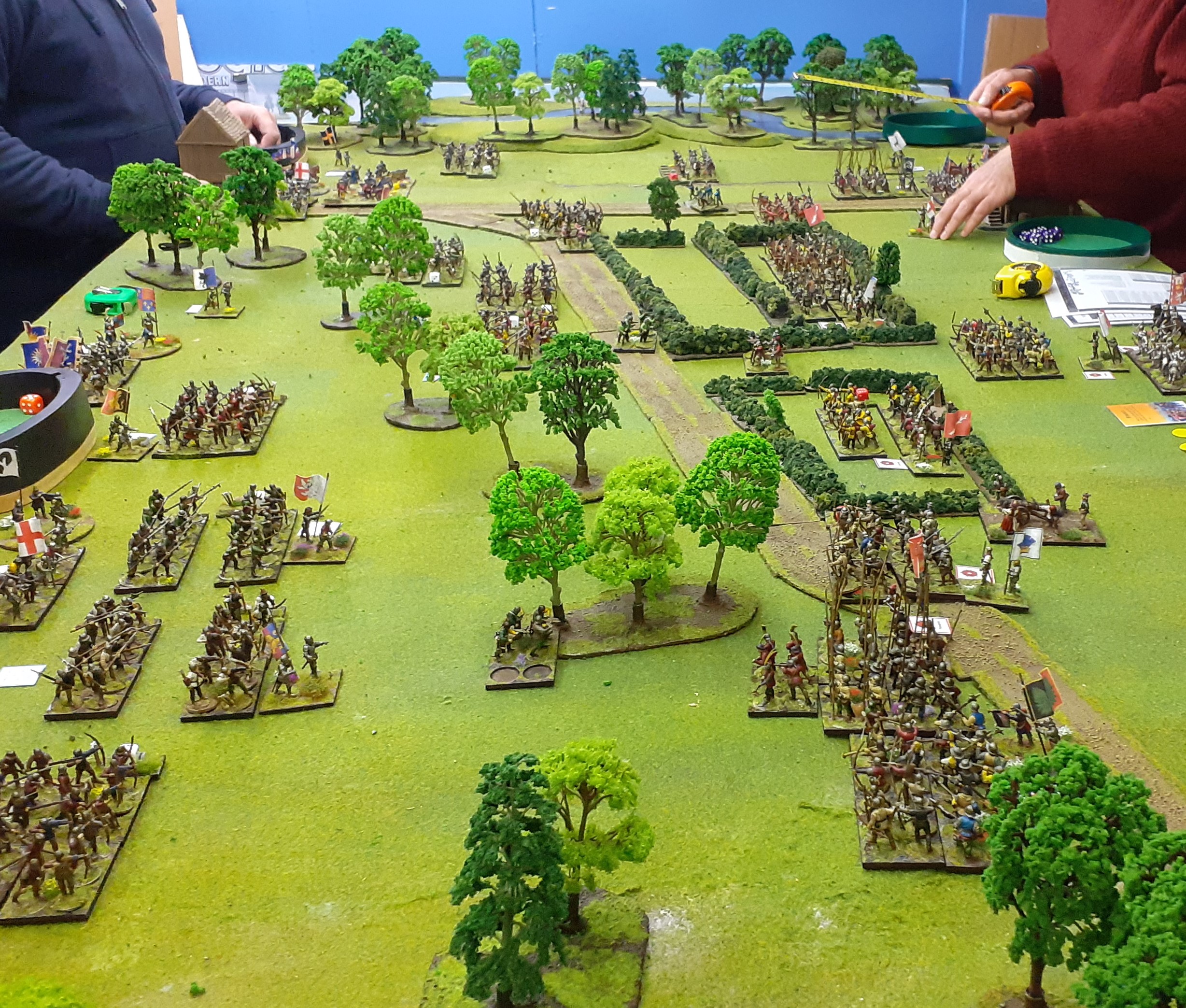 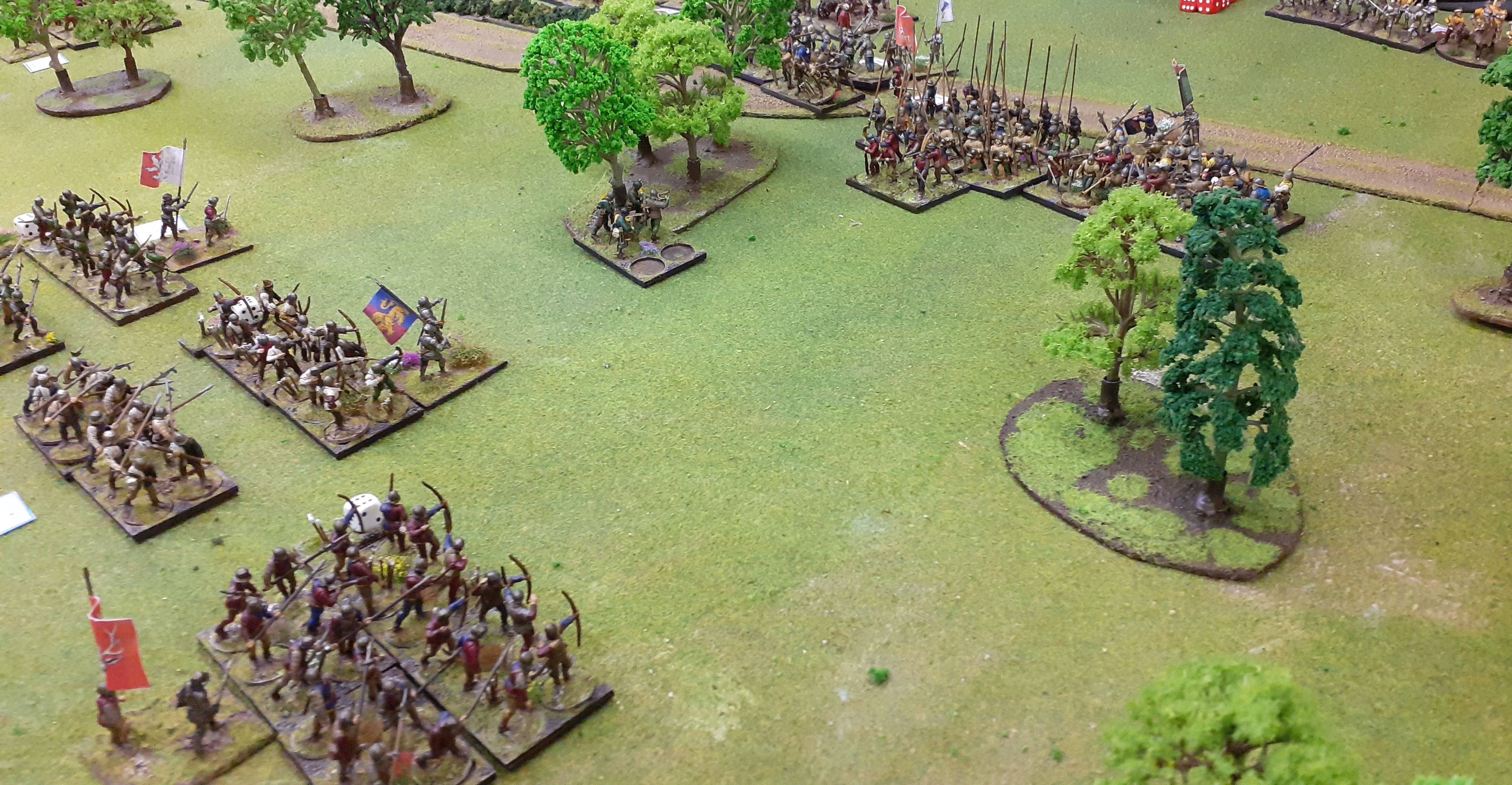 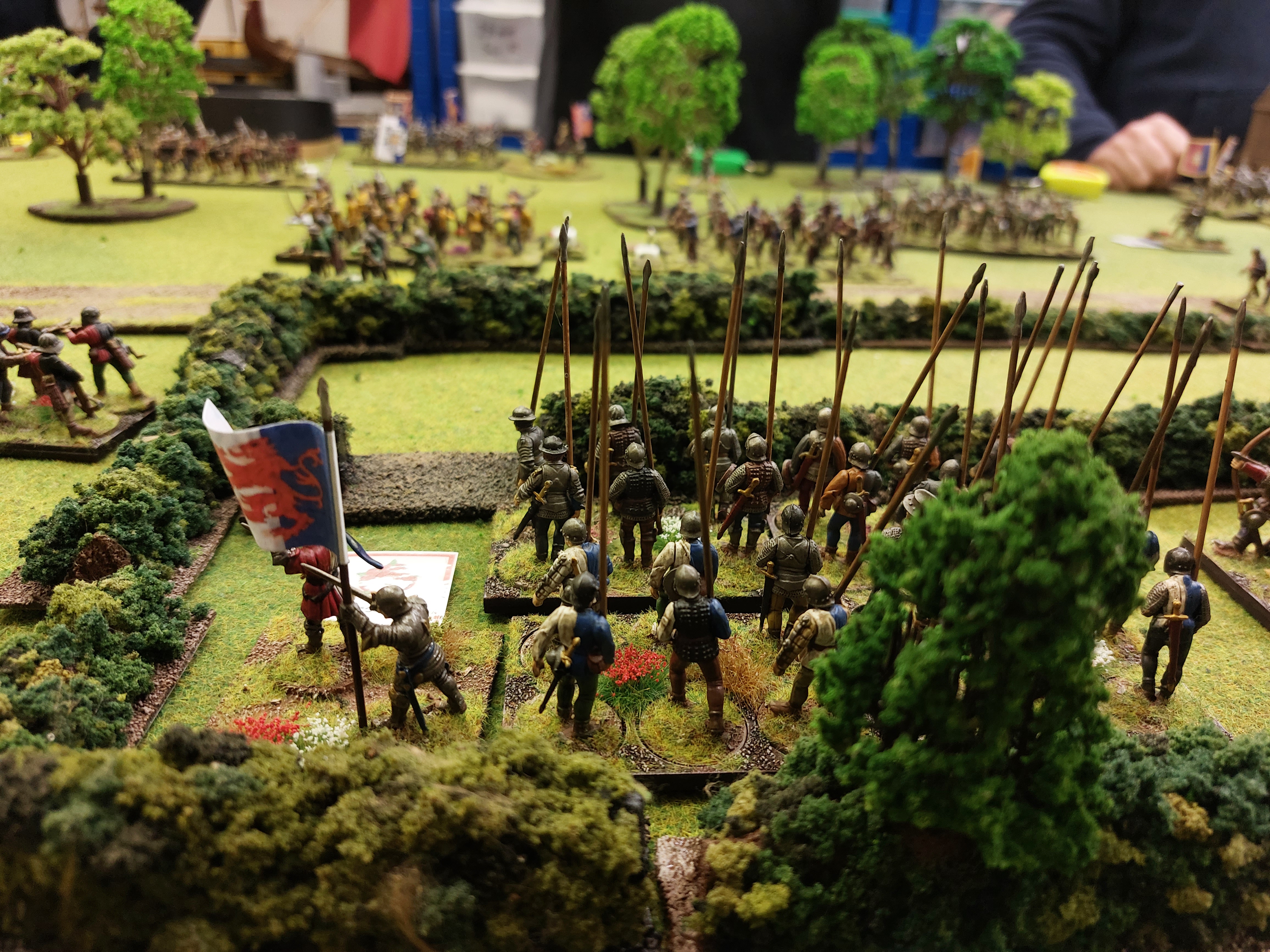 The Centre soon became a solid mass of Lancastrian forces. 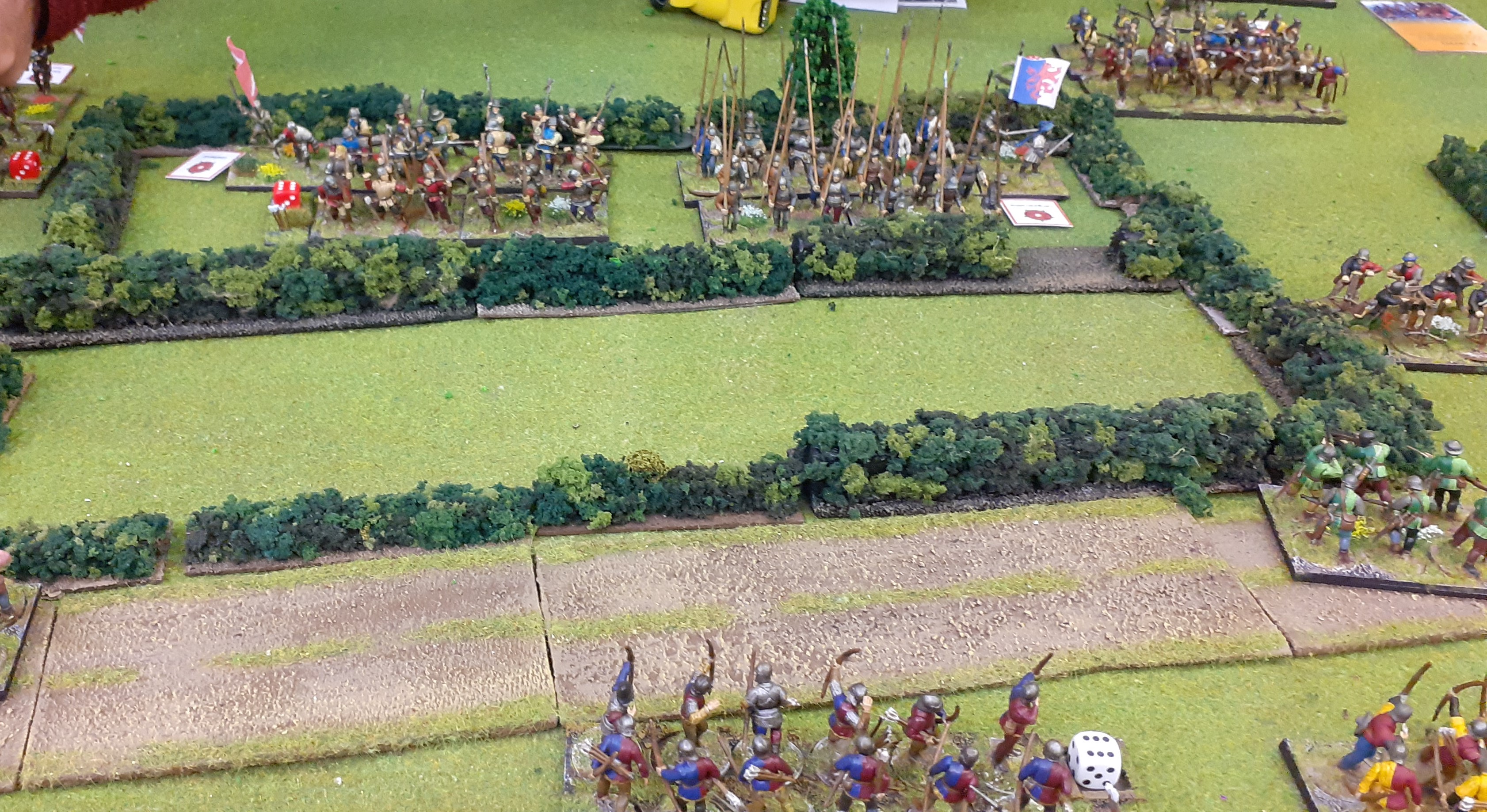 Sporadic fire erupted across the table from a few skirmish handgunners and crossbows. 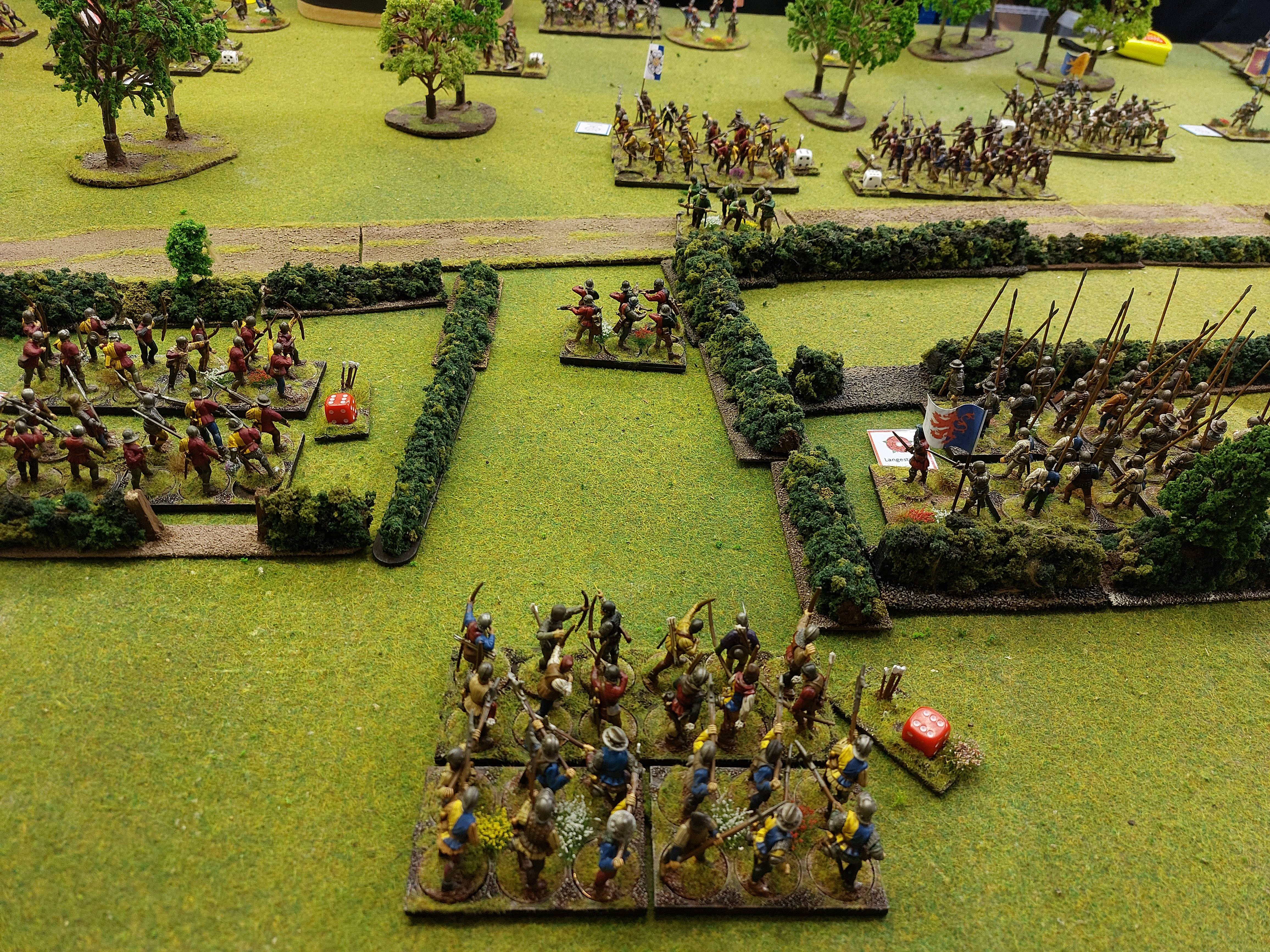 By now the Duke of Somerset (Stuart) had started to force his troops forward into the waiting guns of Gloucester (VInce). The artillery barrage soon found its mark and swiftly decimated an advanced unit.
As the guns poured their lead shot into the mass of Lancastrians the hidden horse in the woods surged forward catching another unit in the flank (sadly no picture). As expected Somerset was going to have a tough time. Just like the real battle ! 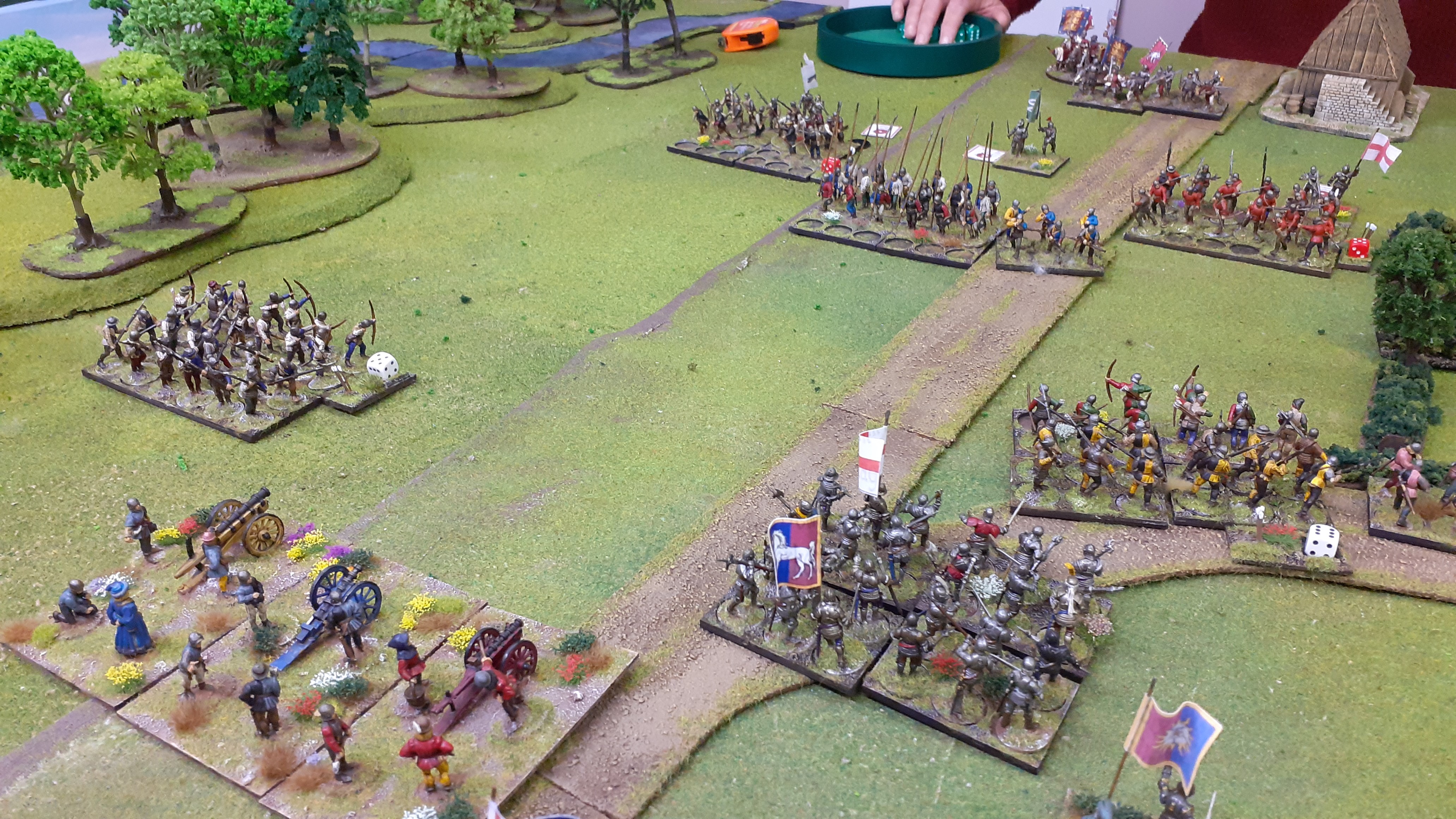 With the Lancastrian right under pressure Gloucester forced his men at arms forward. This combined unit of tin cans was going to take some stopping 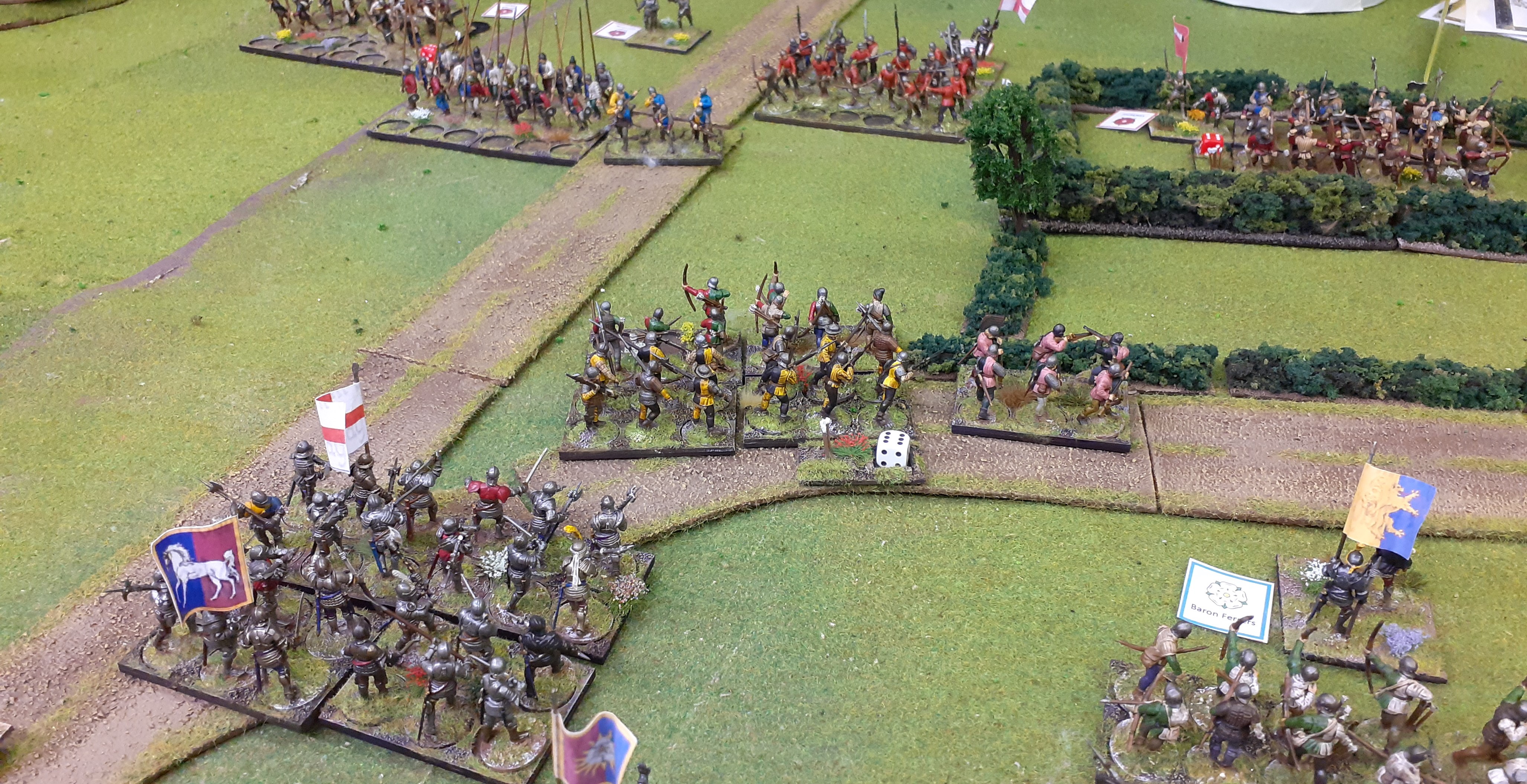 Back in the centre Wenlock was pushing forward to be met with a hail of Yorkist arrows.

Whilst Somerset and Wenlock were coming under serious fire The Earl of Devon was pushing forward. Somehow Mark F always manages to keep his troops in nicely drilled lines 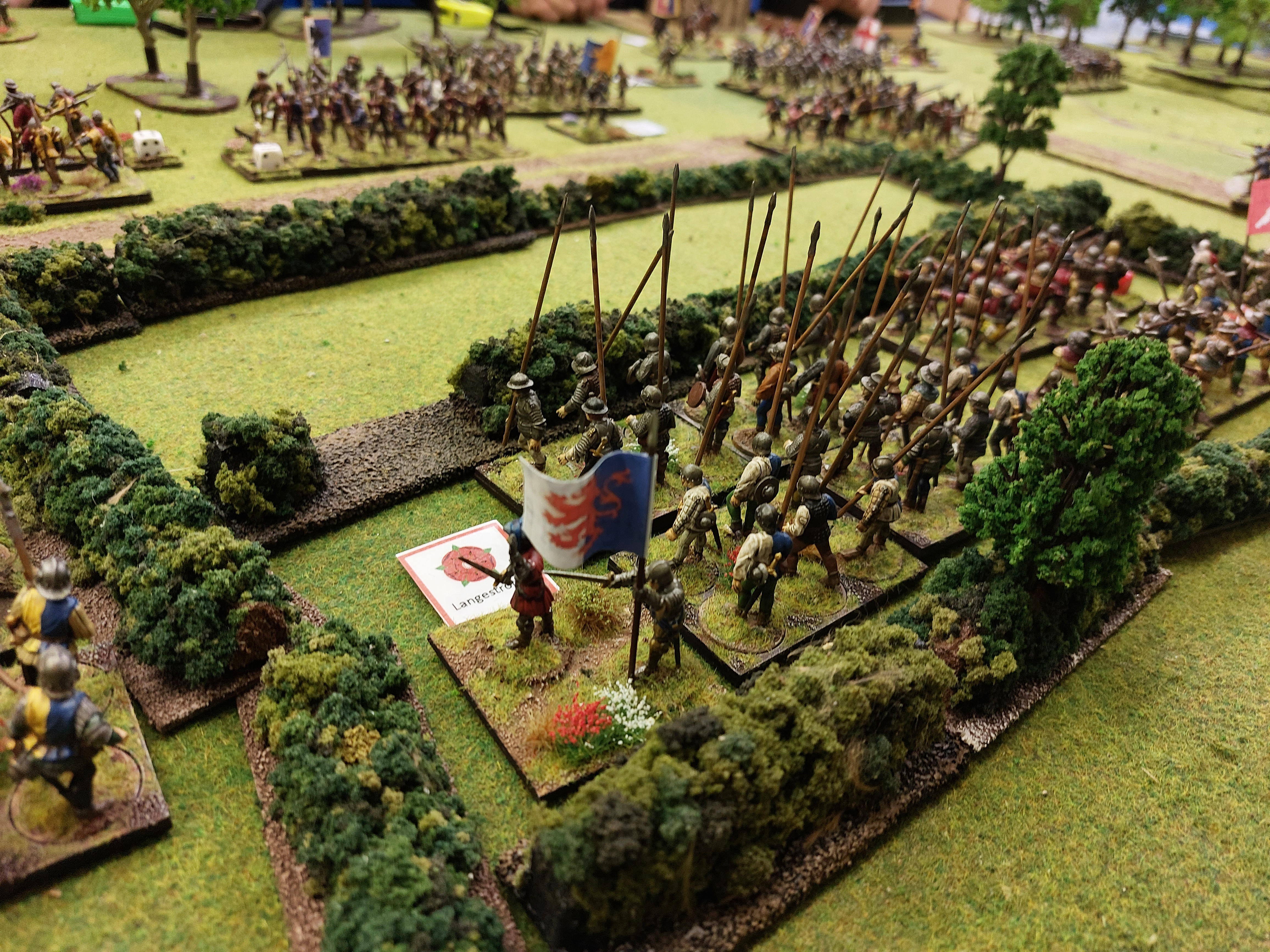 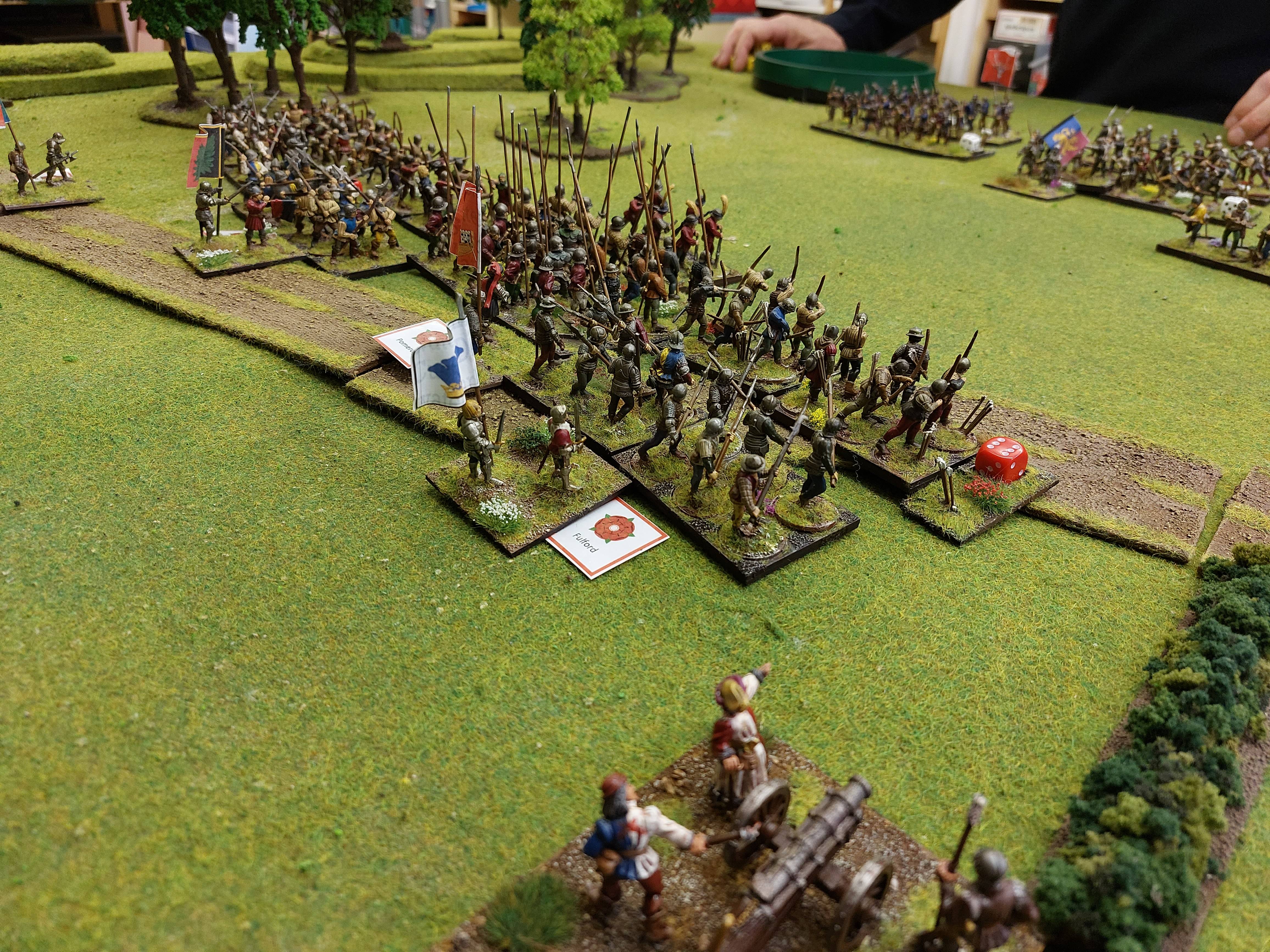 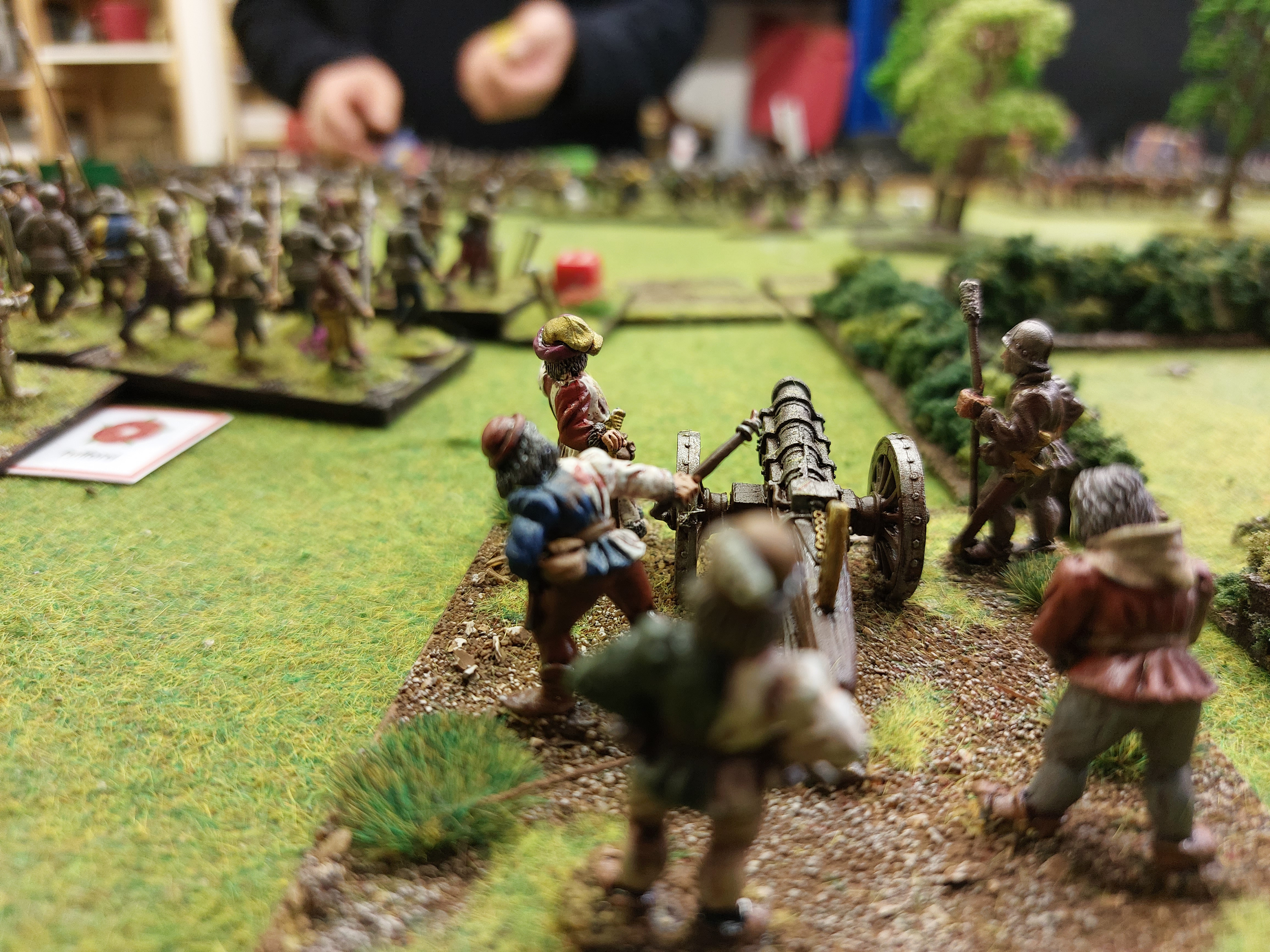 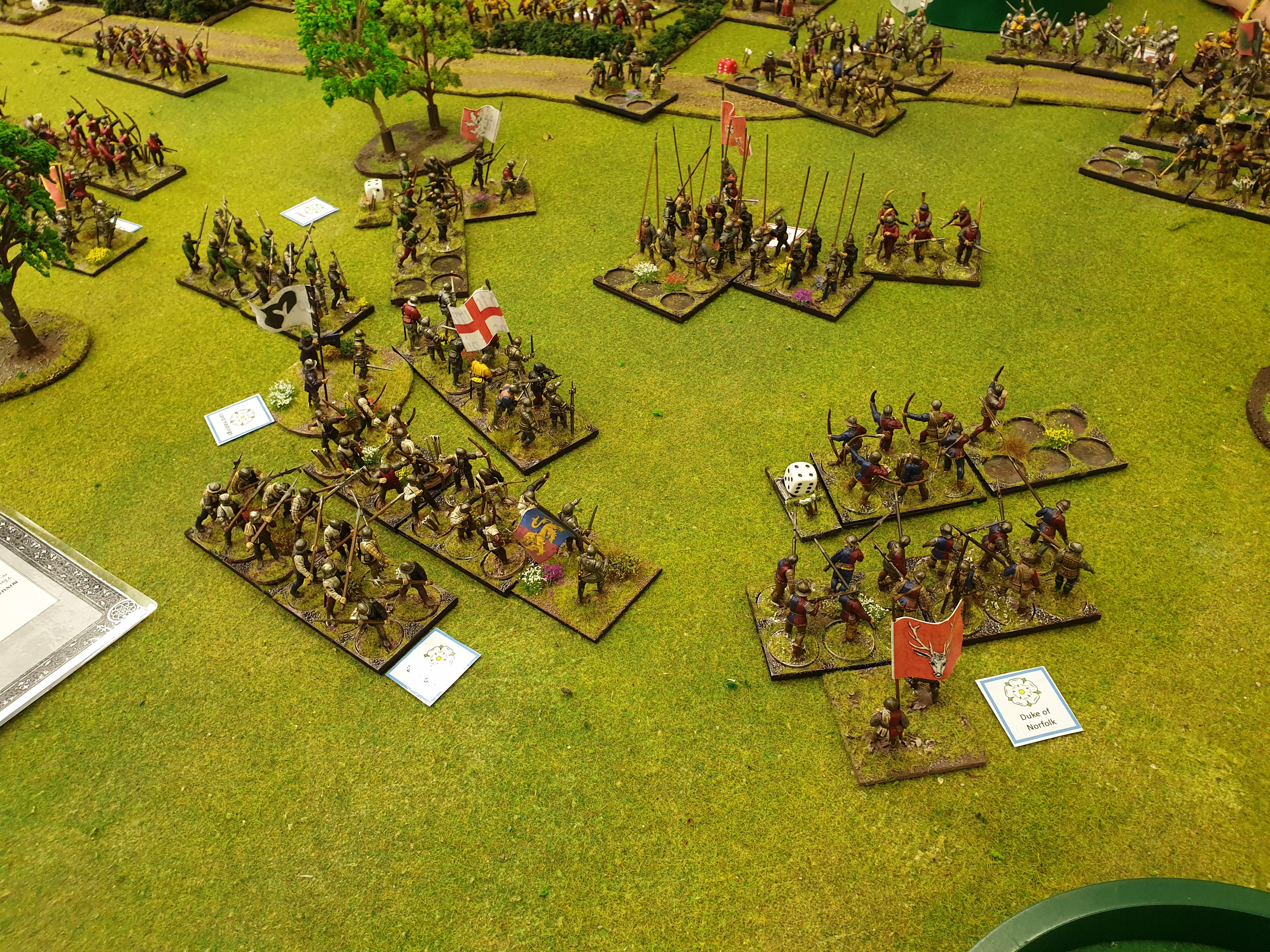 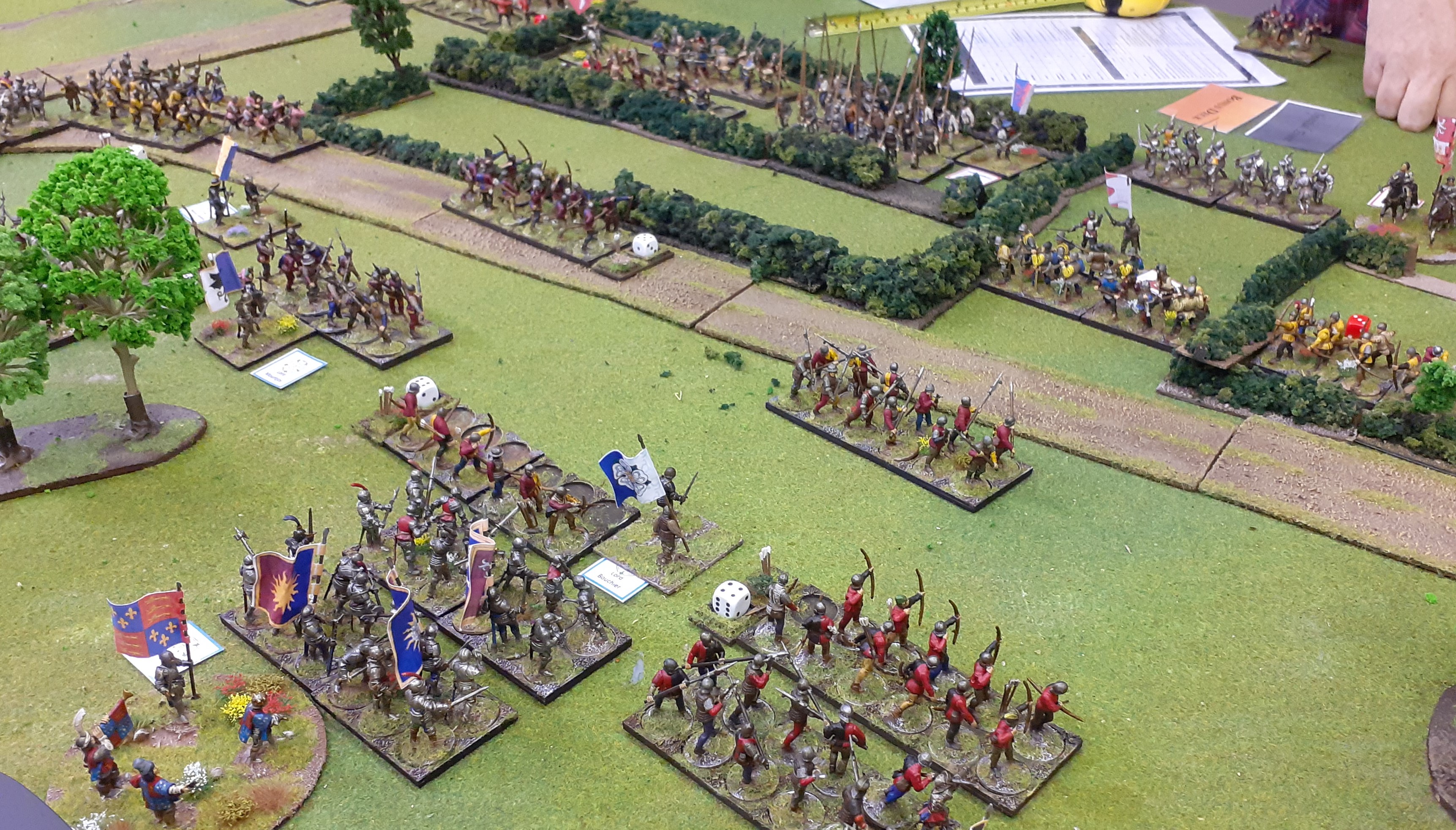 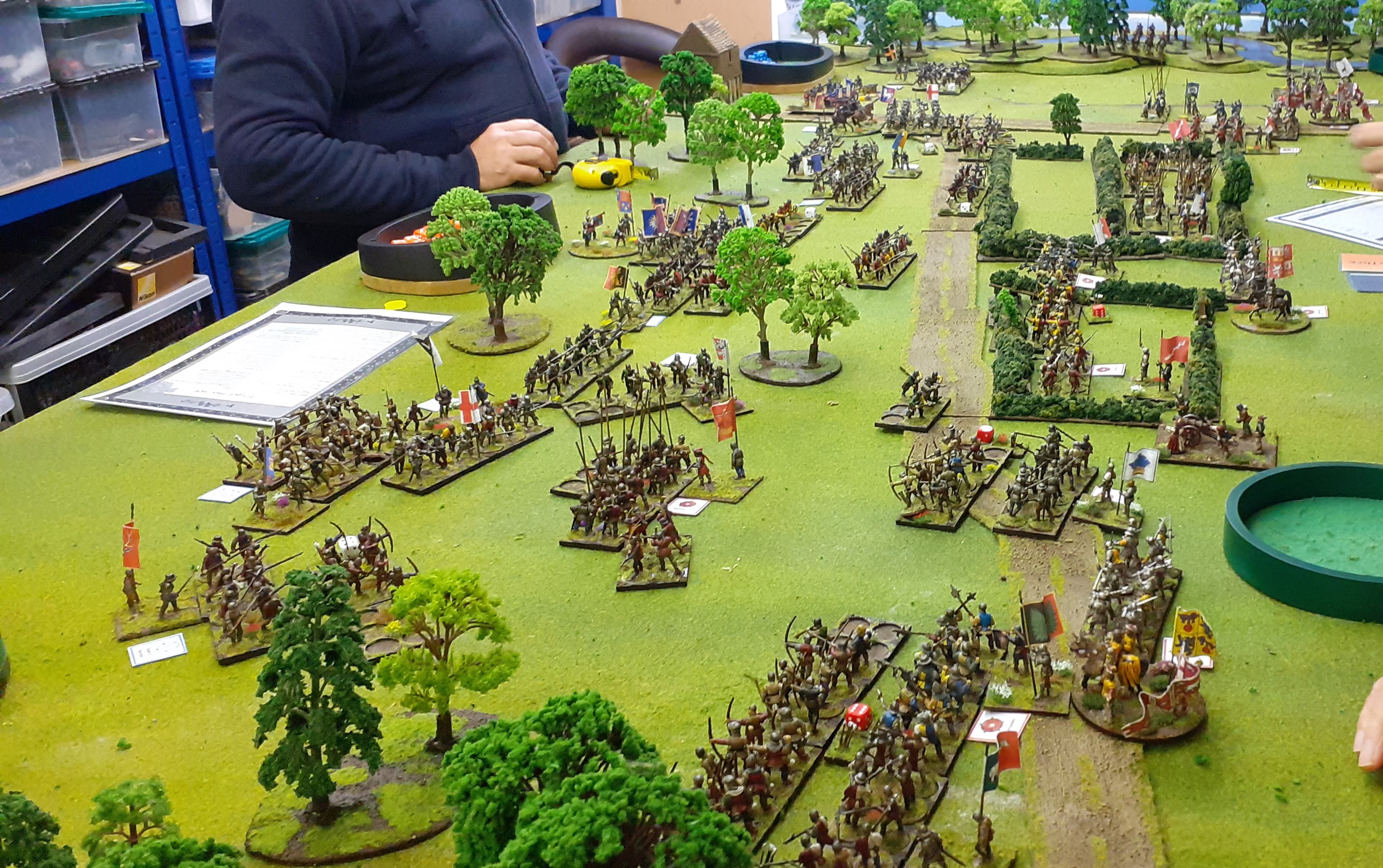 Devon finally manages to get his archers into play 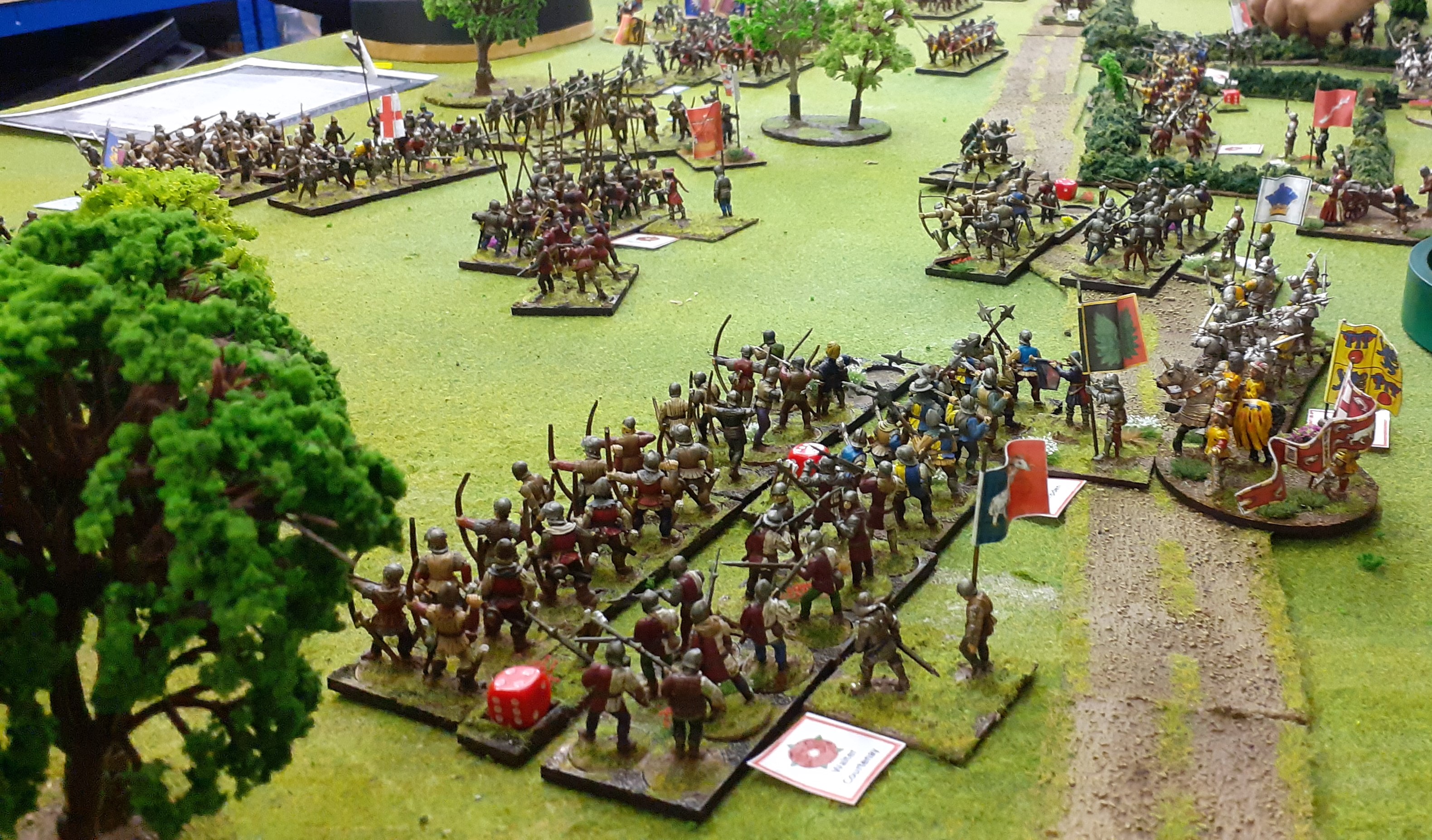 As the Lancastrian left was suffering Somerset, with few intact troops left, opted for a bold strategy. His personal retinue of men at arms charged the twice as large retinue of Gloucester. 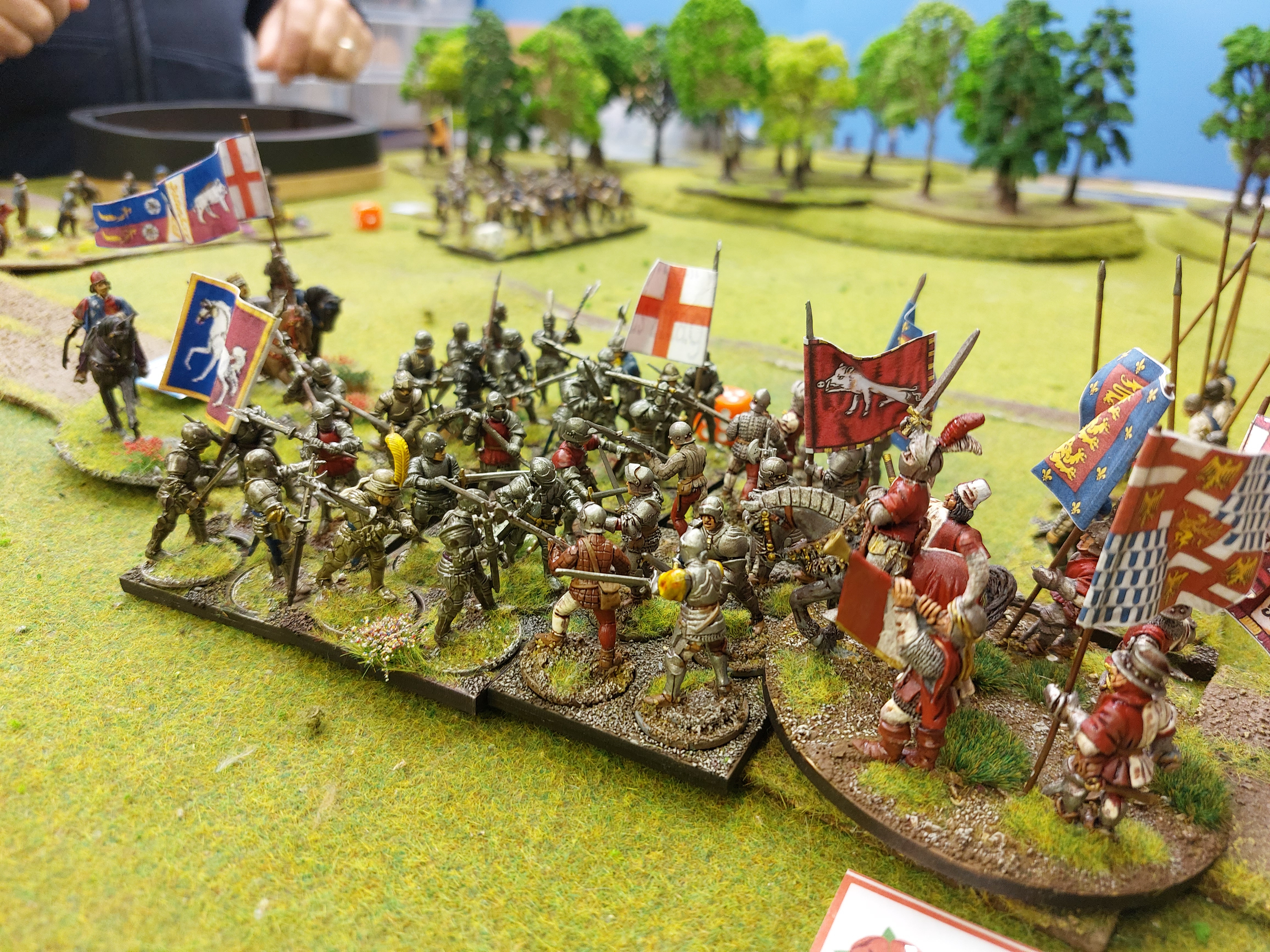 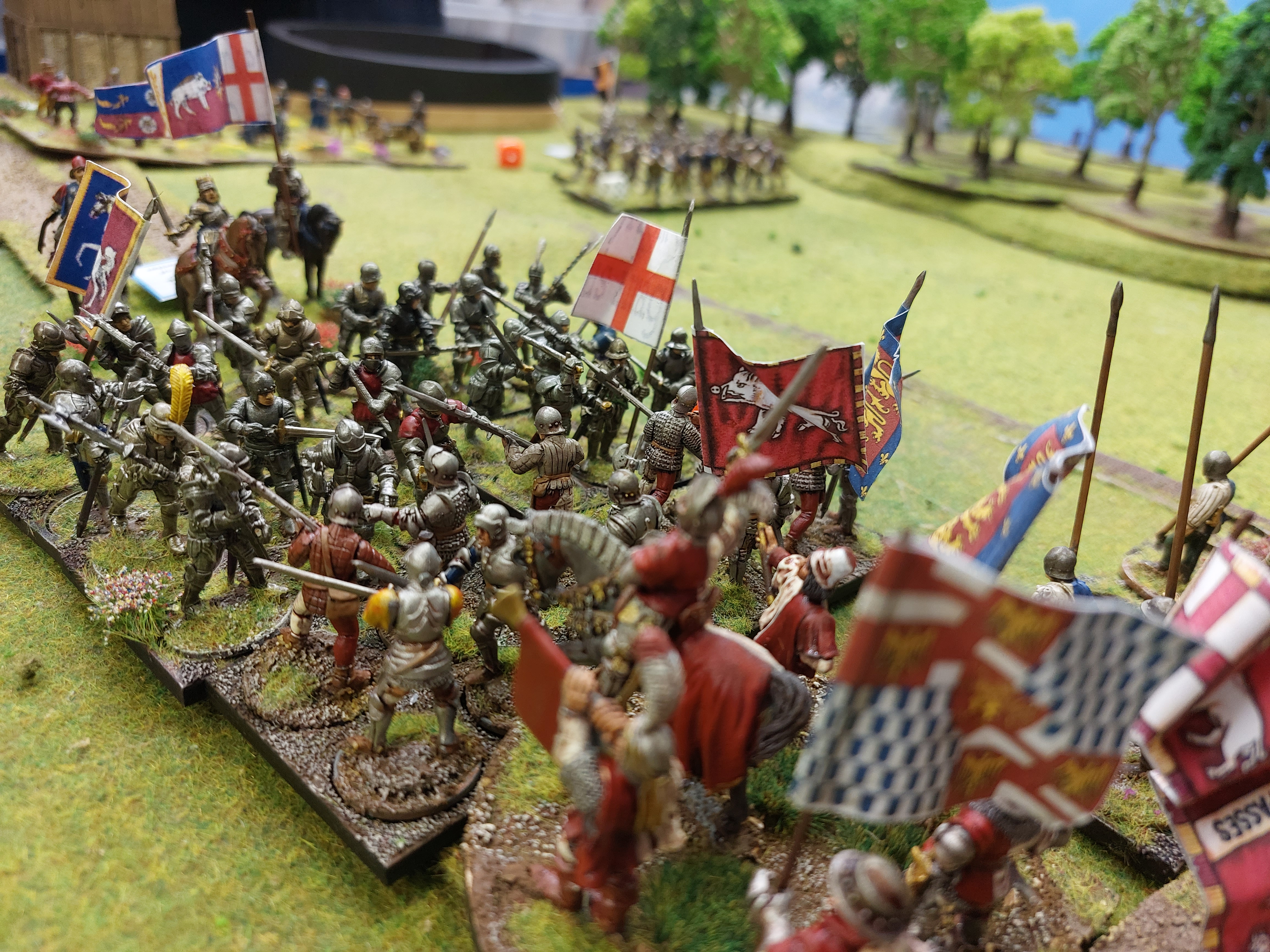 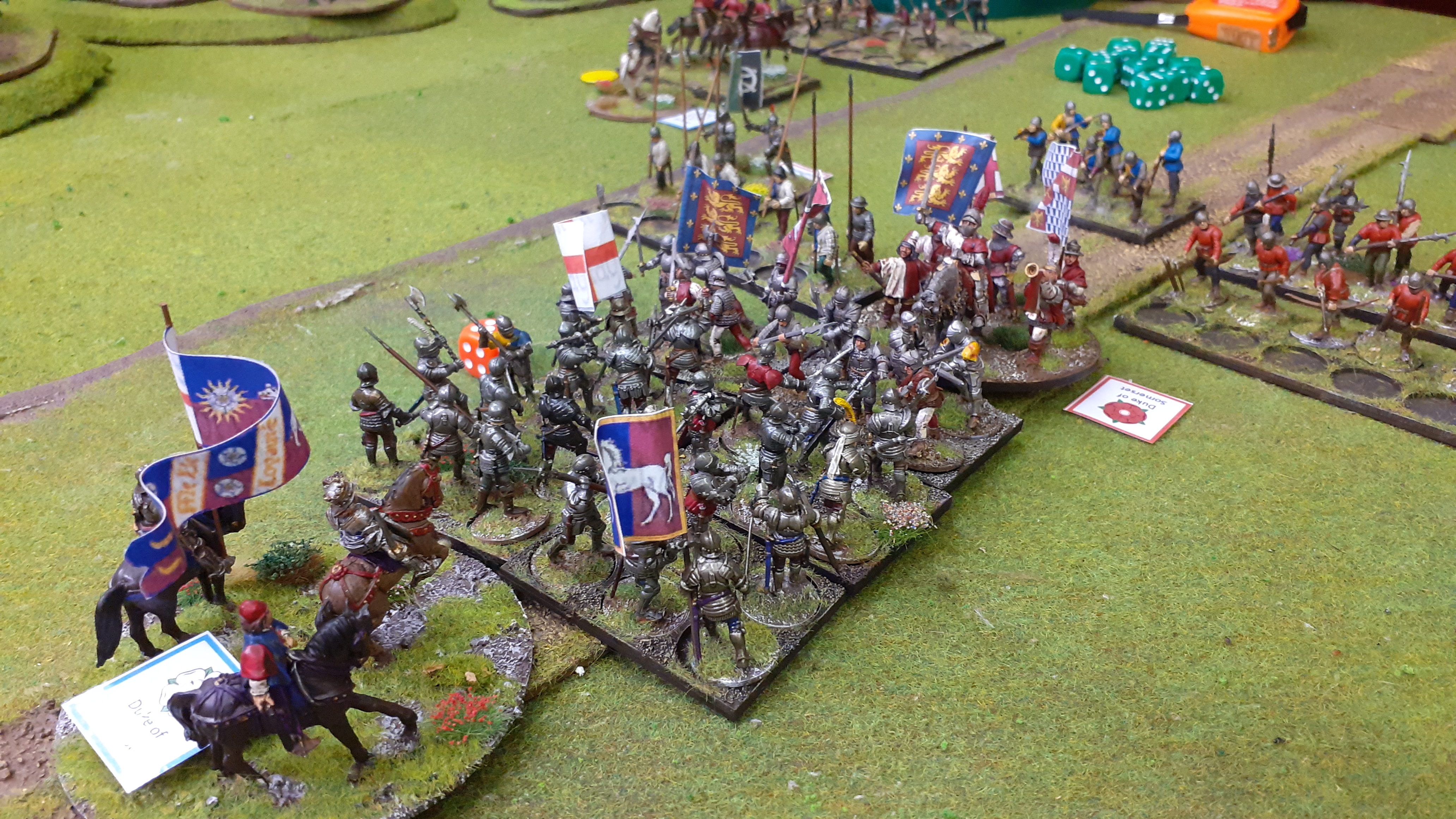 Meanwhilst back in the centre the mercenary pikes forced there way through the hedgerow and confronted the Yorkist archers. Stiff resistance was offered 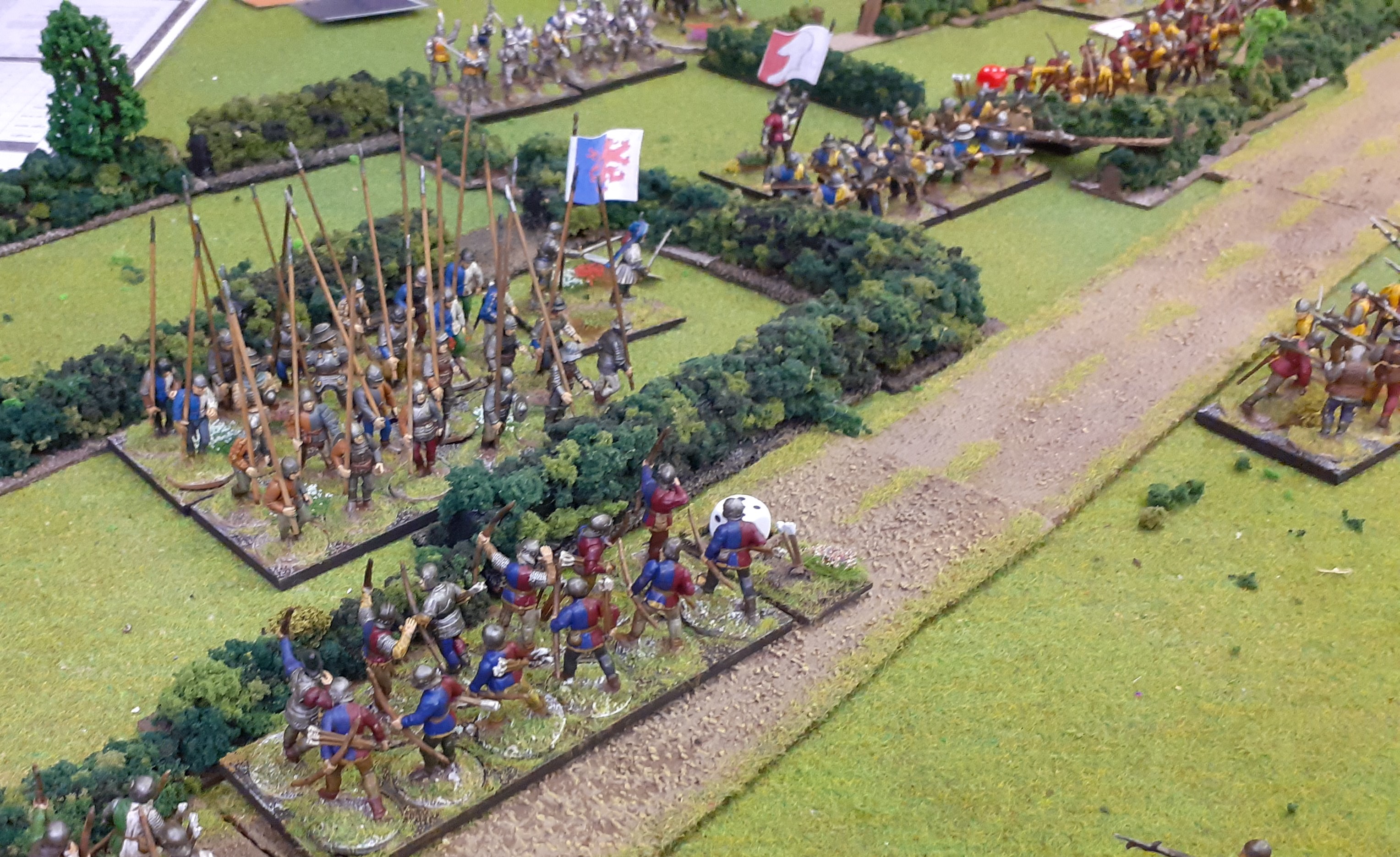 With a few remnants of the Lancastrian right stll loitering the artillery opened up again. One gun exploded in a shroud of fire and smoke, the other two continued to ploy their gruesome work. 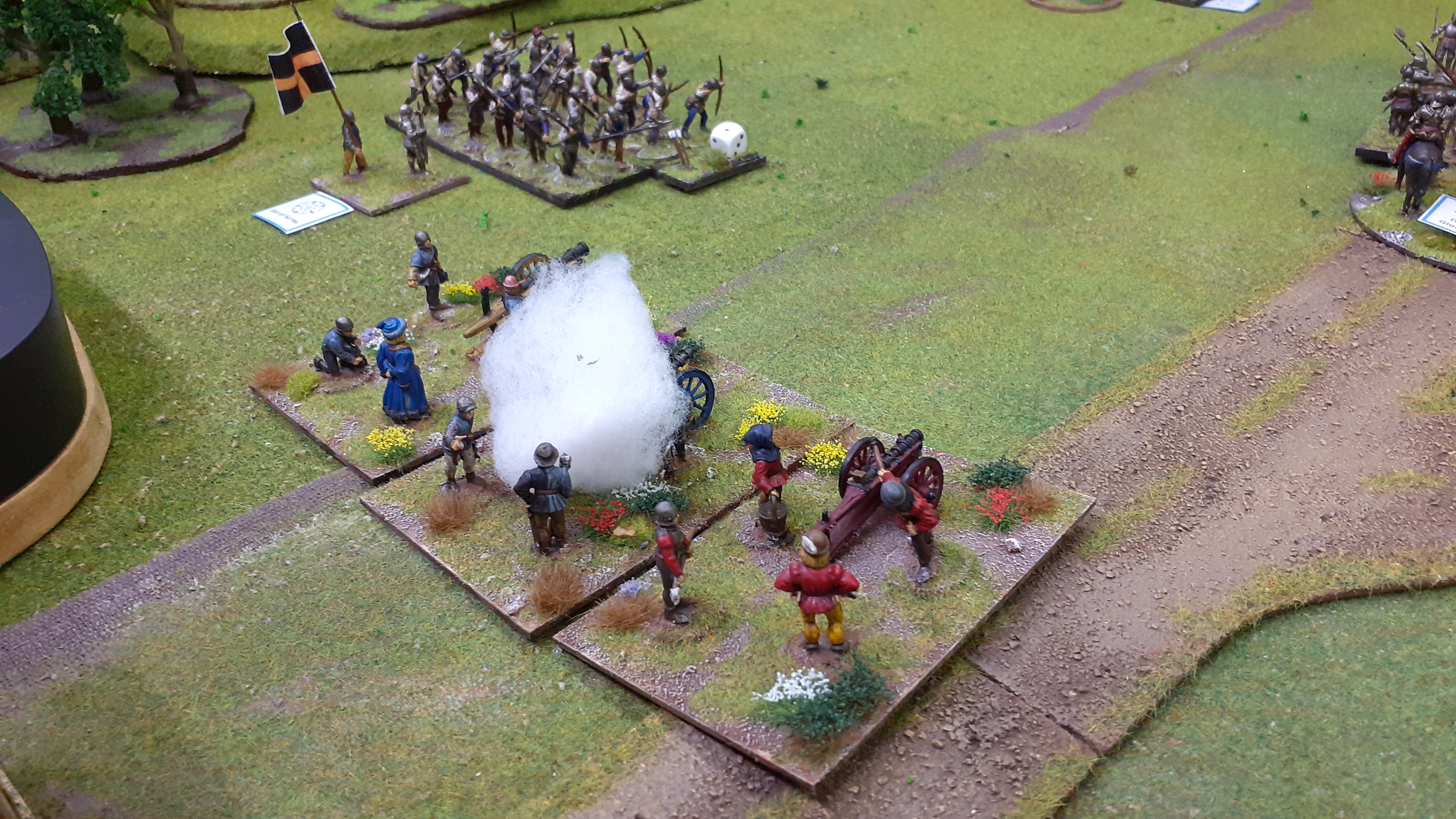 Fearing the battle was being lost in front of his eyes Lord Wenlock threw his own retinue into the fight. Forcing their way up through the 'evil lanes' a bill unit was swiftly dealt with. 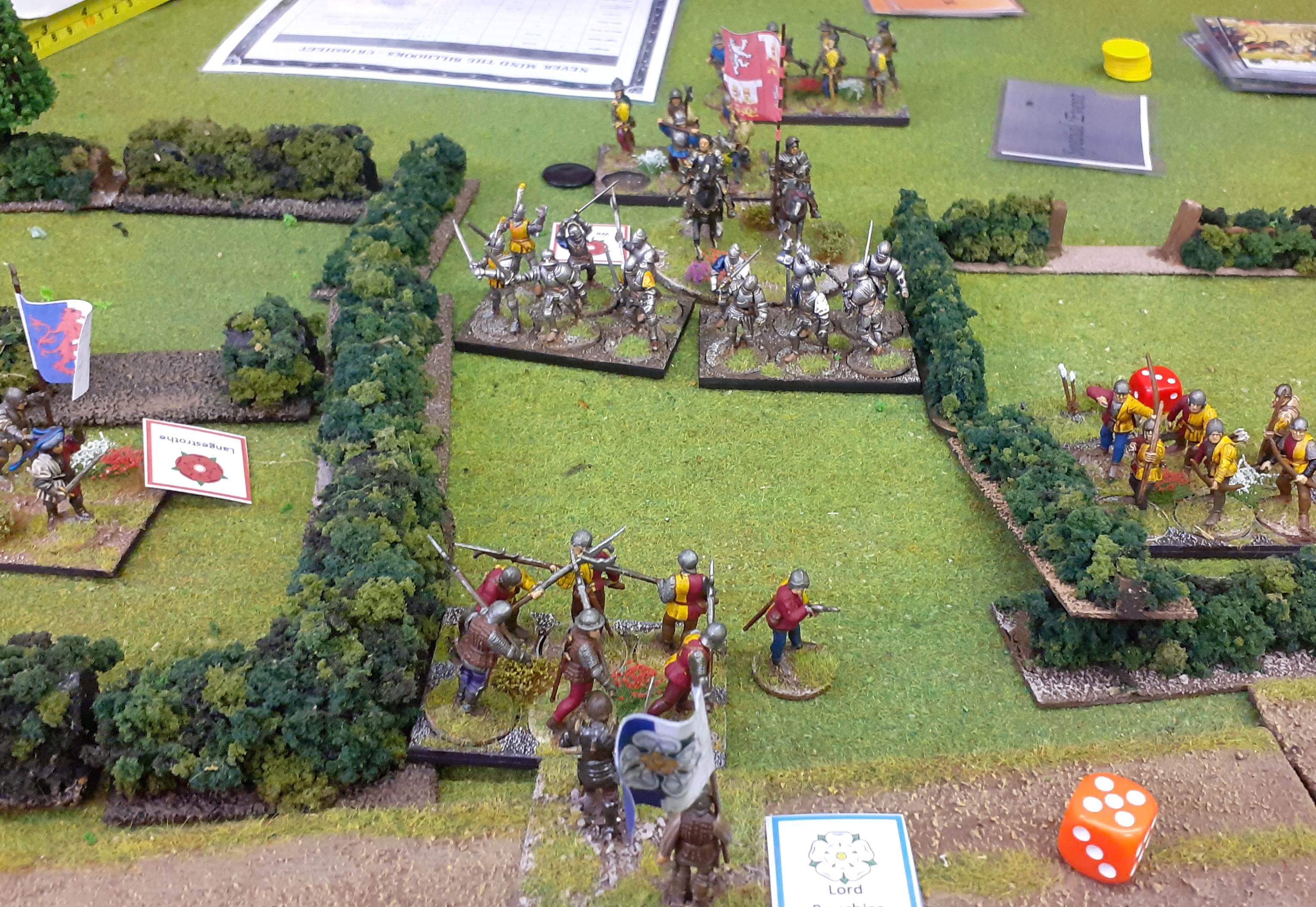 Somerset's victorious remnant watch the numerically superior forces of Gloucester continue their retreat. Two units removed from the Yorkist flank. We will forgive Vince as this was his first game of NMTBH but he will learn that splitting combined units is less expensive in the long run. 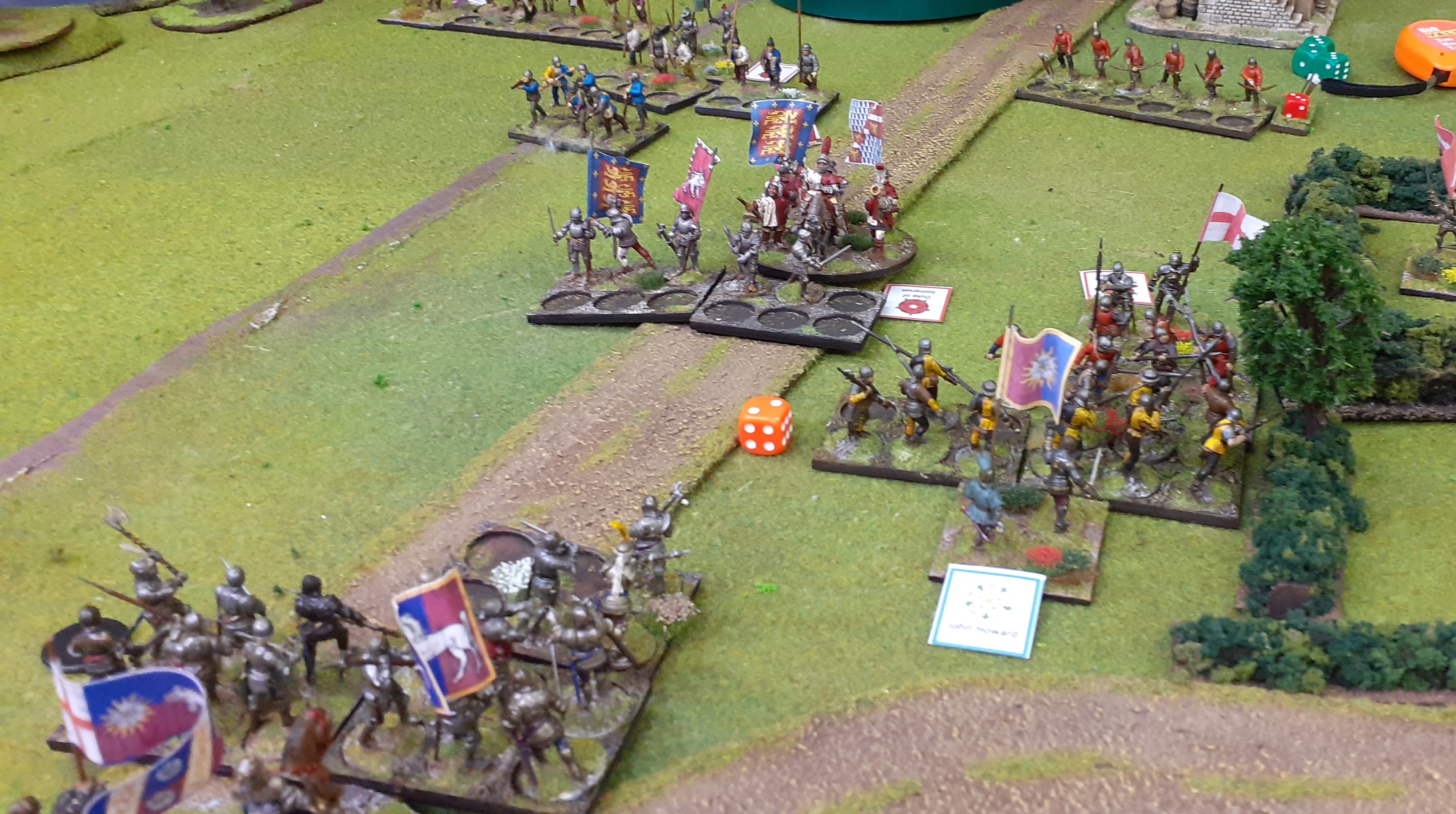 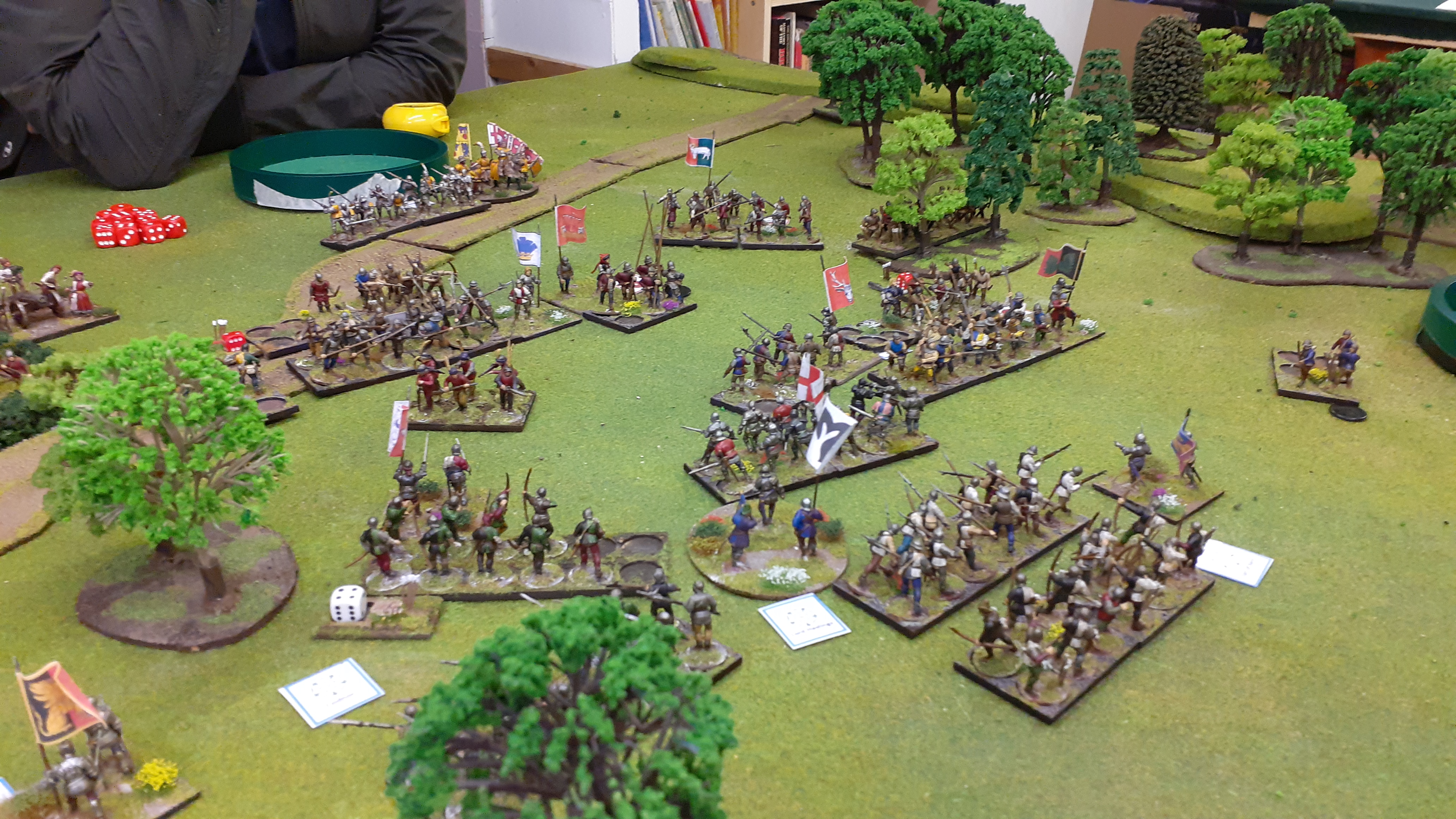 By now Wenlock had reached the end of the lanes and was facing down KIng Edward's retinue or a unit of bills.
He launched his assault against the weaker of the two 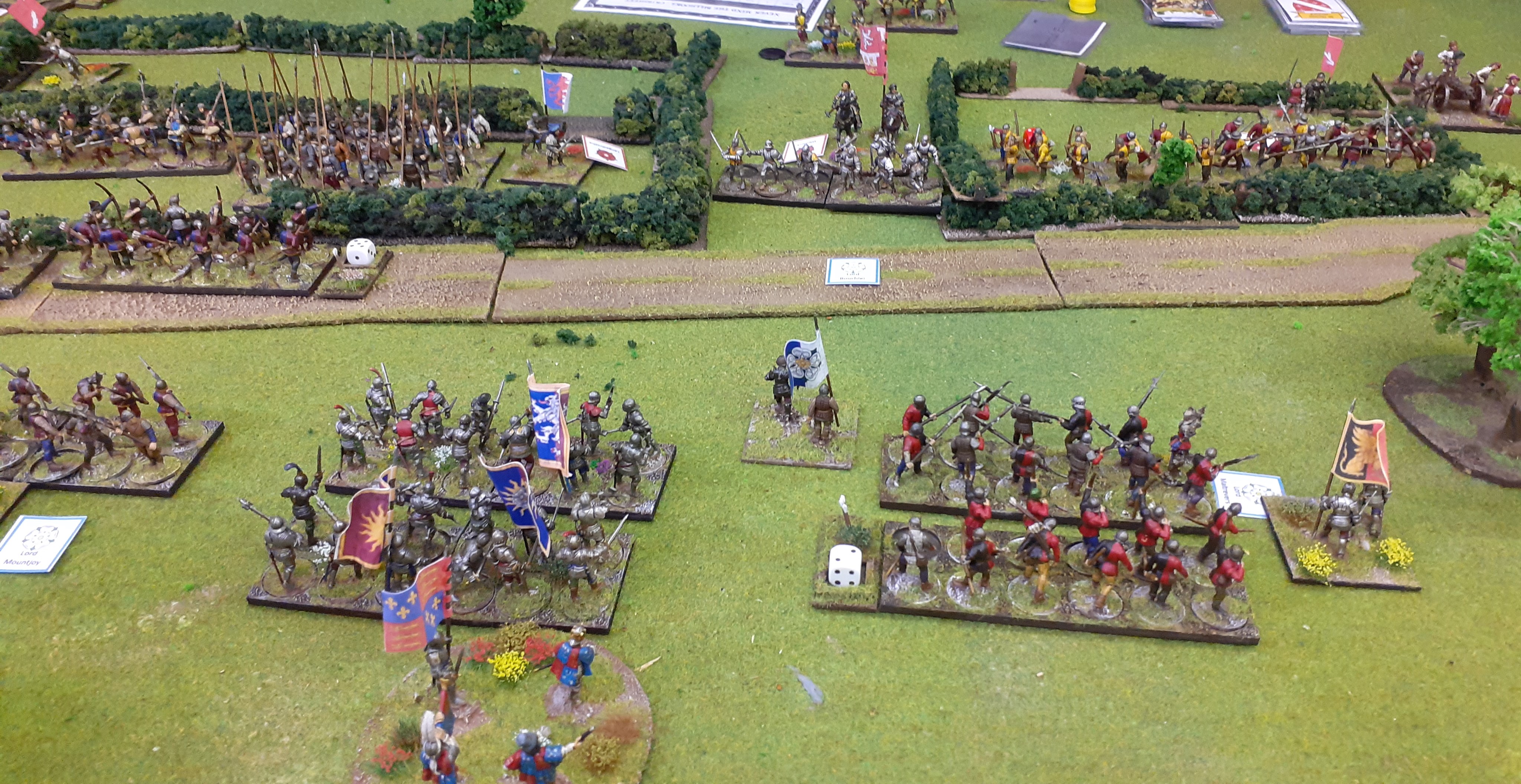 Wenlock removed the bills and faced down a unit of archers. 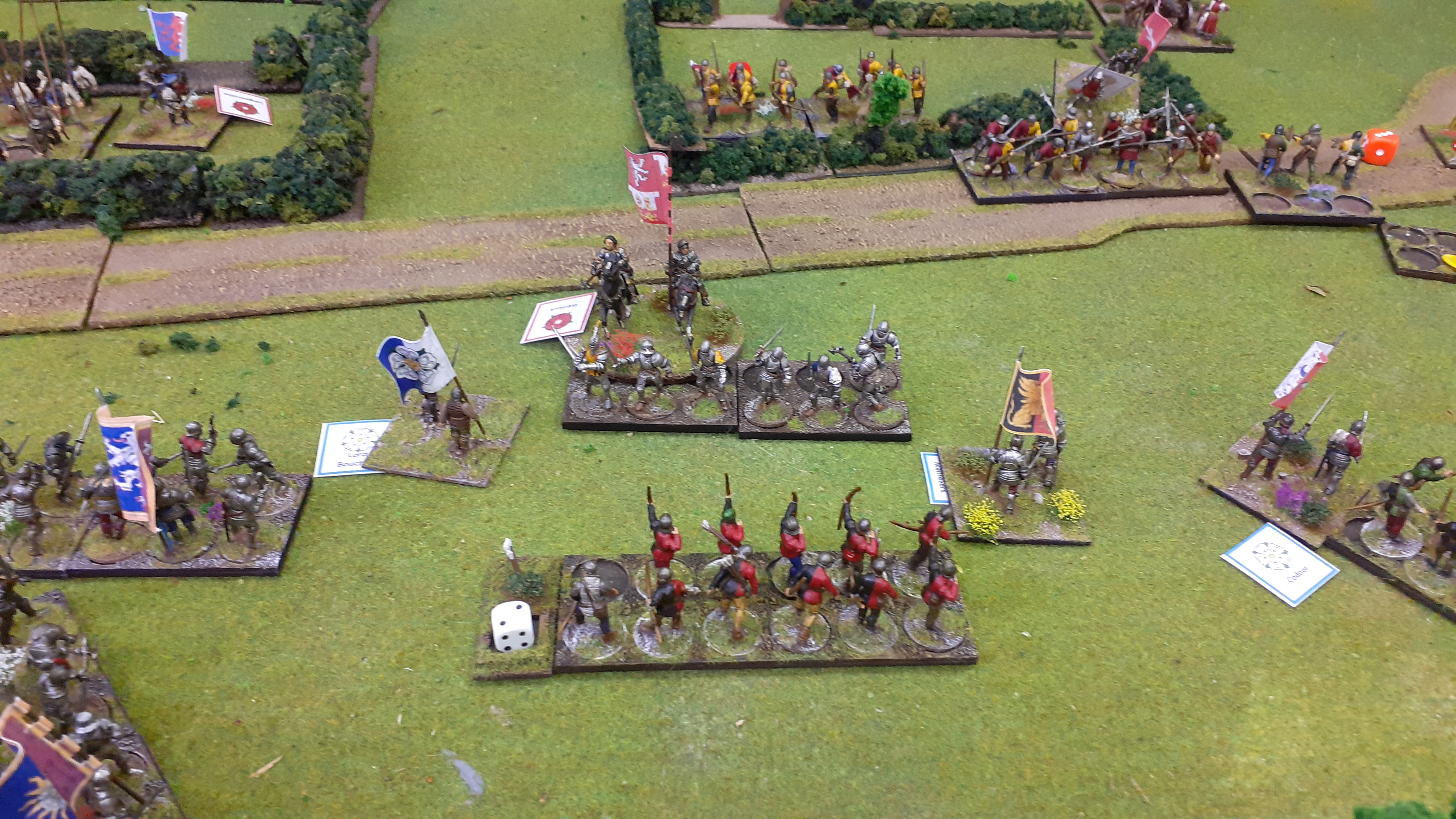 Kind Edward (Me) might have timed this wrong I just couldn't get my troops into action. 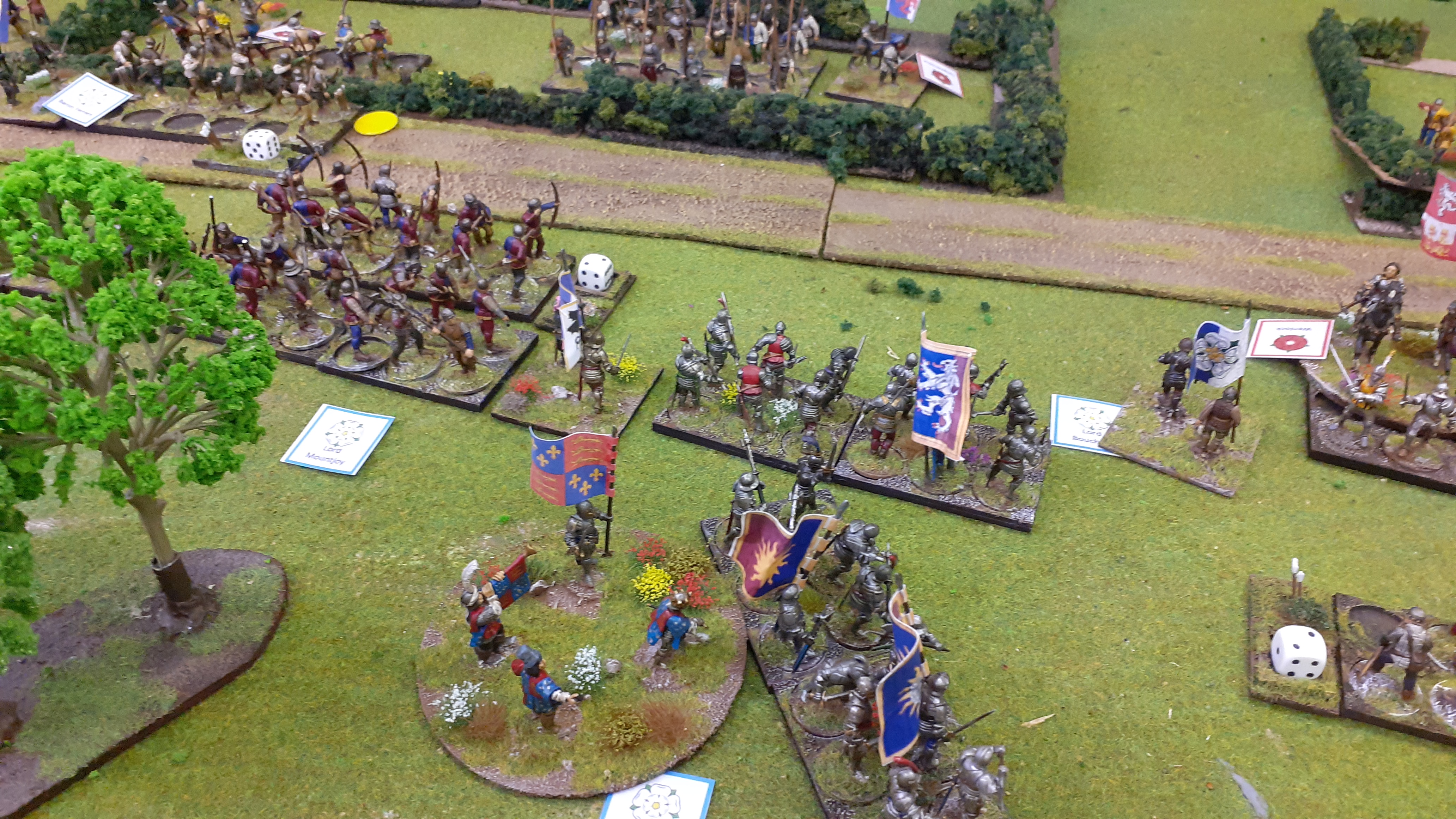 As the clock marched to 10.30pm - the end of the game was called and the morale token totalled...

The Lancastrian right wing had all but disappeared..... 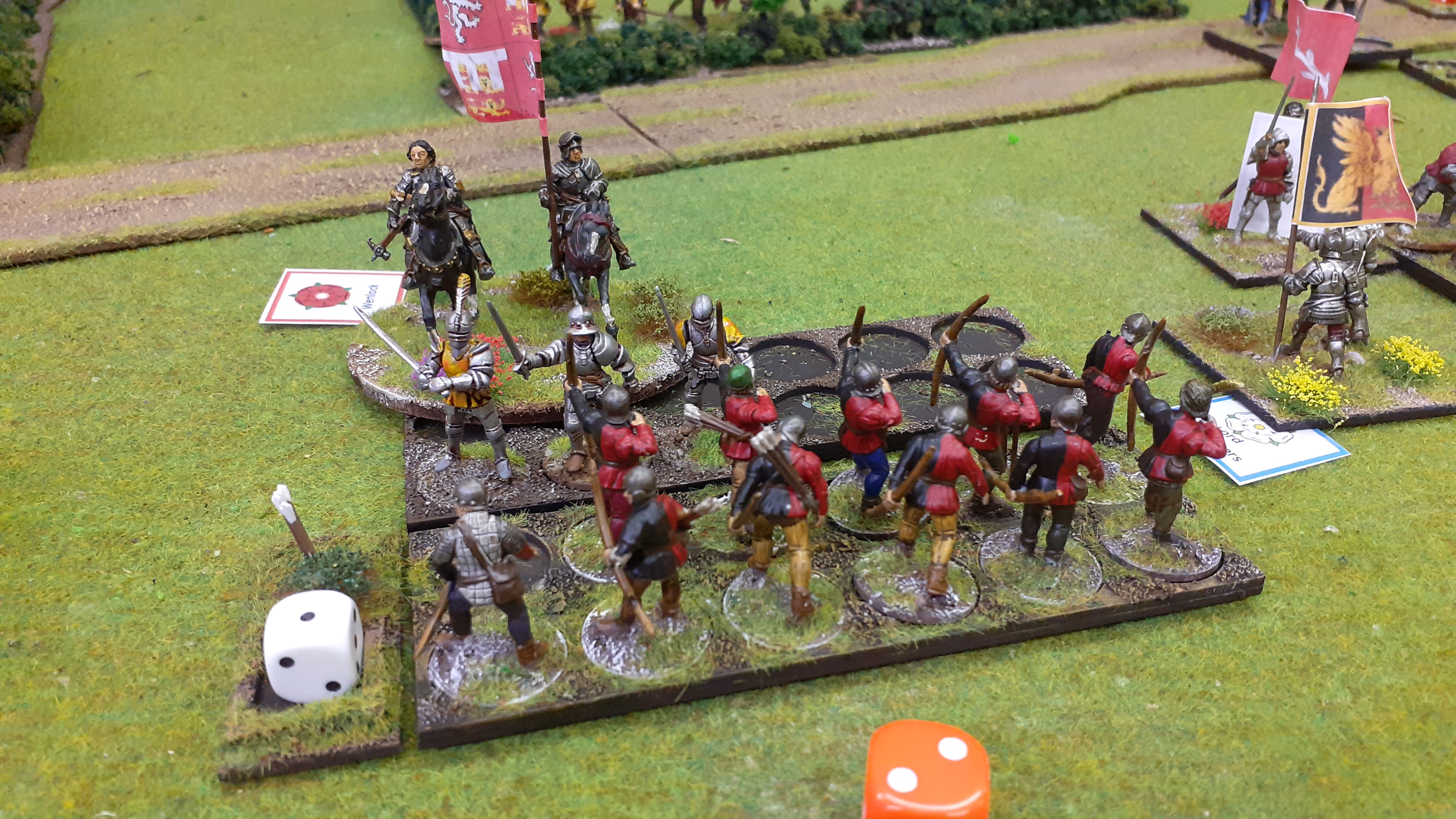 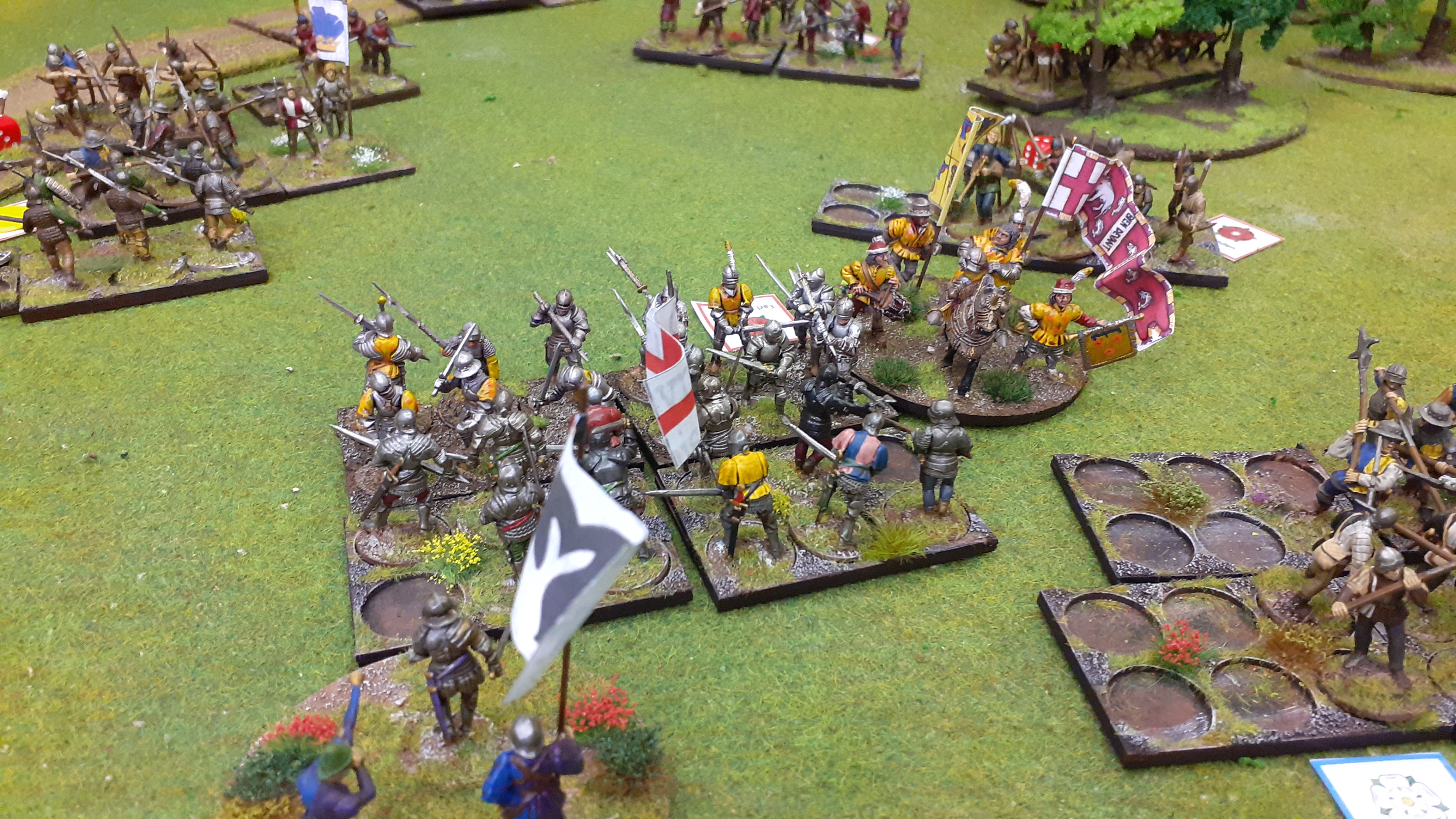 and Devon and Hastings were battling it out....
The token count was even - we declared a draw.
Posted by Eric the Shed at 13:29