Its the day after our epic refight of Barnet and I am still reeling from what happened last night - a victory was won in the chaos of the fog. The general concensus amongst the players was that it was a great game full of nerve wracking moments, crucial die rolls and a bit of treachery thrown in. Who won? read on....

Our game was set up for three players aside with Mark F, Alastair and Tony commanding the Lancastrians. John, Mark K and myself would lead the Yorkists into action and using host's prerogative I elected to play King Edward. Having snatched victory from the jaws of defeat at our refight of Towton could Edward repeat the action?

The game started with thick fog covering the table this would limit movement, shooting and command ranges. To mitigate for the weather most units elected to start as combined units with their leaders attached. 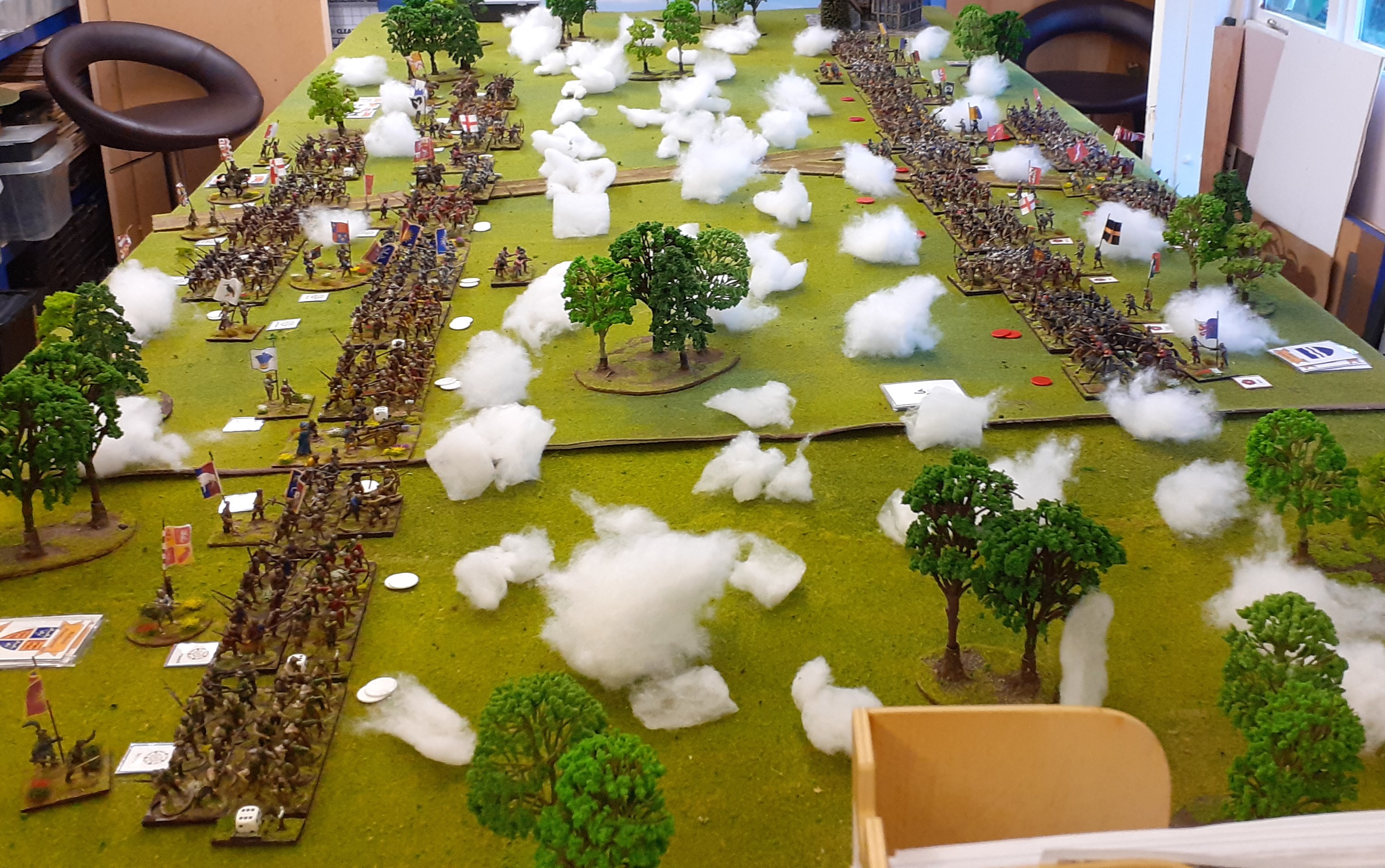 We elected to avoid the maneuver phase and started with the cards straight away. The first card drawn being the Lancastrian artillery. All three batteries opened fire and despite this being indirect all three found targets. One battery commanded by Oxford knocked out 4 men at arms in Hastings battle in the first shot...ouch ! 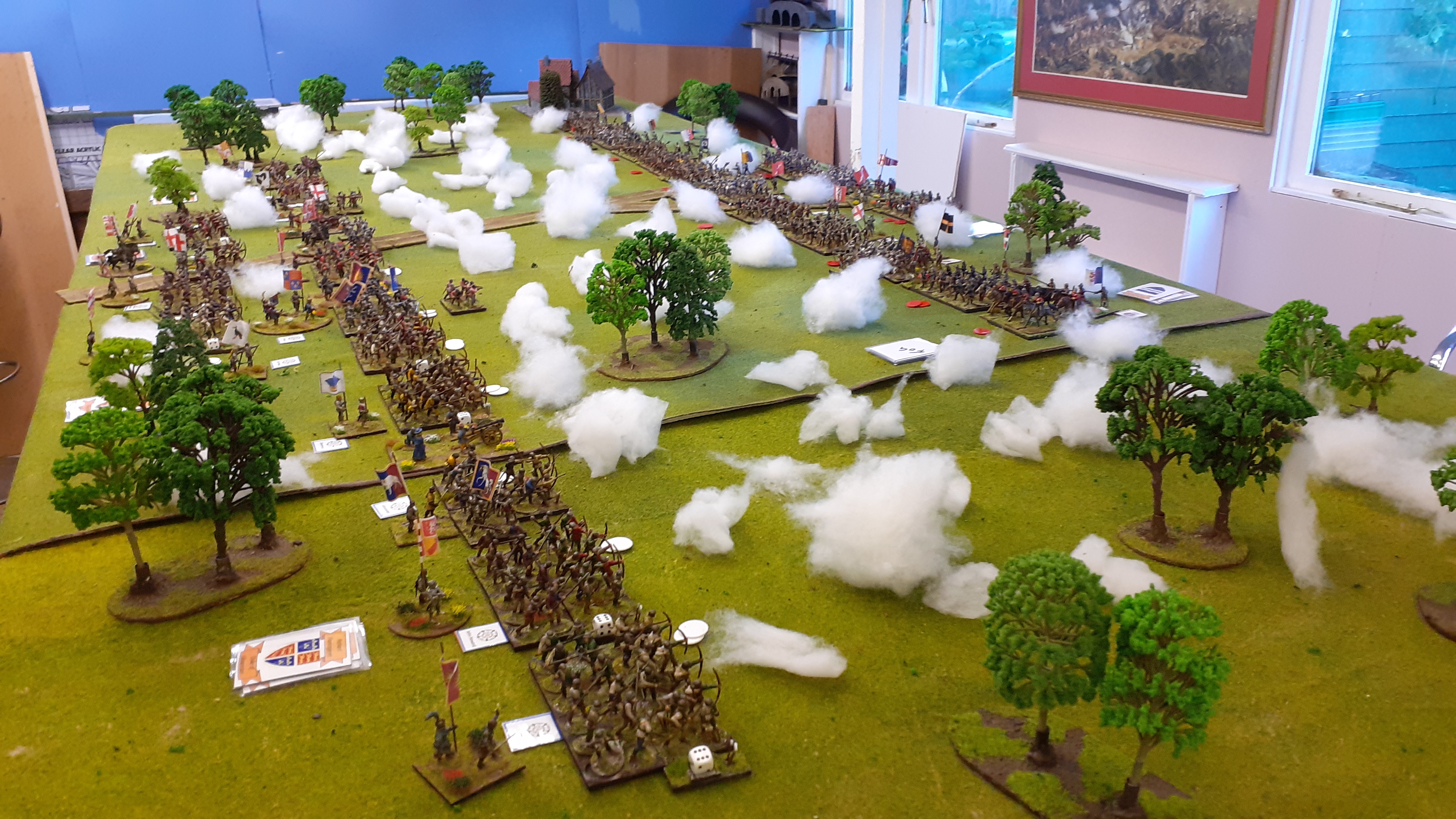 Both armies then started to edge forward into the swirling mist
We used kapok (cushion stuffing to reflect the mist - an idea stolen from a fellow blogger but cannot remember who...apologies 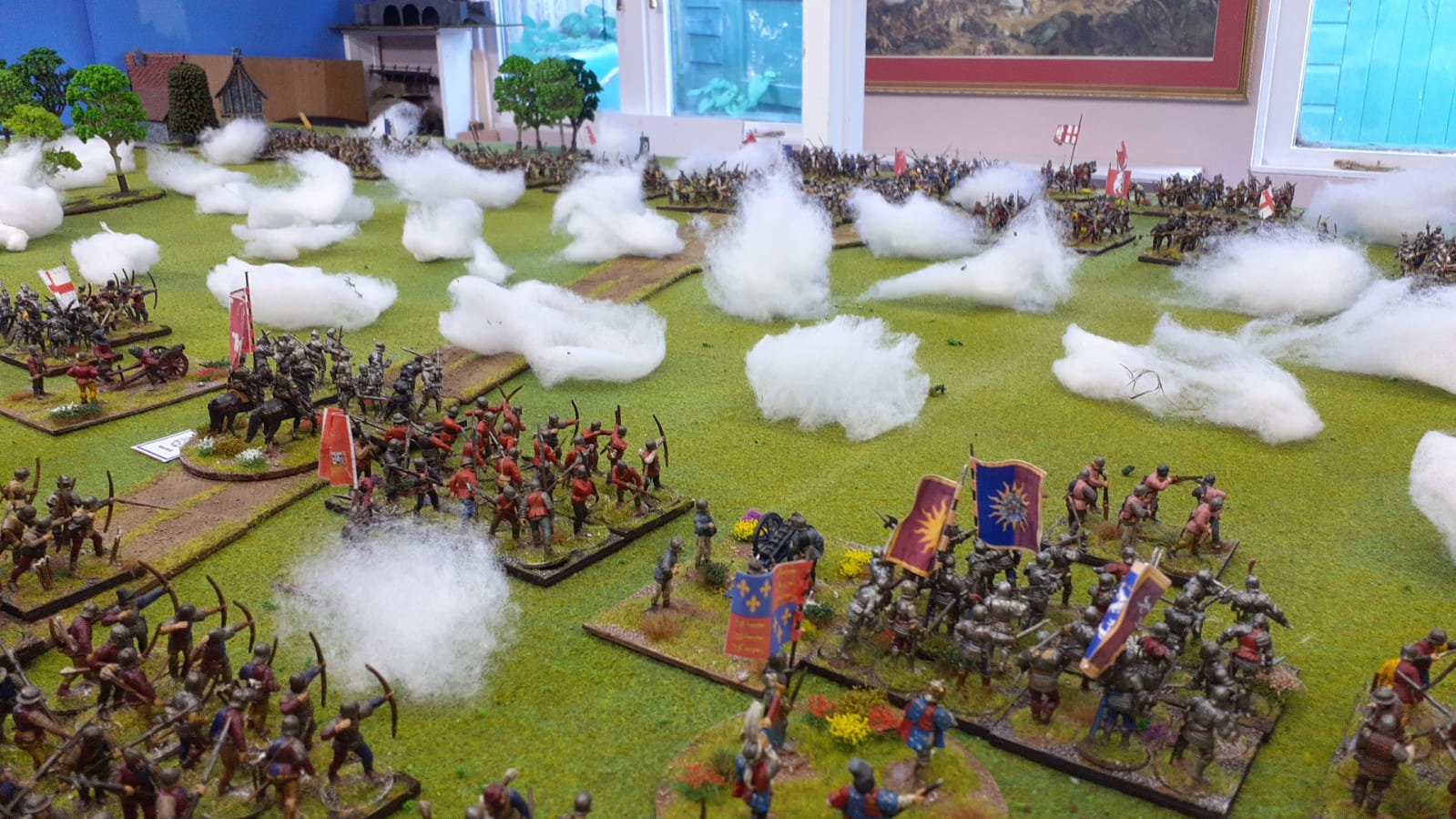 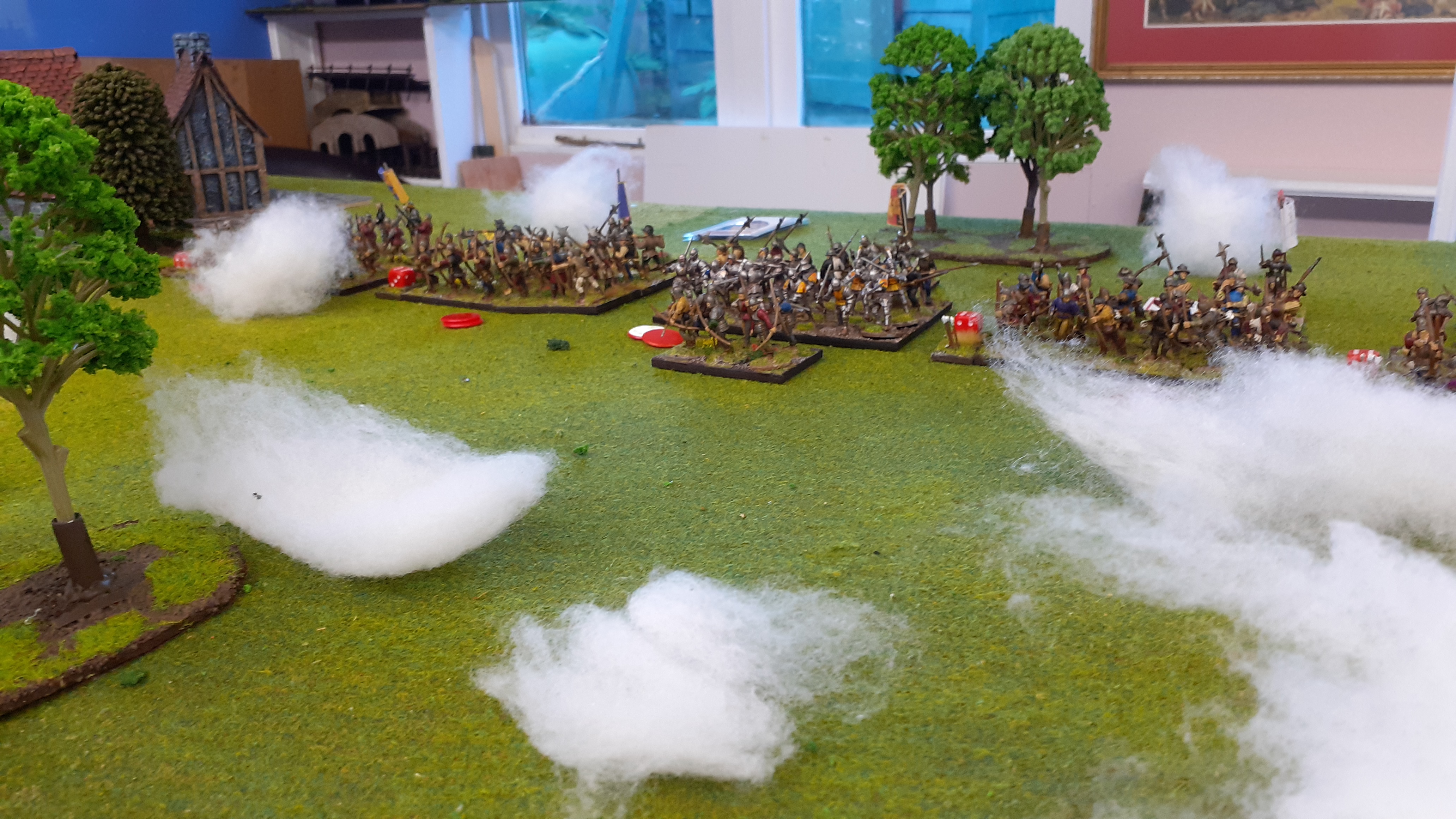 Slowly the armies started to get close to one another... 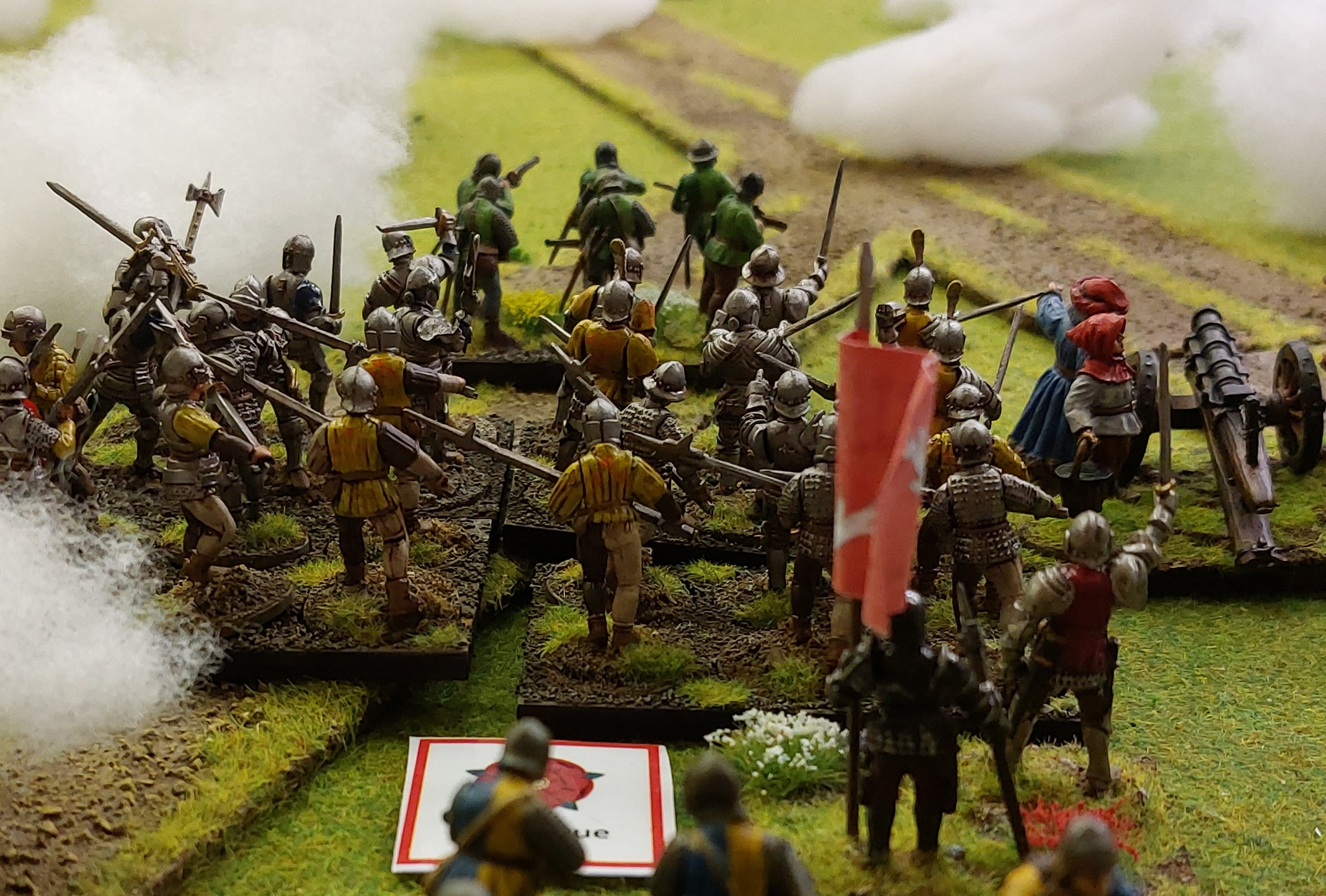 The dense fog was playing havoc with missile fire - more often than not volleys of arrows completely missed their targets. This battle was going to be decided by mace, poleaxe and bill. 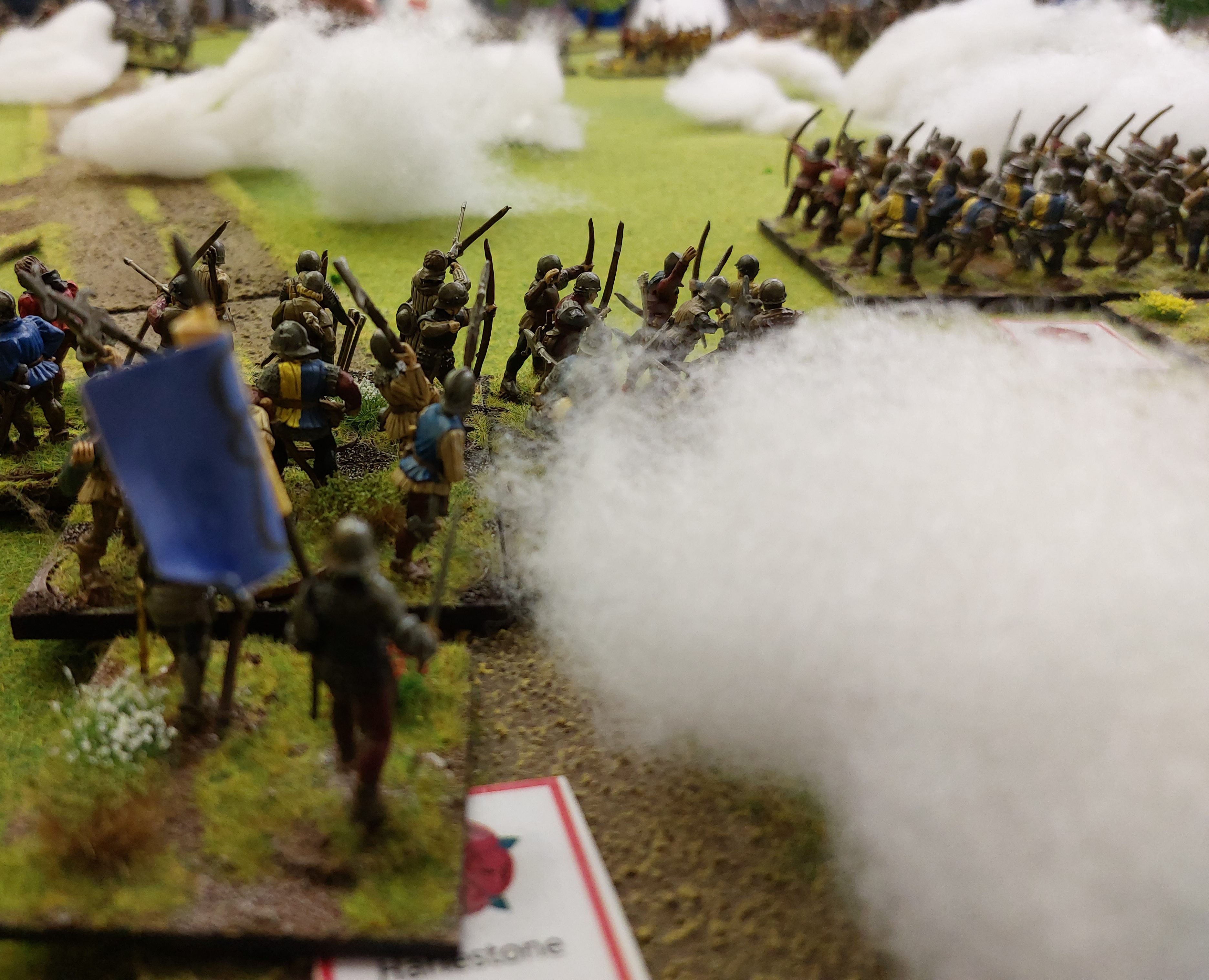 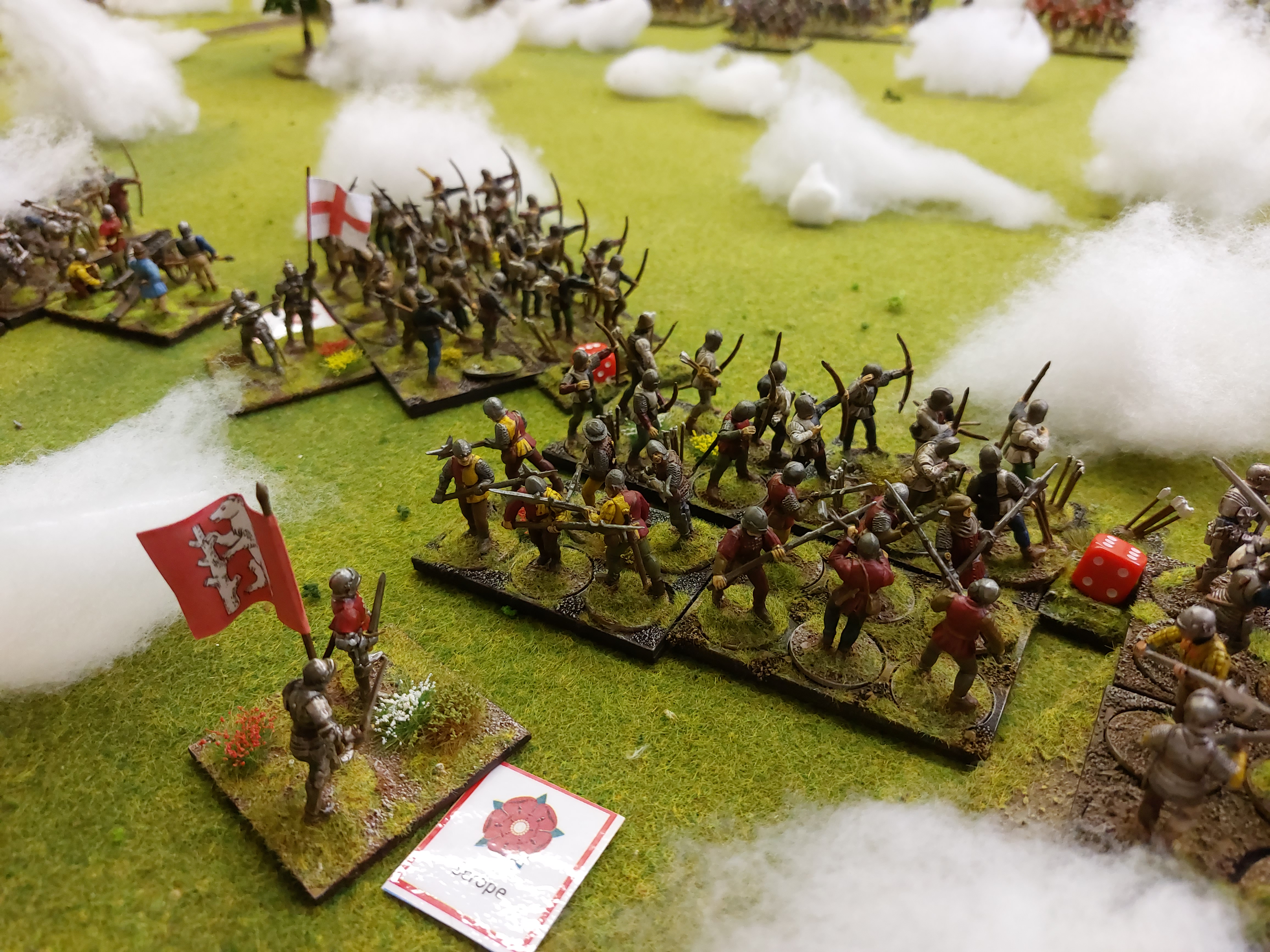 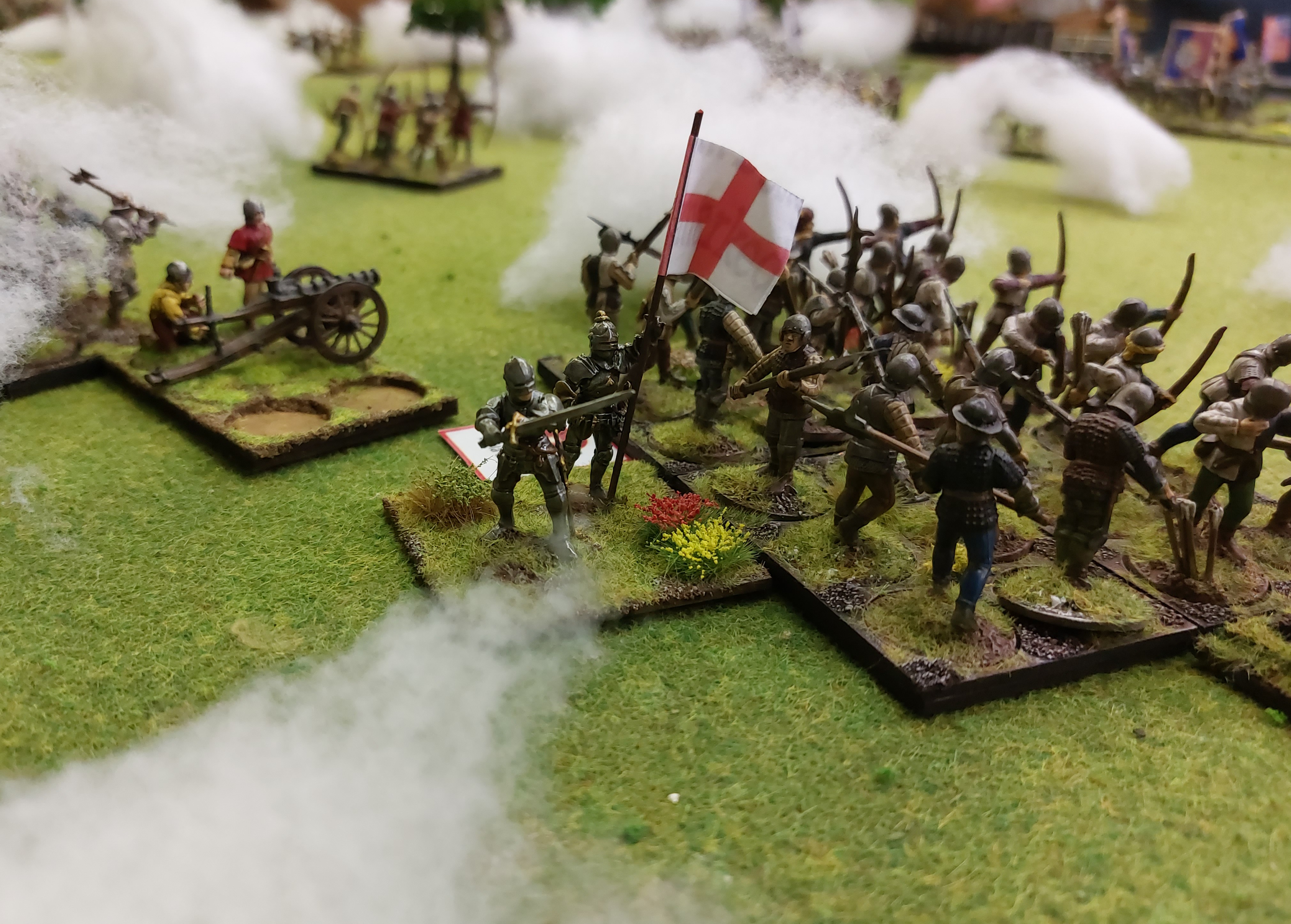 A bulge of opposing forces was beginning to appear in the centre as both units attempted to get the upper hand.

Mean whilst Gloucester's reserves decided to take a route off to the far right (got lost in the fog) almost marching them off the battlefield. 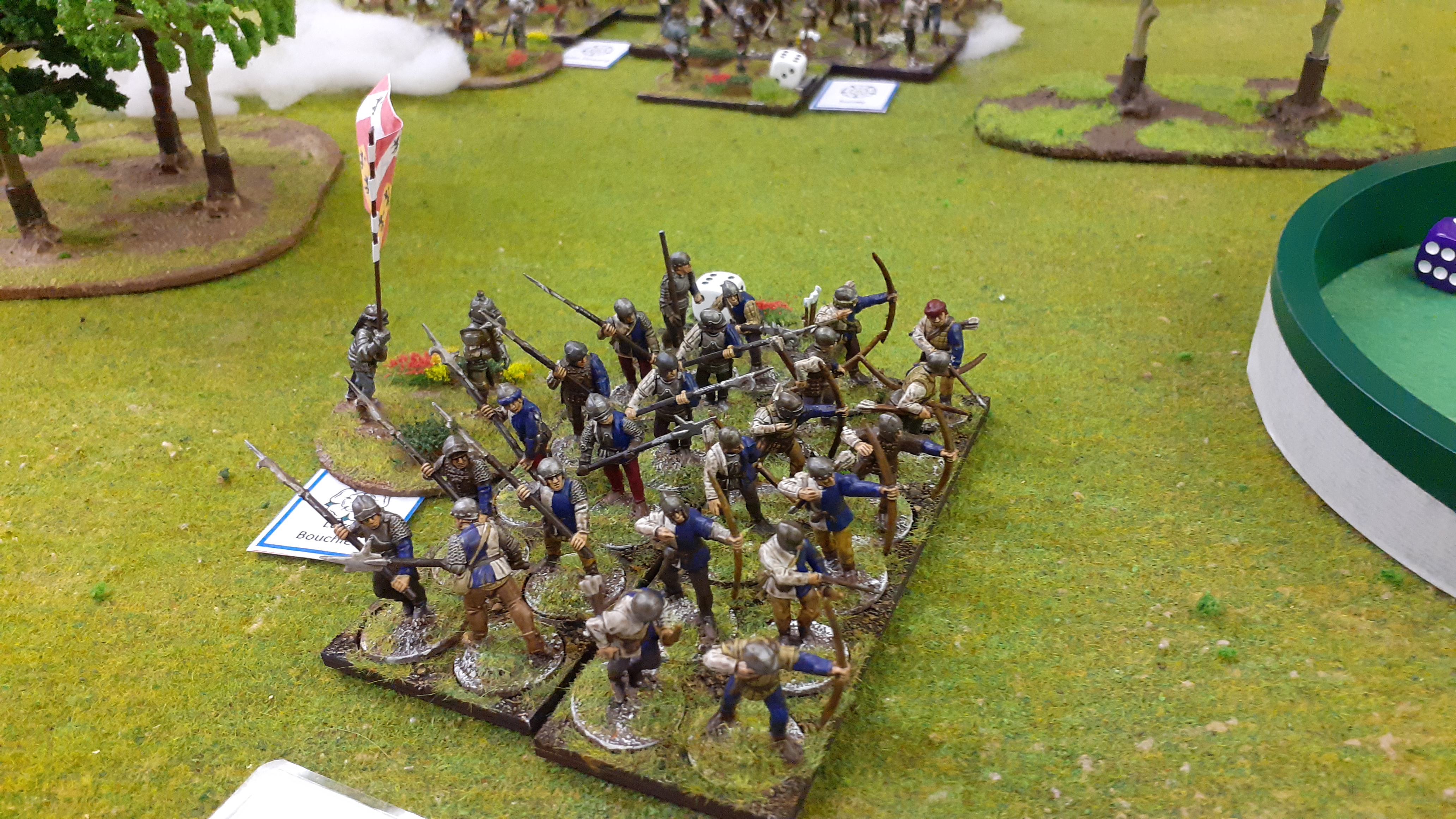 Frenetic fighting was now breaking out in the centre and on the Yorkist left wing. Hastings (Mark K) was having a nightmare with his dice. Saving throws were not being made and casualties were racking up quickly. 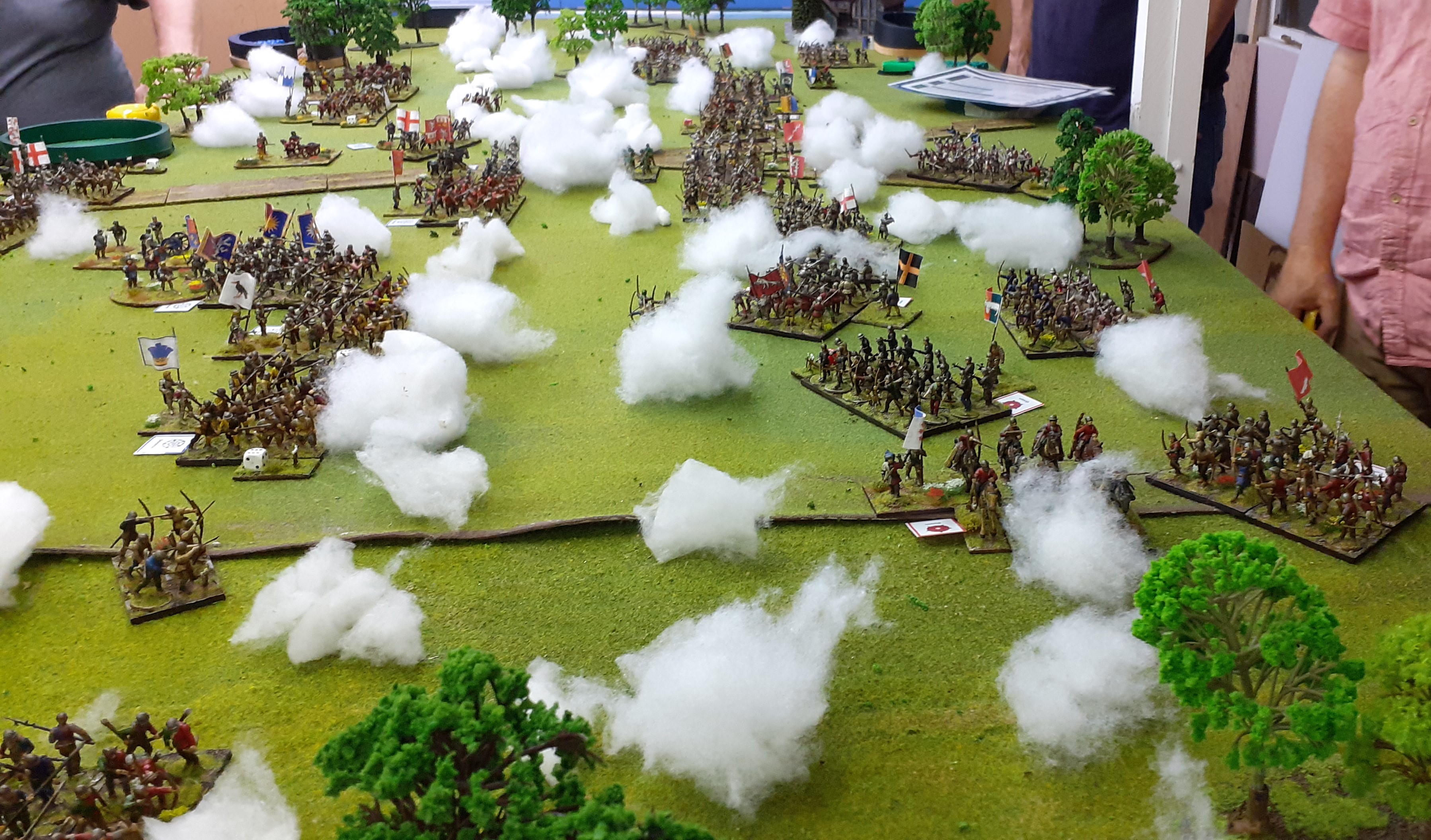 The shere weight of Lancastrian numbers across their centre and right flank was beginning to tell. A bonus card was drawn - special event. A win for the Yorkists and a treachery card drawn. 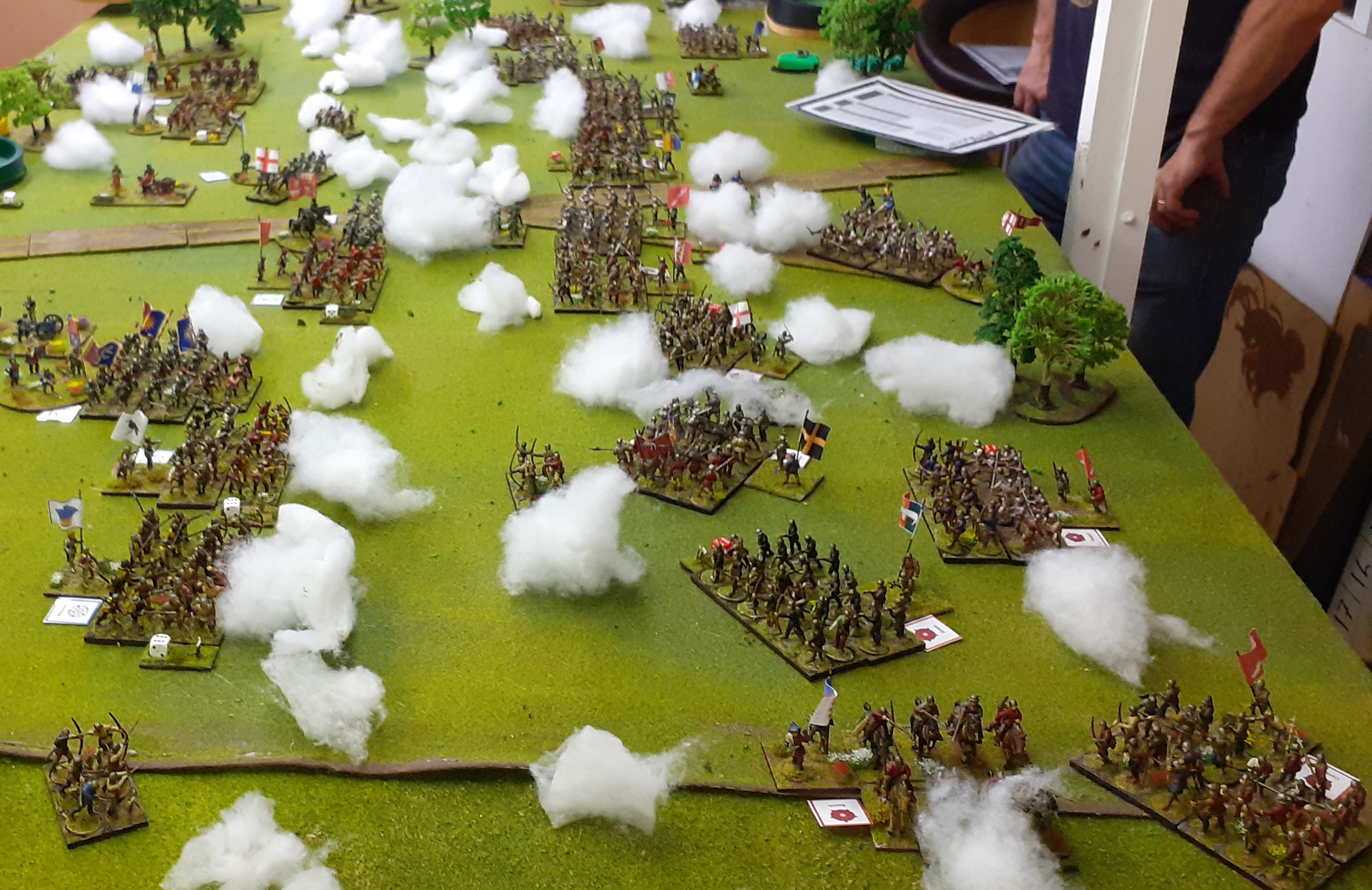 The Yorkist commanders quickly identified a unit of Montague's men at arms lost in the fog in the centre. The treachery card was played and they switched allegiances and rushed into skirmish unit destroying the force quickly. However their victory was short lived as the treacherous unit was cut down in a hail of arrows and fled from the table. 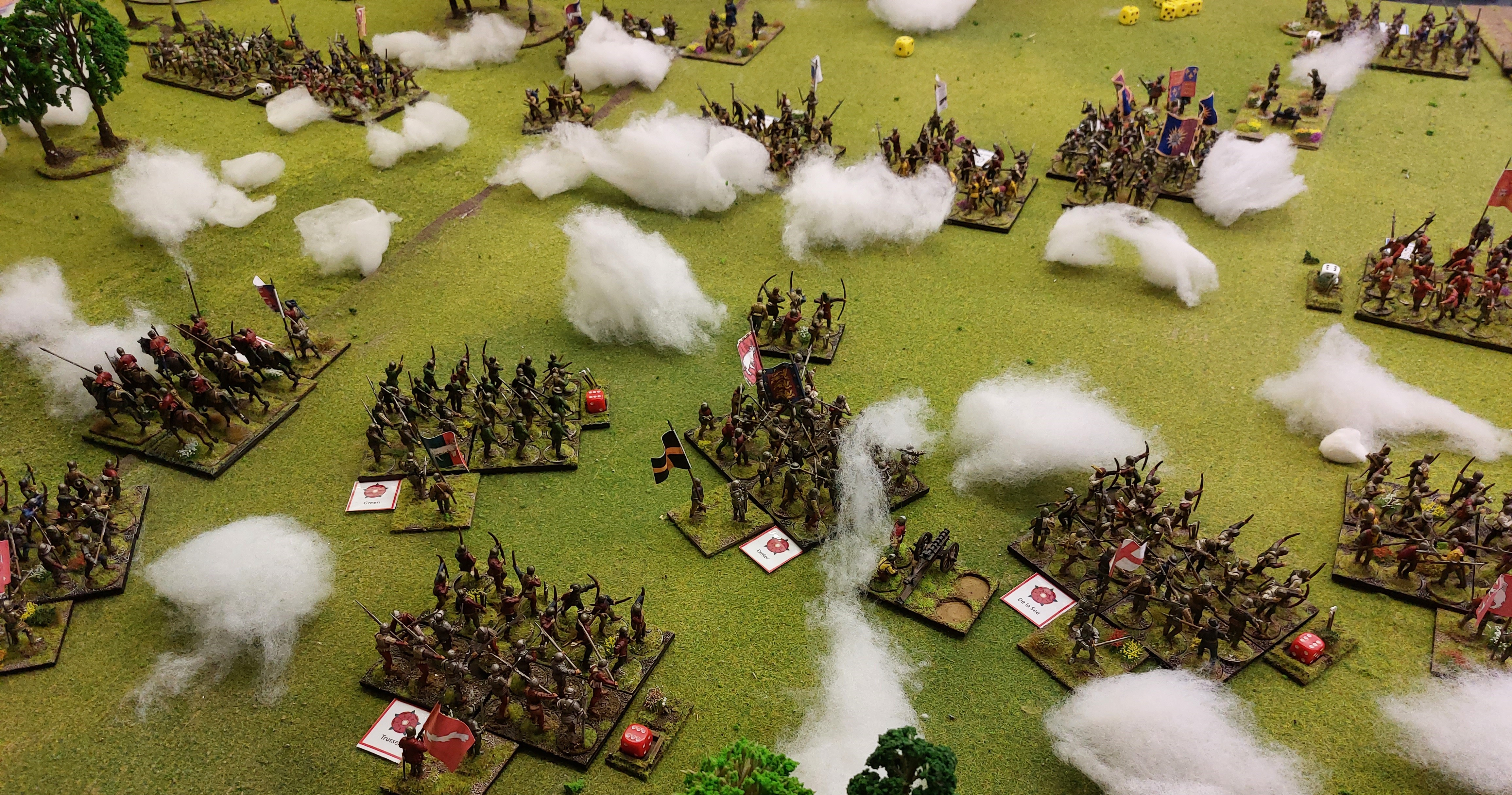 More troops entered the fray. With battles holding their own morale tokens it was going to be brutal. 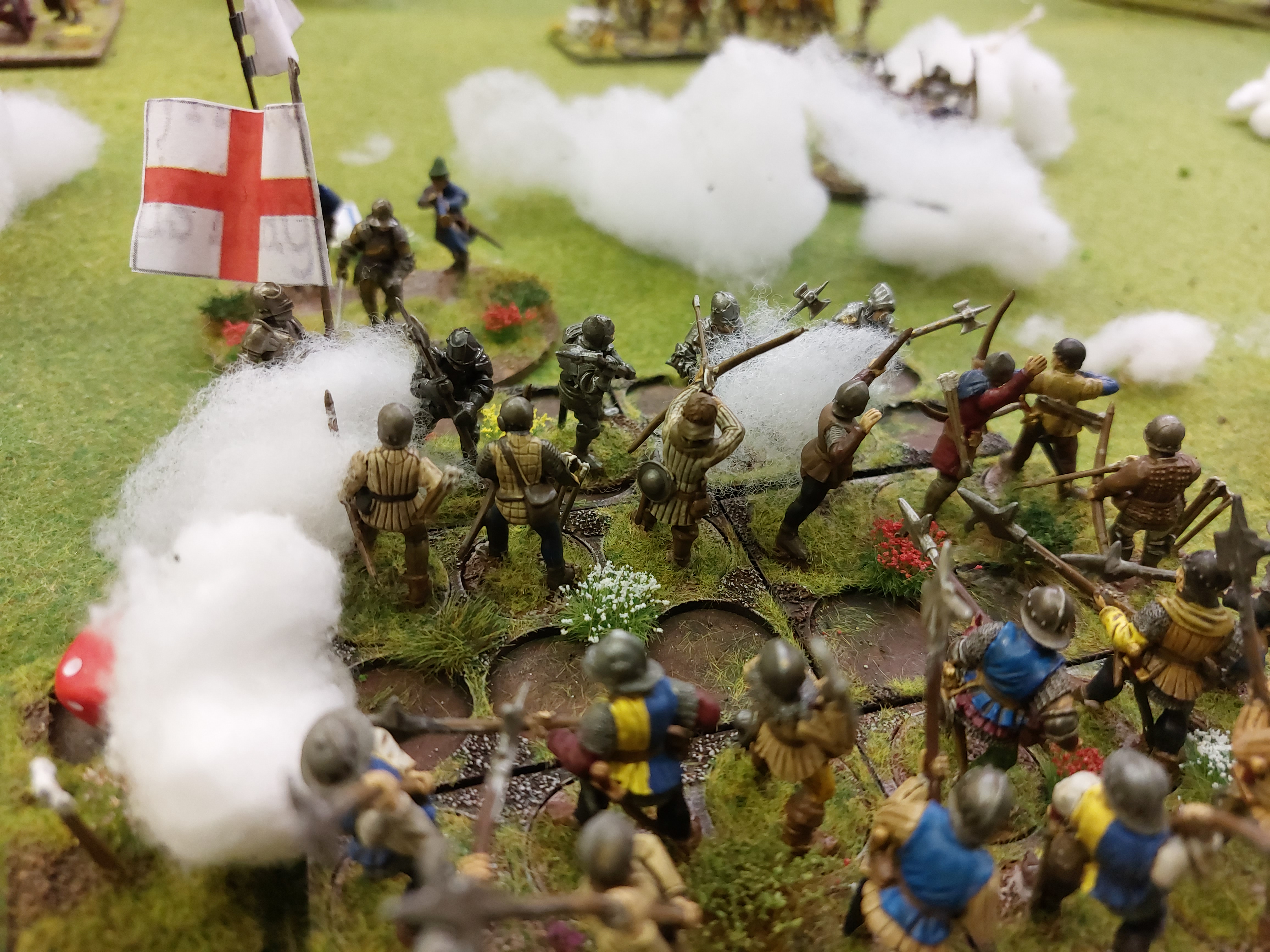 Small fast melees erupted across the table. Many of these lasted several turns with troops fighting out an attritional game. 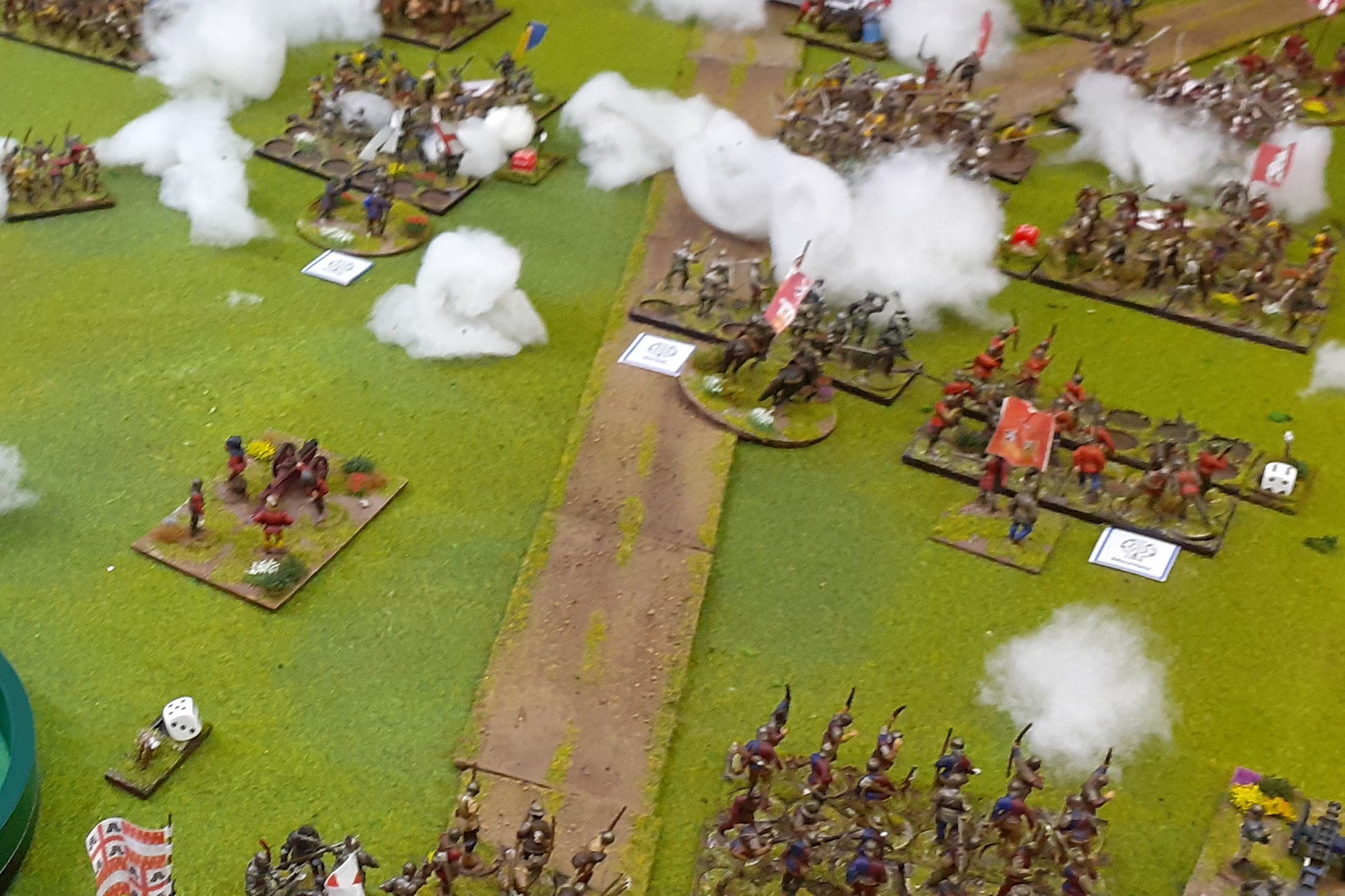 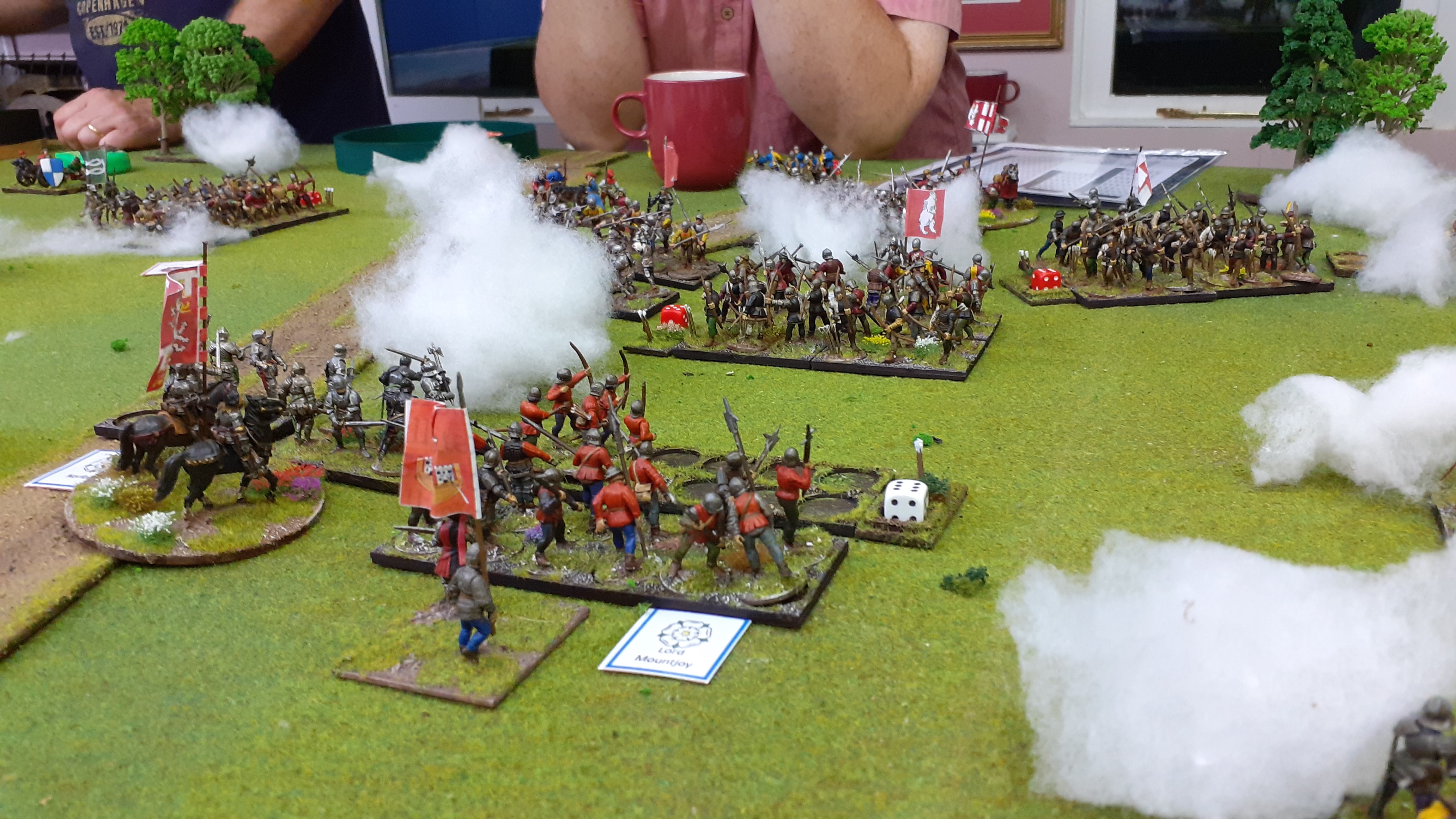 The fog then lifted to a light mist and the arrows of both sides came into play. (We removed half the cotton wool) 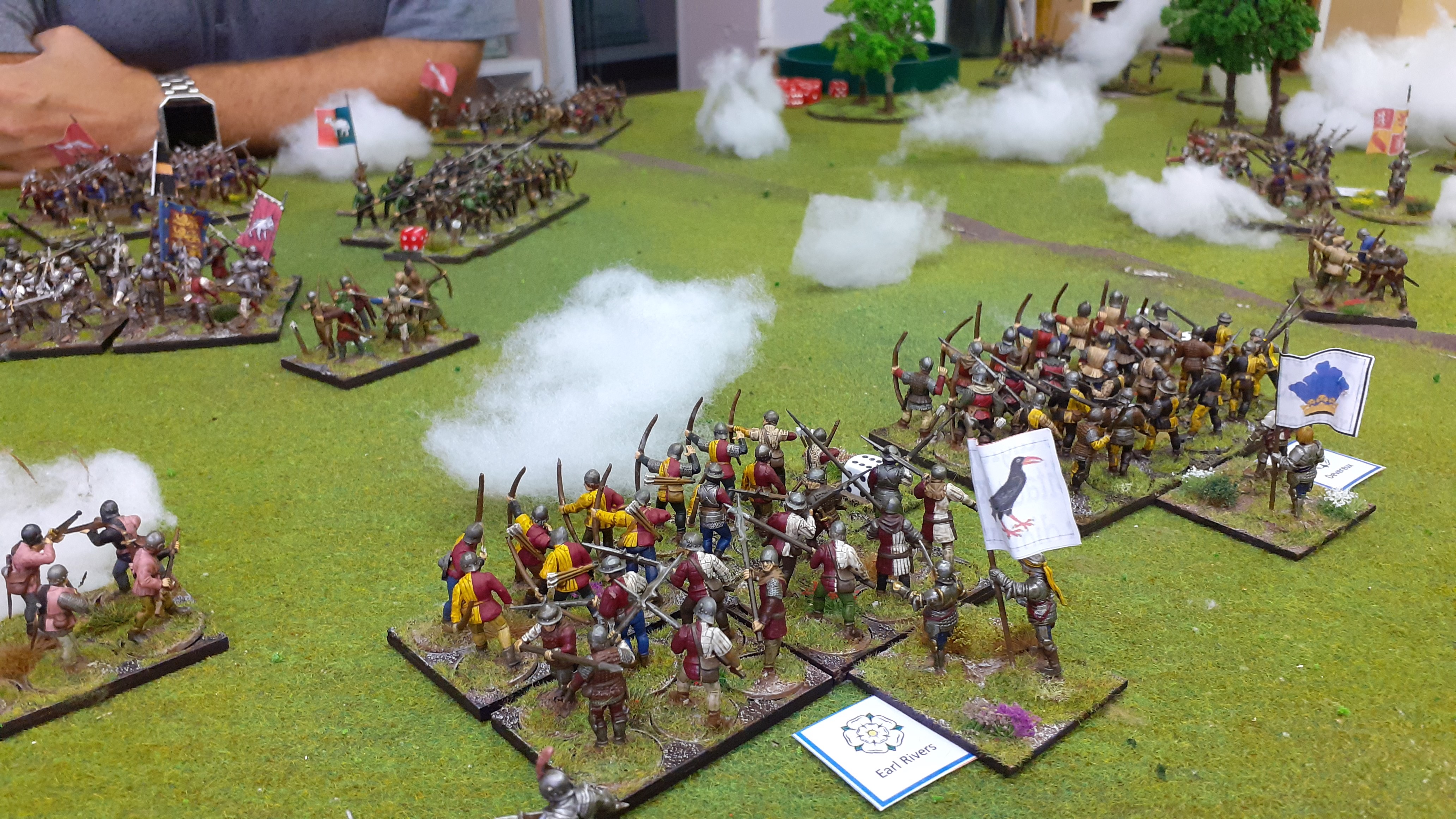 Exeter (Mark F) was doing his very best to get his lines into order to meet the threat of the Yorkist right flank. Whether Gloucester would reach him in the battle was a big ask.

As the melees continued in the centre, attention was being drawn to the Yorkist left flank under Hastings

Oxford, supported by Warwick's reserves were starting to chew up the limited forces of Hastings. His saves still were not improving.

Despite Edward's concerns for his left wing things were starting to improve for the Yorkist cause in the middle and he was convinced the enemy would collapse very soon. 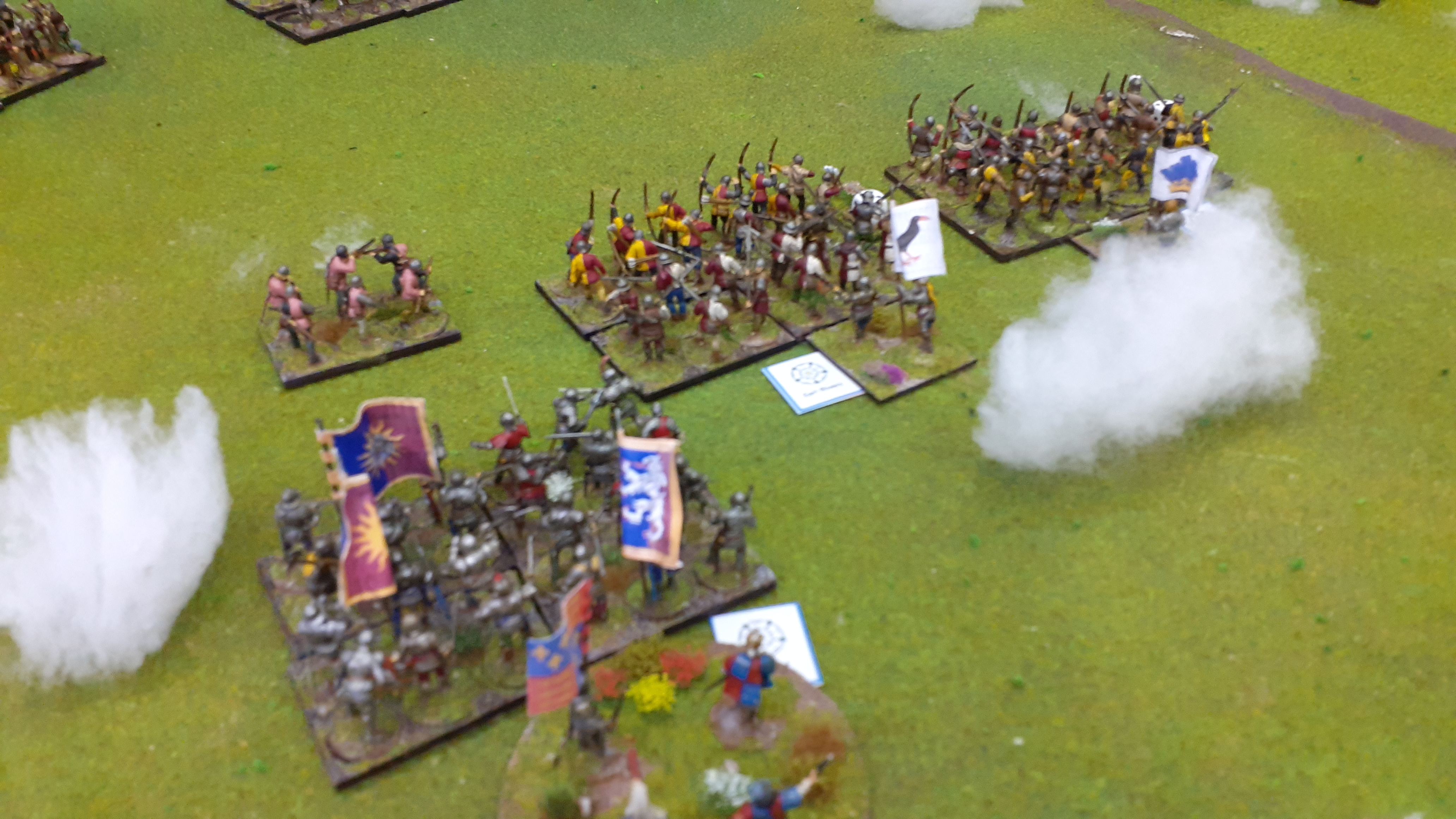 Hastings was on the verge of collapse and with it the the potential battle ....
Some action shots mid way.... 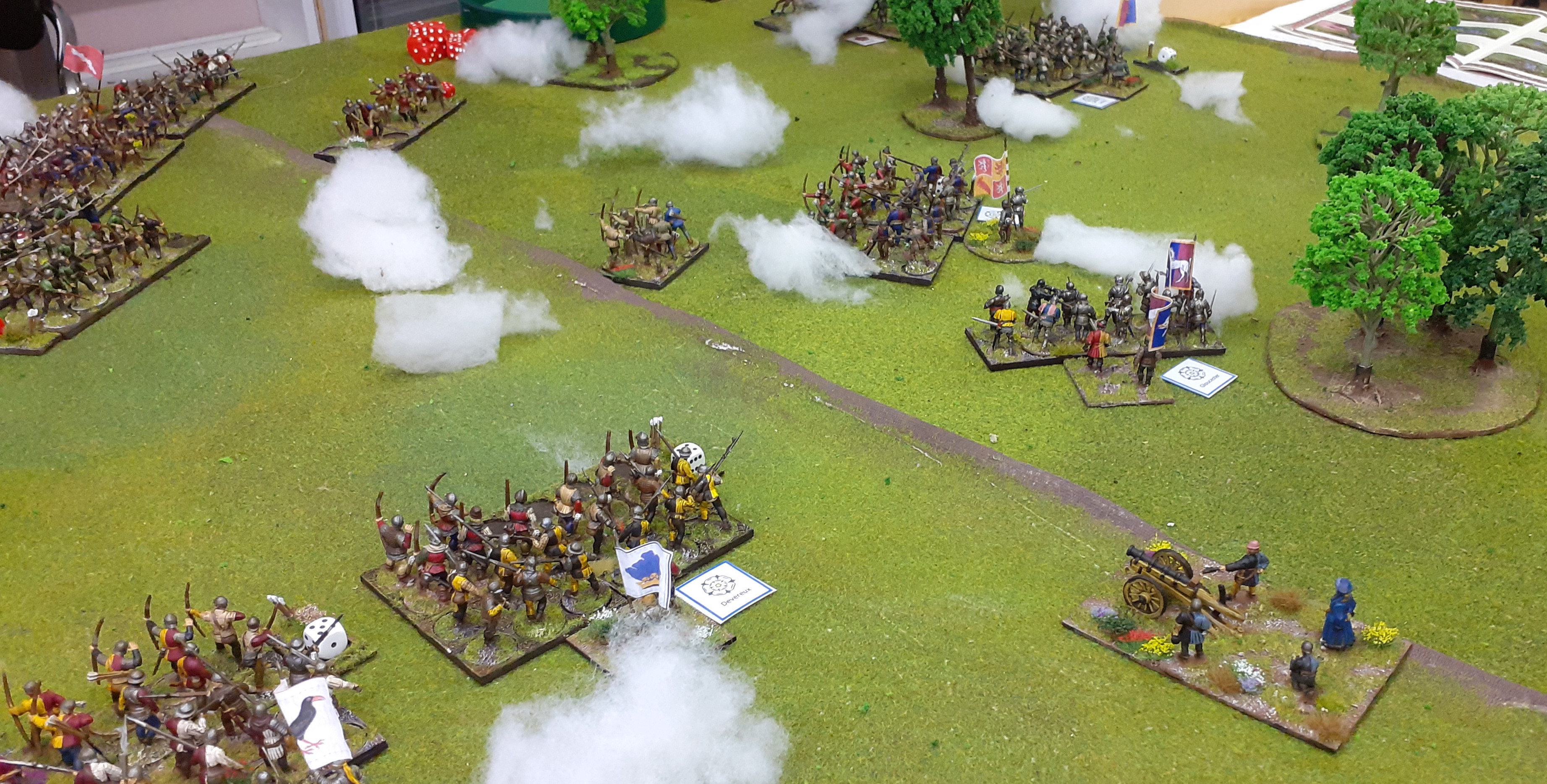 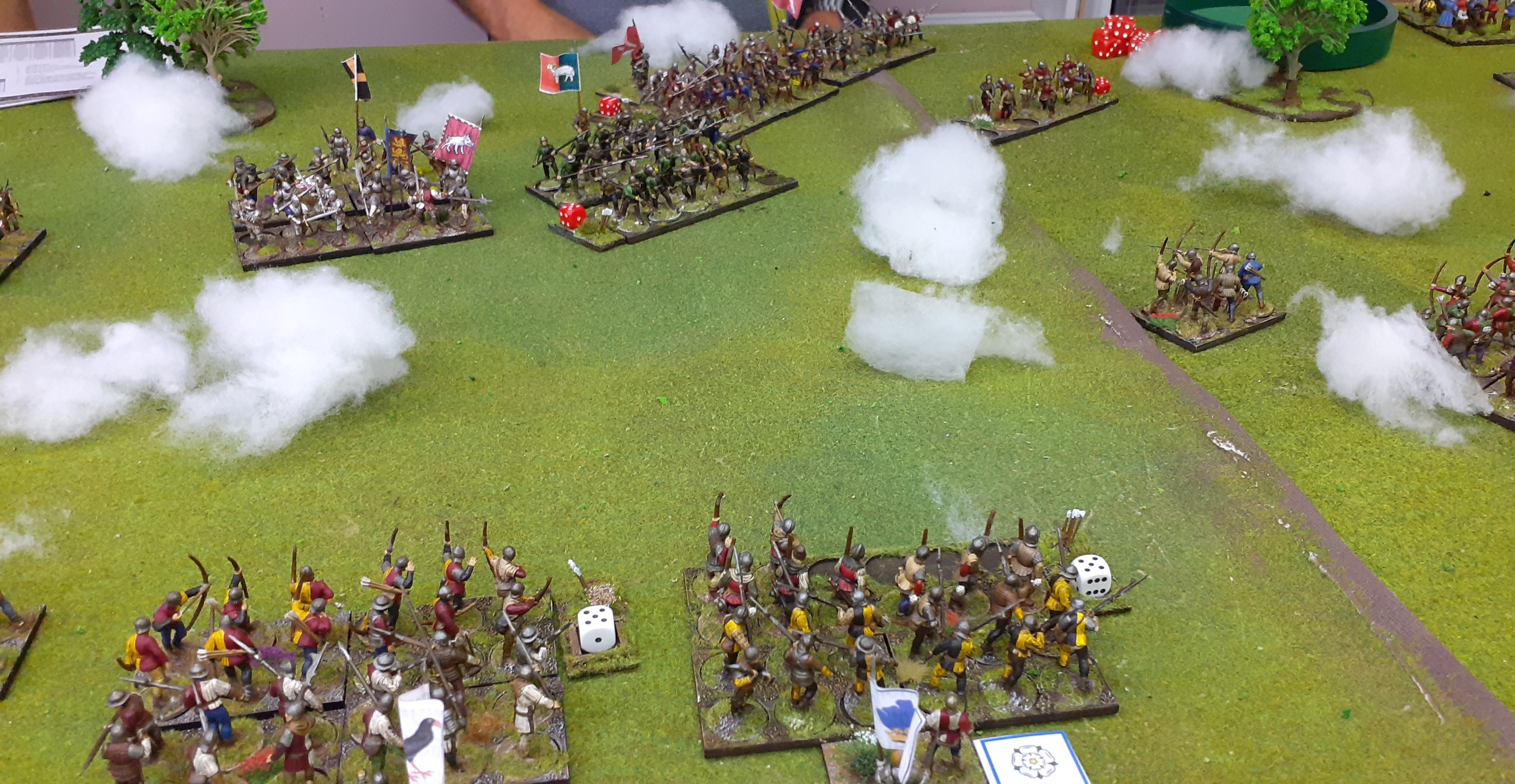 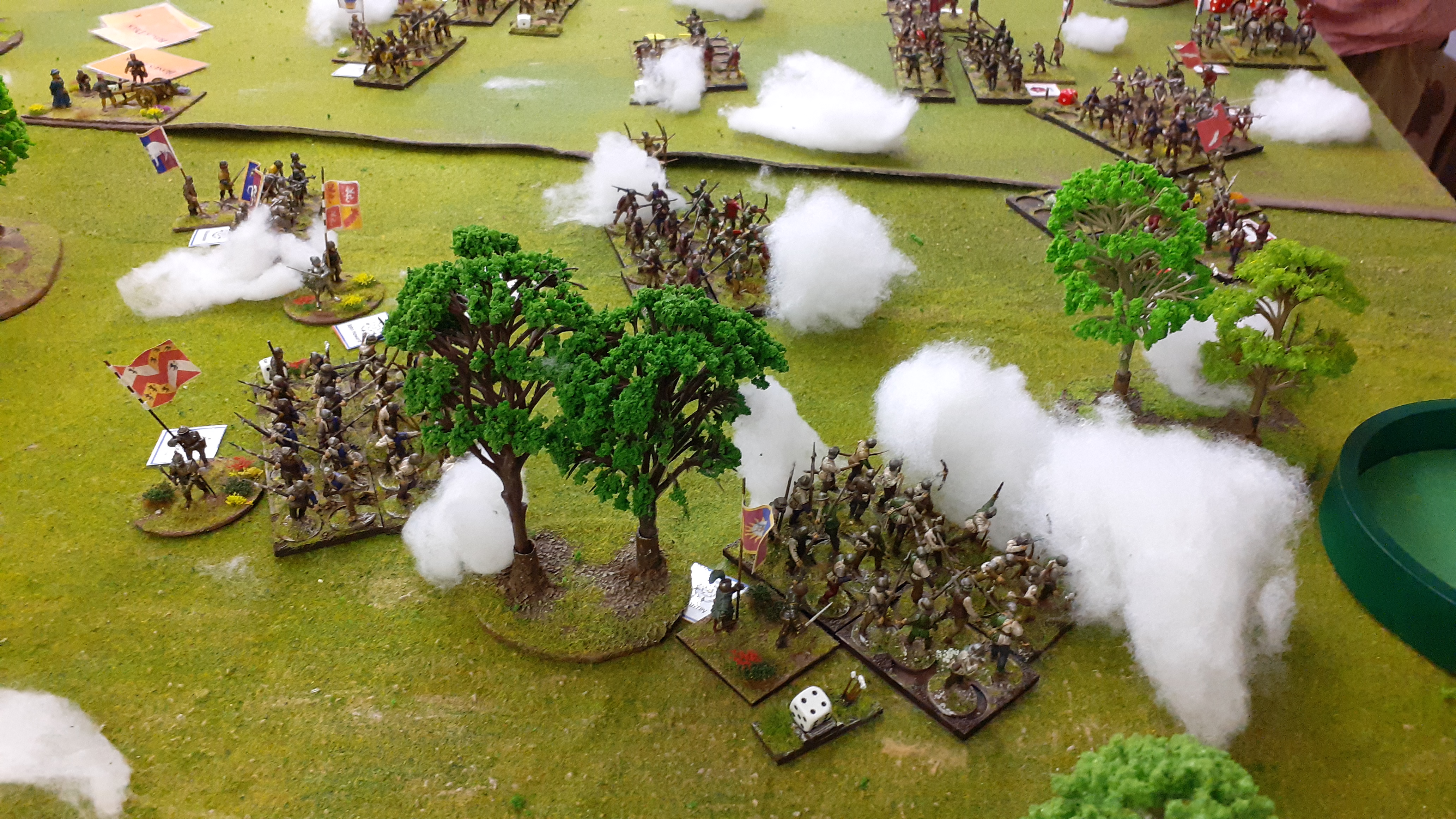 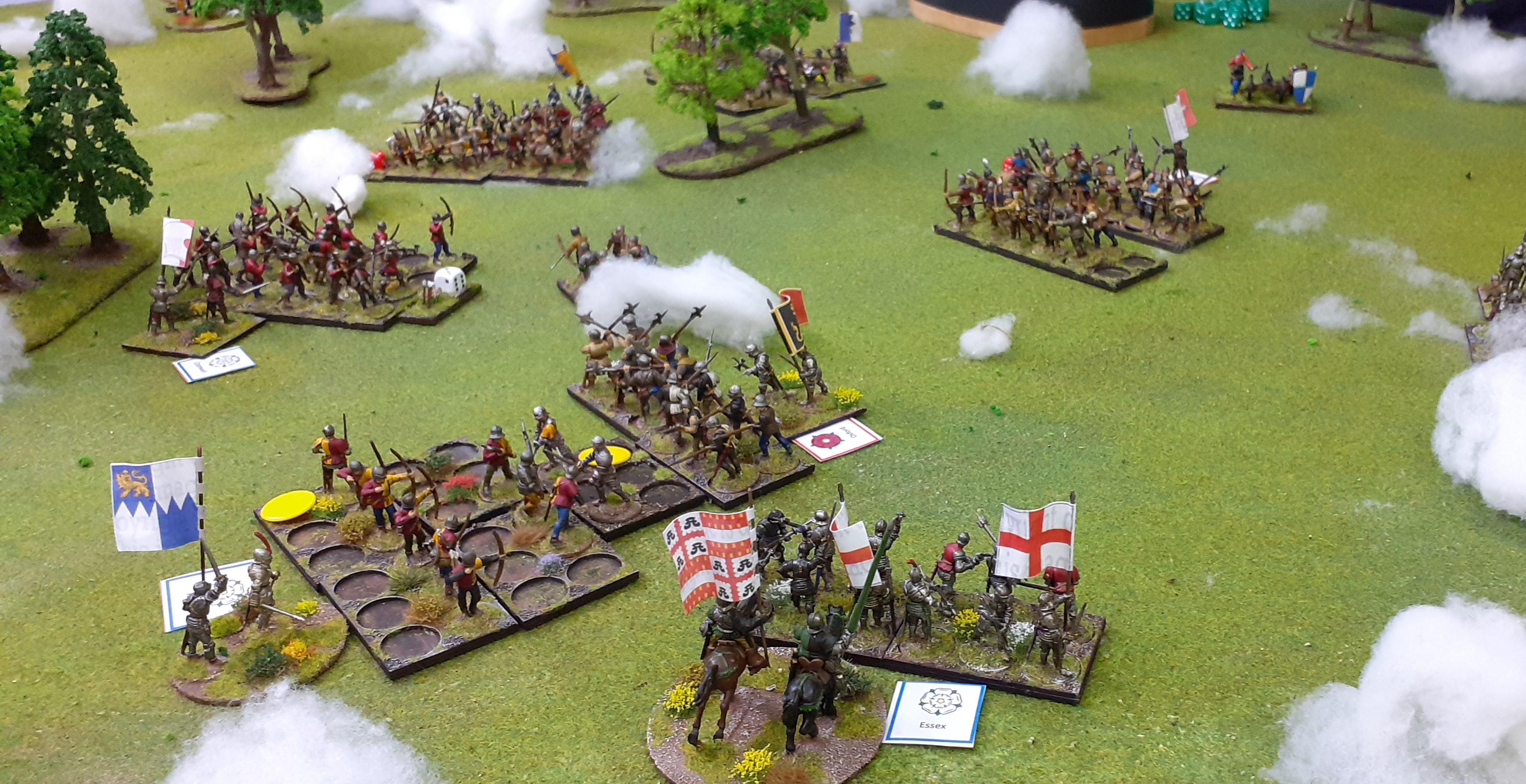 The battle was now snaking across the field, Gloucester taking the fight in the right, a contested centre and the less said about the Yorkist left the better. It was still in the balance 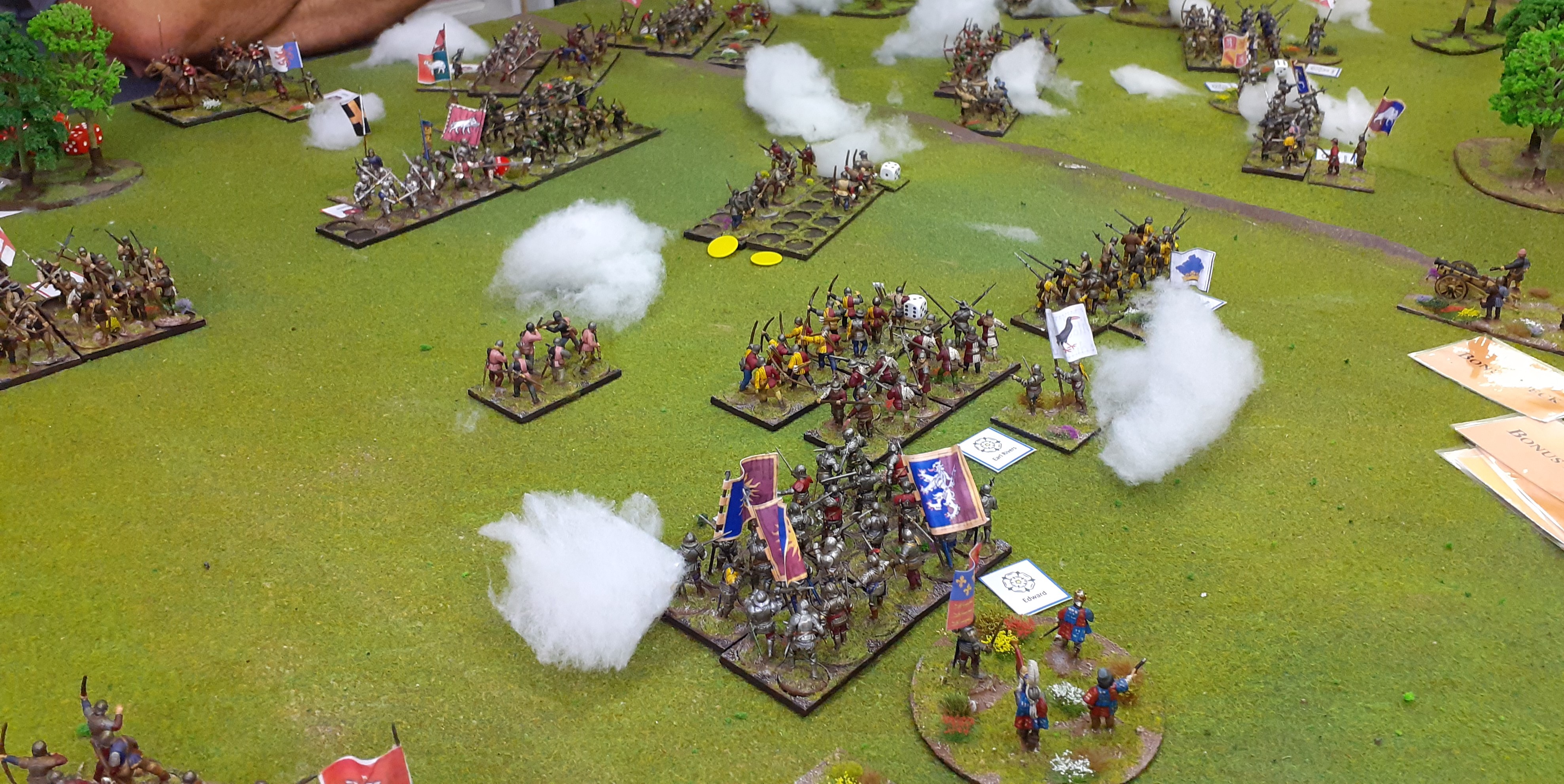 Once again the fog lifted and the field was bathed in spring sunshine. The fog had disipated.

Disaster - Hastings battle on the Yorkist left flank collapsed. With no morale tokens left his army routed (as per the real battle) and Oxford (Tony) was free to focus on the remnants of the Yorkist centre. Time was marching on and we agreed a couple more turns would be played. 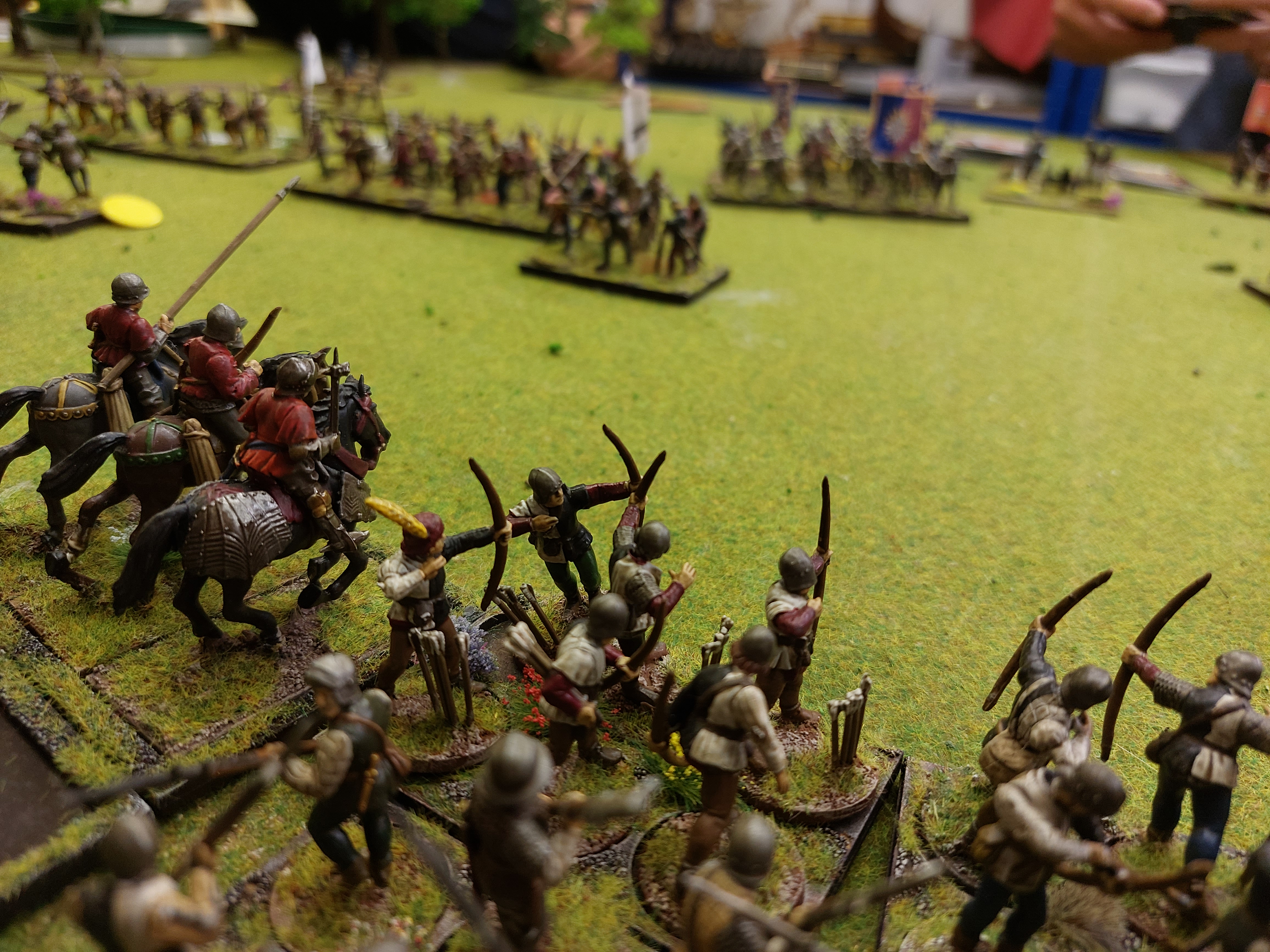 Both the Yorkists and Lancastrians in the centre were desperately weak with many units now retreating from the action. The battle would be decided here.

It was time to bring Edward into the game. His mass block of men at arms were sure to give a heavy punch. The target Warwick close by behind his own retinue.
Edward charged forward but fell short of his target by three inches. Aargh...

A bonus  card was drawn. A yorkist win and the one card we wanted was drawn...a free movement for any unengaged unit. This would give Edward the chance to take on the traitorous Warwick... 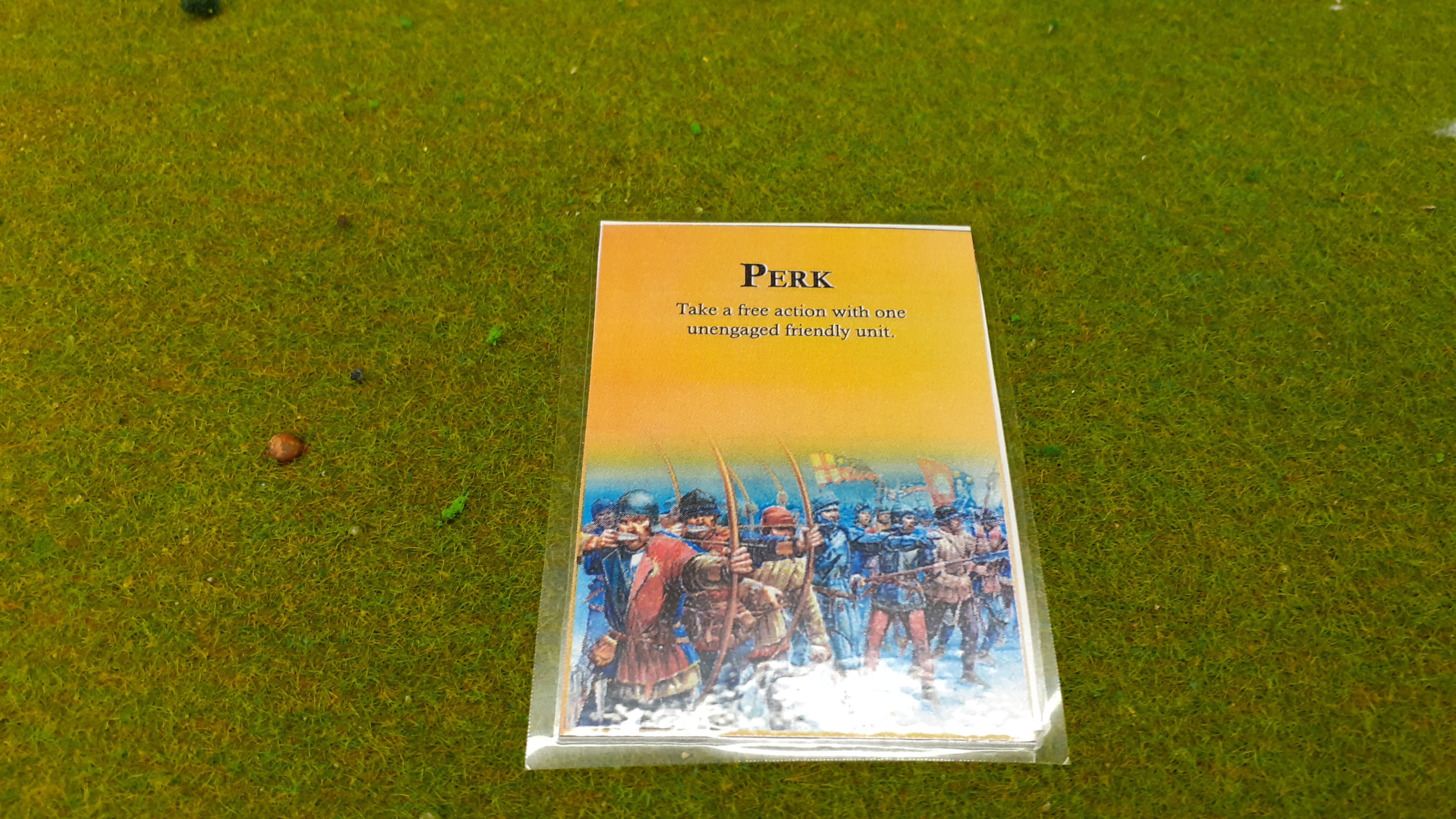 Edward charged in and inflicted serious damage on Warwick's troops - winning the battle Warwick's unit of men at arms and bills were forced to throw a morale check. Alastair (commanding Warwick) has history of rolling the wrong dice at the wrong time in the shed - would it be different this time?
A double one !! Alastair's troops would rout. A victory for Edward once again....cries of victory from the Yorkist side as we determined the Lancastrian army was destroyed. 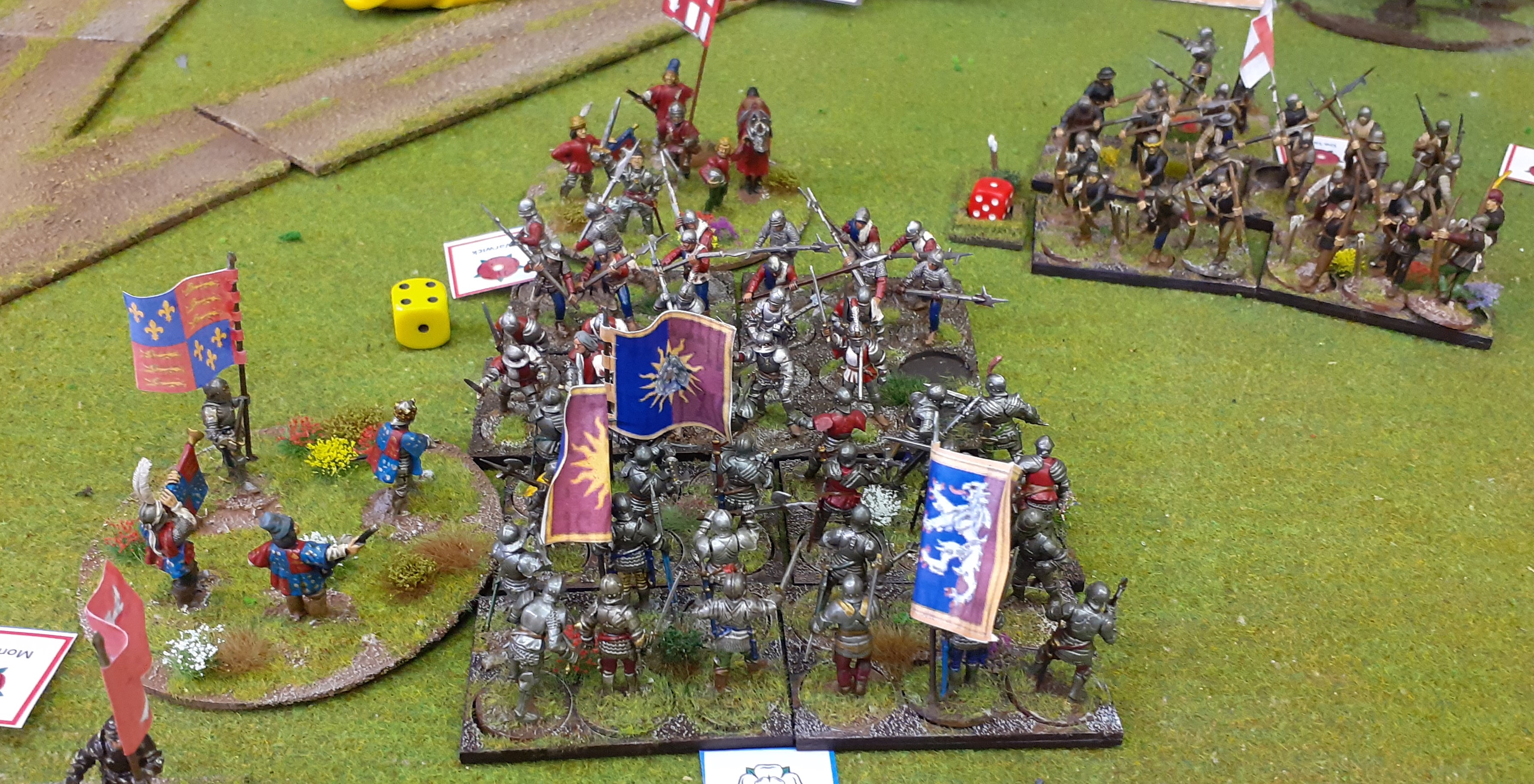 BUT....
A calm Alastair pointed out that as Warwick was attached and as he was just merely wounded he could reroll his ones.
A ten - the Lancastrians held firm. Edward was denied his victory. To rub further salt into his wounds his father in law Earl Rivers failed a check on the next card causing the Yorkist centre to collapse.
A Lancastrian victory won in a most emphatic fashion...
Congratulations to Mark F, Tony and Alastair on their deserved victory.
Marching on to Tewkesbury next !!
Posted by Eric the Shed at 17:44