The Battle of Hexham - a 28mm wargame

Whilst Mark K, Mark F and myself were bashing about with the battle of Hedgeley Moor (see previous post) Alastair and John were refighting the smaller engagement at Hexham. I decided to refight the two battles on the same night as they were both relatively small affairs and I had five players. Fortunately the table arrangement in the shed allowed the configuration of two games simultaneously. Both games played well but the concensus of opinion was that the two game approach was less sociable and one not to be regularly repeated.

The Battle of Hexham (source Wikipedia)

The Battle of Hexham, 15 May 1464, marked the end of significant Lancastrian resistance in the north of England during the early part of the reign of Edward IV.

The battle was fought near the town of Hexham in Northumberland. John Neville, later to be 1st Marquess of Montagu, led a modest force of 3,000-4,000 men, and routed the rebel Lancastrians. Most of the rebel leaders were captured and executed, including Henry Beaufort, Duke of Somerset, and Lord Hungerford. Henry VI, however, was kept safely away (having been captured in battle three times earlier), and escaped to the north.

With their leadership gone, only a few castles remained in rebel hands. After these fell later in the year, Edward IV was not seriously challenged until the Earl of Warwick changed his allegiance from the Yorkist to the Lancastrian cause in 1469.

After the Battle of Towton, the Lancastrians failed to prevent the Yorkists from concluding peace negotiations with Scotland in 1463, and soon found that their northern base of operations was now threatened. It was decided to mount a campaign in the north of England to gather Lancastrian support before a huge force under Edward IV could muster in Leicester and move north to crush the rebellion.

The Lancastrian army moved through Northumberland in late April 1464 under the Duke of Somerset, and gathered support from Lancastrian garrisons. After the Lancastrians lost the Battle of Hedgeley Moor on 25 April 1464 to a Yorkist force led by John Neville, Lord Montagu, the Lancastrians again met Neville, this time near Hexham. The two sides met outside Hexham on 14 May 1464.

Details of the site of the battle, the composition and number of combatants and the events are sketchy but it is thought that the battle was relatively bloodless.

The Lancastrian camp was near Linnels Bridge over the Devil's Water found slightly to the south of Hexham. The Yorkists crossed onto the south bank of the Tyne on the night of 12–13 May and were, by the morning of the 14th, in a position to attack Hexham. Presumably the Yorkist advance was at speed, as despite warnings by their own scouts the Lancastrians had little time to prepare for battle.

It is thought that Somerset rushed his forces to a site near Linnels Bridge and deployed his troops in three detachments in a meadow near the Devil's Water, there he hoped he could engage the Yorkist army before it moved past him into Hexham. No sooner had the Lancastrians taken their positions than the Yorkists charged down from their positions on higher ground. Upon seeing the Yorkist advance the right detachment of the Lancastrian army, commanded by Lord Roos, turned and fled across the Devil's Water and into Hexham, before a single blow had been struck. The remnants of Somerset's force were in a hopeless situation, hemmed in and unable to manoeuvre; the Yorkist troops charged through the one opening at the east end of Linnel's Meadow and engaged the bewildered Lancastrian soldiers.

Lancastrian morale collapsed, and after some token resistance the remains of Somerset's army was pushed into the Devil's Water by the Yorkist infantry. A chaotic rout followed, men either drowned in the river or were crushed as they tried to climb the steep banks of the Devil's Water in the retreat towards Hexham. Most, however, were trapped in West Dipton Wood on the north bank of the river and were forced to surrender when the Yorkists approached.

Somerset himself, with a few loyal supporters, attempted to fight his way out of the carnage, unhorsed and badly wounded, he took shelter in a cottage but was discovered and taken to Hexham where he was imprisoned in Hexham Gaol. Reports conflict as to whether King Henry VI was camped with the Lancastrian troops or nearby, and whether he fled the area before or during the battle, but he did manage to escape and avoided capture. 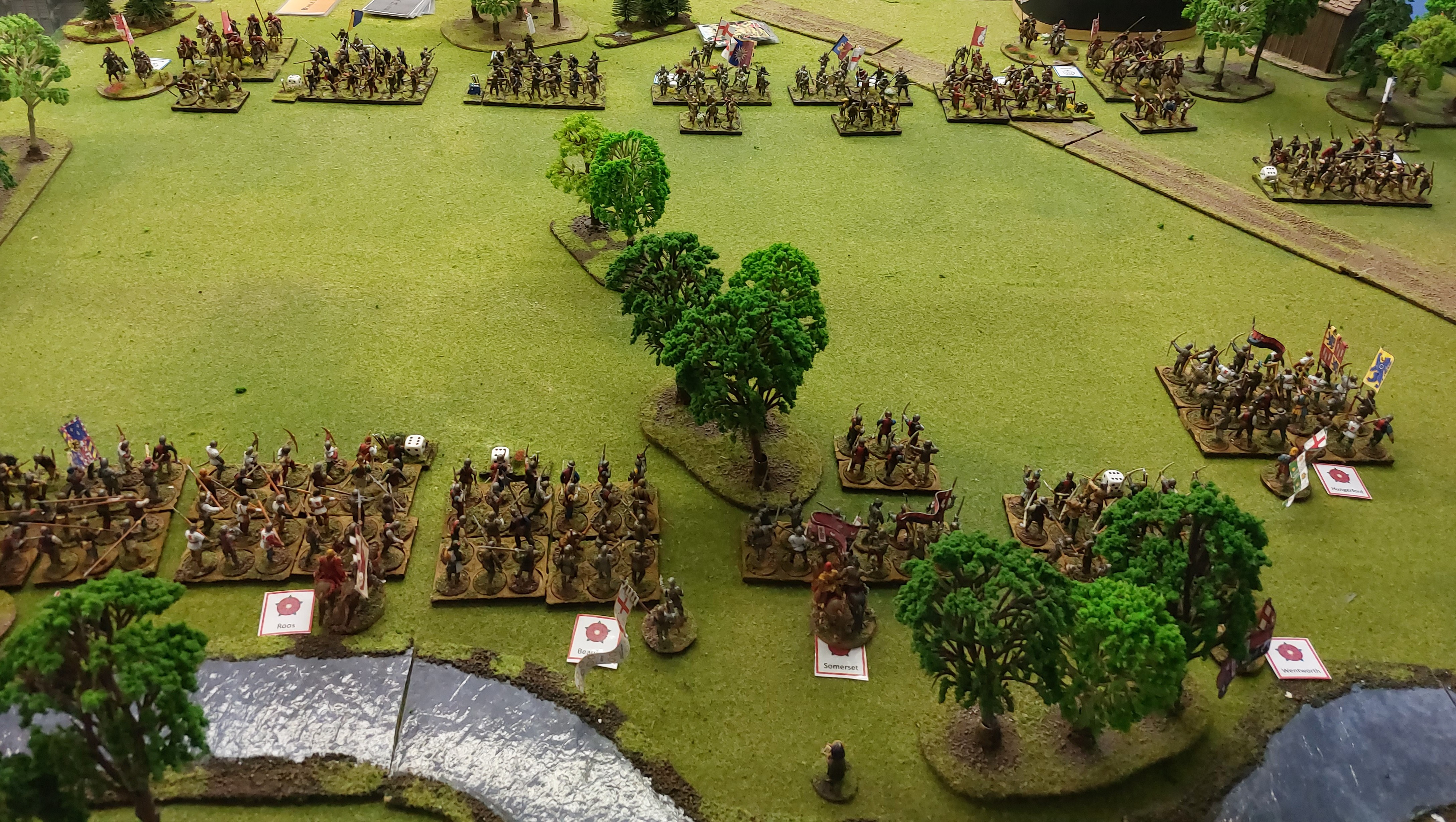 The Refight of the Battle

This is very much a one sided battle with the Yorkists holding all the advantages of terrain, timing, and numbers. However there are some elements that could make this a good game.

As before at Hedgeley Moor the quality of the Lancastrian troops was debatable and Roos once again fled the field at the beginning. To reflect this all of the troops under Roos command will start with one less morale token (ie two token taken from the pot)

Furthermore historic accounts suggest that Keng Henry VI was at the battle but managed to escape before the melee. In our refight the King is on the table and should he be able to escape via Linnels bridge the L:ancastrianbs will win a minor victory. The Yorkists must not only catch catch the king to win the day but also crush the Lancastrian army 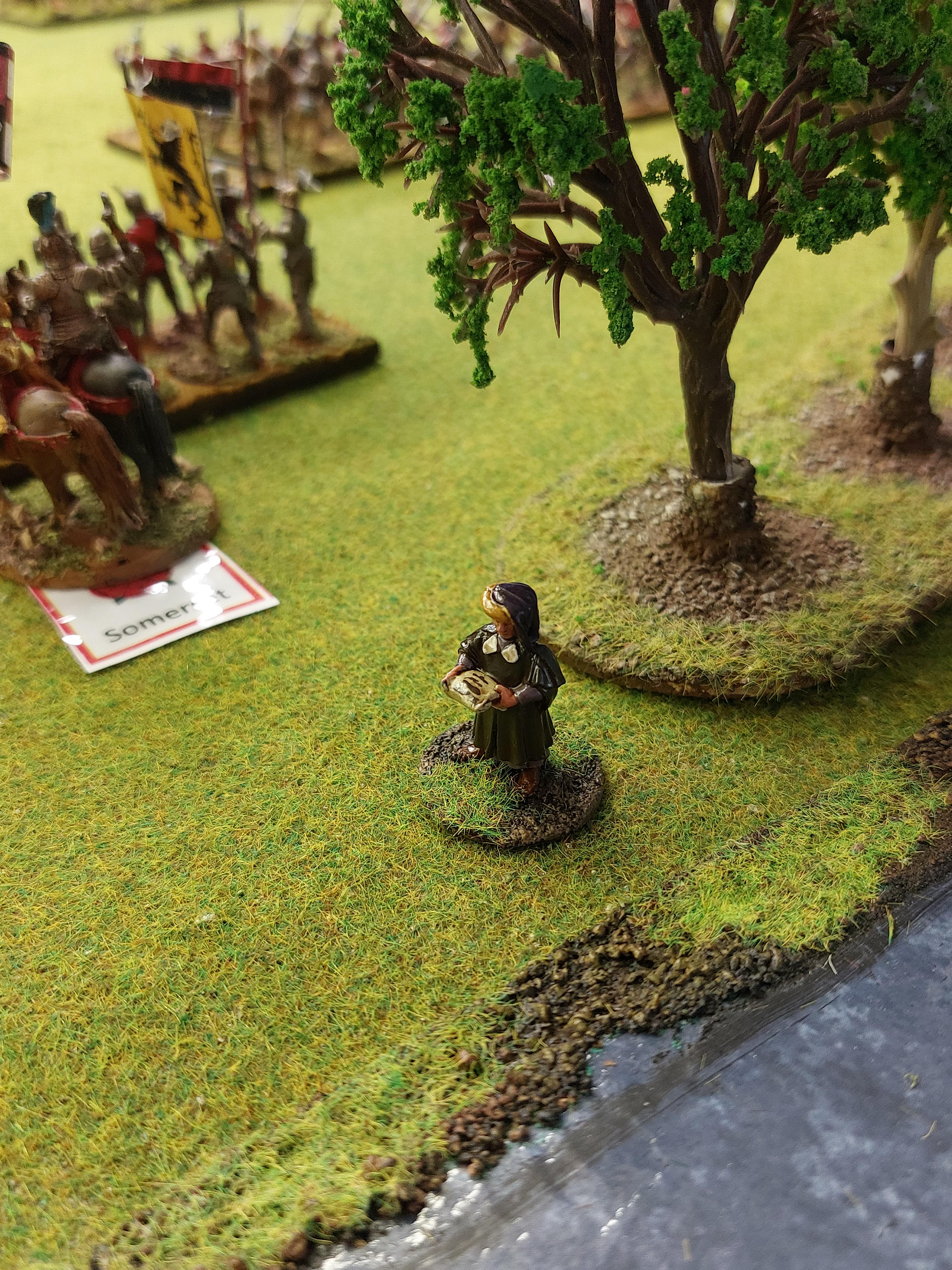 A big thank you to Alastair for his battle write up and for the photos that follow...

The outnumbered Lancastrians, with their backs to the river had little chance of holding off the larger Yorkist army...their hopes rested on getting the King over the bridge to safety.

After a few cautious arrow volleys the Yorkists charged their light horse into a combined Archer and Bill block.  The archers stood and fired, devastating the Yorkist cavalry which was then charged in turn by the Lancastrian horse.  The Yorkists were forced to push forward as fast as possible to prevent the King making his escape but disaster struck when the Yorkist Men at Arms were routed by bowfire and a charge from Somerset and his foot knights, causing other units to waver and break.  Suddenly the Yorkist centre looked very empty and it looked like history might be about to be re-written.

The King continued to make his way slowly to the bridge but was delayed for a turn by a sneaky Yorkist bonus card which would prove crucial.

Somerset's  Men at Arms crashed into more Yorkist Billmen but were then caught in a flanking charge by the few remaining Yorkist Men at Arms (another sneaky use of a card!), routing and taking Billmen and Archers with them.  By the bridge the Lancastrian Bills were caught in a fight with archers who defied the odds and held them up for several turns.

The battlefield was in chaos with units falling back daunted or charging again into their enemies.  The Yorkists, although starting the game with a large advantage in morale tokens, were now wavering and had lost 3 of their commanders.  The toll on the  Lancastrians was too much though and their last token was lost, ending the game.  The King stood on the bridge, almost making it to to safety... 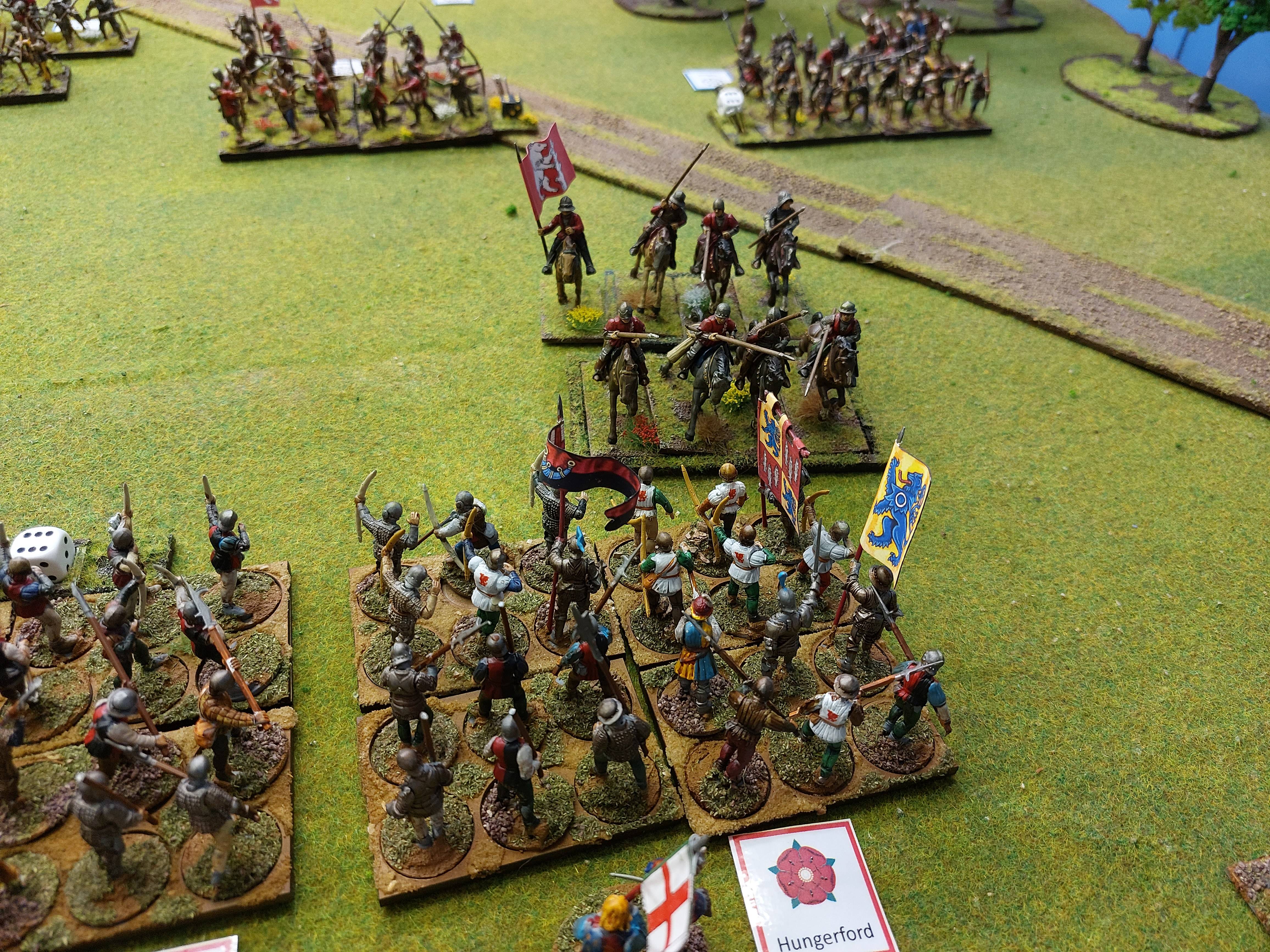 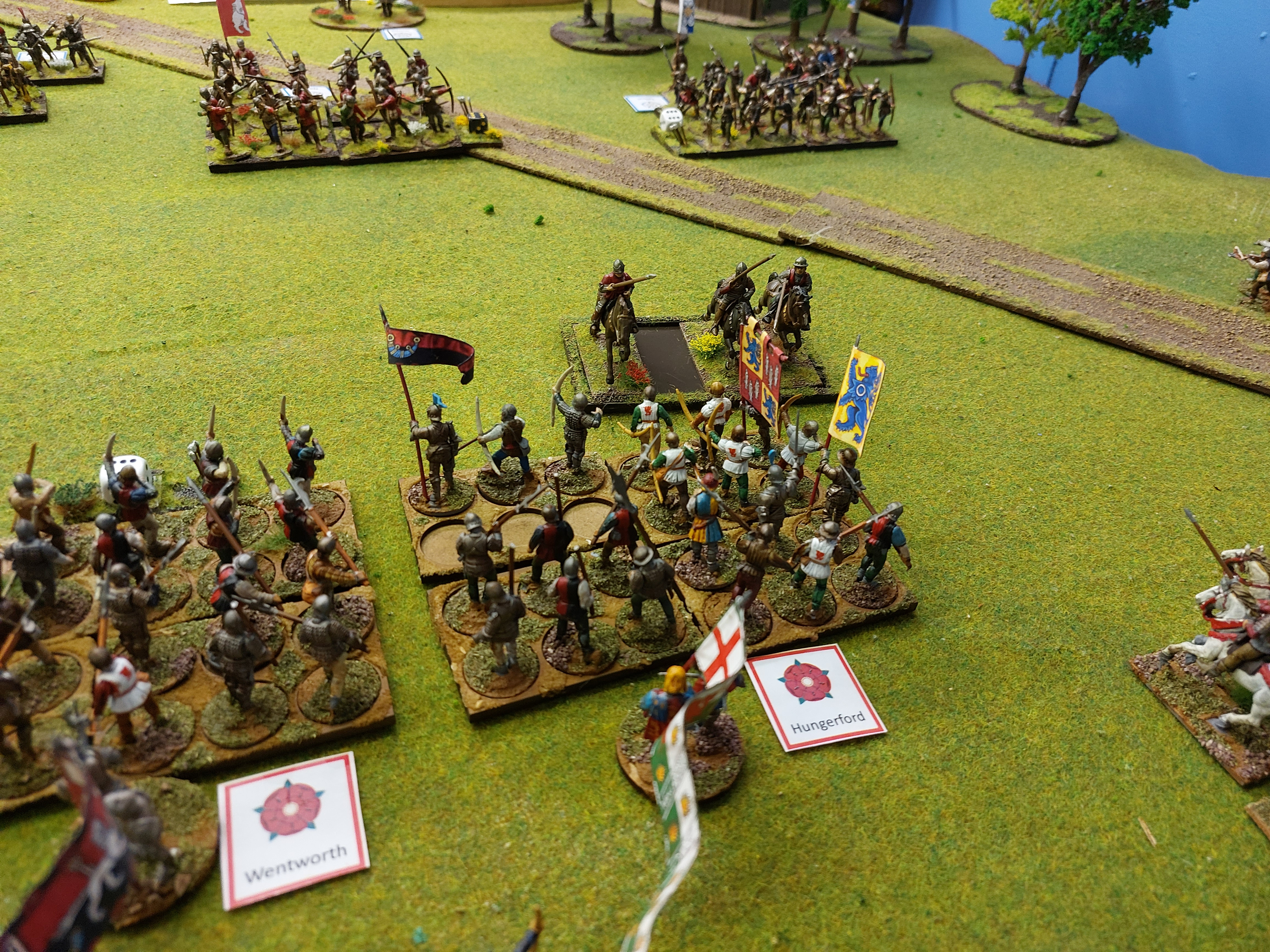 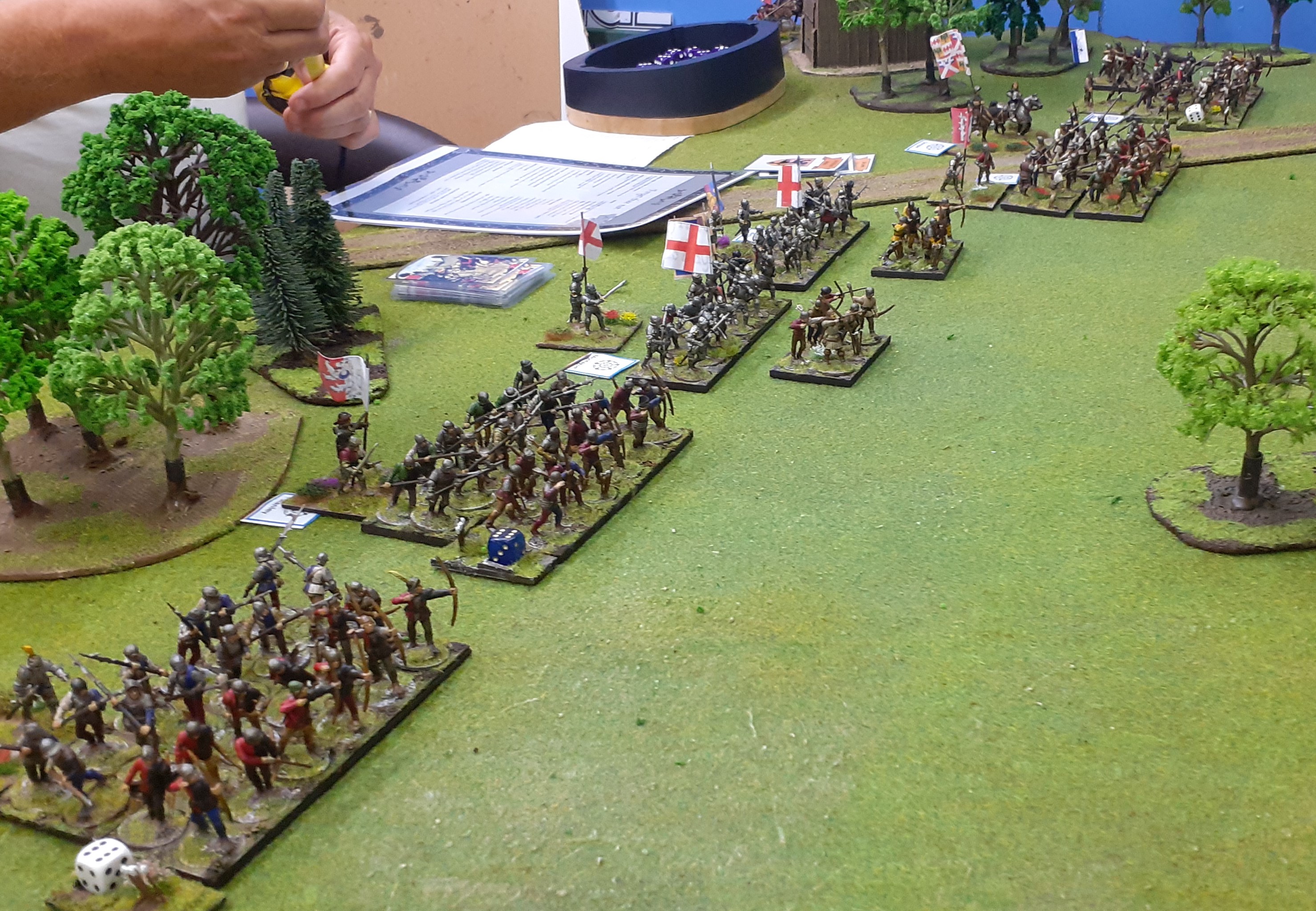 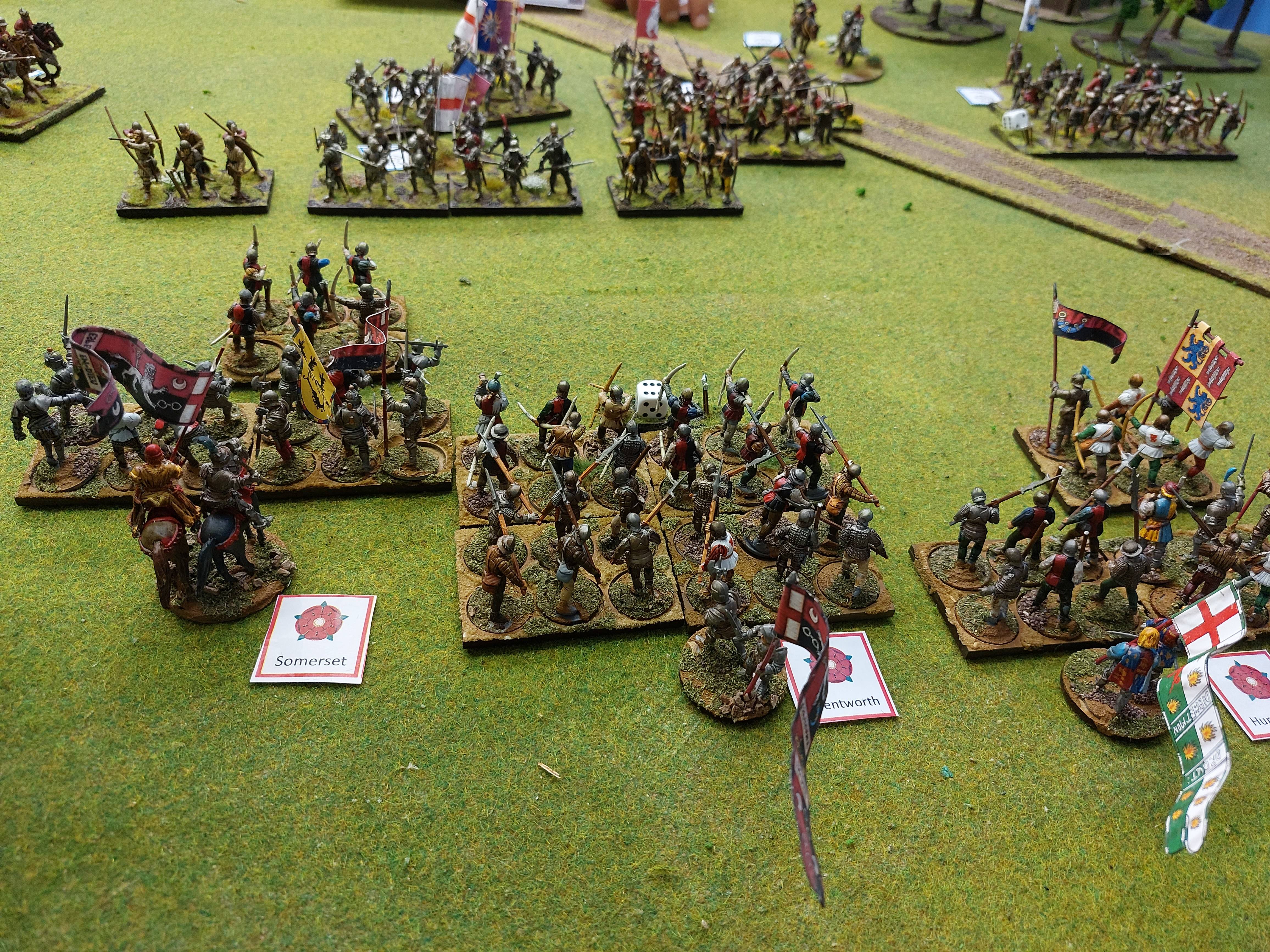 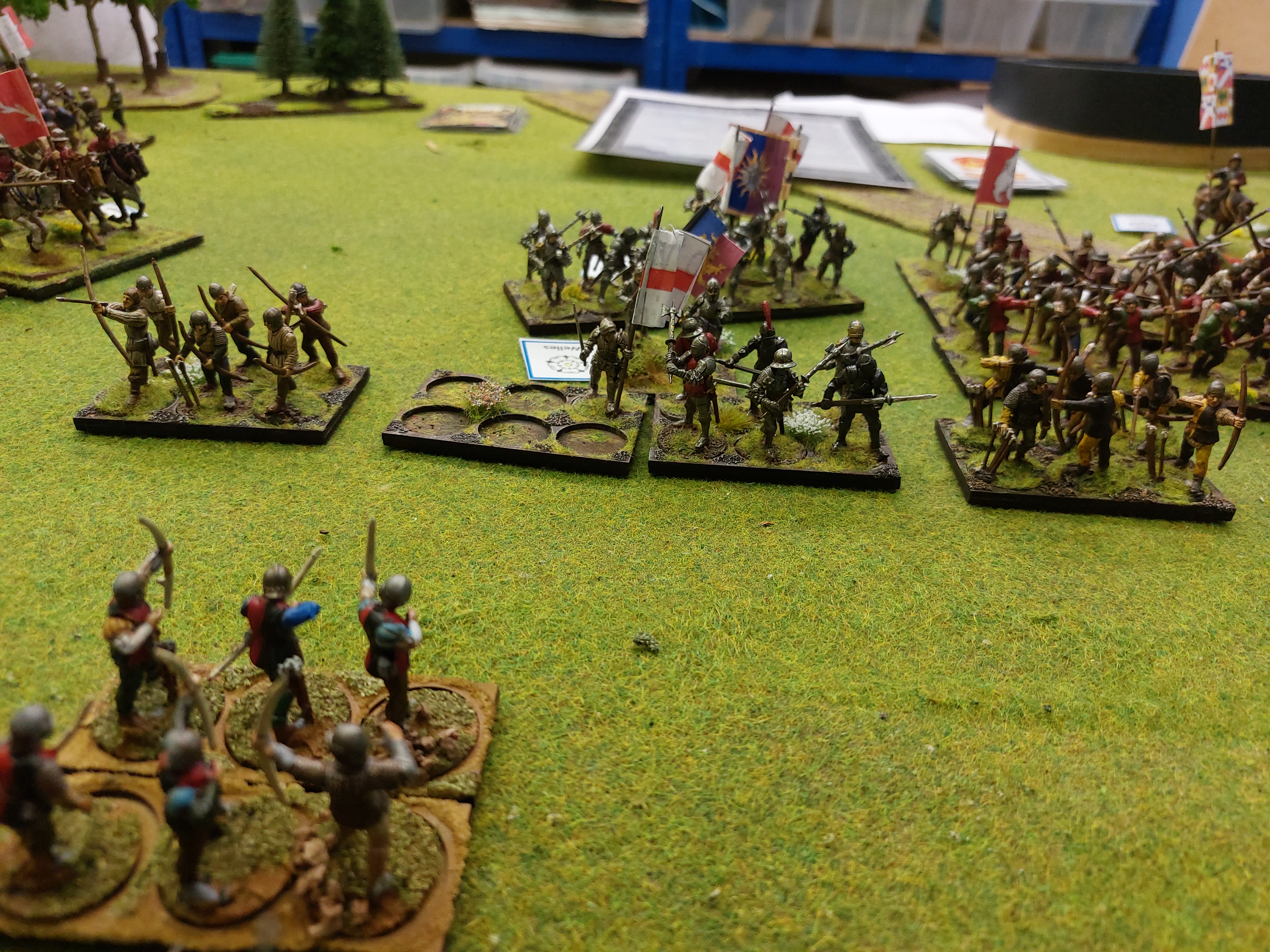 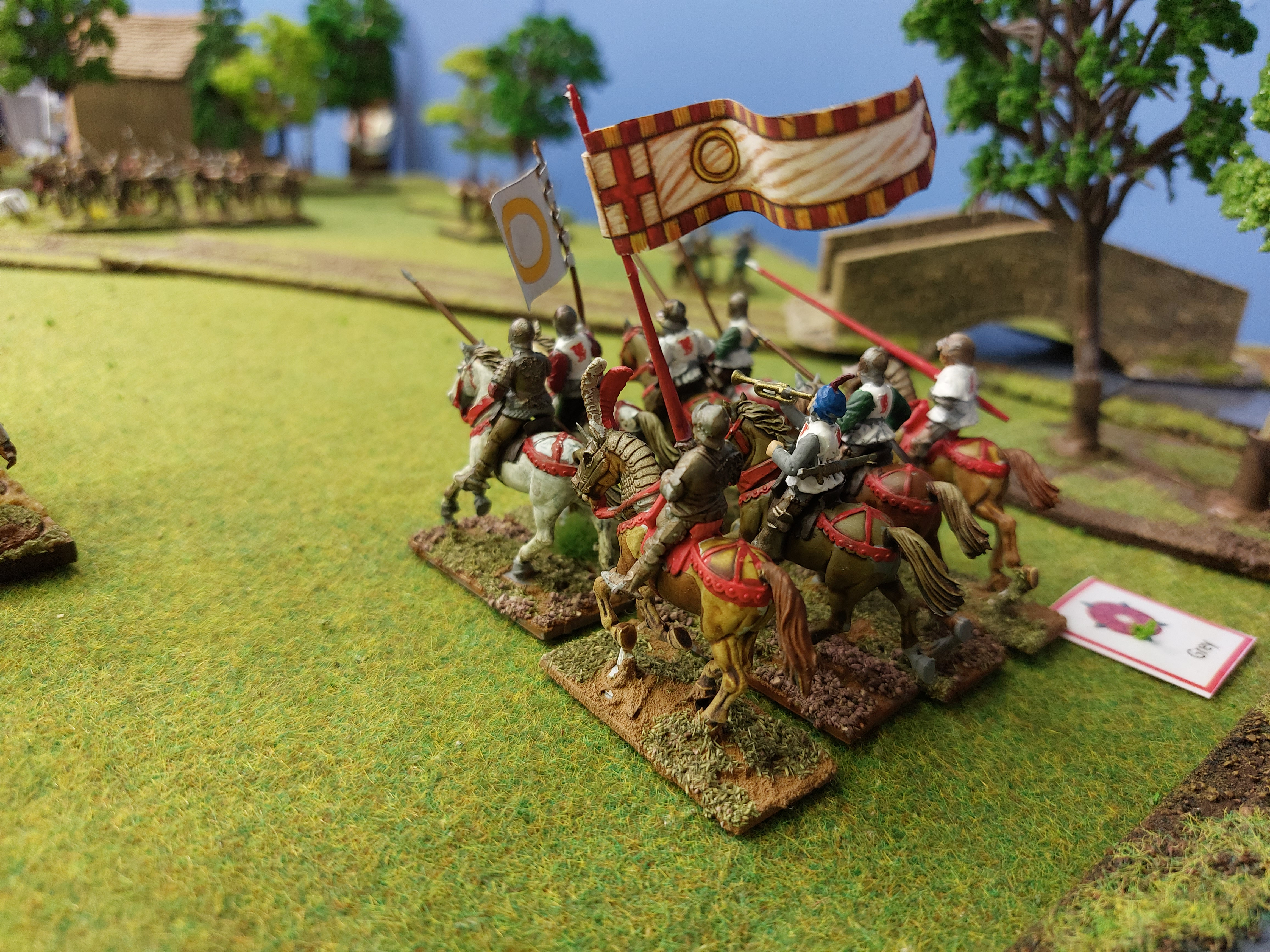 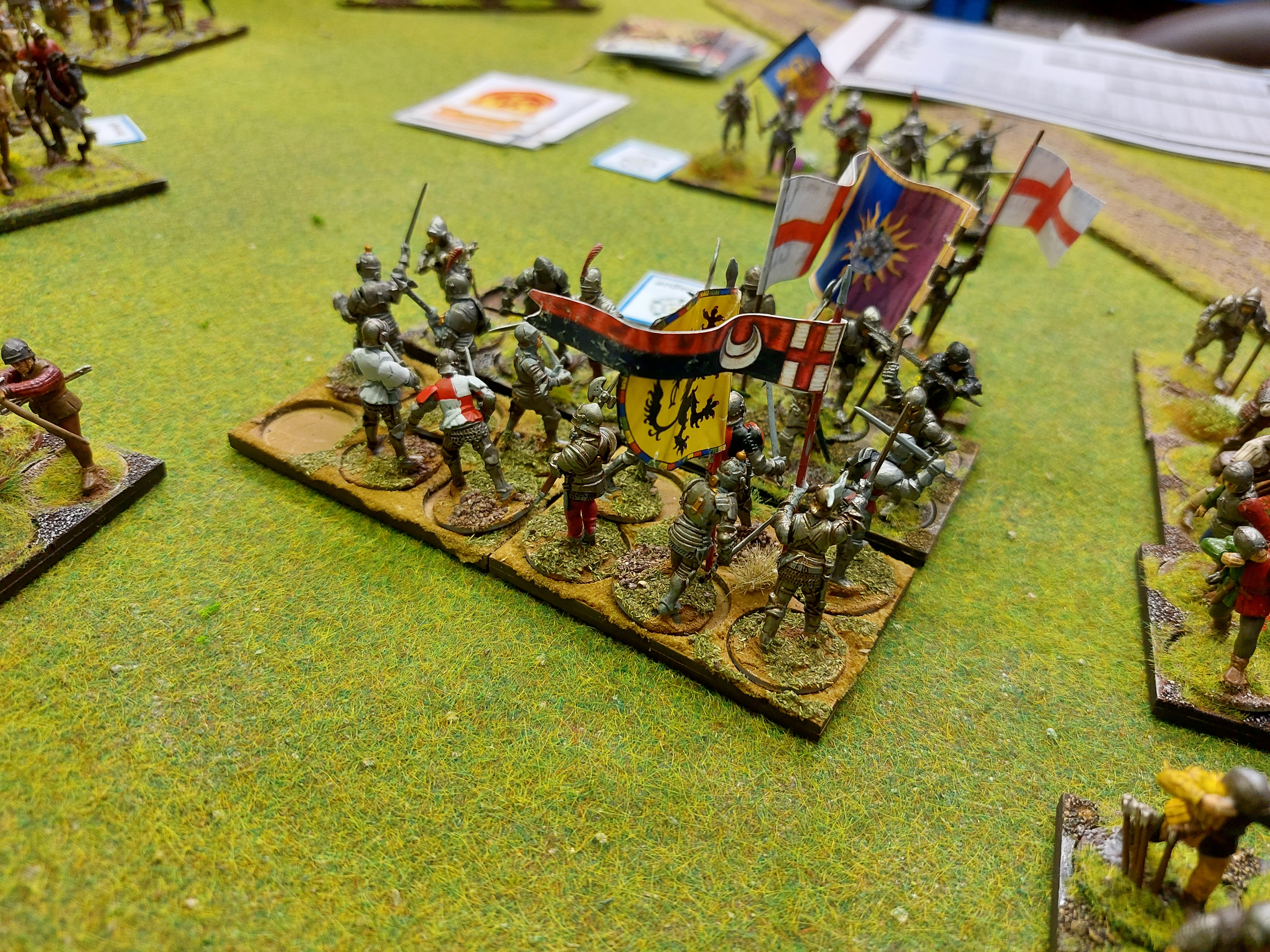 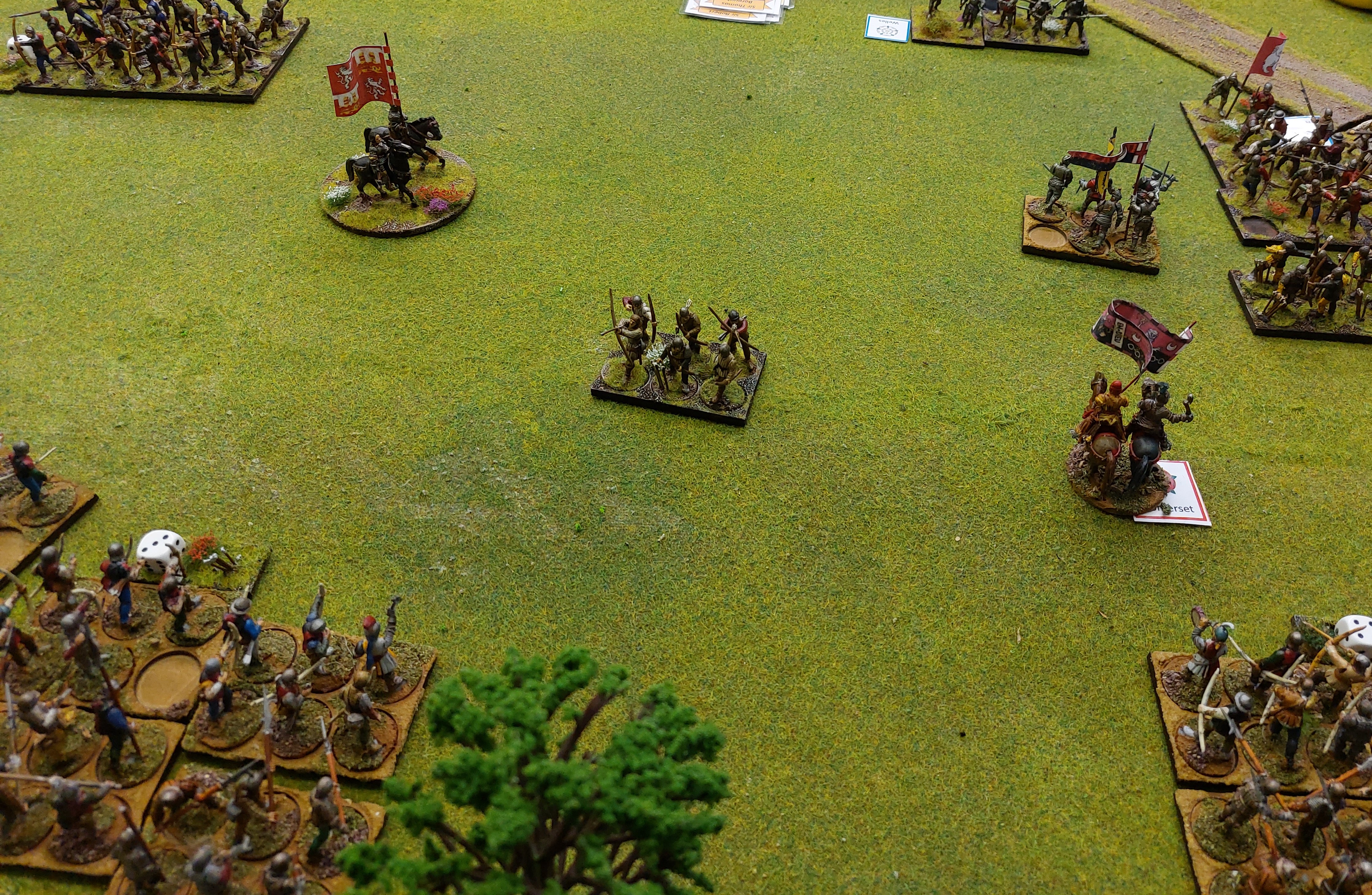 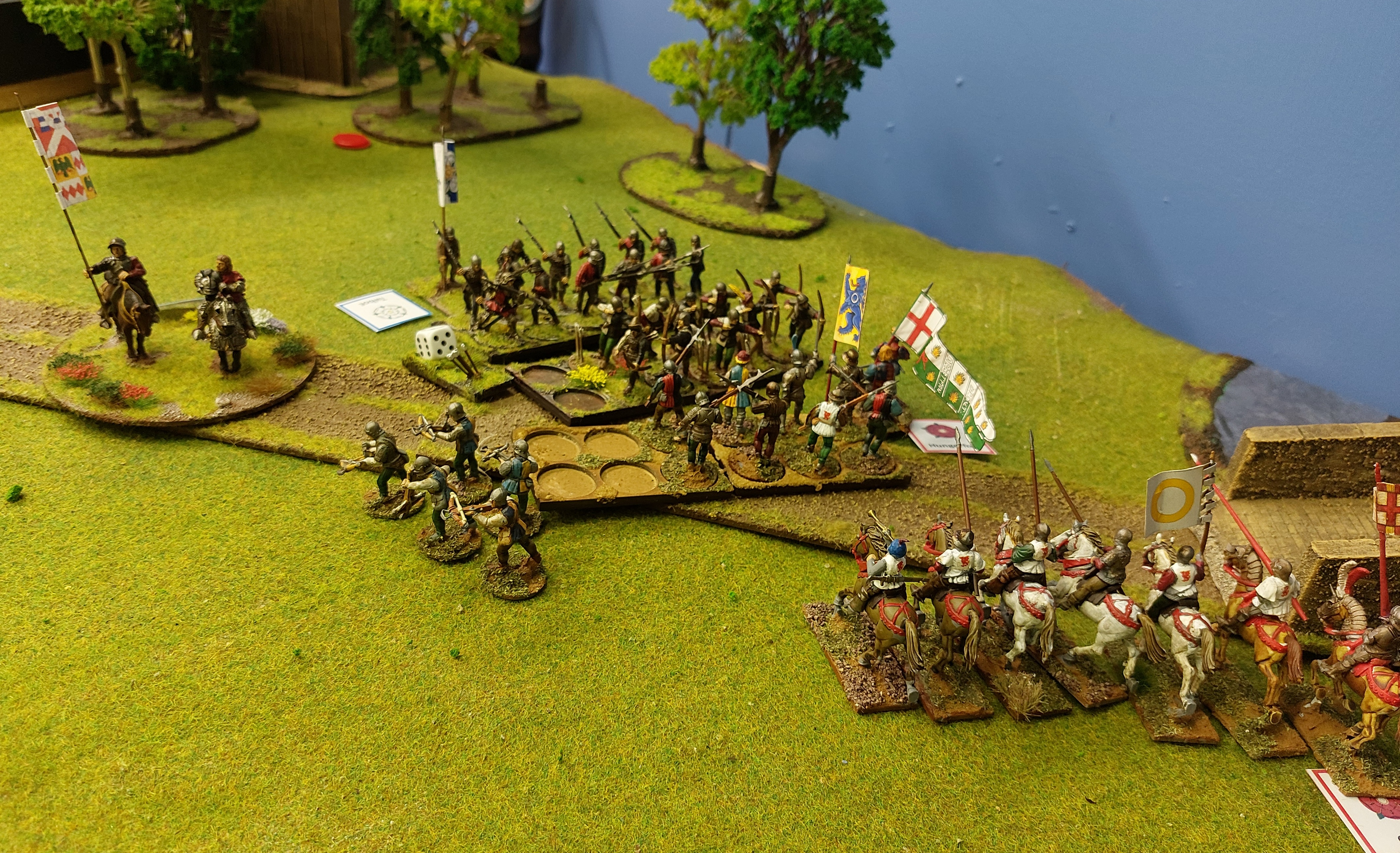 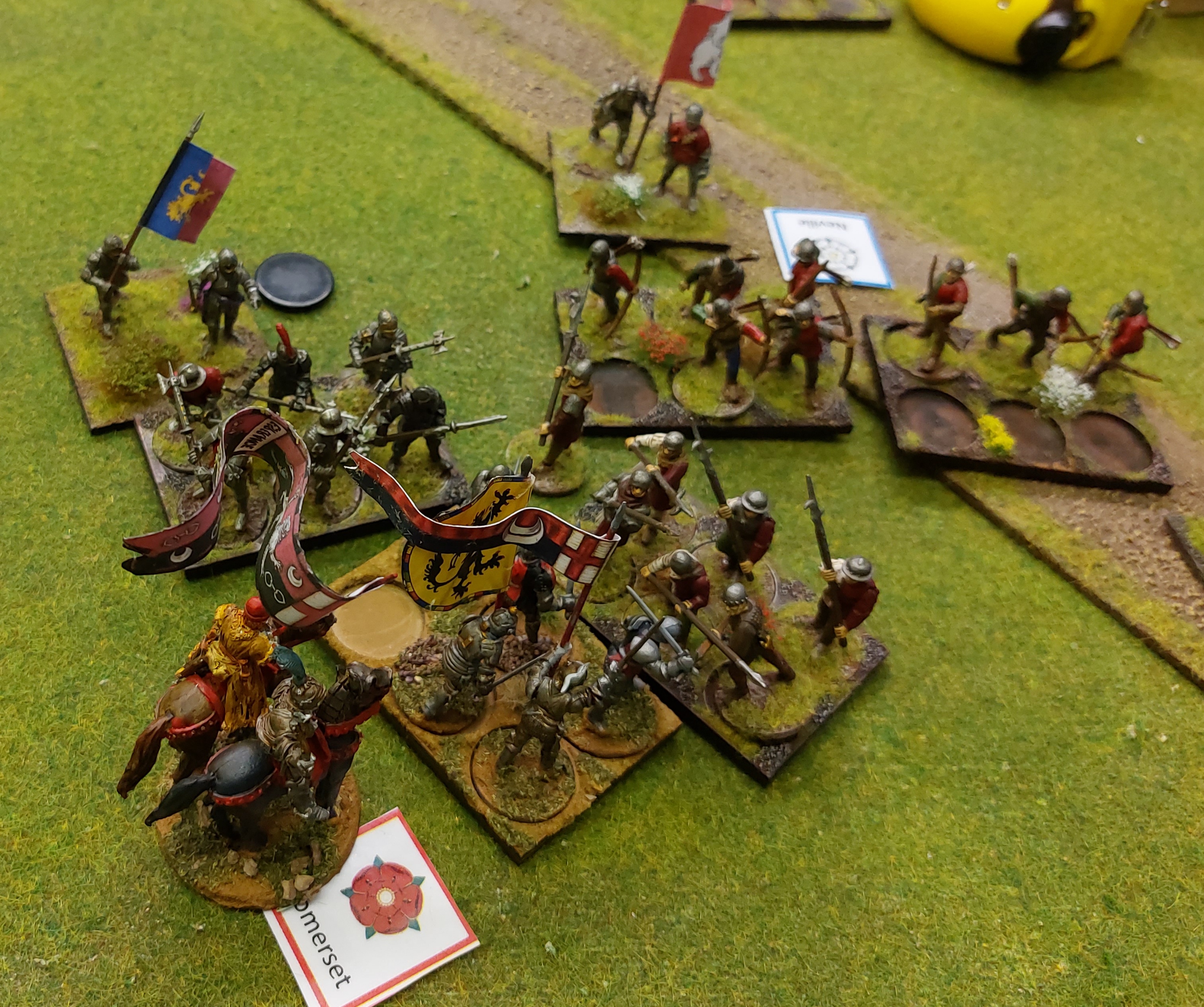 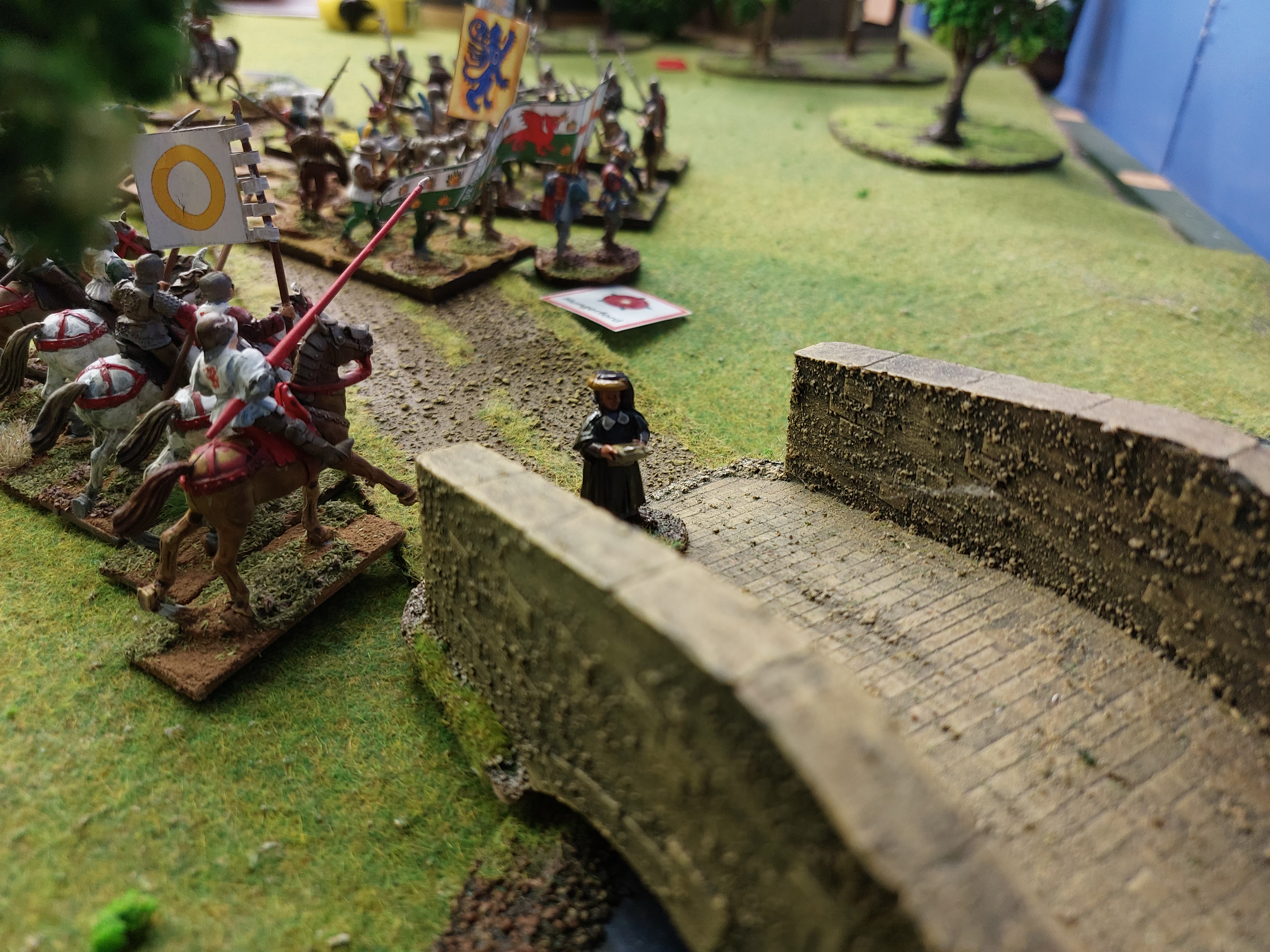 Once again thank you to Alastair for acting as chronicler in this action...
Posted by Eric the Shed at 11:42