G Troop is in trouble - A Plains War Skirmish

Delighted to report that the games are now back on in the shed full time and to make up for lost time I am now hosting a couple of nights a week.

The latest report to hit the blog see a return to the Plains Wars and a simple scenario called G troop is in trouble. Once again we used the rules laid out in the Black Powder v2 scenario. 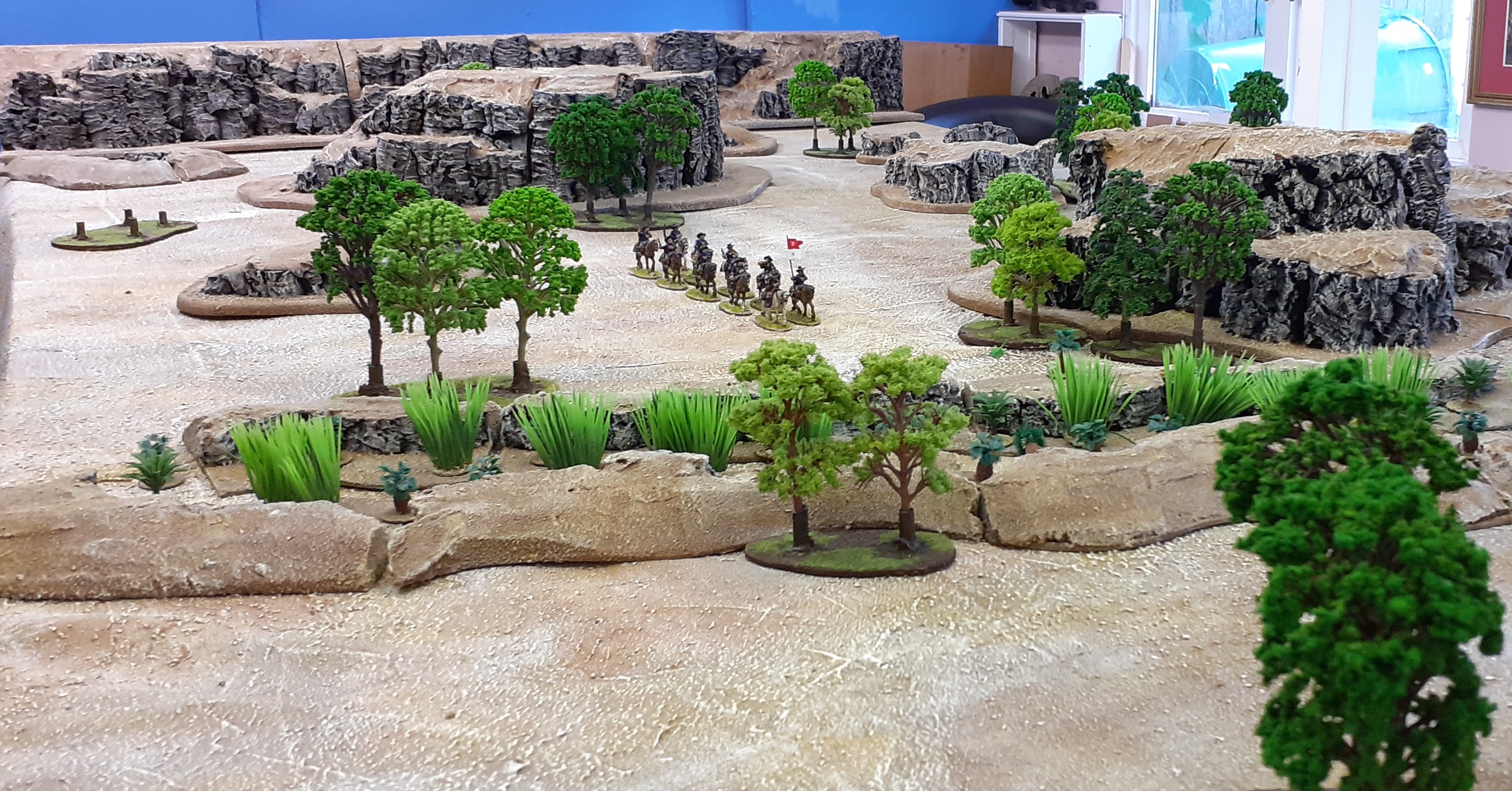 Whilst on route from Deadwood to Fort Wayne  G troop of the 7th Cavalry  was ambushed by a large party of renegade Indians. Unfortunately the wagon train was carrying the Fort Wayne's paychest and the Soldiers want their money. Fortunately a rider in the column escaped and informed the Fort Commander where the ambush took place. It is understood that the column’s horses have been driven away and that the remnants of G troop are facing a massacre unless help arrives.

Captains Kestrel and Captain Tennents have been tasked with retrieving the paychest and rescuing what remains of G troop. Both Captains decided that in order to ensure success they would approach the Wagons from different directions.

Each troop has its own officer/nco and has a command rating of 8.

The troops will enter the table on a successful command roll – one troop may come on with a roll from the captain.

Each of the three troops is commanded by one of the Captains – these have a command rating of 9.

The Captains can perform one of following

Captain Kestrel is an aggressive individual prone to making bold yet sometimes foolhardy decisions in the fields. He is not the best Leader and as such any rally orders are commanded with a -1 penalty. However he commands a degree of loyalty from most of the men and as such any follow me order is done with a +1 modifier. Captain Kestrel adds +1 die to the HTH in attacks.

Captain Tennents is a more sensible chap with a knack of being able to delegate orders efficiently and succinctly to his men. As such any Brigade Order receives a +1 modifier. Captain Tennents adds +1 to HTH rolls.

The US Cavalry will win the game if they can

The Natives  - John and myself

The Natives are commanded by two Brothers – Lone Rabbit and Walking with Snails. These Chiefs are out to inflict as much damage on the Blue Jackets as they can. They are not particularly interested in the pay chest.

Each Warband is activated by the random table unless issued a follow me order by the chiefs (comm rating 8). The Chieftain adds +2 to the HTH roll. Should the Indian unit with an attached unit be routed it is assumed the Chieftain dies. No replacement Chieftains are available and the loss of a chieftain counts as one unit to the break of the Indian forces.

The Indians will win if

At the start of the game the two Chiefs have two foot Warbands each and two mounted Warbands. Two of the foot Warbands will be within 9” of the wagons in light cover.

The other two Warbands can be placed anywhere on the table but must be at least 24” from the wagons. The Mounted Warbands will be positioned along the edge of the table.

Each turn the Indian generals must roll a d6 on a 6 a further mounted Warband will appear. Should they fail to receive one that turn a +1 modifier (cumulative) is added each turn until the Warband appears

Within a turn both Cavalry commands were on the table pushing towards G troop.

Swiftly one troop dismounted and poured carbine fire into the outcrops driving back the locals.

A brave warband charged the barricades - driven back by determined resistance 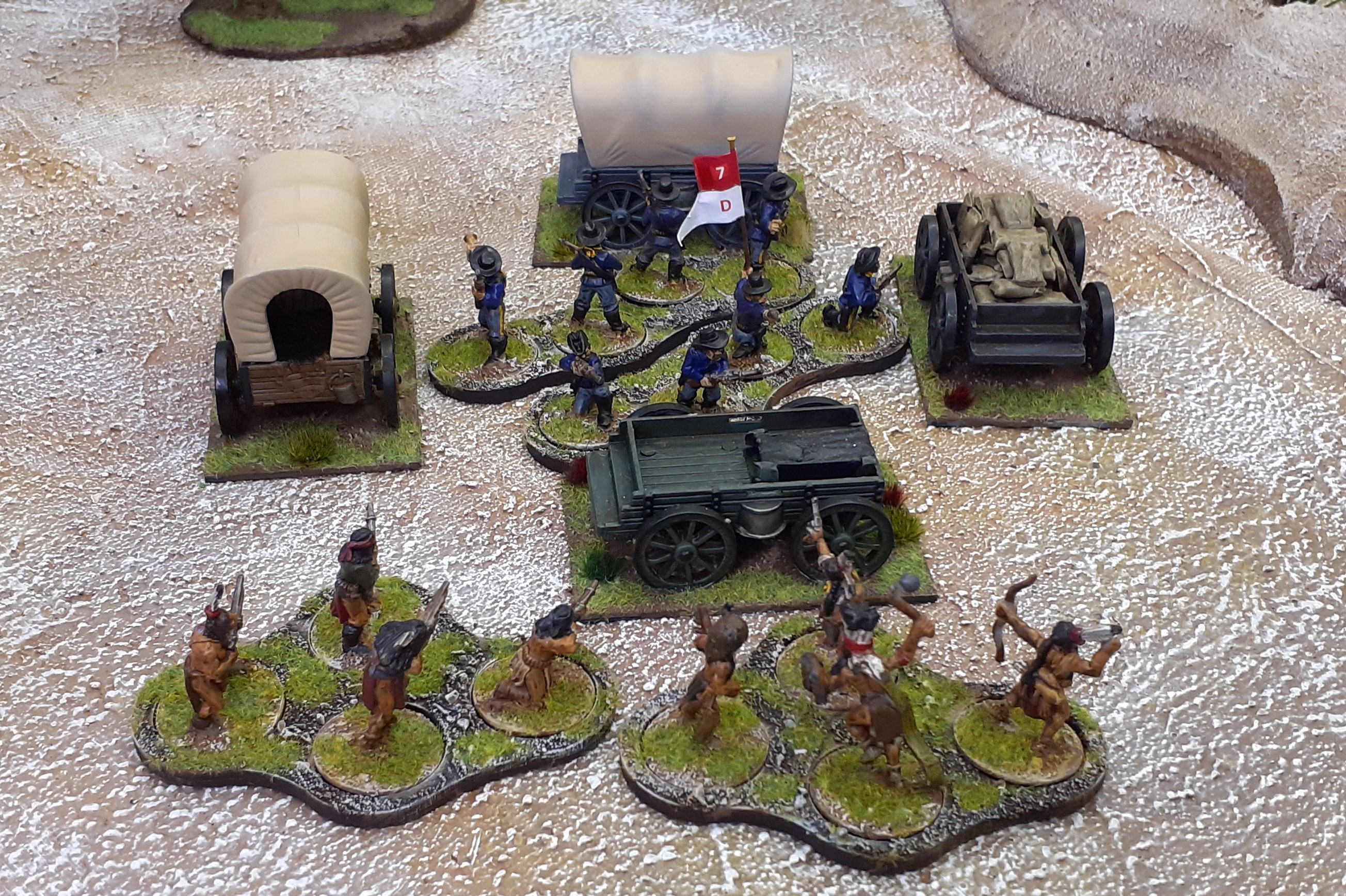 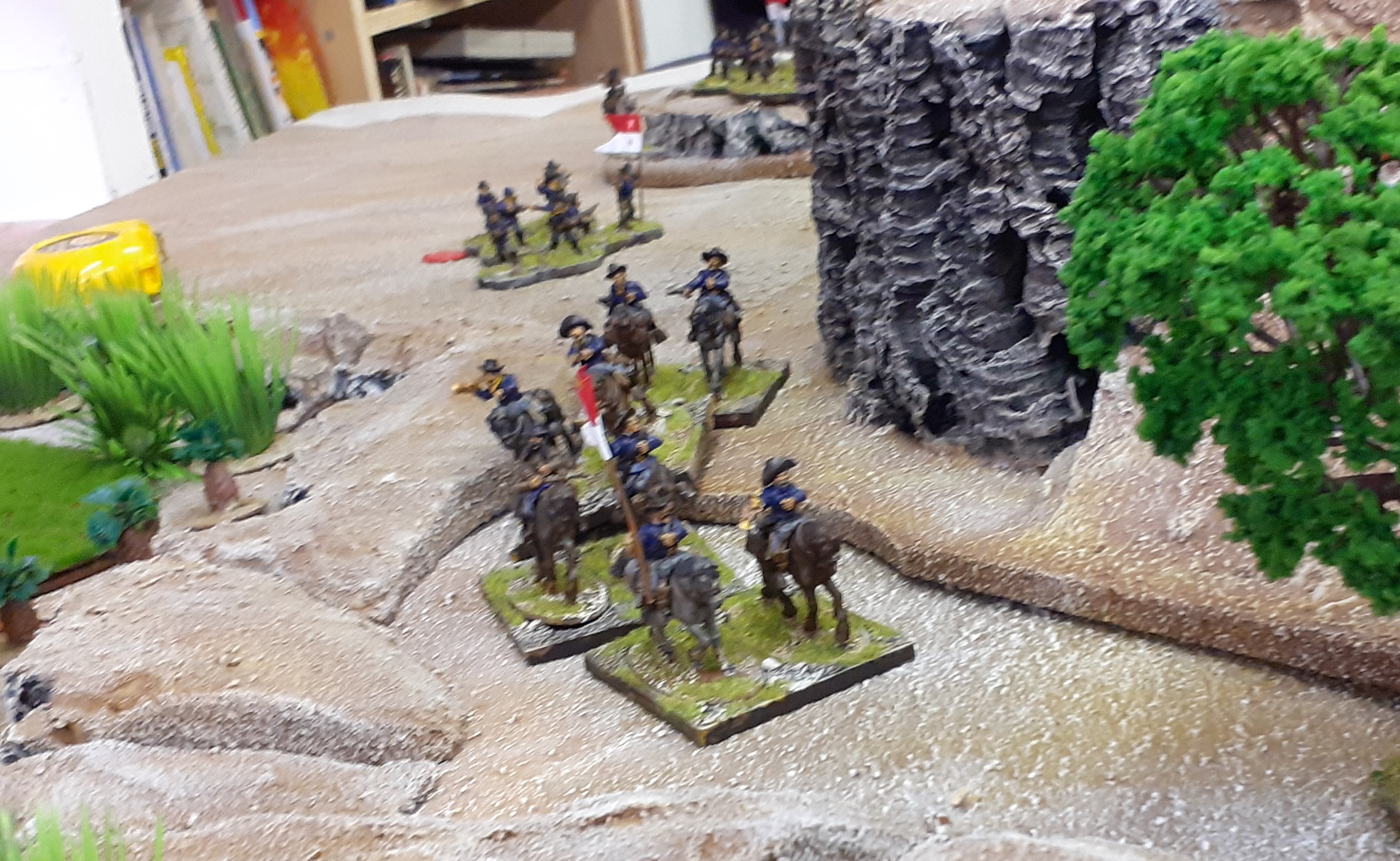 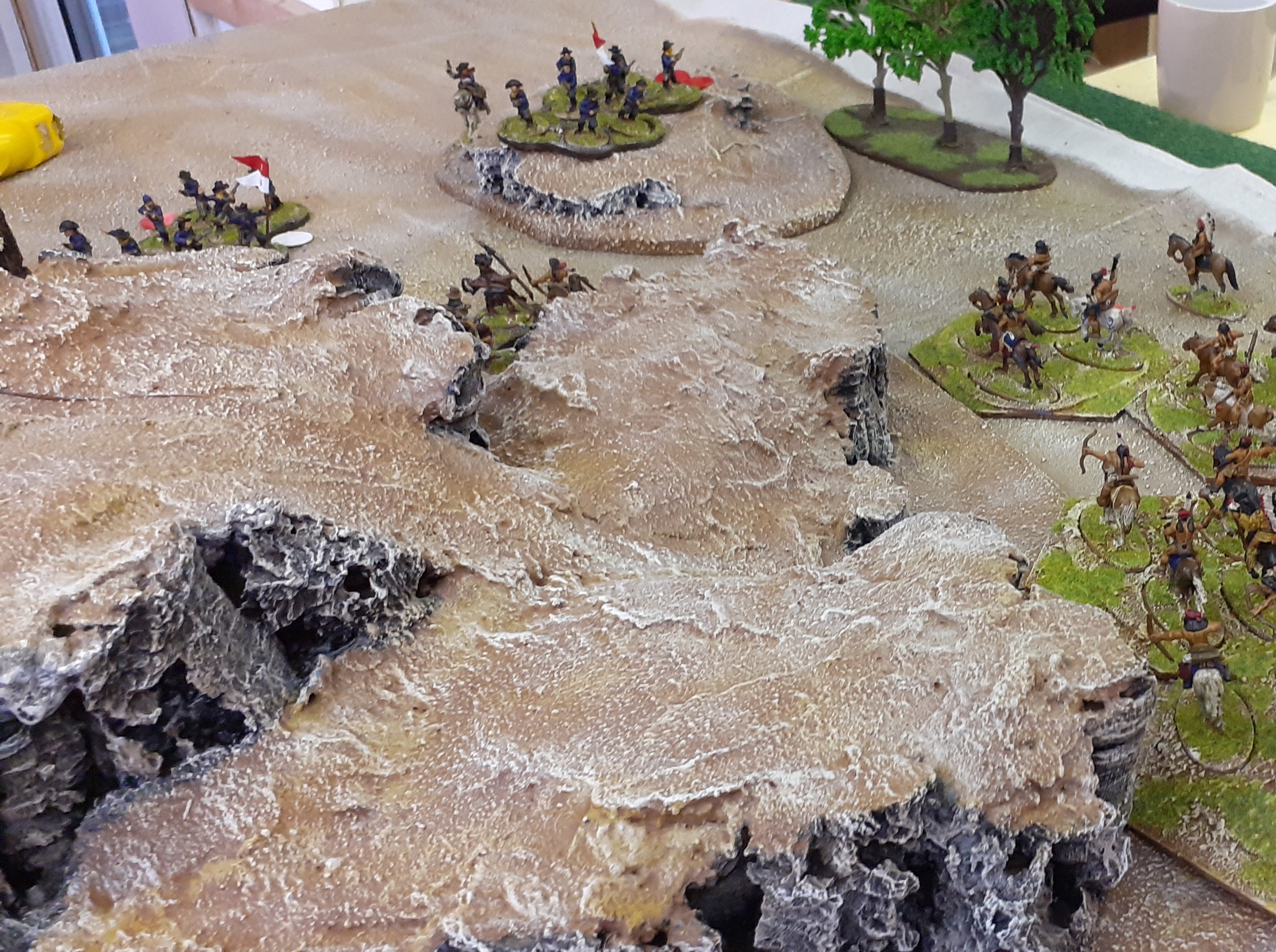 Falling into disorder the Cavalry minus their mounts awaited their fate.

More Indian warbands sallied forth on to the table 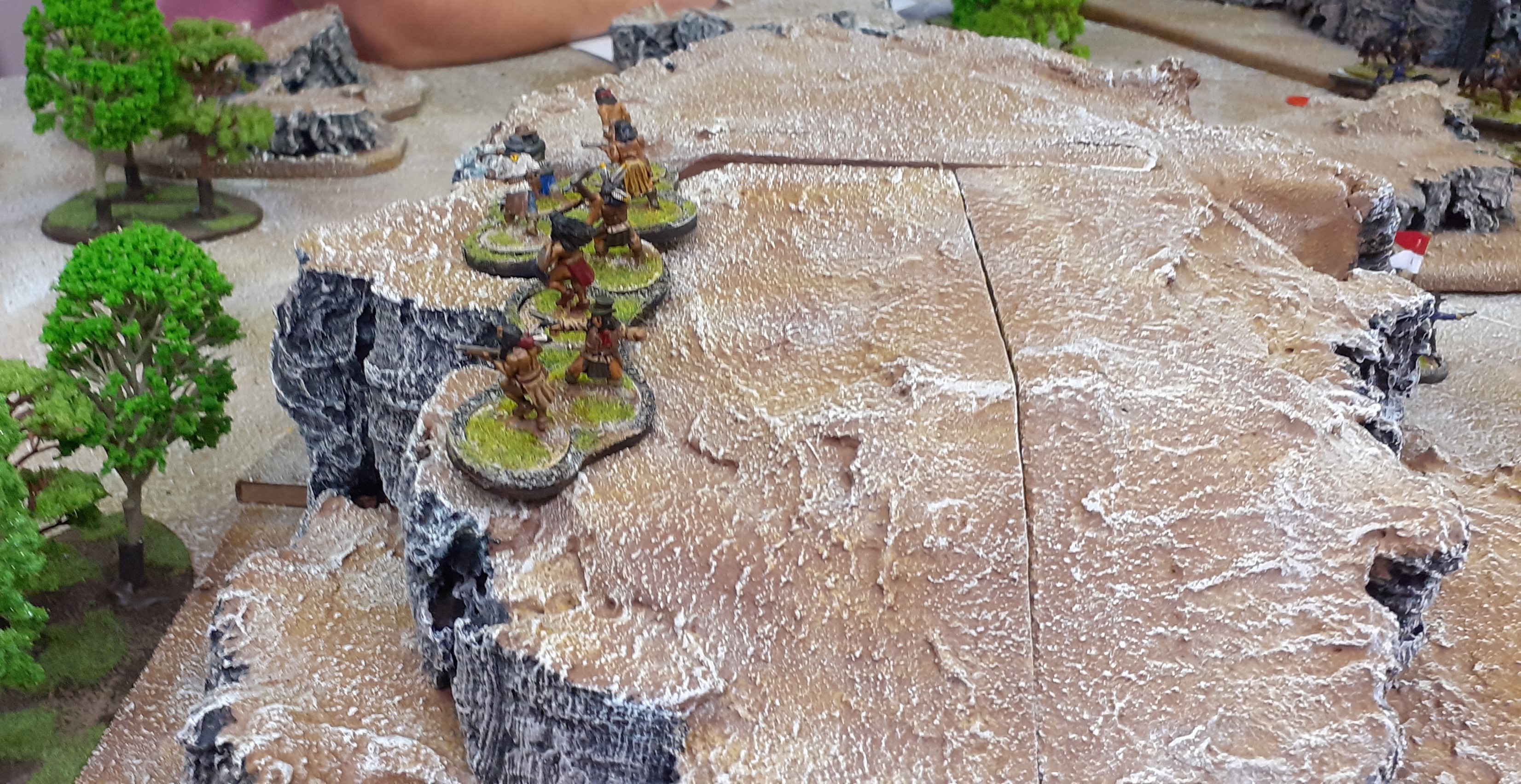 More warbands joined the fray and charged the lead patrols 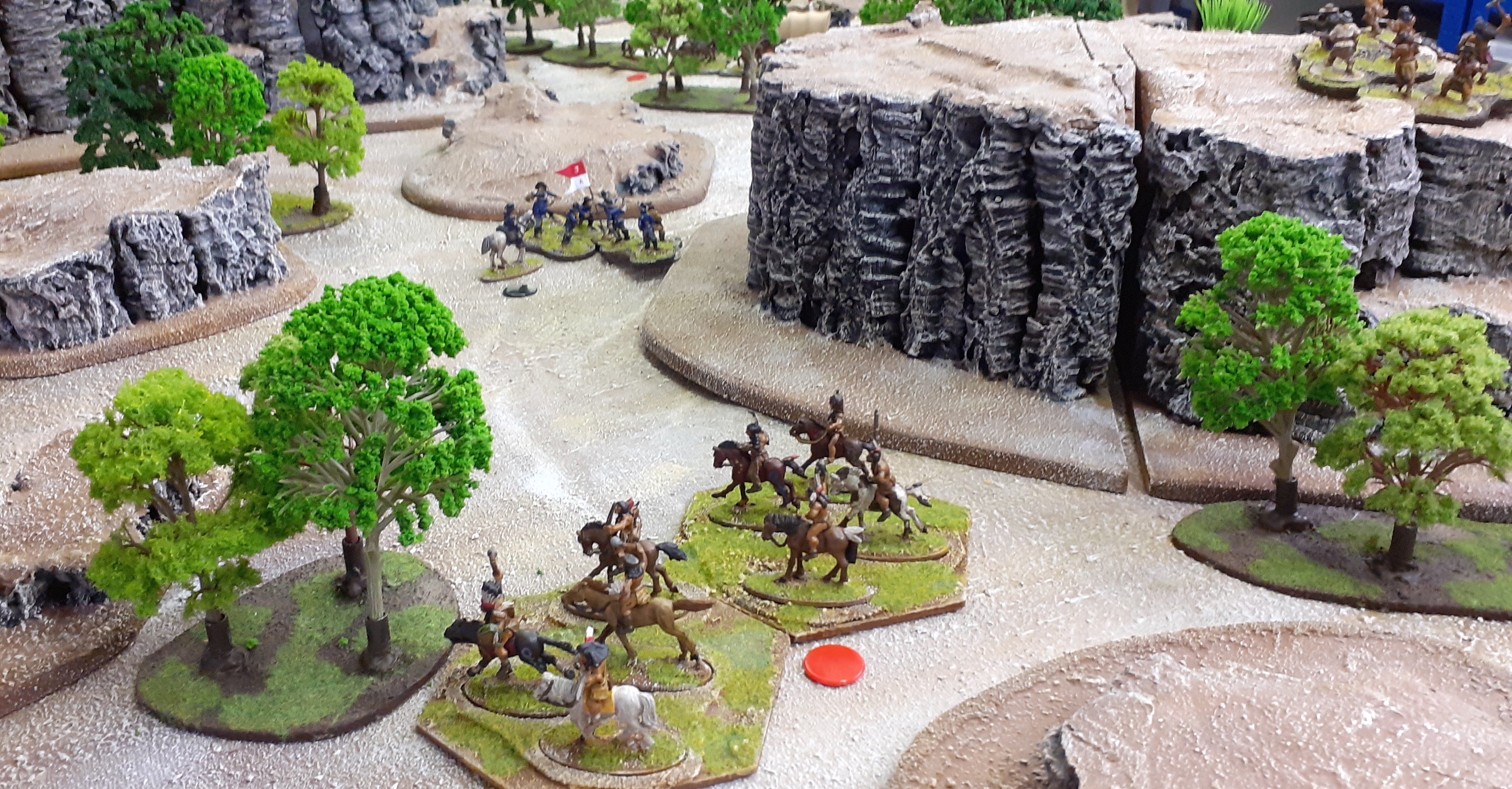 One patrol could now see the beleagured G troop 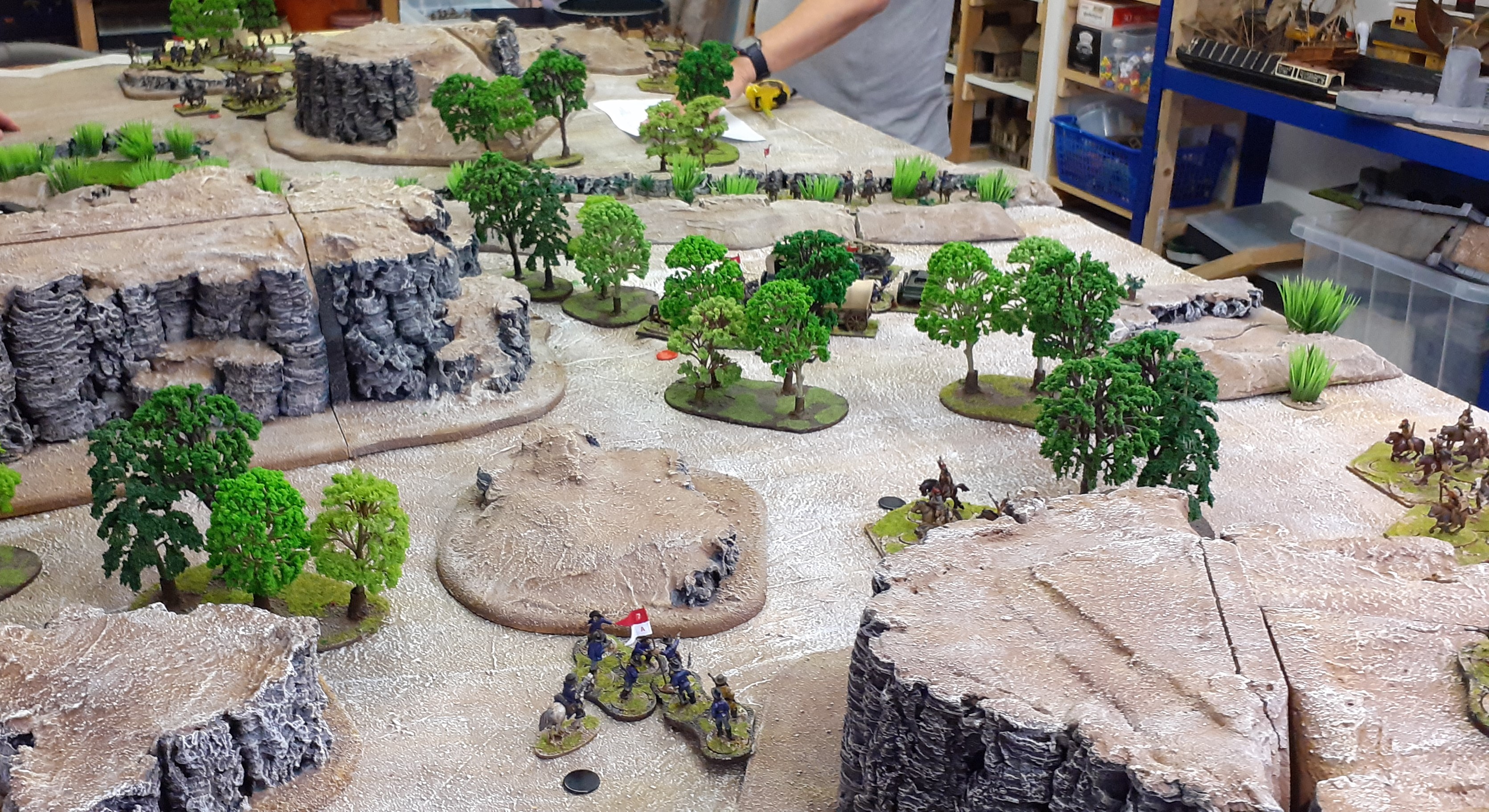 It was at this point wearealised 4 of the six troops were now shaken and with G troop overwhelmed the remnants of the cavalry force had to retire - a victory for the Natives.
Great fun - it played swiftly and the random mechanic for movement of the natives works a treat...
more soon
Posted by Eric the Shed at 18:38