The Battle of Piltown - Set Up & Action Report

The Battle of Piltown

The Battle of Piltown is a rather unique battle in the Wars of the Roses as it was the only engagement fought in Ireland. 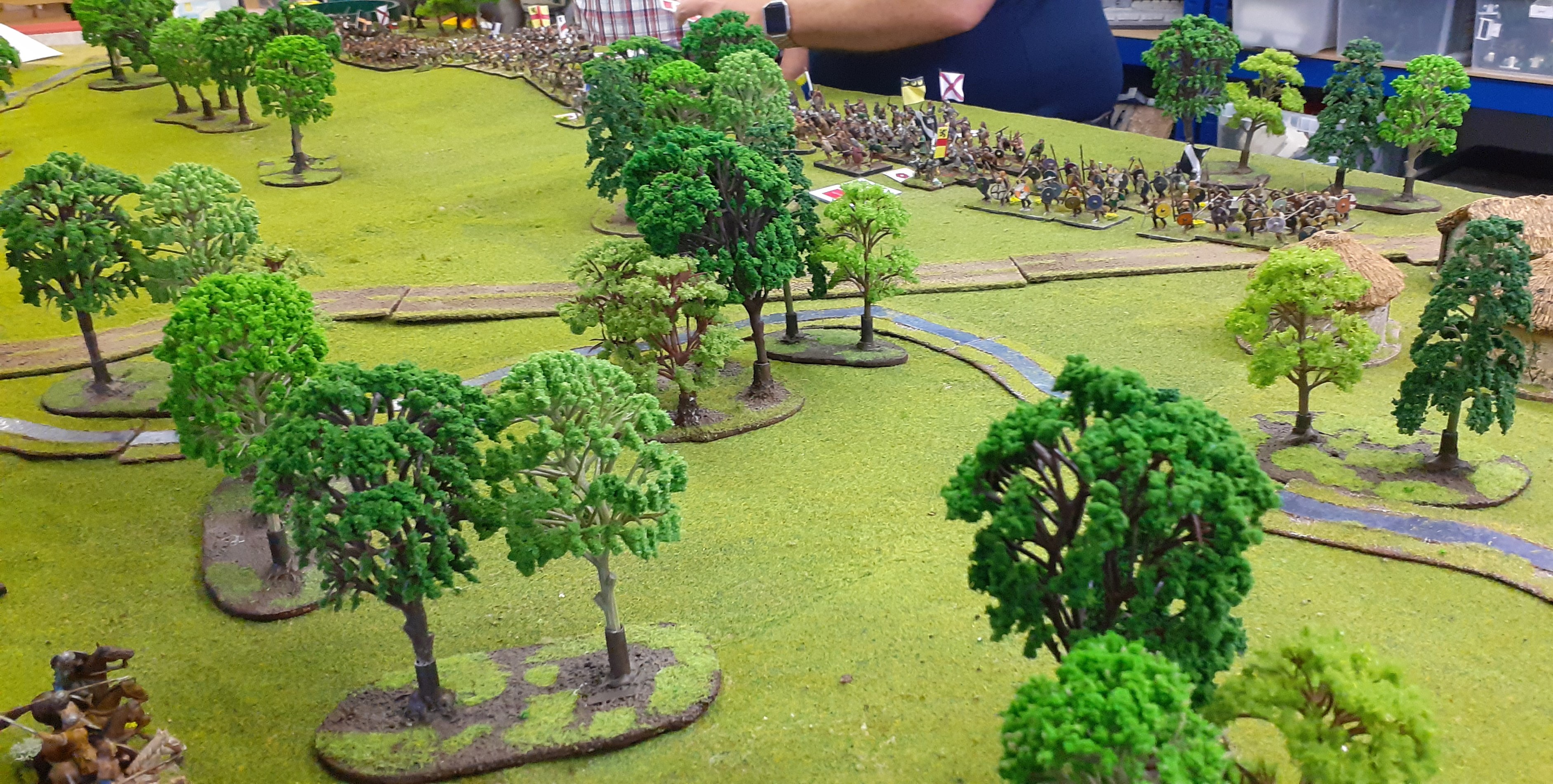 The Battle itself took place at Piltown, in County Kilkenny in 1462. This is in the south east of Ireland and approximately 20 miles from the major town of Waterford. The area is dominated by the river Suir which runs south into Waterford. The river Pill (which gives Piltown its name) is a small stream that flows into the Suir from the North. 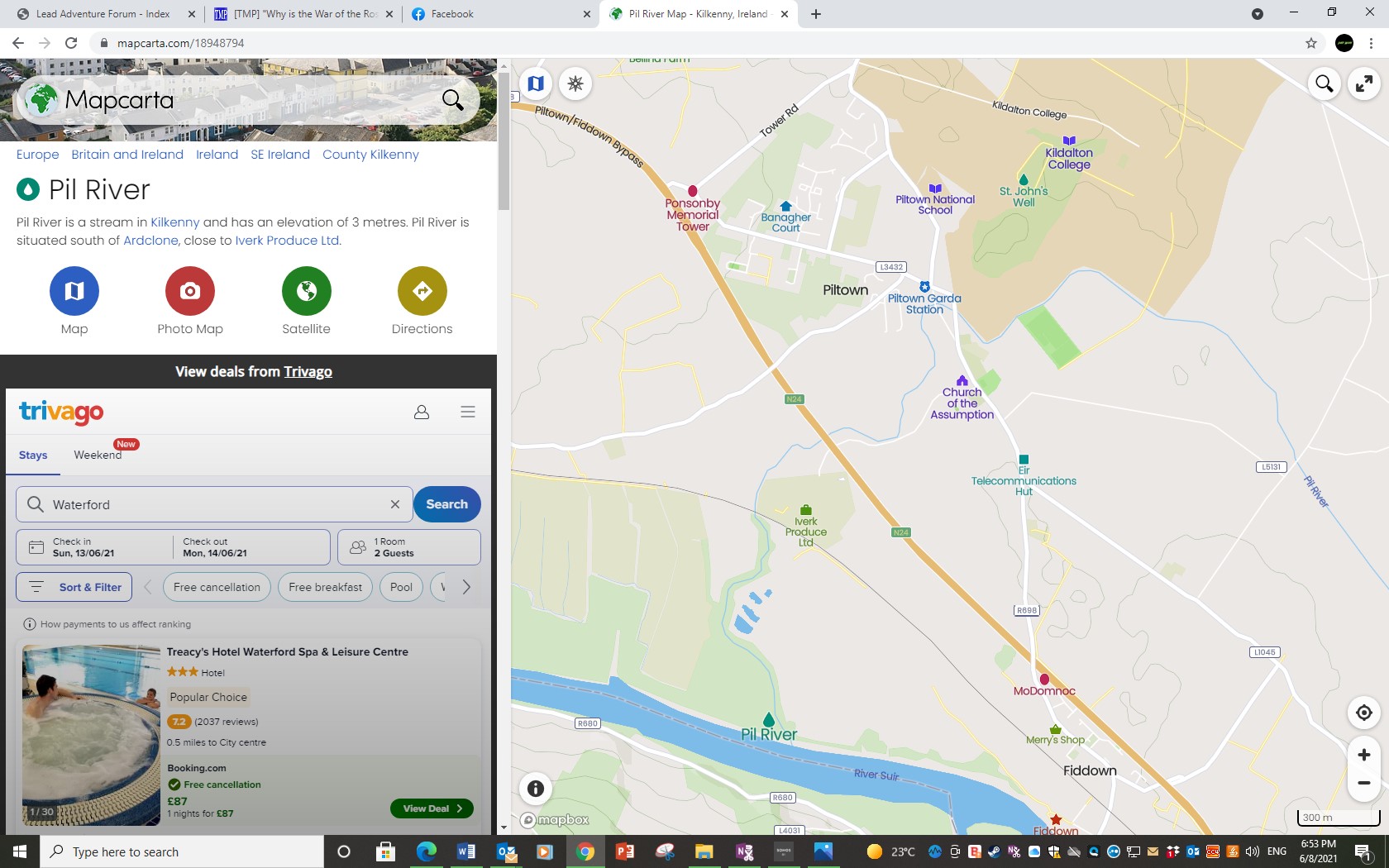 According to one source it is suggested that local memory claims that the Battle of Piltown was so violent that the local river ran red with blood, hence the names Pill River and Piltown (Baile an Phuill – Town of the blood). This would assume that Piltown either did not exist at the time or was renamed after the battle.

The Battle itself was fought between two leading Irish Lords Thomas FitzGerald, 7th Earl of Desmond, head of the government in Dublin and a committed Yorkist, and John Butler, 6th Earl of Ormond who backed the Lancastrian cause. It ended in decisive victory for Desmond and his Yorkists, with Ormond's army being driven from the field into hiding. 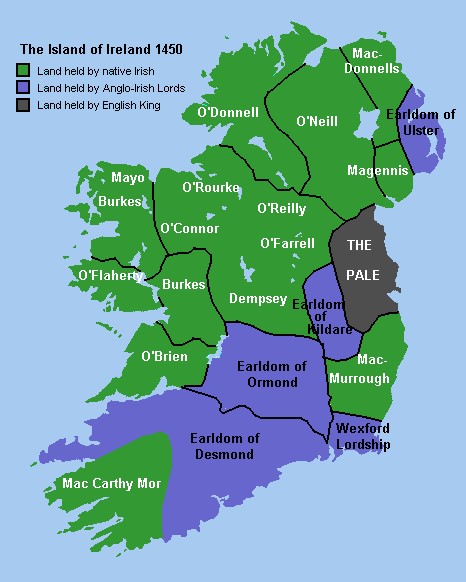 I have found a great link to the background of hostilities between Butler and Fitzgerald and is worthy of a good read to get more background on the events in Ireland. The link can be found here

To date I have found no records of the size of forces present at Piltown and very little in the way of named combatants. From what I have gathered it was very much a family affair between the Butlers and the Fitzgerald’s and that casualties ranged from 400 to around 1000 men on the day.

These casualty figures are still significant and working on the basis that 20% of the forces were lost in combat this would give total combatant numbers around 2000 to 5000 men. On the basis that  there was no evidence one side was numerically stronger I will settle on a simple calculation that each side fielded 2500 men each.

These ‘armies’ would still be commanded in ‘battles’ and would be primarily a mix of infantry types.

Using a ratio of 1 figure represents around 10 men this would give both sides a force of approximately 250 figures. As stated so little is known about this battle this is all pure conjecture.

Putting together the orders of battle was relatively straight forward. Each side would consist of ten leaders (including the Earls acting as Battle commanders) leading their troops. Prior to the game I contacted Andy Callan the author of NMTBH and he kindly provided the provisional stats for the Irish troops that would take part. These include Gallowlass, Formed Kern companies etc. Given these are all going to be published at a later point in time I elected NOT to provide these so as not to infringe any copyright.

Both sides fielded mainly Irish Kern companies with a sprinkling of Gallowglass, a couple of men at arms units and light cavalry. Both sides were evenly matched in the number of units.

Given that we have only about 100 Irish Kern figures we pressed into action a large number of Saxon light infantry to double up as Irish fighters. 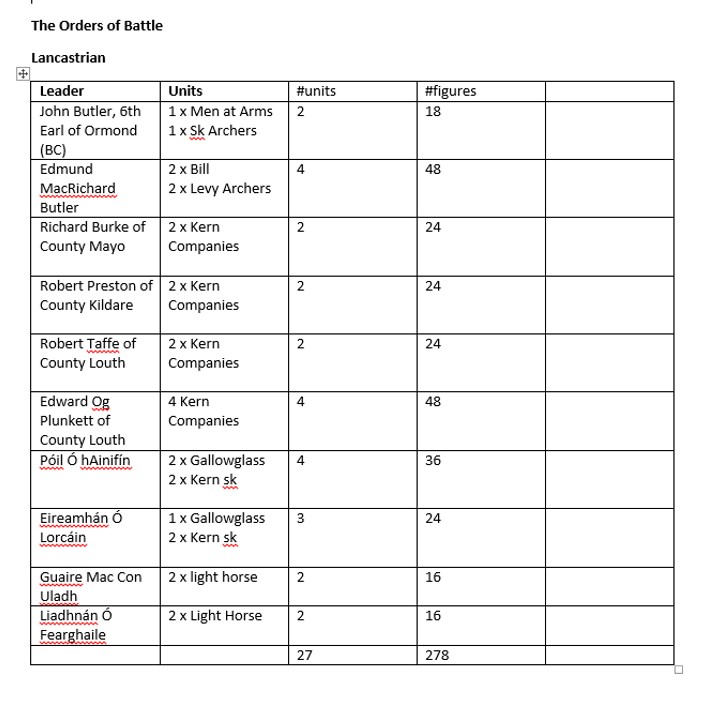 We were joined in our game by Hu Rhu of the Lead Adventure Forum - he brought along a number of units including some Irish Commanders. These were incorporated into the army lists along with a number of Gaelic Irish names produced through a fantasy name generator off the internet. 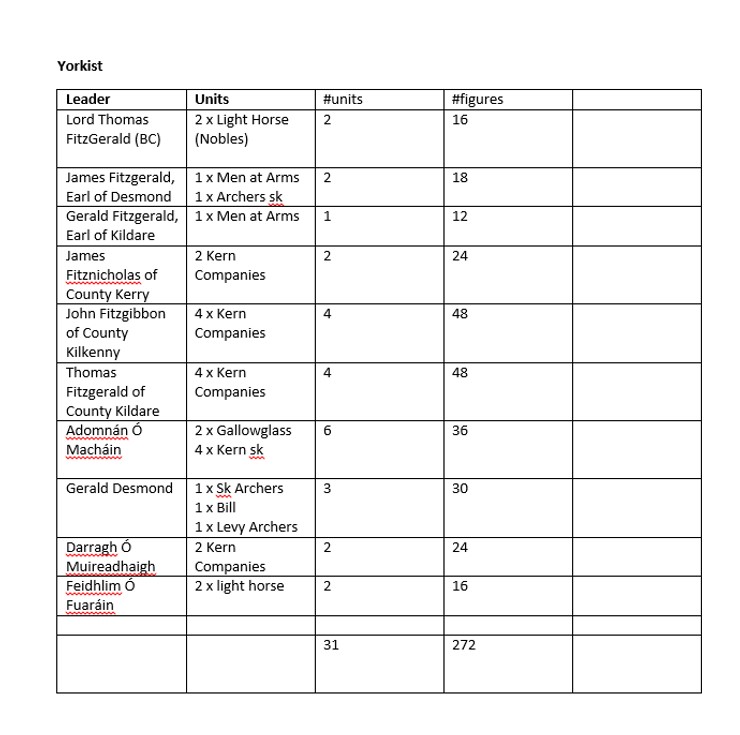 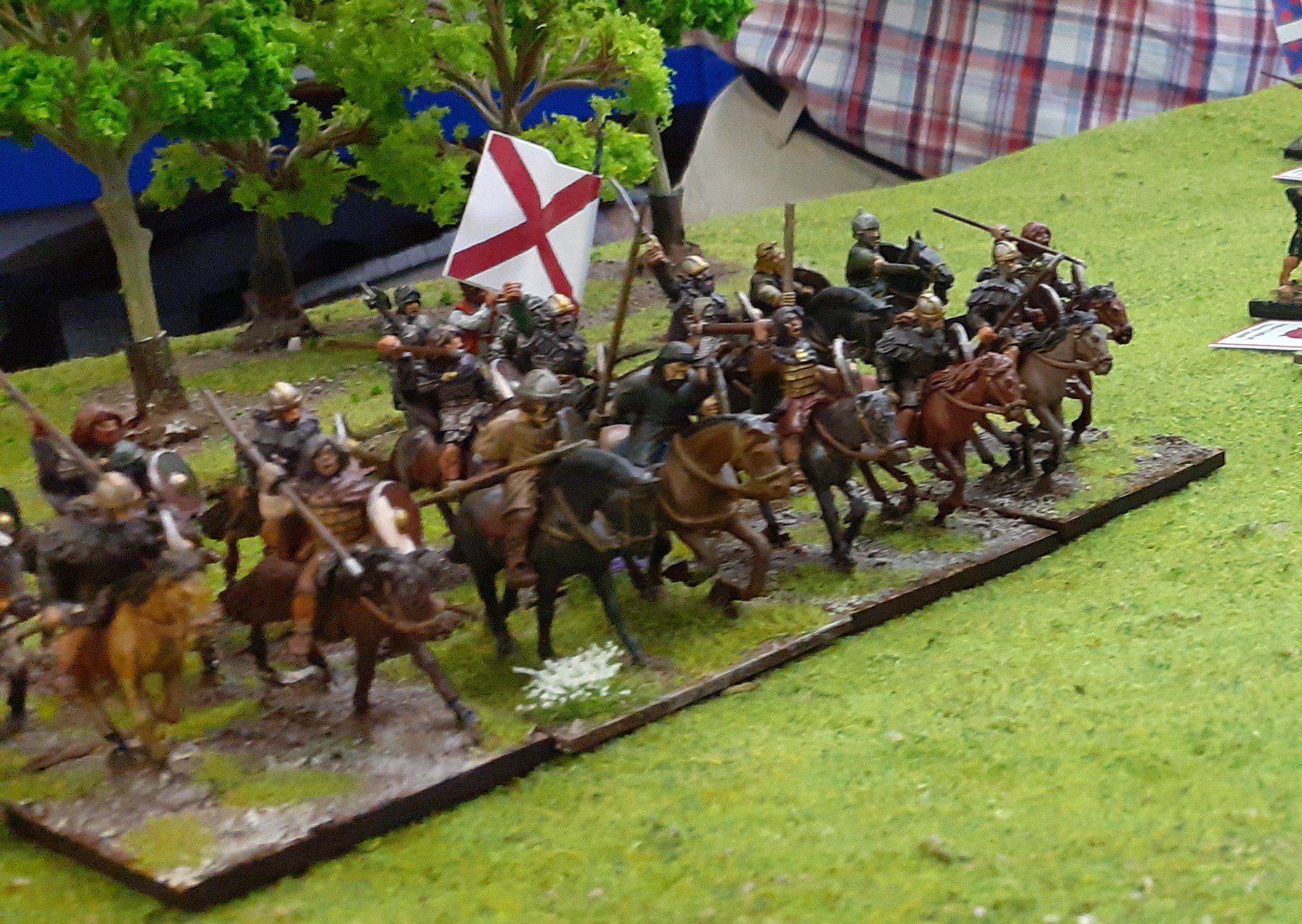 Irish forces under Yorkist command edge through the woodlands. 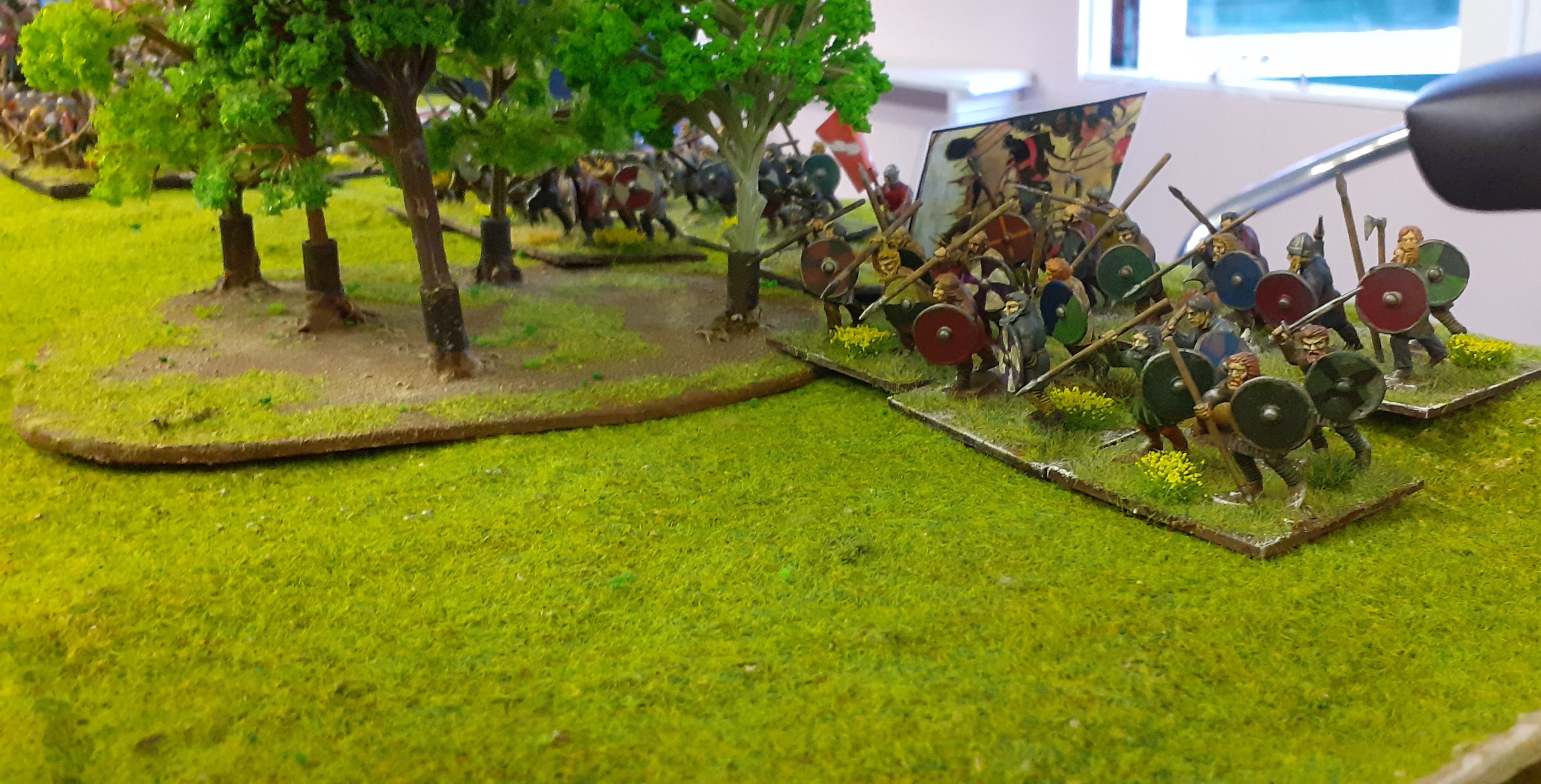 The Yorkist centre crosses the stream and await the onslaught.

Trees were scattered across the table - these were moved as and when necessary - just there for table decoration.

As the Yorkist right flank get closer to the river they halt - taking disarray by crossing the stream seems rather foolhardy.

With troops edging closer proceeding were opened by the javelin armed skirmishers. Neither side enjoying particular luck. 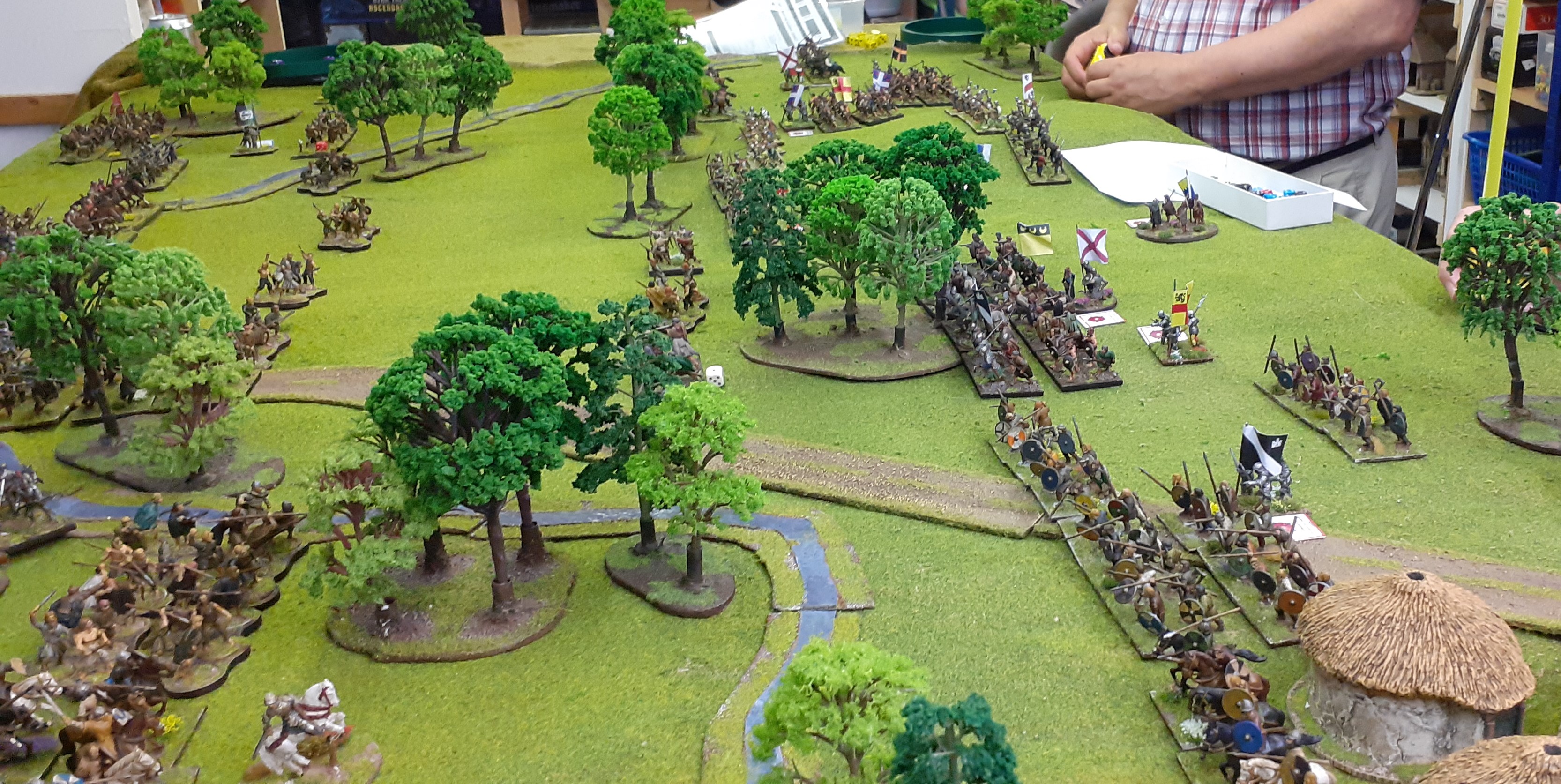 Eventually the Yorkist skirmishers were driven back 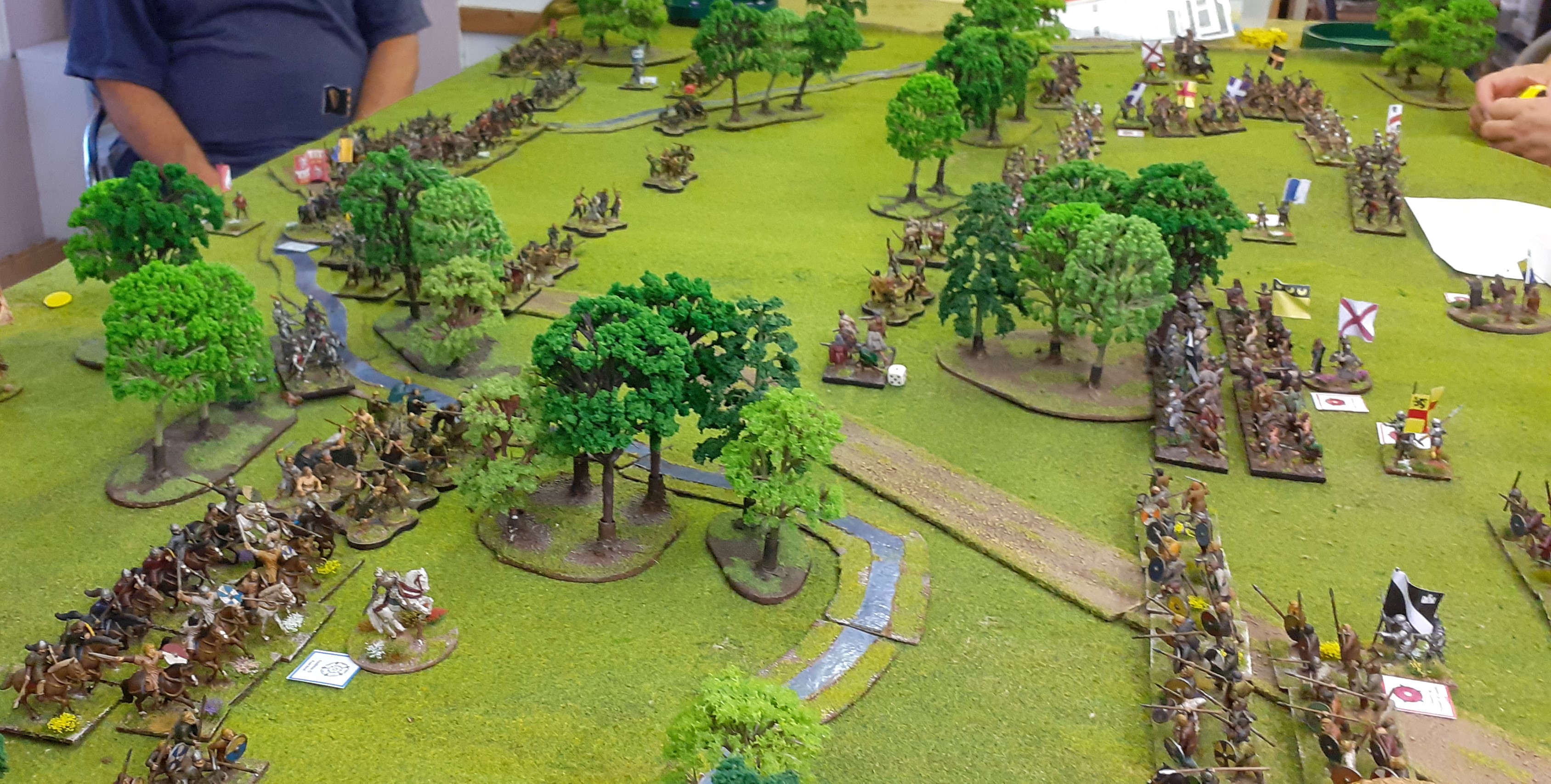 Units of Yorkist light horse charged the Lancastrian centre destroying their opponents (Levy bow) and causing a number of Irish Kern to flee the field.

Despite this set back the Lancastrians pressed home in the centre

Neither side wanted to move across the stream at the settlement.

Across the other end of the table the Lancastrian horse pressed forward . 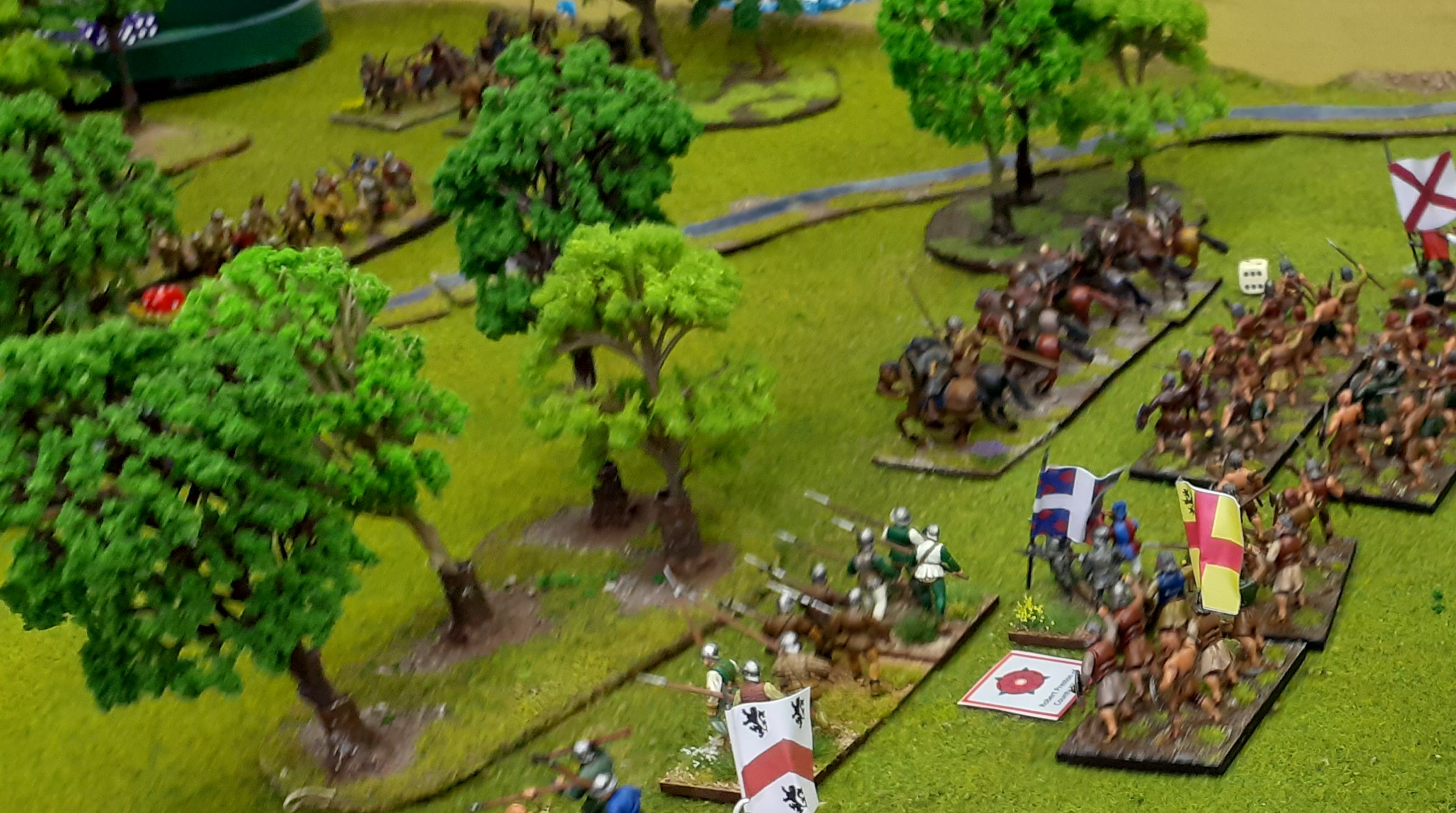 A major clash of arms appeared in the centre - once again the Yorkists seized the upper hand driving back their enemies.

Melees were breaking out across the field - The Lancastrians keen to use the heavy centre to crush the Yorkists. 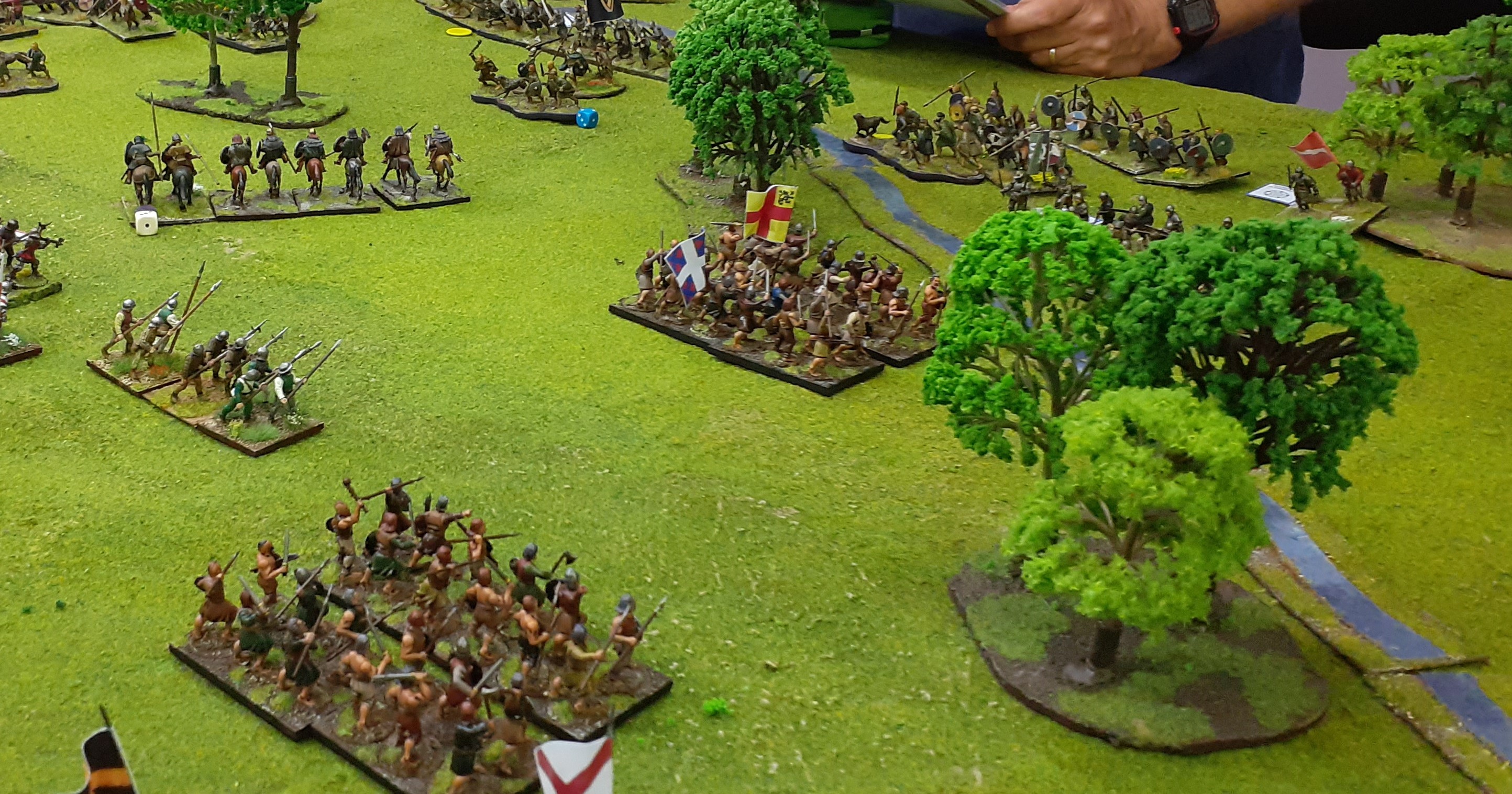 Yet again they faltered in their advance ...

The Yorkists piled on the agony - more Lancastrian Irish fled the table. The day was won by the White Rose.

Another fun game and an absolute nightmare for the Lancastrian commanders - probably half of all break tests resulted in routs.
A very different game using a variety of new troop types, significantly less archery and most of the chaps on the field had little or no armour. Those that did made their presence known.
Back to England next time..
Stay safe
Posted by Eric the Shed at 10:12