Now if truth be told this game was actually fought on Saturday 22nd May but given it was played out of sequence with the series of WOTR battles and it was an all day event it has taken some time to put this post together.

As per all previous battle reports this is in two parts with the first outlining the game and the second will tell all of our refight.

The Battle of Towton was fought on March 29th 1461 during the Wars of the Roses and if the chronicles of the time are correct this was the bloodiest battle seen in the British Isles.

It is estimated that over 50,000 men fought for the two sides for a full day in the middle of a snowstorm. Edward, now Duke of York, following his fathers death at Wakefield was victorious and ensuring his path to the crown as Edward IV.

As a prequel to the battle their was an engagement at Ferrybridge (see here) and as the Yorkist forces approached the Lancastrian army they soon discovered that they were outnumbered. Yorkist troops, most notably those under the Duke of Norfolk had yet to arrive.

With a strong wind in their favour the Yorkist archers decimated their opposite numbers forcing the Lancastrians to move forward quickly to engage. In blizzard conditions the battle raged for 10 hours with both sides refusing to give quarter. It wasn't until late in the day that the arrival of Norfolk's troops swung the advantage in favour of the Yorkist cause.

The ensuing rout of the Lancastrians gave Edward the victory and revenge he craved.

Refighting Towton as a Wargame

From a wargaming perspective there are not many subtleties in this game. The terrain was straightforward with neither side really enjoying a strategic advantage, the Lancastrians hold the advantage of numbers and the Yorkists might expect reinforcements at some point in time during the game. What did effect the battle most certainly was the impact of the weather, notably the wind and snow conditions. These two factors needed to be considered.

The wind would impact range of the archery units and the snow conditions would affect both command and visibility on the field.

As per previous games we are using the NMTBH rules designed by Andy Callan. Originally designed for small skirmish games of the period we have modified these for our bigger historic refights. To keep things simple we have dispensed with both veteran and levy units and introduced the concept of battle commanders. These are level three commanders who can not only command their own retinues but also any other in range friendly units on the table.

Given the number of figures in our refight (best count 1500+) we elected to use dice to track casualties against on table units.

Please note the orders of battle are listed at the end of this post. As with all our games I have been using the army lists (converted for NMTBH) from the excellent Poleaxed series of reference books.

The field of Towton is rather bland - the actual battle was fought in a shallow valley bordered by the London road in the East and the Cock Beck in the west.

The table we fought on was 5ft by 15ft. This was the biggest table we had fought on so far.

The view below is looking East from the London road. We used my custom made grass (with added snow) caulk battle mat. A sprinkling of snow covered trees graced the field.

and finally a view from the western edge...

Earlier this year one of the combatants in the game (John) visited Towton and brought back a few stones from the field. These were pressed into service as small terrain features. We can therefore state that our Towton reenactment contained real Towton terrain !

Mechanics of the Game

The following set out the mechanics of the game.

Some of examples of the cards created - please note the Special & bonus cards were included in this new deck. We agreed at the beginning the treachery card would be removed given no Lords turned in the actual battle 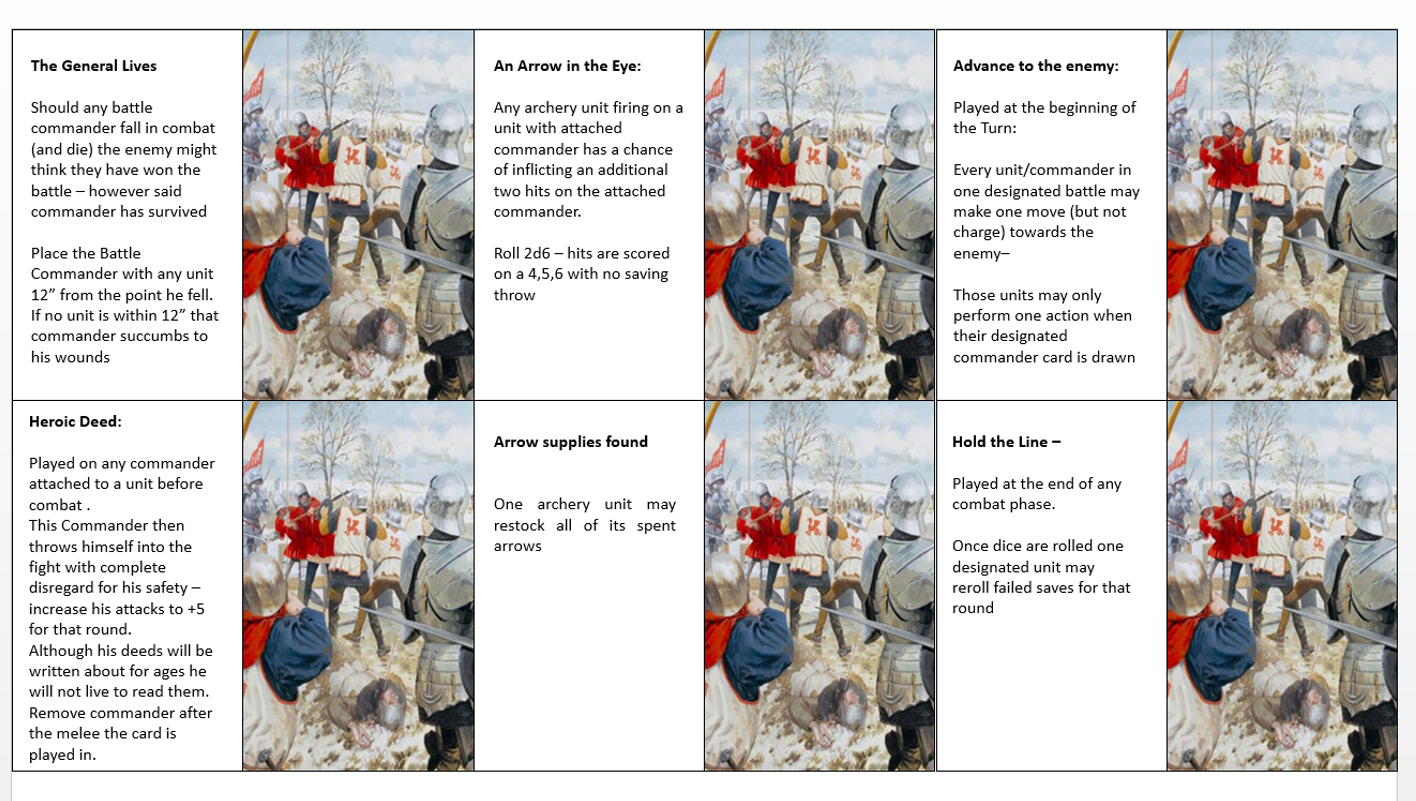 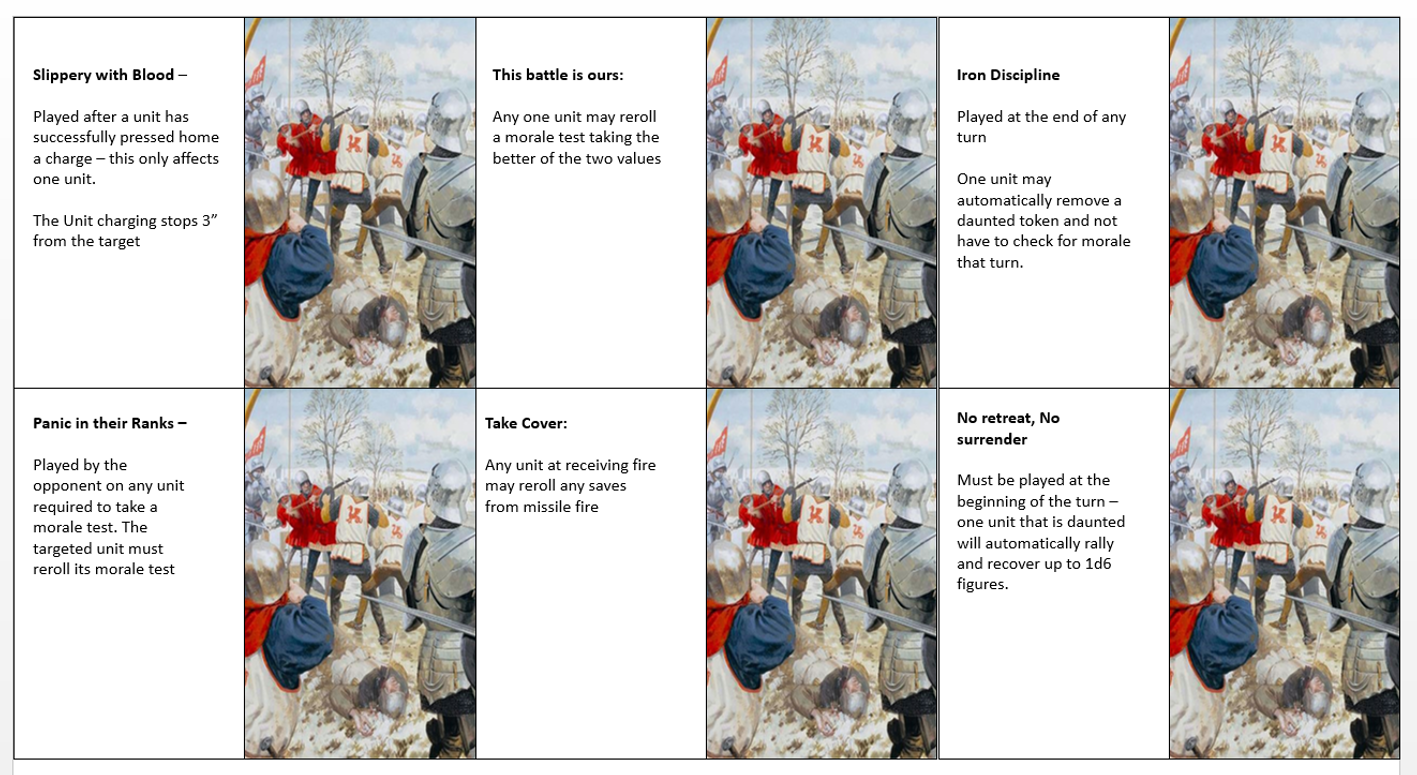 All Commanders are Level 2 with exceptions of the Battle Commanders listed below. These are all rated as Heroes (level 3) and have the standard command radius of 6”

Perhaps the biggest feature of the battle were the atrocious weather conditions on the day. It was snowing heavily and a strong southerly wind was to the Yorkist advantage.

The game will take into account both the wind strength, direction and snowfall. Both a wind card and snow card are dealt into the deck. Each time the card is drawn roll a d6 on the appropriate table.

The Game starts with a Strong Southerly wind with Light Snow

The impact on the weather can be seen in the image below. This template was printed off and stuck to an old cork tile. During the game drawing pins were used to illustrate strength direction and snowfall. 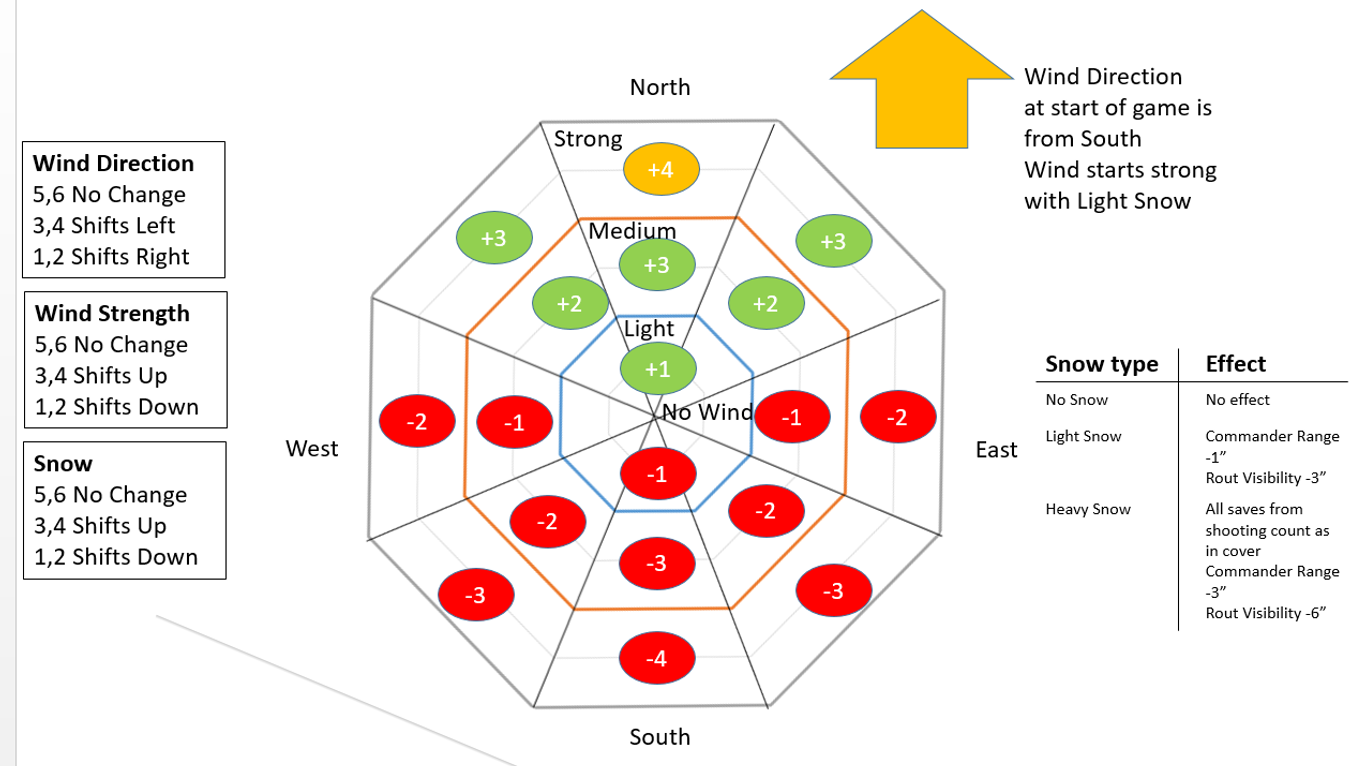 So at the beginning of the game the Yorkists will add 4” to their bow ranges (ie 13” becomes short range and 19” becomes long range, for the Lancastrians their ranges will be reduced to 5” and 11” respectively. This seems harsh on the Lancastrians but according to reports on the day the Yorkists archery barrage was extremely powerful.

The appearance of Norfolk late in the real battle was pivotal to the success of the Yorkist victory and as such we need to reflect this. Our game will start at 11.00 am and finish around 5pm – ie six hours of play.

It was agreed that Norfolk could not appear until 3 hours have elapsed (ie 2pm) .

At this point Norfolk and his associated command cards would be shuffled into the deck. As and when these are drawn out roll a d6 – on a 4,5,6 they will appear on the Northern road on the Yorkist right flank. There is no guarantee that these troops will arrive. Continue to roll a d6 each time their card is turned over. 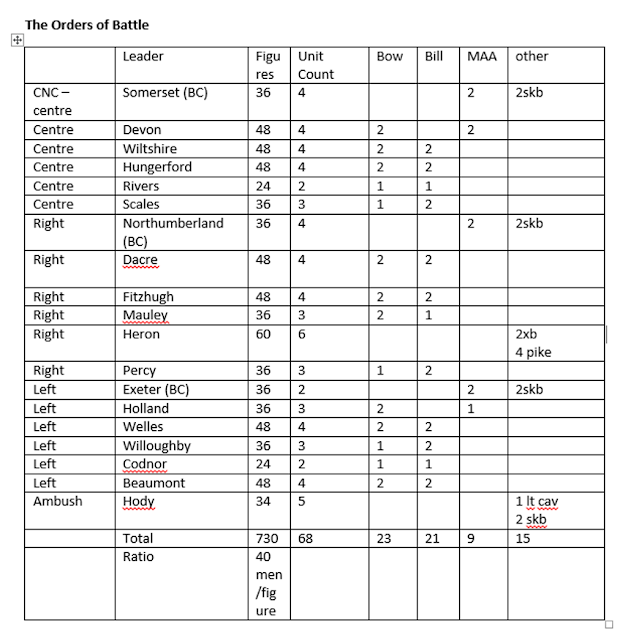 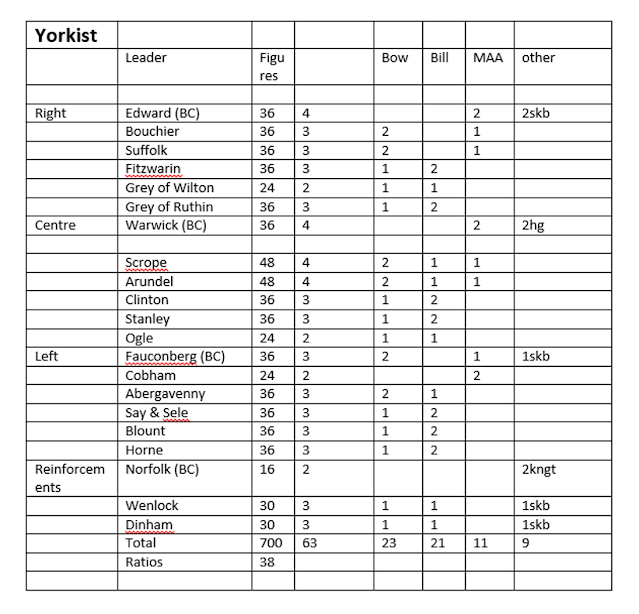 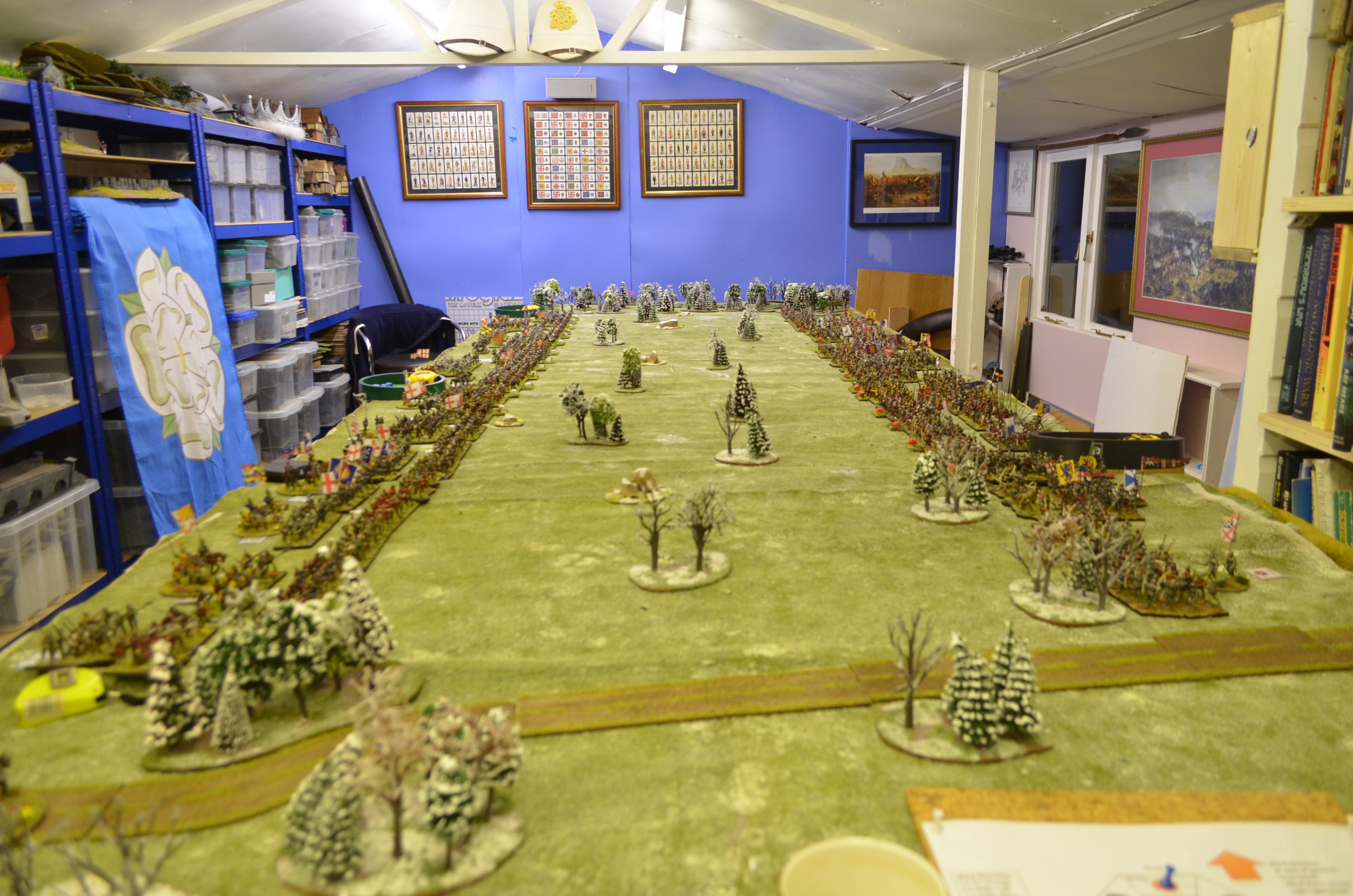 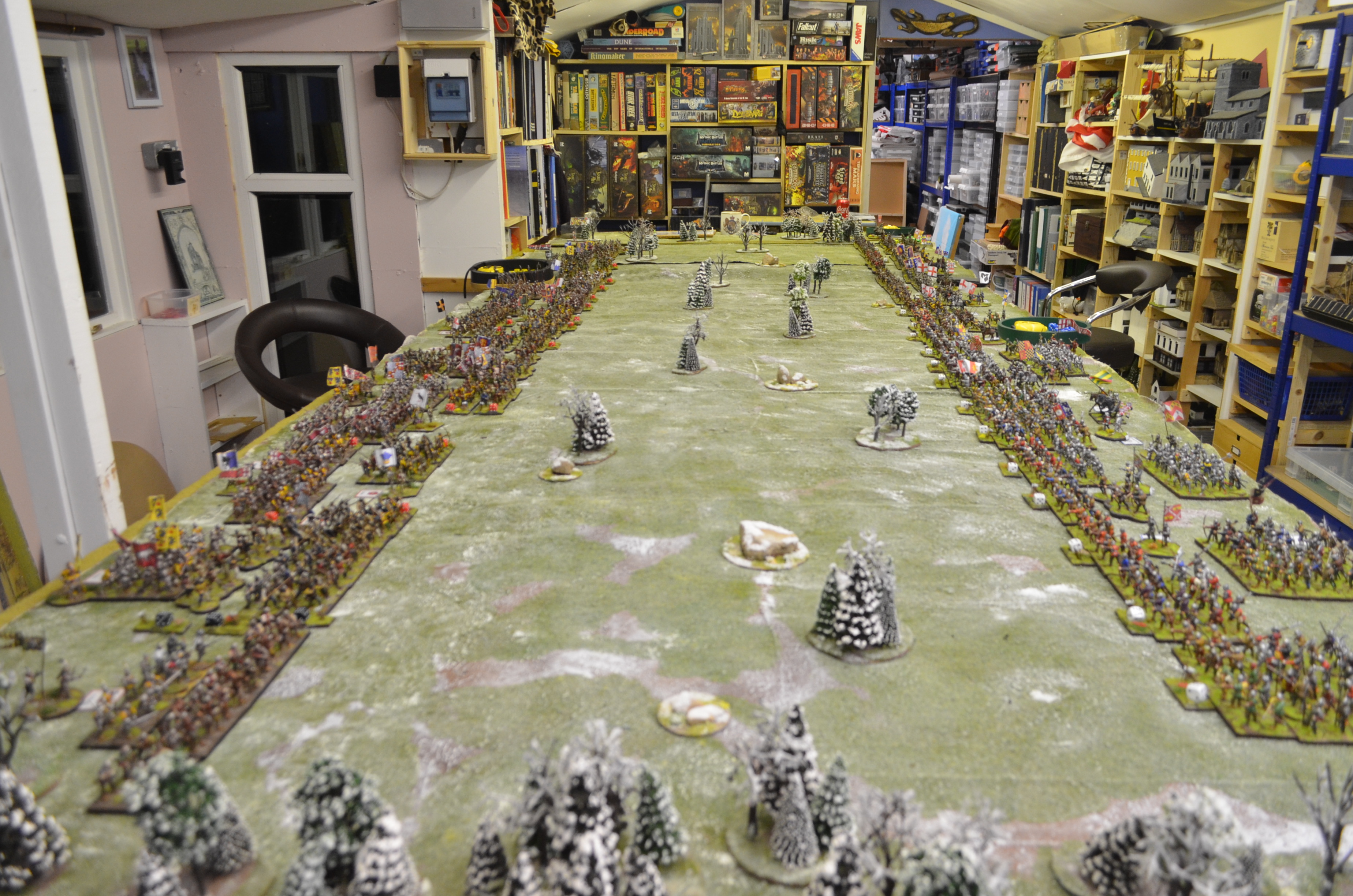 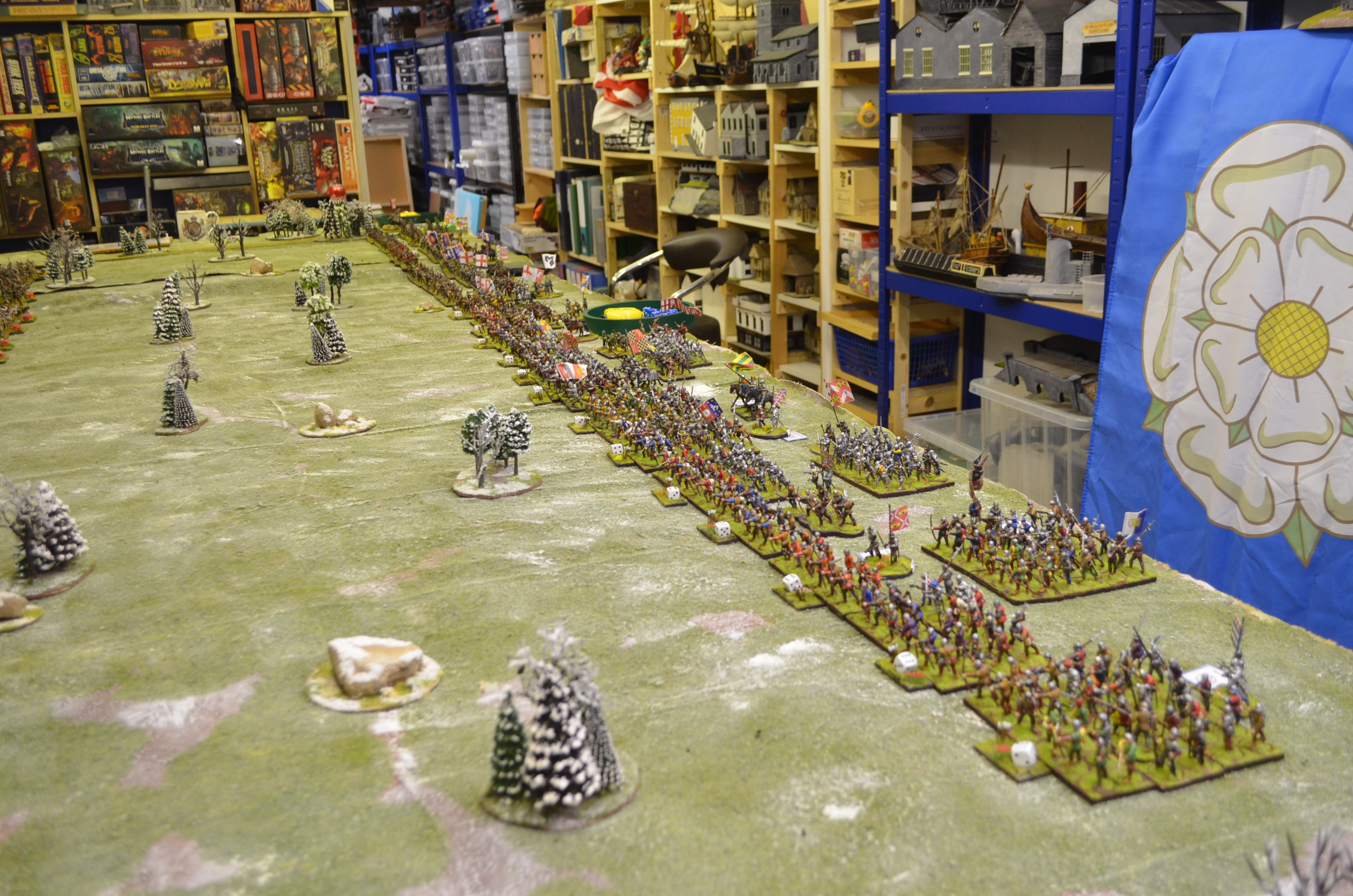 Facing off against the Lancastrians 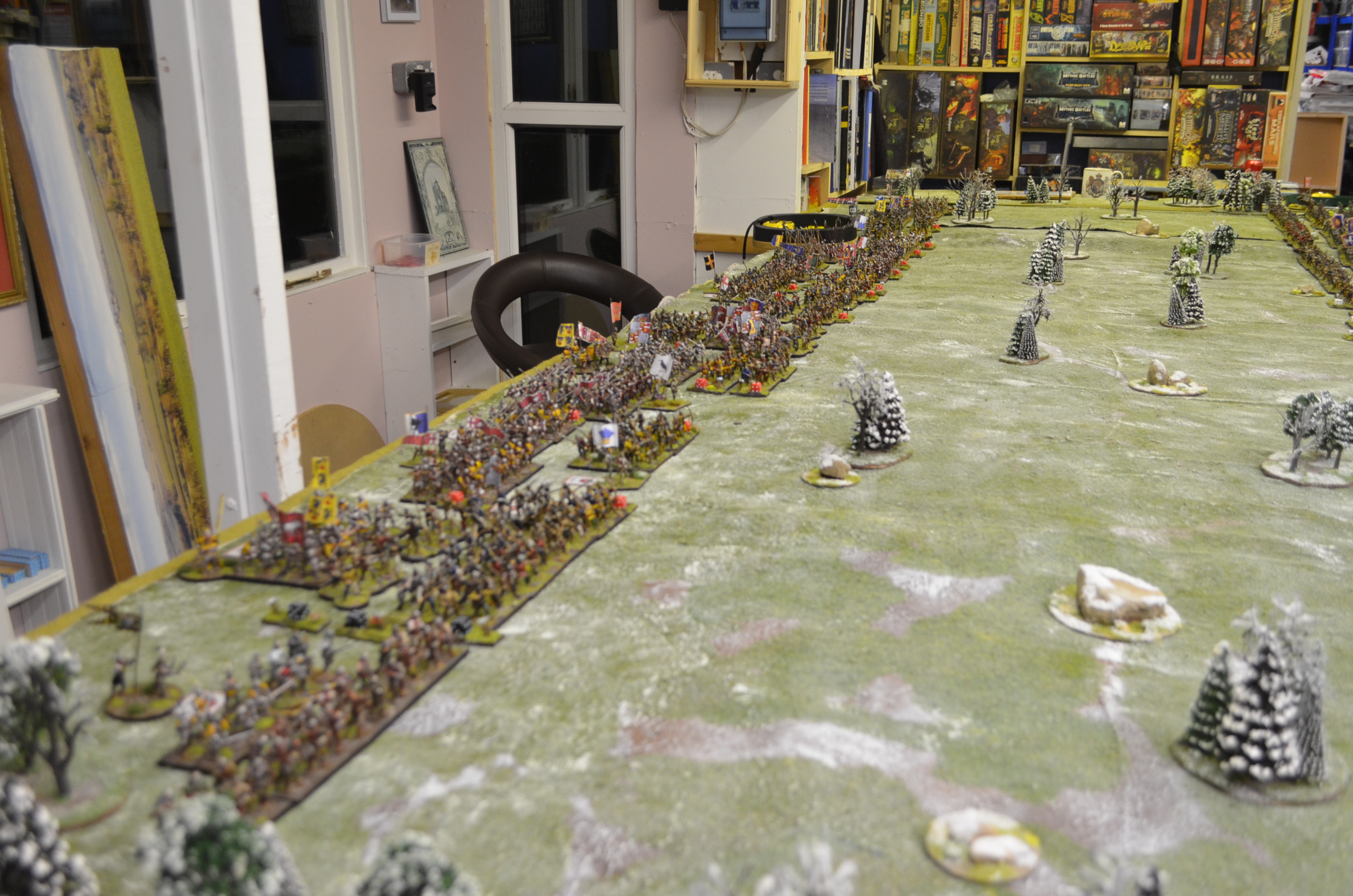 Up next the battle report which when published can be found here.