Welcome to the latest battle report from our ongoing War of the Roses historic refight series. In this report I am going to share our refight of the second game in the campaign, Blore Heath. If you missed the set up post, including the Orders of Battle, special rules and deployment please head HERE. A link at the end of that post will bring you back here.

I should point out that I have been in communication with Andy Callan for each of these games getting his support on the minor scenario specific rule changes I am imposing on these games. Andy has been most supportive. I should also add that there is a very active Never Mind the Bill Hooks face book page where general rules questions can be asked. Its worth a view if you have not been there already.

Alongside Rolf, I would be fighting on the Lancastrian side whilst Mark K and John would command the Yorkist position.

It is worth pointing out that neither side felt particularly confident which is always a good sign of a balanced game. Despite the Lancastrian’s numeric superiority the fortified Yorkist position on the other side of a deep ditch looked very daunting.

With forces set up we cracked on with the game. As history reports (we think) the Yorkist centre was set slightly back, this was a feigned retreat to draw the Red Roses forward.

We missed out the maneuver phase and went straight into the battle phase.  The opening shots of the game not surprisingly came from the light gun positioned in the Laager. This continued to fire throughout the game principally shooting at the mounted tin cans. No exploding guns in this game.

Our early cards saw the Lancastrians move up towards the ditch and drawing their first disarray tokens. As pre agreed the ditch could be traversed in two turns with each turn drawing a disarray marker. Seeing the mass of troops moving into the centre the Yorkists archers edged forward and unleashed several volleys into the Lancastrian troops. I think it is fair to say that neither side enjoyed fabulous or bad luck in the game and as such casualties were more often than not falling as averages for the various dice rolls.

Over on the Lancastrian left wing the six units of Lancastrian Cavalry trotted forward into the ditch. With no enemy directly in front they were going to need to cross the brook, and advance past the Laager before getting into action. This was going to take some time and don’t forget wheeling troops takes time as well. 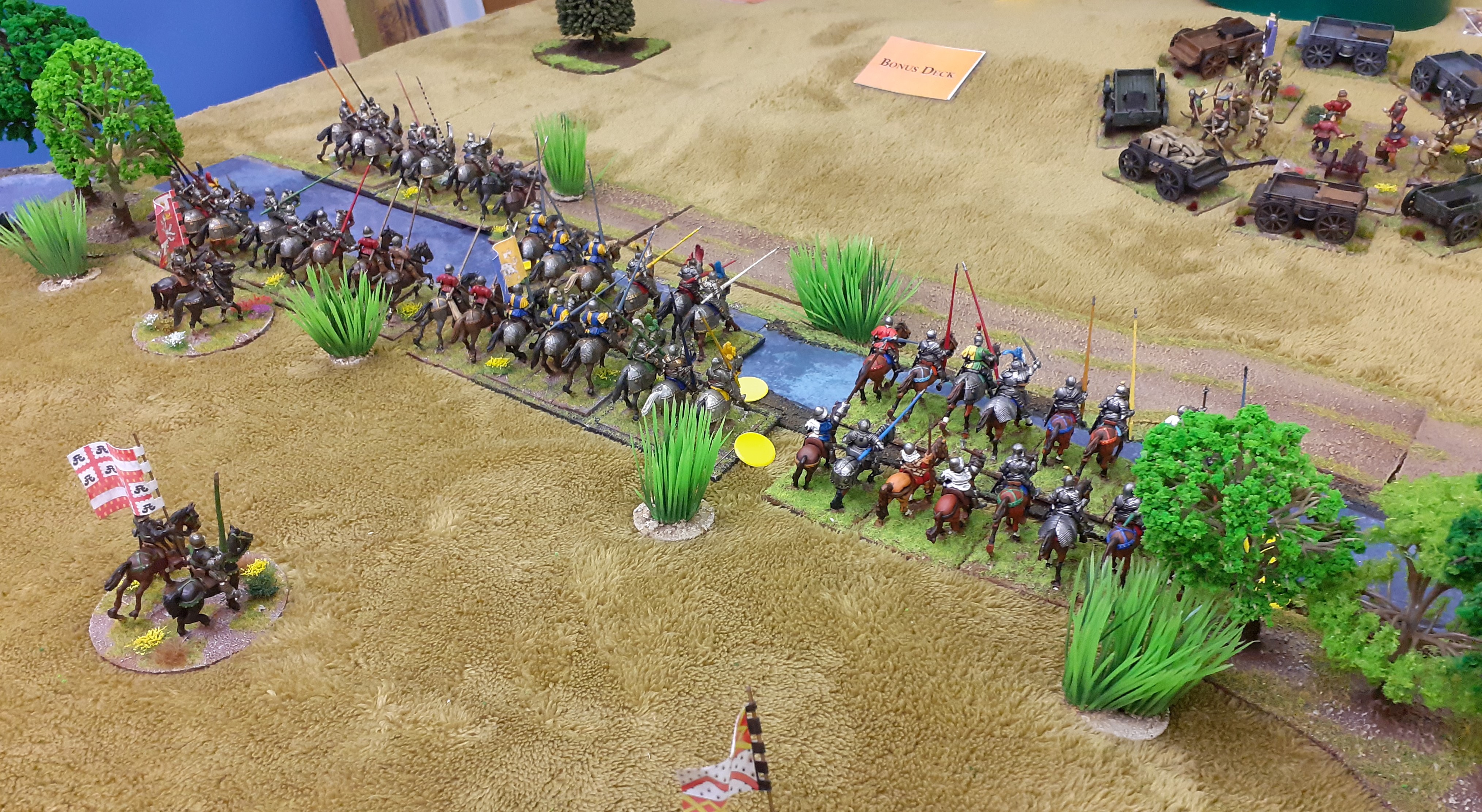 With the bulk of the Lancastrians now in the ditch a firefight between the opposing forces archers took place at long range. Those stuck in the ditch could only fire their front ranks (disarrayed), a few skirmish units made a nuisance of themselves. 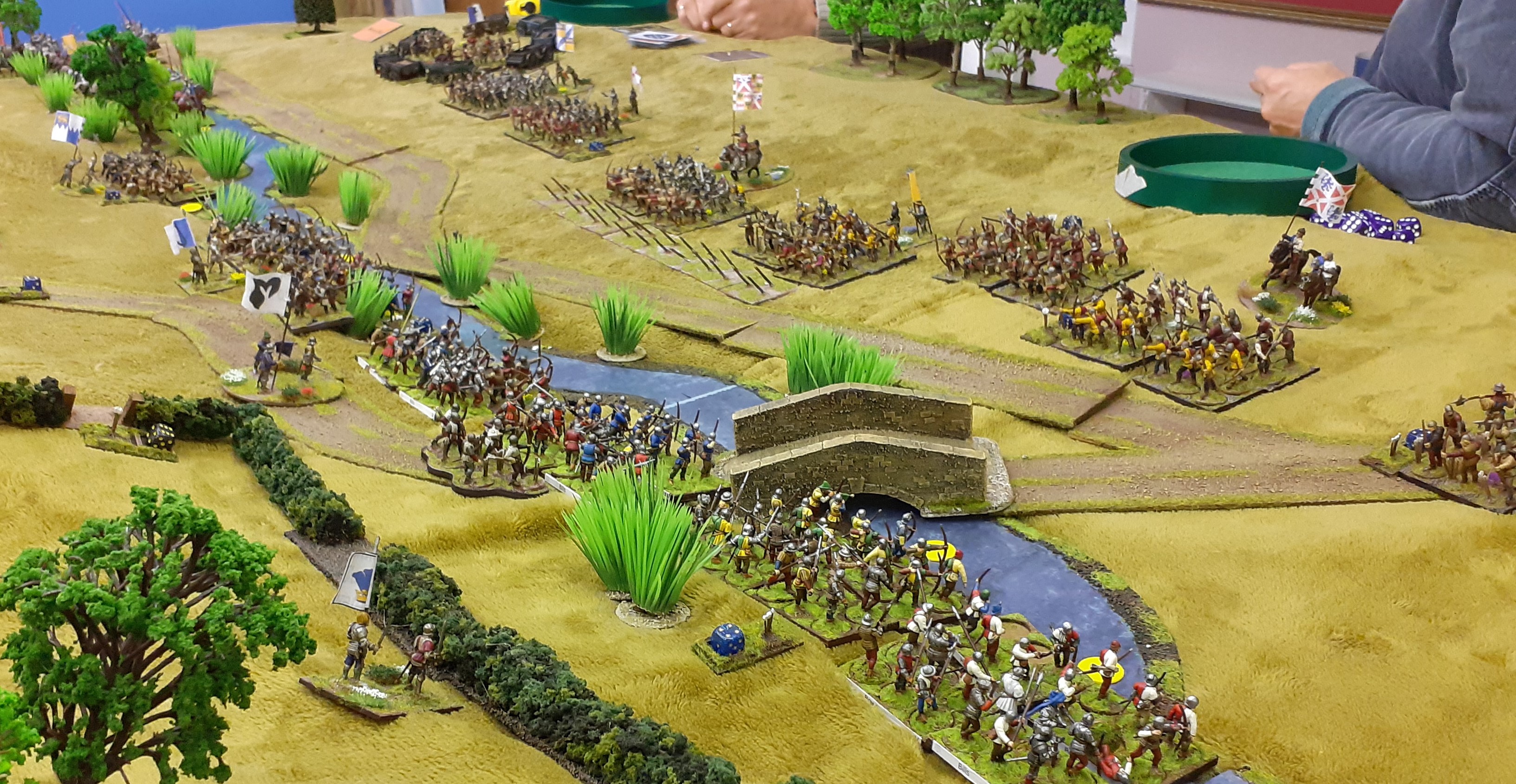 As the cars turned over the Yorkists won the first special event card and played this quite quickly. The treachery card !! They decided that one of the rear units of Audley’s Knights would turn coat. History was repeating itself.

The unit crashed into the unit directly in front of them and scored …..1 hit. This was promptly saved by Rolf. The defenders returned blows, striking a number of the traitorous knights from their horses and a few seconds later they failed their morale savbe and fled from the field. I think the Lancastrians were incredibly fortunate to only lose one unit and not have this unit rampaging behind their lines. Quite possibly had things been different the battle would have played very differently.

As the archery duel continued more men fell and some units were starting to hit the 50% casualty threshold for morale checks. Things were looking grim for the Lancastrians they just couldn’t get out of the ditch (their choice was simple move or fire but not both on account that moving in the brook added a disarray). In the end they held ground and continued to fire into the Yorkists uphill. By now arrows were starting to run into short supply for the Yorkists and not enough casualties were piling up in the brook.

A fanfare of trumpets !! A Lancastrian cavalry unit had finally cleared the ditch and positioned itself to charge a unit of men at arms and archers directly in front. Spurring on their mounts Rolf crashed into Johns Men at Arms. Dice were rolled and a few casualties inflicted on both sides but crucially the knights won. The resulting morale check saw the Yorkists (both units fleeing the field). This I believe was the turning point of the game, the Yorkist left flank was open  and a large amount of cavalry were moving forward.

The subsequent round saw a charge from the remaining Yorkist Men at Arms into the ditch, this bloody assault wiped out two Lancastrian units in quick succession. As the turn moved to a close a quick check on the morale tokens showed that the Yorkists only had to win four more red Lancastrian tokens to force the potential devastating scenario specific turn coat rules. This was going to be close. 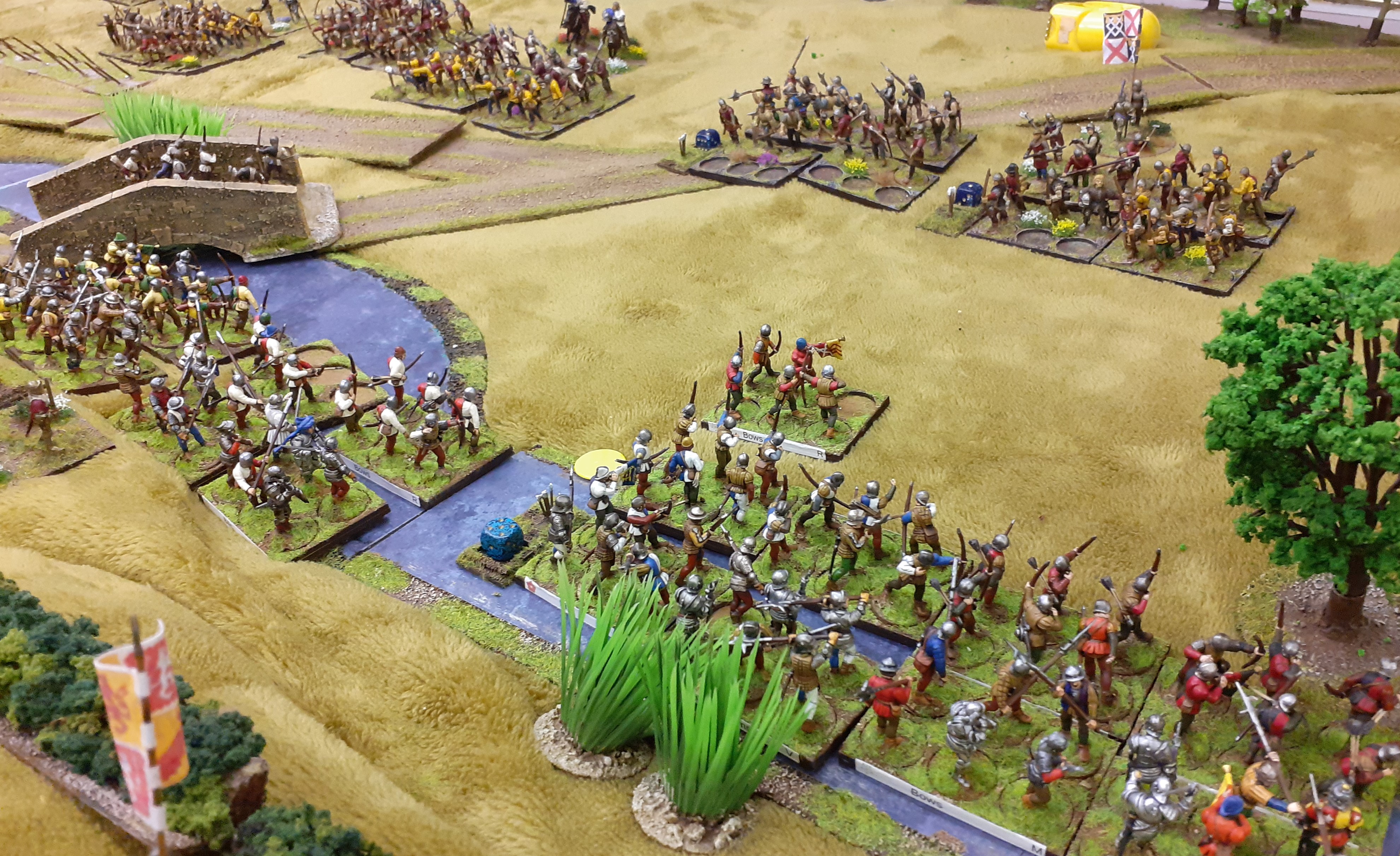 However a succession of failed Yorkist morale checks and a bitter fight across the ditch on the Lancastrian right wing saw a Red rose victory becoming closer. As the evening drew to a close, the Lancastrians on the far right wing finally entered the fray and unleashed a hail of arrows. The Yorkist defence collapsed and the Kings forces could claim the day.

This was one very bloody battle, the casualties were horrendous. Virtually every unit (bar the Knights) had suffered in some form. I would estimate close to 35%-40% were removed from the table during the fighting and the rest in routs. The battle really could have gone either way, the failed treachery charge of the Lancastrian knights could have swung the result in favour of the Yorkists. Had the Yorkist archers closed to a shorter range their arrows into the ditch would have been devastating.


So that was our sixth game of Billhooks and without trying to sound like I am gloating it was my sixth victory in a row.

The Battle of Northampton can be found HERE