Welcome back to the ongoing series of War of the Roses refights using the Never Mind the Billhooks rules recently released.

Following the engagements at St Albans & Blore Heath we now turn our attention to the third battle at Northampton. For the observant amongst you I have chosen not to refight the non-event at Ludford Bridge but you never know maybe we will return to this in the future.

As per the last two reports this post is in two parts, the first deals with the background, orders of battle and specific scenario rules. The second will focus on the refight of the battle.

In addition I had to custom build the defences for this game and how they were constructed is at the end of this post.

The Battle of Northampton was fought on 10 July 1460 just outside the walled city of Northampton alongside the river Nene. An army of nobles lead by the Duke of Buckingham fought for King Henry VI (Lancastrian) versus the armies of the Earl of March, Edward Plantagenet and the Earl of Warwick.

It is believed that this was the first battle in England to feature artillery.

Earlier in June Warwick, his father Salisbury and March returned from their short exile in Burgundy and landed in Kent. From here they marched to London gathering loyal troops on their way. Entering London Salisbury laid siege to the Tower of London whilst Warwick and March headed North to confront the Kings forces.

The Kings forces took up a defensive position near Delapre Abbey. There are two schools of fought as to where these fortifications were built. The first suggest that they covered a bend in the river, the second suggests that they alongside the river. Sensible battle strategy would suggest the latter as fighting with your backs to river was not particularly sensible.

The defending Lancastrian army dug in behind a stake covered rampart and prepared artillery positions. Their forces were estimated at around 6000 men.

The Yorkist army was somewhat stronger (around 9-10,000 men) and formed into three battles under the command of March, Warwick and Lord Fauconberg (Warwick’s uncle).

As per previous battles the leaders went to parley, the Yorkists demanding that the King be handed. The Lancastrian commander, the Duke of Buckingham, replied "The Earl of Warwick shall not come to the King's presence and if he comes he shall die.

This was the last time in the war of the Roses that the forces parleyed before battle.

With no sign of a truce the Papal Legate attached to the Yorkist cause excommunicated the entire Lancastrian army (the reasons why are outlined below) and whilst this momentous event sunk in to the defenders minds the Yorkists attacked.

Heavy rain made the Lancastrian guns ineffective and although the going was heavy the Yorkists finally reached the barricades. Struggling to surmount these a break finally came when the forces of Lord Grey defected and helped the Earl March’s forces into the encampment. With Yorkists now running amok inside the defences the Lancastrians routed.

Henry VI was captured once again and his Lancastrian leaders were all killed in the brutal melee.

It would appear that the weather had a significant affect on the battle. Firstly based on the report I read the ground was particularly heavy going and the river Nene was swollen.

Secondly it apparently rained on the day of the battle and as such both the archers and artillery found the conditions extremely tough.

With regards to the heavy ground all troops will move no faster than 4” in a command order and any troop moving twice will find itself in disarray. Moving once does not give a disarray token.

Add to the card deck a weather card.

The day will start off raining (persistent).  Each time the weather card is drawn and roll a d6 and consult the Weather Track.

For example the first turn the card is drawn a 1 is rolled. The weather now reverts to a light drizzle. Immediately after card is drawn effects come into play.

The second time the card is drawn a 3 is rolled – the weather stays the same. Etc.

Warwick had brought with him from London a papal legate. The Papacy was quite keen to see Henry VI removed from power so England could resume its war with France. Whilst France was tied up fighting the English it prevented them from conquest further south in Italy.

Somehow Warwick contrived to have the entire Lancastrian Army excommunicated at Northampton. This would have been a significant factor when it came to the morale of the Kings forces. As a result of this excommunication the Lancastrian army will lose 1d6 morale tokens at the start of the game. These are NOT given to the Yorkists but just removed from play. The excommunication ceremony was performed at St Eleanor's Cross overlooking the battlefield.

The turning point of the real battle was the treachery of Grey. He stood his forces down when approached by the Earl of March’s forces. Indeed reports suggest that his men aided the Yorkists to cross the barricades and then flood into the camp.

Grey (and under his command Catsby) are positioned on the right flank of the camp. It would appear from a write up of the battle on the British Battles website that Warwick had been is secret negotiations with Grey and as such expected him to defect. However he probably could not be certain.

To reflect this in the game I propose that Grey & Catsby’s command cards are excluded from the playing deck until the Yorkist forces actually reach the barricades. At which point in time they are then shuffled in for the following turn.

When either of these cards is drawn a dice is rolled on a 4,5,6 the forces of Grey (and Catsby) declare for the Yorkists.

On a 1-3 they have decided that their loyalties now lie with the King.

Both sides can influence this die roll by…

+1 if either March/Warwick within 12” of Grey

-1 for each two white tokens held by Lancastrians (round up)

+1 for each two red tokens held by Yorkists (round up)

The Earl of March reaches the barricades and is within 12” of Grey, unfortunately Buckingham is 16” away. At this point in the battle the Yorkists have lost 5 white tokens and the Lancastrians two red tokens.

A four is rolled once modified it becomes a three and Grey decides that as the battle appears to be going the Kings way he will fight for the crown.

The impact of treachery

Should Grey remain allied to the King all of his troops take one disarray token (afterall they were expecting to turn coat) but forward going they fight on the Kings side.

However should Grey switch allegiance to the Yorkists each unit must make a morale test at -1 immediately. Those deciding to depart leave the field.

The Battle ground itself was relatively flat and in areas particularly boggy thanks to the heavy rain and proximity to the river. The key feature of the battle are the defensive fortifications of the Lancastrians. To support this game I have built 12ft of ramparts and have incorporated these into the defensive gun positions built for my ECW games 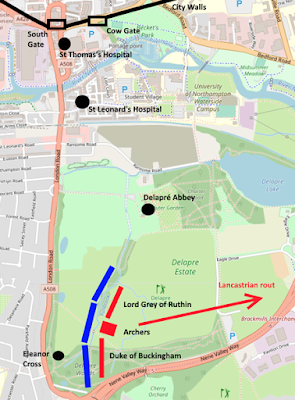 The second map shows the encampment with its back to the river. We will however use this deployment. 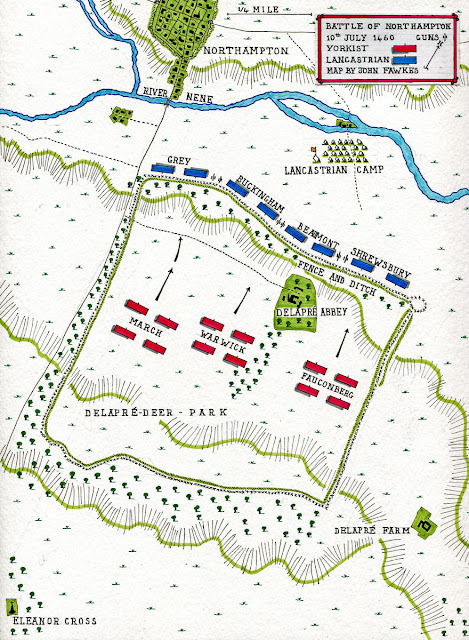 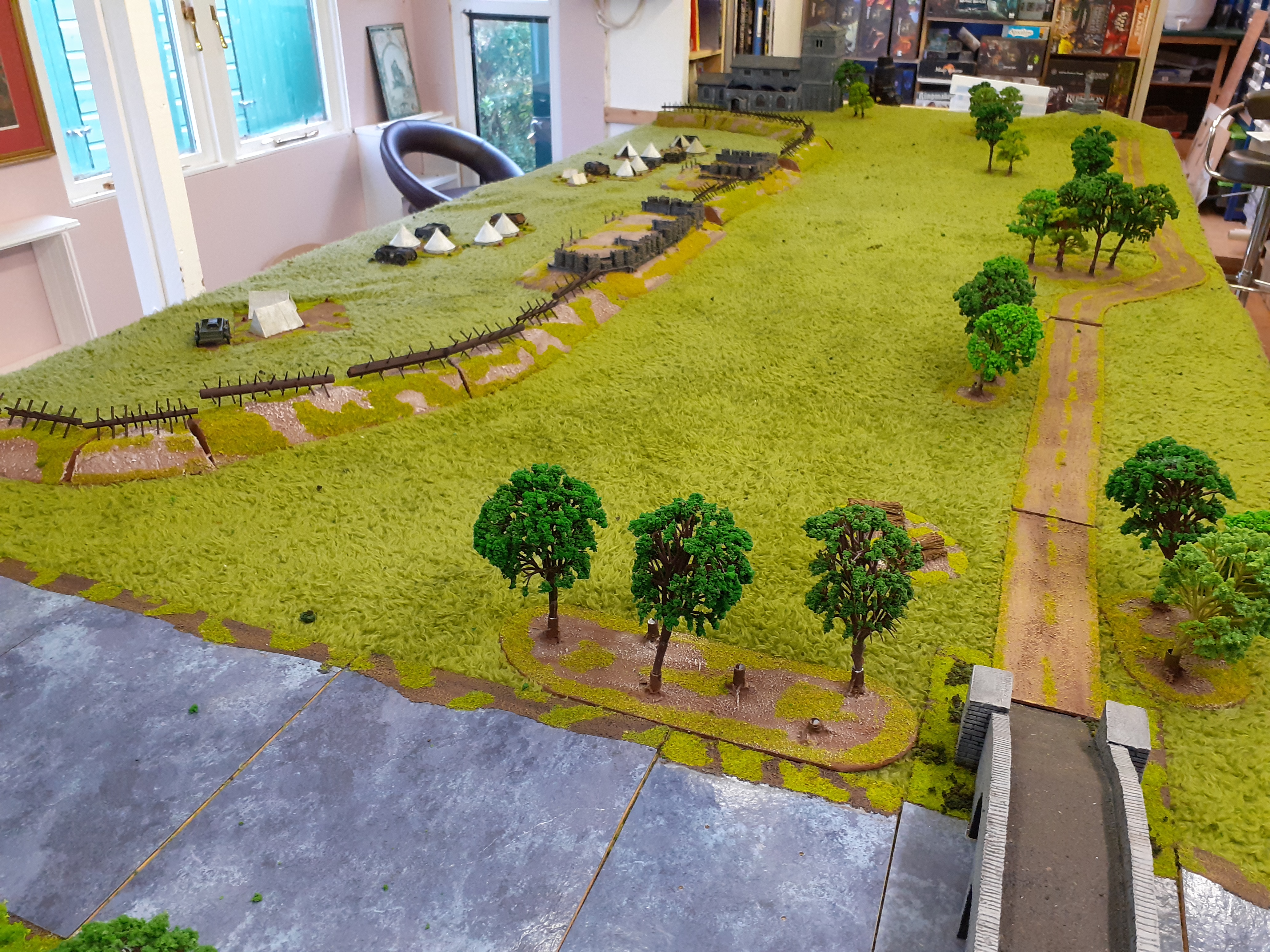 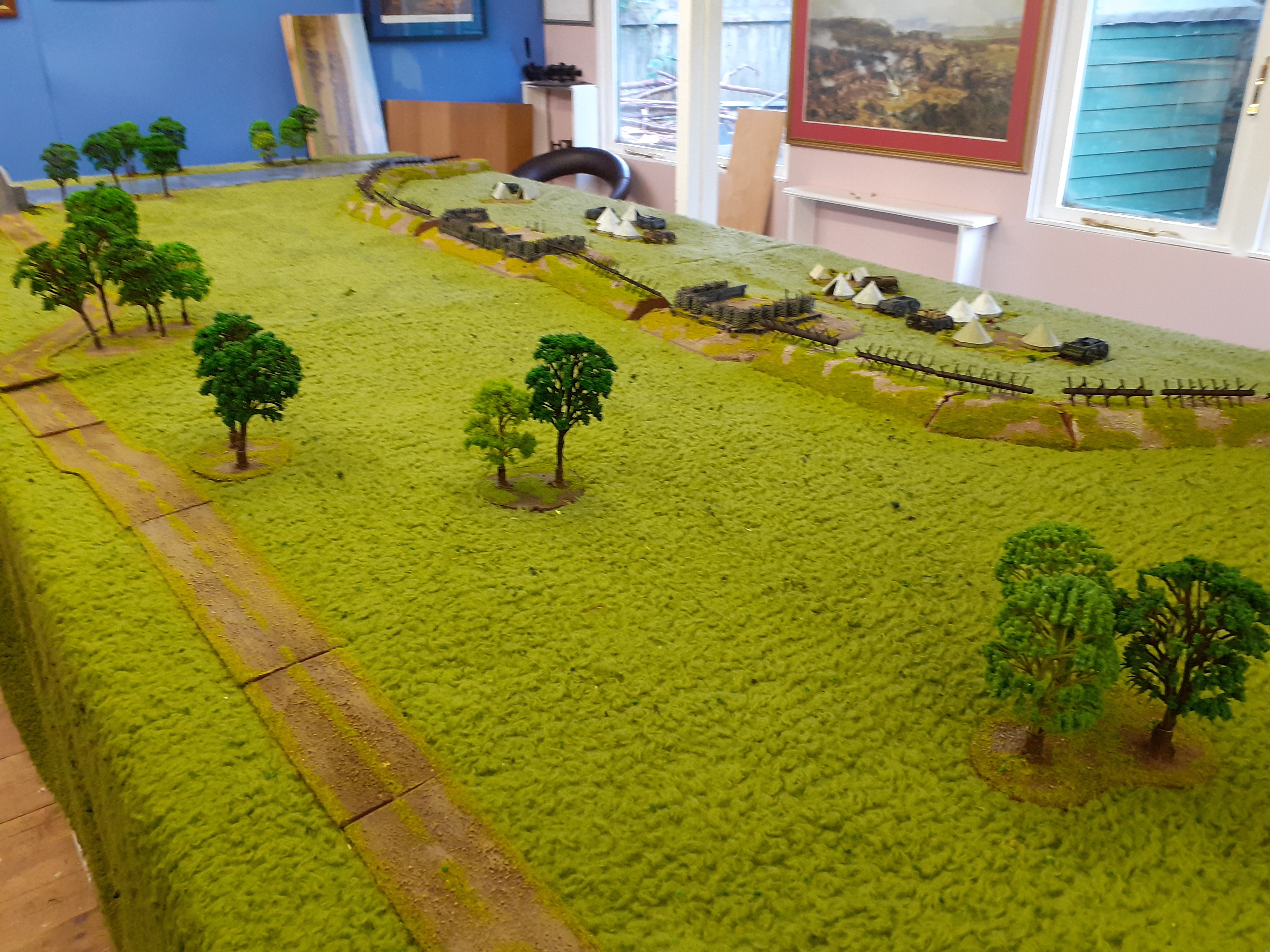 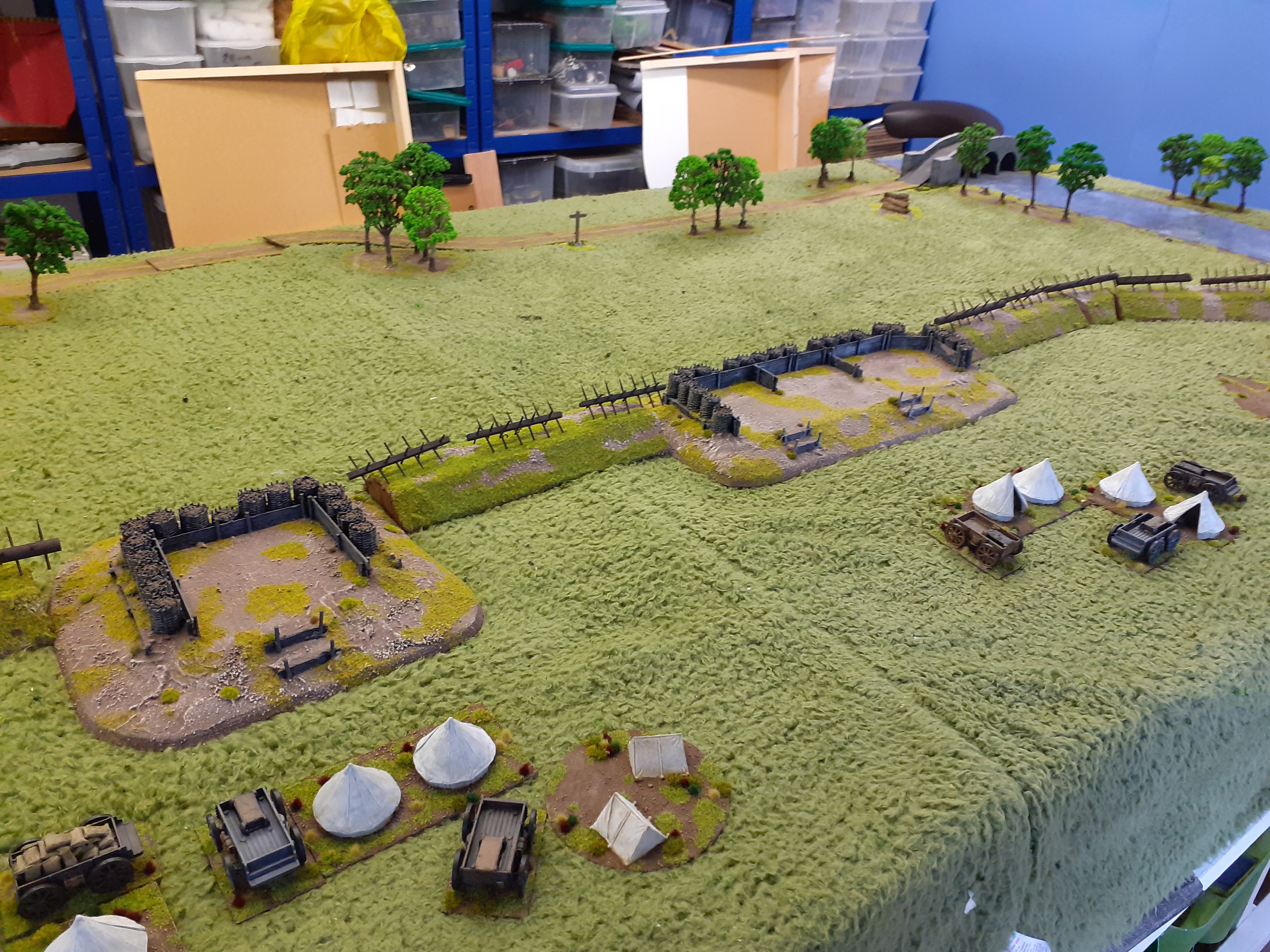 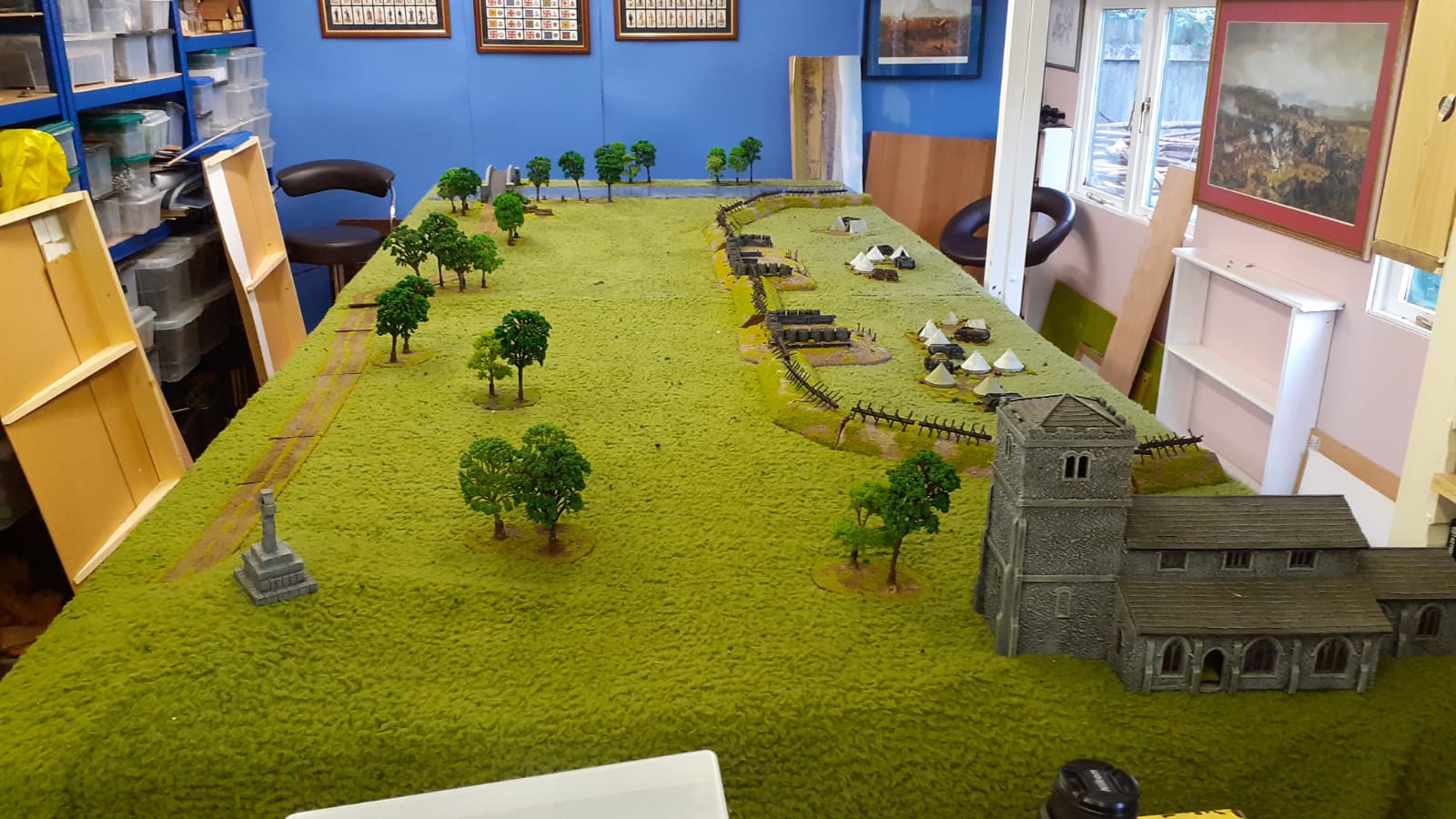 Estimates for Lancastrian forces vary from 6000 to 10000 men whereas Yorkists are believed to have had between 10000 to 15000 men. To keep things simple I have elected that both sides will start with the lower of these two numbers.

Both sides enjoy a figure ratio of around 1/30 and the points are almost exactly 50% bigger for the Yorkists.

To bring this game to life I had to spend the weekend building the Lancastrian defences. I rushed these so they are not as perfect as I would have liked.

Starting off with hardboard I cut out a rough lay out 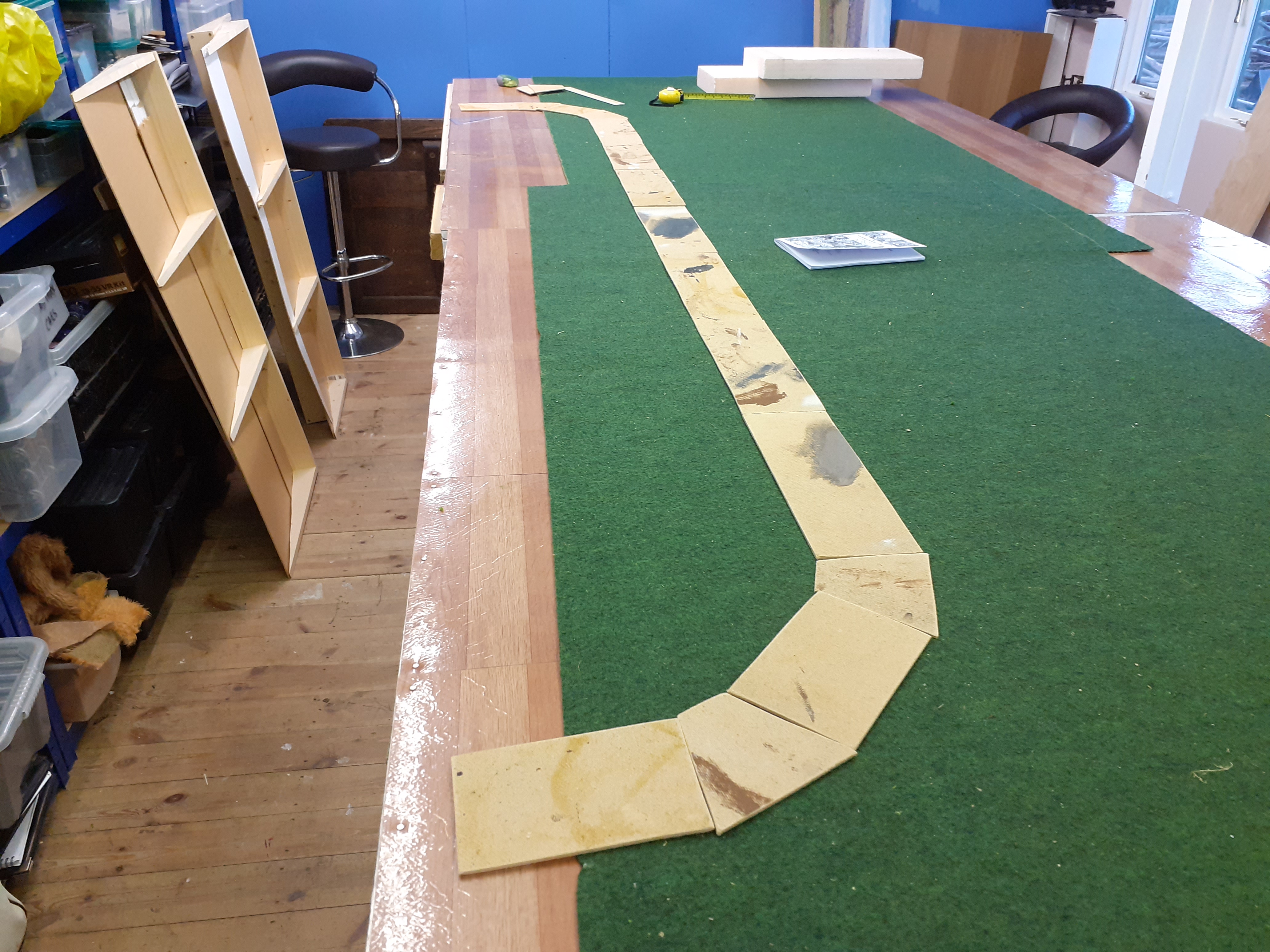 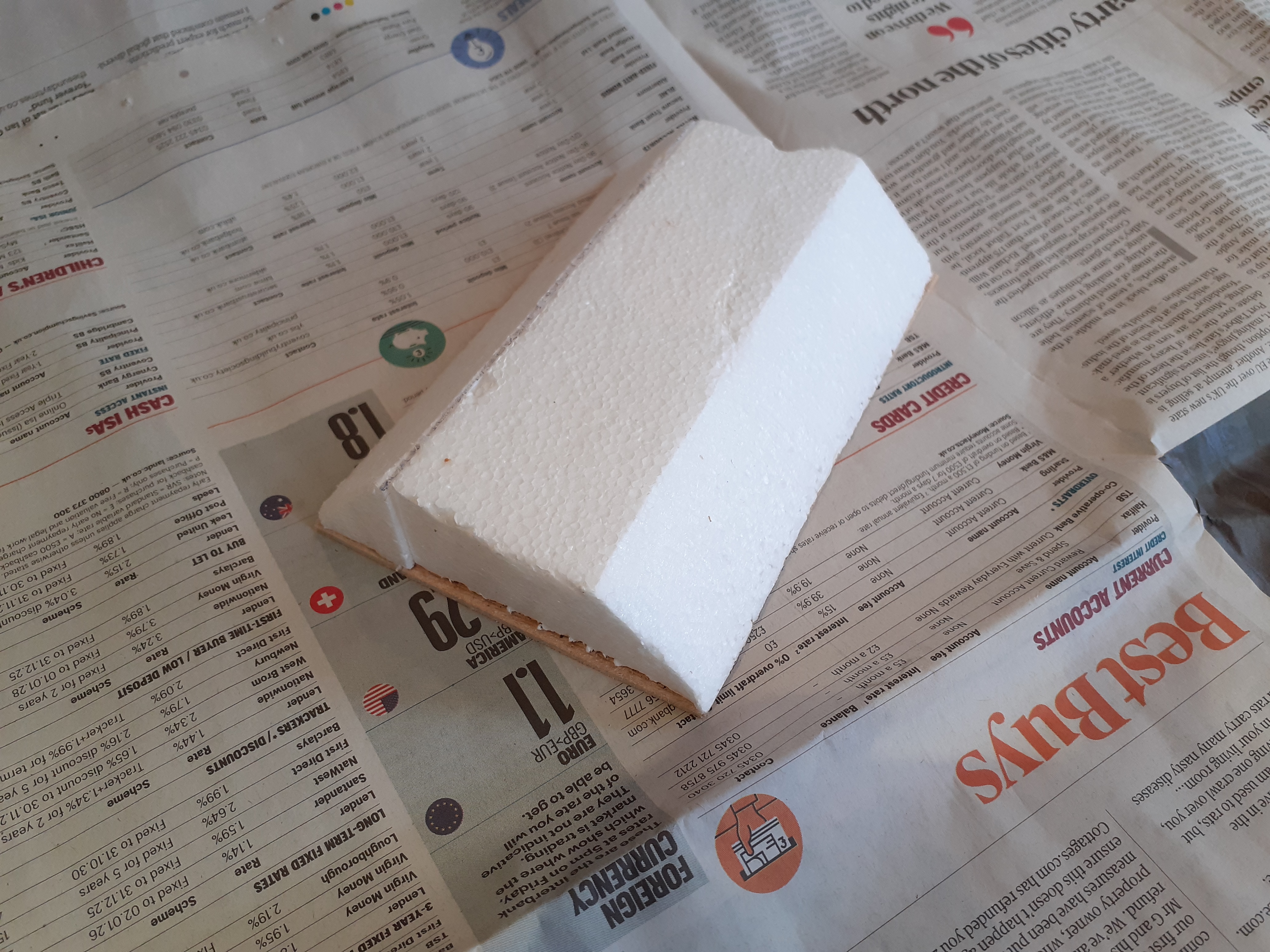 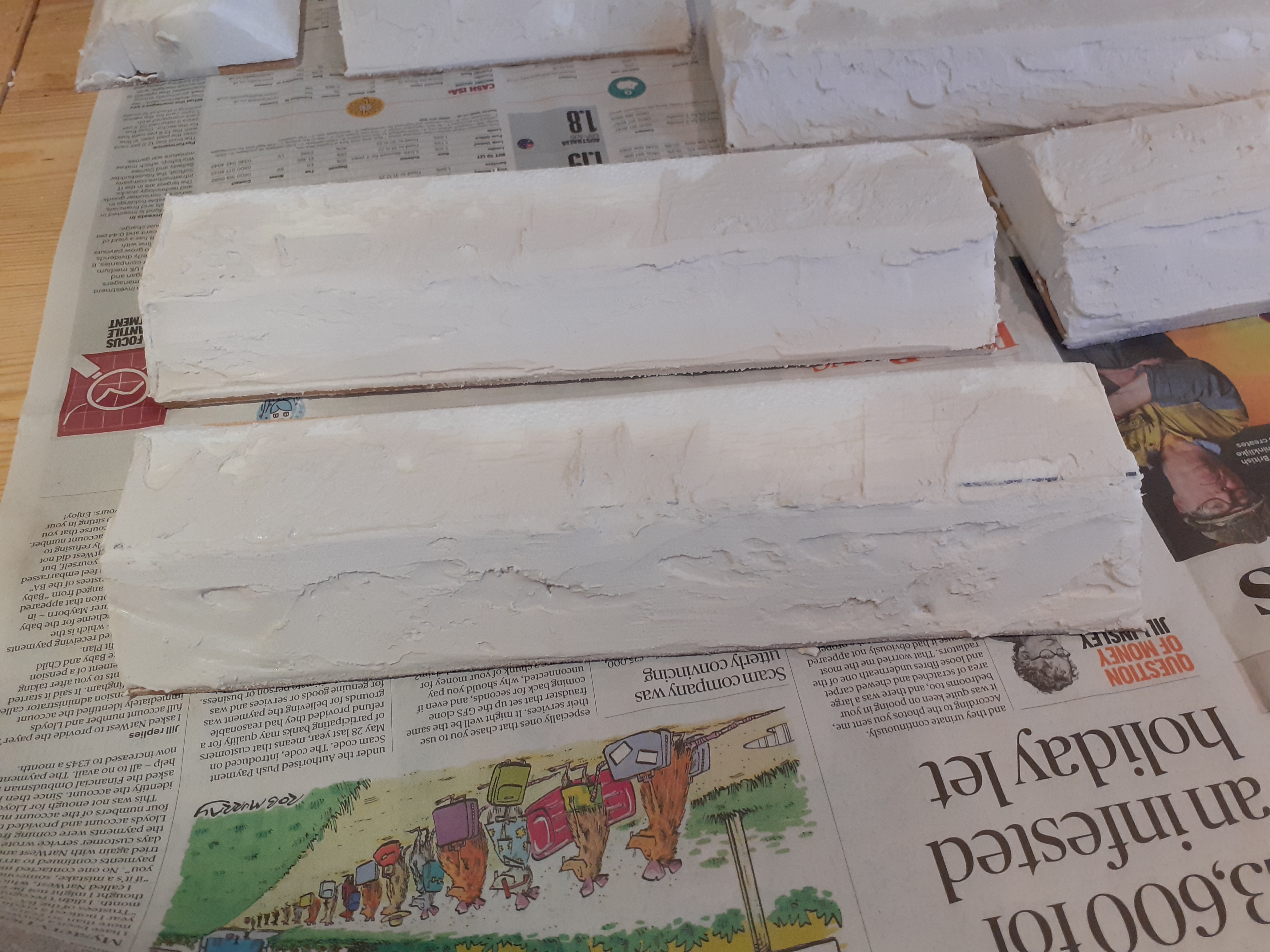 Once dry they were coated in pva and sand. Once again I waited for them to dry and then painted brown 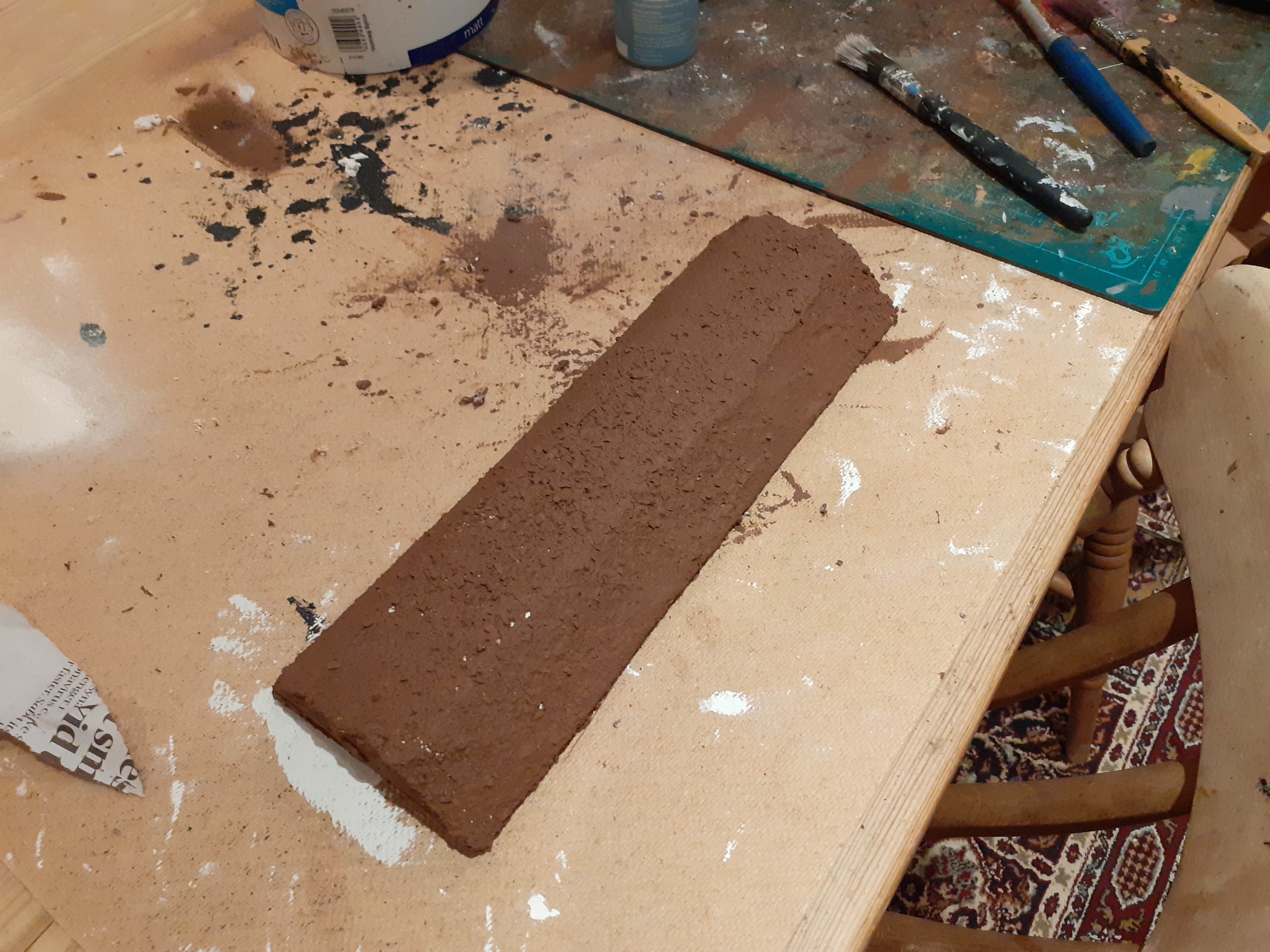 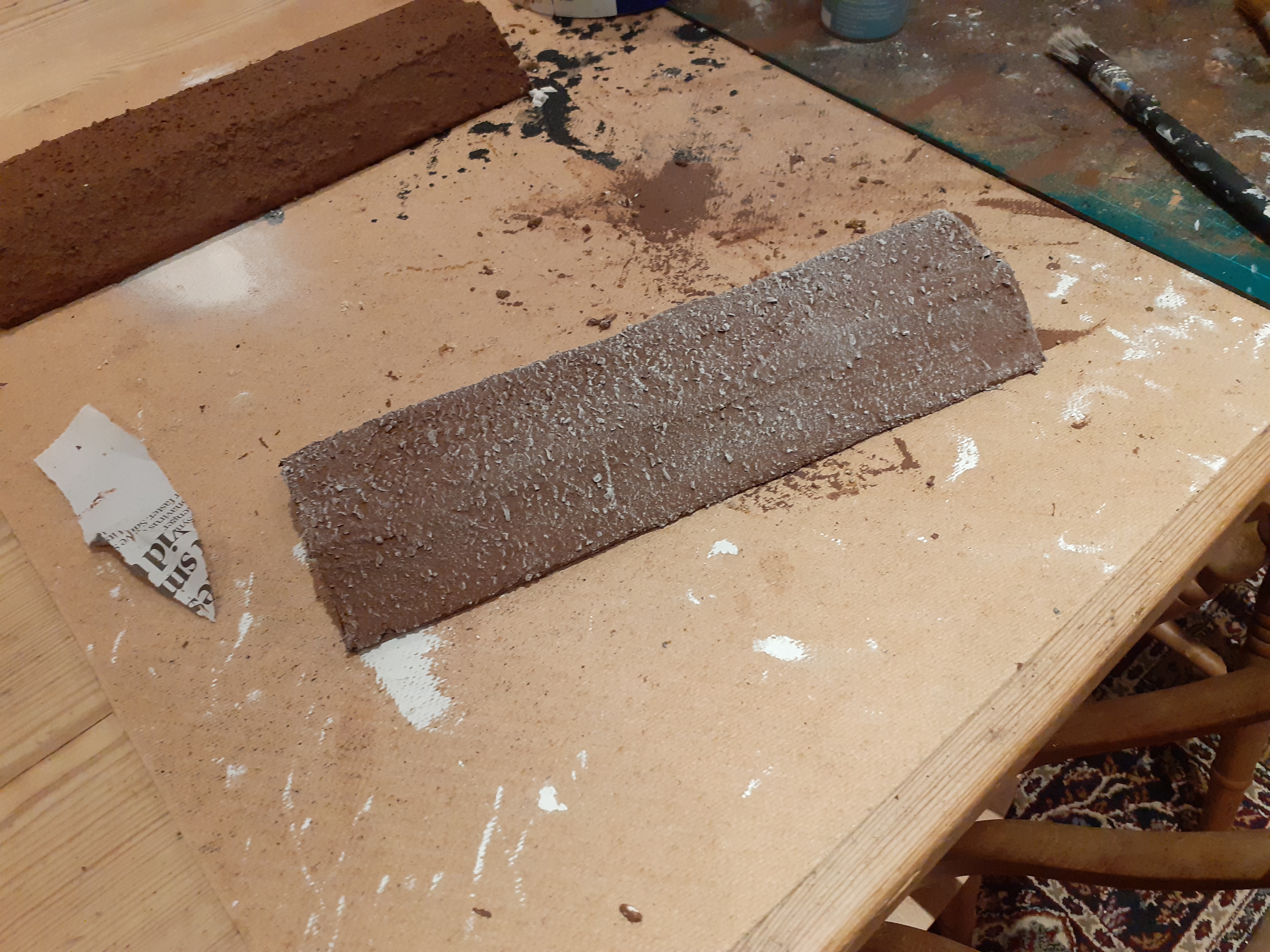 Finally I could then add static grass. 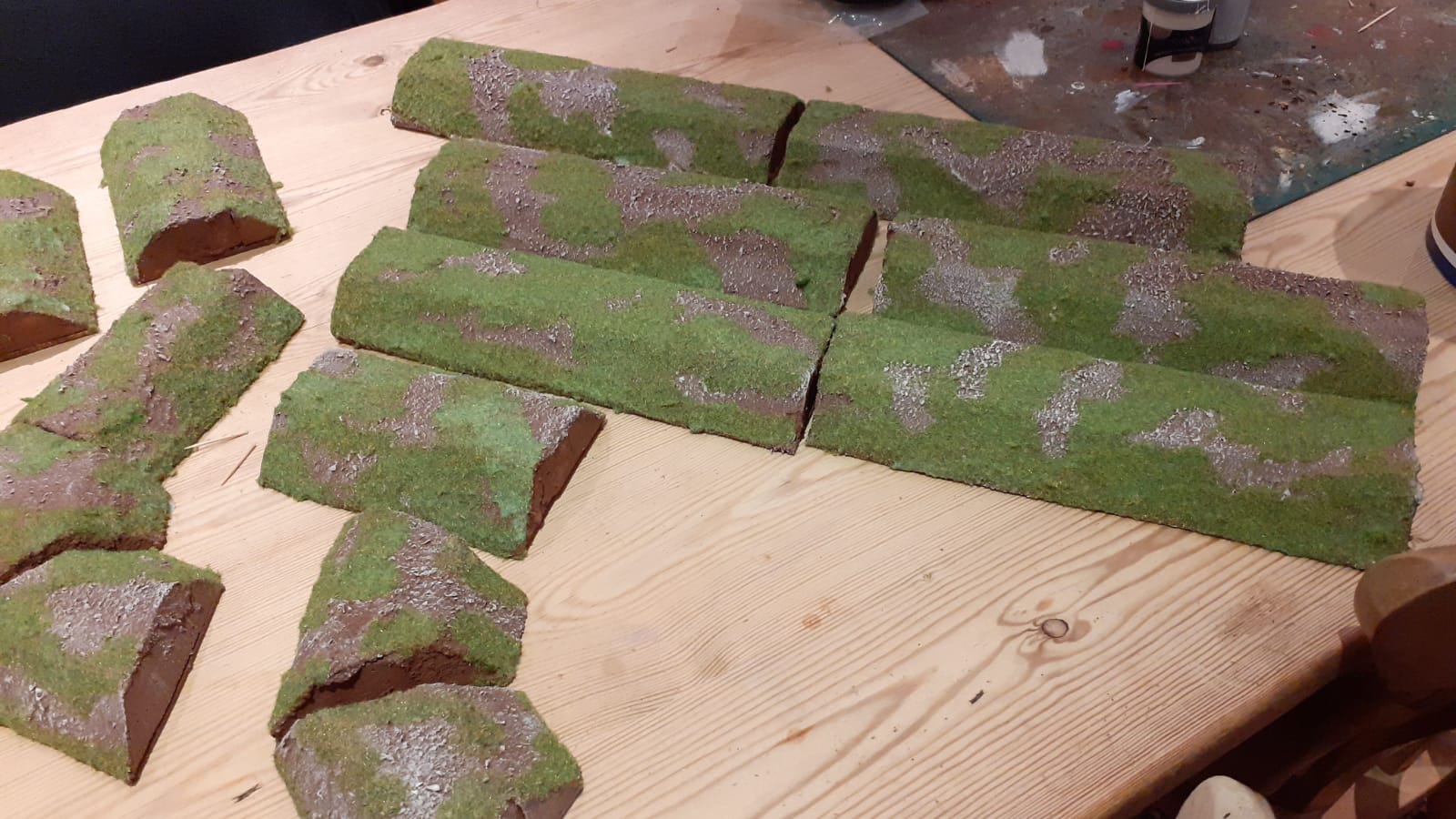 Sitting atop the ramparts are some home made Cheval de Frises (medieval barb wire). These were made from a variety of long sticks (namely chop sticks) drilled through and skewers glued through. 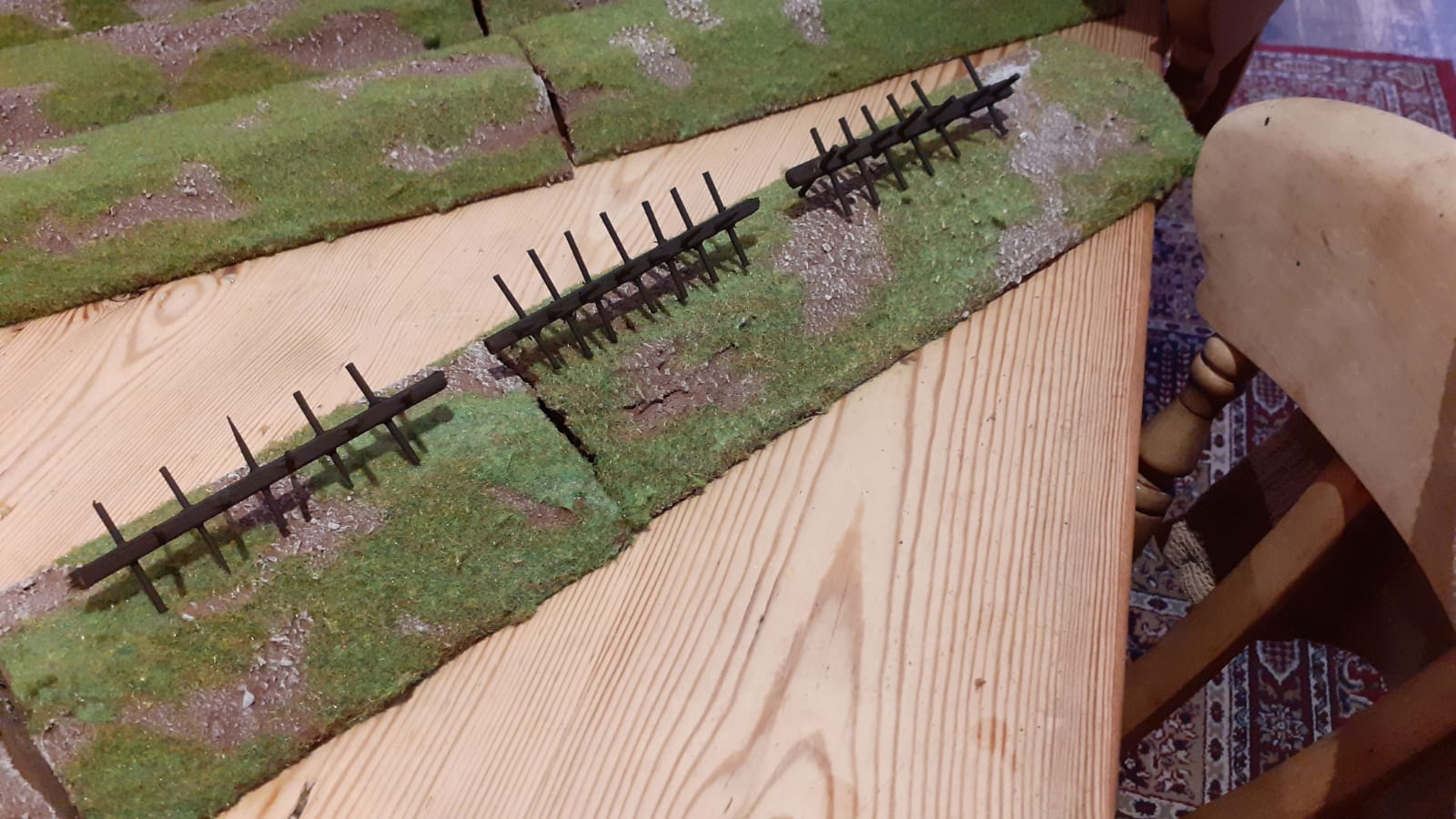 the battle report can be found HERE .