Apologies folks this is going to be a rather long post.. This is part 1 of our refight of the First Battle of St Albans - a link at the end will take you to part 2 (when the battle has been fought and it is written up)

With several Shed players putting together War of the Roses armies in the last few months we were delighted to initiate the battles using the New Never Mind the Bill Hooks rules. Having now played these a few times as documented earlier in this blog we thought it might be quite fun to try and 'play' all the key battles of the War of the Roses in Chronological order.

This will almost certainly be a labour of love and assuming copyright issues don't get in the way who knows maybe I'll put together a download on all of them?

In this particular post I am going to set out my thoughts on how we will recreate the very first battle of the War of the Roses - The First Battle of St Albans.

To support this game I have drawn my information from

No doubt there are plenty of other sources oy there and as time moves on I am sure my library will be extended.

Our game has to satisfy the following criteria:

Lets start with the table layout. In the two pictures below (sourced from the internet) we can see that the Lancastrians hold the town and the Yorkists are ranked up outside to the east. History tells us that the Yorkists had made camp in Key fields that lie outside the ditch (Called the Tonman or Monks ditch ) circling the town. 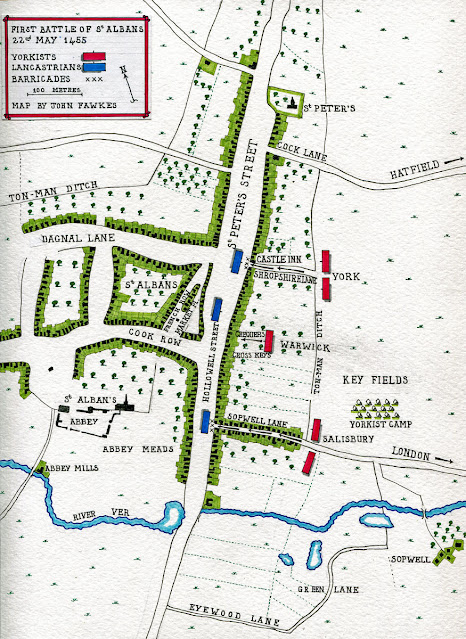 In both maps the various battles of the protagonists are clearly shown, facing off across the area between the Ditch and the edge of the town.
St Albans itself is characterised by a high street running through the town north to south and several key buildings are marked such as the Abbey, St Peters Church, the Bell Tower (now St Albans clock tower) and the Castle Inn where the Duke of Somerset met his end. 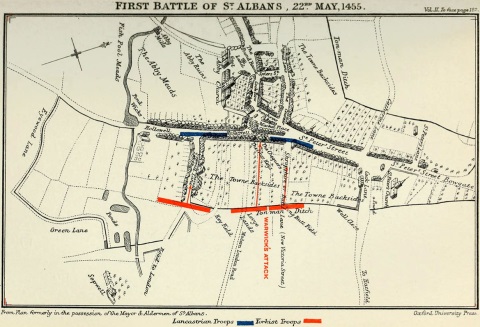 To the south of St Albans lies the River Ver and three key roads run into the town from the east. Using the top map I gridded this up for a table in the shed that would be around 5ft x 12ft for the game.

The Grid represents the table with one edge being the back of the town, the other the area beyond Tonman ditch.

The next step was to set up the table using this grid as an approximation of the terrain. The following pictures illustrate this. Fortunately I am blessed with a large number of buildings that can be pressed into service as medieval dwellings. Although the Abbey and its church is further west I have pressed into service my large church. 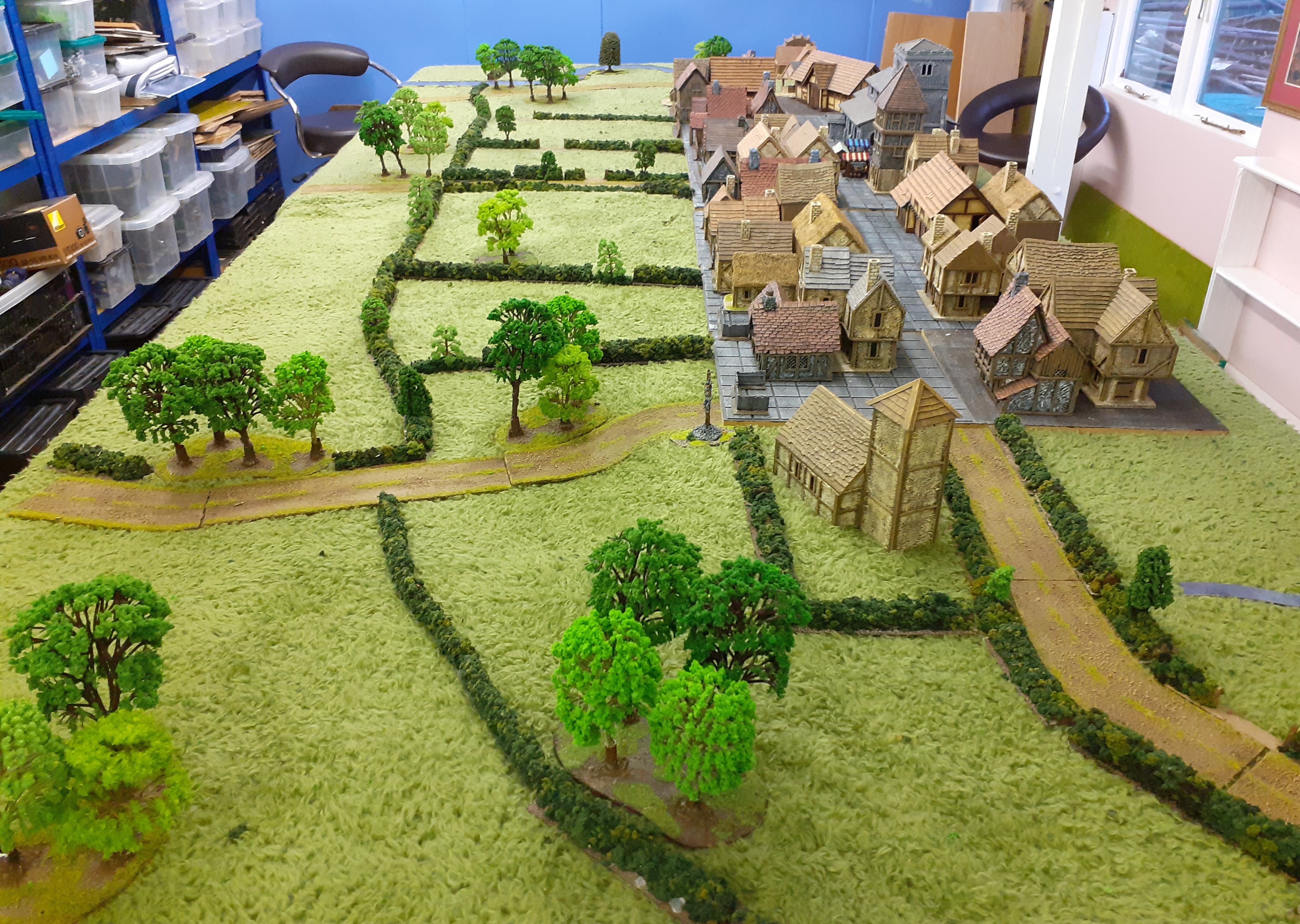 and from South to North with the River Ver at the bottom of the picture. 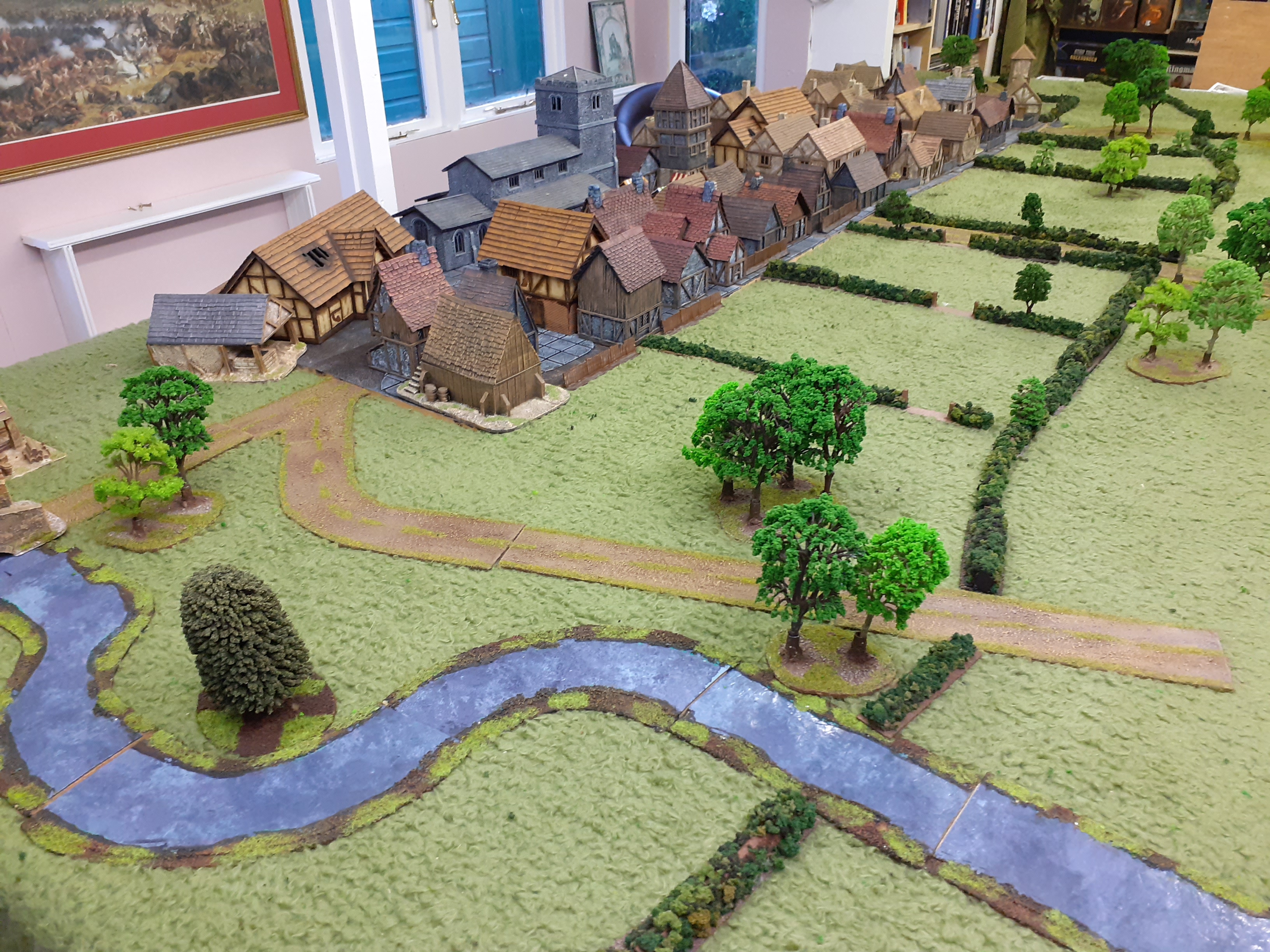 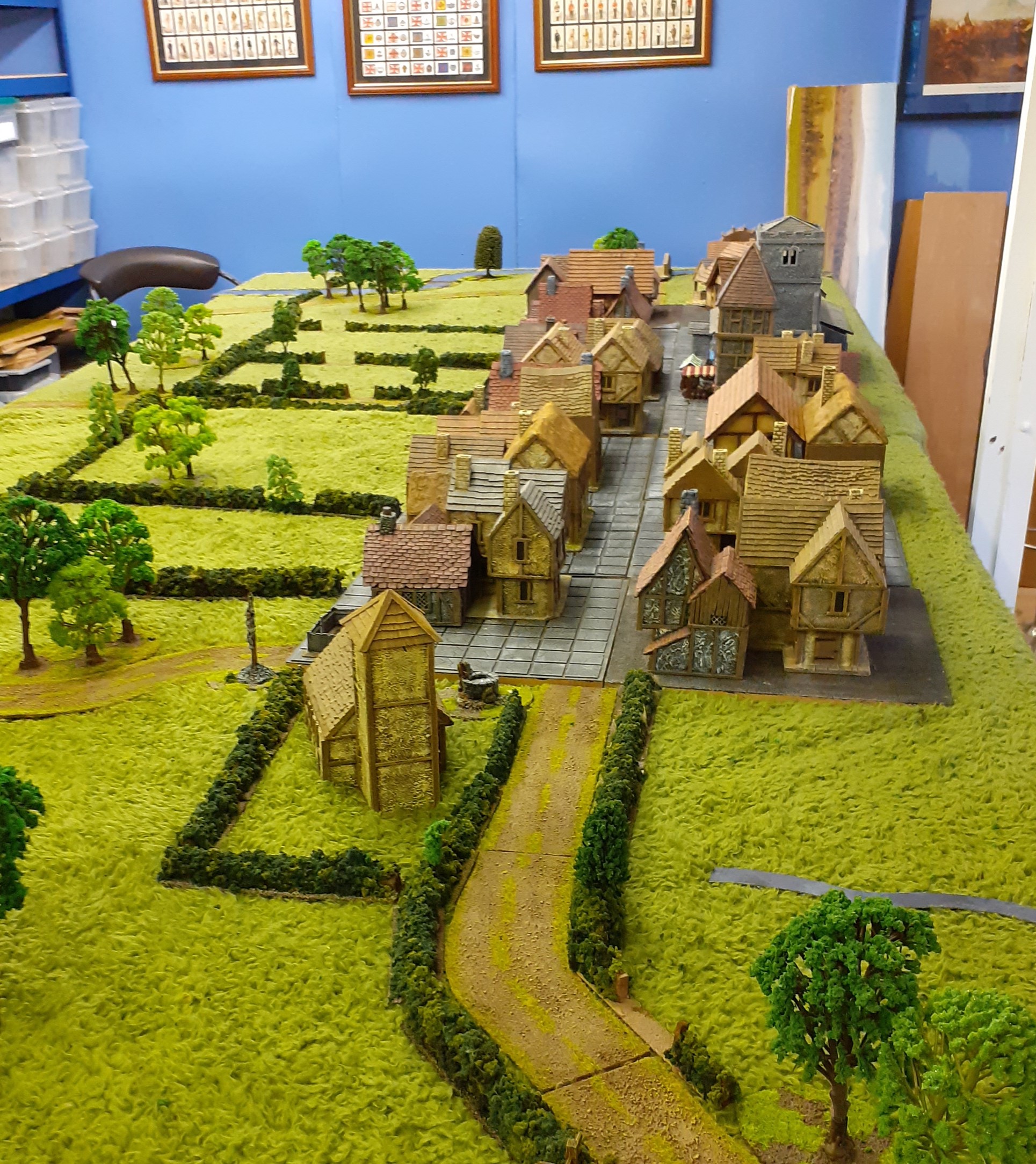 The Abbey (large Norman church pressed into service) and the clock tower to the right.

The North edge of town.

and here we can see the three key roads running into St Albans from the East with Sopwell Lane just in the foreground. I have used hedges to denote Tonman ditch and added a few lateral hedges to reflect the maps illustrated. 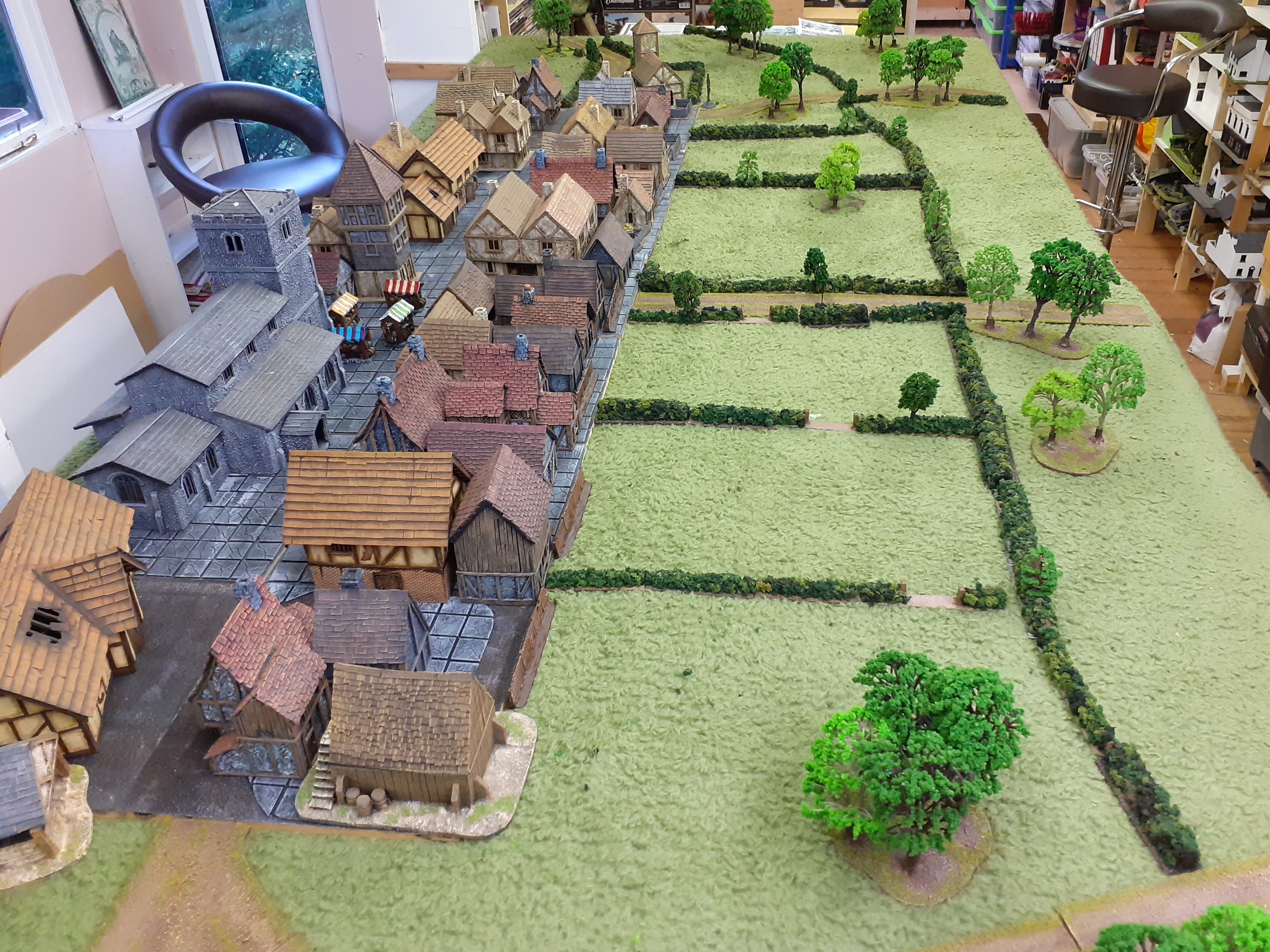 Key to making this game work and avoiding the need to move buildings etc I have clustered all my houses into blocks with plenty of alleys running into the high street. It will be up to the Lancastrians to defend these as best they can - afterall they cannot be everywhere.

With the table set its time to move onto the orders of battle. For this I have used both some common sense, the sources listed above and the following excellent booklets. 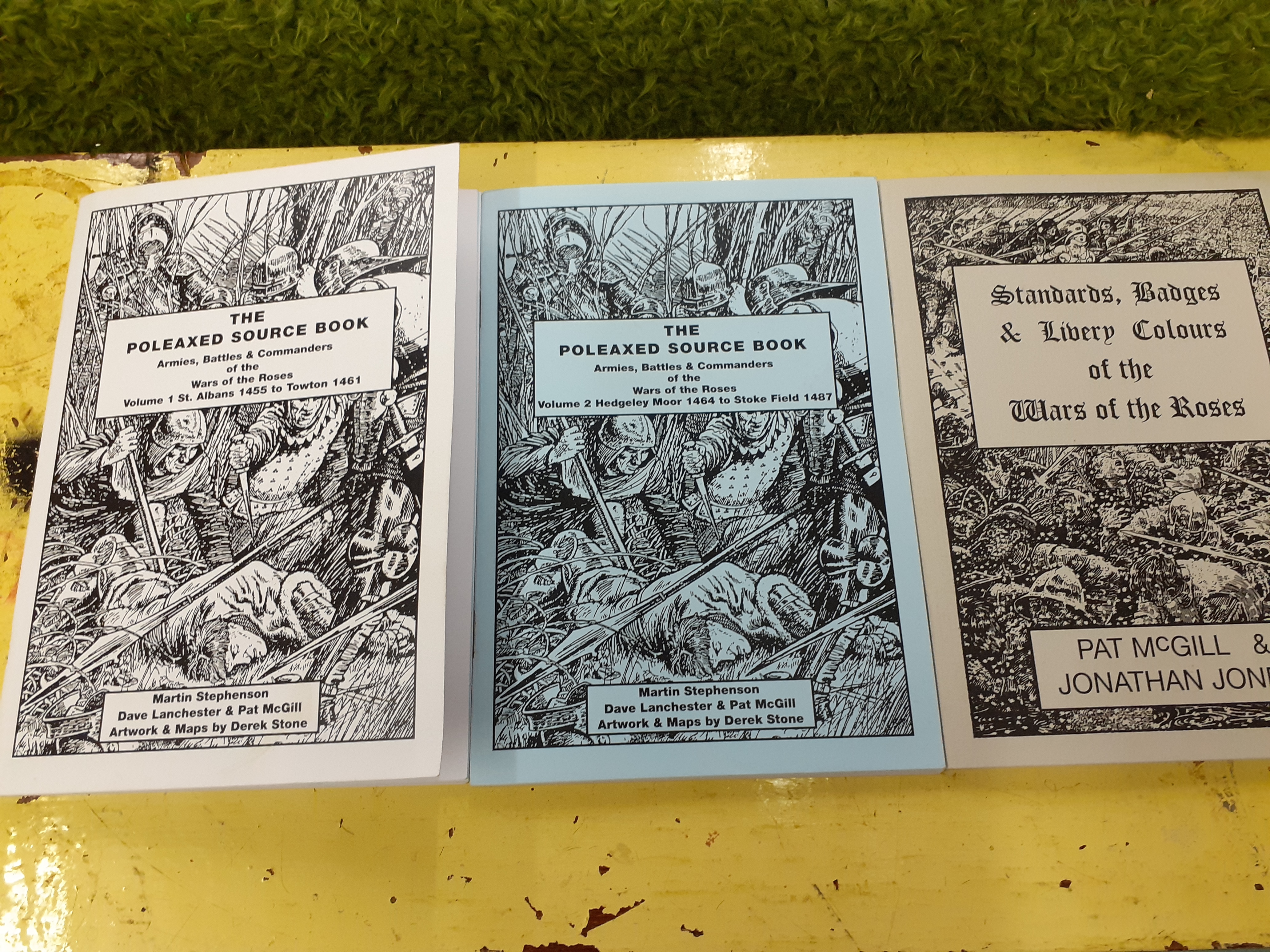 The Poleaxed books list the following commands. These books really are a fabulous resource as they list by name all the major combatants, maps of the battle and a list of forces.

As stated above the Yorkist forces were about 50% bigger than the Lancastrians so not only will this be reflected in points but also number of units.

No Cavalry or Artillery was referenced in my sources so will not feature in the battle.

The following is my attempt to create the forces present at the battle listed by command. The Yorkists have been given two additional commands of Cobham & the Earl of Kent so every player has three Leaders (for playability)

The Commands will be deployed according to the Letter codes shown on the Order of Battle. Red for Lancastrian and Blue for Yorkist. Please note these are not exact and forces will 'start deployment from these positions.

All Skirmish uinits (on both sides) will be deployed in the area between the town and the ditch. 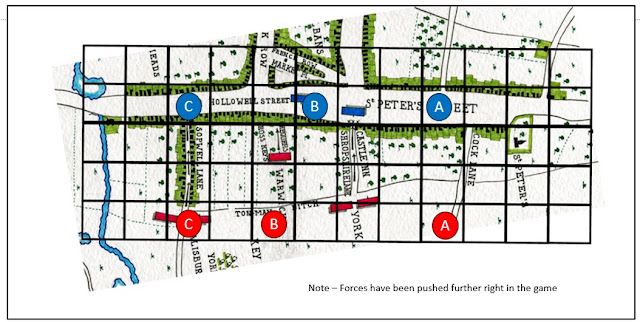 King Henry VI features in the battle but to all accounts he is a useless commander (Dolt) and has two wounds/adds no benefit to combat dice- he is attached to his small personal retinue of men at arms (half size unit of veterans) that will stay with him for the whole game. He will NOT move from the Market square.

The Lancastrians either have to beat the Yorkists or they lose the King. Think of the game as a 'capture the flag'.

The town edge is punctuated by a number of alleys as well as the main routes in. These will all take approx three figures wide. So I have proposed a new formation is developed. This will be known as the fighting block. The unit will have a frontage of three figures and will be 4 figures deep. Moving from line (default) to fighting column costs no order nor does it cause disarray. Think of this as a natural act of funnelling troops. Could be used for crossing bridges etc

In attack the front two ranks can fight and in defence the front three ranks. Otherwise the rules are exactly the same.

Archer units firing down alleys will be limited to the two front ranks firing (ie six dice) and this will still count as one volley. 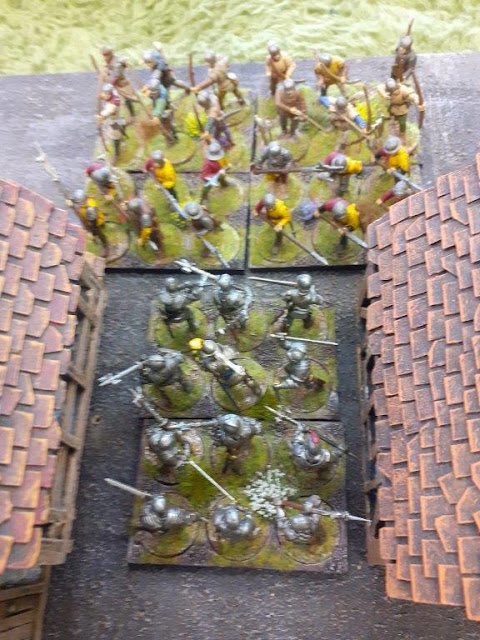 Prior to the battle the Lancastrians have been busy and barricades line the edge of the town entry points. These will count as normal obstacles but once crossed for the first time they will then be removed from play.
Starting the Game: Unlike a standard game of NMTBH we will go straight to the card deck. The rationale for this is simple, the Lancastrians were caught off guard by the attack and as such we need to limit their maneuvers at the beginning of the game. The Lancastrian skirrmish units will be deployed in advance positions between the edge of two and the Tonman ditch. They can activate on the Lancastrian skirmish card.
However in the first turn only one random Lancastrian command card is shuffled into the deck (not Henry VI). On turn 2 two more cards are added and on turn three all remaining cards are added. All Lancastrian units (bar skirmish) start with one disarrayed token. This should allow the Yorkists to clear the ditch and advance onto the edge of the town.

Next up (when fought) will be the battle report. Which you can now read HERE