Since April of last year I have been working my way through almost a thousand 28mm figures for my Dark Ages project and although I didn’t quite complete all the figure painting by the New Year – two days later I could finally lay down my brushes.

This has not been a fun project and there have been plenty of times along the route where I have cursed and almost cut my losses and sold up. However perseverance has paid off and I can finally relax. Almost – there is just the small job of basing these troops.

Some of you might be asking why this was not a fun project and I think I can distil this down into a couple of simple statements. The first is that pretty much all the units are the same – chainmail and more chainmail. To get the randomness of what you want from a dark age force this means there is no continuity in the clothing (other than chainmail) so that means every tunic, set of leggings and shield has to be different for each man standing next to another. The second reason is also very simple my ambitions were too big – I needed two forces (Saxon & Norman) that would look sufficiently large enough on my table. To recreate Hastings (the first game planned) needed a sizeable number of troops (aka units) for at least three players either side. This roughly meant I needed to create at least 30+ units a side for the [players to command a reasonable number of troops.

I also rather foolishly decided that no troops would be finished off until all the figures were painted. This ultimately meant I didn’t see the progress of the finished article coming to the table until the very end. From a motivational point of view this was not good and for future projects I’ll go back to my tried and tested route of finishing off units as a project comes together. So enough soul searching – lets celebrate the first units to be completed.

In this post we are going to focus on the Norman Infantry – these have almost all been sourced from Conquest Games (there are a few Gripping Beast Saxons mixed in with Kite Shields). 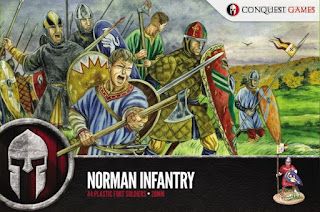 For the great value of £20 you get 44 plastic figures in a box. Each box contains 8 sprues with five different posed and clothed figures and two command sprues (each with two figures).

The figures themselves are fine (most see to be advancing) and where there are sufficient kite shields to kit out all the figures there is a rather mixed bag of weapon poses to choose from.Spedifically not enough spears being carried upright.

Rather disappointingly the arms are not interchangeable with the Gripping Beast range. Each main sprue consists of two armoured chaps (one in mail and the other in scale) and three that appear to be in cloth tunics. I decided early on that the armoured boys would be separated from the non armoured chaps to create two distinct types of units.

All these figures (as have my entire project) have been based on either 5cm x 5cm mdf bases or 10cm x 5cm bases (sourced from Warbases) – typically the armoured units are based in 4’s and 8’s whereas the lighter unarmoured folks are in 4’s and 7’s. Units size can be adjusted according to the number of bases and can range from typically 20cm to 30cm frontage. In the pictures below the units are based on a 25cm frontage with a typical unit containing 24 warriors.

This gives me some 7 armoured units and 10 unarmoured units. The bases have all been finished off with sand, static grass and tufts sourced from War Painter on ebay
https://www.ebay.co.uk/str/warpainterscenics

which can be found here
http://shedwars.blogspot.com/2019/01/the-norman-cavalry.html