When you think of the buildings in Last of the Mohicans you think of forts, log cabins and Indian encampments. Given that these tend to be the basis of strategic objectives in Muskets and Tomahawks an investment was going to be needed.

Having trawled the various forums I was drawn to a number of comments concerning the log cabins manufactured by Pegasus Hobbies. Although marked for the 1/72 scale they are perfect for 28mm. In addition they are cheap - two cabins for £10 is good value.

I sourced mine from Hobby Models 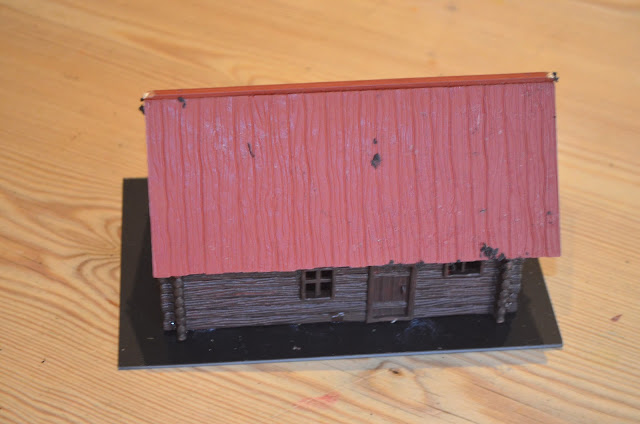 I hate the roofs, in the two cabin set you get one planked roof and one very cheap looking thatch roof.

I wanted something more organic, and before I am shot down in flames (pardon the pun - yes I know thatch is no exactly the most defensive property in a building) I also wanted something that could double up for other games. So I decided the plastic roofs would go in the spares box and new ones would be constructed.

As a result I constructed new roofs from card and have covered in thatch (towelling). The old plastic roofs will be used for later conversions. Given that they have a plank effect they may be suitable for other buildings.

The towelling thatch was bought black. This was a handtowel from Tesco at £3 and is enough to make at least 6 buildings worth.

The towel is soaked in PVA and then stuck on the card roof - allow 48-72 hours for drying, then trim back to the card base. Paint the card base to match the building.

Once all this is dry: drybrush with a light brown and highlight with bleached bone.

The building itself is dry-brushed greys.

The buildings themselves are mounted on plasti-card and the outer areas covered in grit, sand, paint, static grass and clump foliage. Internally I have just painted the buildings brown. The models don’t haves bases so unless you want your tables base colour showing inside I strongly recommend a base. If I was inclined I could have ‘planked’ the floors but I didn’t. 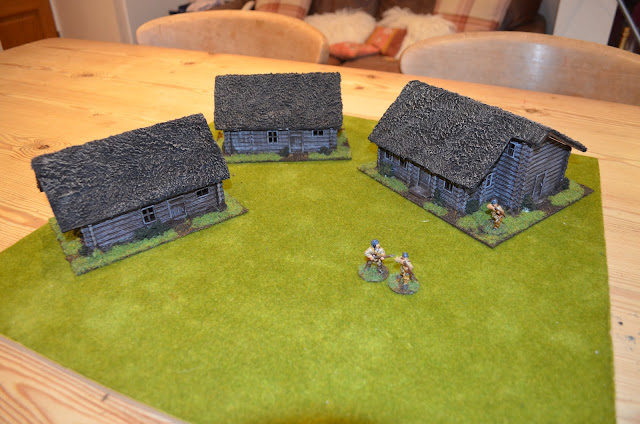 However I soon rralised that three would not be enought - so I doubled the number... 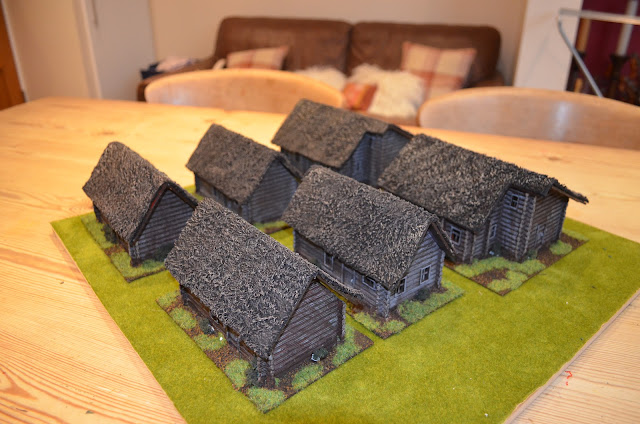