I've done the tracks and they can be seen in a couple of tutorials here on the blog. But what of the trains themselves? Well in this two part article I'll show you how I built a scratchbuilt armoured train for my VBCW project.

Please note that what you might see in the following pages may offend professional modellers. This is scratchbuilding without plans, few measurements and some interesting red wine.

I decided that the armoured section of the train would be based on this two container box section.

The containers popped off easily and these will be saved for some future project involving...containers

The superstructure of the section was built up using plasticard.

This was topped off with a sunken section - will be used for a flak position.

Firing slits using slotta bases added to the sides of the train.

You can see in the above picture I have mounted the gun platforms and drilled in holes.

The guns themselves have had a pintle added using plastic rod

Now when I ordered my gun it turned up all bent out of shape. I contacted Caliver and mentioned that I was not happy - with no fuss they reissued me with a new gun. Customer service was second to none - brilliant !

They also make great tanks for this period.

As I was putting together the train last night the thought occurred to me that if I heated the original bent resin gun over a candle would I be able to bend it back into shape? The answer was yes - so I guess I owe Caliver for another gun. 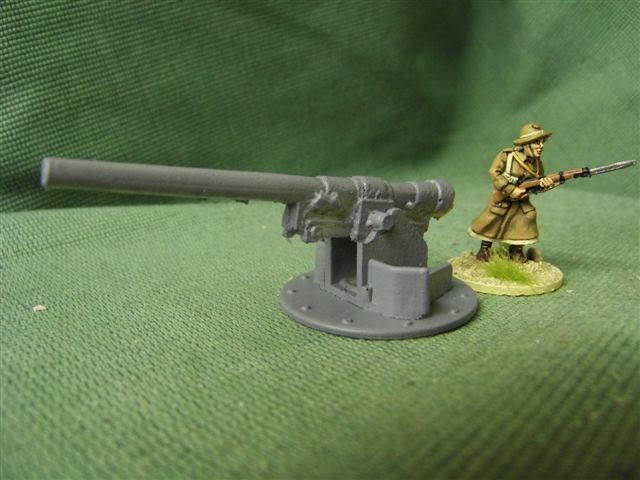 And here you can see the finished wagon. I'll be buying a flak piece at Salute and then hopefully getting this pointed up in the coming weeks.