It was a simple game - three players would take the Anglican forces and force their way up the long side of the table to capture a fuel depot situated at Mustard Manor. BUF forces (about half the strength of the attackers had to delay their advance.

As things panned out the defenders (Mark & myself had a torriod time) - we failed to hit the proverbial barn door and inflicted virtually no casualties on the attackers despite our defended positions and hidden deployment.

To be frank I cant be bothered to write up the report but here are some photos from a most thrilling game (especially if you were attacking (Rolf, Alastair and John)

As you will see from the pictures there were lots of rivers, canals and bridges. Even the railway embankment came into play....

The attackers in a variety of motorised vehicles arrived... 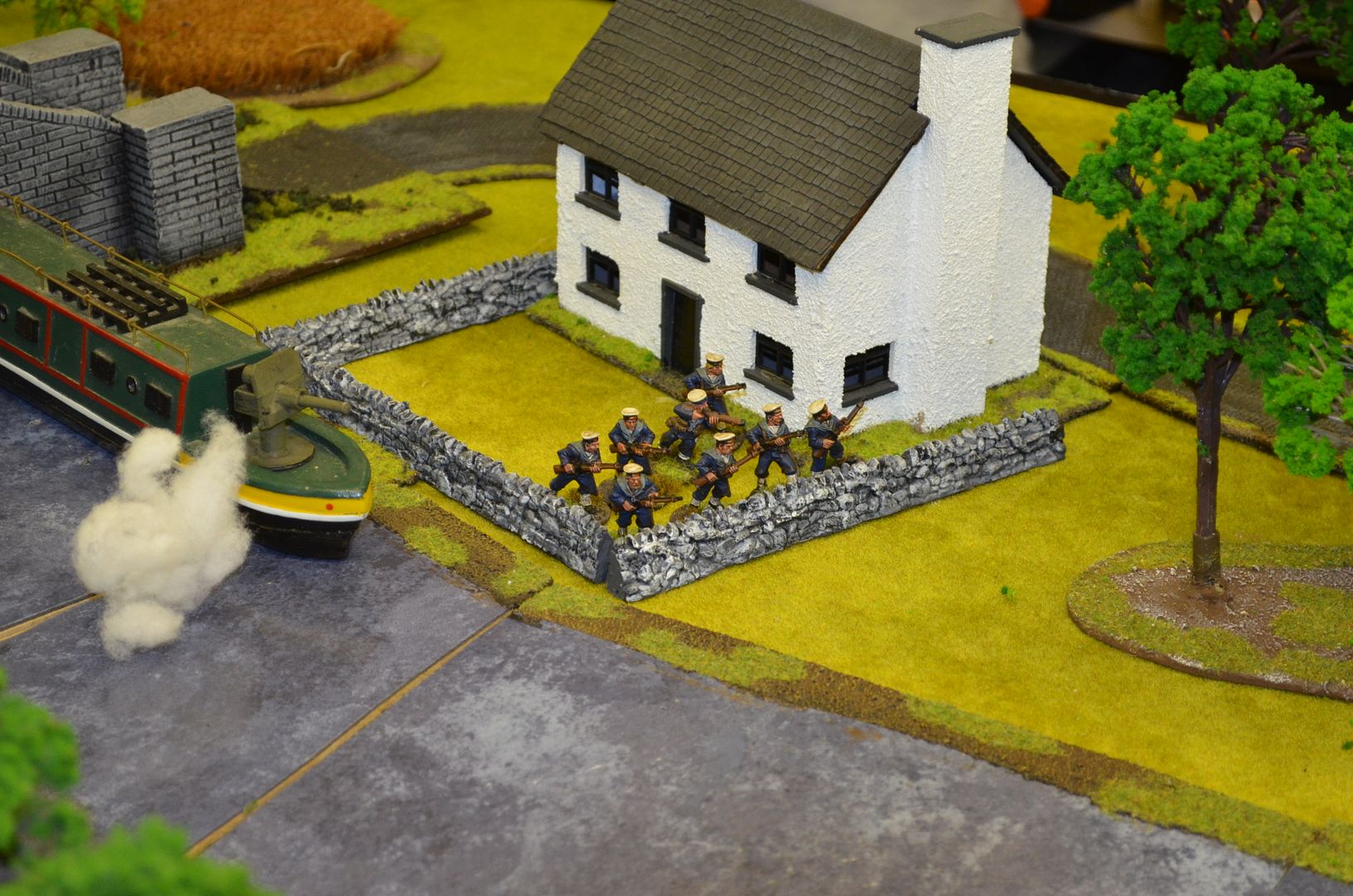 The pillbox in the distance held an AT gun - it fired about six times - every one a miss !

Moving on up the river

Troops begin to disembark for the assault

Over the viaduct here they come !

Did I mention that the League had aerial support as well as off table artillery. Both were used to deadly affect 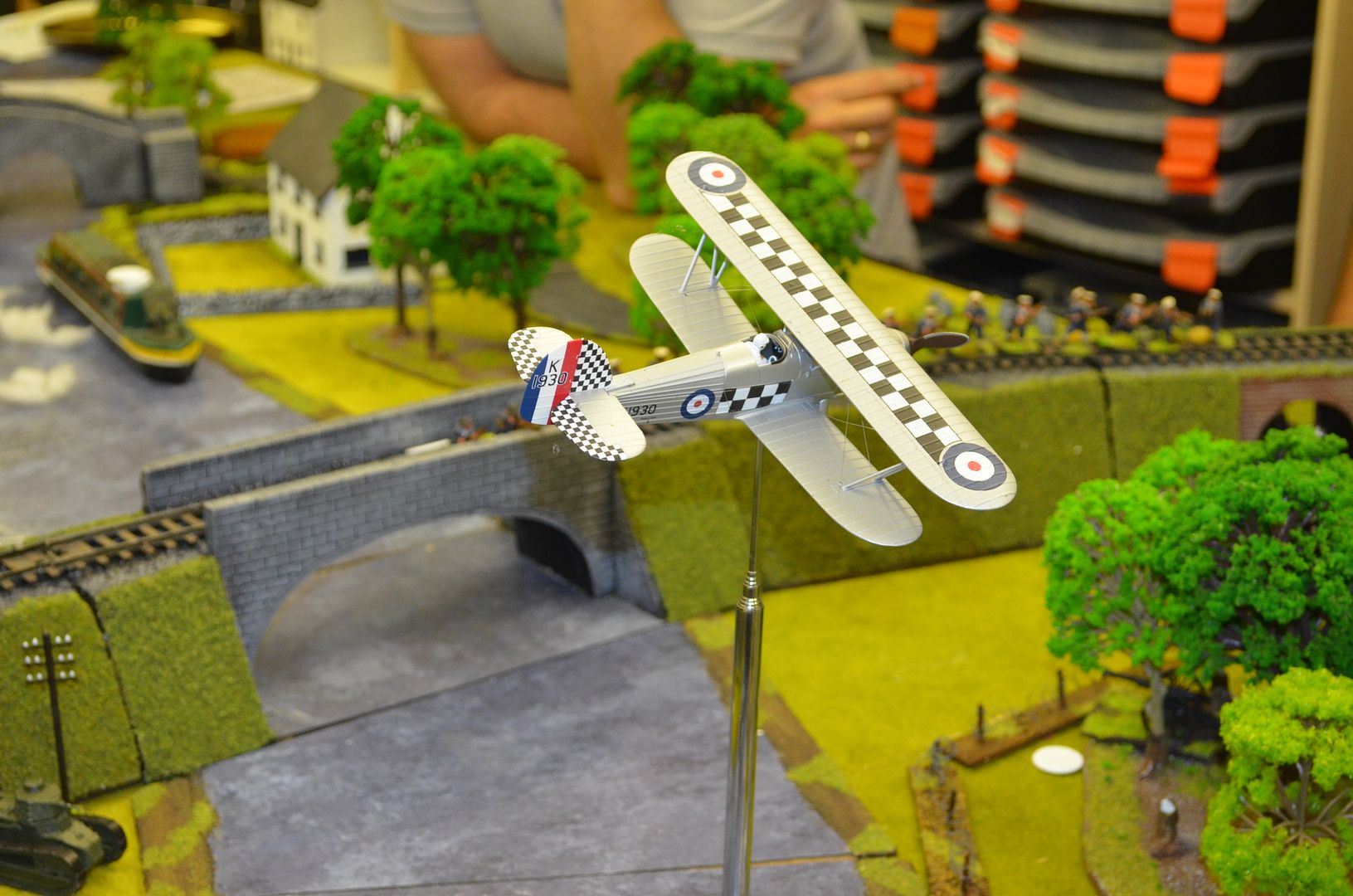 On Monday night we tried something very ambitious in the Shed - I decided we would try and play a siege game using the latest supplement for Pike & Shotte. I say ambitious because the Parliamentarians not only had to scale a huge city wall but also fend off a Royalist relief force.

I had anticipated six players and according set out the sides with three commands on each. Sadly one player dropped out at the last minute so yours truly ended up commanding both an assault force and the Parliamentarians intent on holding up the relief force. I was knackered by the end of the evening.

But what to call this battle, well sometime ago we fought a Very British Civil Wargame in the ficticious city of Southchester and it seemed apt to revisit this place for a battle nearly 400 years ago in the first British Civil War - of course I am talking about the English Civil War

If you interested in our VBCW game fought almost three years ago it can be found here...


The small walled city of Southchester lies on the Essex side of the River Thames. Its about 40 miles from London.
Prior to the War this estuary town was famous for its local eel fishing, a rather beautiful 14th century church and the near perfect Norman Keep.


The City only recently declared itself for the Crown. Parliament has quite rightly decided that this 'irritant' must be removed from their dominance of London and home counties. Raising troops loyal to the Parliamentary cause Sir William Guthrie has marched swiftly to the town and has decided an all out assault would be wiser than starving the locals out.

His local sappers have advised him that the masonry of the walls has fallen into disrepair and that his sizeable artillery train should have no worries battering down the towns defences.

Guthrie knows that he has to move quickly to suppress this insurrection against government rule as forces loyal to the king are approaching rapidly.

Our game starts on a damp friday morning - the Parliamentary forces are assembled for the assault. The large siege guns have been battering the walls for the past two days and a breach is expected soon. Scaling ladders have been distributed across the assault troops

The defenders are on the ramparts are waiting...

I haven't posted up orders of battle but suffice to say the attackers outnumbered the defenders about two to one. The defenders could only call on light artillery (postioned in all the towers bar one whilst the Rebel forces had in the region of nine medium and heavy pieces.

These religeous zealots can be used as command stands to rally troops in much the same way as an officer. They have a command rating of 7+ and can move 12" (18" if mounted). They cannot be targetted (no point in having god against you)

The Siege guns begin to belch their deadly load...one of three large batteries. The Attackers strategy was simple create some breaches and charge....

Its all very quiet on the right flank

The Attackers wait until the guns have done their deadly job....

We didn't have to wait long as the first curtain wall gave way....

By now the first of the Royalist relief force had arrived under Brigadier Rolfe....

A second breach soon followed the first - cry havoc and all that !

The attackers continued to advance along the city walls 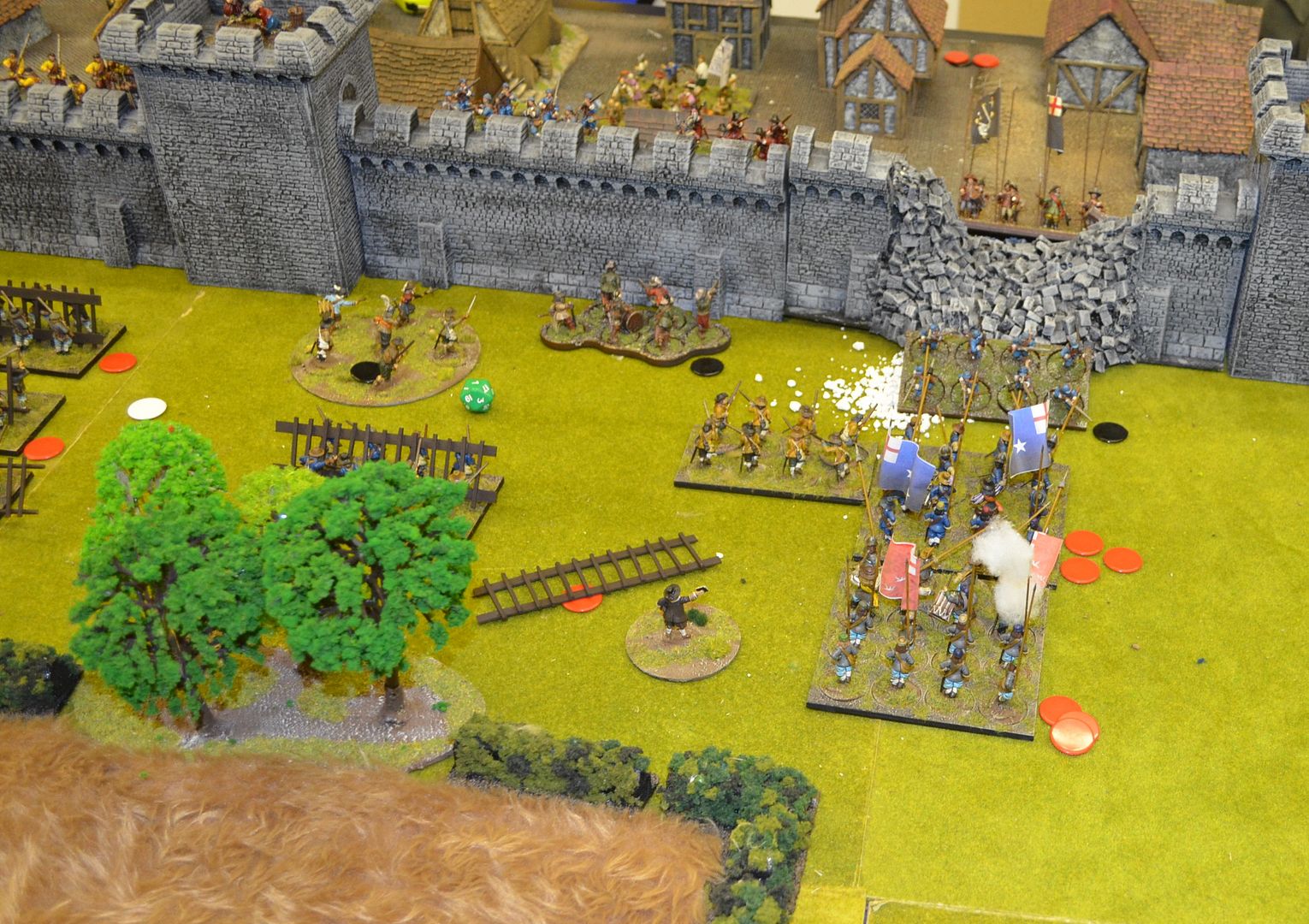 The left wing pike advance towards the now destroyed gate

Over on the right wing the Parliamentarian vavalry is coming off worse ion a firefight with the Royalist relief column  - but they are doing their job and stalling the advance. Can the city fall berfore this wing crumbles

The breech on the left is plugged with a defending pike unit...

Reinforcements are rushed to wall expecting an imminent attack

The gates become a focus for defence 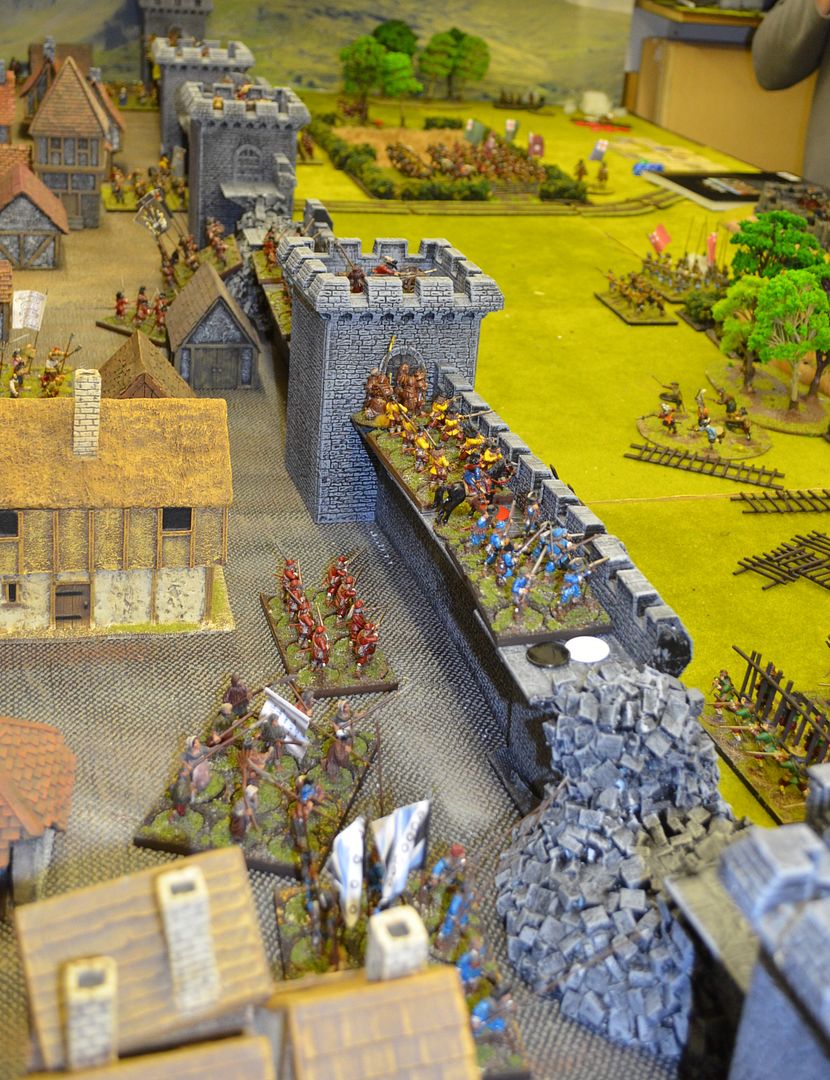 Over on the Rebel Left I throw in a Pike Unit through the gate - routing the defending unit.His supports have a different view....

The Rebels continue to mop up along the Wall...its looking desparate for the Royalist supporters

A final volley from the left wing musketeers clears the ramparts of defenders allowing them to throw up their ladders and reach the parapets in safety... 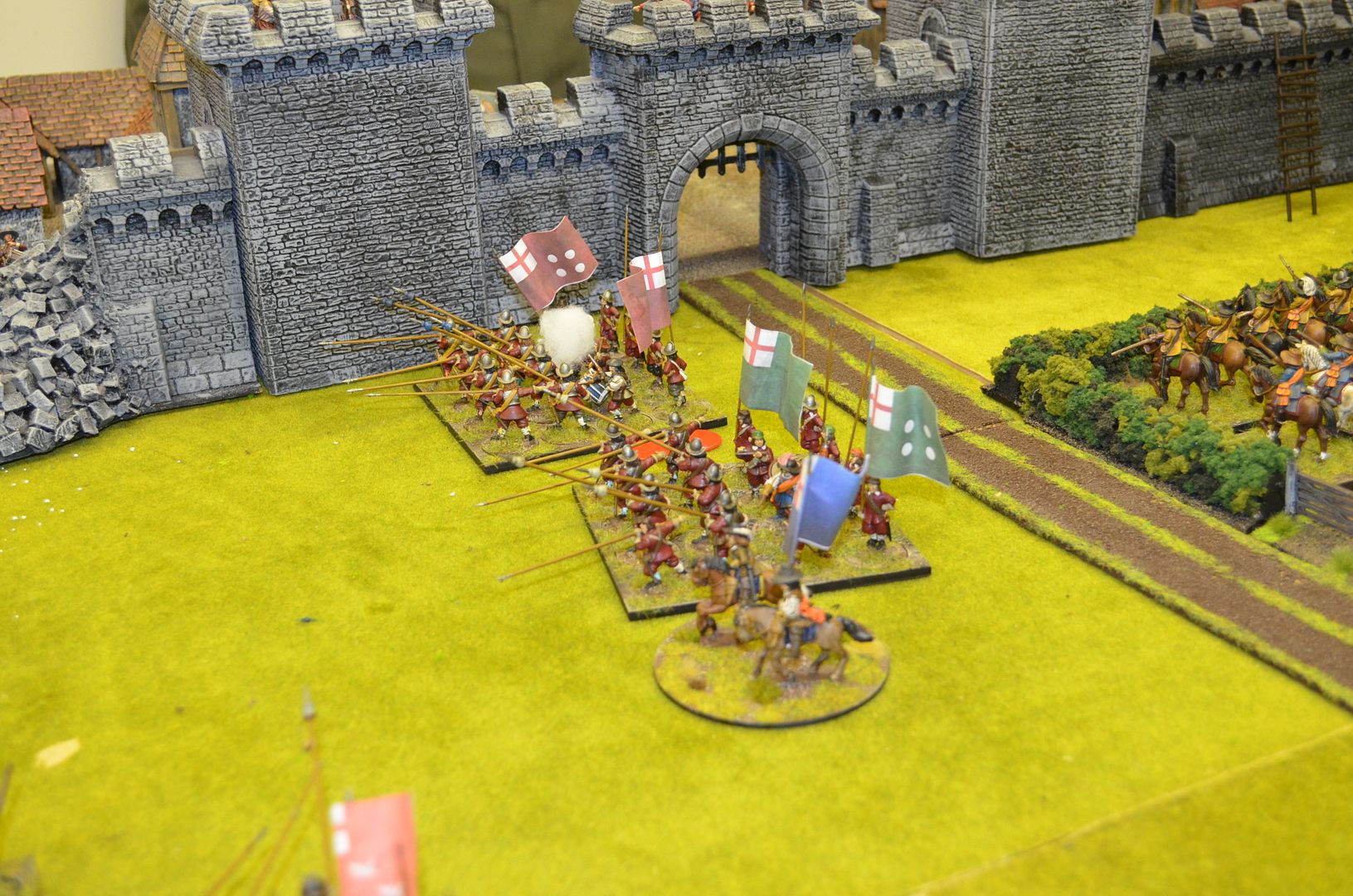 A victory for the Parliament  but at what cost - casualties were horrendous. Virtually every unit had succumbed in some fashion.

A cracking game that lasted about 3 hours -

We'll visit the siege games again at some point in the future - thanks to all those that took part
Posted by Eric the Shed at 14:59 12 comments: