Postal Service - Action from the VBCW

A couple of weeks ago saw the shed return to the fields of England 1938 for a spot of VBCW (Very British Civil War) – I hastily set up the table as soon as I got home from work and started to think about the scenario we might play.

Stop Press: Apologies for the delay in this post - it was written but I didn't press publish ;-)

It is my host opinion that the more effort you put into the games plan the better the result but what with a full weekend working out in the garden and my new job sucking up most of my weekly free time this was somewhat rushed. The game was called ‘the Postmans delivery’.

Anglican Forces (represented by the Cornish Workers alliance and the Postal Brigade) were issued with the task of delivering key war materials to allied forces  fighting around Guildford. Standing in their way were Fascist BUF forces. The Anglican forces had a simple job – get the war materials across the table (lengthways). Four postal trucks were available with only one carrying the delivered goods.  This was to be a straightforward push to line game with speed of the essence. Should the league not make the exit point by the end of game play or the postal truck carrying the goods destroyed then it would be a victory for the blackshirts.

First up a few picture postcards of the table . quite pleased with this one and the green throw from Dunelm looks fantastic

Initially both sides were relatively evenly split but the League would receive allied supporting members of the Royal Hampshire Constabulary (when Rolf arrived). The BUF forces (Mark & Alaistair) would dice for their entry point onto the table whilst the Cornish & Postie units would enter from the road at one end of the table.

The table stretched over 14ft and was crisscrossed with roads but only one of these ran the full length of the table. A singular choke point was created at the level crossing just outside the village of Little Snatch. We expected this to be a makjor point of contest and congestion.

The postal trucks themselves could elect to drive across country but hedges and railtracks could cause issues. Vehicles would bog down on a 1 or 2 (d6) traversing these. With such high odds of stranding the vehicle not surprisingly all transport used the roads.

The Following pictures were taken from the game 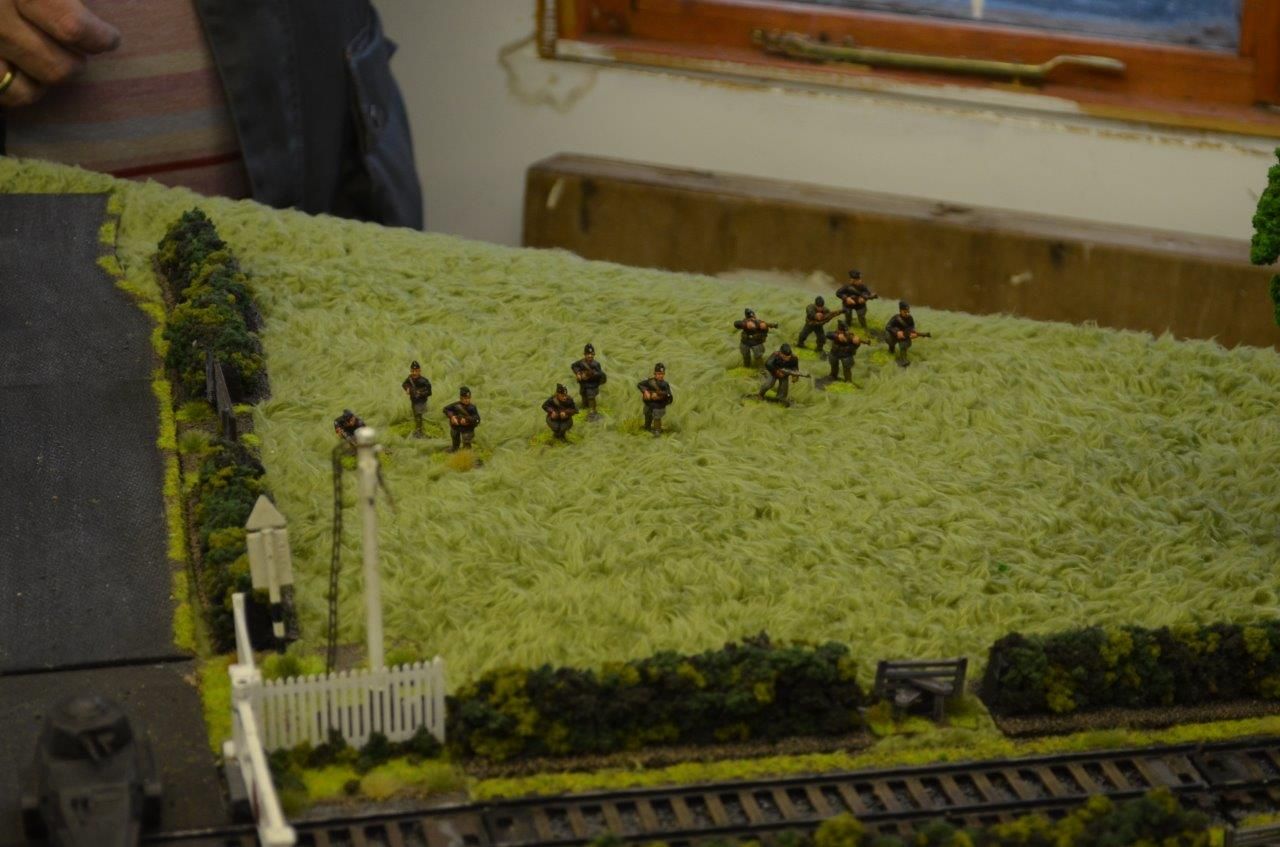 The Postal Infantry arrive and head towards the town

The BUF start to take up positions

The convoy enters from the right in the picture below

and here it comes...the Fire Brigade Union supporting the cPosties have brought along their armoured car

The Fascists now wait at the level crossing 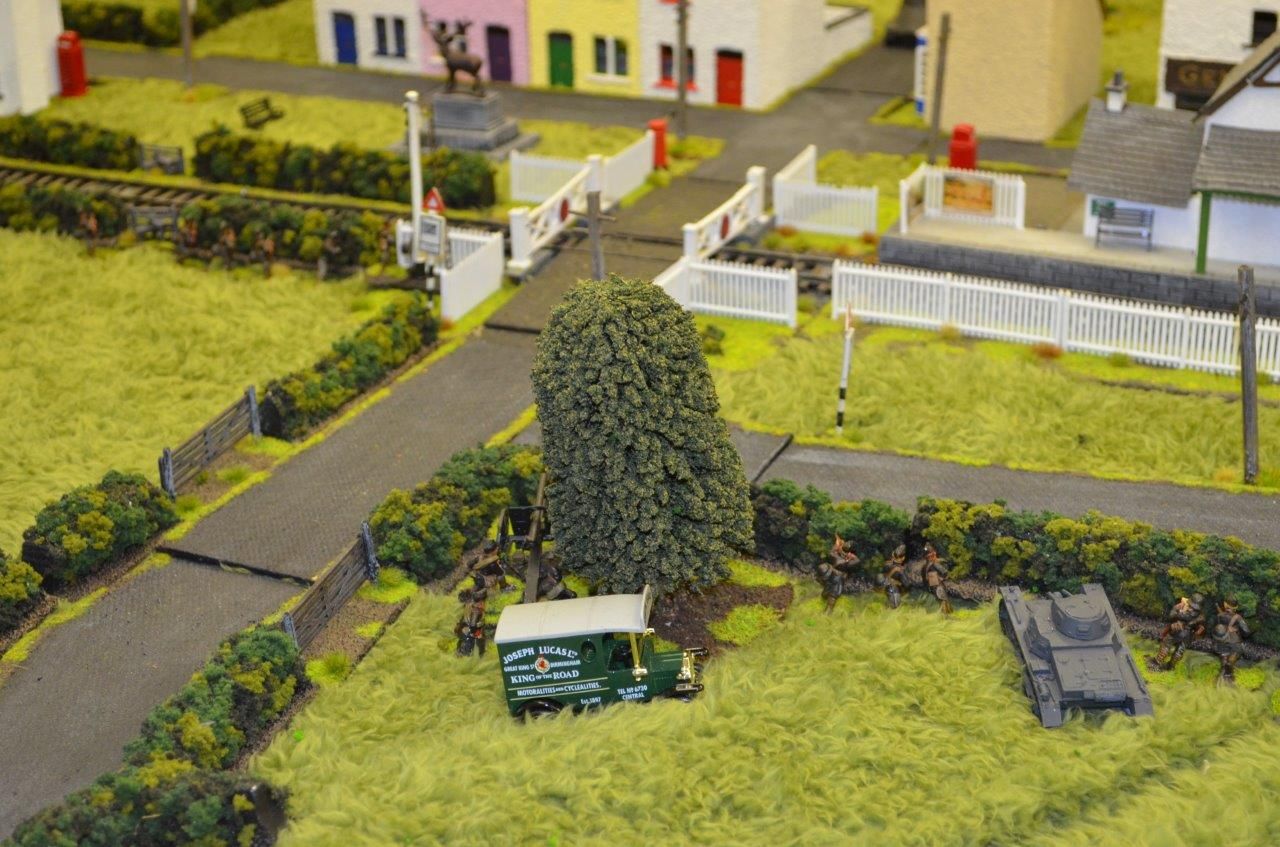 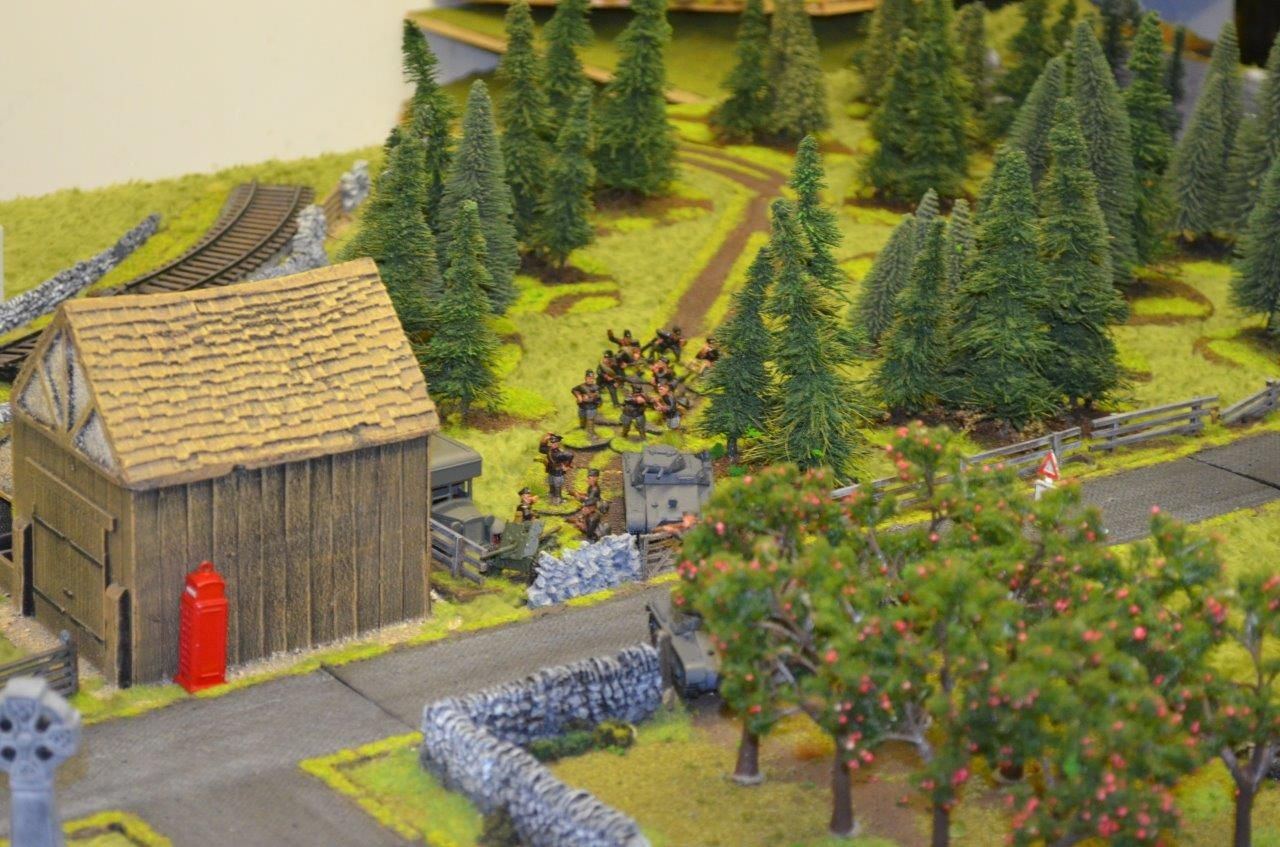 The convoy trundles forward - resplendent in their red vehicles

First contact - the BUF engage the enemy along the rail tracks

Retreating from their first line of defence the Blackshirts dig in again...

Whilst the infantry unit scamper through the terrace house gardens

The Posties push up the trail tracks 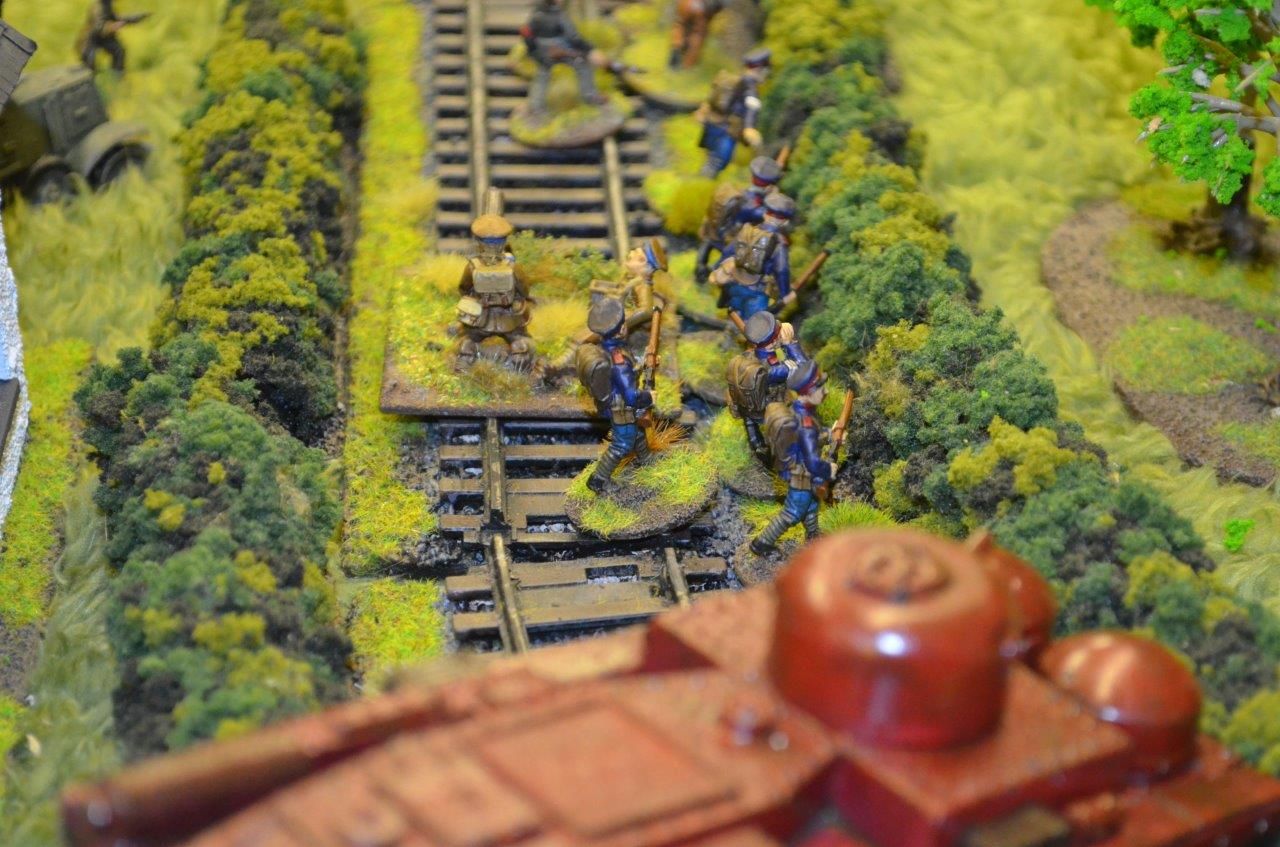 The Navy boys have done it - splash one BUF armoured car

A Postie truck races along the road - Bang ! - its taken out with an AP round

The bobbies in blue push forward towards the station 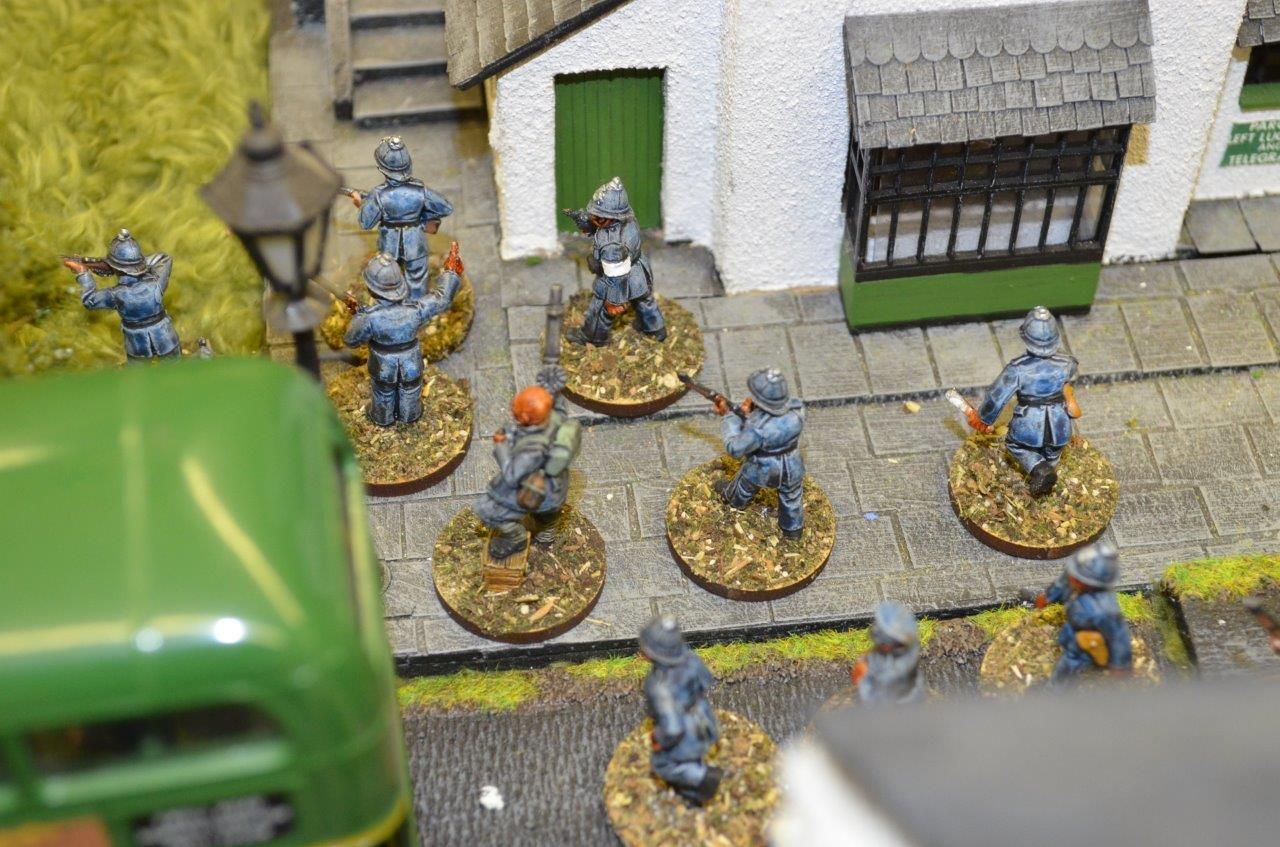 Things are looking rather congested over the crossing

Big Red forces her way up onto the main road

More smoke as the defending forces lay down significant fire

Despite heavy artillery fire the defenders just wont be moved...the convoy retreats to fight another day...

Peace and calm returns to the country lanes of southern England 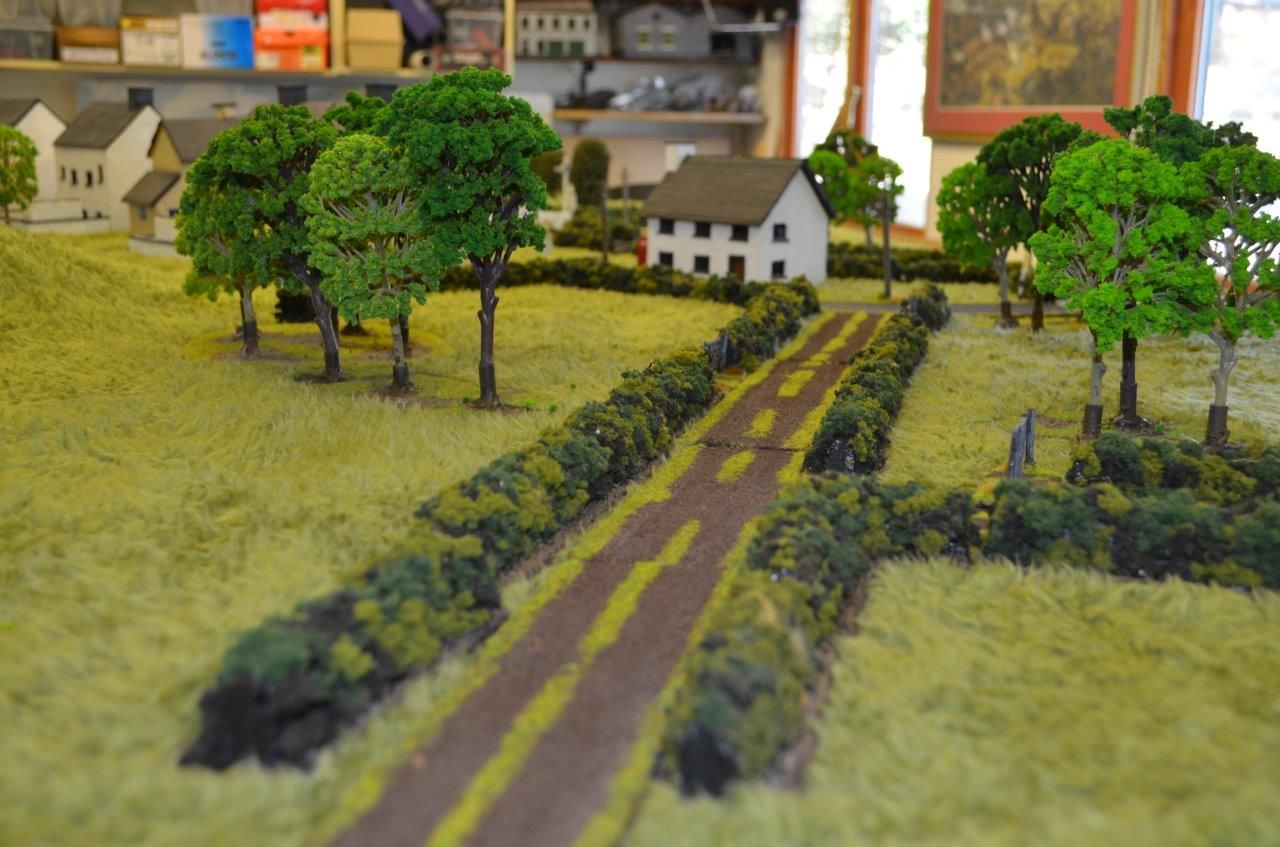 How did it play?

Well not surprisingly the Post did not reach its destination on time. The Fascist forces put up a stubborn fight around the town and by the time the evening ended it was clear that the Royal Mail would not accomplish their task.

Great game and more soon from this genre

Fist Full of Lead up the Khyber Pass

And now for something completely different. Over the last few weeks we have been cracking through a number of games using the Fist Full of Lead rules. These have all been based on the not so heroic adventures of a certain Richard Sharpe in the Peninsular war. If you haven’t had a chance of playing these rules I would strongly urge you to do so – they are great fun, deliver a wonderful narrative and can work across so many periods.

A couple of weeks ago one of my regular gamers, Alastair , mentioned that he would like to run a FFOL game using his Afghans and British forces. The significant difference being that these were 54mm figures. Indeed when my father passed away he left behind a number of these figures which I duly passed on to Alastair – this would be a fitting moment.  I have to say that Alastair had done a fantastic job in bringing these little plastic me to life and the jewel in the crown being the Gun carriage complete with six horses, limber and gun. The last time I had seen it was in a dusty cabinet in my father’s study. I am pretty sure he would be very chuffed to see this unit grace our table.

Anticipating six players Alastair had provided five men for each player. Both sides had a mounted unit. In the end two of our number failed to materialize so the table saw a solus infantry game.

The objective simple – the British forces had to escort the gun time up the Khyber Pass and off the table at the other end. Standing in their way would be the local tribesmen hiding in the rocks and a rather nifty airfix 54mm strongpoint building. This game was full of nostalgia !

The terrain of the table was my desert boards including cliffs, outcrops and a scattering of dried lichen. It scaled really well with the figures and looked pretty good.

The game itself was played in around two hours – I suspect that if our other two players had been with us it might have lasted a little longer.

Apologies for the lack of a full AAR – just so much to do these days but hopefully the pictures tell the story….


Its all very quiet in the Khyber Pass

A lone Vulture awaits for his supper...not long low

The pass stretches on into the distance (subtle use of mirror ;-)

The locals prepare their ambush

Using the cover of the rocky hills....

The local tribesmen prepare to fire on the advancing British infidels

The Gun Carriage crashes forward over the bumpy ground

Soon the valley erupts in gunfire - the carriage presses on.

Seeking cover the Highlanders return fire with their Martin Henry's

Fierce hand to hand fighting across the valley

With the gun lost the survivors make a run for cover

A big thank you to Alastair for a great game...