Monday night saw the shed back in action after a four week gap due to really cold weather and I was delighted to welcome Captain Blood of the Lead Adventure Forum to sample the delights of the Shed for a second time. Whilst over at Tactica he expressed an interest in the Lion Rampant rules and knowing that this was on the agenda I duly invited him over.

All told five of us braved a blustery and mildly chilly night but a great deal of fun was had and more learning's developed from our second play of this fast paced medieval rule set. I'll touch upon the 'new' house-rules at the end of this post.

…You may recall that in our last tale the Good and Godly Knight Sir Ivanhoe was bested at combat by the sinister Sir Guy De Guisborne. Unbeknownst to Ivanhoe’s followers he did not succumb to his wounds on the battlefield but rather fell into the clutches of the scheming Sheriff of Nottingham.
For a full battle report of the last game head here...
http://shedwars.blogspot.co.uk/2015/01/tales-of-sherwood-taxing-day.html


Like all power crazed maniacs the Sheriff has high hopes of a good ransom but to protect his investment he has decided to move Ivanhoe to the protection of Greystone Keep at Trentbridge.


Hearing the news of both his friend’s living status and his transfer to Greystone Keep, Robin has rounded up his men and supported by Ivanhoe’s own followers, to attempt a rescue along the Trent Bridge Road.

Ivanhoe’s is currently being escorted by the Sheriffs mounted sergeants.


Objectives:
The Sheriff Forces win if Ivanhoe can be placed inside the Keep.


Robin’s forces win if Ivanhoe can be rescued


Ivanhoe will remain a captive as long as he is within 3 inches of a mounted Sheriff/Ally force. In the event that the force is engaged in melee Ivanhoe will be freed if the attacking force is greater in number than the defending force (horsetroops x2) at the end of the round.


Shooting at a force containing Ivanhoe is the same as a Lucky blow – ie on a double 1 he is killed. However if the entire unit is killed by bows any hits not allocated are transferred to Ivanhoe.


Ivanhoe may only move if he is attached to a unit. 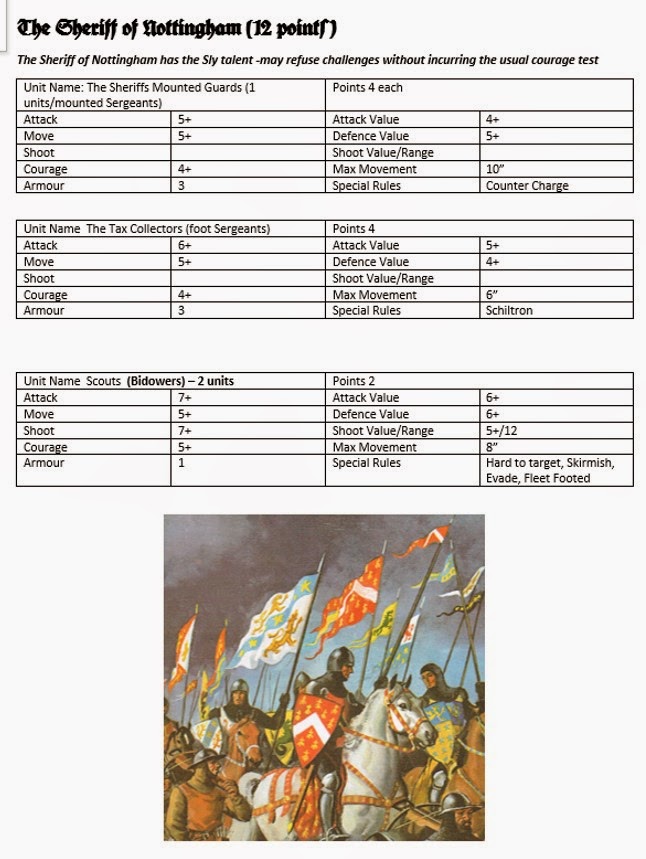 With the orders of battle issued and the troops laid out we could crack on. (Like most games I run in the shed this was already done as it allows for immediate action).

Robin and his allies (including Ivanhoes retinue now commanded by Sir Reginald de Perrins) were spread along the south side of the Trent Bridge Road. To the North lay the Keep of Greystone.

Alongside the Bridge over the river Trent lay the small hamlet of Trent Bridge.

Clearly Robin and his forces had to stop the Sheriffs convoy from crossing the board. By my initial reckoning if all orders were made the Captive could be inside Greystone Keep within 10 turns.

'Block the road' was the order cried by the Merry Men


So as the forces of Robin advanced across the table the Sheriffs escort party marched towards the bridge. For three turns they milled around waiting to cross the bridge.

The Cavalry of he Bishop of Lincoln thundered forward towards the serfs hiding behind the grazing cows.

These poor folks stood no chance and what followed was a swift bloodletting watched on by the grazing beasts.

Battle was set fast in the centre, arrows flew and hit their marks, horses screamed, men cried and cows made milk...

Little John knew no other task than to march forward and confront the rash Guy - advancing closer to the castle they let rip with their clothyard missiles.

Finally our manic Sheriff advanced only to stop again for two more turns !

Little Johns decimating the forces of Guy with withering volleys..

Sir Reginald and his Knights block the road in front of the Sheriffs men..

With his allies either routed or killed The Sheriff still felt that if he could weaken the centre he might still be able to punch through to the castle. But how to weaken them - he must kill Sir Reginald.

Not accustomed to duelling - he sadly didn't last long...the Sheriff slipped from his saddle into a pile of his own horse's s*** - looks like we need a new Sheriff in Nottingham

Robin and his remaining men cheered...wishing they could sing that tuneful hit...'I shot the Sheriff...

Sir Ivanhoe is rescued and Robins fame lives on...

What next in the Tales of Shedwood...

At the close of the evening we had a bit of a chat about the proceedings and arrived at simple some house rules & reminders...

Thoughts on the above are most welcome...

Until next time folks