Encounter in the Veldt - A TMWWBK engagement

Monday night saw the Shed packed to the rafters with gamers, zulu's and redcoats. Following the success of our first Anglo Zulu wargame using Black Powder it was our chance to try out the The Men Who Would Be Kings ruleset.

This post is quite long - and contains the best part of 40 photos. Right at the end is a critique of the ruleset.

With six players (including myself) I decided to throw a fairly large extravaganza using most of the troops I had available. Tonight would determine if I need any more big units for this period.

The unit cards prepared earlier (listed in the post before this one) would be used by all the players.

The forces were quite straightforward and as you see the Zulus are about 50% stronger than the British Force. This will be a good test to see if the points system listed in the book work. 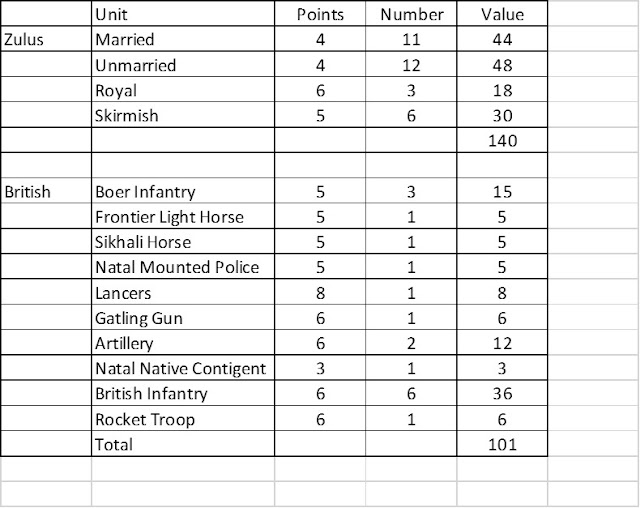 The British were divided into three brigades

The Zulus would have three impis (left, right and head of the buffalo) each Zulu Impi has two units of Zulu Skirmishers

The Zulu units are based in 12's and should be 16 strong. So rather than reduce the size of each force the Zulus all have a small dice which will denote the first four casualties taken.

The battlefield is deliberately open and rather than have forces move onto the table I elected to start with the forces deployed. This should speed things up (he says !)

The winner will be the first player to eliminate 50% of the opposing units - for the British this means 9 units, for the Zulus a massive 16

We were somewhat surprised that no rules for rockets were given in the book so we developed our own. Rockets have a max range of 36” and a minimum range of 9”. Each rocket troop has six die for firing needing sixes to hit. Any six that hits is a casualty and automatically disorders. 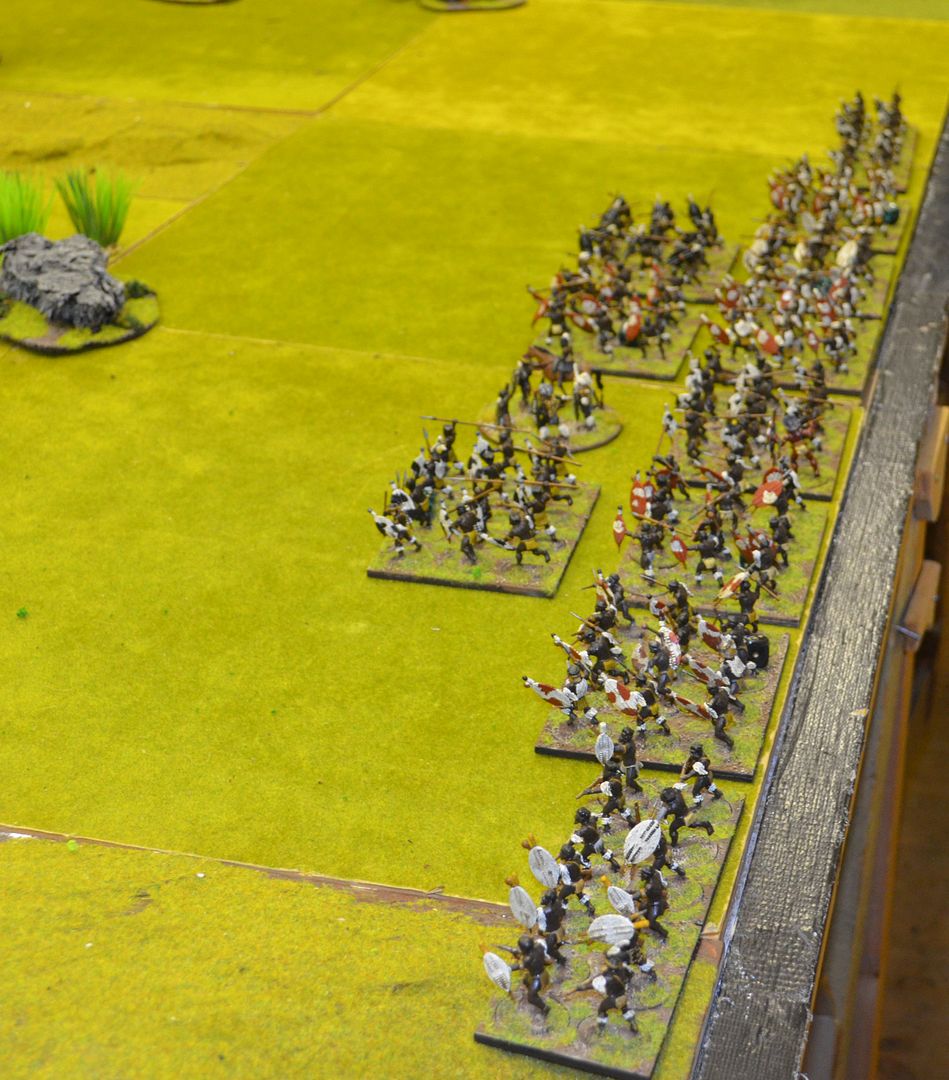 A second victory for the Zulus - they did have 50% more points and probably needed it. Had the forces of been matched they would not have won.

So how did the rules play…..

First up it is probably worth mentioning that with five players I decided to break each force into a series of commands (two on the British and three for the Zulus) – each player had an activation card which were revealed as the turn progressed. This inevitably had some influence on the proceedings and it may well of been possible for one unit to activate twice before the other opponent took their turn.

The idea of these ‘random’ turn orders was drawn from the ruleset for multiplayers.

Personally I am not sure that this works for this period and had we adopted a simple IGOUGO Approach the game might hasve been very different.

Let me explain further. TMWWBK is a very basic ruleset – a unit can only do one thing in a turn (unless it is skirmishing) and does not react to the enemy moves unlike other rulesets for this period.

For example cavalry are unable to evade charges and regular line infantry get no fire on incoming charging troops. If we take the turn order as described above and assume player 1 controls the British Line and player 5 is a zulu impi,  the number five player might have traversed the ground before the British line has even fired. There is no provision in the ruleset for even holding your action to be used as a reaction.

Furthermore there appears to be no penalty for choosing certain actions - whether you order to fire, move or move at the double they all require the same score on the dice. Inevitably all the players moved their troops at the double when they needed the movement as this order also gives you an attack option.

A number of the cavalry units in our game were given skirmish capabilities as their free action (Sikhali and frontier light horse) – this felt appropriate for the troops in question.

They had the speed and the limited firing capability but on at least two occasions these horse were unable to retreat from the massed ranks of Zulus. Indeed failed orders meant they could not even move. One suggestion might be to give ALL units the free action of retreat away from the nearest enemy. This would allow cavalry in part to escape hordes of unrushing  tribals.

I need to go back to lion rampant to see how evades are treated in that rule set because this is a crucial element of the game.

Something else was discussed but did not actually occur was the issue of counter charges – like evades there are no counter charge rules.

I mentioned above that there is no provision for closing fire (unless of course I have missed this) – again this appears to be a big omission. Regular infantry (indeed all firearm troops) should be able to deliver closing fire before a charge ploughs in. Perhaps this is best served with a leadership check and /or maybe only half the units fire.

This leads neatly onto the impact of shooting/hits in melee. At present when a unit suffers casualties they must take a pinning test. This is completed by rolling 2d6 and from this total subtracting the number of casualities. The result is then compared against the units leadership value.

For example a Zulu unit suffers 3 casualties from incoming fire. The unit rolls 2d6 and scores an 8 – subtracts 3 (for the casualties) leaving a score of five. Because this score is lower than his leadership value (7+) the unit is pinned and forfeits any actions until rallied. In principle this works well. Let us assume the same unit suffered 9 casualties from the same fire and rolled the same dice – the result is the same despite the deadlier fire.

In the following turn the Zulu player tries to rally the unit – regardless of how many casualties suffered the rally result is driven by the number of pins. Rallying works similar to pinning except the only minus is the number of pins NOT the total casualties suffered. I think a trick was missed here in the rules. Firstly pins perhaps should be accumulated according to the % troops killed in the first round of fire – eg 1 pin for up to 1/3rd of figures in unit (remaining) and two or more pins thereafter. This would make rallying badly shot up units far harder and more likely to rout.

Our problem last night was that we had a number of units left on the table rallied but with less than 25% original strength. I appreciate the game is based on small skirmish actions and not the vast numbers we had in play.

Melee is handled in much the same way as shooting for casualties (but using the units melee fighting skill) with only the loser taking potential pins.  In one melee we had 12 regular line confronting a zulu unit. Both sides suffered over 50% casualties and neither side ending up pinned.

However the big missing point in the rule set is attacks to the flank or rear. In evitable when you have formed troops, cavalry charges etc. We introduced a simple houserule by saying that only half the units could fight if attacked from these quarters.

In summary the following will be adopted by the shed with immediate effect:

If the above sounds like a poor review of the system I apologise to the author. This is not the case. We had a great game, it flowed quickly, delivered a result that most players felt was in-keeping with the period and was perhaps most importantly incredibly easy to pick up for those unfamiliar with the other games in the stable.

There are issues that need to be resolved not least of which is the ability for a unit to react to events and the impact of these events. We will almost certainly revisit this period using these rules with our own tailored version. Afterall Mr Dan Mersey has created a great canvas on which we can paint…

Whats up next – well given the table is set up and the forces can be rearranged we are going to fight the same battle using Black Powder. It will be interesting to see how this plays out.