The First Sudan Battle - In the Balance part 14

If you have been following this blog you have probably noticed that I have been spending an inordinate amount of time concentrating on my 28mm Colonial Sudanese project. With the majority of the figures painted it was time to get them on the table.

Some 700+ 28mm figures marched onto my desert terrain. This was going to be a straightforward engagement using virtually every painted figure. We used the Black Powder rule set supported by the army lists from the Blood in the Sand Campaign book.

This was a purely ficticious battle and I was keen to see whether the forces I had amassed on both sides would deliver a balanced game. I think it is fair to say that the early reports from the battlefield suggested the Allied forces of British troops supported by their Egyptian allies would make short work of the tribals. As you will see from the reports this somewhat changed during the game.

Both forces were spread across the table with the following orders of battle.

Allies on the left and Dervishes on the right

The Mahdists had four brigades with each command controlling a unit of rifle armed skirmishers, a cavalry or camel unit and three units of fanatic spear men. A couple of guns were thrown into the mix giving the Dervishes about 23 units in play. Effectively each command had to lose three units before it was broken. The Dervish commanders were all given command scores of 8.

The Allied forces were comprised of two brigades with each force either having 3 or 4 regular infantry. two artillery pieces (including one Gardner Gun), and a cavalry unit. The force that had only three infantry battalions was augmented with the Mounted Camel Corps. Again the break point for each Allied Brigade was three. We don't count artillery towards breakpoints

The Mahdists approach the field... 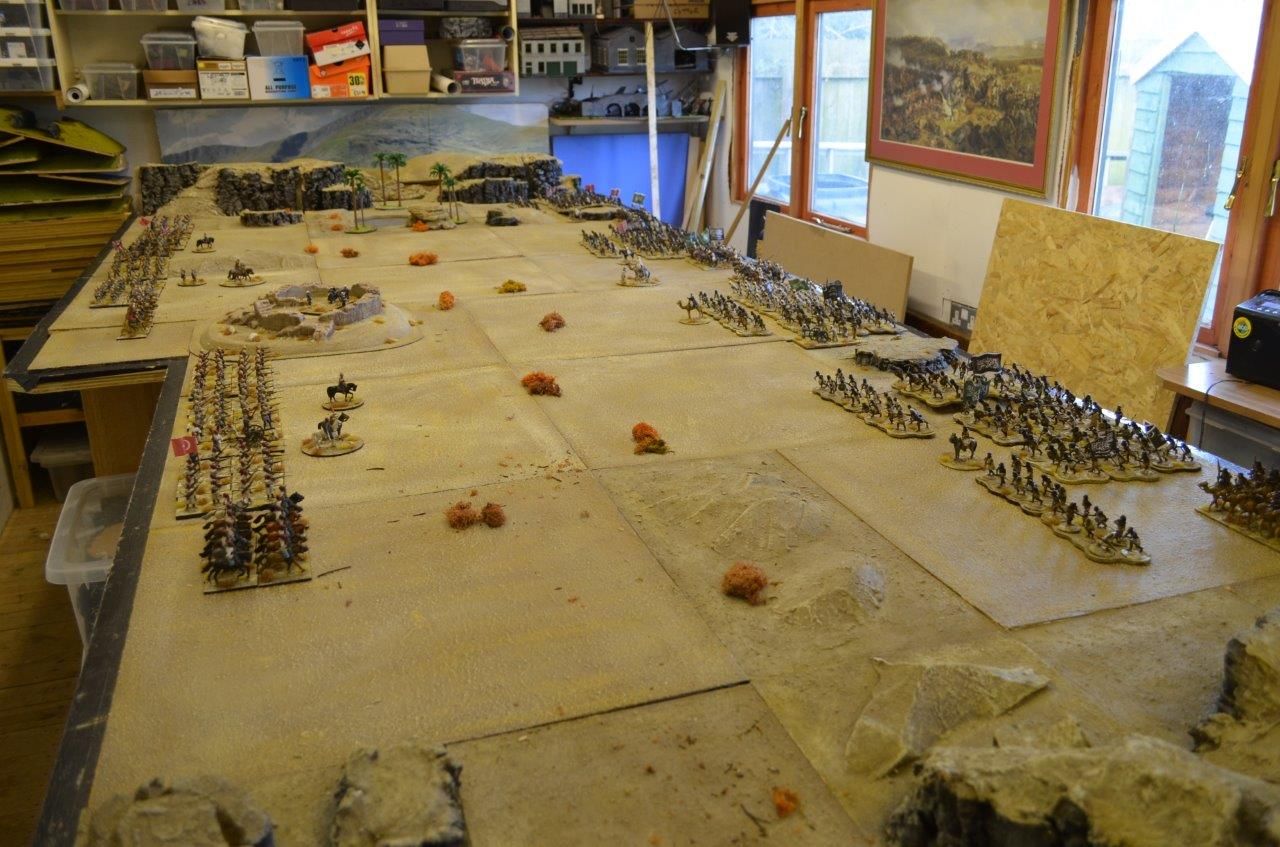 Action began on the Allied Left flank (we were waiting on Rolf to join us) with Mark pushing his forces forward using the low hills to screen his troops.

Unlike our Zulu wars games the options open to the Dervish are much more varied, their mix of skirmishers, cavalry and foot giving a number of options that are not reflected in the games set in the south african veldt.

With the Dervish rapidly advancing Alastair's British command marched forward to deliver some well timed volleys. These quickly took the steam out of the warbands advancing

By now the Mahdists decided they had had enough and charged forward - spear waving foot and cavalry pouring over the hills.

By now the right flank had come into play and the field of fire for my Gardner gun was full of rich targets. I rolled the dice and missed - I rolled again a 1 - the gun was jammed ! and effectively out of the game.

This opened the door for the Beja cavalry to charge into my Mounted Camel unit. Fortunately the dice gods favoured the defenders and the Beja were sent packing. Recognising an opportunity to press home my advantage IO commanded the Camels to advance, dismount and give fire to the fleeing horse.

I rolled a blunder. Deciding that they had done their bit the British Camel Commander retreated from the board never to be seen again.

And eventually they crashed into the British Lines

But this advance was having an impact on the Dervish morale - their left flank brigade in the Wadi of death finally broke on the bayonets of the Allied right flank.

and I was in distinct danger of the rest folding... 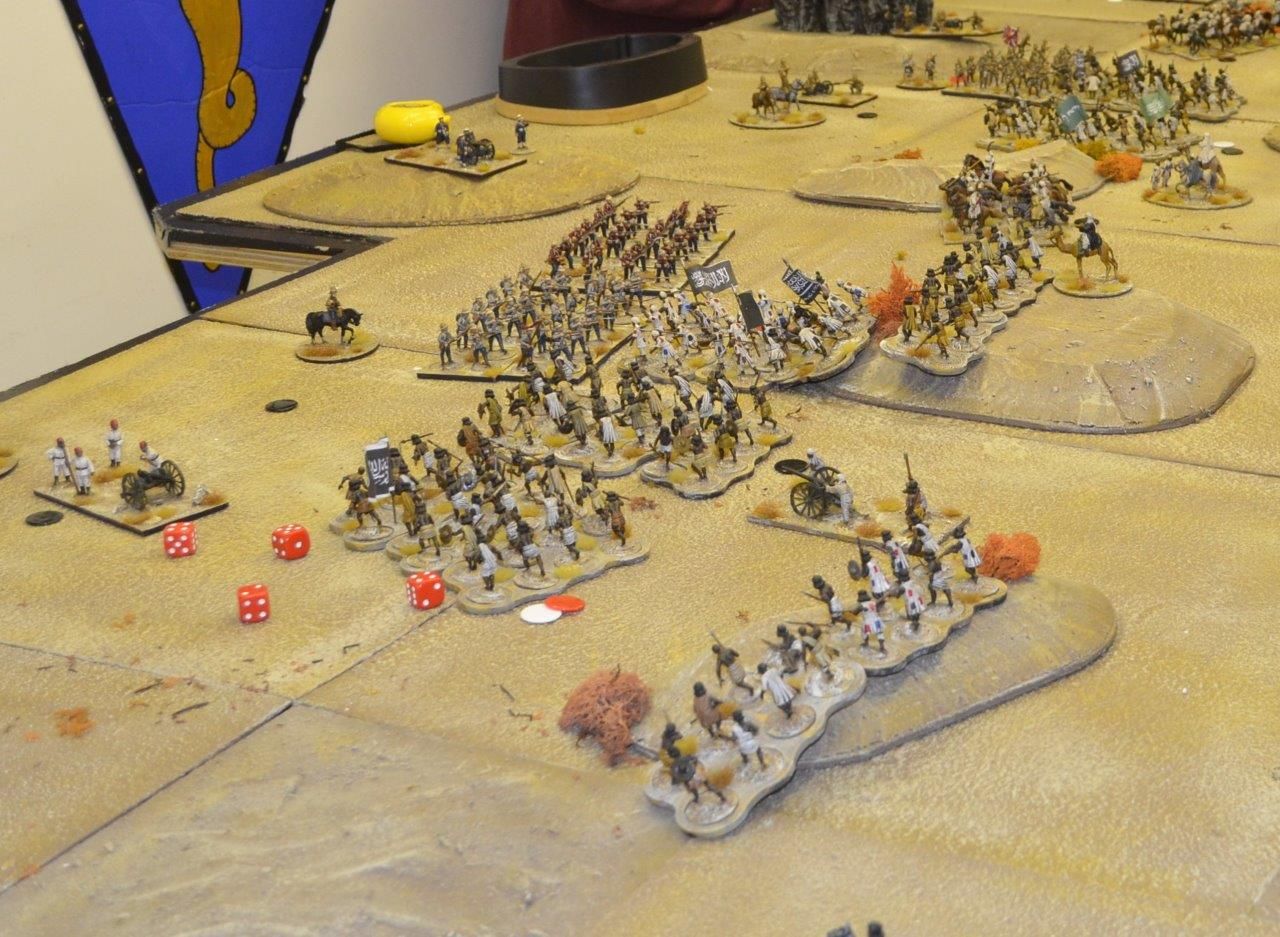 Did I mention that at this point Alastair (being a Scot) was fighting a desperate action with his Black Watch. They lost ! The first British Infantry unit to go down fighting.

By now the British had lost two units in each of their brigades - if wither lost one more that unit could not advance. The Dervishes had already committed three of their four brigades and two were now broken. This was going to be tight

In a final flurry of attacks from the Dervish fourth brigade (that had effectively been un-engaged all battle thanks to some very poor command rolls) the delivered the killing blow to the Allied intentions - just. Both Allied brigades were broken and three of the four Dervishes.

Units across the table were shattered and virtually every unit had suffered casualties.

This was a telling victory for the Mahdi.

The battle using Black Powder and these forces was fought in two hours and was a pretty tight affair. Both sides had a modicum of both good and bad luck with some crazy die rolls at crucial poinbts in the game. These results may well have changed events if different but it was agreed that the game was not only balanced but also great fun and a great intro into this period.

Personally I was delighted with the overall impact of the game and by guests all thought that it looked great.

As part of my reading into this period I purchased Mike Snook's - Go Strong into the Desert. This book can be found onsale via the Perry Website and is worth every penny as an intro into this period. Interestingly it has all the orders of battle for virtually every engagement in the various Sudan campaign. A quick study of these reveals that the the vast majority of battles saw the Mahdist either outnumbered or at best equal in size to the British expeditionary forces. So our engagement with a numerically stringer Mahdi force was very unlikely but where is the fun in having a game and knowing the result before you have even started.

part 15 can be found here