"Major Hogan, please tell Mister Sharpe what he can do for us next" instructed the Commander of his Britannic Majesties Army in the Peninsular

The portly exploratory officer turned to the tall green clad man in front of him. Both men carried no signals of rank but the very fact that they were standing in the Generals office clearly stood then in high regard.

"Richard my dear boy" opened Hogan "your successful attempts to retrieve the orders of battle from Marshal Soult has given us valuable insight into the Frenchman's plans and for that we are extremely grateful. However these plans have revealed an option to the French we had not considered. There is a bridge not far from Rosalejo that could prove a vantage to their forces in the their approach to our defences.

Tonight you and your chosen men will go to this bridge and blow it up!"

Sharpe looked at Hogan "is the bridge guarded sir?"

"As far as we know there is a small sentry detail but nothing you and your men can't resolve with a bit of daring do" responded the exploring officer " oh...and Richarde whilst you are out on your troubles watch out for certain French Agent - Monsieur Ducos. A rather nasty piece of work that seems to be one of the Emperors favourites down here in Spain..."

As the intro explains Sharpe and his chosen men have been tasked with blowing up a certain bridge near the village of Rosalejo.

The table 4 x 4 has been set up using my desert boards to create the canyon - this river runs through this with of course the target bridge. A simple track bisects the landscape.

Not surprisingly the bridge is guarded by 5 regular French Soldiers and is being inspected by Monsiour Ducos.

Monsieur Ducos is also an extraordinary chap so he gets some talents and rolls a d12. Furthermore he is armed with two pistols. Sadly my figure does not look like the TV character (yet) 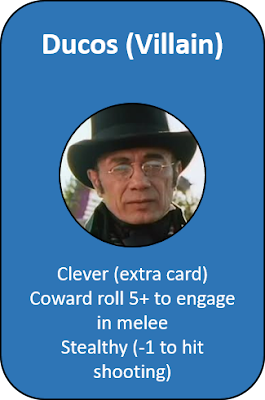 The French will be reinforced during the game with three foot troops and three mounted dragoons. We diced at the beginning of the game and these would arrive turn 6.

The Cart (driven by a local peasant - a legitimate target for the French) would enter the board and be driven onto the bridge. The cart's contents would then be ignited by fuse and subsequently blown up. The fuse would take 0-5 turns to fire its contents (during which time the cart could be moved/or the fuse extinguished) The cart can be shot at (+2 to hit) and any hit has a 1/10 chance to ignite the contents. Anyone or thing within 6" of the exploding cart is toast.

Mark would play the French, Alastair the Greenjackets and I was coordinating, being the umpire, making it up as I went along and making the tea.

So as the evening was setting the French sentries were feeling quite relaxed and relieved they had had a quiet day....

All of a sudden they could here the incessant squeak of a badly oiled cart trundling up the valley towards the bridge...Merde they cried dismayed that their light supper of mussels and frogs legs was about to be delayed

Under the guidance of Monsieur Ducos (why he was in the valley nobody knows) the French soldiers quickly took up their positions.

The riflemen quickly scattered and started to take advantage of their longer range rifles - the first Frenchmen (a native of Normandy we decided) were dropped quite quickly. Daniel Hagman bagging his first of many kills on that warm evening

Realising their predicament was quite bad Ducos instructed one of his troops to hide behind the small Shrine next to the bridge - didn't do him much good as he caught a lead bullet in his head a couple of turns later.

By now Sharpe and Harper had moved forward and were closing on the bridge - Sharpe had already run through one poor french soldier with his heavy blade and Harper's seven barreled monstrosity had yet to be fired in anger.

Harper was poised to take the bridge (sorry no pics as Camera was forgotten) - Ducos put on a stiff lip and charged forward firing hone of his flintlocks into Harper's general direction.This moment of sheer french insanity was enough for Harper to fumble in the ensuing combat. The French spies bullet hit the Irishmen's thick skull and Harper for the second time in as many weeks hit the dirt out cold.

Realising that his soon to be arch enemy Richard Sharpe was just round the corner Ducos grabbed the initiative in the next turn and managed to charge Sharpe (so much for his cowardly trait) - A bitter struggle erupted and Sharpe was driven back wounded by the sneaky Parisian....

Was Sharpe to be denied his victory...NO ! Alastair played an Ace using this a Queen to not only shake off his wound but also allow him to lunge back at Ducos. With a savage glint in his eye Sharpe thrust his heavy cavalry blade into the bemused Frenchman. Sharpe has dismissed his foe

With the majority of the French sentries out the way Giuseppe the cart driver moved forward. Sadly this was his last action as a rather sneaky Frenchman ran up and ran him through with a bayonet.

With the original french sentries down and out it was a good job their reinforcements arrived - and it wasn't long until the dragoon were thundering over the bridge.

The cart was slowly heading towards it destination

The first dragoon swung left off the bridge and charged Sharpe - bad move. Sharpe grabbed the horses bridle and pulled the froggie off his horse. A quick flick of his wrist (in a thuggish kind of way) sent another French trooper off on his final journey

Harris didn't fare quite so well as he he received a new haircut from the sabre swinging Dragoon charging him. fortunately Cooper was on hand to rescue him and take over the cart driving duties. Hagman shot the second dragoon from very long range.

Filled with Blood lust Sharpe charged down the third mounted Frenchman and once again his prowess with a sword was pretty impressive...

I can assure all the readers here that this was how the game was playing out...

By now Cooper had got the cart onto the bridge BUT he had been overcome by the final French guards. These guys realising the cart contained enough explosives to send the bridge into orbit knew it had to be moved.

The only man who could physically stop[ this from happening was our hero Richard Sharpe - he bounded onto the bridge to confront the carts new owners. He swung his blade ....and missed. The Frenchman stabbed him with his bayonet - potentially a lethal wound. We will never know (at least not until the next adventure) as Sharpe fell from the bridge into the icy water.

The French guards quickly drive the cart off the bridge and back towards their lines - both Hagman and Perkins hit the cart but their rifle fire was insufficient to stop the cart and its contents reaching French lines.

Sharpe has failed - what will happen next...

Postscript. This was such a fun game to umpire - all credit to my players for playing the characters.

The story played out so well and could have easily swung the other way...