If you are into 28mm Future Wars/Post Apocalyptic scenarios this might be of interest. For some time now I have been adding various terrain elements to my bombed out city. What better than add a few wrecked cars.

Todays poundstores, 99p outlets and major supermarkets sell a range of cheap diecast cars that just about ‘scale’ up to 28mm. Better still is the car boot sale where a multitude of vehicles can be bought. Word of warning – sellers at carboot sales tend to think that a 47 year old rummaging through the used car bins is an expert and as such always want premium price – better to let your kids dig out what they think is right and you step in with the pocket money !

So you now have the cars....first job is to separate the body from the chassis. In most cases this is very straightforward with a couple of screws to remove. Put the chassis in your bits and bob box – we are going to use those later.

The body of the car should be just a metal shell. If necessary tap out the plastic glass. Then spray the vehicle in an even matt coat. 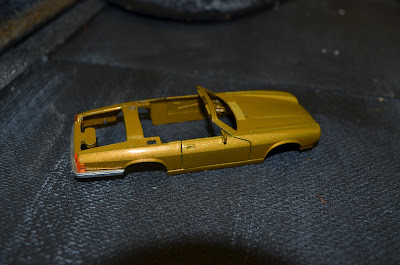 Personally I like to mount my car bodies on a base with other accumulated detritus. I typically tend to make up a rubble mix of blue foam, cat litter, grit and sand. Stick the body and rubble on the base (hard as nails a good option). Once dry liberally cover in black acrylic paint.

The rubble is then dry brushed in greys and browns and the car body dry brushed in a suitable metallic colour – I used tin GW bitz and boltgun metal. Once dry wash the car body in ink – nut brown is my favoured choice. This gives a better metallic sheen – my preference. 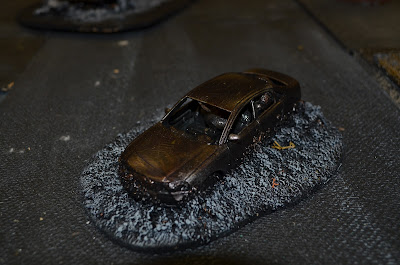 Let’s go back to those chassis you put away. Well these can be the basis of ‘new vehicles’. If you make enough wrecks you’re going to have several components that can be mixed and matched. Most of the car interiors can be reused for steering wheels, dashboard and driver seats. By mixing up the wheels on big and large cars you can create some dune buggy style cars. The judicious use of plastic bits, plastic-card, grating, sprues and the odd fuel barrel all help to create the effect. 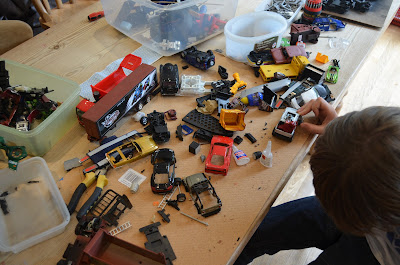 My son (12 years old) and I have had great fun making these as we can let our imagination run riot. 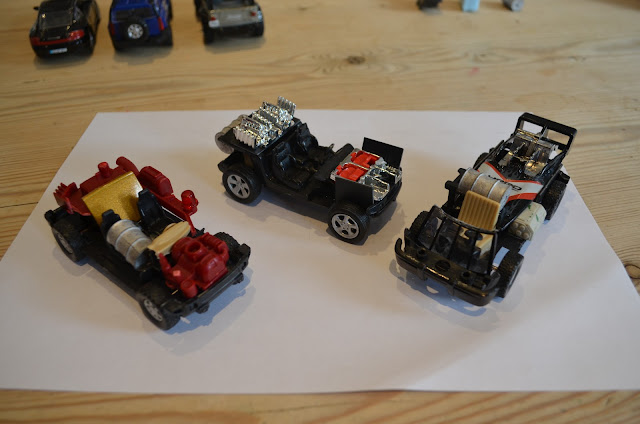 The first three cars roll off the production line. 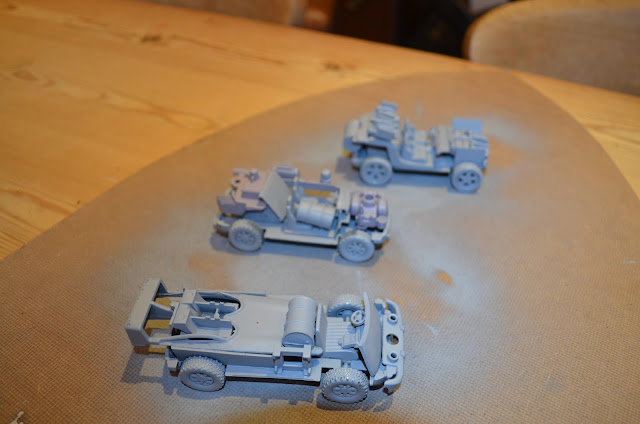 into the paint shop for the first coat of primer. I quickly realised that black would be better - hence the following images. All the figures are 28mm.

We built a total of 11 cars.. just ready for painting. 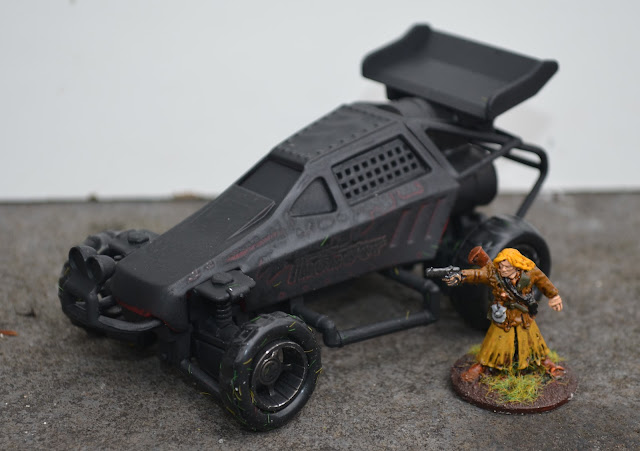 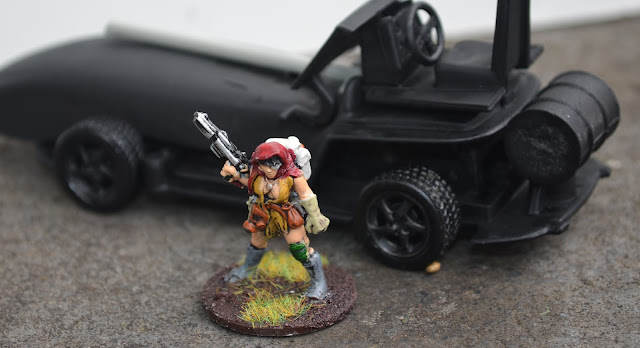 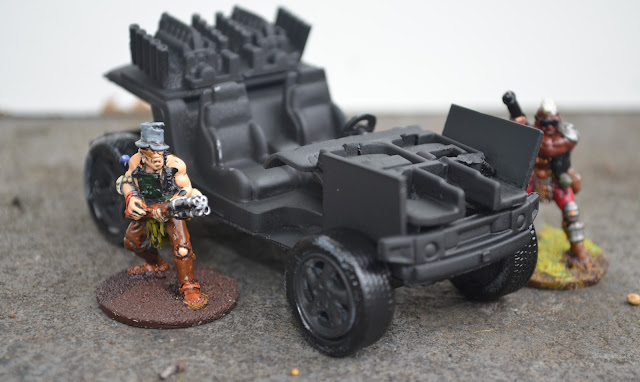 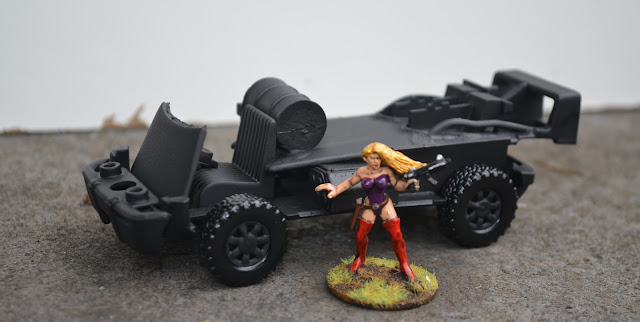 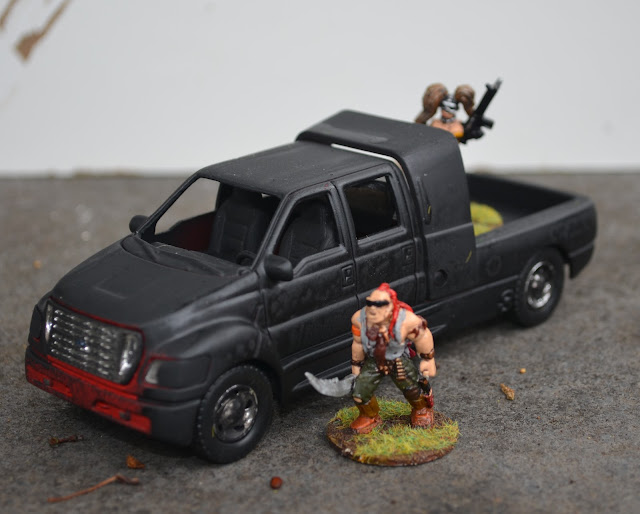 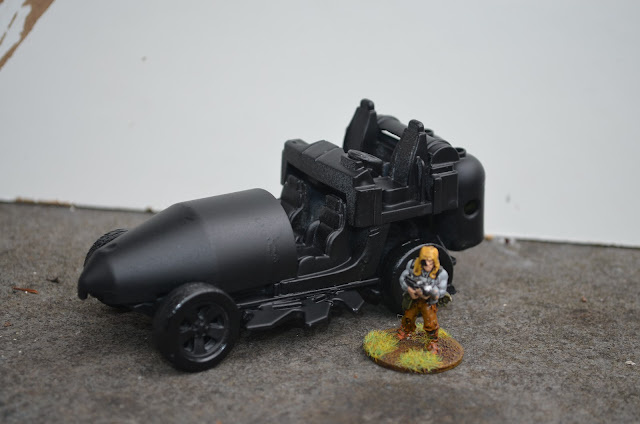 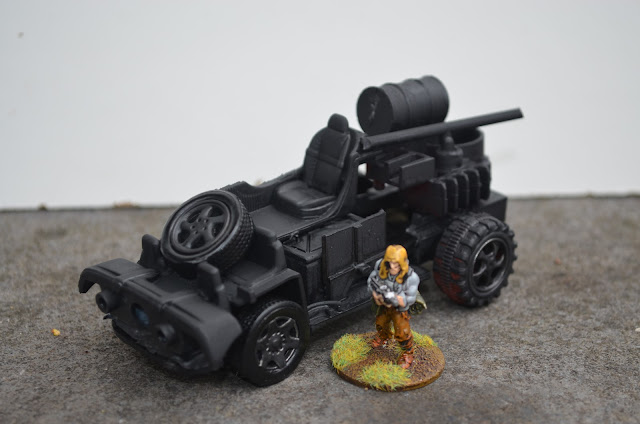 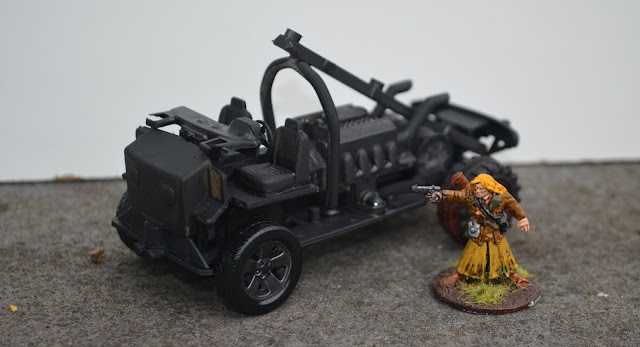 Come back in a few days time to see the finished articles...which can be found here