Last Wednesday I convened another Black Powder Napoleonic Game. This scenario was set late in the War with the beleaguered French defending a small village in the south of France.
The scenario was specifically designed for three players. With two Allied players and one French.
The French player had to defend and hold the village for 12 turns. If at the end of the 12th turn it was still in French hands he could claim victory. Rather than playing with battalion strength forces I decided this would be a small company affair with each unit representing a company or squadron of cavalry 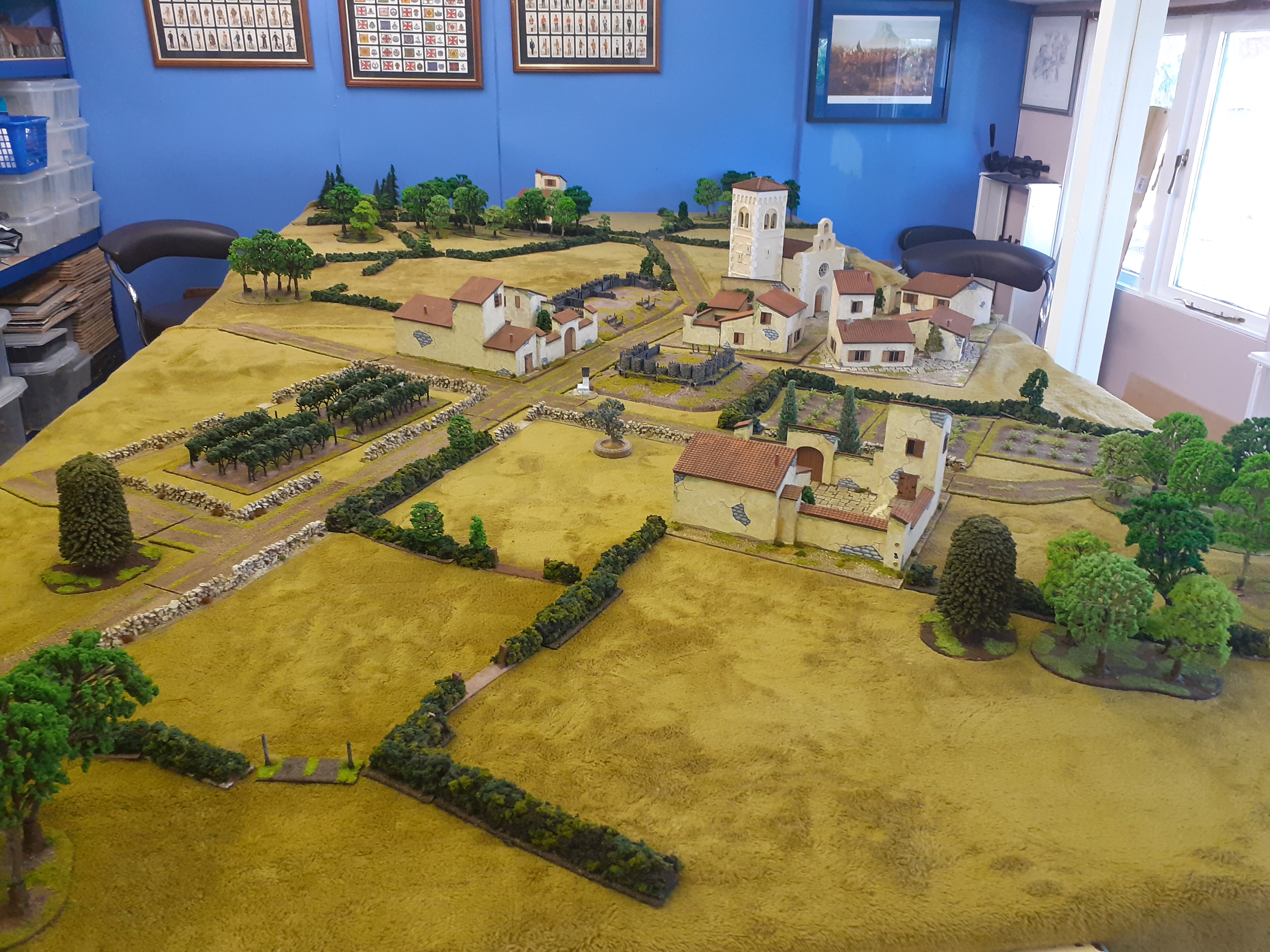 The table can be seen above - complete with fortified farmhouses & redoubts
The French Player had at his disposal.
2 squadrons of Dragoons (cavalry)
1 company of Guard (please dont ask why they were there)
1 company of swiss regulars
2 foot artillery guns (emplaced with no limbers)
1 undersized infantry battalion consisting of
1 company of Elite (4+) Grenadiers
1 company of Elite (4+) Voltiguers
3 companys's of raw conscript fusileers (everytime they take a hit they must take a break test)
The French player had cards to denote all tyhese forces along with 4 blanks - these were placed down on the table in advance of the Allied deployment. Until these units fired., moved or were seen (24" distance) they remained off table. 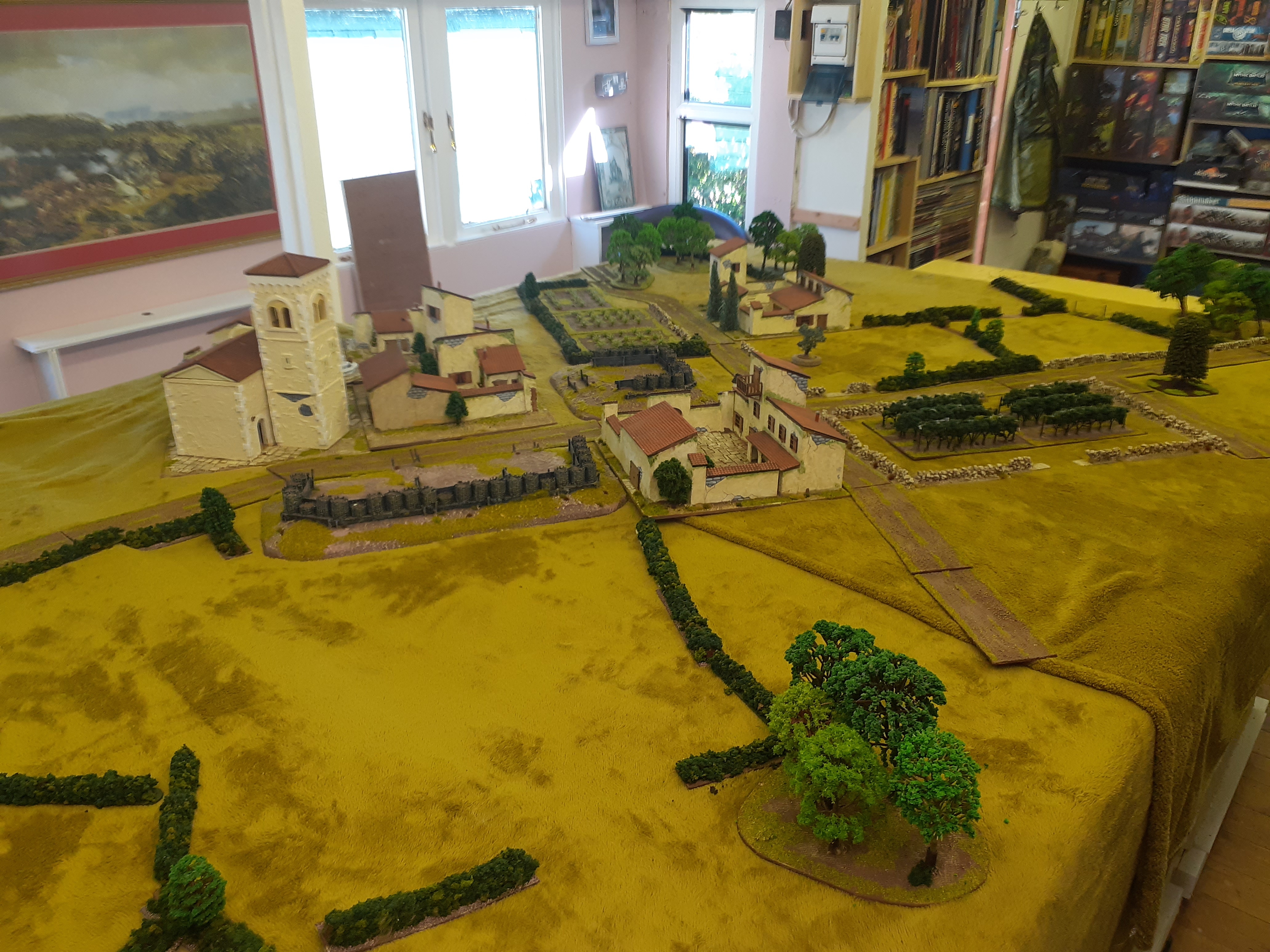 View of the table from North West -Allied troops could enter from far end and along the edge on the left
The French player could deploy these anywhere on the table.
The hedges would restrict movement but offer soft cover. The Vineyards and planted fields were denoted as hard going. Each building area could hold one company only. 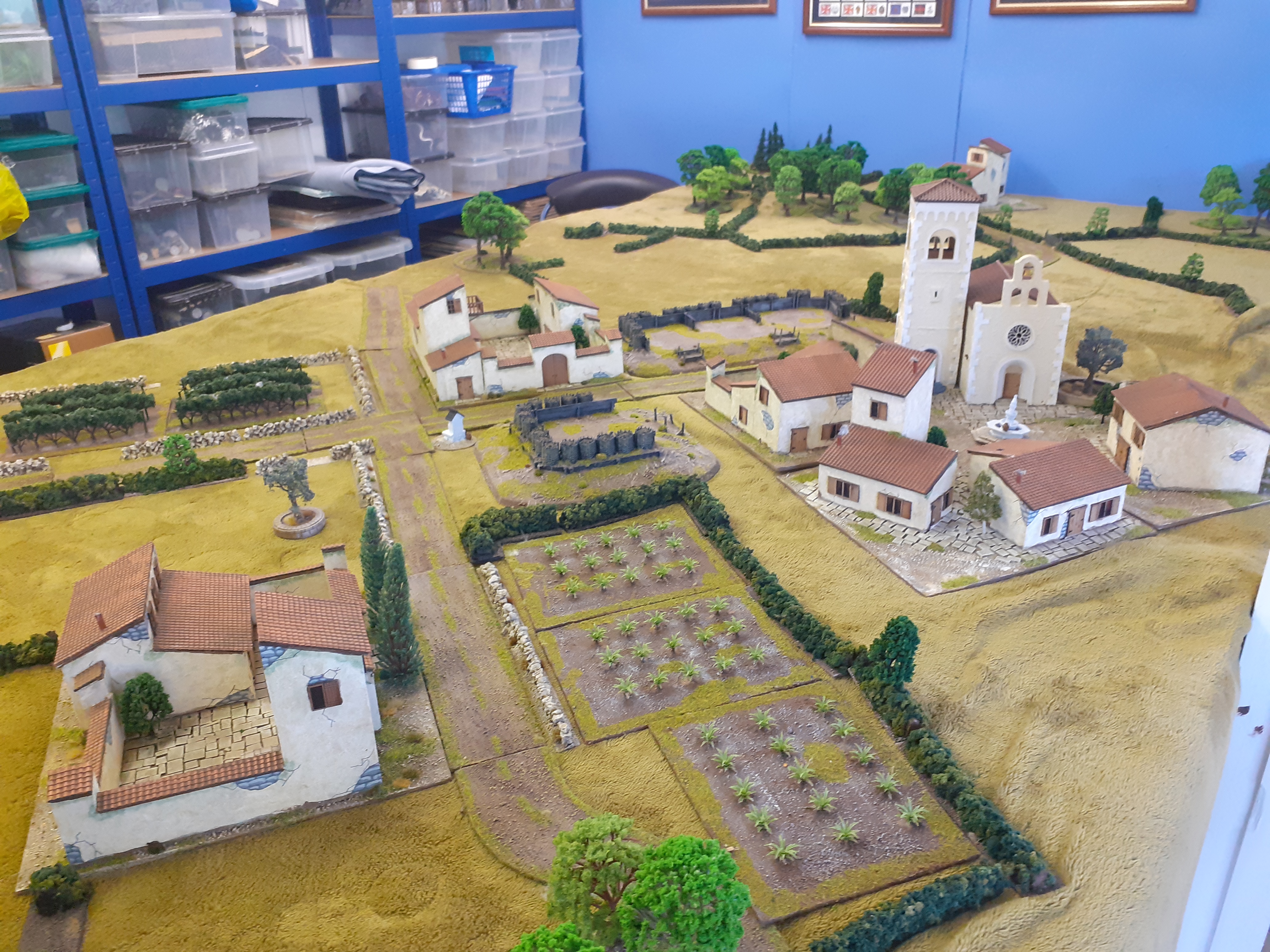 Below is a view from the far French right 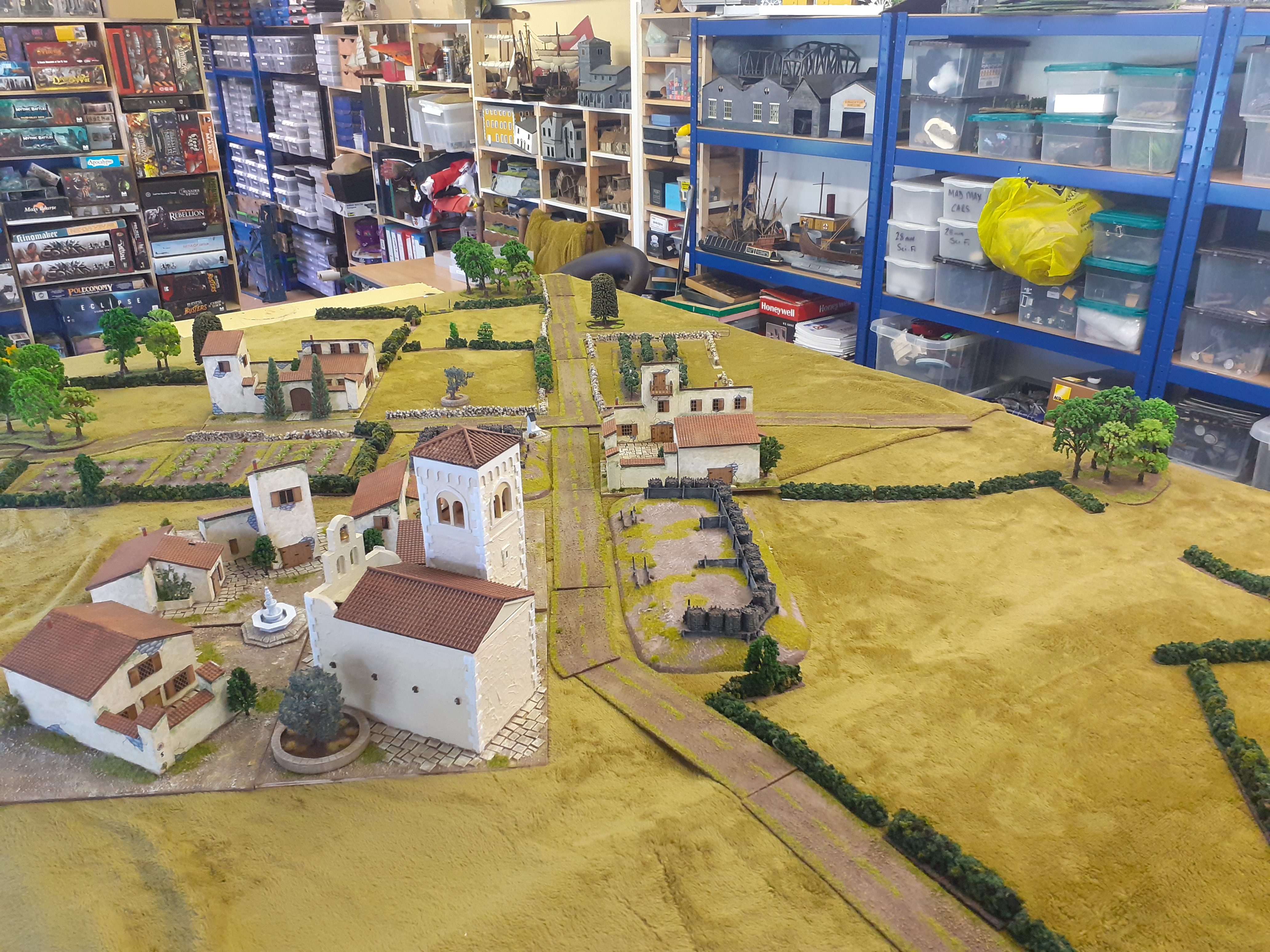 The Allied players had significantly more forces at their disposal
2 squadrons of light dragoons ()elite) plus horse battery
2 squadrons of hussars plus horse battery
1 battalion of portuguese regulars consisting of
4 companies of regular infantry
1 company of cacadores
1 foot battery
1 battalion of British Line consisting of
4 companies of infantry
1 foot battery
PLUS
2 large companies of highlanders (tough fighters)
1 company of the 95th rifles
The above could be added to any of the units
Allied forces outnumbered the French by about 2-1
With the table set and forces mustered, we rolled dice for the forces. I ended up with the French defenders. Fearing that my lines might be overrun too quickly I elected to put my best infantry in the forward positions, the artillery in the redoubts and my solitary guard unit out on the far right.
Glen and Alastair divided up the Allied forces with Alastair taking the Portuguese, bolstered by the 96th and Glen taking all the redcoats. The cavalry was split evenly.
Glen elected to come on from the Short edge and the Portuguese would assault the centre. No erffortt was made to attack from their left flank.
The Portuguese advance 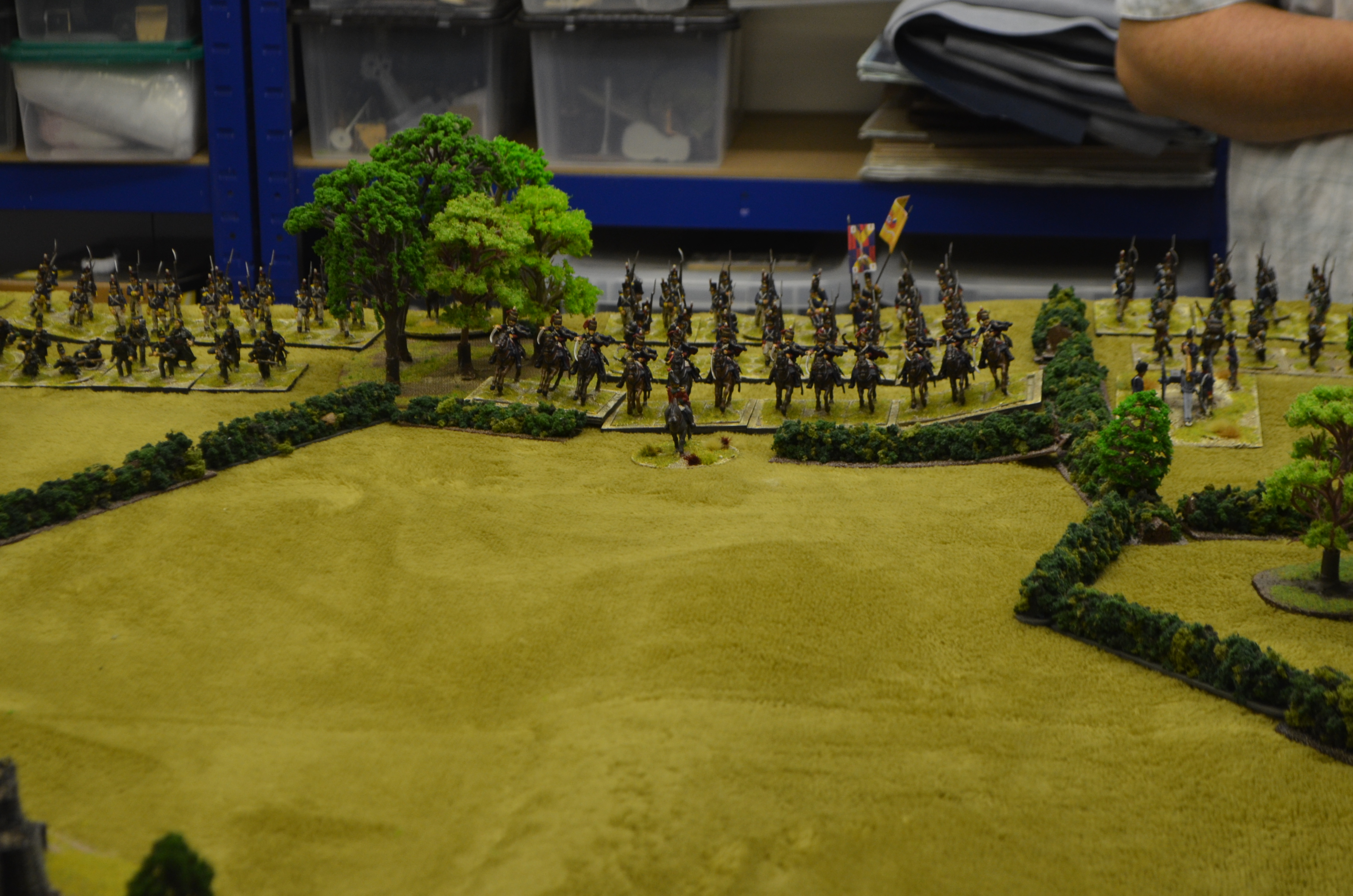 The British troops quickly moved towards the first farmhouse to discover it was being defended by veteran grenadiers. Musketry was exchanged. 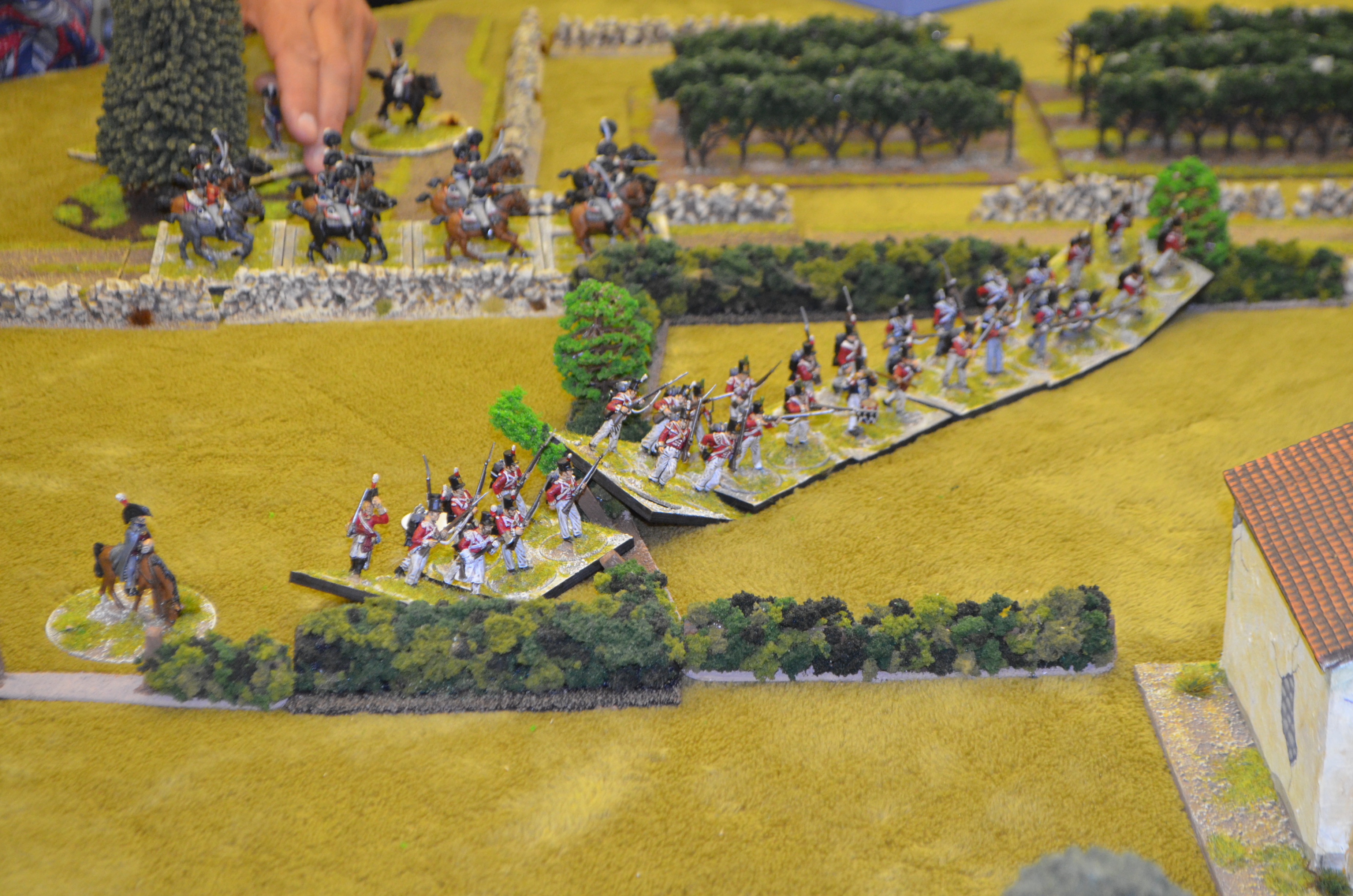 The Grenadiers were coming uder sustained fire but the walls kept casualties low. 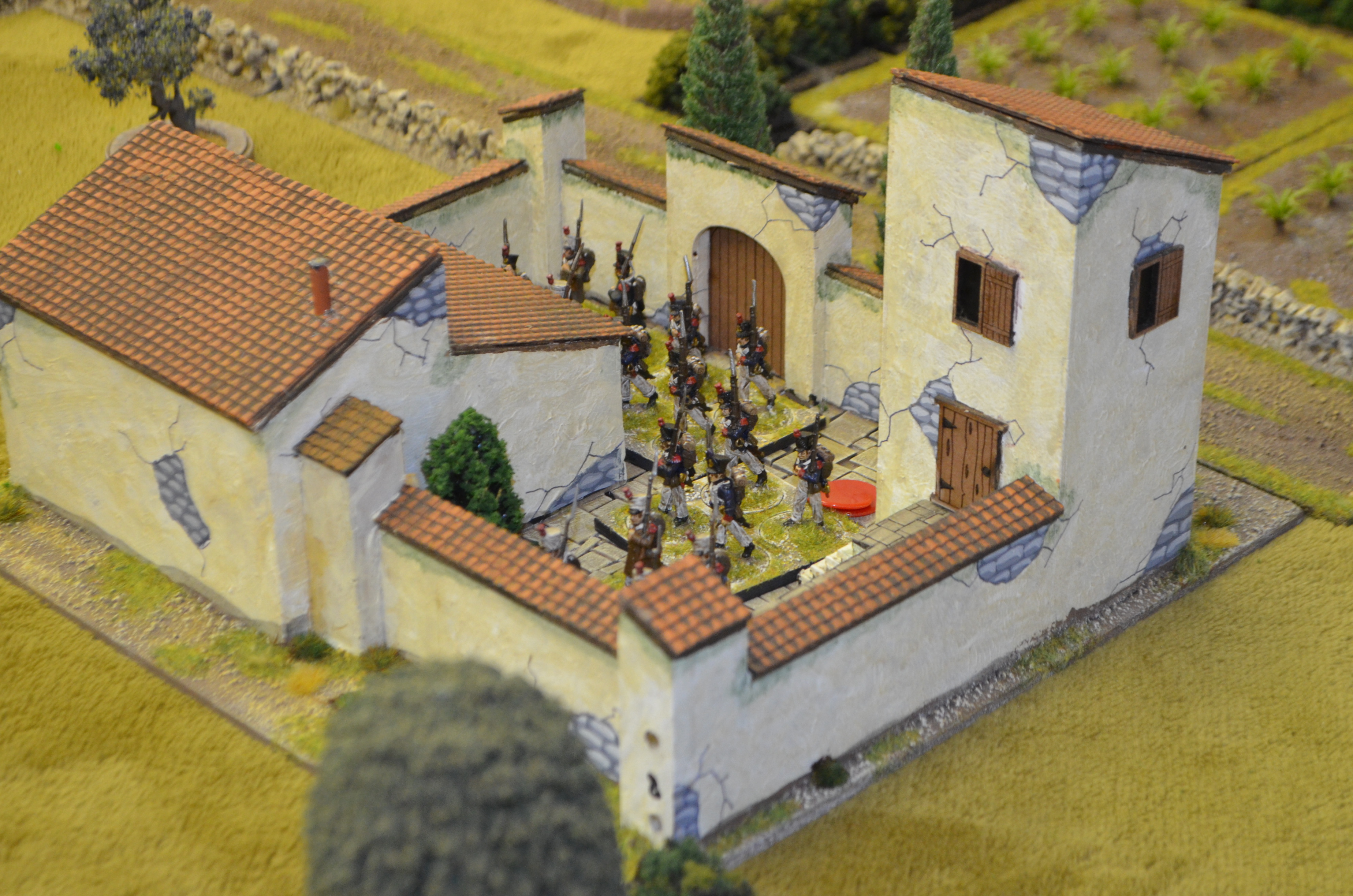 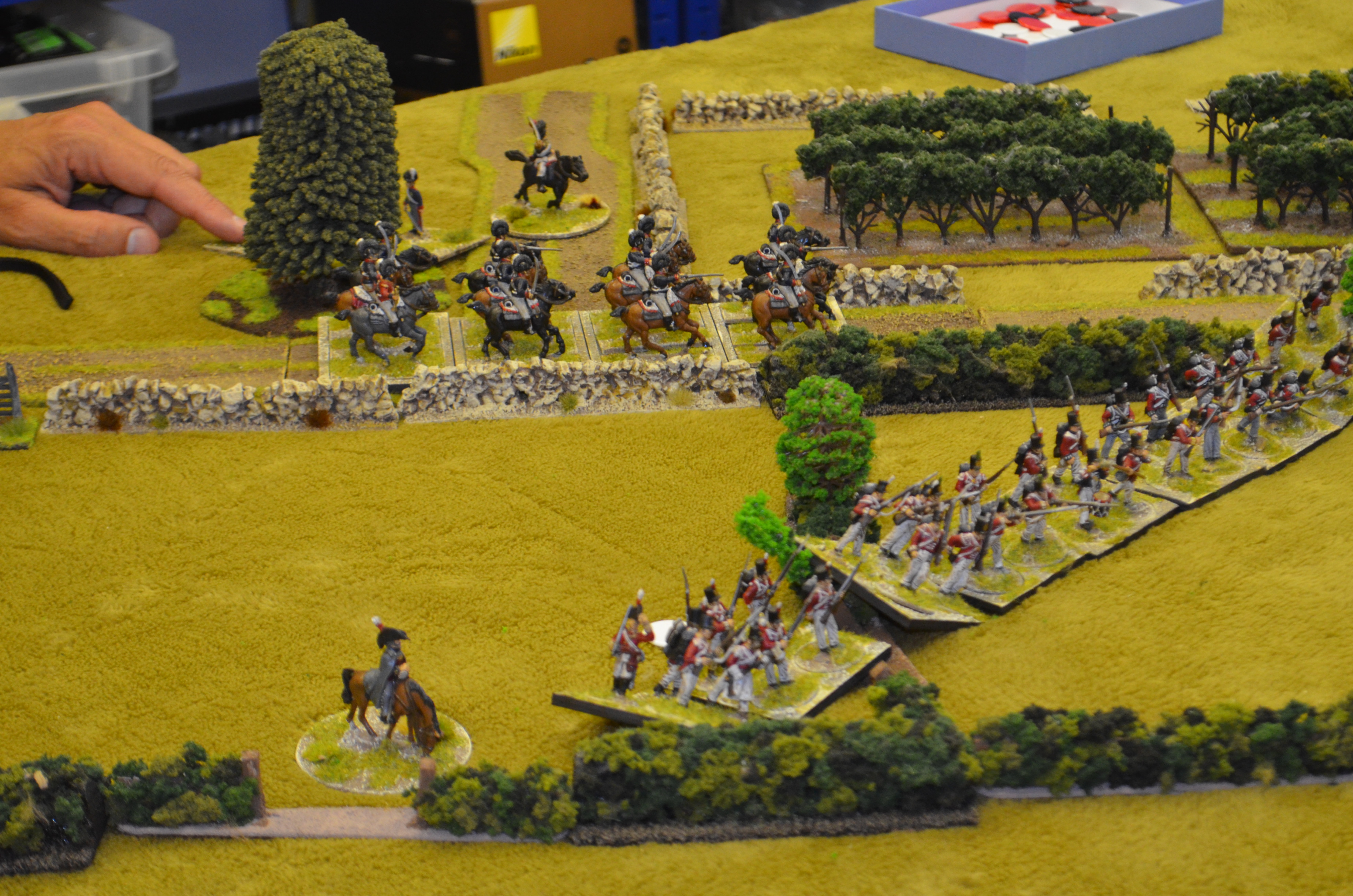 By now the Allies could see the defenders with the french guns beginning to pound the Allied lines. 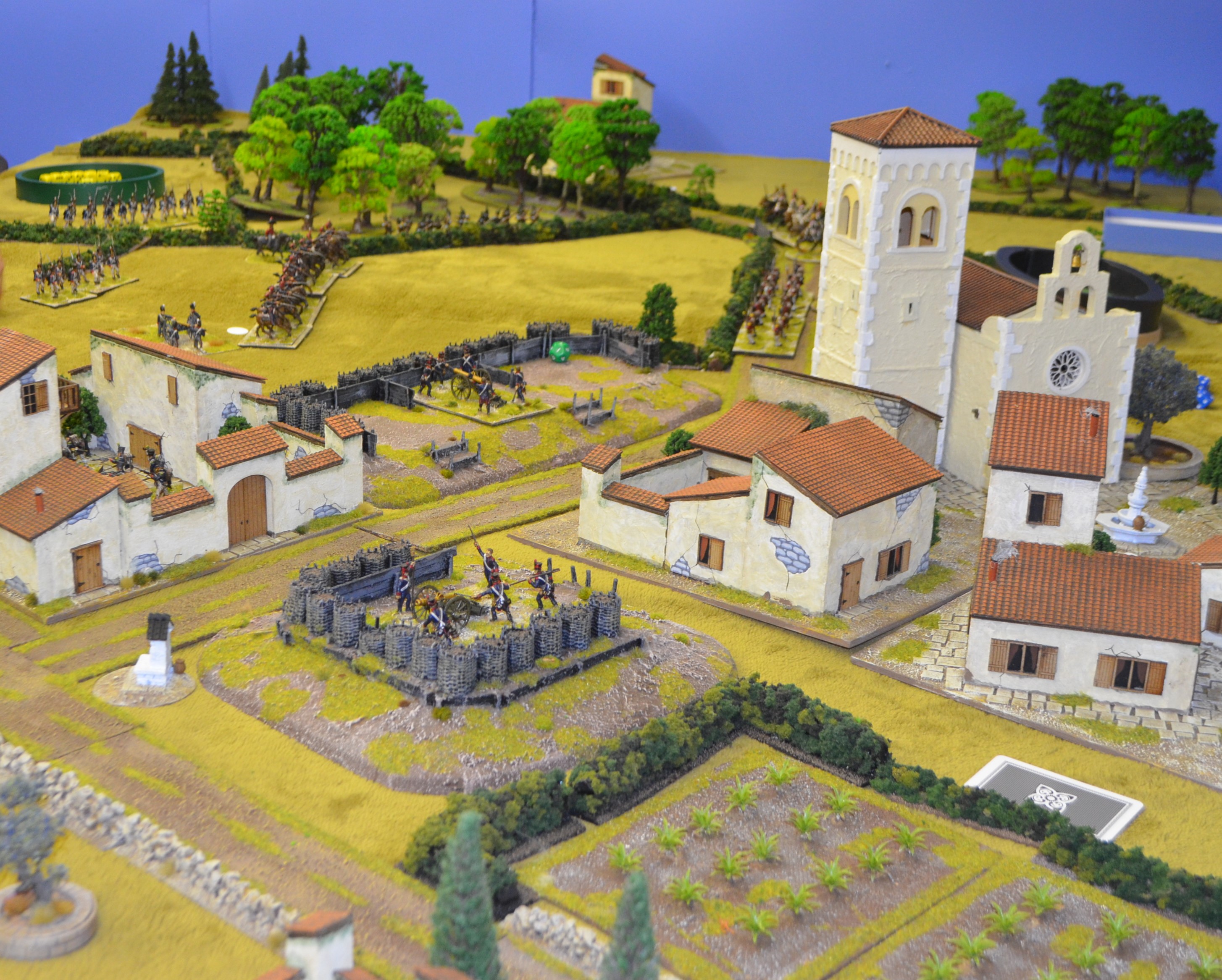 Using his cavalry as a screen Alastair pushed forward his Portuguese line troops, his skirmish Cacadores taking up position in the woods and playing havoc with the French cavalry 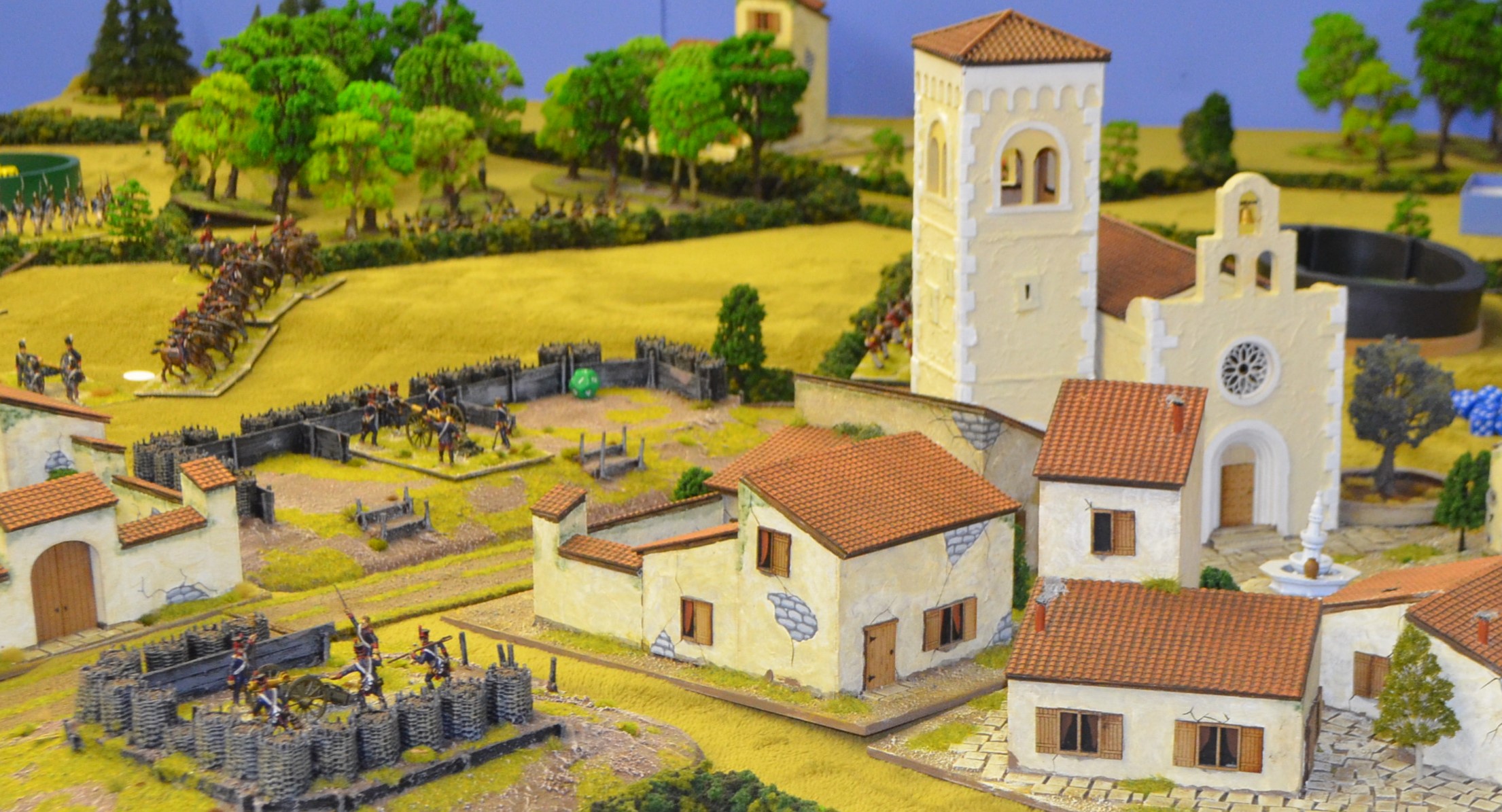 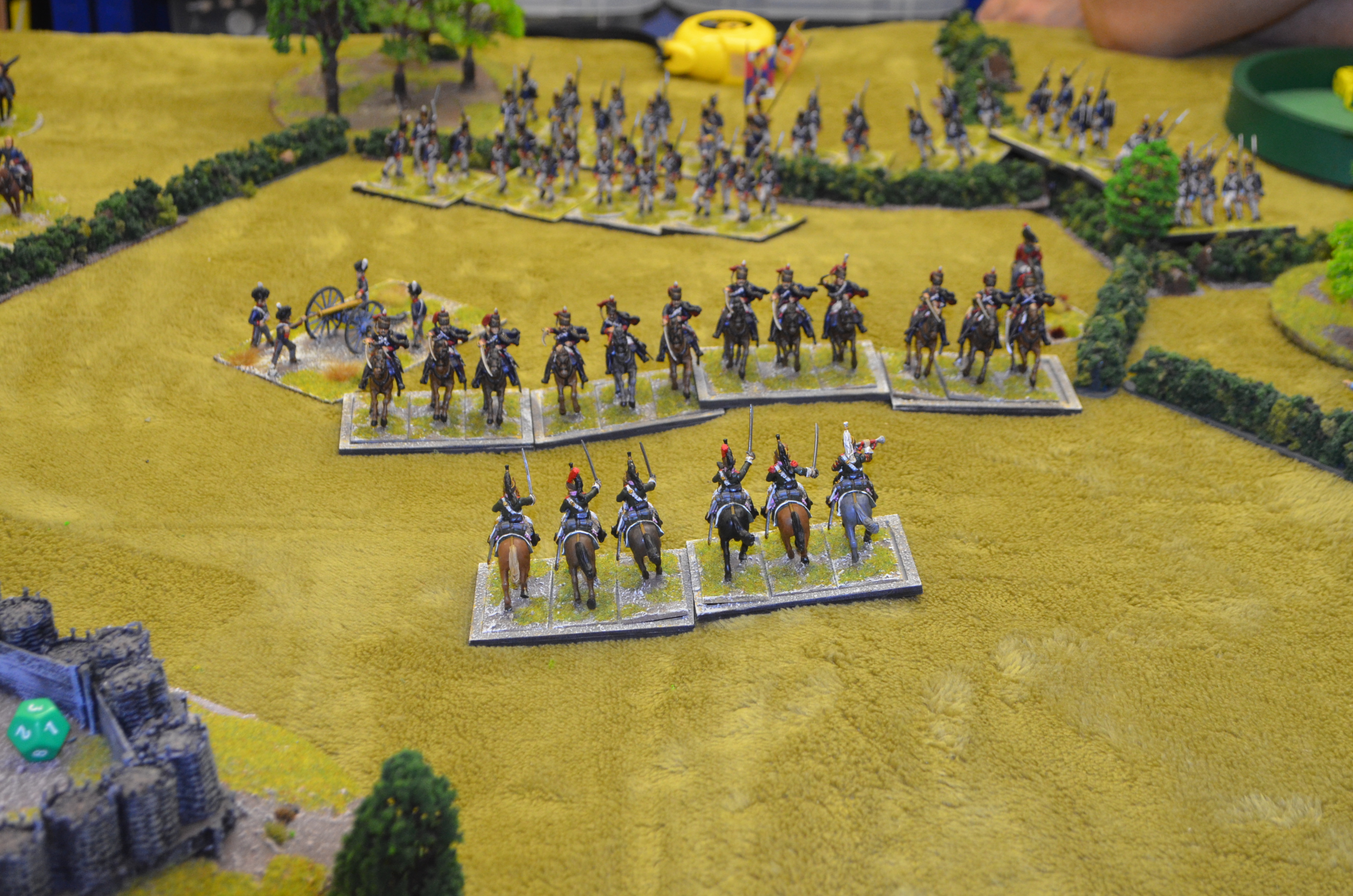 Seeing that the French cavalry was deployed Glen charged his cavalry up the town road to threaten the redoubts rear. Things were getting tight. 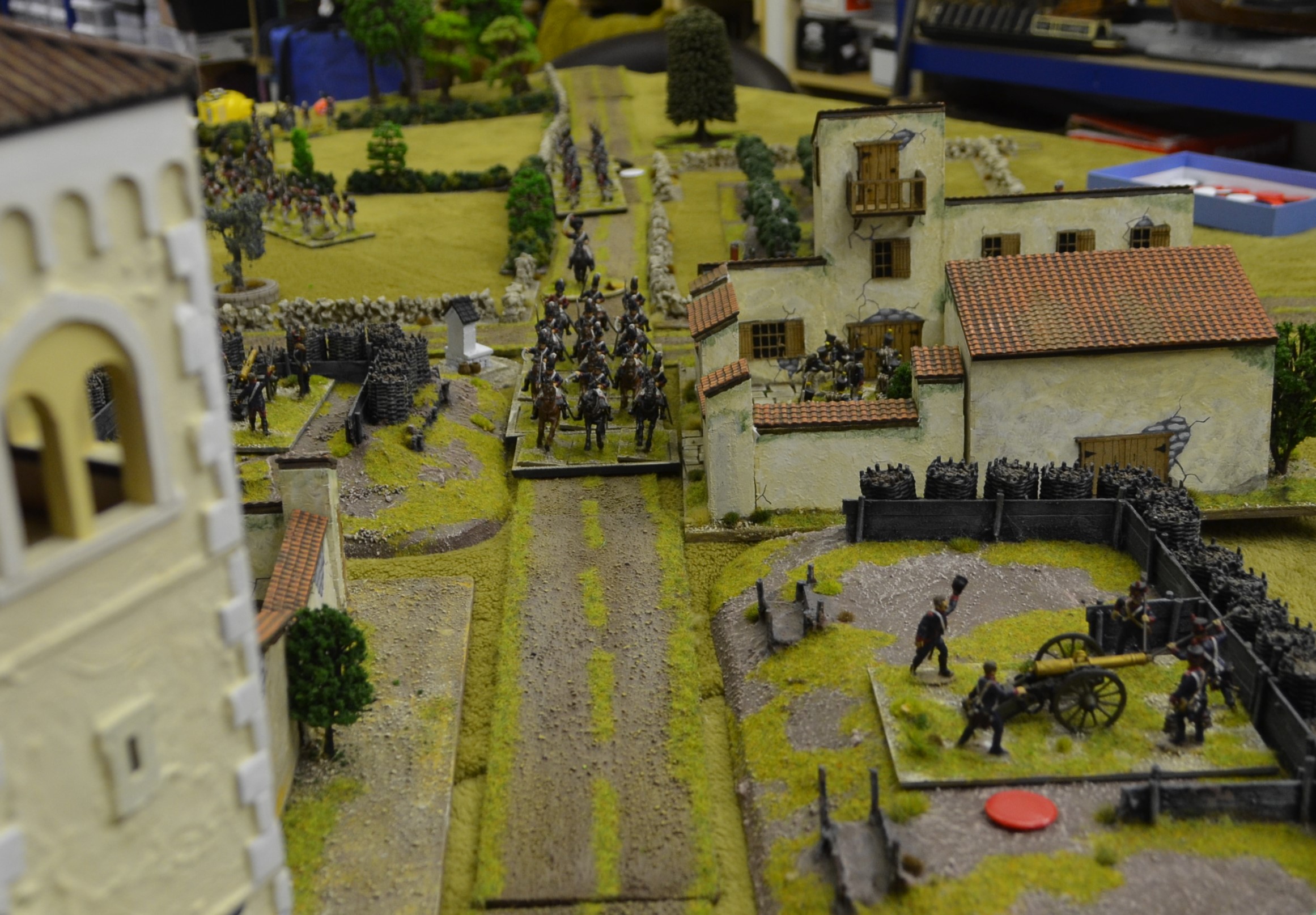 The cavalry fight in the centre was won convincingly by the British hussars, with the French driven off 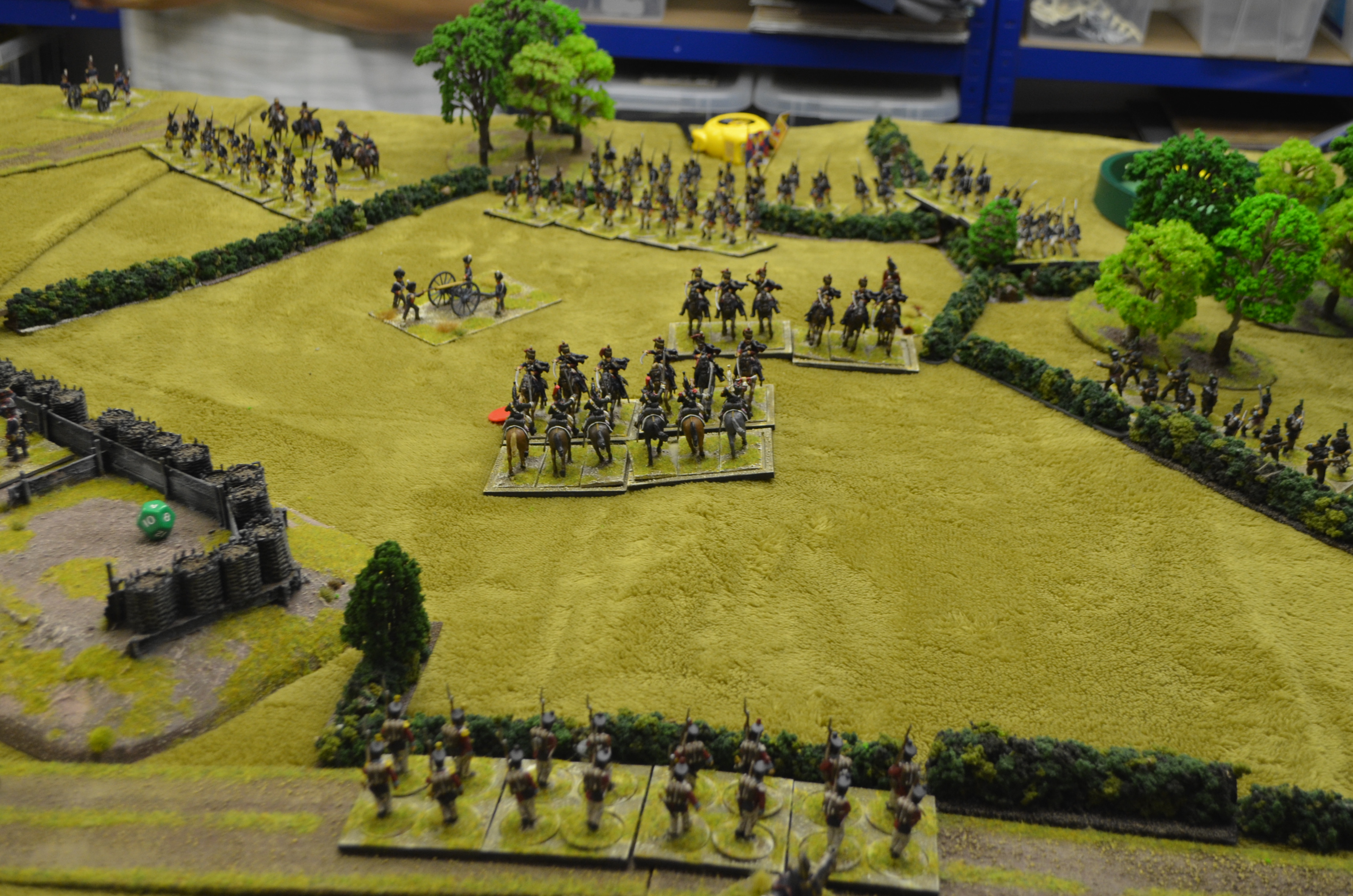 By now the French Grenadiers were fighting hand to hand with the redcoats. They held on for three turns before their luck ran out 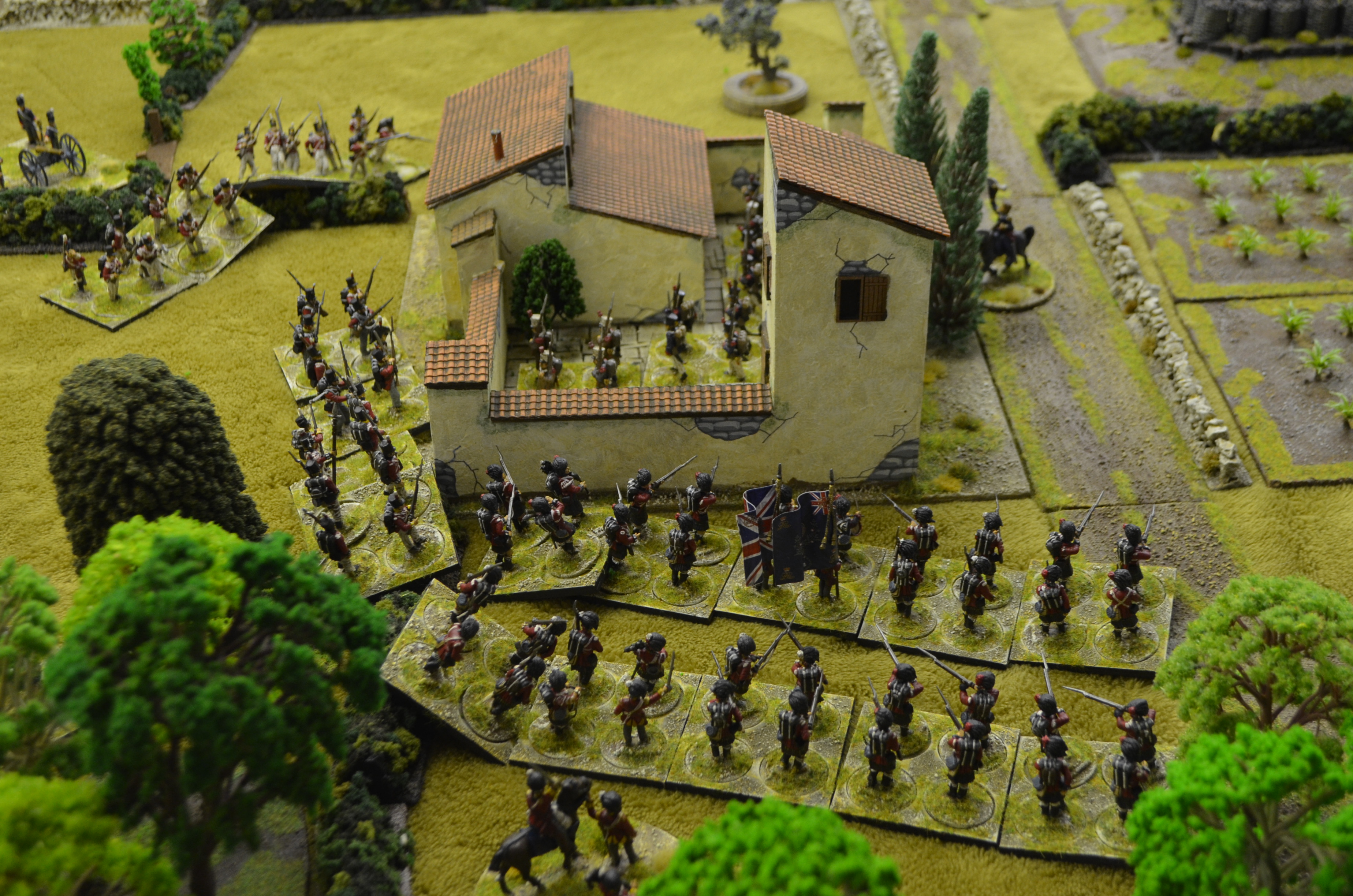 All the forces were bow deployed. My french Guard were beginning to attack the far flank of the Portuguese in the woods and the redoubt had been bolstered by the Swiss company. 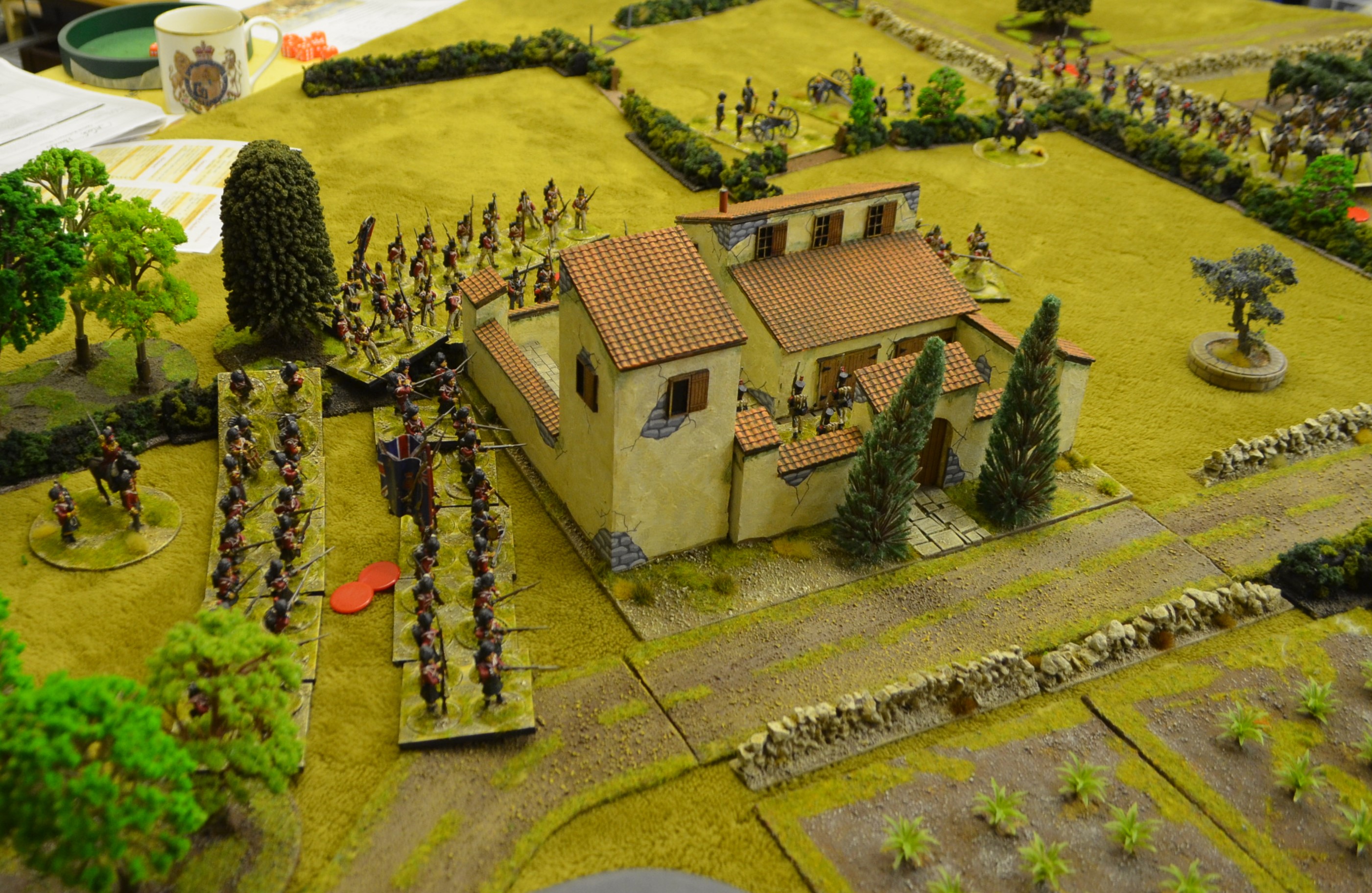 With the clock ticking - the Allies finally cleared the second farmhouse and could now assault the battery. 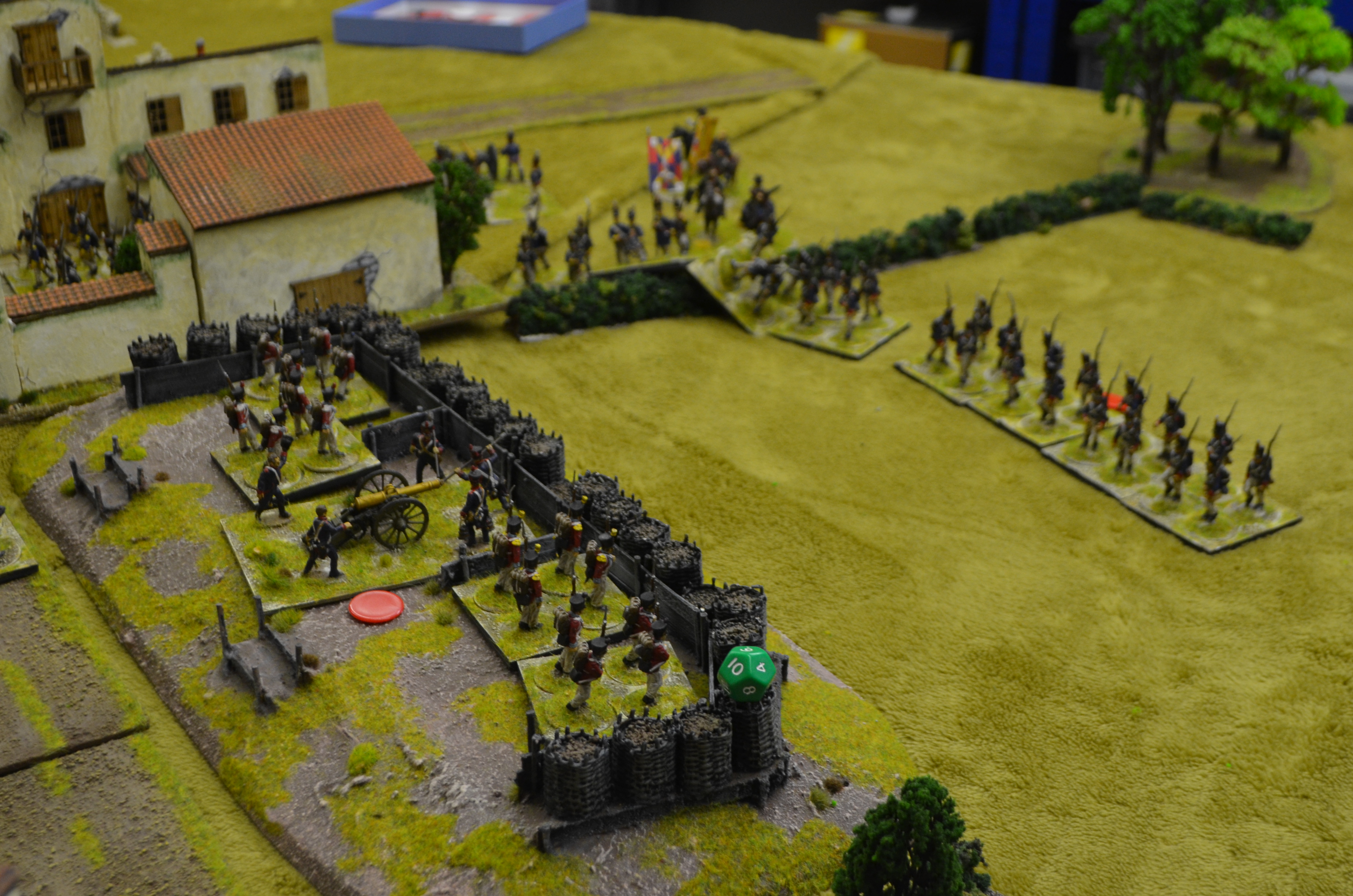 The charge was made and....with heroic cheers the Portuguese charged forward. Only to get slaughtered by the musketry of the swiss and field artillery 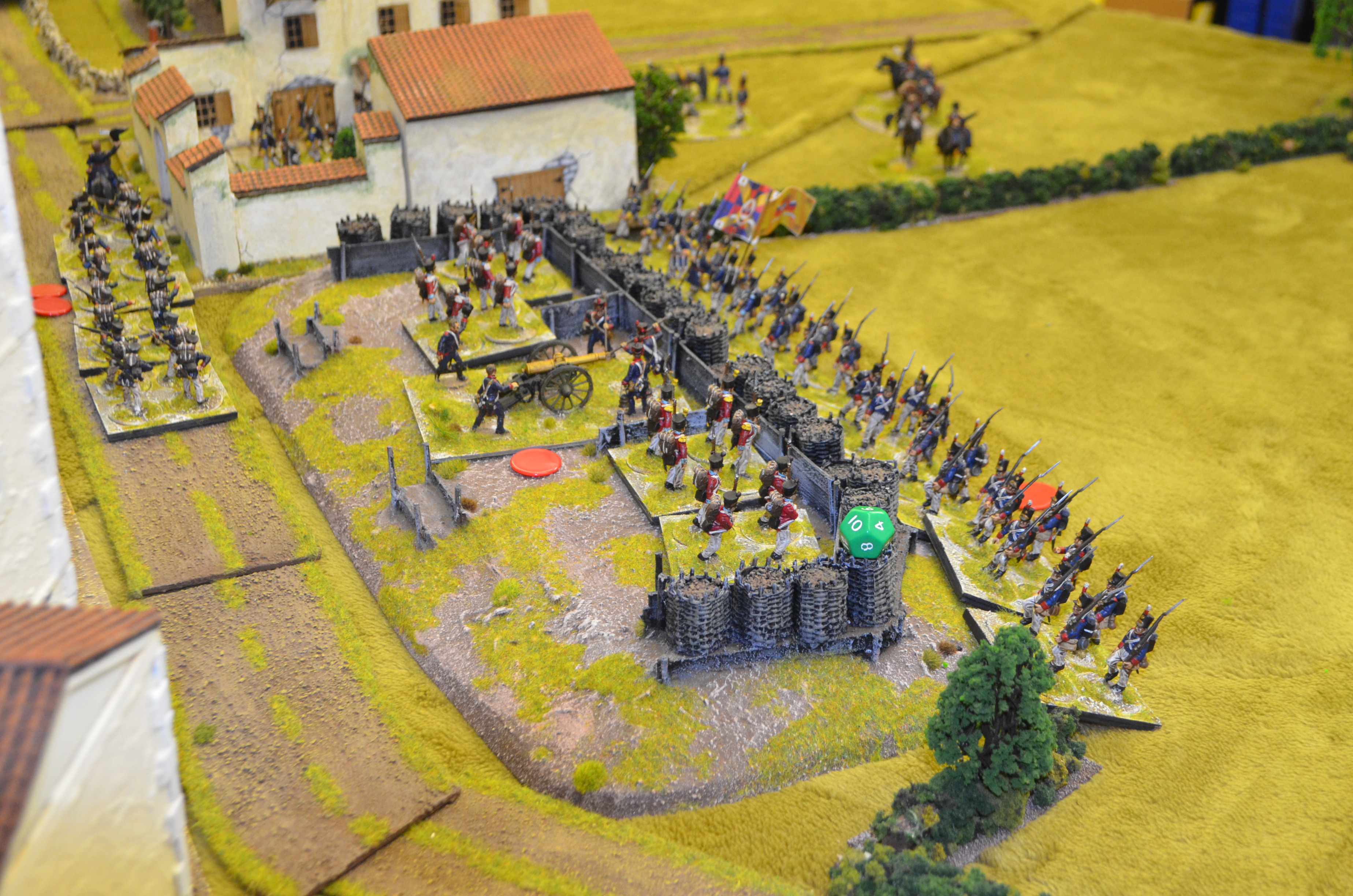 By turn 11 it was obvious the village was going to hold. A victory for Les Frogs !!
Alastairs report (and more pictures) can be found HERE
A great evenings game that could have gone either way.
More soon
ggg
Posted by Eric the Shed at 14:56