Last night we play tested the first of what I am sure will be many games of the excellent Never Mind the Billhooks rule set. These rules are specifically designed for the War of the Roses and were a recent giveaway in the September issue of Wargames Illustrated.

As I said above the rules are excellent and give a wonderful representation of the period. However there are a couple of pointers I would like to add before starting my review and finishing off with the AAR of last nights action.

Firstly these are NOT a rule set for really big battles - if like me and my friends you have well over 1000 painted WOTR figures then you are not going to get them all on the table at the same time. Typical force composition of around 100 figures per player is going to deliver an evenings game.

Secondly a terrain dense table is going to slow the game down enormously. Better to have a few key features than a table crisscrossed in streams, rivers and hedges.

Thirdly and finally this game is packed with various nuances and requires detailed reading of the rulebook. For example a standard commander can order two units (within 6" or attached) and each unit can perform two actions.

In advance of our game I prepared several cards using both the freebie set in the ruleset and my own design for the play cards. Having nobles with their heraldry adds a bit of colour to proceedings and these were knocked up quite quickly on powerpoint, printed off and laminated.

Example of command cards and the backs of cards

In addition I prepped up a whole load of unit cards. These can be used for random force generation.

The numbers on the cards refer to their points value for Levy, Retinue and Veterans.

Finally Archer units in this game have a limited number of arrows so I made up some simple dice trays. The arrows game from the Perry plastic infantry set. As arrows are shot the dice counts downwards. 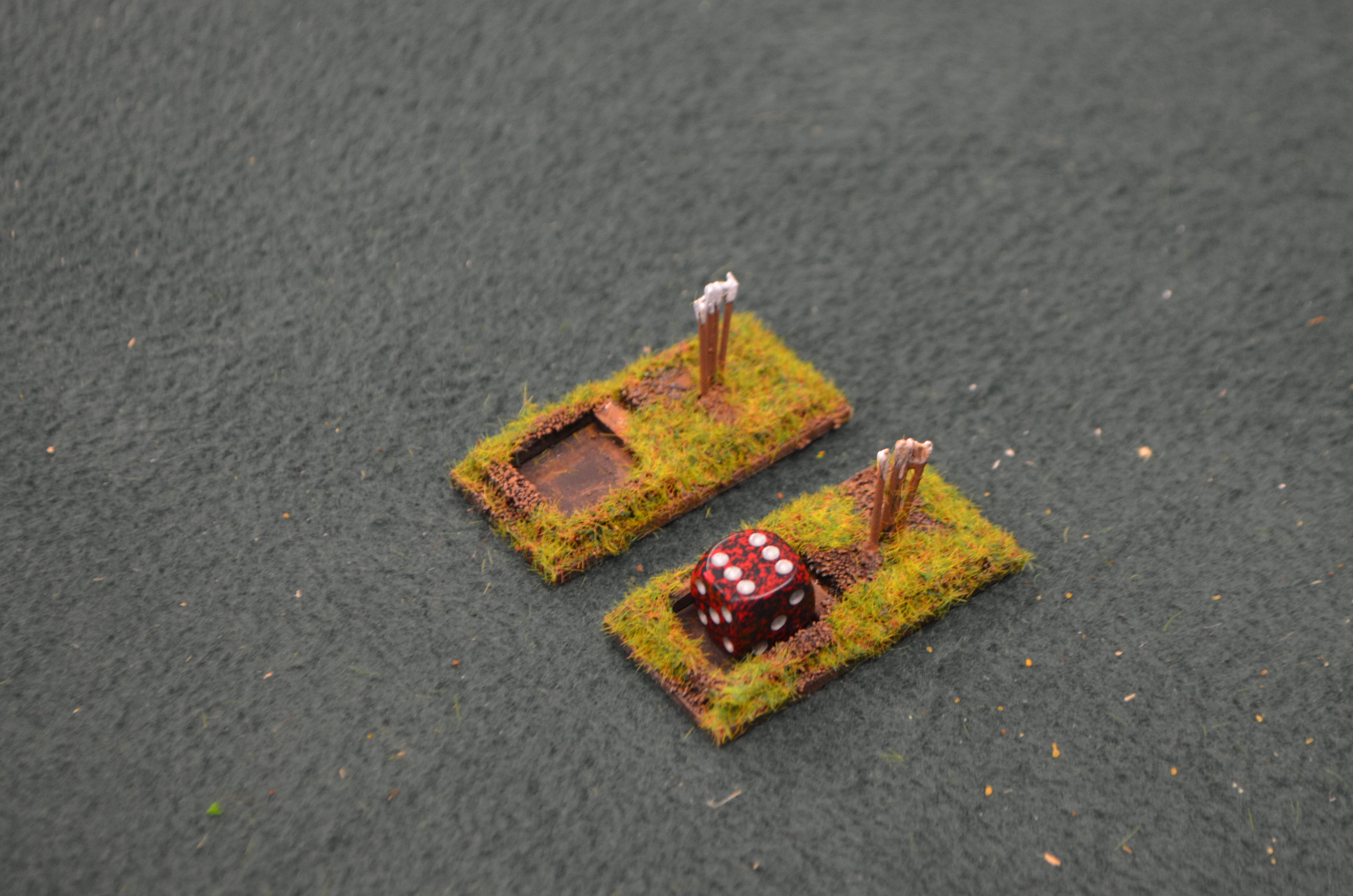 As mentioned a typical force consists of around 100 figures. In advance of our game I notified the players that they could have three commanders and 100 points worth of troops, force composition must adhere to the ruleset (ie 50% units must be bows/bills etc). In addition each player would receive on random unit from the card deck. Were a p[layer to draw a skirmish unit they would receive two such units.

50% of the deck was stacked with Bows and Bills the rest made up of other units.

For my sins I chose the following

My force was commanded by Howard, Earl of Surrey, Mowbray, the Duke of Norfolk and Lord Audley 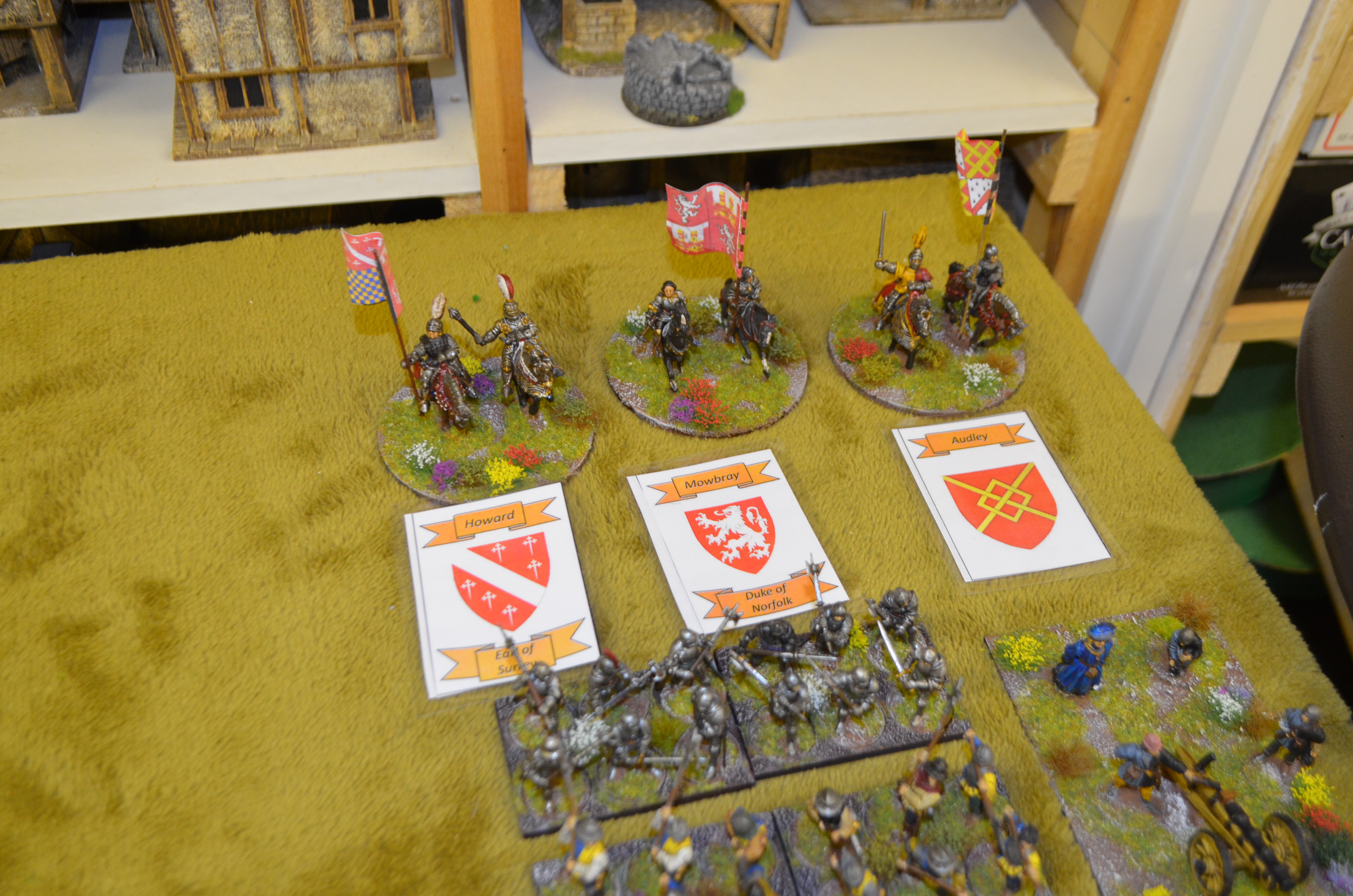 When the players arrived Mark K, Alastair and John we diced off for sides and table position. I woulkd fight with John on the Lancastrian side. Random units were then awarded. Both jOhn and I received extra Archer units and our Yorkist opposition both received Pikes.

The table was a very simple affair (approx 6ft x 8ft) with a crossroads slapped bang in the middle. Each force could deploy in the own quadrant. A few buildings, woods and hedges around the edges adorned the field. 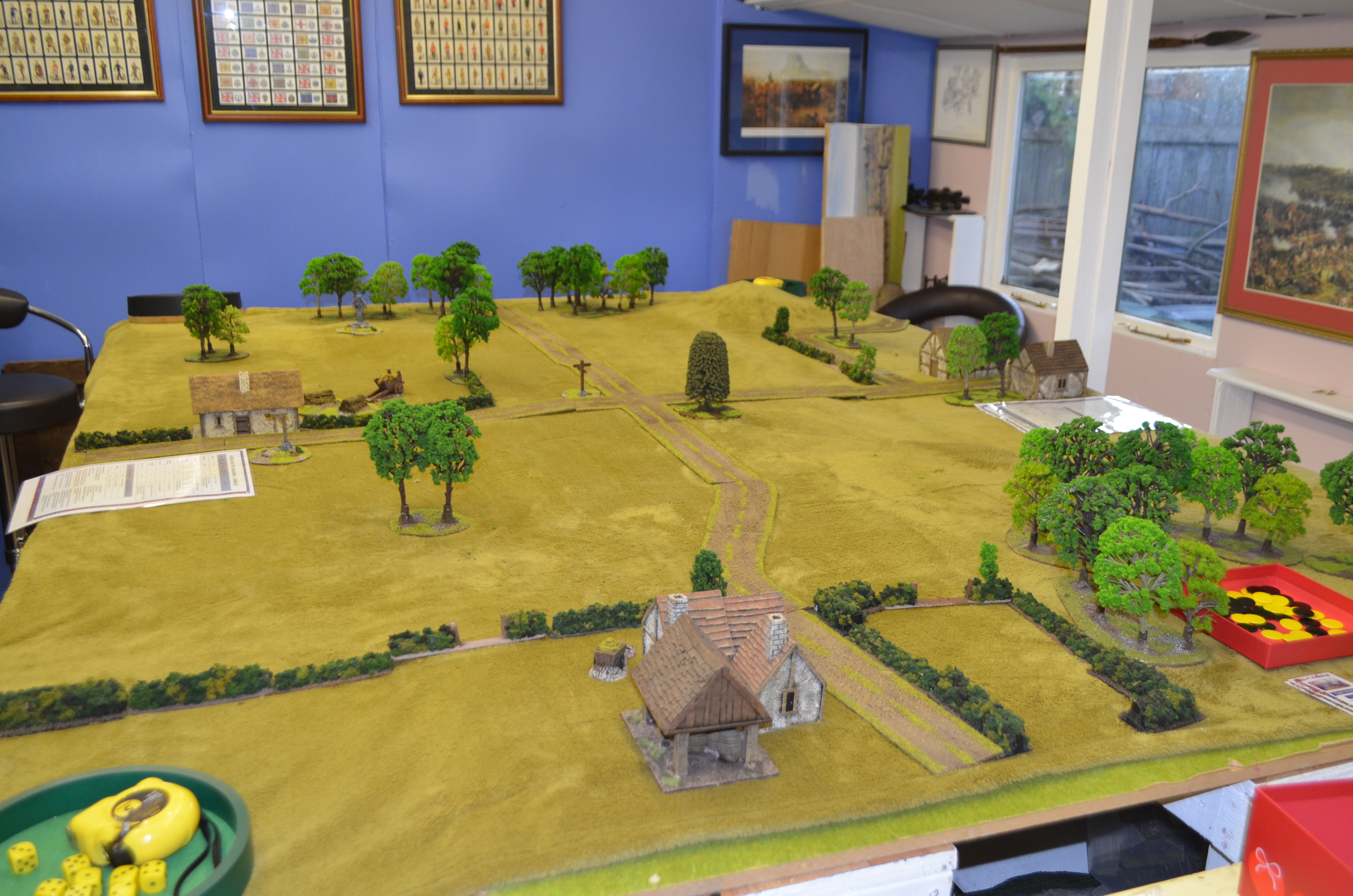 The Lancastrians would start on the left, Yorkists on the right. Only one area of high ground in top right of picture.

Picture below from opposite direction 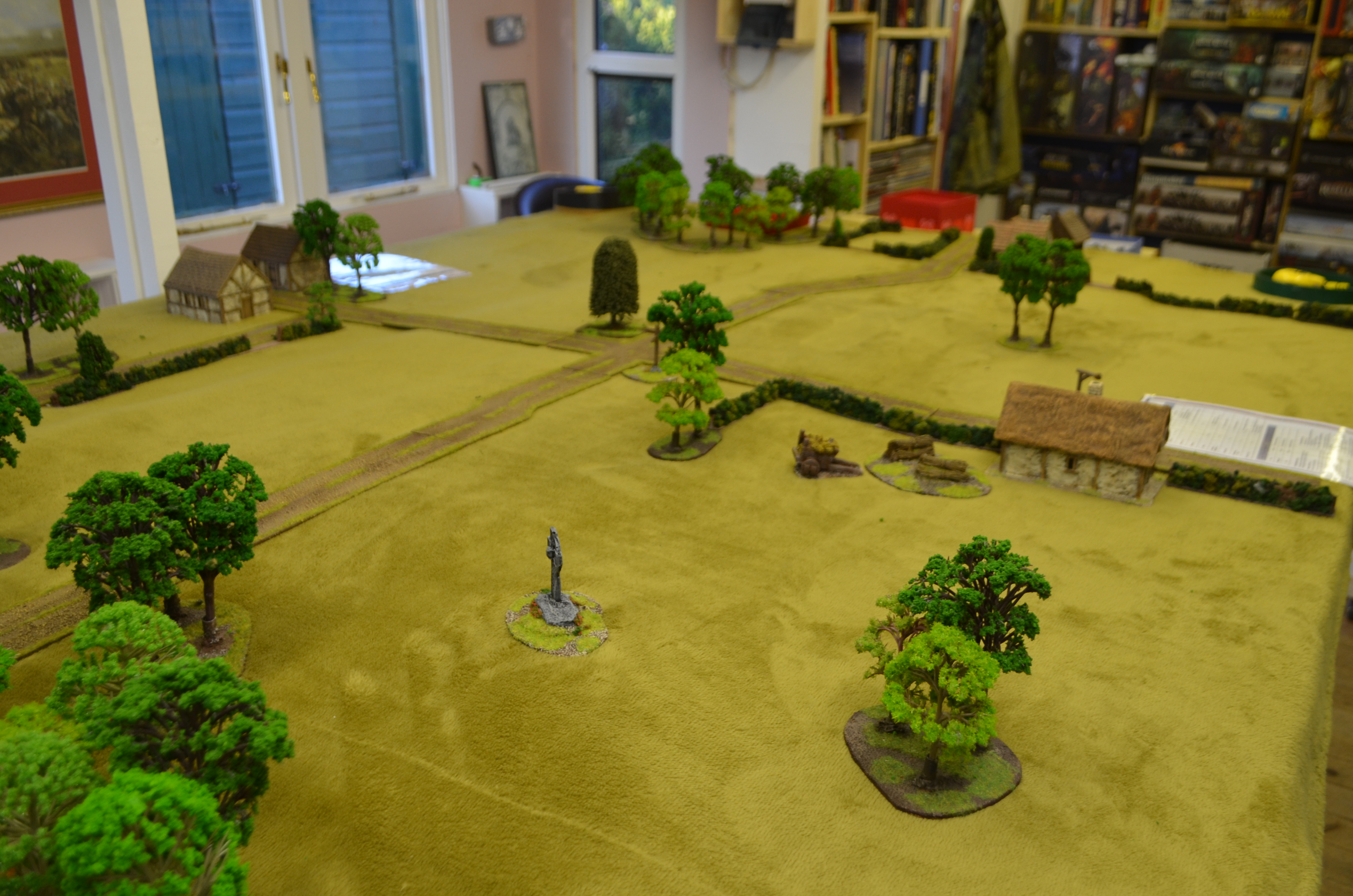 We used tiddlywinks for counters  - black for daunted, yellow for disarray, red & white for morale tokens and silver to show unit activations, The last one is very important and can be crucial for units that have not moved during the turn.

We took it in turn to lay wards and their commanders and then diced off to start the game. My forces were eager to push forward in the maneuver phase. Rather cleverly the game has two distinct passages of play, in the first each player takes it in turn to move a unit/commander and once either combat initiates or shots are fired we moved to a card activation sequence.

It is criucial to note here that you need to keep your commanders moving otherwise units fall out of command range if the game in earnest starts and as both sides in the field had artillery pieces in play it could kick off quite quickly. 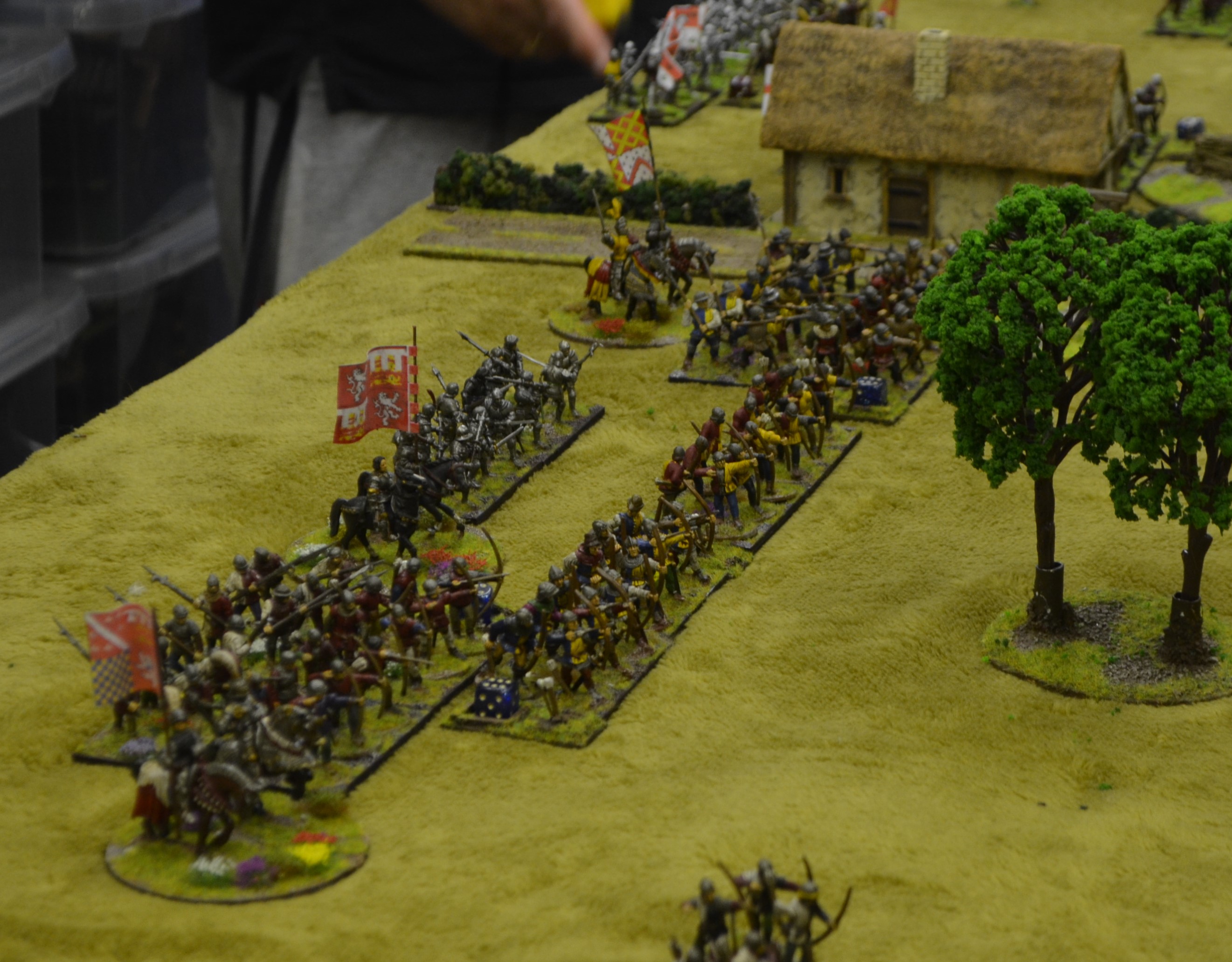 The Lancastrians mass to move forward

and in the distance the Neville family (York) - note the artillery piece on the far hill.

...and then the Yorkists opened fire with their cannon from the Hill at Fitzalan (Johns troops), Dice were rolled - a groan three ones. The Yorkist cannon exploded first shot.
Very amusing the Lancastrians thought and they opened up their own barrage ...dice were rolled...four ones...the second cannon exploded. This was going to be fun. Two shots fired and both guns a pile of brass and iron. 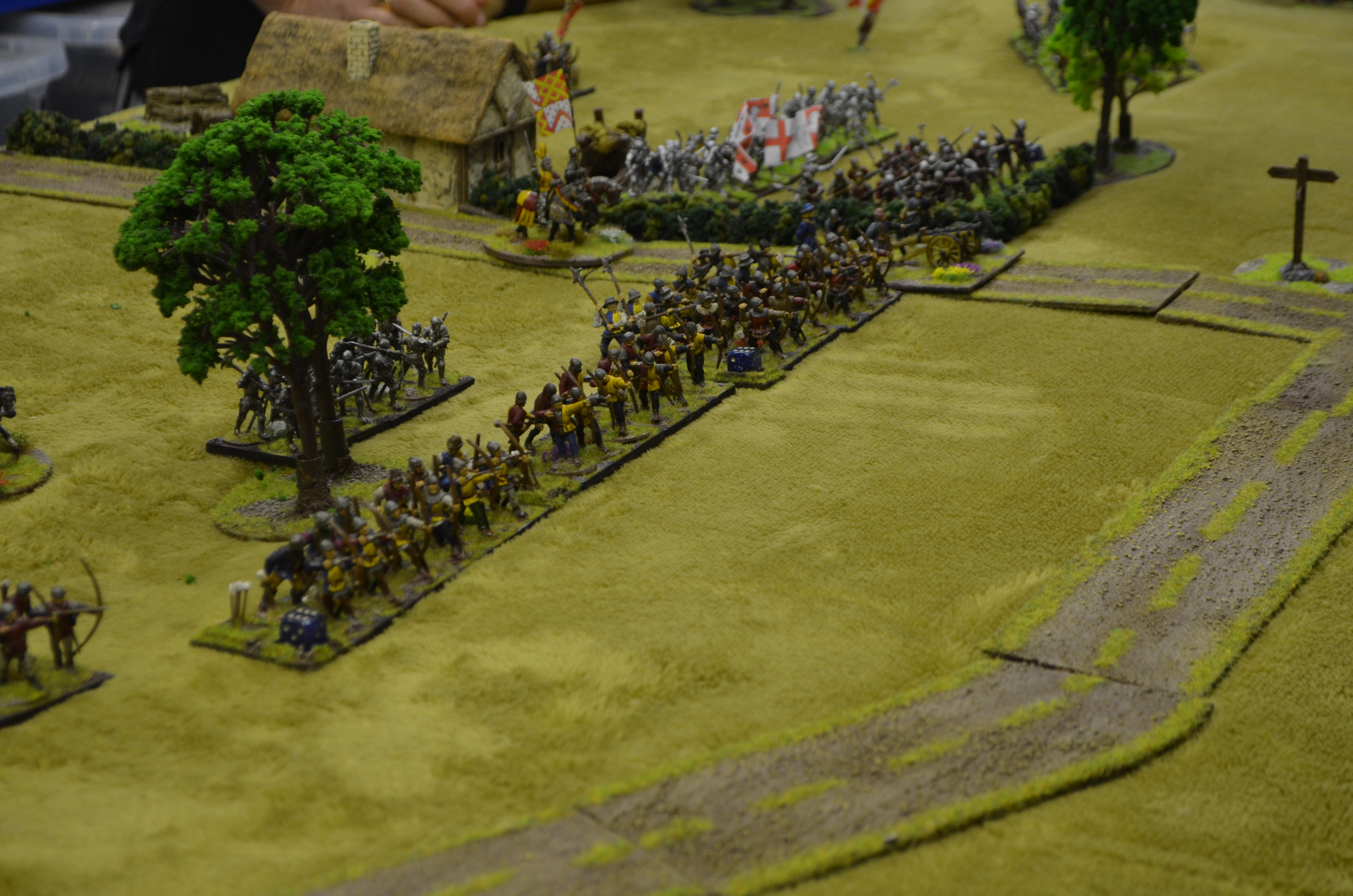 With no artillery support available to either side the massed ranks edged forward. Archery fire was traded at long range with sixes required to hit. A few casualties but nothing to write home about.

On my side of the table Alastair's troops out-bowed stayed just outside close range of my bows, fearing a shower of arrows. Whist on the far side Johns forces (Lancs) were having a tough time dealing with some pesky handgunners and units of bill and bow. Indeed by midway honours were with the Yorkist side.

With the flanks taking centre stage for the time being our centres faced off against each other. 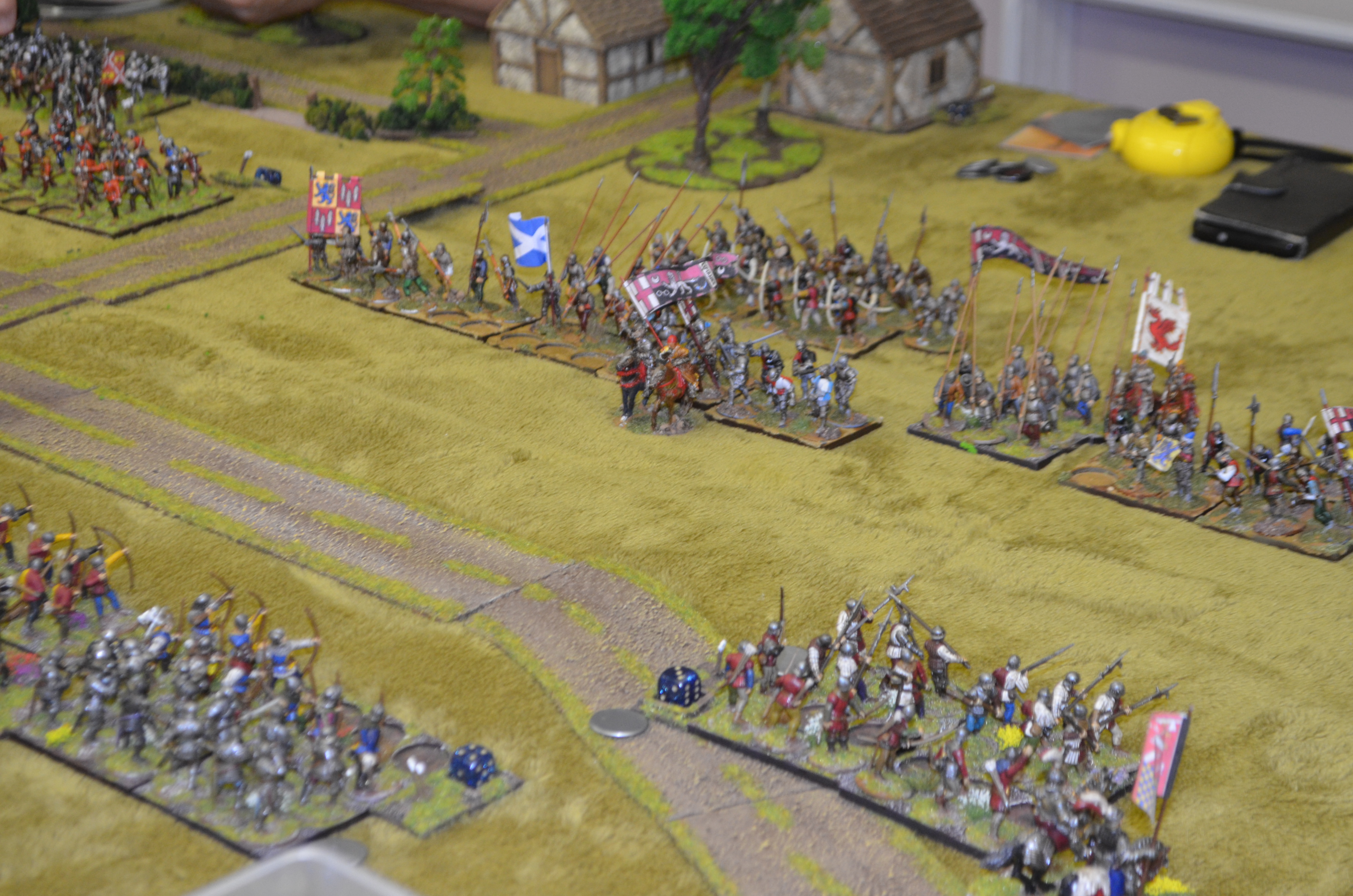 This was going to be attritional or so we thought.... 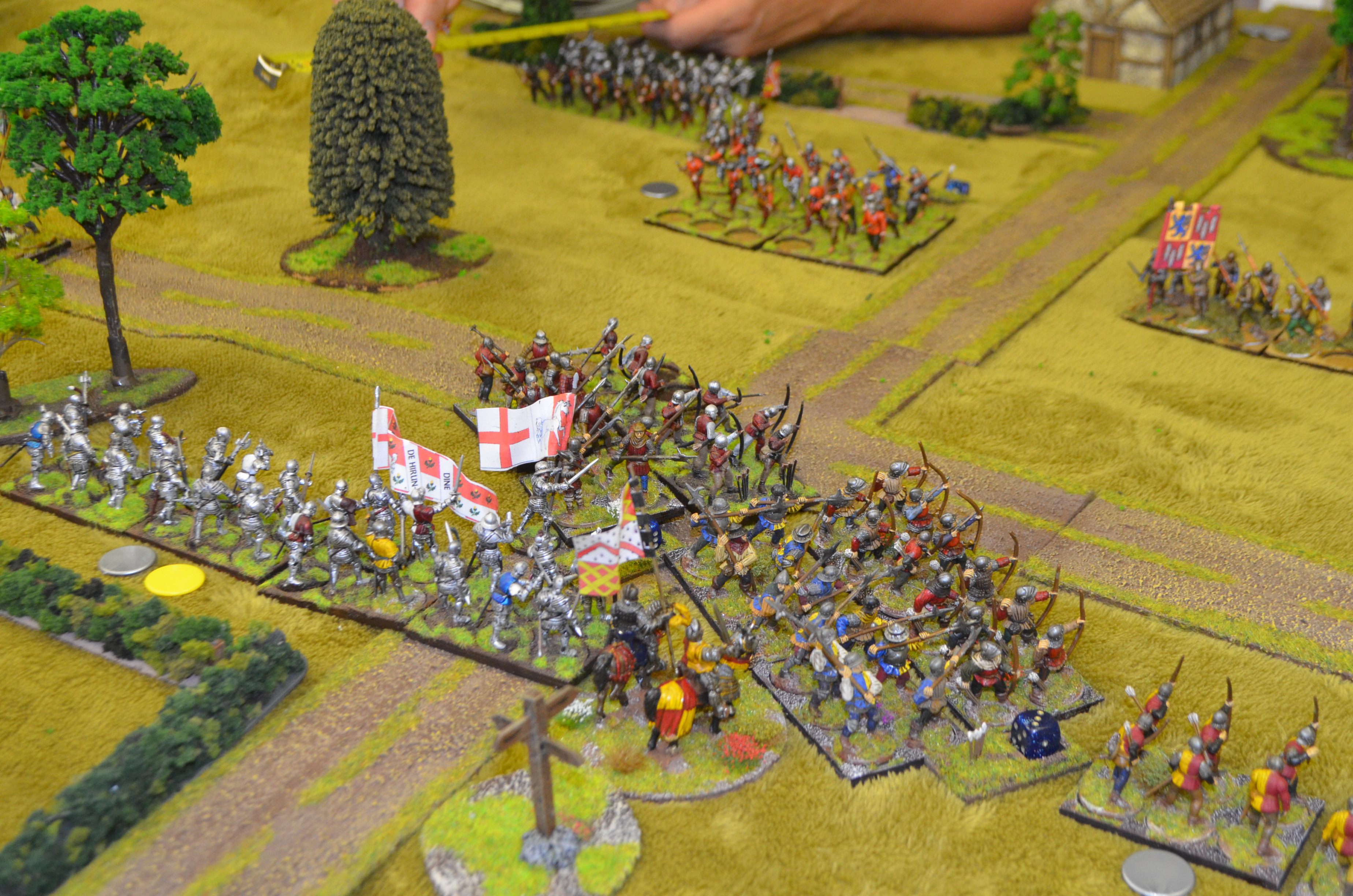 Things were going well on the Yorkist right flank and the Lancastrians were in danger of being turned. A flurry of combats started to edge the Lancastrian way over on the left flank and slowly the game turned.

A unit of troops under Surrey pushed forward on the right quickly routing bows and bills under Percy.

It was now time to start whittling down the Yorkist centre with arrow storms. These had a particularly nasty affect on some Bill and Pike units 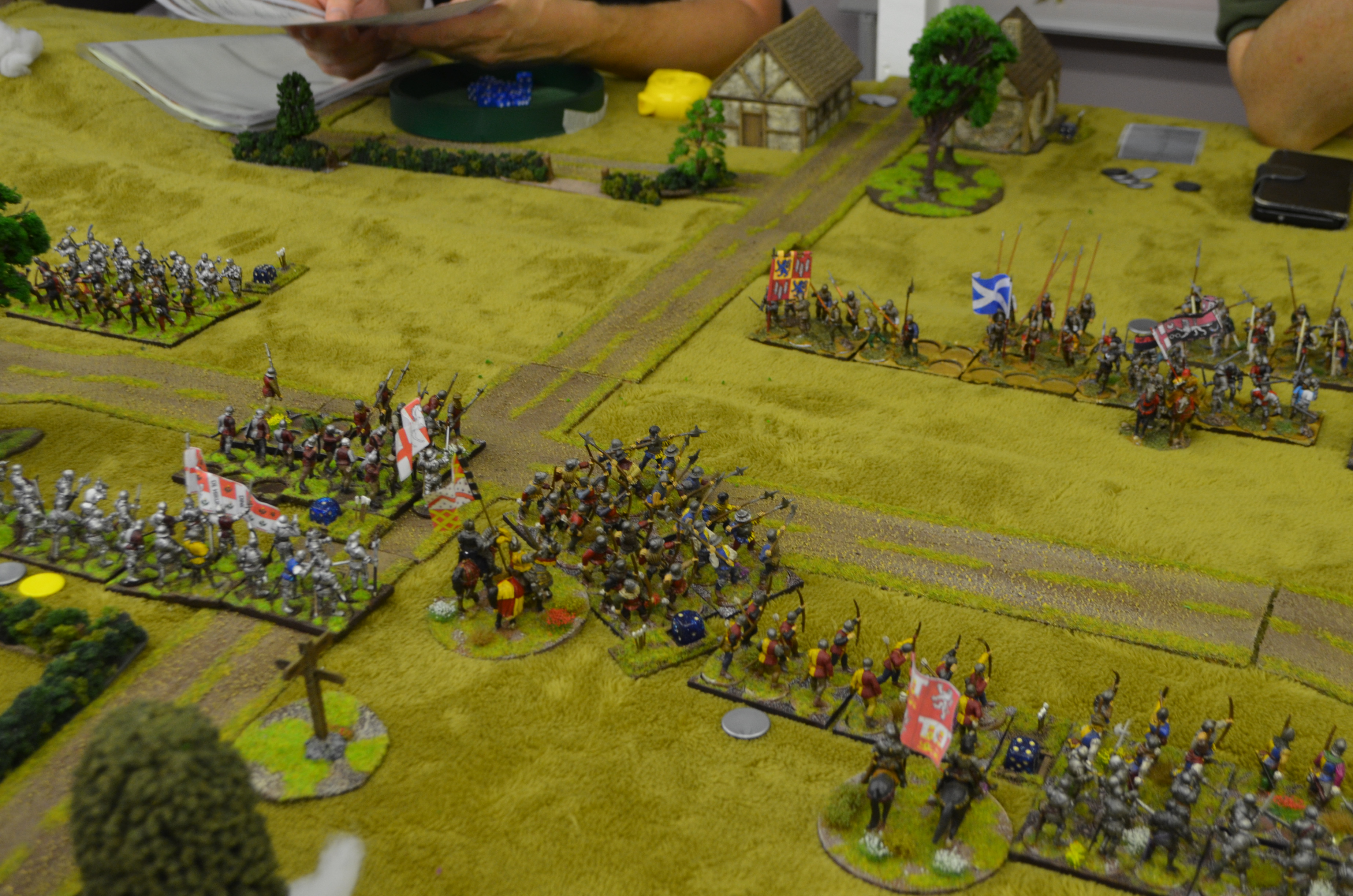 More Yorkists fell to the Lancastrian bows...Alastair had a choice advance and take more fire or sit and hold tight. He stayed rooted to the spot as commands failed to fall in his favour.

Frustrated with this inactivity Lord Rutherglen sent forward his tin cans. I let rip with the last of my arrows - five men at arms dropped. More men fell to a second volley. 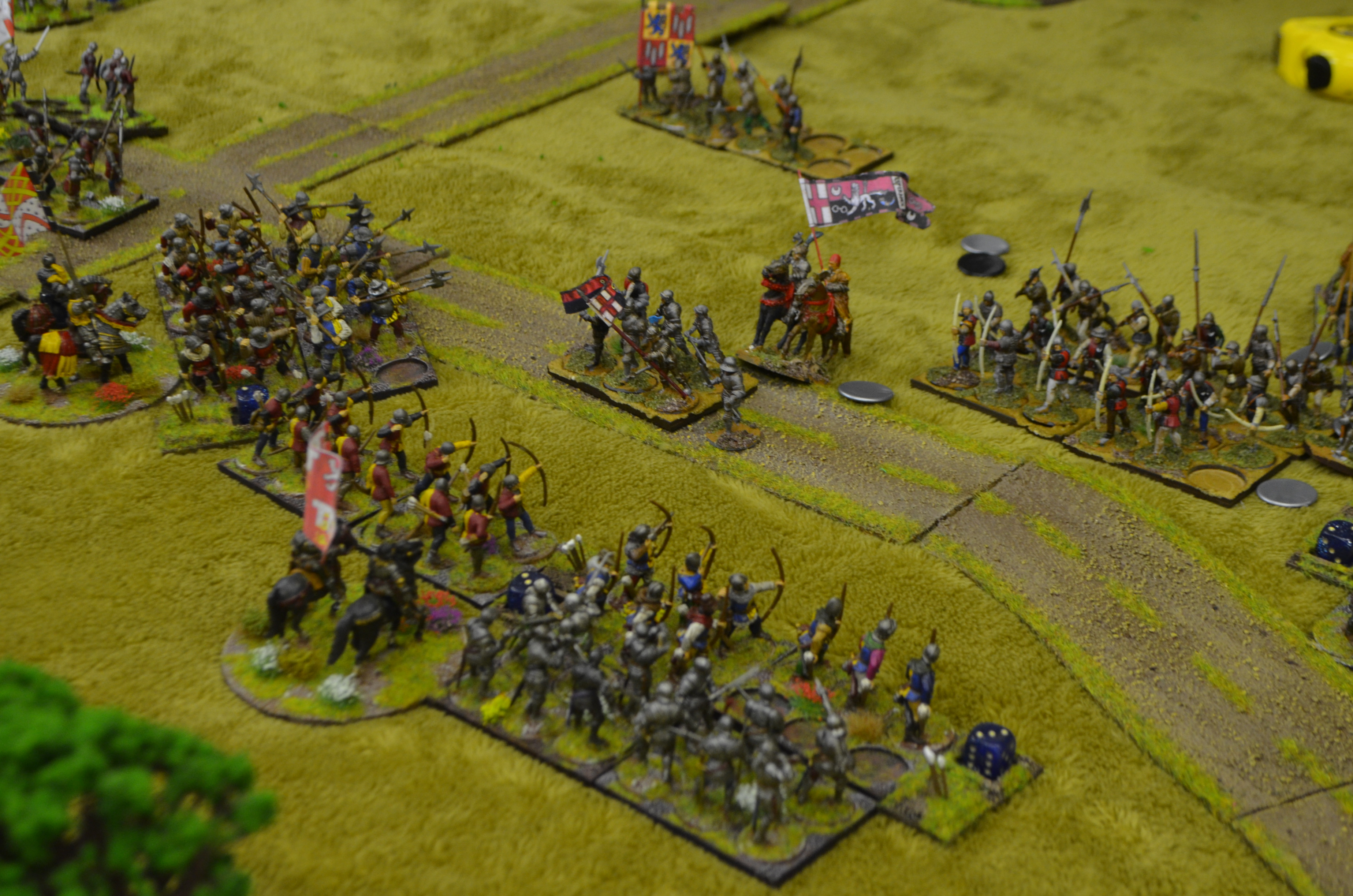 The next card up was a bonus card which called for a special event. Treachery - the Lancastrians won the dice off and were able to turn the allegiance of a leaderless men at arms unit. This unit crashed into the bows in front of them routing them and friends in the vicinity. 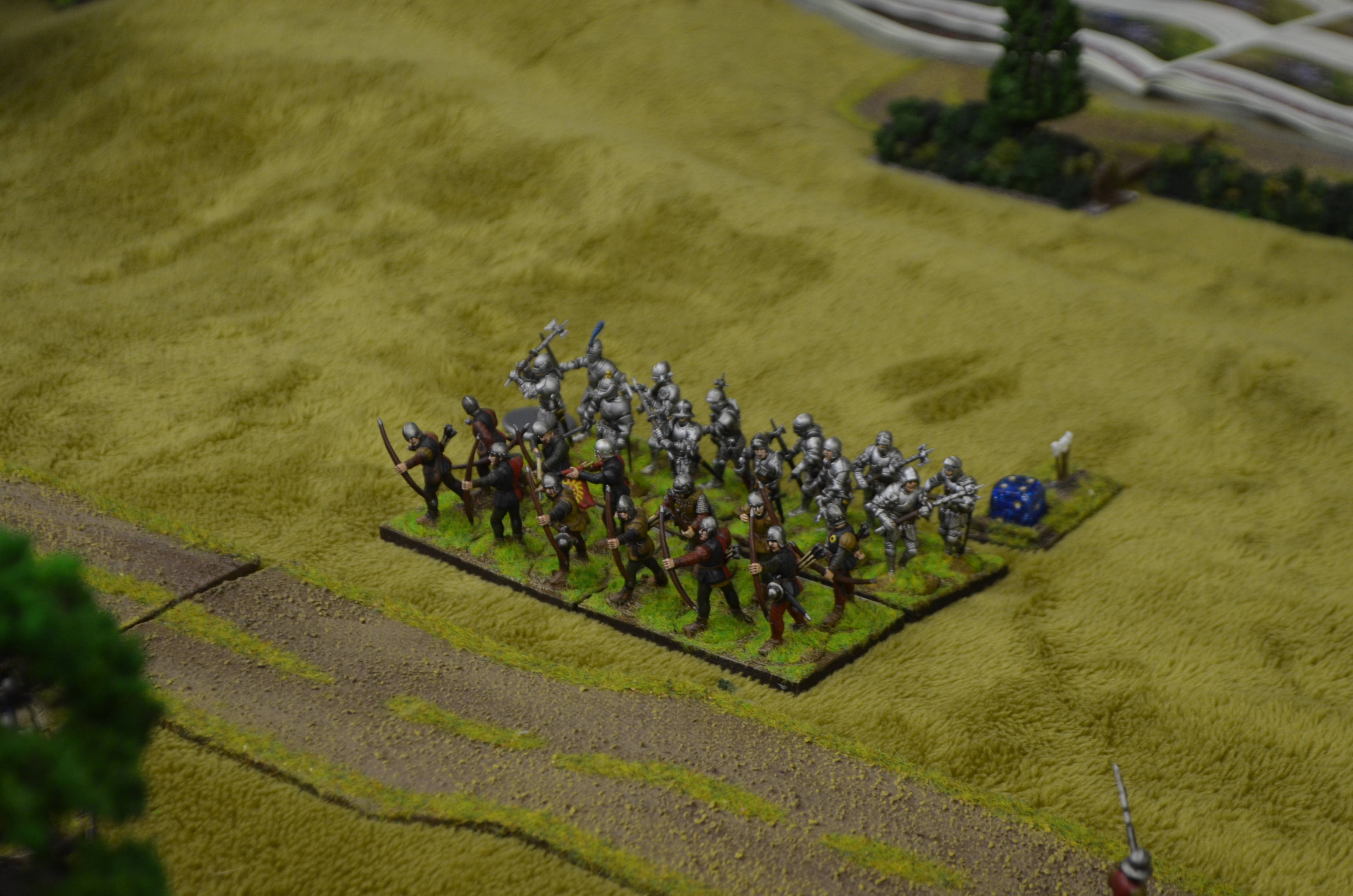 It was all over...a Lancastrian Victory for Eric the Shed and John - Huzzah

Footnote: Apparently only two special event cards should have been played in the game. We used three, the third being the treachery card. I doubt this would have made a difference (says the victor and author of this blog).

A cracking game and one that we will play again very soon..